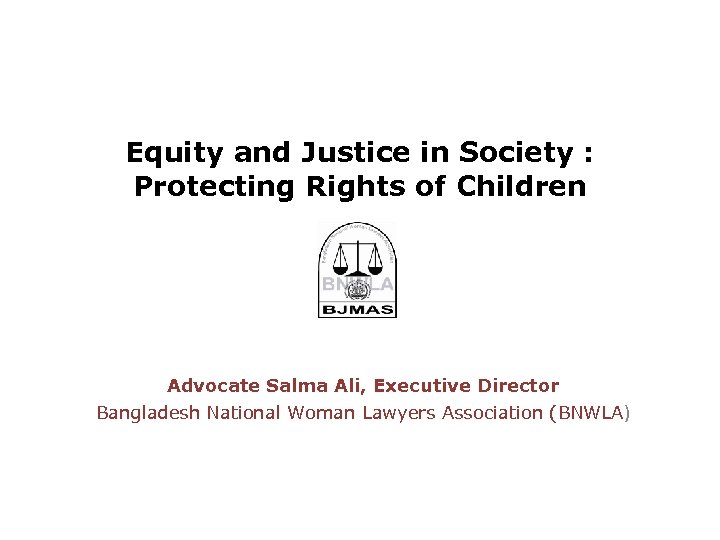 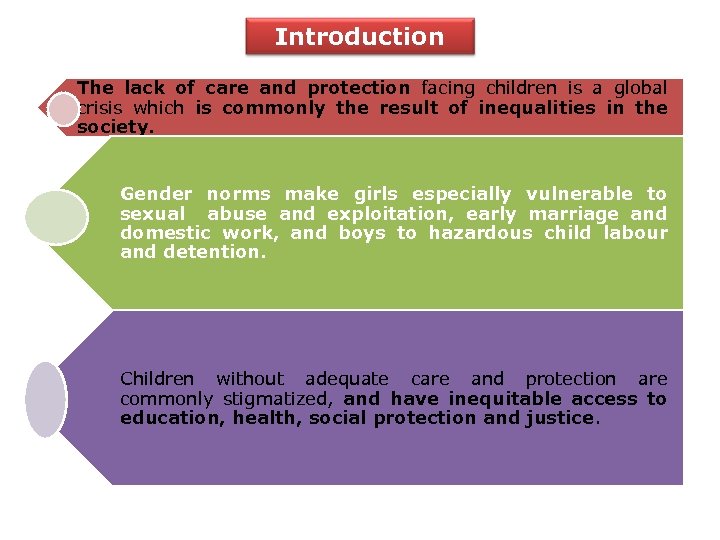 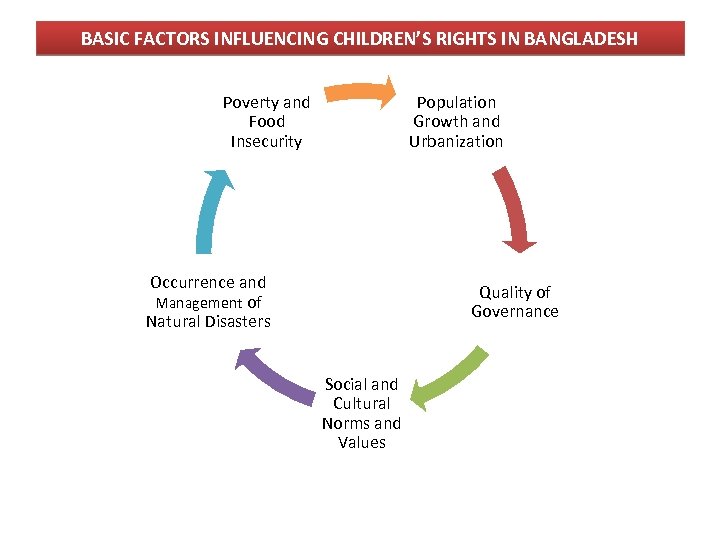 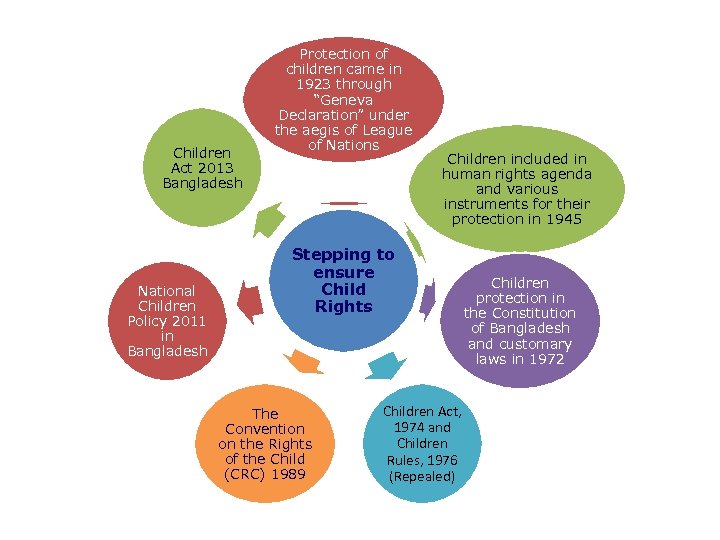 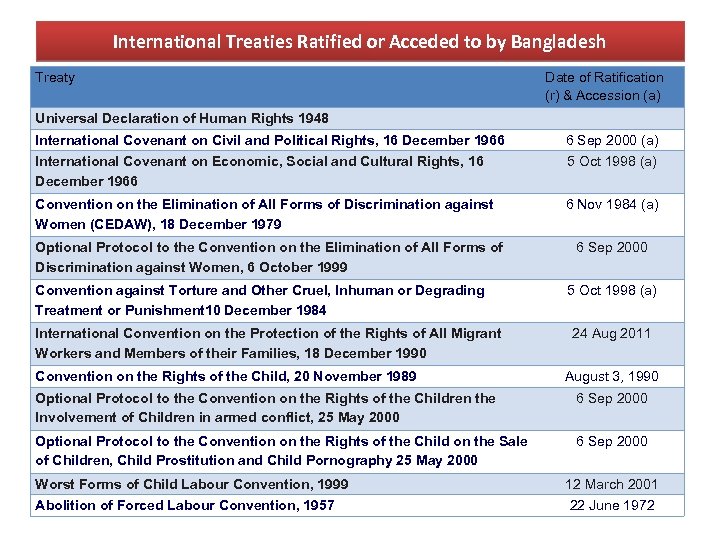 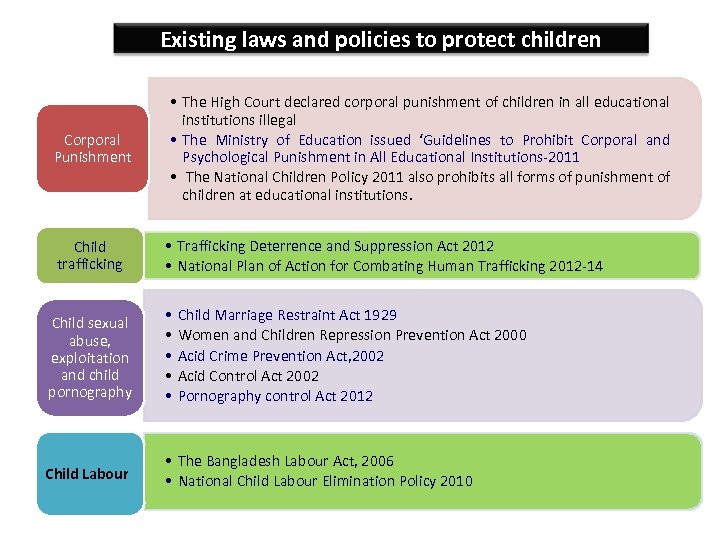 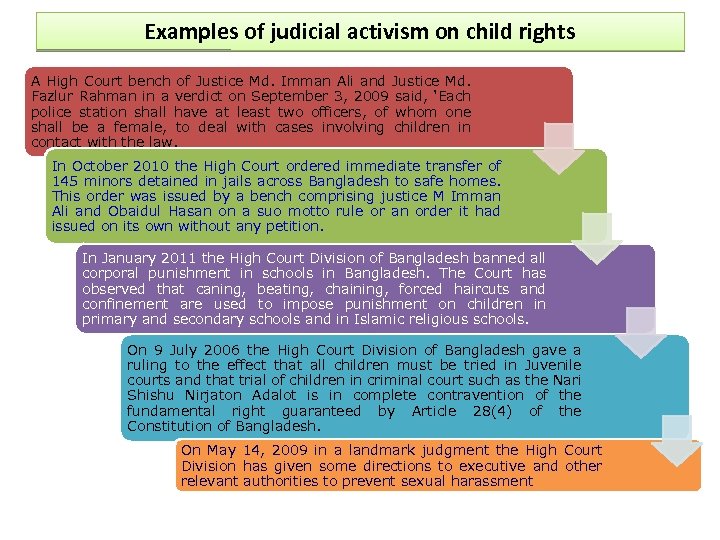 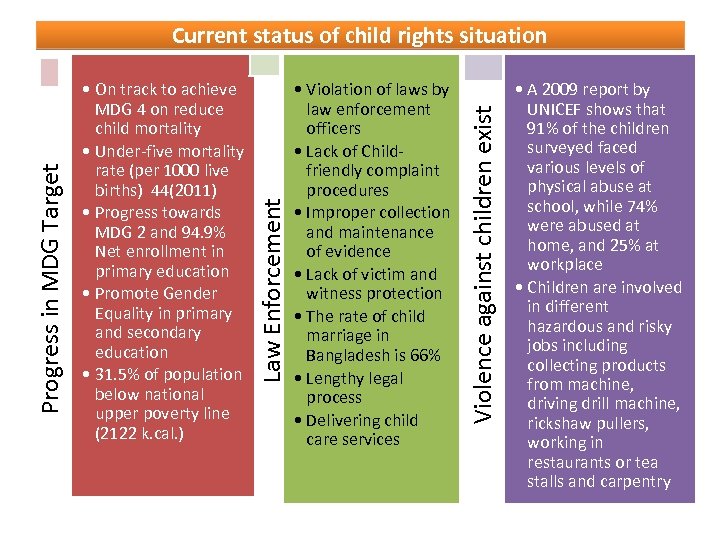 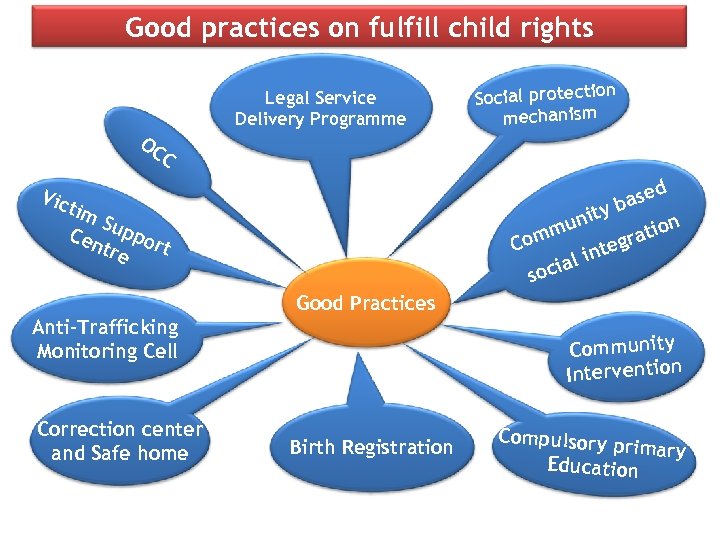 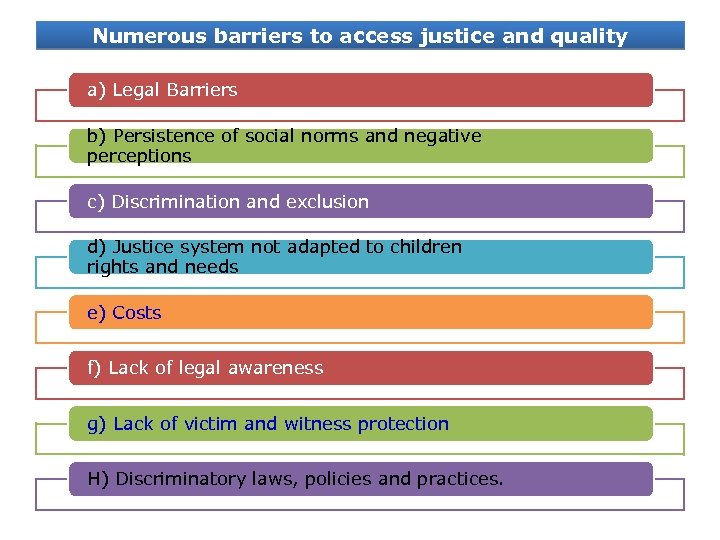 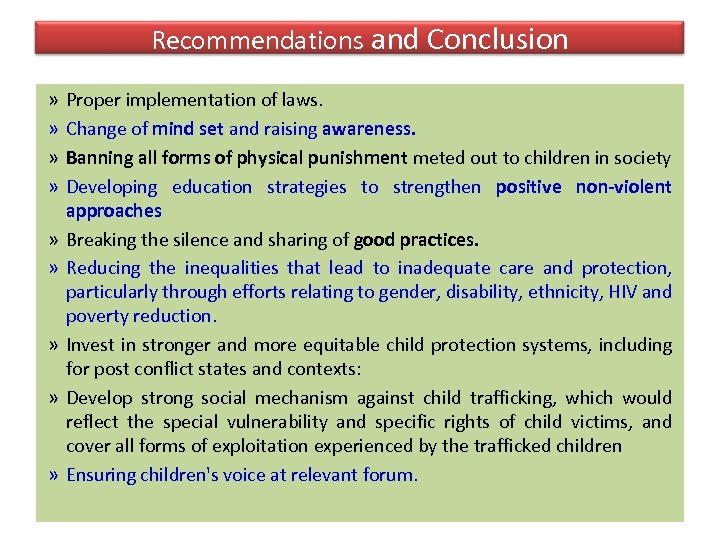 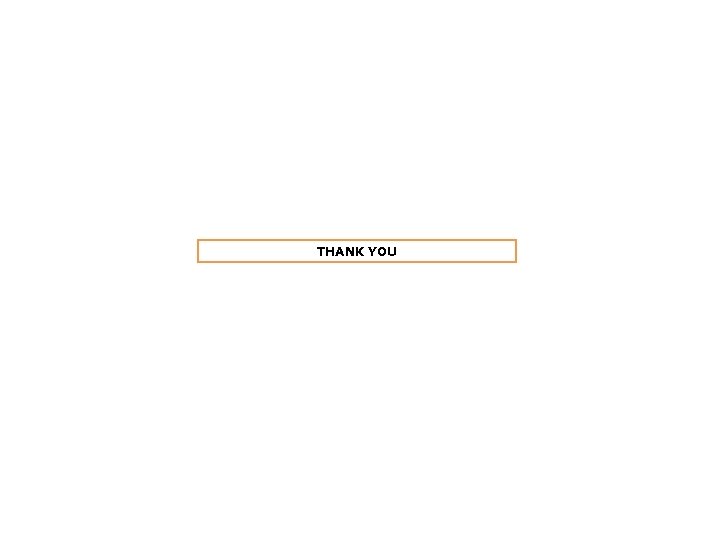 Introduction The lack of care and protection facing children is a global crisis which is commonly the result of inequalities in the society. Gender norms make girls especially vulnerable to sexual abuse and exploitation, early marriage and domestic work, and boys to hazardous child labour and detention. Children without adequate care and protection are commonly stigmatized, and have inequitable access to education, health, social protection and justice.

Children Act 2013 Bangladesh National Children Policy 2011 in Bangladesh Protection of children came in 1923 through “Geneva Declaration” under the aegis of League of Nations Children included in human rights agenda and various instruments for their protection in 1945 Stepping to ensure Child Rights The Convention on the Rights of the Child (CRC) 1989 Children Act, 1974 and Children Rules, 1976 (Repealed) Children protection in the Constitution of Bangladesh and customary laws in 1972

Examples of judicial activism on child rights A High Court bench of Justice Md. Imman Ali and Justice Md. Fazlur Rahman in a verdict on September 3, 2009 said, ‘Each police station shall have at least two officers, of whom one shall be a female, to deal with cases involving children in contact with the law. In October 2010 the High Court ordered immediate transfer of 145 minors detained in jails across Bangladesh to safe homes. This order was issued by a bench comprising justice M Imman Ali and Obaidul Hasan on a suo motto rule or an order it had issued on its own without any petition. In January 2011 the High Court Division of Bangladesh banned all corporal punishment in schools in Bangladesh. The Court has observed that caning, beating, chaining, forced haircuts and confinement are used to impose punishment on children in primary and secondary schools and in Islamic religious schools. On 9 July 2006 the High Court Division of Bangladesh gave a ruling to the effect that all children must be tried in Juvenile courts and that trial of children in criminal court such as the Nari Shishu Nirjaton Adalot is in complete contravention of the fundamental right guaranteed by Article 28(4) of the Constitution of Bangladesh. On May 14, 2009 in a landmark judgment the High Court Division has given some directions to executive and other relevant authorities to prevent sexual harassment

• Violation of laws by law enforcement officers • Lack of Childfriendly complaint procedures • Improper collection and maintenance of evidence • Lack of victim and witness protection • The rate of child marriage in Bangladesh is 66% • Lengthy legal process • Delivering child care services Violence against children exist • On track to achieve MDG 4 on reduce child mortality • Under-five mortality rate (per 1000 live births) 44(2011) • Progress towards MDG 2 and 94. 9% Net enrollment in primary education • Promote Gender Equality in primary and secondary education • 31. 5% of population below national upper poverty line (2122 k. cal. ) Law Enforcement Progress in MDG Target Current status of child rights situation • A 2009 report by UNICEF shows that 91% of the children surveyed faced various levels of physical abuse at school, while 74% were abused at home, and 25% at workplace • Children are involved in different hazardous and risky jobs including collecting products from machine, driving drill machine, rickshaw pullers, working in restaurants or tea stalls and carpentry

Recommendations and Conclusion » » » » Proper implementation of laws. Change of mind set and raising awareness. Banning all forms of physical punishment meted out to children in society Developing education strategies to strengthen positive non-violent approaches Breaking the silence and sharing of good practices. Reducing the inequalities that lead to inadequate care and protection, particularly through efforts relating to gender, disability, ethnicity, HIV and poverty reduction. Invest in stronger and more equitable child protection systems, including for post conflict states and contexts: Develop strong social mechanism against child trafficking, which would reflect the special vulnerability and specific rights of child victims, and cover all forms of exploitation experienced by the trafficked children Ensuring children's voice at relevant forum.