ENHANCING SYNERGIES AMONG THE BASEL ROTTERDAM AND STOCKHOLM 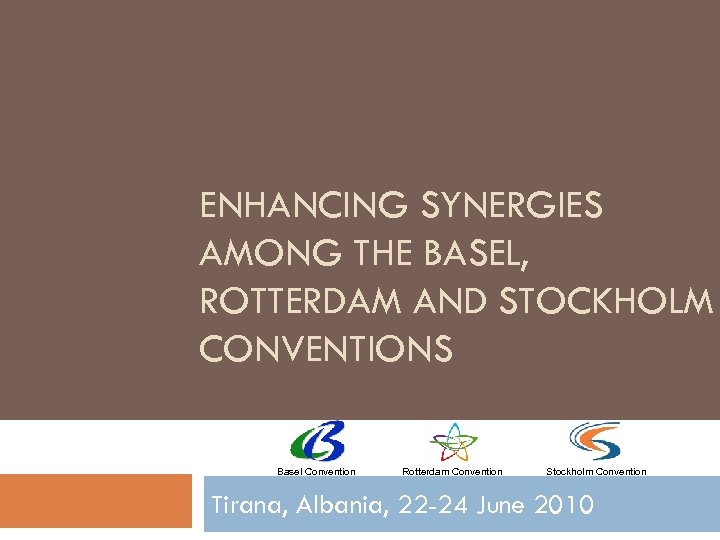 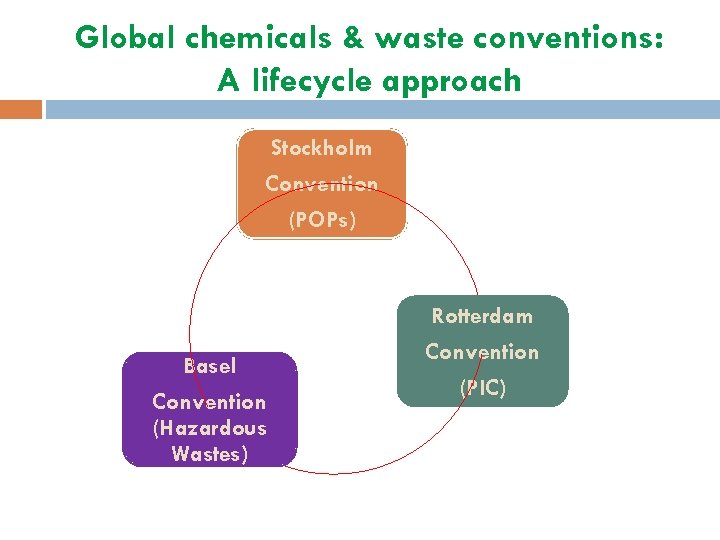 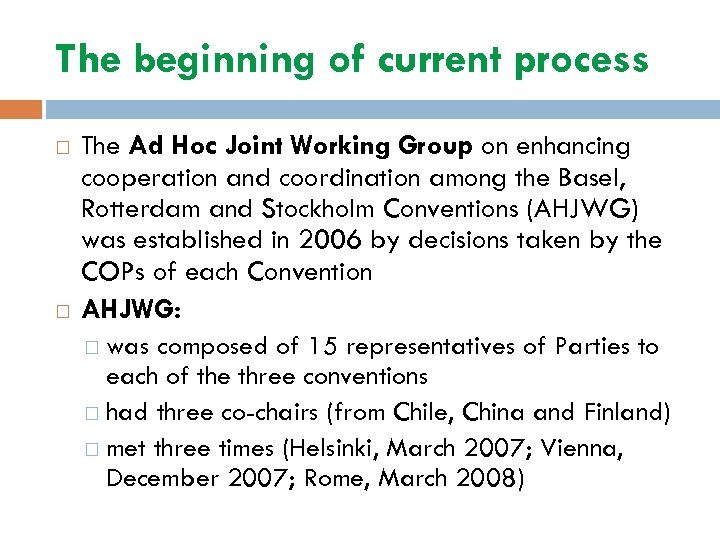 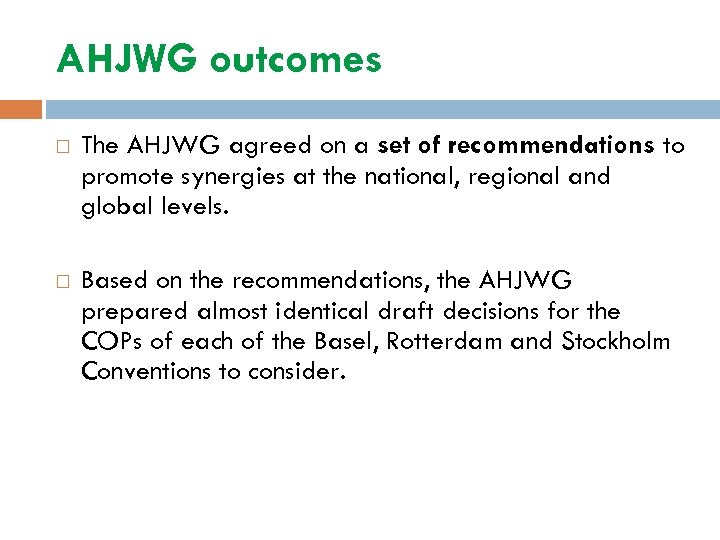 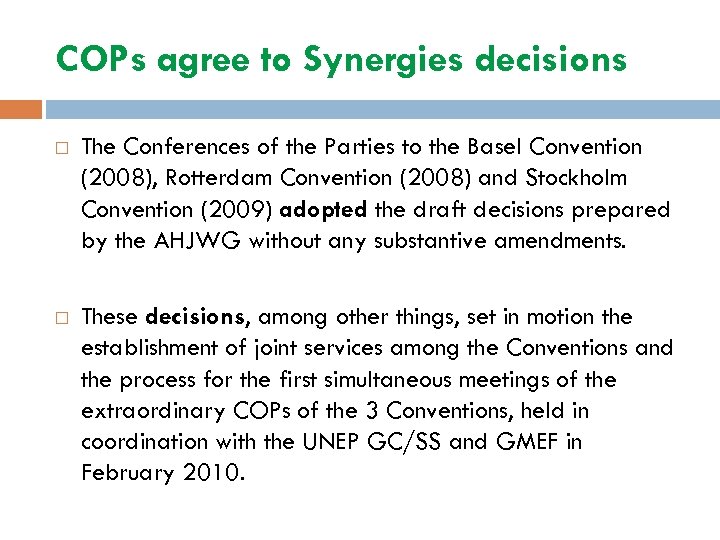 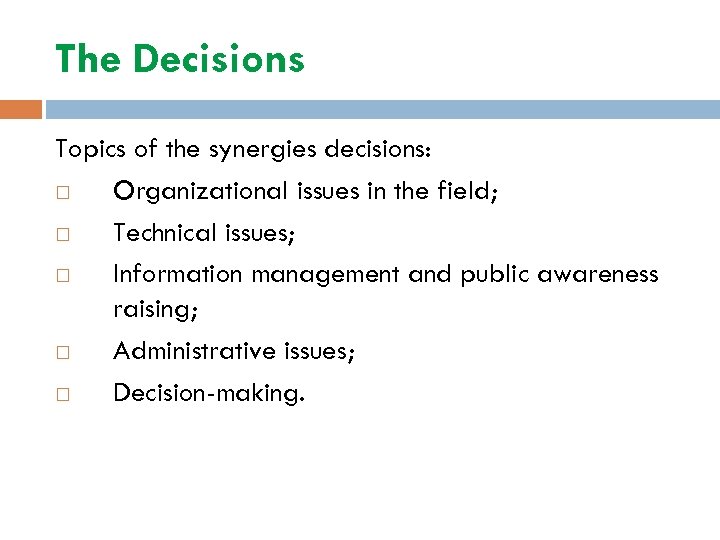 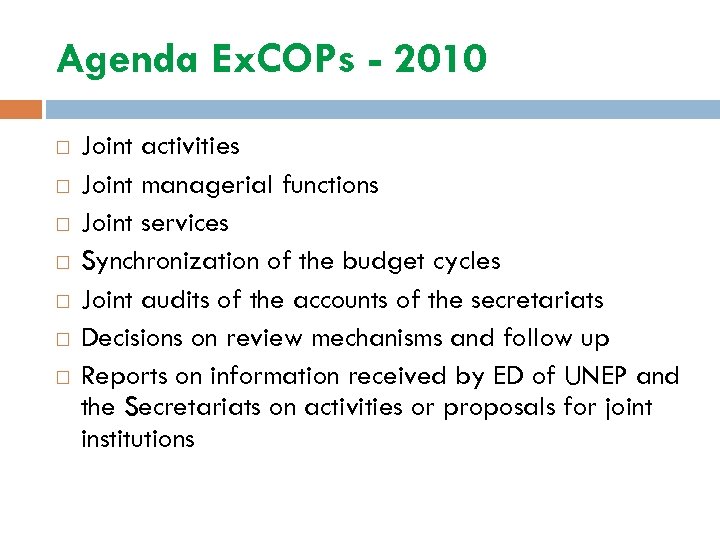 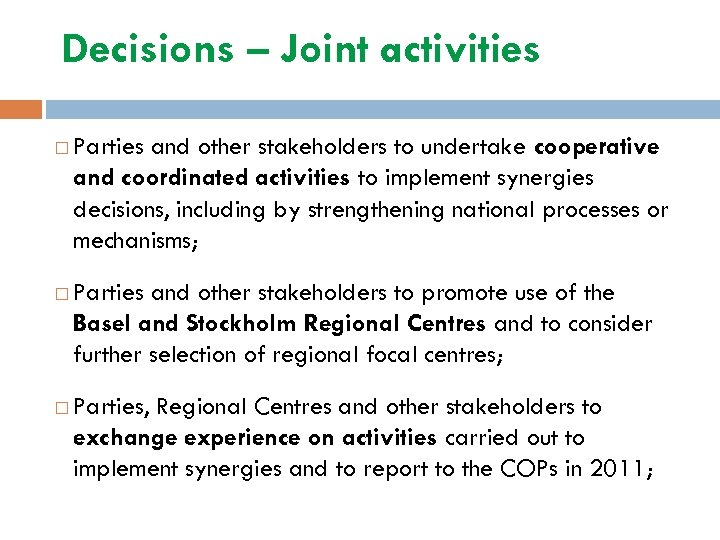 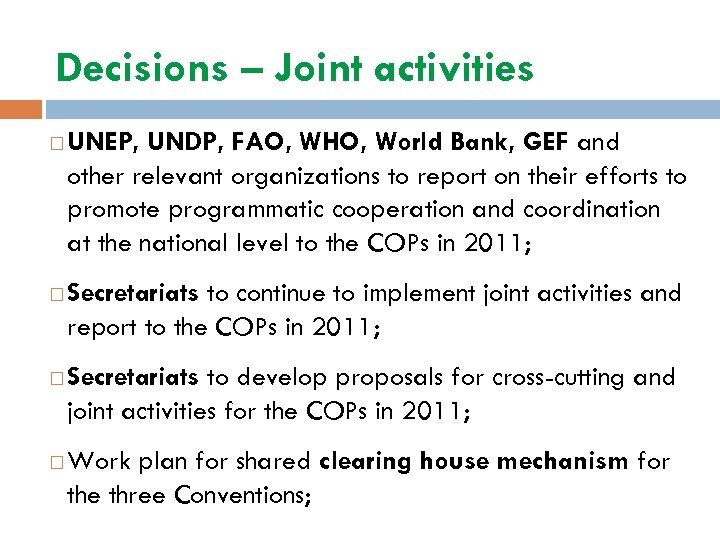 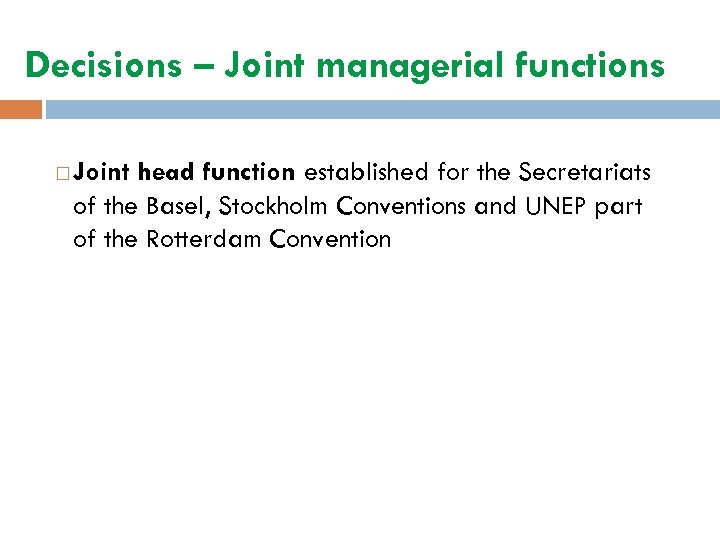 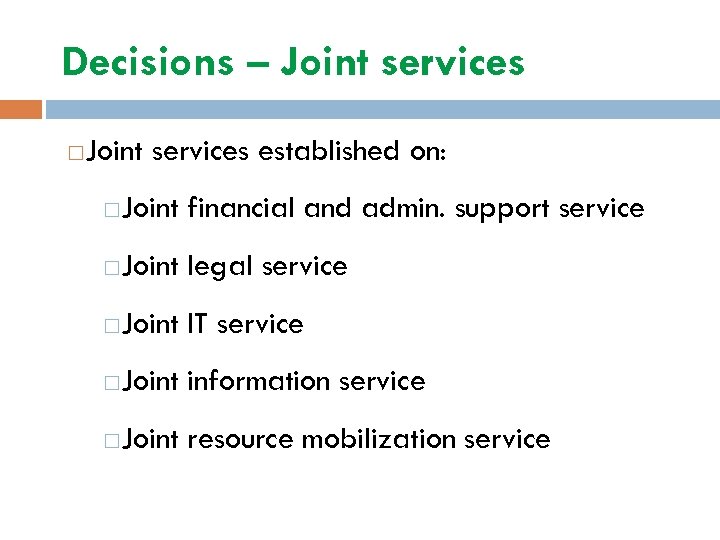 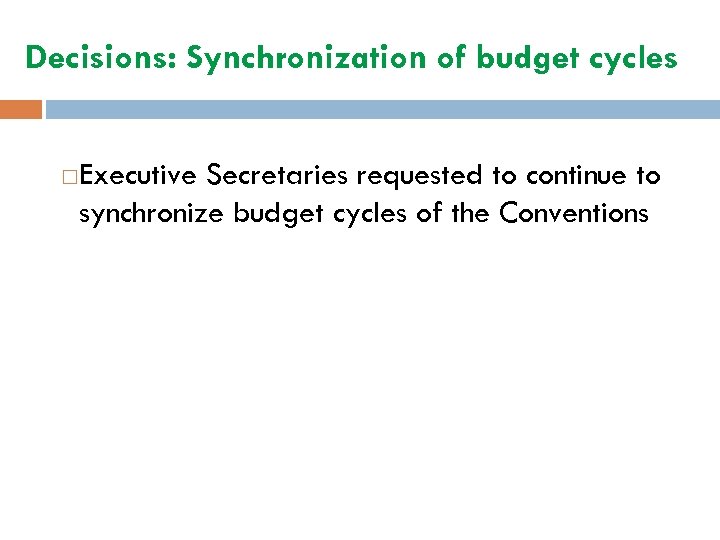 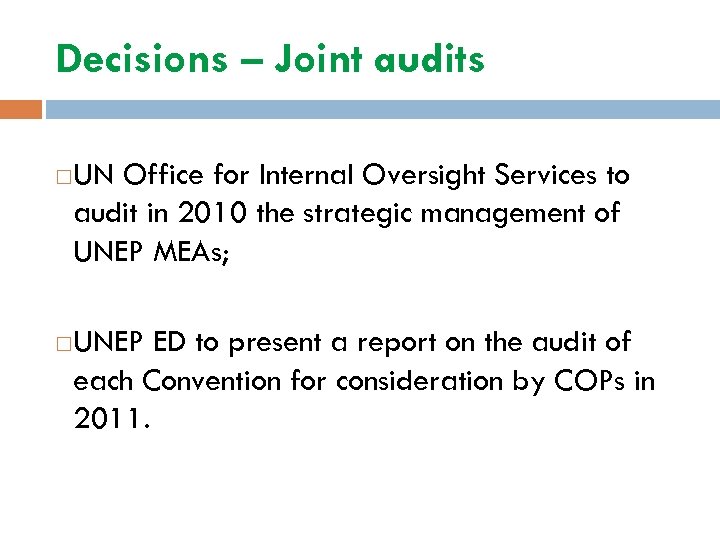 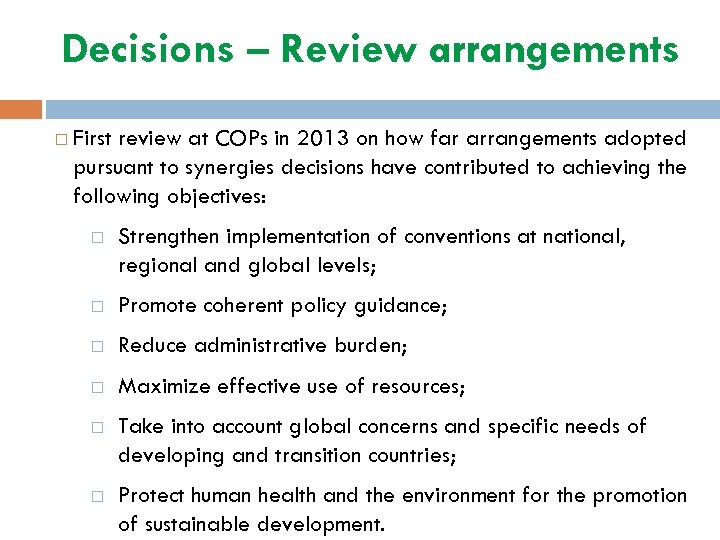 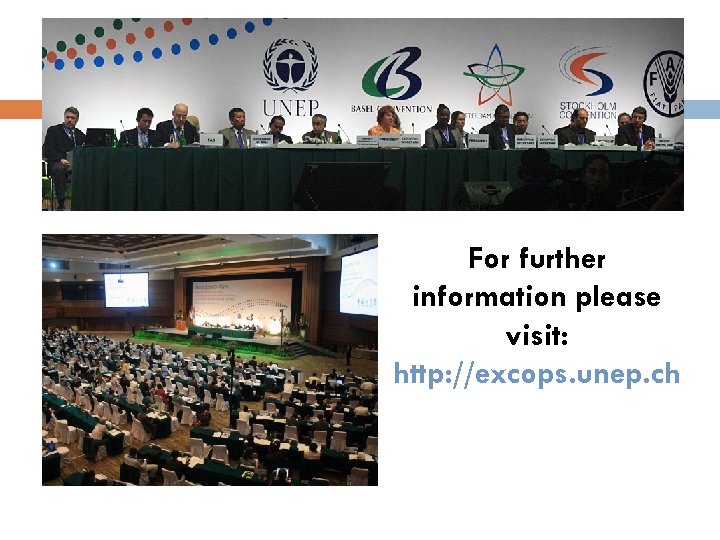 Скачать презентацию ENHANCING SYNERGIES AMONG THE BASEL ROTTERDAM AND STOCKHOLM

The beginning of current process The Ad Hoc Joint Working Group on enhancing cooperation and coordination among the Basel, Rotterdam and Stockholm Conventions (AHJWG) was established in 2006 by decisions taken by the COPs of each Convention AHJWG: was composed of 15 representatives of Parties to each of the three conventions had three co-chairs (from Chile, China and Finland) met three times (Helsinki, March 2007; Vienna, December 2007; Rome, March 2008)

AHJWG outcomes The AHJWG agreed on a set of recommendations to promote synergies at the national, regional and global levels. Based on the recommendations, the AHJWG prepared almost identical draft decisions for the COPs of each of the Basel, Rotterdam and Stockholm Conventions to consider.

COPs agree to Synergies decisions The Conferences of the Parties to the Basel Convention (2008), Rotterdam Convention (2008) and Stockholm Convention (2009) adopted the draft decisions prepared by the AHJWG without any substantive amendments. These decisions, among other things, set in motion the establishment of joint services among the Conventions and the process for the first simultaneous meetings of the extraordinary COPs of the 3 Conventions, held in coordination with the UNEP GC/SS and GMEF in February 2010.

Agenda Ex. COPs - 2010 Joint activities Joint managerial functions Joint services Synchronization of the budget cycles Joint audits of the accounts of the secretariats Decisions on review mechanisms and follow up Reports on information received by ED of UNEP and the Secretariats on activities or proposals for joint institutions

Decisions – Joint managerial functions Joint head function established for the Secretariats of the Basel, Stockholm Conventions and UNEP part of the Rotterdam Convention

Decisions – Joint audits UN Office for Internal Oversight Services to audit in 2010 the strategic management of UNEP MEAs; UNEP ED to present a report on the audit of each Convention for consideration by COPs in 2011.

Decisions – Review arrangements First review at COPs in 2013 on how far arrangements adopted pursuant to synergies decisions have contributed to achieving the following objectives: Strengthen implementation of conventions at national, regional and global levels; Promote coherent policy guidance; Reduce administrative burden; Maximize effective use of resources; Take into account global concerns and specific needs of developing and transition countries; Protect human health and the environment for the promotion of sustainable development.