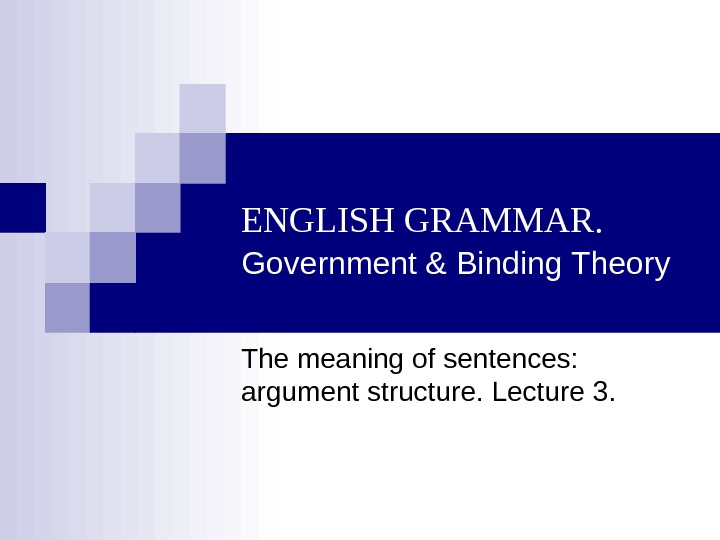 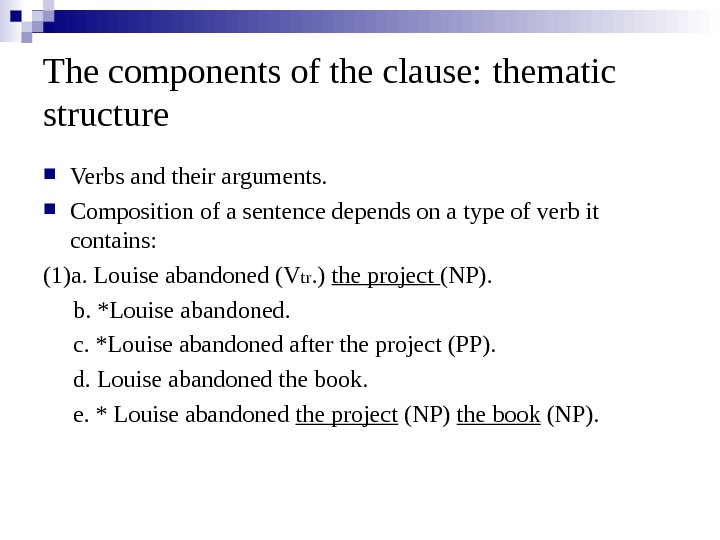 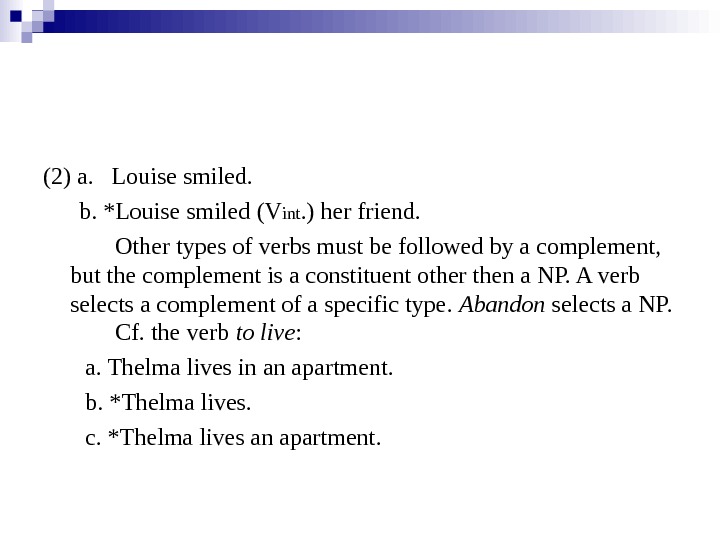 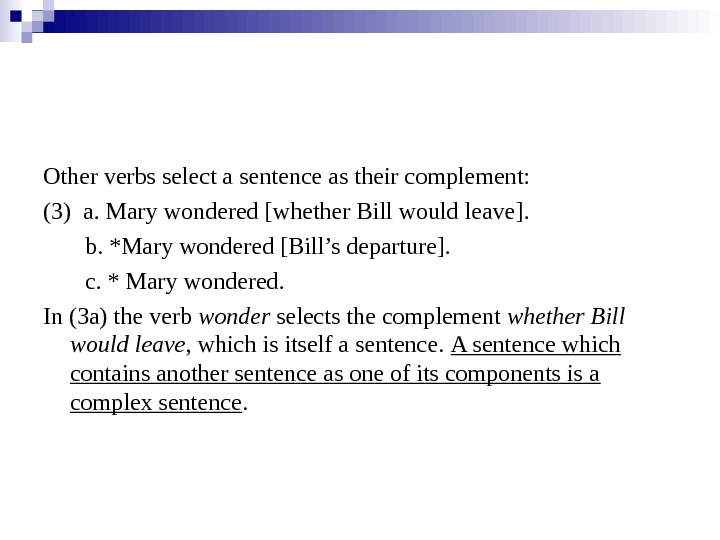 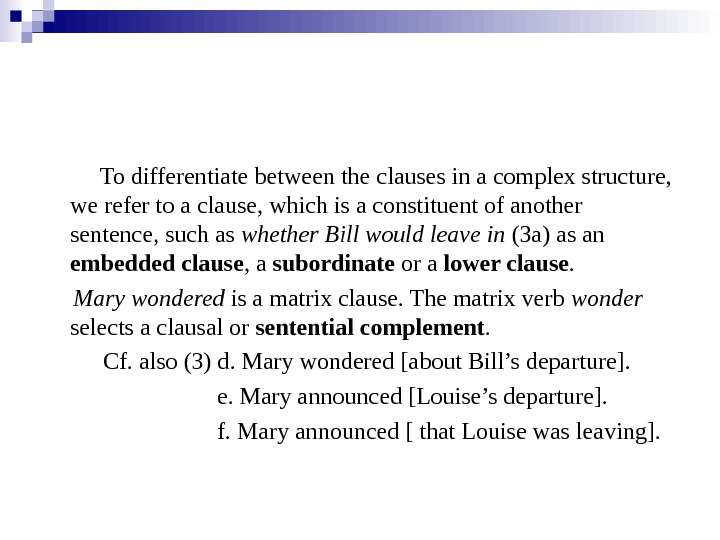 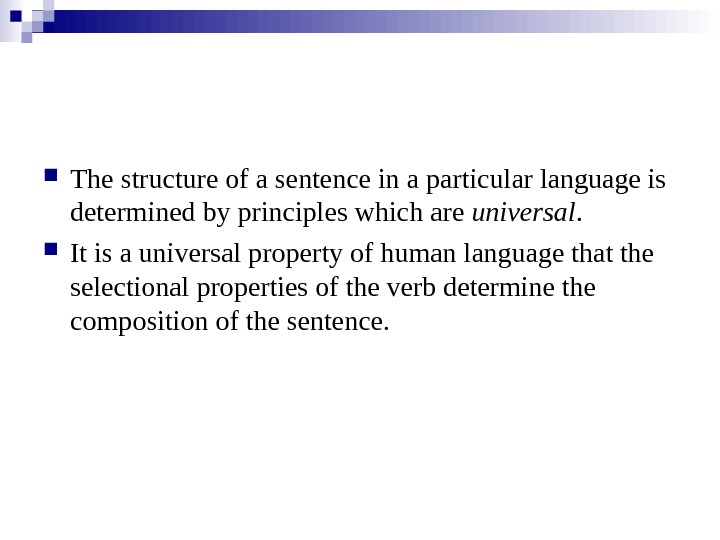 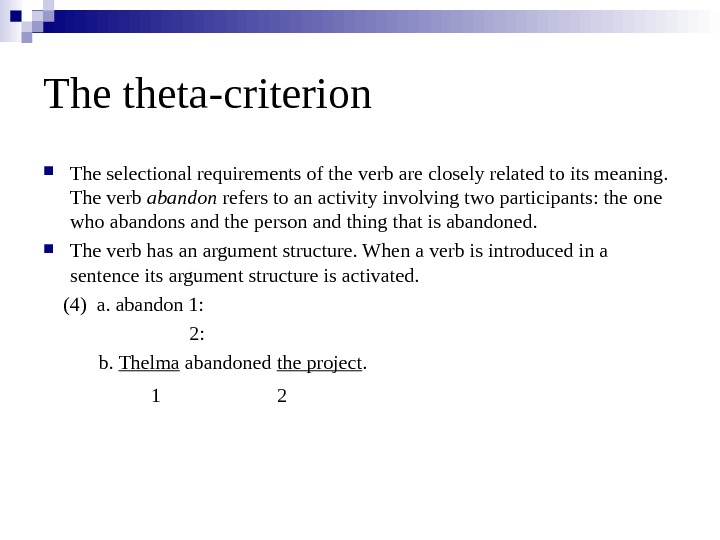 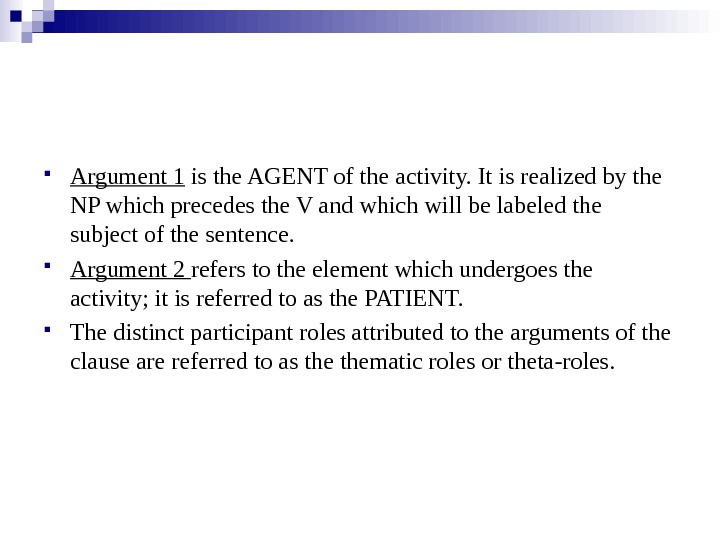 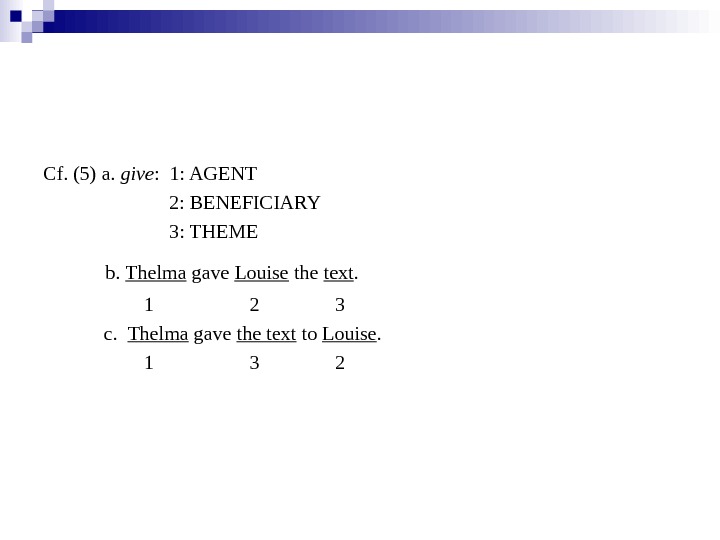 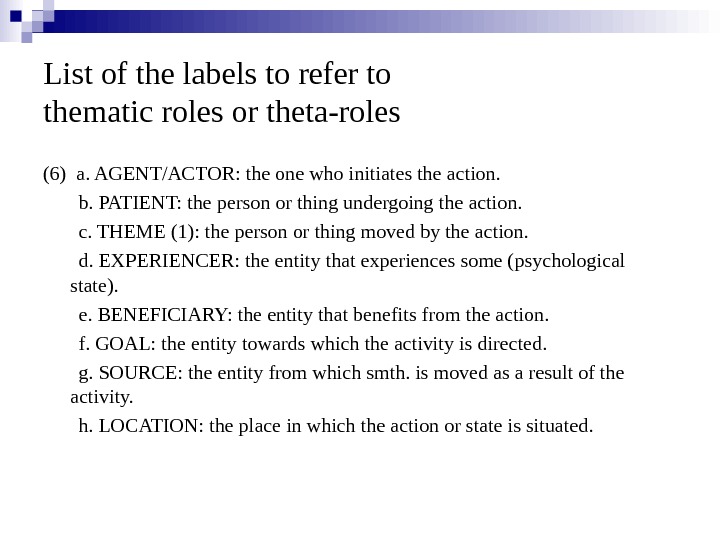 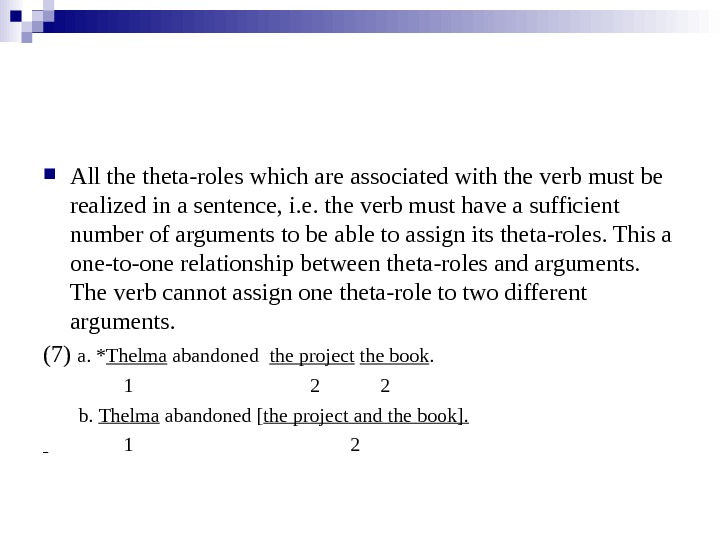 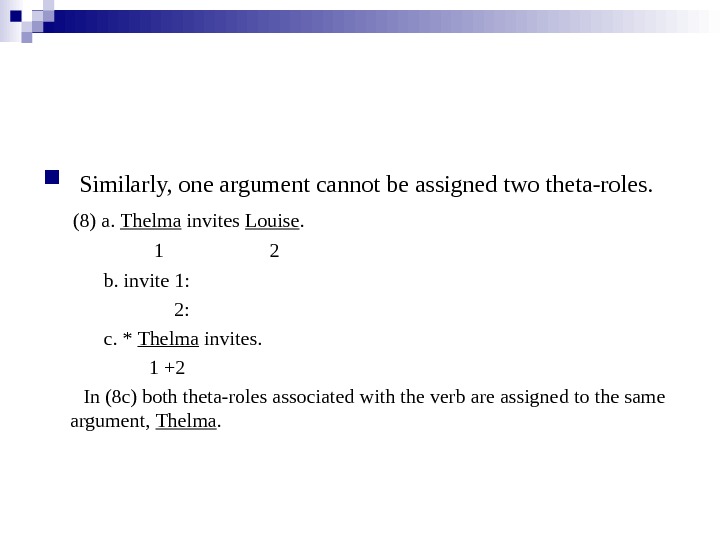 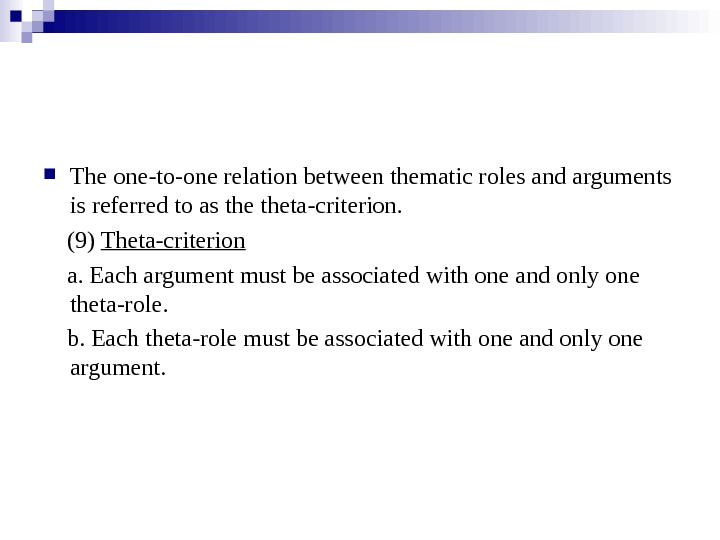 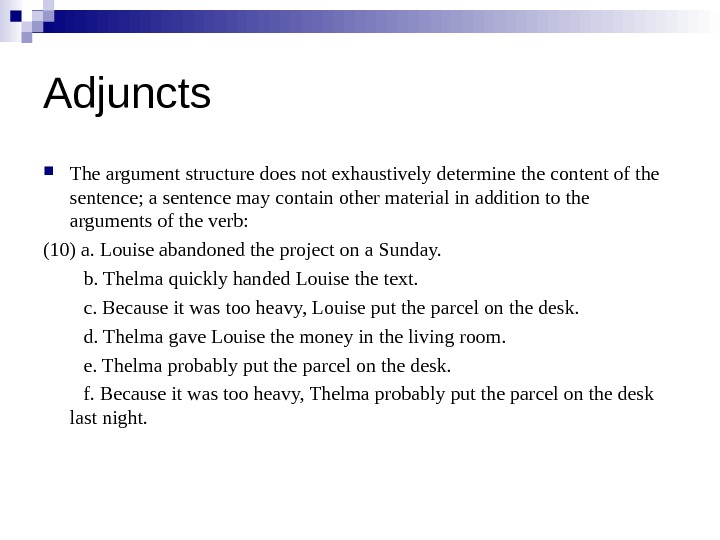 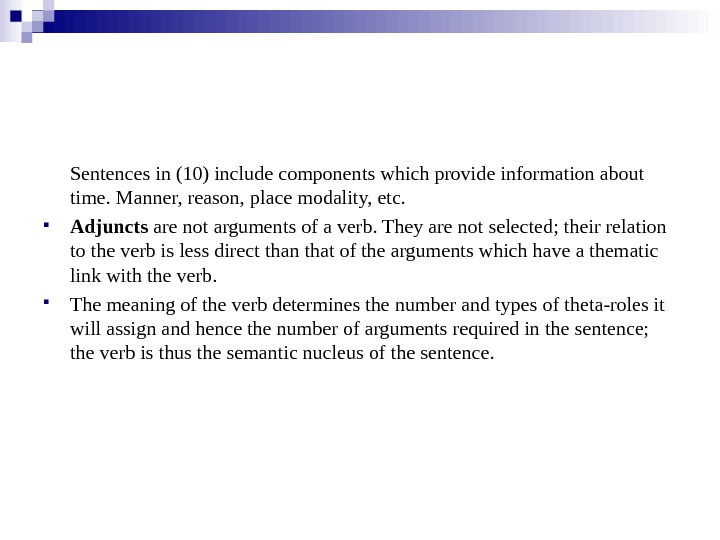 To differentiate between the clauses in a complex structure, we refer to a clause, which is a constituent of another sentence, such as whether Bill would leave in (3 a) as an embedded clause , a subordinate or a lower clause. Mary wondered is a matrix clause. The matrix verb wonder selects a clausal or sentential complement. Cf. also (3) d. Mary wondered [about Bill’s departure]. e. Mary announced [Louise’s departure]. f. Mary announced [ that Louise was leaving].

The structure of a sentence in a particular language is determined by principles which are universal. It is a universal property of human language that the selectional properties of the verb determine the composition of the sentence.

The theta-criterion The selectional requirements of the verb are closely related to its meaning. The verb abandon refers to an activity involving two participants: the one who abandons and the person and thing that is abandoned. The verb has an argument structure. When a verb is introduced in a sentence its argument structure is activated. (4) a. abandon 1: 2: b. Thelma abandoned the project.

Argument 1 is the AGENT of the activity. It is realized by the NP which precedes the V and which will be labeled the subject of the sentence. Argument 2 refers to the element which undergoes the activity; it is referred to as the PATIENT. The distinct participant roles attributed to the arguments of the clause are referred to as thematic roles or theta-roles.

Sentences in (10) include components which provide information about time. Manner, reason, place modality, etc. Adjuncts are not arguments of a verb. They are not selected; their relation to the verb is less direct than that of the arguments which have a thematic link with the verb. The meaning of the verb determines the number and types of theta-roles it will assign and hence the number of arguments required in the sentence; the verb is thus the semantic nucleus of the sentence.