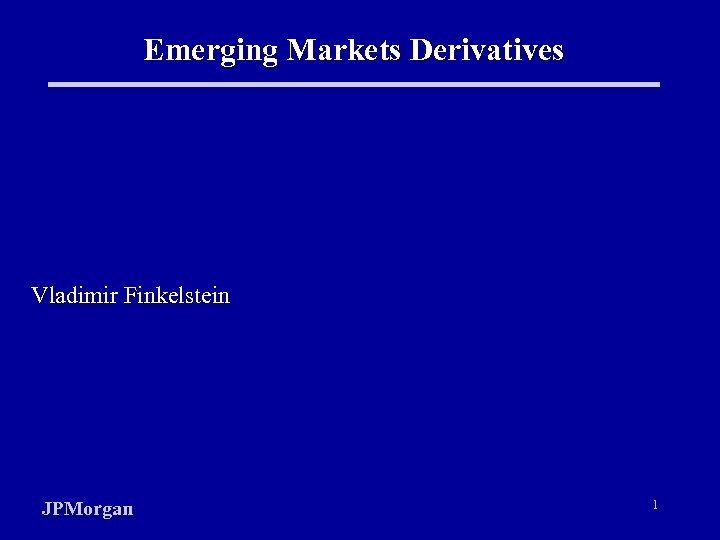 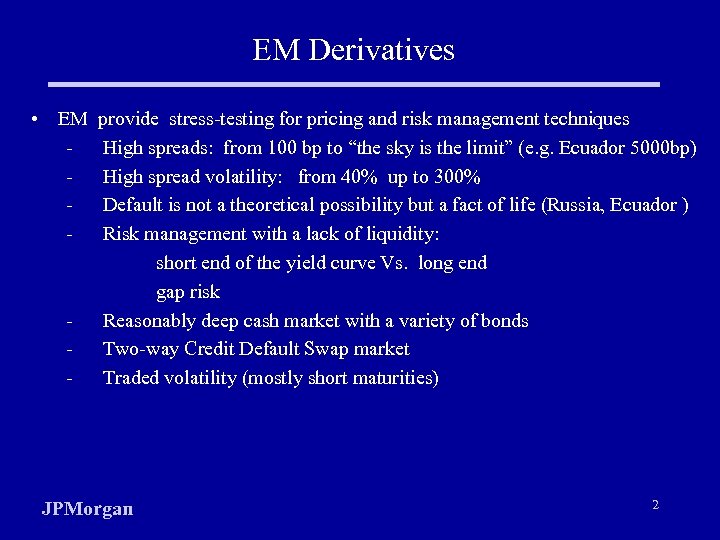 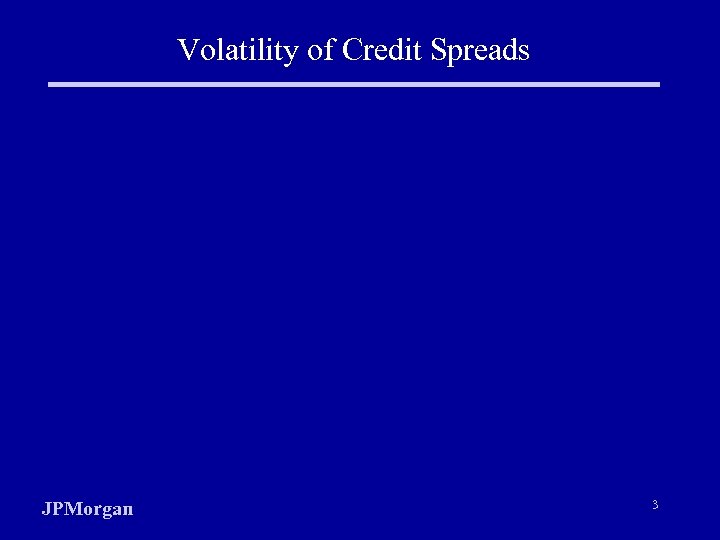 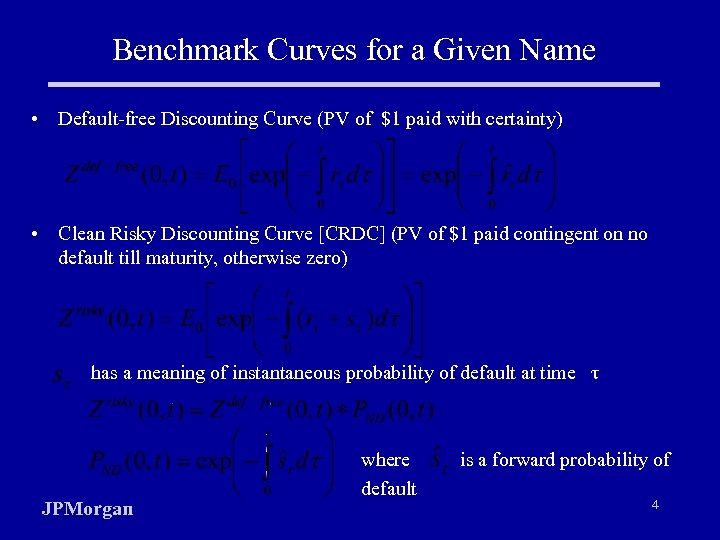 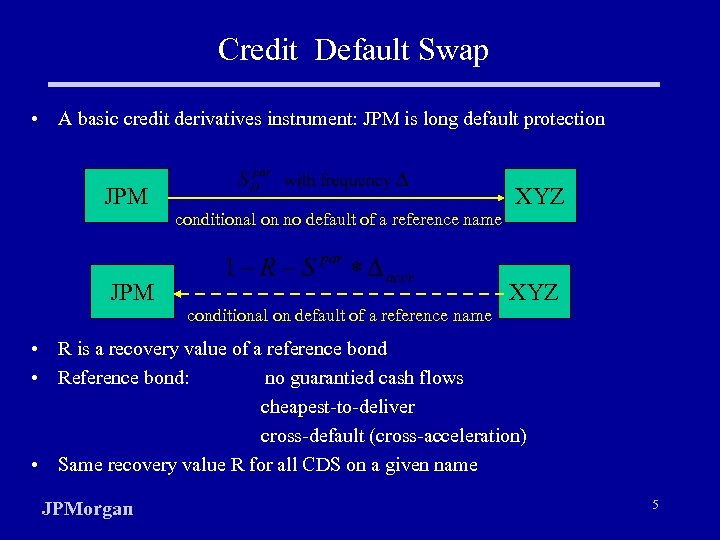 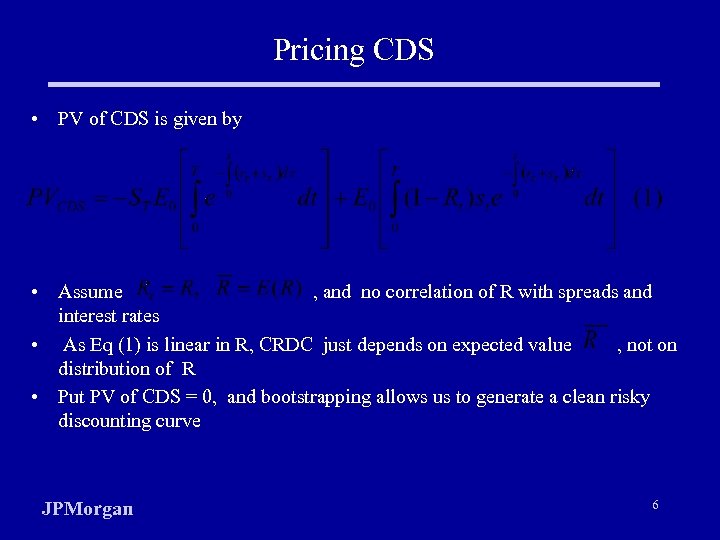 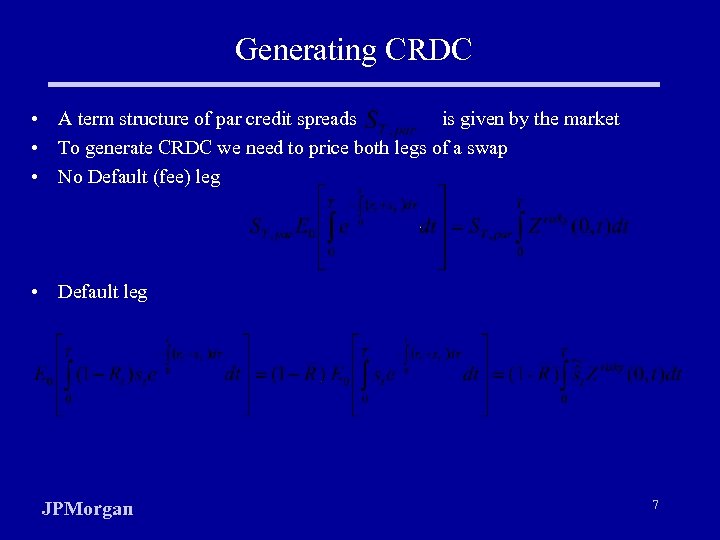 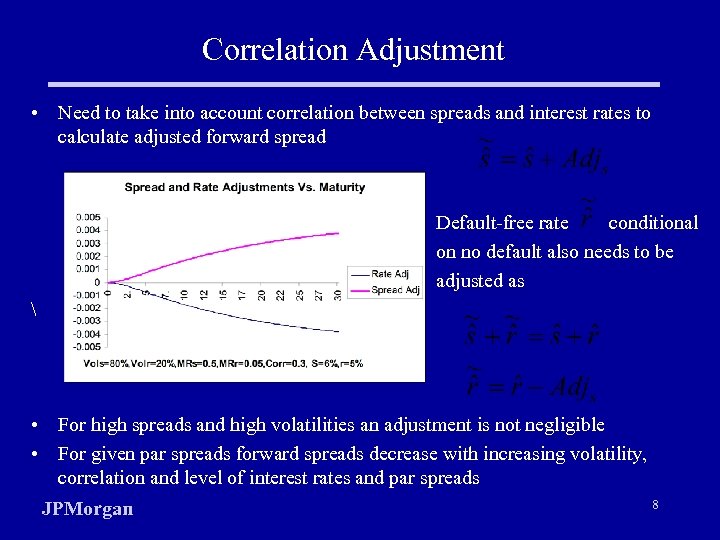 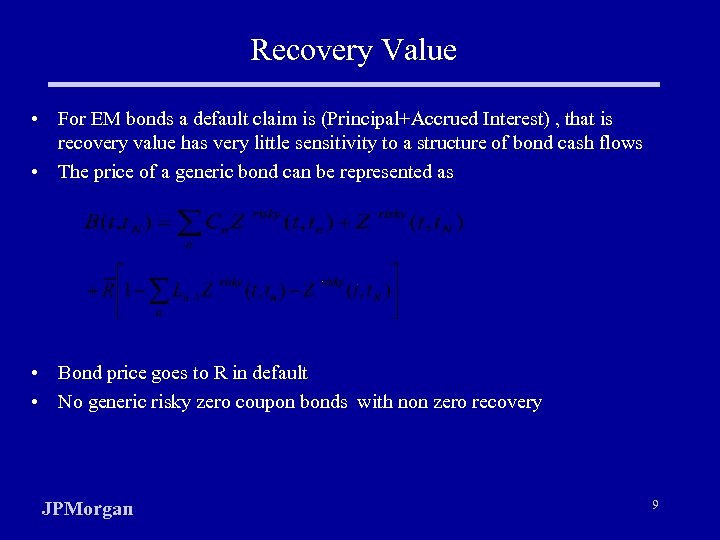 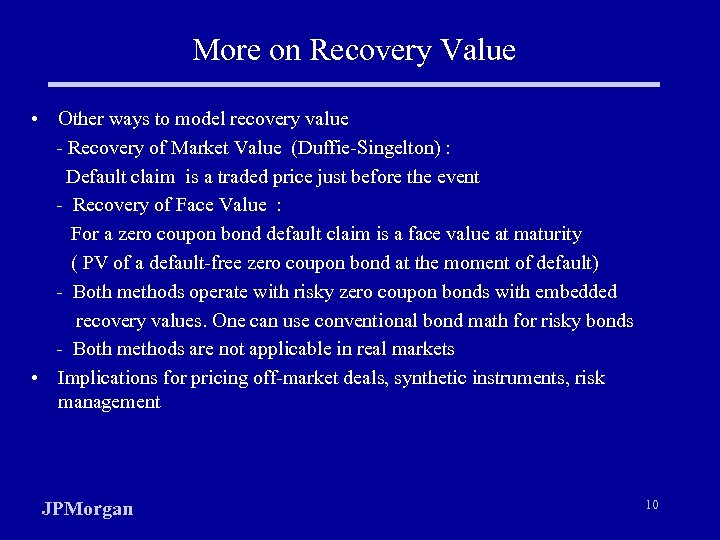 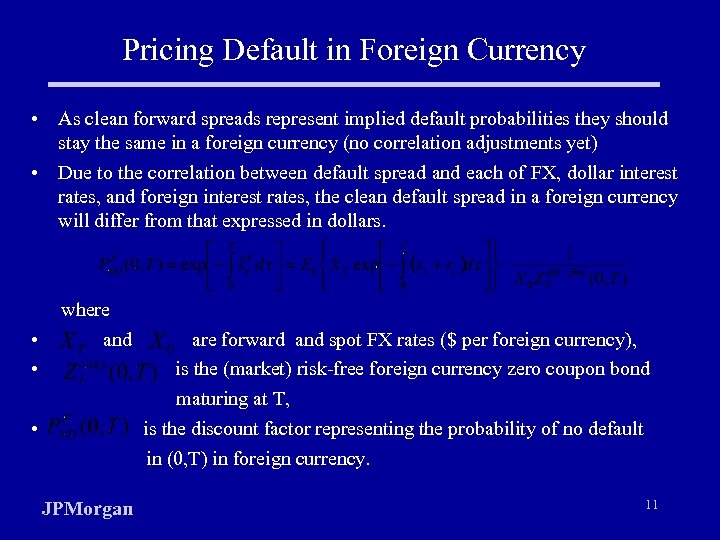 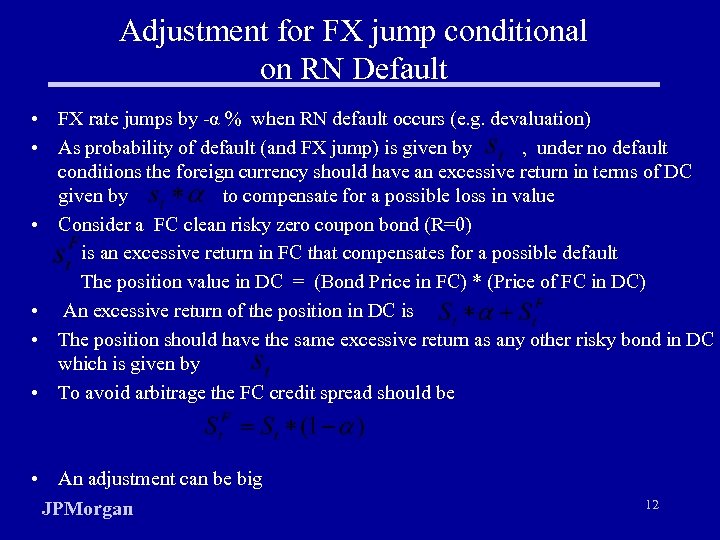 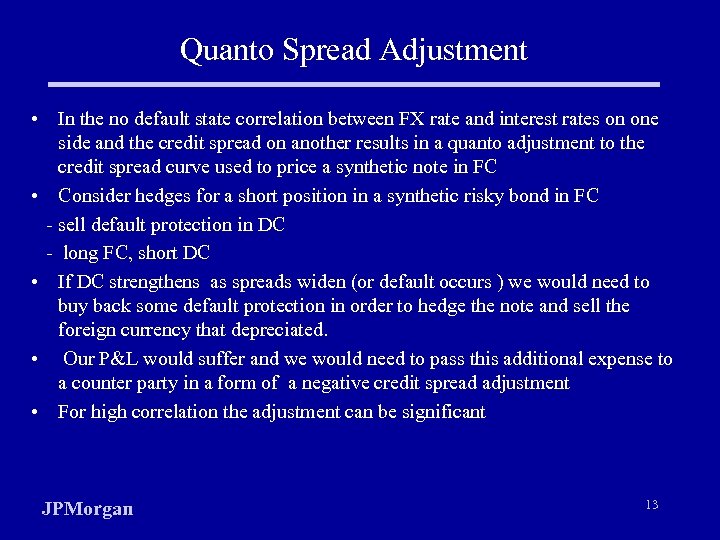 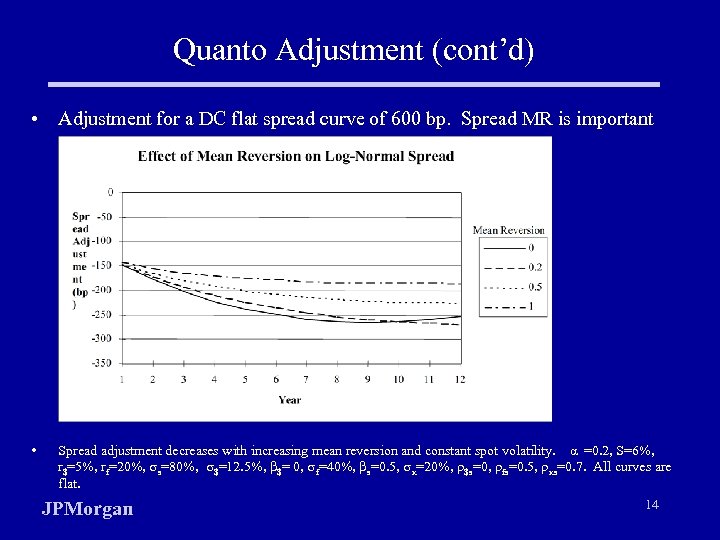 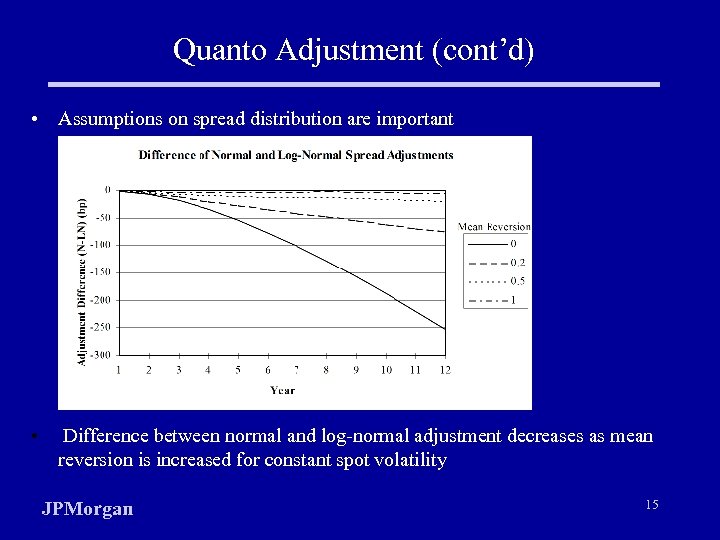 EM Derivatives • EM - - provide stress-testing for pricing and risk management techniques High spreads: from 100 bp to “the sky is the limit” (e. g. Ecuador 5000 bp) High spread volatility: from 40% up to 300% Default is not a theoretical possibility but a fact of life (Russia, Ecuador ) Risk management with a lack of liquidity: short end of the yield curve Vs. long end gap risk Reasonably deep cash market with a variety of bonds Two-way Credit Default Swap market Traded volatility (mostly short maturities) JPMorgan 2

Pricing CDS • PV of CDS is given by • Assume , and no correlation of R with spreads and interest rates • As Eq (1) is linear in R, CRDC just depends on expected value , not on distribution of R • Put PV of CDS = 0, and bootstrapping allows us to generate a clean risky discounting curve JPMorgan 6

Correlation Adjustment • Need to take into account correlation between spreads and interest rates to calculate adjusted forward spread Default-free rate conditional on no default also needs to be adjusted as • For high spreads and high volatilities an adjustment is not negligible • For given par spreads forward spreads decrease with increasing volatility, correlation and level of interest rates and par spreads JPMorgan 8

Recovery Value • For EM bonds a default claim is (Principal+Accrued Interest) , that is recovery value has very little sensitivity to a structure of bond cash flows • The price of a generic bond can be represented as • Bond price goes to R in default • No generic risky zero coupon bonds with non zero recovery JPMorgan 9

More on Recovery Value • Other ways to model recovery value - Recovery of Market Value (Duffie-Singelton) : Default claim is a traded price just before the event - Recovery of Face Value : For a zero coupon bond default claim is a face value at maturity ( PV of a default-free zero coupon bond at the moment of default) - Both methods operate with risky zero coupon bonds with embedded recovery values. One can use conventional bond math for risky bonds - Both methods are not applicable in real markets • Implications for pricing off-market deals, synthetic instruments, risk management JPMorgan 10

Adjustment for FX jump conditional on RN Default • FX rate jumps by -α % when RN default occurs (e. g. devaluation) • As probability of default (and FX jump) is given by , under no default conditions the foreign currency should have an excessive return in terms of DC given by to compensate for a possible loss in value • Consider a FC clean risky zero coupon bond (R=0) is an excessive return in FC that compensates for a possible default The position value in DC = (Bond Price in FC) * (Price of FC in DC) • An excessive return of the position in DC is • The position should have the same excessive return as any other risky bond in DC which is given by • To avoid arbitrage the FC credit spread should be • An adjustment can be big JPMorgan 12

Quanto Spread Adjustment • In the no default state correlation between FX rate and interest rates on one side and the credit spread on another results in a quanto adjustment to the credit spread curve used to price a synthetic note in FC • Consider hedges for a short position in a synthetic risky bond in FC - sell default protection in DC - long FC, short DC • If DC strengthens as spreads widen (or default occurs ) we would need to buy back some default protection in order to hedge the note and sell the foreign currency that depreciated. • Our P&L would suffer and we would need to pass this additional expense to a counter party in a form of a negative credit spread adjustment • For high correlation the adjustment can be significant JPMorgan 13

Financial Markets and Institutions 1. Role of