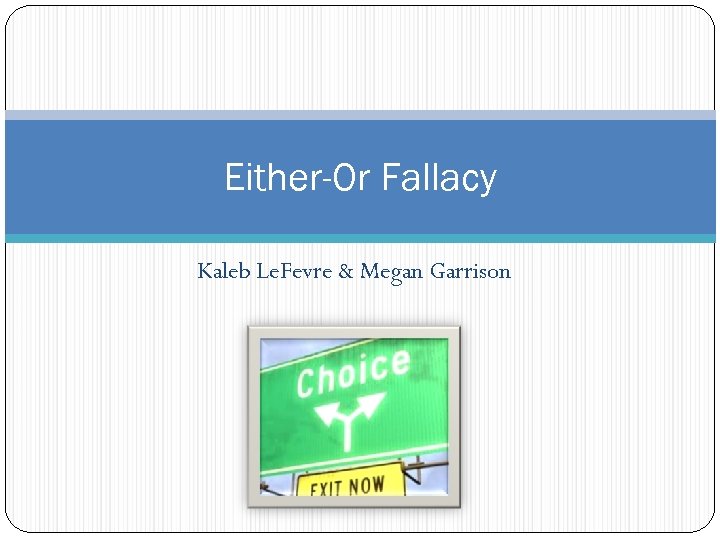 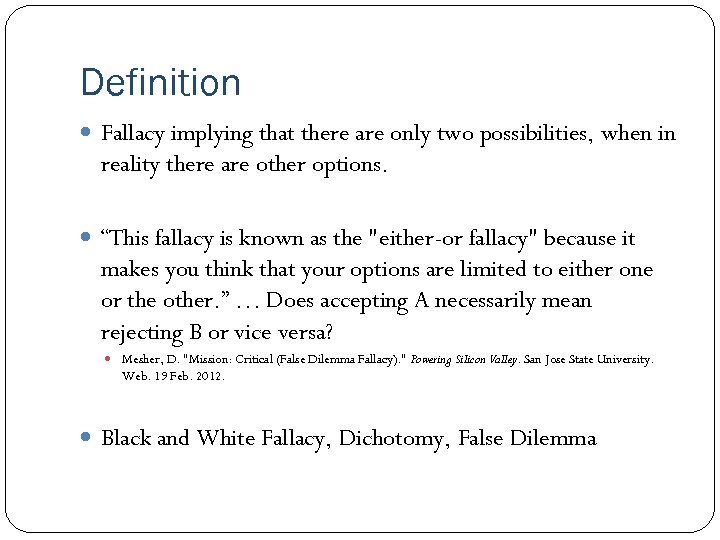 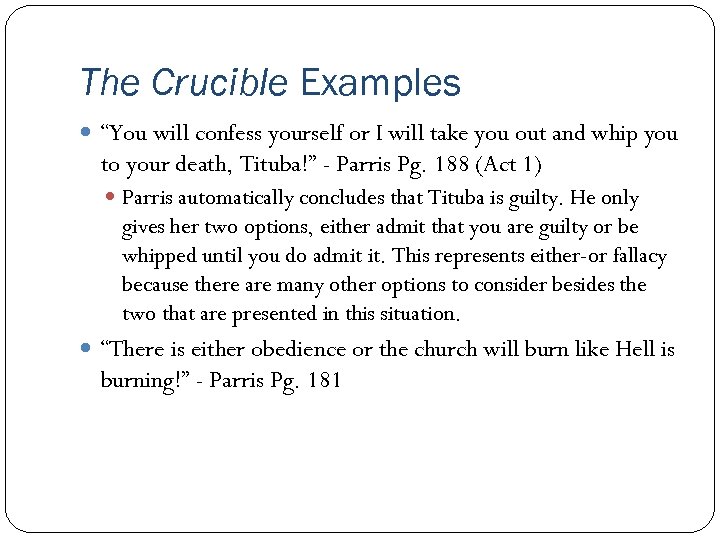 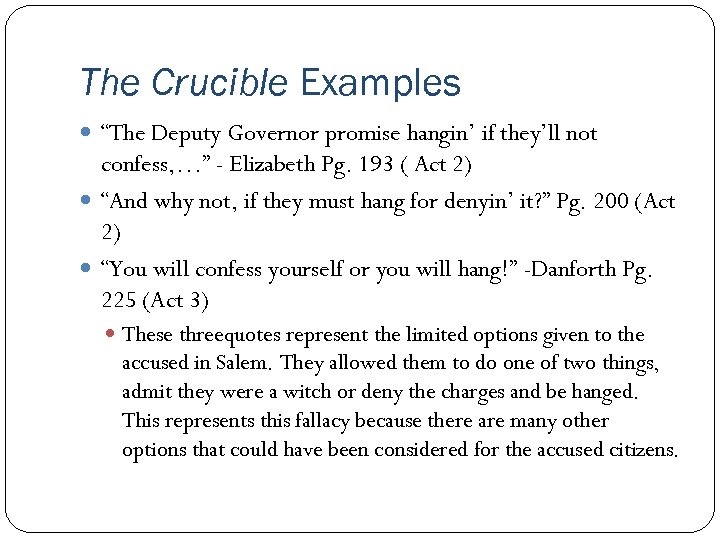 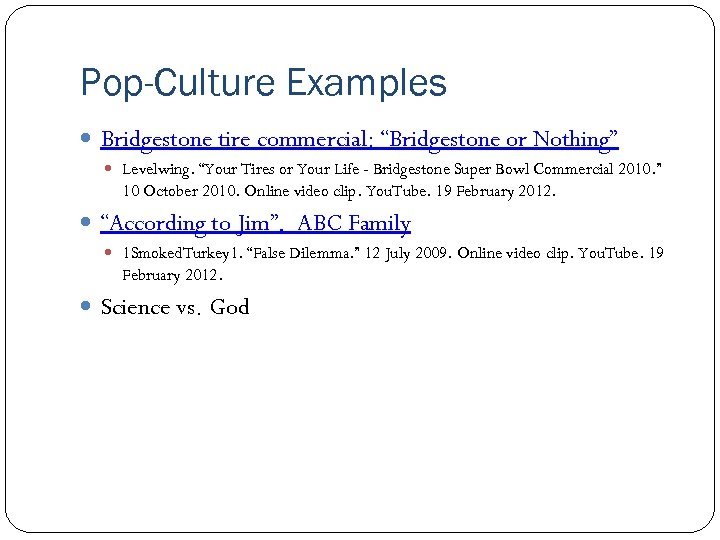 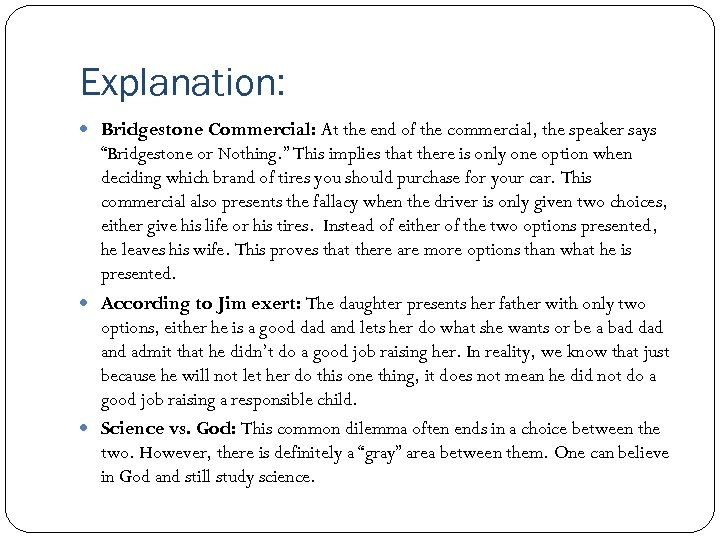 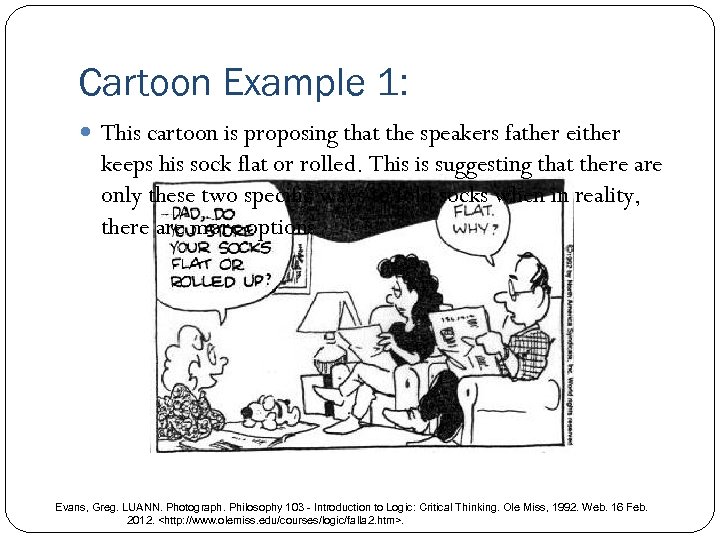 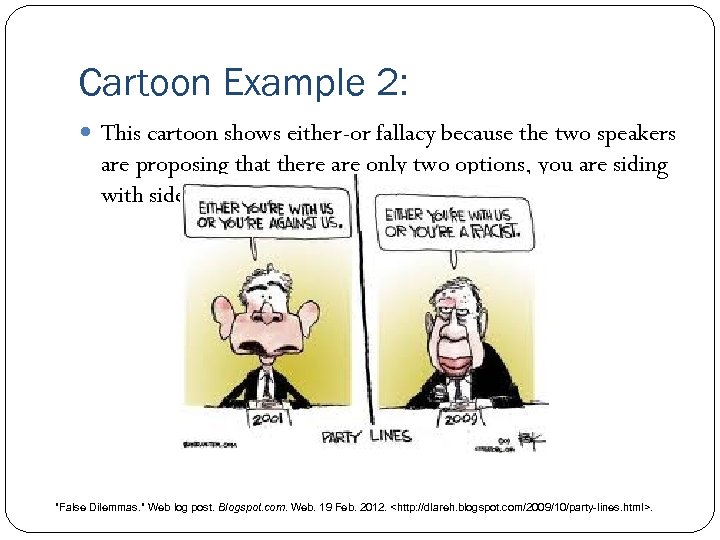 Definition Fallacy implying that there are only two possibilities, when in reality there are other options. “This fallacy is known as the "either-or fallacy" because it makes you think that your options are limited to either one or the other. ” … Does accepting A necessarily mean rejecting B or vice versa? Mesher, D. "Mission: Critical (False Dilemma Fallacy). " Powering Silicon Valley. San Jose State University. Web. 19 Feb. 2012. Black and White Fallacy, Dichotomy, False Dilemma

The Crucible Examples “You will confess yourself or I will take you out and whip you to your death, Tituba!” - Parris Pg. 188 (Act 1) Parris automatically concludes that Tituba is guilty. He only gives her two options, either admit that you are guilty or be whipped until you do admit it. This represents either-or fallacy because there are many other options to consider besides the two that are presented in this situation. “There is either obedience or the church will burn like Hell is burning!” - Parris Pg. 181

The Crucible Examples “The Deputy Governor promise hangin’ if they’ll not confess, …” - Elizabeth Pg. 193 ( Act 2) “And why not, if they must hang for denyin’ it? ” Pg. 200 (Act 2) “You will confess yourself or you will hang!” -Danforth Pg. 225 (Act 3) These threequotes represent the limited options given to the accused in Salem. They allowed them to do one of two things, admit they were a witch or deny the charges and be hanged. This represents this fallacy because there are many other options that could have been considered for the accused citizens.

The Crucible Examples “…a person is either with this court or against it, there be no road in between. ” -Danforth Pg. 213 (Act 3) The citizens in Salem were never given the option of rebelling against the court and its wrong doings. Therefore, they were all required to be “with the court”.

Explanation: Bridgestone Commercial: At the end of the commercial, the speaker says “Bridgestone or Nothing. ” This implies that there is only one option when deciding which brand of tires you should purchase for your car. This commercial also presents the fallacy when the driver is only given two choices, either give his life or his tires. Instead of either of the two options presented, he leaves his wife. This proves that there are more options than what he is presented. According to Jim exert: The daughter presents her father with only two options, either he is a good dad and lets her do what she wants or be a bad dad and admit that he didn’t do a good job raising her. In reality, we know that just because he will not let her do this one thing, it does not mean he did not do a good job raising a responsible child. Science vs. God: This common dilemma often ends in a choice between the two. However, there is definitely a “gray” area between them. One can believe in God and still study science.

Cartoon Example 1: This cartoon is proposing that the speakers father either keeps his sock flat or rolled. This is suggesting that there are only these two specific ways to fold socks when in reality, there are more options. Evans, Greg. LUANN. Photograph. Philosophy 103 - Introduction to Logic: Critical Thinking. Ole Miss, 1992. Web. 16 Feb. 2012.

Cartoon Example 2: This cartoon shows either-or fallacy because the two speakers are proposing that there are only two options, you are siding with side or side b. "False Dilemmas. " Web log post. Blogspot. com. Web. 19 Feb. 2012.