Egypt officially the Arab Republic of Egypt is 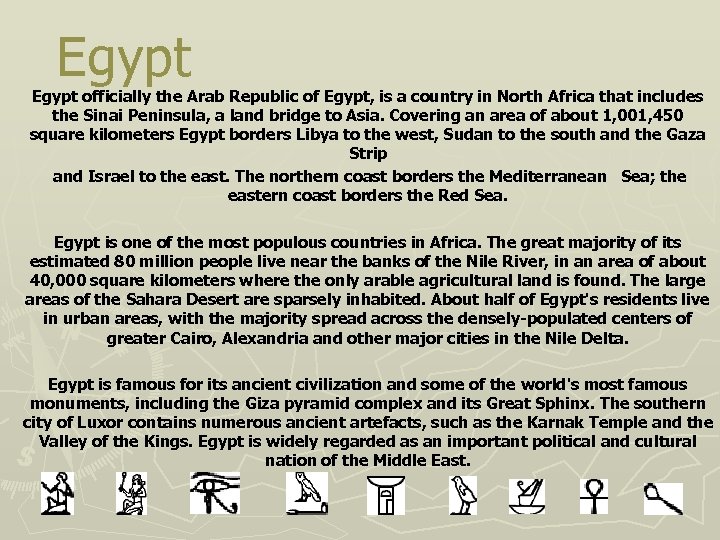 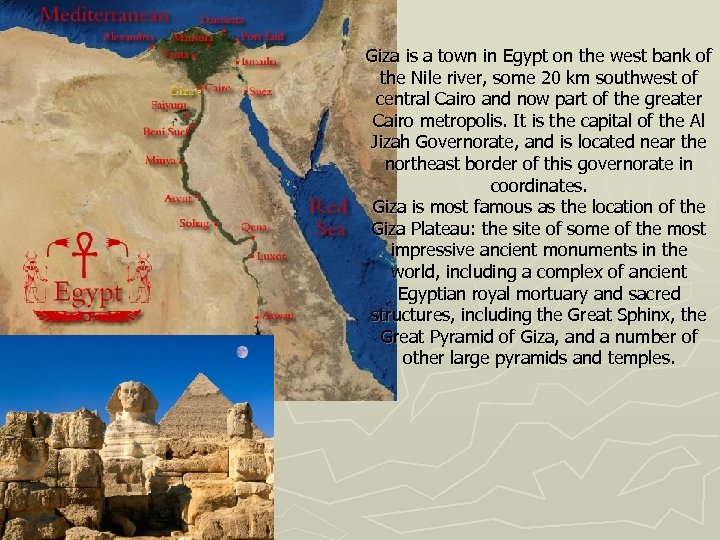 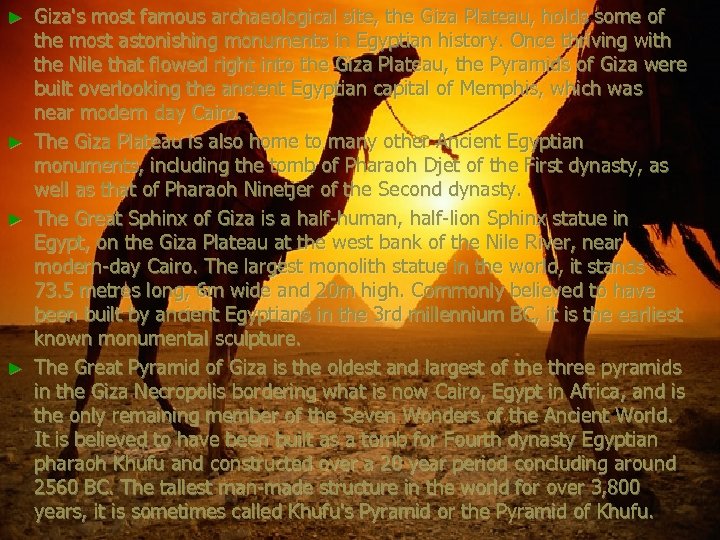 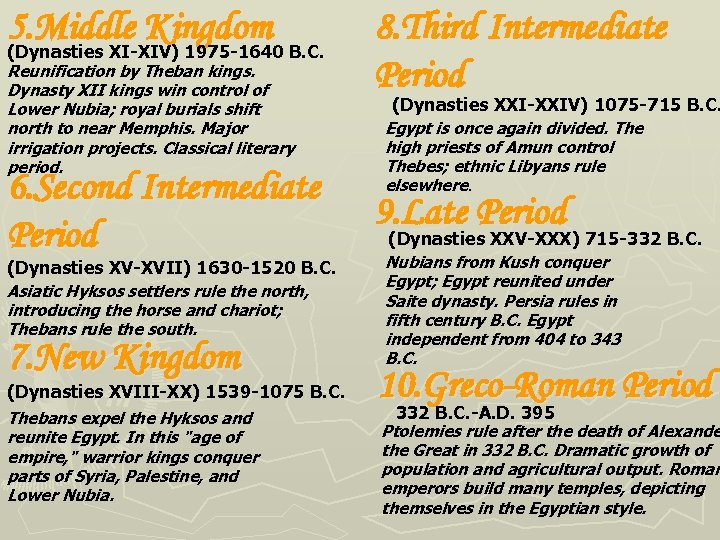 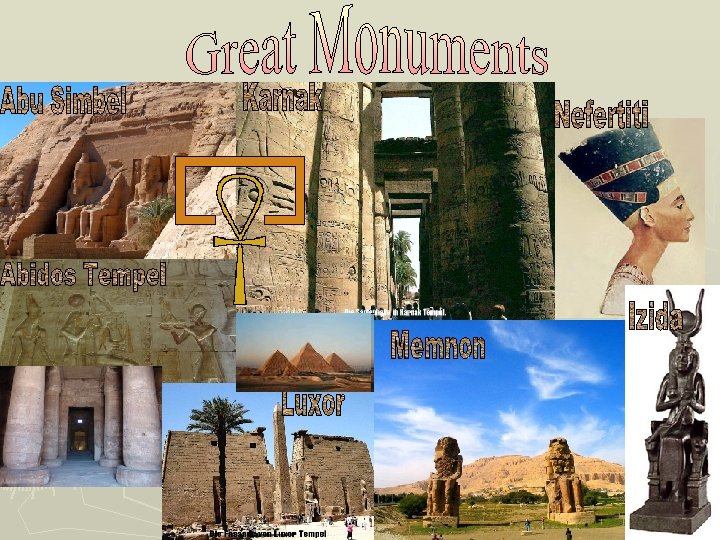 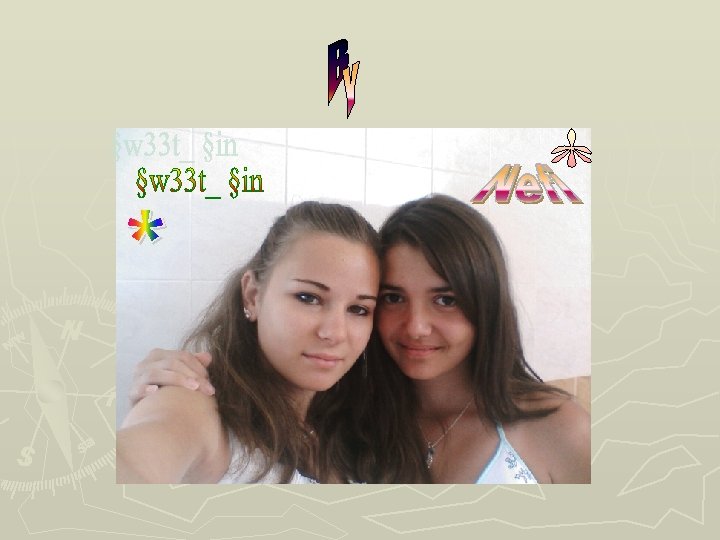 Скачать презентацию Egypt officially the Arab Republic of Egypt is

Egypt officially the Arab Republic of Egypt, is a country in North Africa that includes the Sinai Peninsula, a land bridge to Asia. Covering an area of about 1, 001, 450 square kilometers Egypt borders Libya to the west, Sudan to the south and the Gaza Strip and Israel to the east. The northern coast borders the Mediterranean Sea; the eastern coast borders the Red Sea. Egypt is one of the most populous countries in Africa. The great majority of its estimated 80 million people live near the banks of the Nile River, in an area of about 40, 000 square kilometers where the only arable agricultural land is found. The large areas of the Sahara Desert are sparsely inhabited. About half of Egypt's residents live in urban areas, with the majority spread across the densely-populated centers of greater Cairo, Alexandria and other major cities in the Nile Delta. Egypt is famous for its ancient civilization and some of the world's most famous monuments, including the Giza pyramid complex and its Great Sphinx. The southern city of Luxor contains numerous ancient artefacts, such as the Karnak Temple and the Valley of the Kings. Egypt is widely regarded as an important political and cultural nation of the Middle East.

Giza is a town in Egypt on the west bank of the Nile river, some 20 km southwest of central Cairo and now part of the greater Cairo metropolis. It is the capital of the Al Jizah Governorate, and is located near the northeast border of this governorate in coordinates. Giza is most famous as the location of the Giza Plateau: the site of some of the most impressive ancient monuments in the world, including a complex of ancient Egyptian royal mortuary and sacred structures, including the Great Sphinx, the Great Pyramid of Giza, and a number of other large pyramids and temples.

Giza's most famous archaeological site, the Giza Plateau, holds some of the most astonishing monuments in Egyptian history. Once thriving with the Nile that flowed right into the Giza Plateau, the Pyramids of Giza were built overlooking the ancient Egyptian capital of Memphis, which was near modern day Cairo. ► The Giza Plateau is also home to many other Ancient Egyptian monuments, including the tomb of Pharaoh Djet of the First dynasty, as well as that of Pharaoh Ninetjer of the Second dynasty. ► The Great Sphinx of Giza is a half-human, half-lion Sphinx statue in Egypt, on the Giza Plateau at the west bank of the Nile River, near modern-day Cairo. The largest monolith statue in the world, it stands 73. 5 metres long, 6 m wide and 20 m high. Commonly believed to have been built by ancient Egyptians in the 3 rd millennium BC, it is the earliest known monumental sculpture. ► The Great Pyramid of Giza is the oldest and largest of the three pyramids in the Giza Necropolis bordering what is now Cairo, Egypt in Africa, and is the only remaining member of the Seven Wonders of the Ancient World. It is believed to have been built as a tomb for Fourth dynasty Egyptian pharaoh Khufu and constructed over a 20 year period concluding around 2560 BC. The tallest man-made structure in the world for over 3, 800 years, it is sometimes called Khufu's Pyramid or the Pyramid of Khufu. ►

Time Line of Ancient Egypt 1. Predynastic 2. Early Dynastic About 5500 -3000 B. C Climatic change about 7, 000 years ago turns most of Egypt— except for along the Nile—to desert. Farming begins and communities form along the river, with important population centers at Buto, Naqada, and Hierakonpolis. Egypt remains divided into Upper and Lower (southern and northern) Egypt. 3. Old Kingdom (Dynasties IV-VIII) 2575 -2150 B. C. Age of pyramids reaches zenith at Giza; cult of the sun god Re centered at Heliopolis. Cultural flowering; trade with Mediterranean region and brief occupation of Lower Nubia. (Dynasties I-III) 2950 -2575 B. C Consolidation of Upper and Lower Egypt and founding of Memphis, the first capital. Calendar and hieroglyphic writing created. Royal necropolis located at Abydos; vast cemeteries at Saqqara and other sites. 4. First Intermediate Period (Dynasties IX-XI) 2125 -1975 B. C. Political chaos as Egypt splits into two regions with separate dynasties.