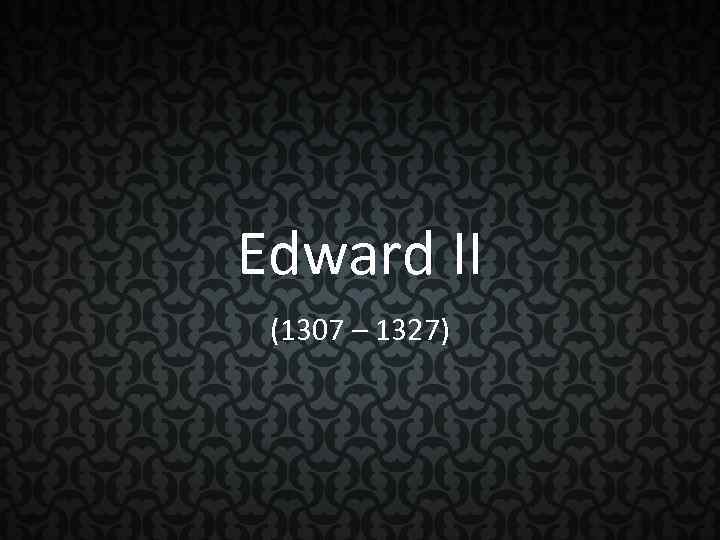 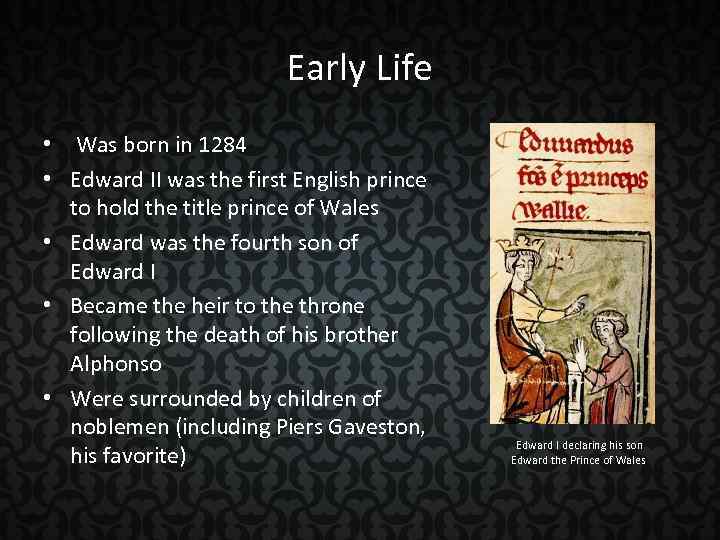 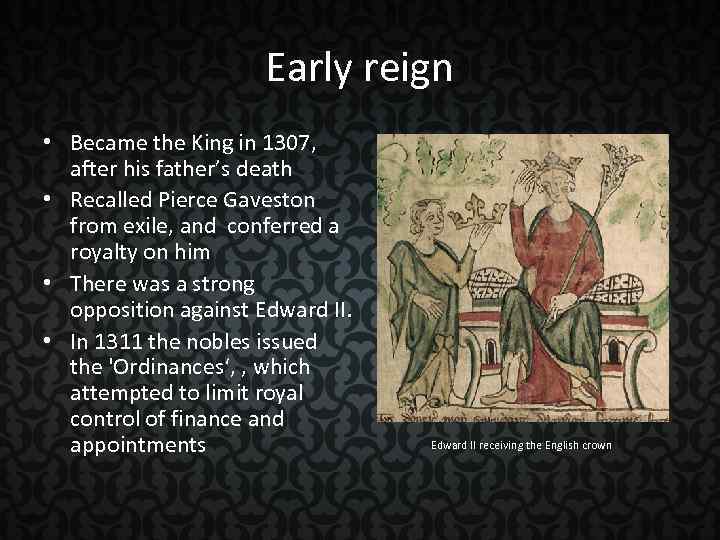 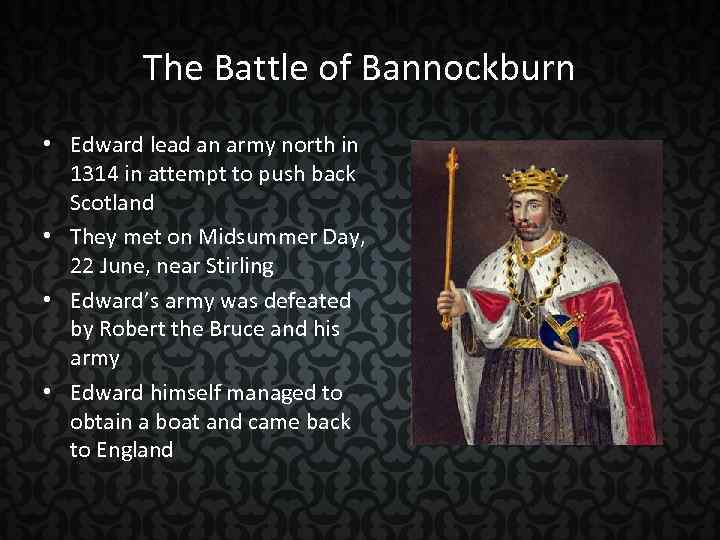 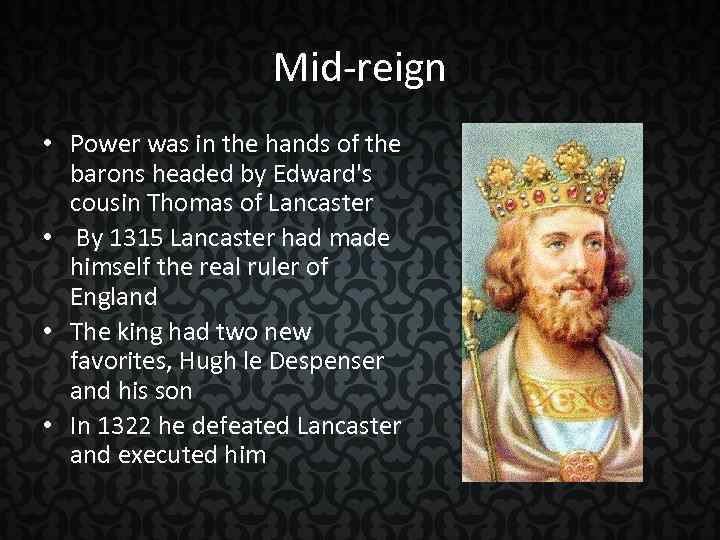 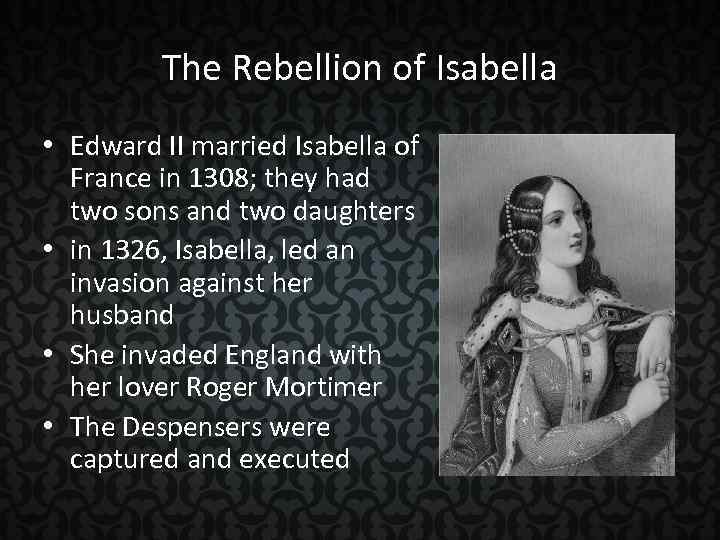 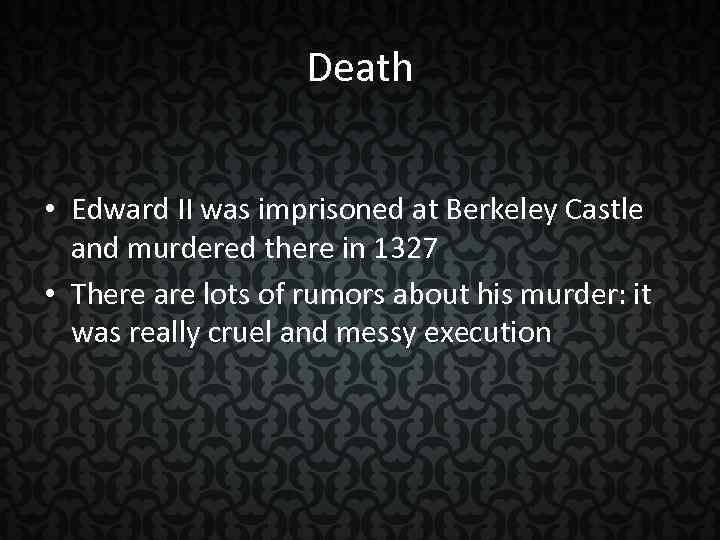 Edward II (made by Anastasia Aminova and Kseniya Davydova, 23804_2).pptx

Early Life • Was born in 1284 • Edward II was the first English prince to hold the title prince of Wales • Edward was the fourth son of Edward I • Became the heir to the throne following the death of his brother Alphonso • Were surrounded by children of noblemen (including Piers Gaveston, his favorite) Edward I declaring his son Edward the Prince of Wales

Early reign • Became the King in 1307, after his father’s death • Recalled Pierce Gaveston from exile, and conferred a royalty on him • There was a strong opposition against Edward II. • In 1311 the nobles issued the 'Ordinances‘, , which attempted to limit royal control of finance and appointments Edward II receiving the English crown

The Battle of Bannockburn • Edward lead an army north in 1314 in attempt to push back Scotland • They met on Midsummer Day, 22 June, near Stirling • Edward’s army was defeated by Robert the Bruce and his army • Edward himself managed to obtain a boat and came back to England

Mid-reign • Power was in the hands of the barons headed by Edward's cousin Thomas of Lancaster • By 1315 Lancaster had made himself the real ruler of England • The king had two new favorites, Hugh le Despenser and his son • In 1322 he defeated Lancaster and executed him

The Rebellion of Isabella • Edward II married Isabella of France in 1308; they had two sons and two daughters • in 1326, Isabella, led an invasion against her husband • She invaded England with her lover Roger Mortimer • The Despensers were captured and executed

Death • Edward II was imprisoned at Berkeley Castle and murdered there in 1327 • There are lots of rumors about his murder: it was really cruel and messy execution