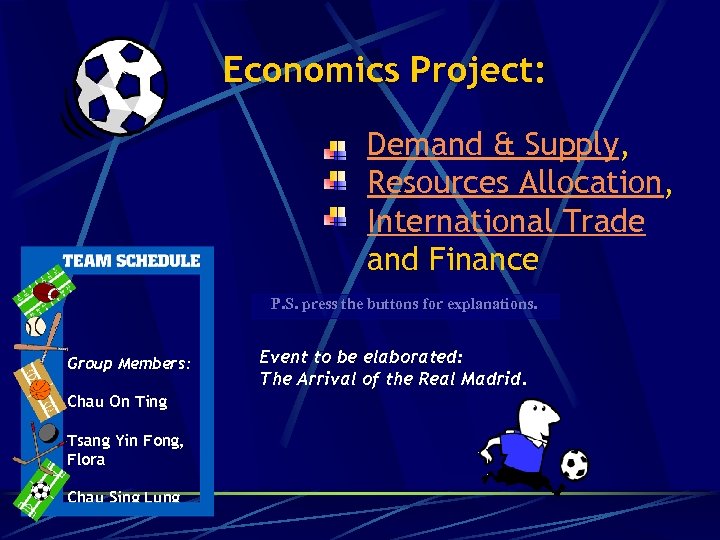 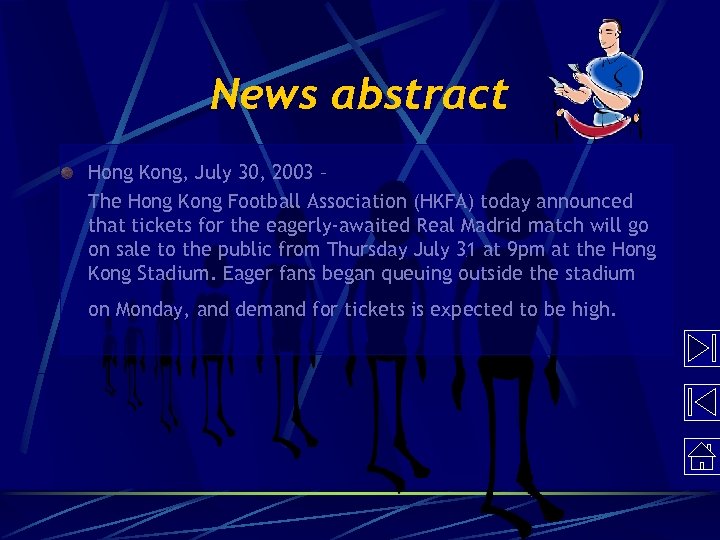 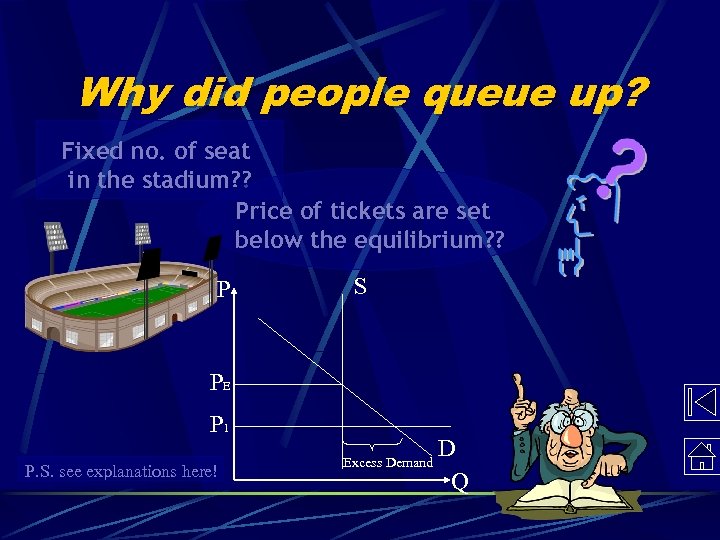 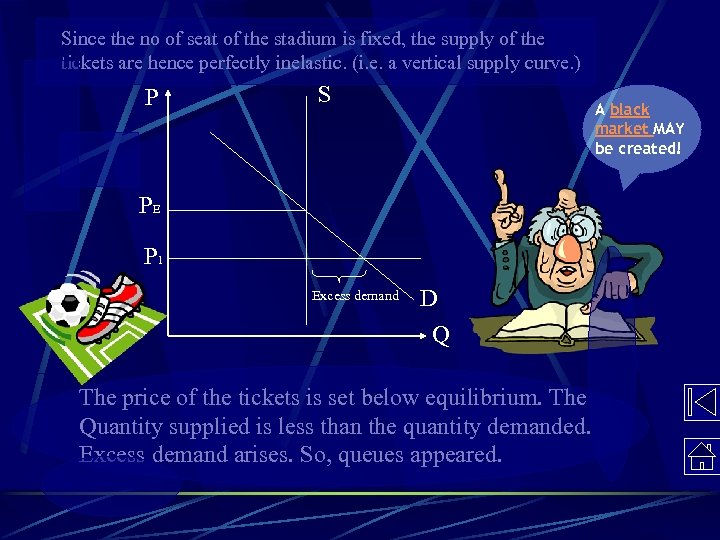 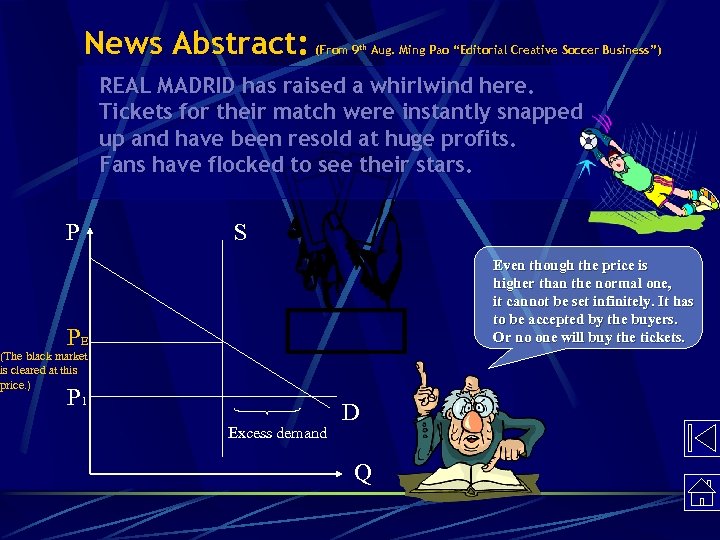 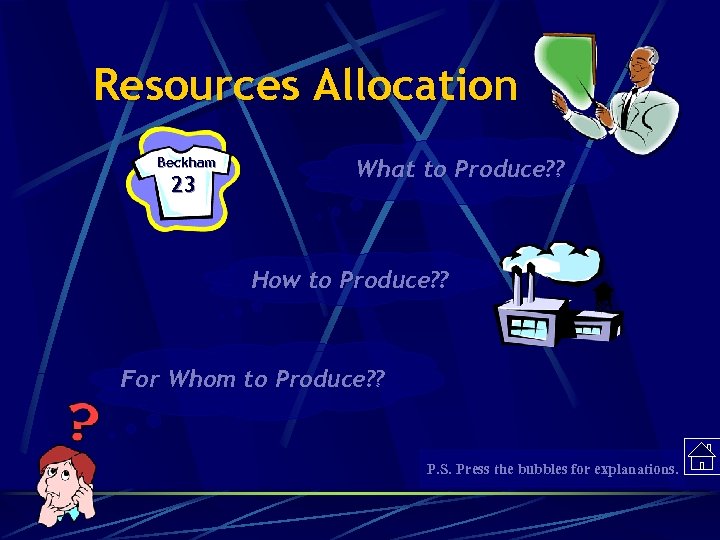 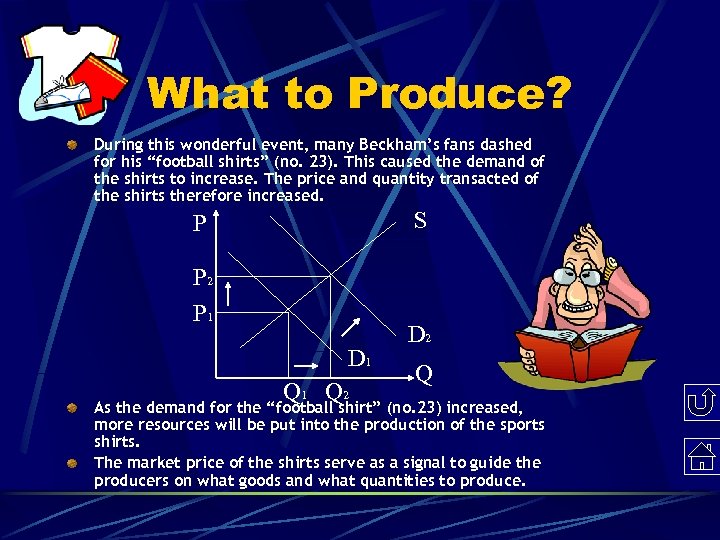 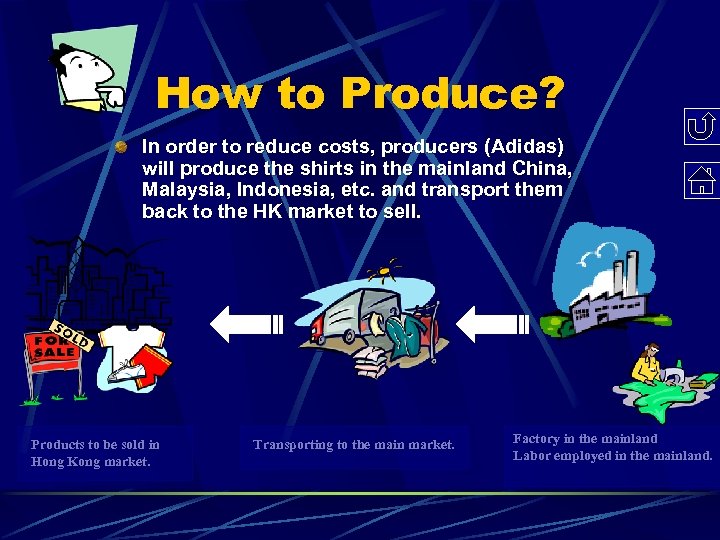 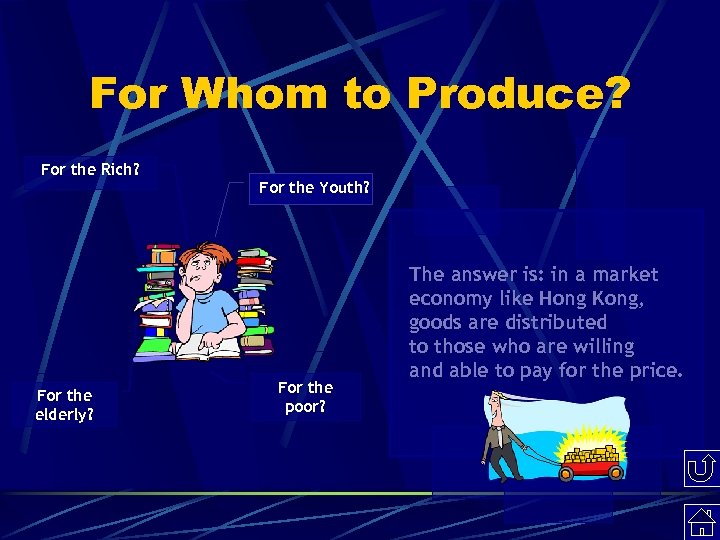 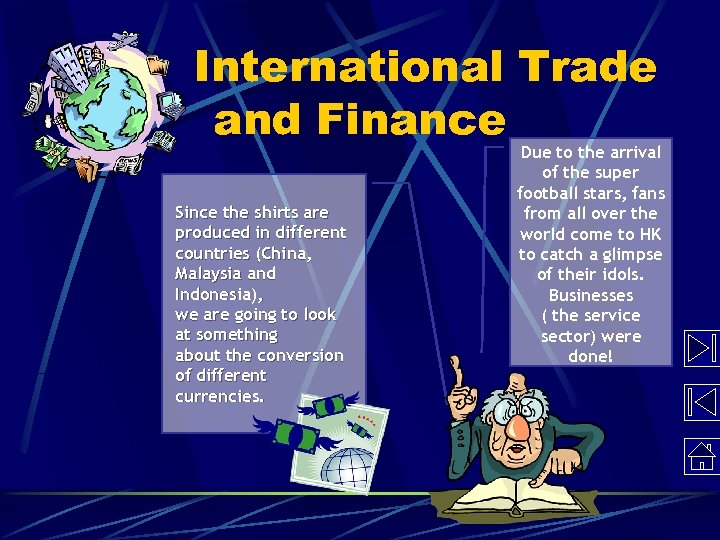 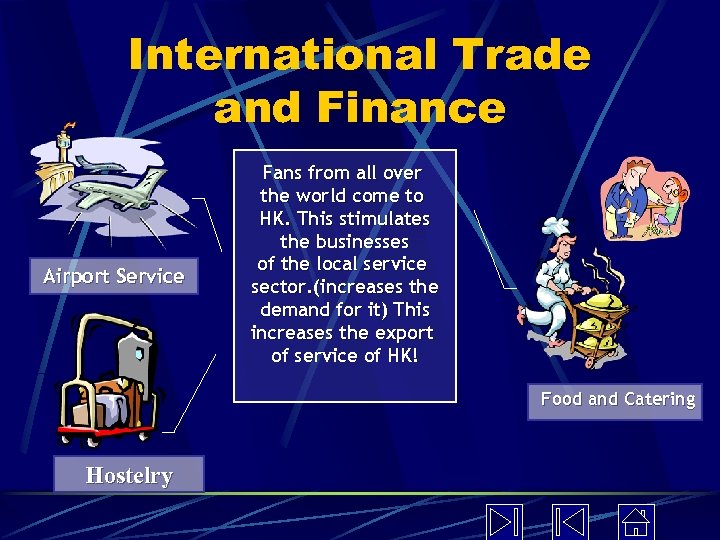 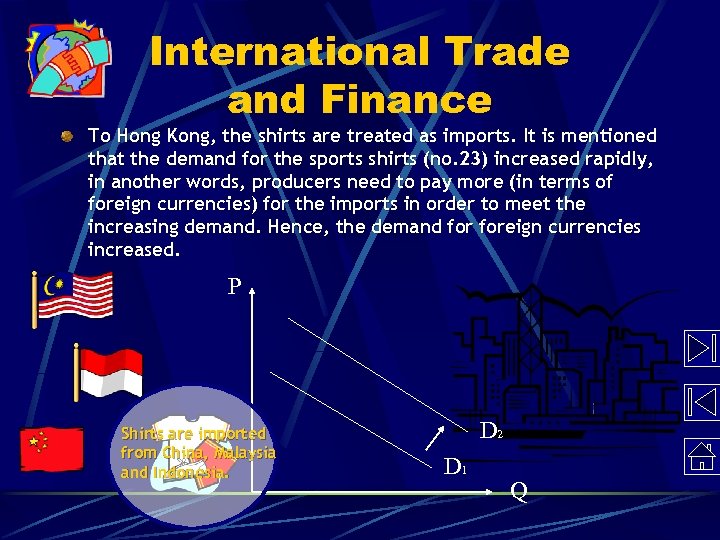 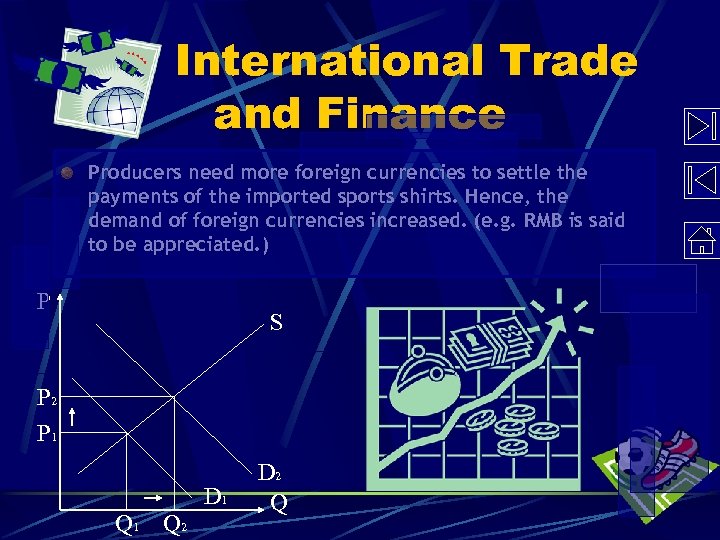 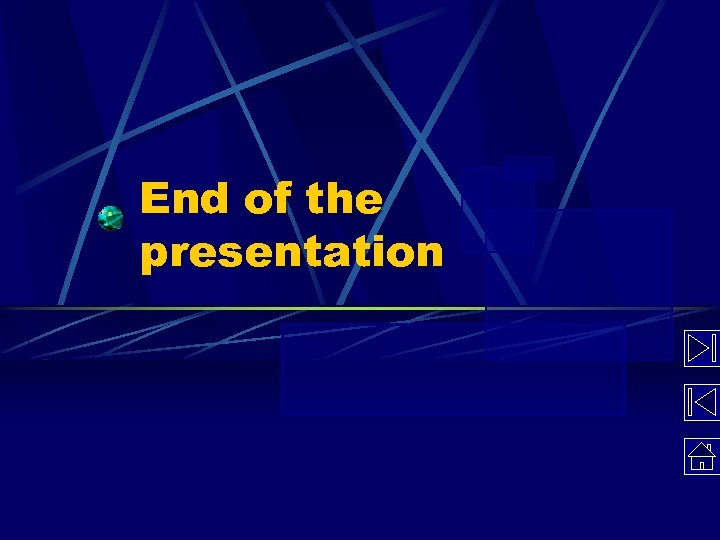 News abstract Hong Kong, July 30, 2003 – The Hong Kong Football Association (HKFA) today announced that tickets for the eagerly-awaited Real Madrid match will go on sale to the public from Thursday July 31 at 9 pm at the Hong Kong Stadium. Eager fans began queuing outside the stadium on Monday, and demand for tickets is expected to be high.

Why did people queue up? Fixed no. of seat in the stadium? ? Price of tickets are set below the equilibrium? ? P S PE P 1 P. S. see explanations here! Excess Demand D Q

Since the no of seat of the stadium is fixed, the supply of the tickets are hence perfectly inelastic. (i. e. a vertical supply curve. ) P S A black market MAY be created! PE P 1 Excess demand D Q The price of the tickets is set below equilibrium. The Quantity supplied is less than the quantity demanded. Excess demand arises. So, queues appeared.

News Abstract: (From 9 th Aug. Ming Pao “Editorial Creative Soccer Business”) REAL MADRID has raised a whirlwind here. Tickets for their match were instantly snapped up and have been resold at huge profits. Fans have flocked to see their stars. P S Even though the price is higher than the normal one, it cannot be set infinitely. It has to be accepted by the buyers. Or no one will buy the tickets. PE (The black market is cleared at this price. ) 1 P Excess demand D Q

What to Produce? During this wonderful event, many Beckham’s fans dashed for his “football shirts” (no. 23). This caused the demand of the shirts to increase. The price and quantity transacted of the shirts therefore increased. S P P 2 P 1 D 1 Q 2 D 2 Q As the demand for the “football shirt” (no. 23) increased, more resources will be put into the production of the sports shirts. The market price of the shirts serve as a signal to guide the producers on what goods and what quantities to produce.

How to Produce? In order to reduce costs, producers (Adidas) will produce the shirts in the mainland China, Malaysia, Indonesia, etc. and transport them back to the HK market to sell. Products to be sold in Hong Kong market. Transporting to the main market. Factory in the mainland Labor employed in the mainland.

For Whom to Produce? For the Rich? For the elderly? For the Youth? For the poor? The answer is: in a market economy like Hong Kong, goods are distributed to those who are willing and able to pay for the price.

International Trade and Finance Since the shirts are produced in different countries (China, Malaysia and Indonesia), we are going to look at something about the conversion of different currencies. Due to the arrival of the super football stars, fans from all over the world come to HK to catch a glimpse of their idols. Businesses ( the service sector) were done!

International Trade and Finance Airport Service Fans from all over the world come to HK. This stimulates the businesses of the local service sector. (increases the demand for it) This increases the export of service of HK! Food and Catering Hostelry

International Trade and Finance To Hong Kong, the shirts are treated as imports. It is mentioned that the demand for the sports shirts (no. 23) increased rapidly, in another words, producers need to pay more (in terms of foreign currencies) for the imports in order to meet the increasing demand. Hence, the demand foreign currencies increased. P Shirts are imported from China, Malaysia and Indonesia. D 2 D 1 Q

End of the presentation