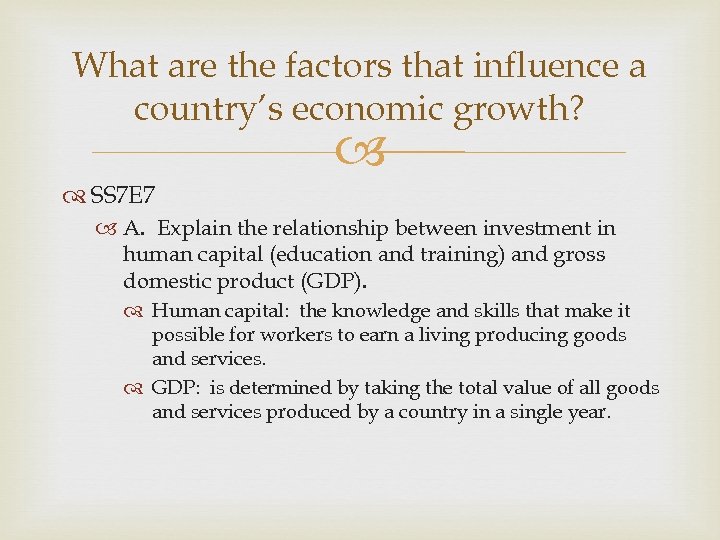 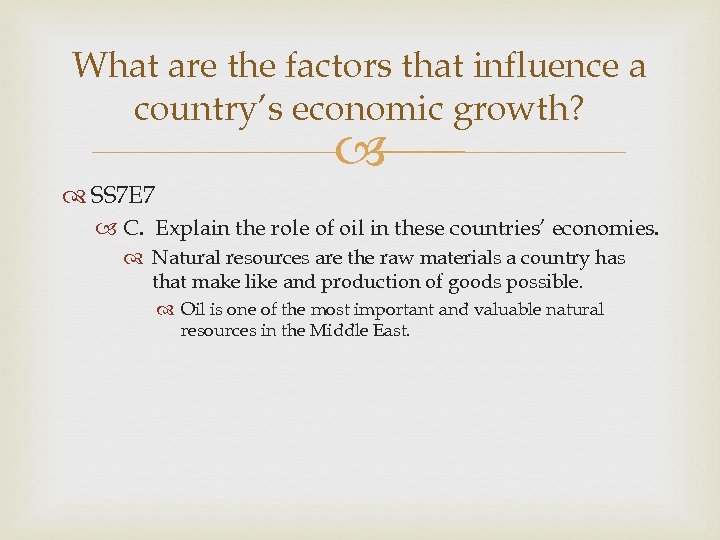 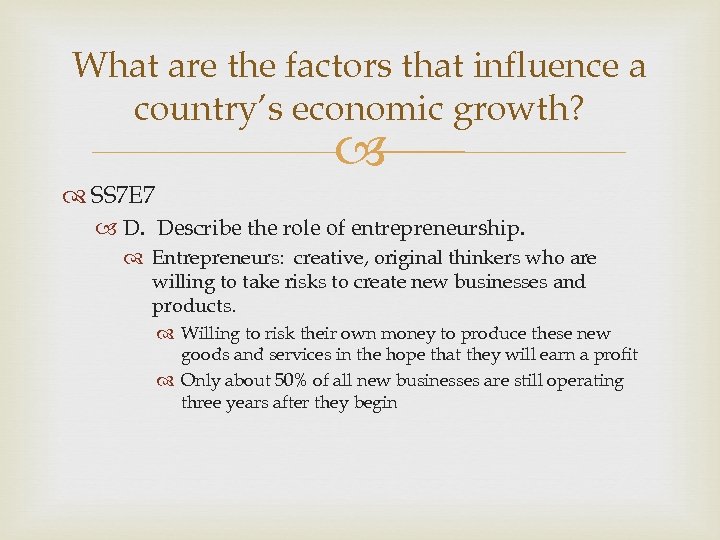 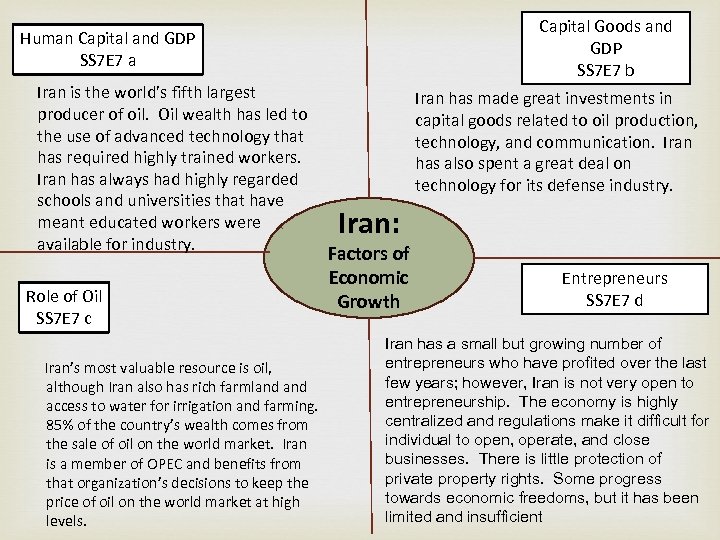 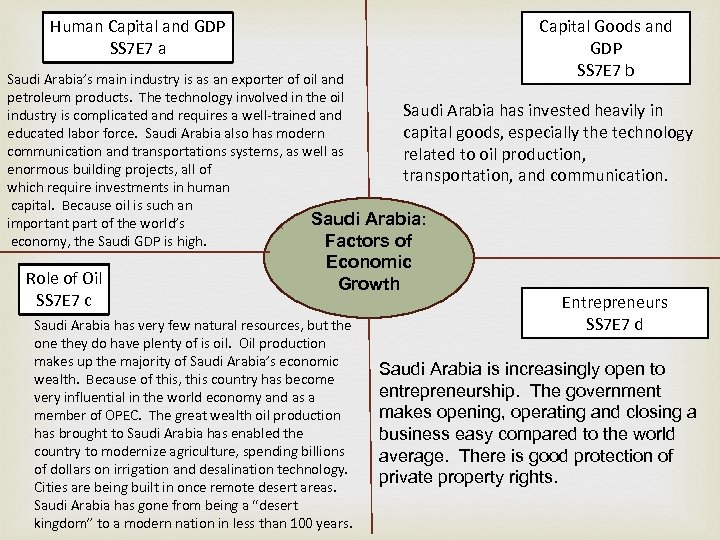 Economic Growth in the Middle East SS 7 E 7 The Student will describe factors that influence economic growth and examine their presence or absence in Israel, Saudi Arabia, and Iran

What are the factors that influence a country’s economic growth? SS 7 E 7 A. Explain the relationship between investment in human capital (education and training) and gross domestic product (GDP). Human capital: the knowledge and skills that make it possible for workers to earn a living producing goods and services. GDP: is determined by taking the total value of all goods and services produced by a country in a single year.

What are the factors that influence a country’s economic growth? SS 7 E 7 B. Explain the relationship between investment in capital (factories, machinery, technology) and gross domestic product (GDP). Capital goods: the factories, machines, and technology that people use to make other goods Being able to produce more goods for sale in a quicker and more efficient way leads to economic growth and greater profit.

What are the factors that influence a country’s economic growth? SS 7 E 7 C. Explain the role of oil in these countries’ economies. Natural resources are the raw materials a country has that make like and production of goods possible. Oil is one of the most important and valuable natural resources in the Middle East.

What are the factors that influence a country’s economic growth? SS 7 E 7 D. Describe the role of entrepreneurship. Entrepreneurs: creative, original thinkers who are willing to take risks to create new businesses and products. Willing to risk their own money to produce these new goods and services in the hope that they will earn a profit Only about 50% of all new businesses are still operating three years after they begin

Capital Goods and GDP SS 7 E 7 b Human Capital and GDP SS 7 E 7 a Iran is the world’s fifth largest producer of oil. Oil wealth has led to the use of advanced technology that has required highly trained workers. Iran has always had highly regarded schools and universities that have meant educated workers were available for industry. Role of Oil SS 7 E 7 c Iran’s most valuable resource is oil, although Iran also has rich farmland access to water for irrigation and farming. 85% of the country’s wealth comes from the sale of oil on the world market. Iran is a member of OPEC and benefits from that organization’s decisions to keep the price of oil on the world market at high levels. Iran has made great investments in capital goods related to oil production, technology, and communication. Iran has also spent a great deal on technology for its defense industry. Iran: Factors of Economic Growth Entrepreneurs SS 7 E 7 d Iran has a small but growing number of entrepreneurs who have profited over the last few years; however, Iran is not very open to entrepreneurship. The economy is highly centralized and regulations make it difficult for individual to open, operate, and close businesses. There is little protection of private property rights. Some progress towards economic freedoms, but it has been limited and insufficient

What to Goods and Capital produce? GDP SS 7 E 7 b Human Capital and GDP SS 7 E 7 a Israel has wide access to education and an Israel has invested heavily in capital economy that depends on technology industries to goods, as so much of their economy make up for the country’s lack of natural resources. depends on technology and industrial Many Israelis work in industries related to medial production, as well as advanced technology, agricultural technology, mining, and communication systems. Israel has electronics. They also have highly developed services industries. GDP is very also invested heavily in the high because they have invested heavily Israel: technology involved in their human capital. Factors of defense industry. Role of Oil SS 7 E 7 c Economic Growth Israel has few natural resources practically no oil at all. Israel does not have a highly developed industrial economy, so the world price of oil has a huge impact on the Israeli economy. Israel has to find other natural resources to develop in order to help their economy grow. Israel’s economy depends more on technology than on the development of natural resources, but this also means Israel must always purchase oil to keep industries going. For whom to Entrepreneurs produce? SS 7 E 7 d Israel is moderately open to entrepreneurship. It is relatively easy to start a business, but it takes longer than the world average to start it up. Private property rights are well protected by law.

What to Goods and Capital produce? GDP SS 7 E 7 b Human Capital and GDP SS 7 E 7 a Saudi Arabia’s main industry is as an exporter of oil and petroleum products. The technology involved in the oil Saudi Arabia has invested heavily in industry is complicated and requires a well-trained and educated labor force. Saudi Arabia also has modern capital goods, especially the technology communication and transportations systems, as well as related to oil production, enormous building projects, all of transportation, and communication. which require investments in human capital. Because oil is such an Saudi Arabia: important part of the world’s economy, the Saudi GDP is high. Factors of Role of Oil SS 7 E 7 c Economic Growth Saudi Arabia has very few natural resources, but the one they do have plenty of is oil. Oil production makes up the majority of Saudi Arabia’s economic wealth. Because of this, this country has become very influential in the world economy and as a member of OPEC. The great wealth oil production has brought to Saudi Arabia has enabled the country to modernize agriculture, spending billions of dollars on irrigation and desalination technology. Cities are being built in once remote desert areas. Saudi Arabia has gone from being a “desert kingdom” to a modern nation in less than 100 years. For whom to Entrepreneurs produce? SS 7 E 7 d Saudi Arabia is increasingly open to entrepreneurship. The government makes opening, operating and closing a business easy compared to the world average. There is good protection of private property rights.