Economic difficulty has had limited impact on global 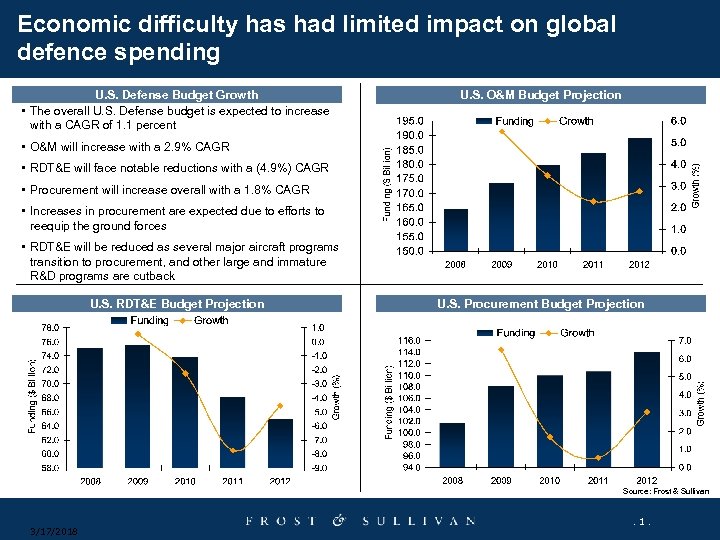 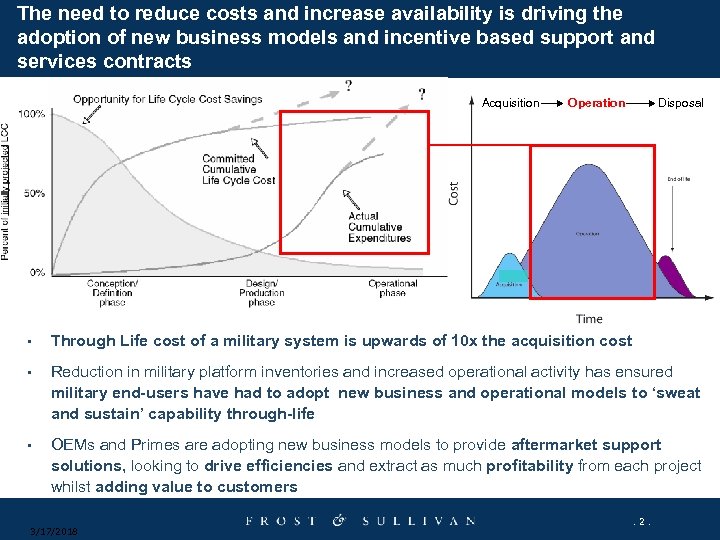 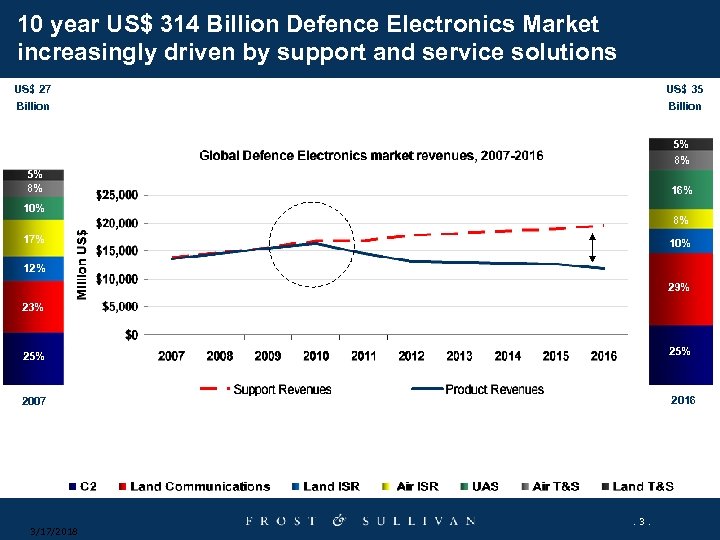 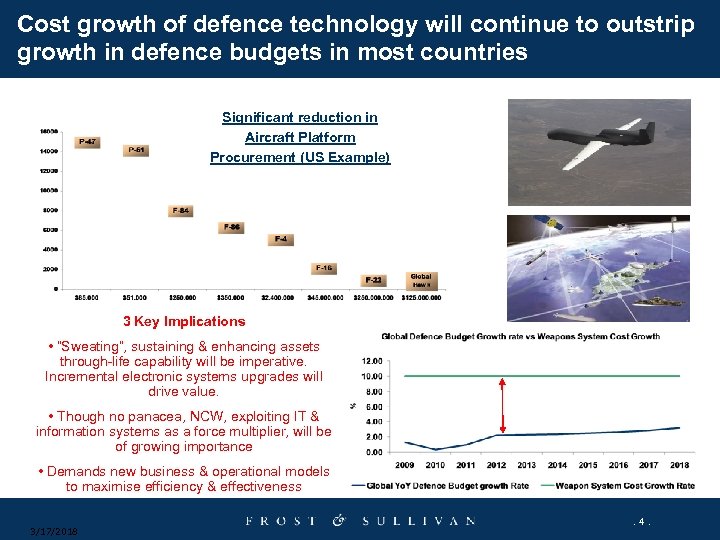 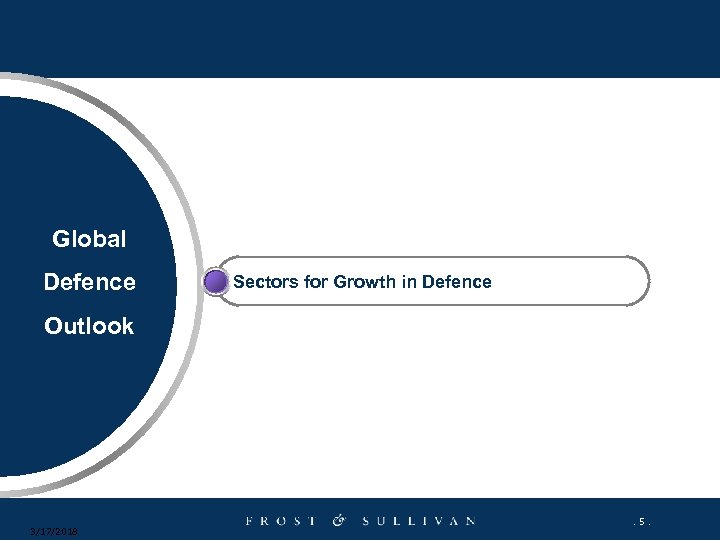 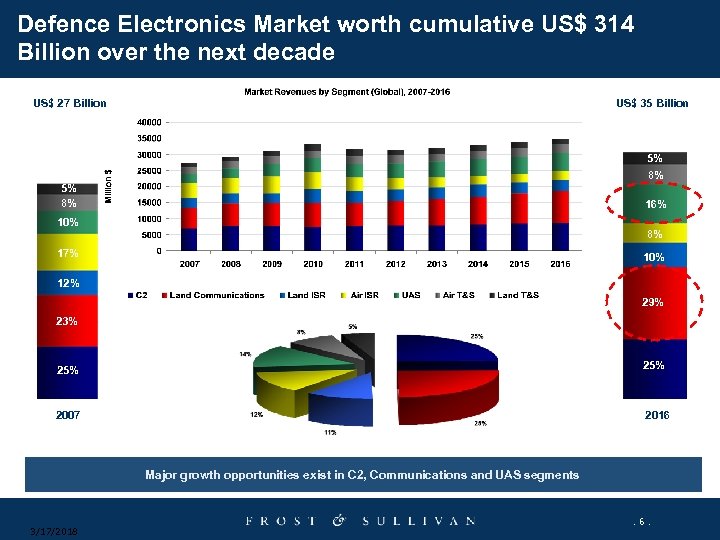 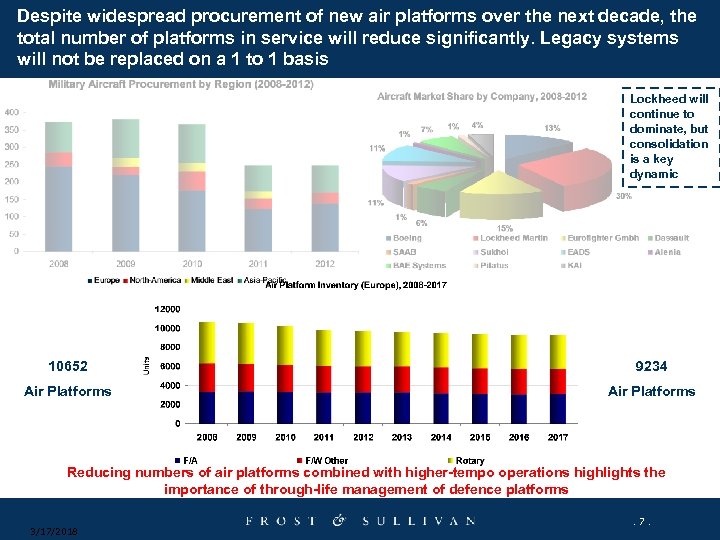 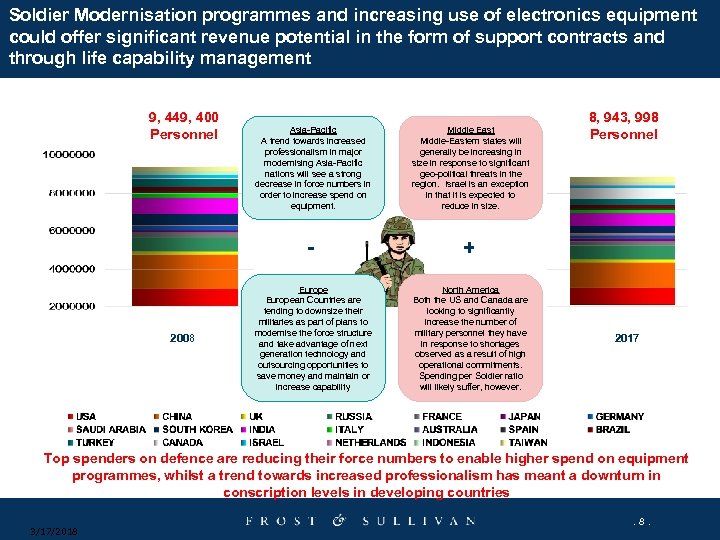 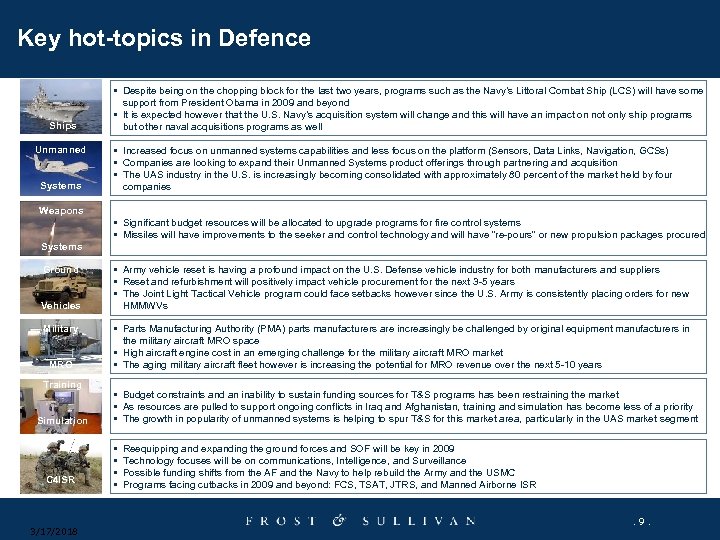 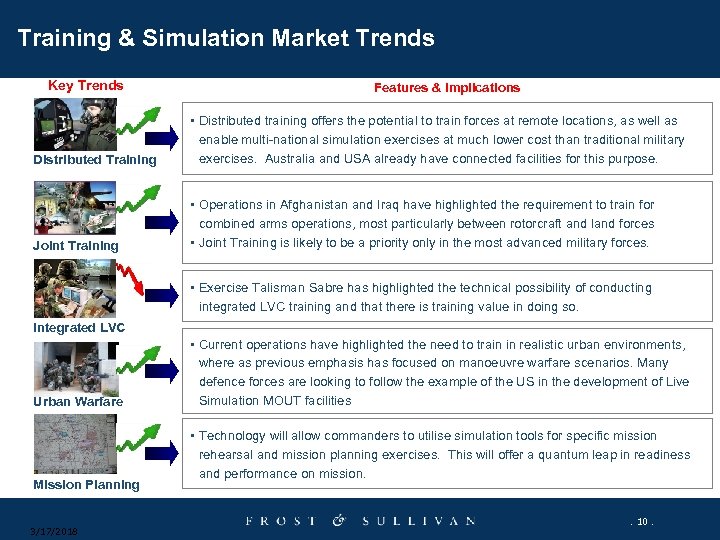 Скачать презентацию Economic difficulty has had limited impact on global

Economic difficulty has had limited impact on global defence spending U. S. Defense Budget Growth • The overall U. S. Defense budget is expected to increase with a CAGR of 1. 1 percent U. S. O&M Budget Projection • O&M will increase with a 2. 9% CAGR • RDT&E will face notable reductions with a (4. 9%) CAGR • Procurement will increase overall with a 1. 8% CAGR • Increases in procurement are expected due to efforts to reequip the ground forces • RDT&E will be reduced as several major aircraft programs transition to procurement, and other large and immature R&D programs are cutback U. S. RDT&E Budget Projection U. S. Procurement Budget Projection Source: Frost & Sullivan 3/17/2018 . 1.

The need to reduce costs and increase availability is driving the adoption of new business models and incentive based support and services contracts Acquisition Operation Disposal • Through Life cost of a military system is upwards of 10 x the acquisition cost • Reduction in military platform inventories and increased operational activity has ensured military end-users have had to adopt new business and operational models to ‘sweat and sustain’ capability through-life • OEMs and Primes are adopting new business models to provide aftermarket support solutions, looking to drive efficiencies and extract as much profitability from each project whilst adding value to customers 3/17/2018 . 2.

Despite widespread procurement of new air platforms over the next decade, the total number of platforms in service will reduce significantly. Legacy systems will not be replaced on a 1 to 1 basis Lockheed will continue to dominate, but consolidation is a key dynamic 10652 9234 Air Platforms Reducing numbers of air platforms combined with higher-tempo operations highlights the importance of through-life management of defence platforms 3/17/2018 . 7.

Soldier Modernisation programmes and increasing use of electronics equipment could offer significant revenue potential in the form of support contracts and through life capability management 9, 449, 400 Personnel Asia-Pacific A trend towards increased professionalism in major modernising Asia-Pacific nations will see a strong decrease in force numbers in order to increase spend on equipment. - 2008 European Countries are tending to downsize their militaries as part of plans to modernise the force structure and take advantage of next generation technology and outsourcing opportunities to save money and maintain or increase capability Middle East Middle-Eastern states will generally be increasing in size in response to significant geo-political threats in the region. Israel is an exception in that it is expected to reduce in size. 8, 943, 998 Personnel + North America Both the US and Canada are looking to significantly increase the number of military personnel they have in response to shortages observed as a result of high operational commitments. Spending per Soldier ratio will likely suffer, however. 2017 Top spenders on defence are reducing their force numbers to enable higher spend on equipment programmes, whilst a trend towards increased professionalism has meant a downturn in conscription levels in developing countries 3/17/2018 . 8.

Key hot-topics in Defence Ships Unmanned Systems • Despite being on the chopping block for the last two years, programs such as the Navy’s Littoral Combat Ship (LCS) will have some support from President Obama in 2009 and beyond • It is expected however that the U. S. Navy’s acquisition system will change and this will have an impact on not only ship programs but other naval acquisitions programs as well • Increased focus on unmanned systems capabilities and less focus on the platform (Sensors, Data Links, Navigation, GCSs) • Companies are looking to expand their Unmanned Systems product offerings through partnering and acquisition • The UAS industry in the U. S. is increasingly becoming consolidated with approximately 80 percent of the market held by four companies Weapons • Significant budget resources will be allocated to upgrade programs for fire control systems • Missiles will have improvements to the seeker and control technology and will have “re-pours” or new propulsion packages procured Systems Ground Vehicles Military MRO Training Simulation C 4 ISR 3/17/2018 • Army vehicle reset is having a profound impact on the U. S. Defense vehicle industry for both manufacturers and suppliers • Reset and refurbishment will positively impact vehicle procurement for the next 3 -5 years • The Joint Light Tactical Vehicle program could face setbacks however since the U. S. Army is consistently placing orders for new HMMWVs • Parts Manufacturing Authority (PMA) parts manufacturers are increasingly be challenged by original equipment manufacturers in the military aircraft MRO space • High aircraft engine cost in an emerging challenge for the military aircraft MRO market • The aging military aircraft fleet however is increasing the potential for MRO revenue over the next 5 -10 years • Budget constraints and an inability to sustain funding sources for T&S programs has been restraining the market • As resources are pulled to support ongoing conflicts in Iraq and Afghanistan, training and simulation has become less of a priority • The growth in popularity of unmanned systems is helping to spur T&S for this market area, particularly in the UAS market segment • • Reequipping and expanding the ground forces and SOF will be key in 2009 Technology focuses will be on communications, Intelligence, and Surveillance Possible funding shifts from the AF and the Navy to help rebuild the Army and the USMC Programs facing cutbacks in 2009 and beyond: FCS, TSAT, JTRS, and Manned Airborne ISR . 9.

Training & Simulation Market Trends Key Trends Features & Implications Distributed Training • Distributed training offers the potential to train forces at remote locations, as well as enable multi-national simulation exercises at much lower cost than traditional military exercises. Australia and USA already have connected facilities for this purpose. Joint Training • Operations in Afghanistan and Iraq have highlighted the requirement to train for combined arms operations, most particularly between rotorcraft and land forces • Joint Training is likely to be a priority only in the most advanced military forces. • Exercise Talisman Sabre has highlighted the technical possibility of conducting integrated LVC training and that there is training value in doing so. Integrated LVC Urban Warfare Mission Planning 3/17/2018 • Current operations have highlighted the need to train in realistic urban environments, where as previous emphasis has focused on manoeuvre warfare scenarios. Many defence forces are looking to follow the example of the US in the development of Live Simulation MOUT facilities • Technology will allow commanders to utilise simulation tools for specific mission rehearsal and mission planning exercises. This will offer a quantum leap in readiness and performance on mission. . 10.