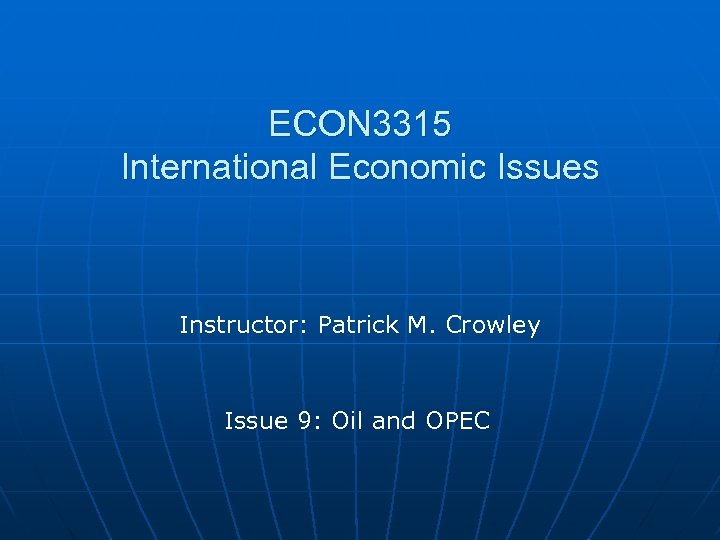 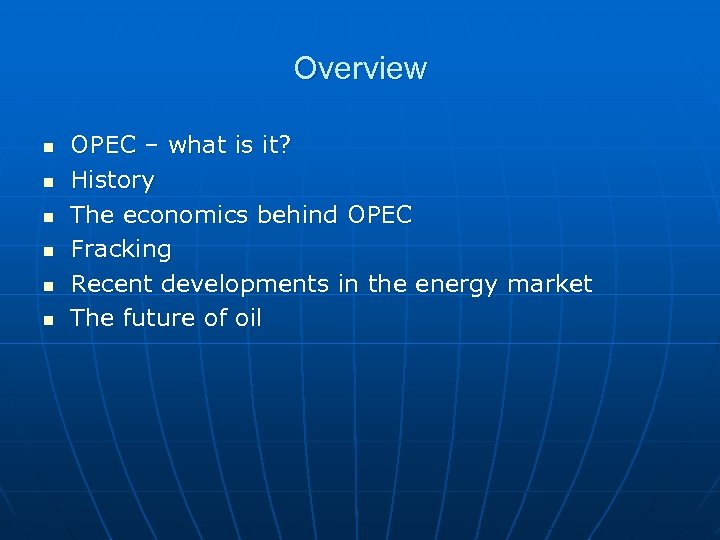 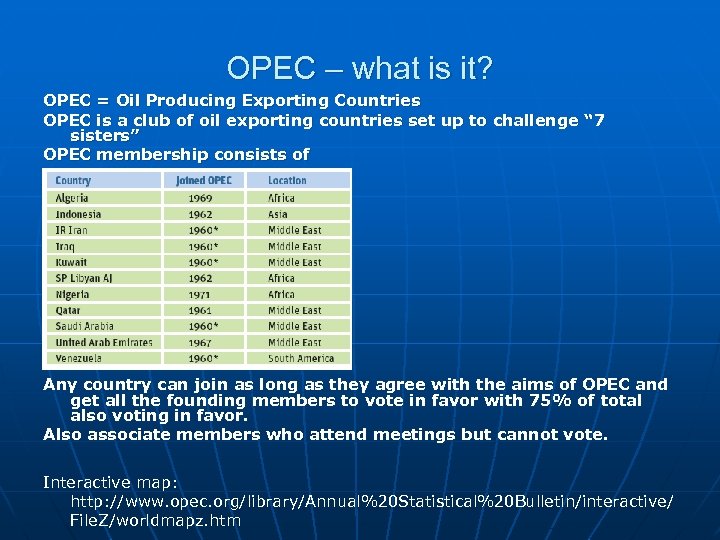 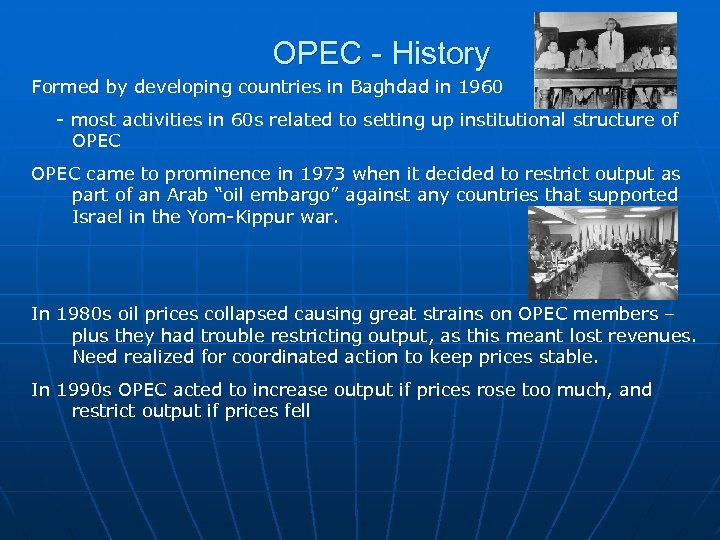 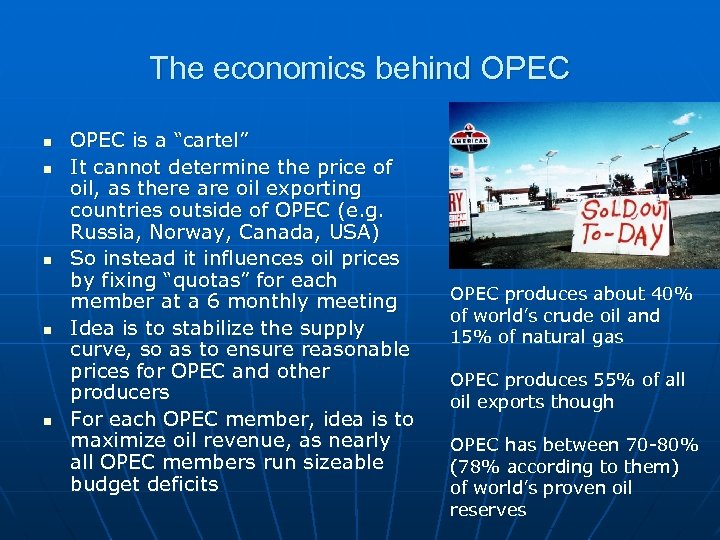 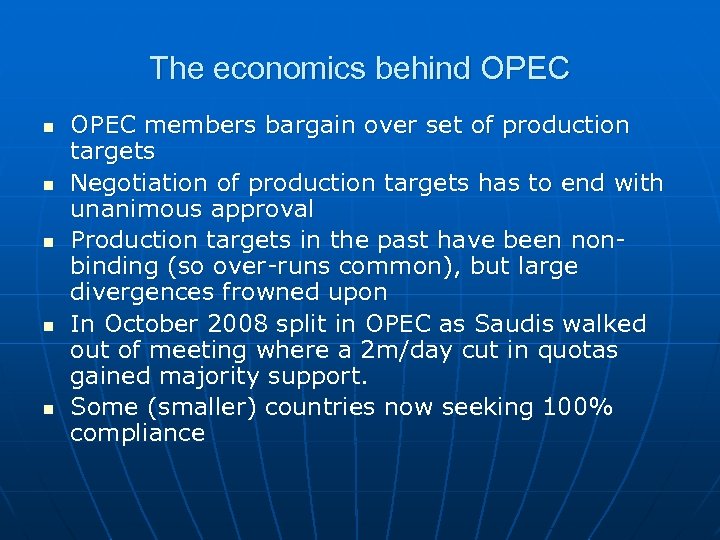 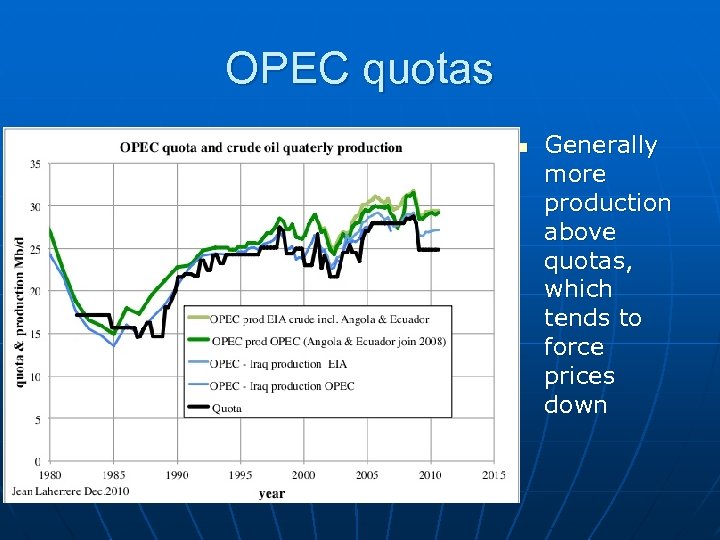 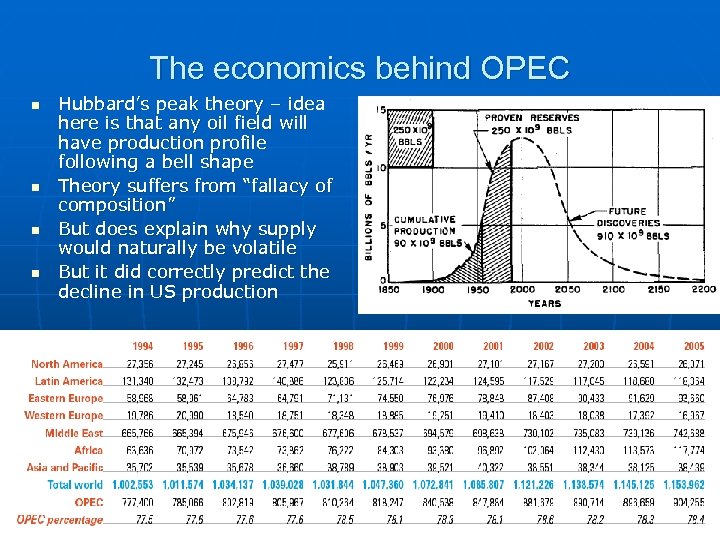 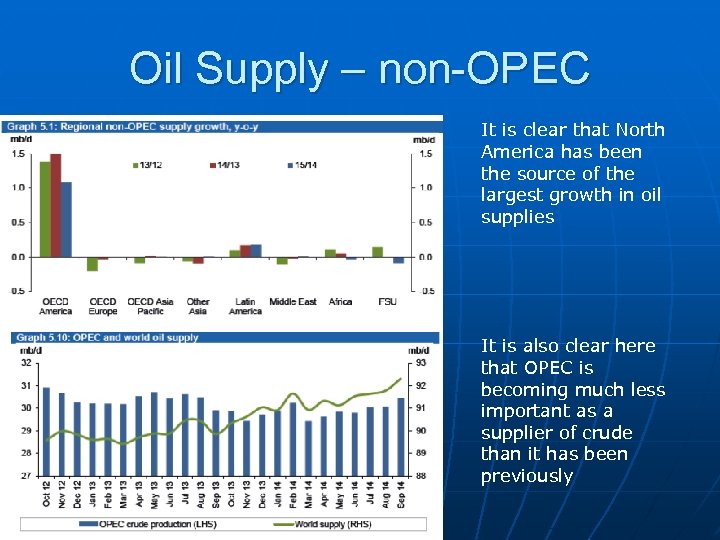 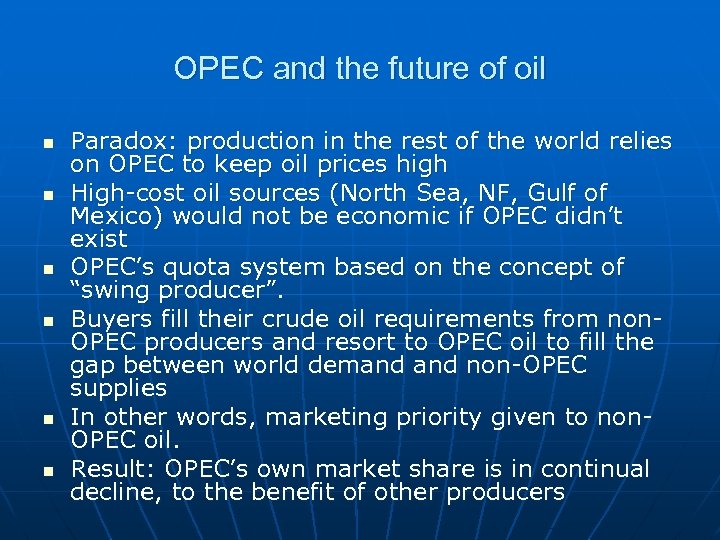 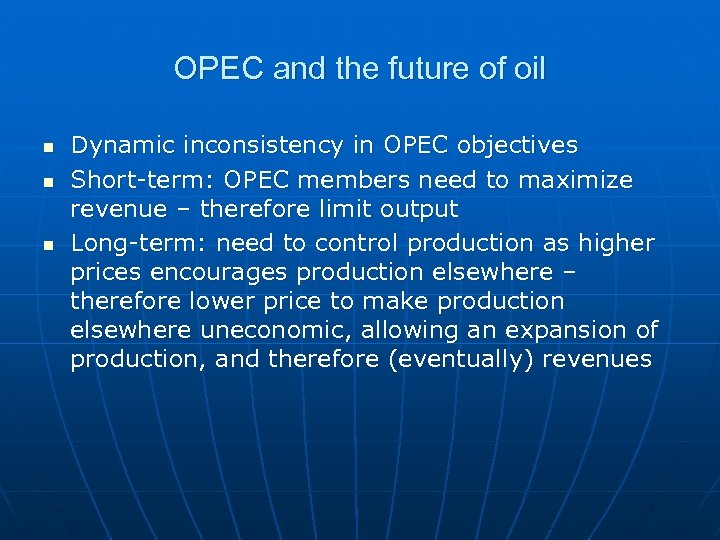 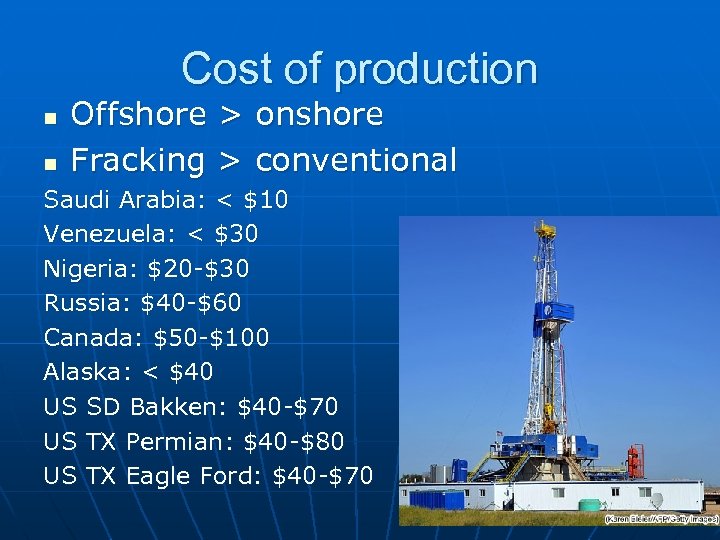 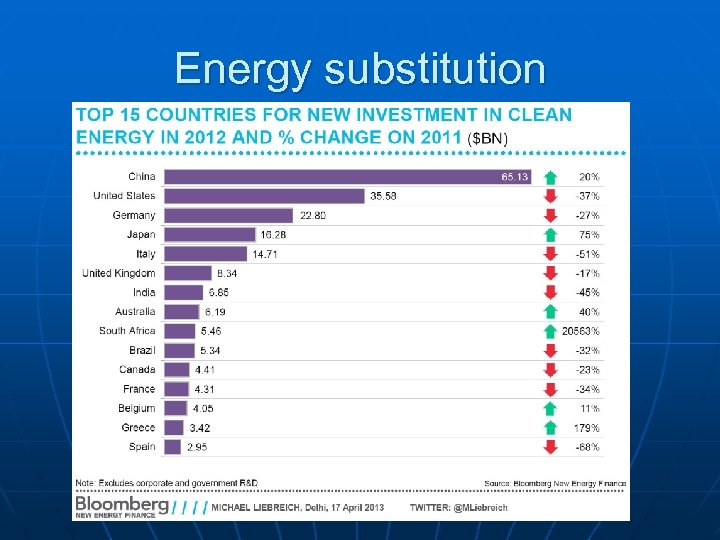 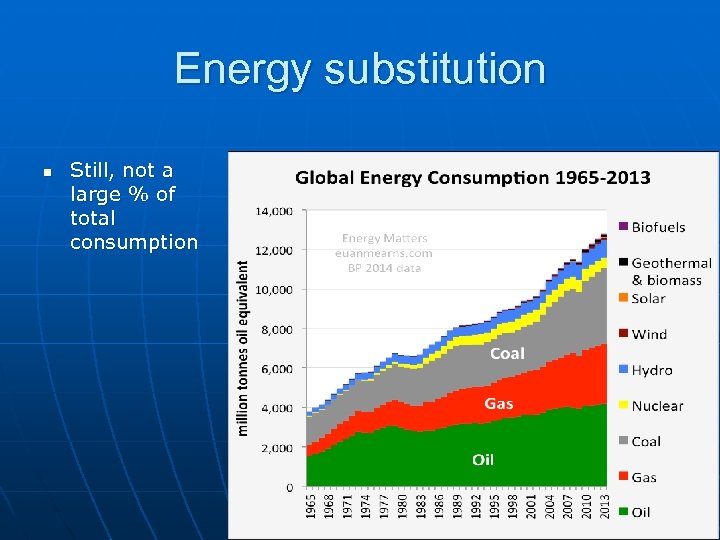 Overview n n n OPEC – what is it? History The economics behind OPEC Fracking Recent developments in the energy market The future of oil

OPEC – what is it? OPEC = Oil Producing Exporting Countries OPEC is a club of oil exporting countries set up to challenge “ 7 sisters” OPEC membership consists of Any country can join as long as they agree with the aims of OPEC and get all the founding members to vote in favor with 75% of total also voting in favor. Also associate members who attend meetings but cannot vote. Interactive map: http: //www. opec. org/library/Annual%20 Statistical%20 Bulletin/interactive/ File. Z/worldmapz. htm

OPEC - History Formed by developing countries in Baghdad in 1960 - most activities in 60 s related to setting up institutional structure of OPEC came to prominence in 1973 when it decided to restrict output as part of an Arab “oil embargo” against any countries that supported Israel in the Yom-Kippur war. In 1980 s oil prices collapsed causing great strains on OPEC members – plus they had trouble restricting output, as this meant lost revenues. Need realized for coordinated action to keep prices stable. In 1990 s OPEC acted to increase output if prices rose too much, and restrict output if prices fell

The economics behind OPEC n n n OPEC is a “cartel” It cannot determine the price of oil, as there are oil exporting countries outside of OPEC (e. g. Russia, Norway, Canada, USA) So instead it influences oil prices by fixing “quotas” for each member at a 6 monthly meeting Idea is to stabilize the supply curve, so as to ensure reasonable prices for OPEC and other producers For each OPEC member, idea is to maximize oil revenue, as nearly all OPEC members run sizeable budget deficits OPEC produces about 40% of world’s crude oil and 15% of natural gas OPEC produces 55% of all oil exports though OPEC has between 70 -80% (78% according to them) of world’s proven oil reserves

The economics behind OPEC n n n OPEC members bargain over set of production targets Negotiation of production targets has to end with unanimous approval Production targets in the past have been nonbinding (so over-runs common), but large divergences frowned upon In October 2008 split in OPEC as Saudis walked out of meeting where a 2 m/day cut in quotas gained majority support. Some (smaller) countries now seeking 100% compliance

OPEC and the future of oil n n n Paradox: production in the rest of the world relies on OPEC to keep oil prices high High-cost oil sources (North Sea, NF, Gulf of Mexico) would not be economic if OPEC didn’t exist OPEC’s quota system based on the concept of “swing producer”. Buyers fill their crude oil requirements from non. OPEC producers and resort to OPEC oil to fill the gap between world demand non-OPEC supplies In other words, marketing priority given to non. OPEC oil. Result: OPEC’s own market share is in continual decline, to the benefit of other producers

Energy substitution n Still, not a large % of total consumption