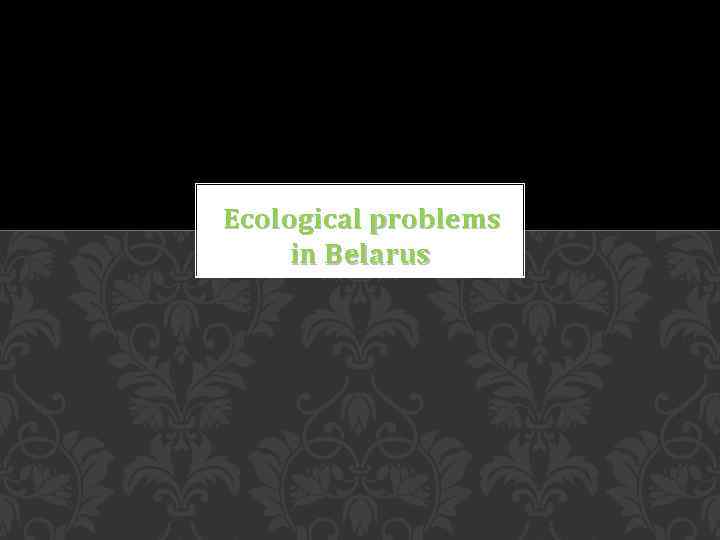 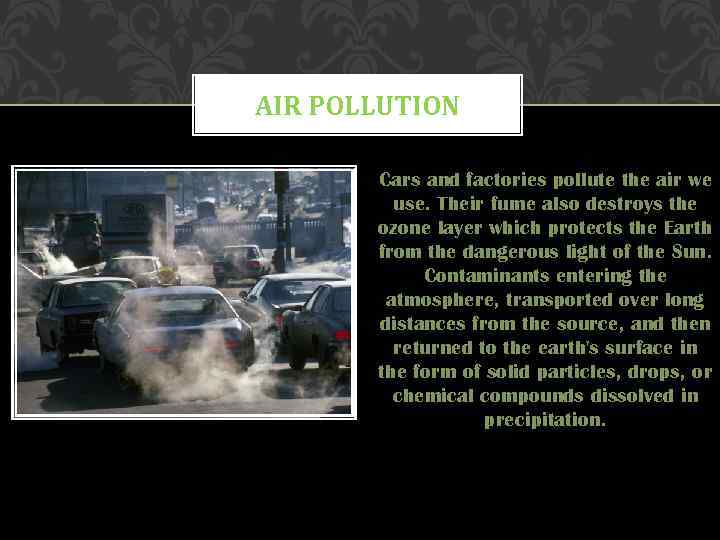 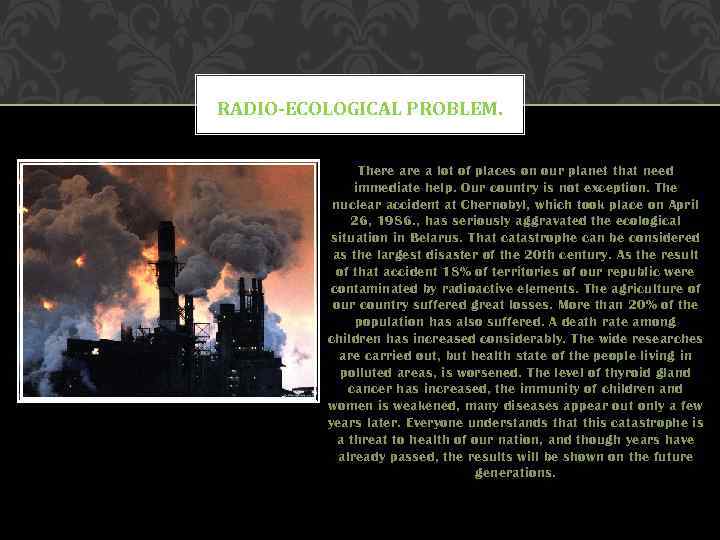 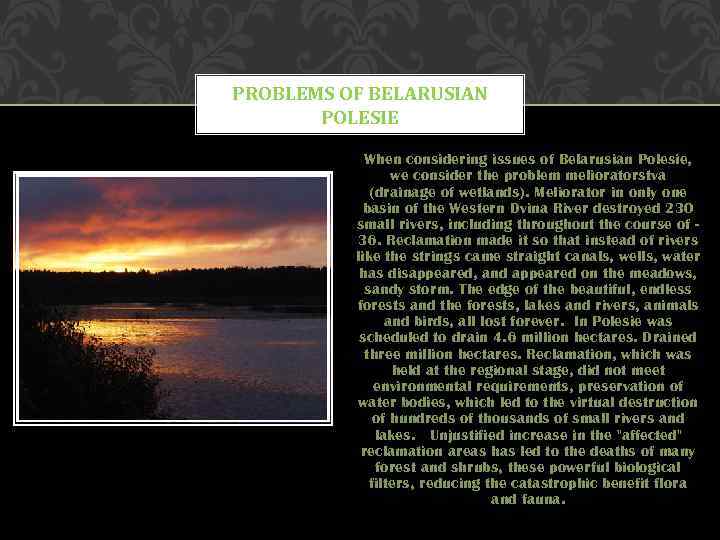 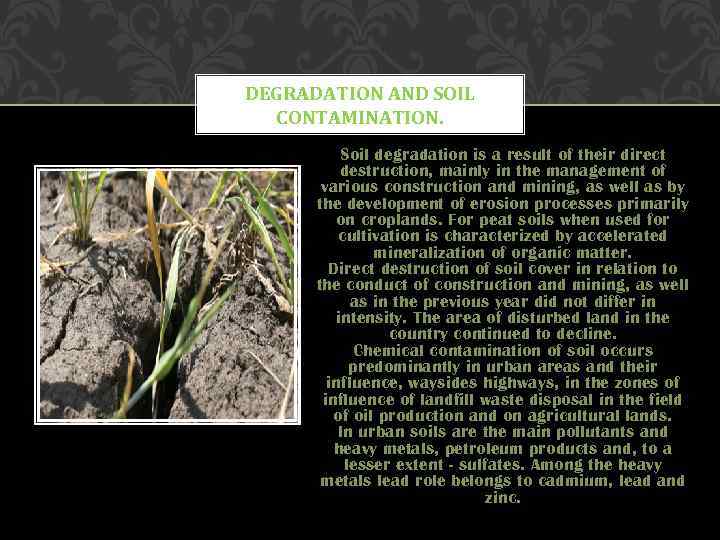 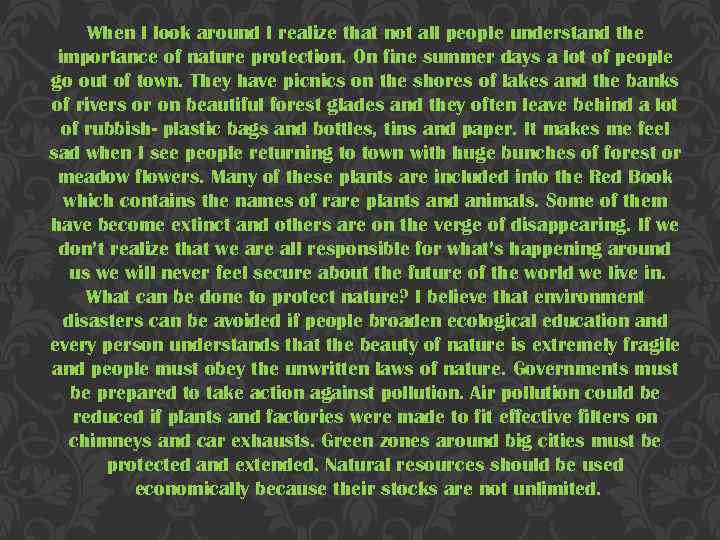 AIR POLLUTION Cars and factories pollute the air we use. Their fume also destroys the ozone layer which protects the Earth from the dangerous light of the Sun. Contaminants entering the atmosphere, transported over long distances from the source, and then returned to the earth's surface in the form of solid particles, drops, or chemical compounds dissolved in precipitation.

RADIO-ECOLOGICAL PROBLEM. There a lot of places on our planet that need immediate help. Our country is not exception. The nuclear accident at Chernobyl, which took place on April 26, 1986. , has seriously aggravated the ecological situation in Belarus. That catastrophe can be considered as the largest disaster of the 20 th century. As the result of that accident 18% of territories of our republic were contaminated by radioactive elements. The agriculture of our country suffered great losses. More than 20% of the population has also suffered. A death rate among children has increased considerably. The wide researches are carried out, but health state of the people living in polluted areas, is worsened. The level of thyroid gland cancer has increased, the immunity of children and women is weakened, many diseases appear out only a few years later. Everyone understands that this catastrophe is a threat to health of our nation, and though years have already passed, the results will be shown on the future generations.

PROBLEMS OF BELARUSIAN POLESIE When considering issues of Belarusian Polesie, we consider the problem melioratorstva (drainage of wetlands). Meliorator in only one basin of the Western Dvina River destroyed 230 small rivers, including throughout the course of 36. Reclamation made it so that instead of rivers like the strings came straight canals, wells, water has disappeared, and appeared on the meadows, sandy storm. The edge of the beautiful, endless forests and the forests, lakes and rivers, animals and birds, all lost forever. In Polesie was scheduled to drain 4. 6 million hectares. Drained three million hectares. Reclamation, which was held at the regional stage, did not meet environmental requirements, preservation of water bodies, which led to the virtual destruction of hundreds of thousands of small rivers and lakes. Unjustified increase in the "affected" reclamation areas has led to the deaths of many forest and shrubs, these powerful biological filters, reducing the catastrophic benefit flora and fauna.

DEGRADATION AND SOIL CONTAMINATION. Soil degradation is a result of their direct destruction, mainly in the management of various construction and mining, as well as by the development of erosion processes primarily on croplands. For peat soils when used for cultivation is characterized by accelerated mineralization of organic matter. Direct destruction of soil cover in relation to the conduct of construction and mining, as well as in the previous year did not differ in intensity. The area of disturbed land in the country continued to decline. Chemical contamination of soil occurs predominantly in urban areas and their influence, waysides highways, in the zones of influence of landfill waste disposal in the field of oil production and on agricultural lands. In urban soils are the main pollutants and heavy metals, petroleum products and, to a lesser extent - sulfates. Among the heavy metals lead role belongs to cadmium, lead and zinc.

When I look around I realize that not all people understand the importance of nature protection. On fine summer days a lot of people go out of town. They have picnics on the shores of lakes and the banks of rivers or on beautiful forest glades and they often leave behind a lot of rubbish- plastic bags and bottles, tins and paper. It makes me feel sad when I see people returning to town with huge bunches of forest or meadow flowers. Many of these plants are included into the Red Book which contains the names of rare plants and animals. Some of them have become extinct and others are on the verge of disappearing. If we don’t realize that we are all responsible for what’s happening around us we will never feel secure about the future of the world we live in. What can be done to protect nature? I believe that environment disasters can be avoided if people broaden ecological education and every person understands that the beauty of nature is extremely fragile and people must obey the unwritten laws of nature. Governments must be prepared to take action against pollution. Air pollution could be reduced if plants and factories were made to fit effective filters on chimneys and car exhausts. Green zones around big cities must be protected and extended. Natural resources should be used economically because their stocks are not unlimited.

New Year and Christmas in the Republic of

Ecological Problems Pollution and protection of our environment