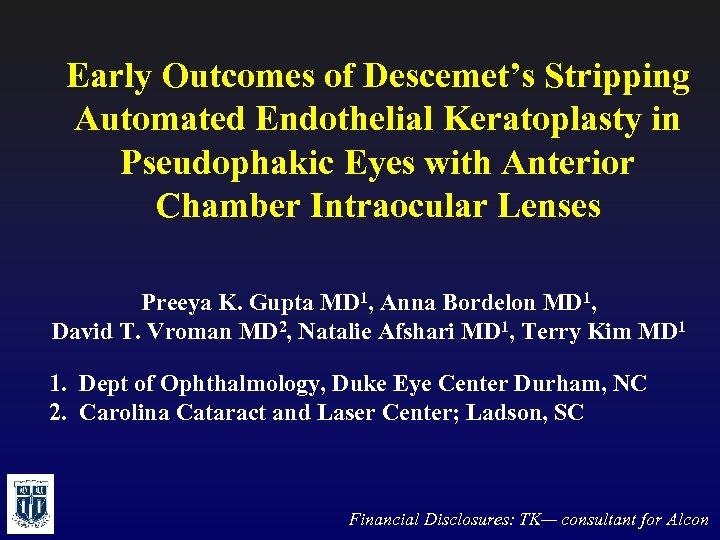 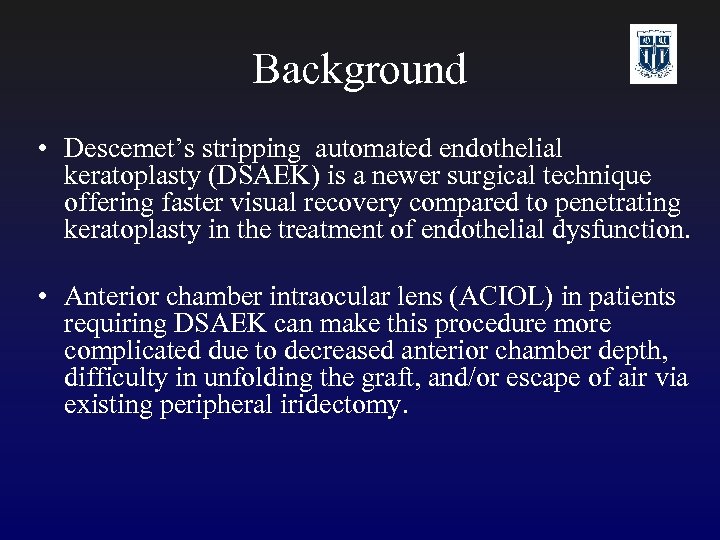 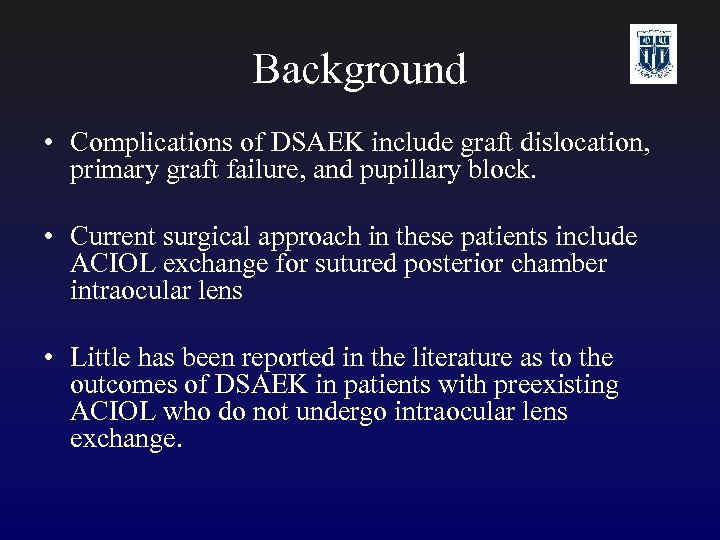 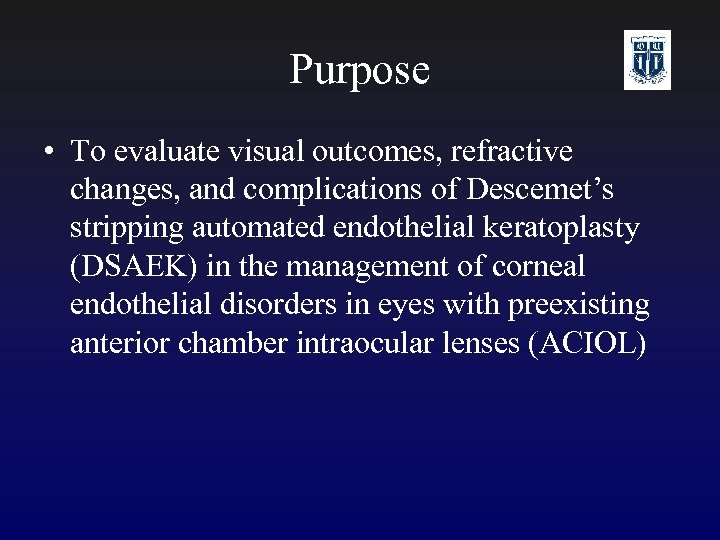 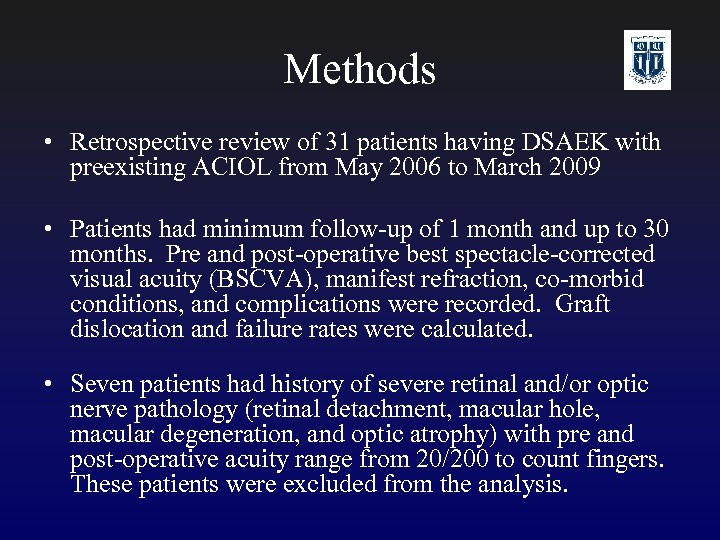 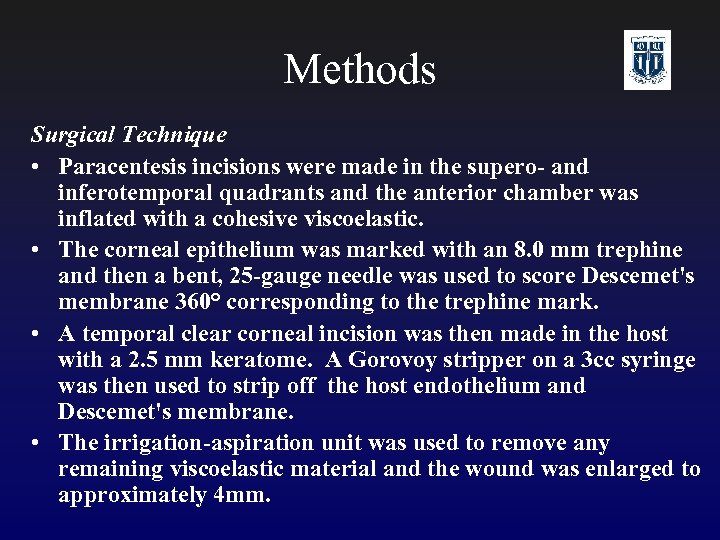 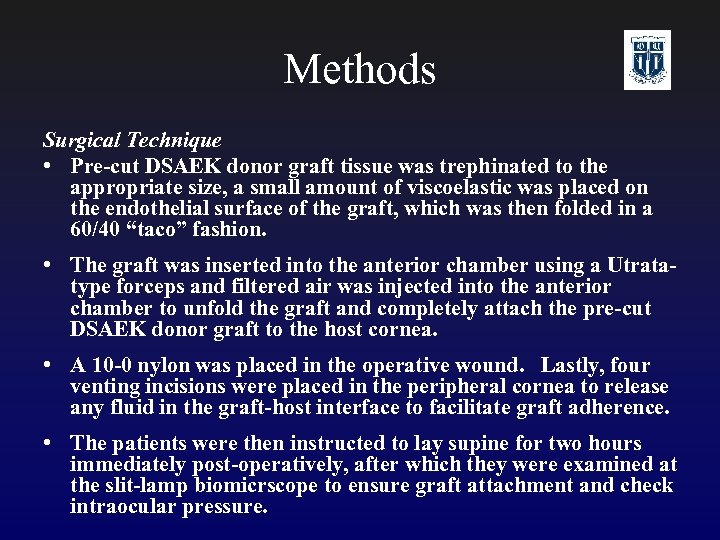 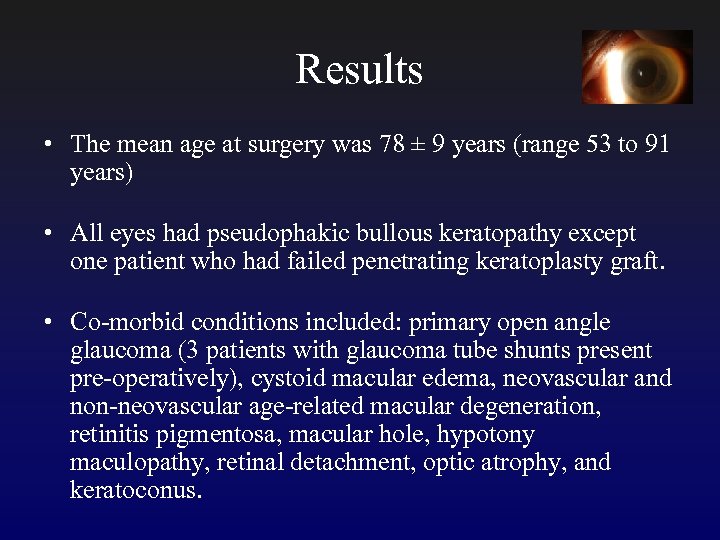 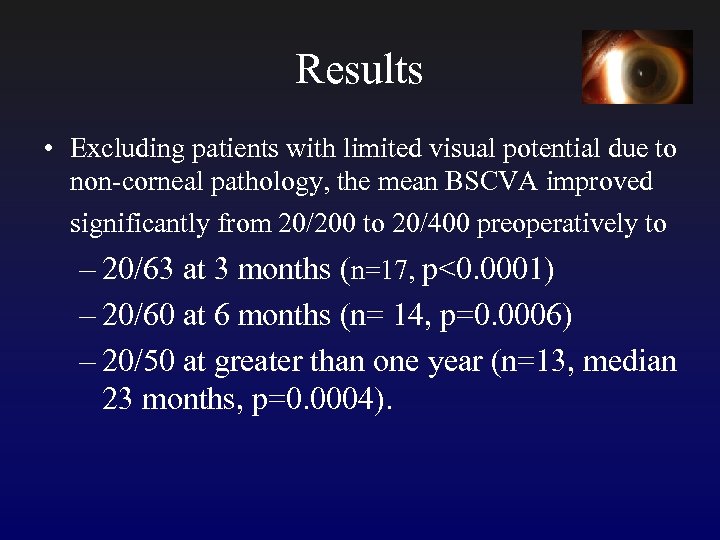 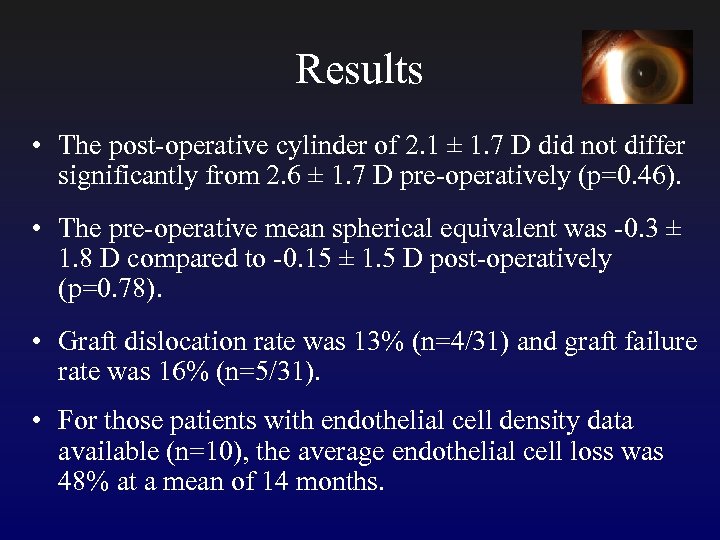 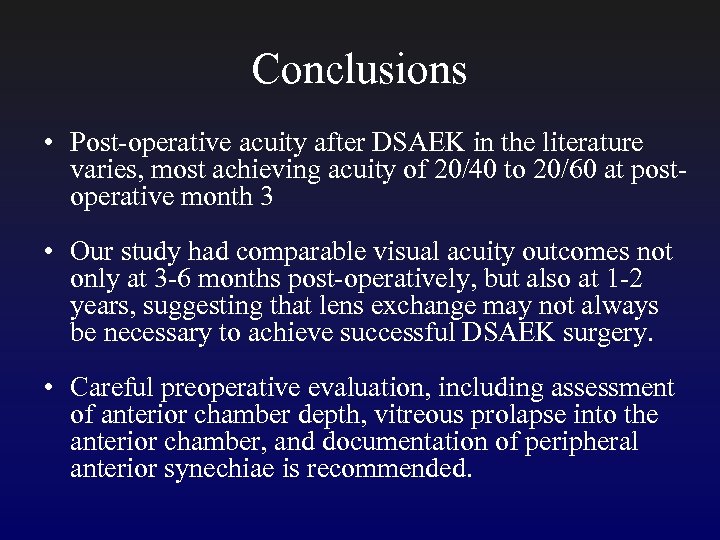 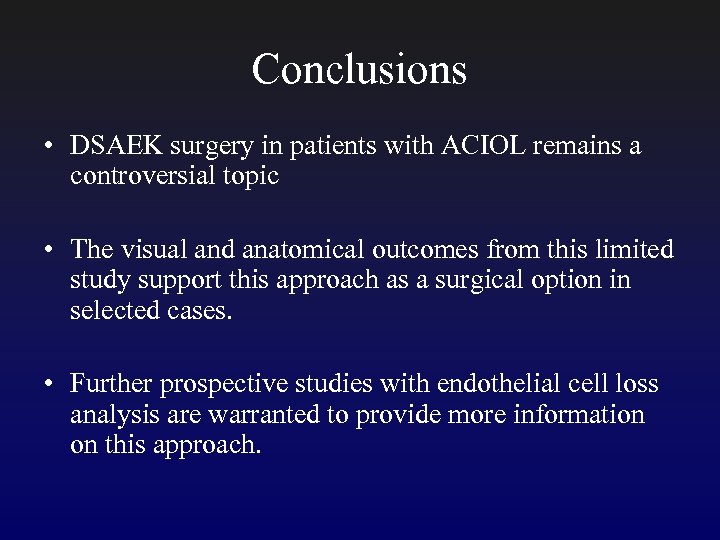 Background • Complications of DSAEK include graft dislocation, primary graft failure, and pupillary block. • Current surgical approach in these patients include ACIOL exchange for sutured posterior chamber intraocular lens • Little has been reported in the literature as to the outcomes of DSAEK in patients with preexisting ACIOL who do not undergo intraocular lens exchange.

Methods • Retrospective review of 31 patients having DSAEK with preexisting ACIOL from May 2006 to March 2009 • Patients had minimum follow-up of 1 month and up to 30 months. Pre and post-operative best spectacle-corrected visual acuity (BSCVA), manifest refraction, co-morbid conditions, and complications were recorded. Graft dislocation and failure rates were calculated. • Seven patients had history of severe retinal and/or optic nerve pathology (retinal detachment, macular hole, macular degeneration, and optic atrophy) with pre and post-operative acuity range from 20/200 to count fingers. These patients were excluded from the analysis.

Methods Surgical Technique • Paracentesis incisions were made in the supero- and inferotemporal quadrants and the anterior chamber was inflated with a cohesive viscoelastic. • The corneal epithelium was marked with an 8. 0 mm trephine and then a bent, 25 -gauge needle was used to score Descemet's membrane 360° corresponding to the trephine mark. • A temporal clear corneal incision was then made in the host with a 2. 5 mm keratome. A Gorovoy stripper on a 3 cc syringe was then used to strip off the host endothelium and Descemet's membrane. • The irrigation-aspiration unit was used to remove any remaining viscoelastic material and the wound was enlarged to approximately 4 mm.

Methods Surgical Technique • Pre-cut DSAEK donor graft tissue was trephinated to the appropriate size, a small amount of viscoelastic was placed on the endothelial surface of the graft, which was then folded in a 60/40 “taco” fashion. • The graft was inserted into the anterior chamber using a Utratatype forceps and filtered air was injected into the anterior chamber to unfold the graft and completely attach the pre-cut DSAEK donor graft to the host cornea. • A 10 -0 nylon was placed in the operative wound. Lastly, four venting incisions were placed in the peripheral cornea to release any fluid in the graft-host interface to facilitate graft adherence. • The patients were then instructed to lay supine for two hours immediately post-operatively, after which they were examined at the slit-lamp biomicrscope to ensure graft attachment and check intraocular pressure.

Conclusions • Post-operative acuity after DSAEK in the literature varies, most achieving acuity of 20/40 to 20/60 at postoperative month 3 • Our study had comparable visual acuity outcomes not only at 3 -6 months post-operatively, but also at 1 -2 years, suggesting that lens exchange may not always be necessary to achieve successful DSAEK surgery. • Careful preoperative evaluation, including assessment of anterior chamber depth, vitreous prolapse into the anterior chamber, and documentation of peripheral anterior synechiae is recommended.

Conclusions • DSAEK surgery in patients with ACIOL remains a controversial topic • The visual and anatomical outcomes from this limited study support this approach as a surgical option in selected cases. • Further prospective studies with endothelial cell loss analysis are warranted to provide more information on this approach.