Durable Development of Cultural Tourism in Timisoara and 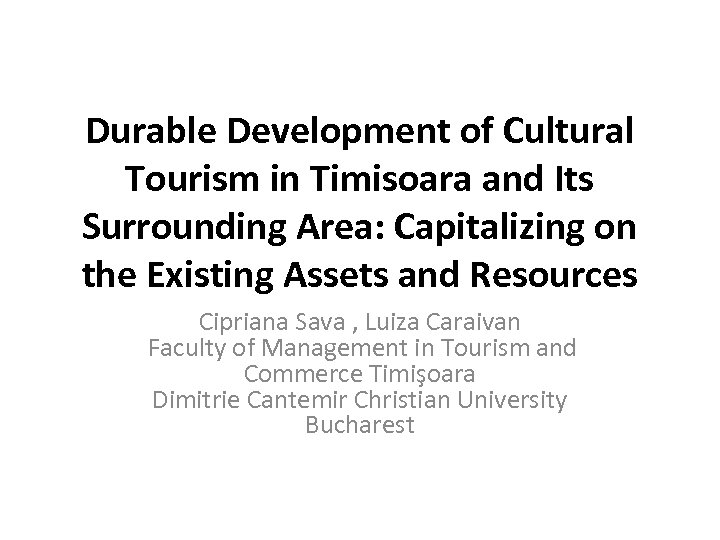 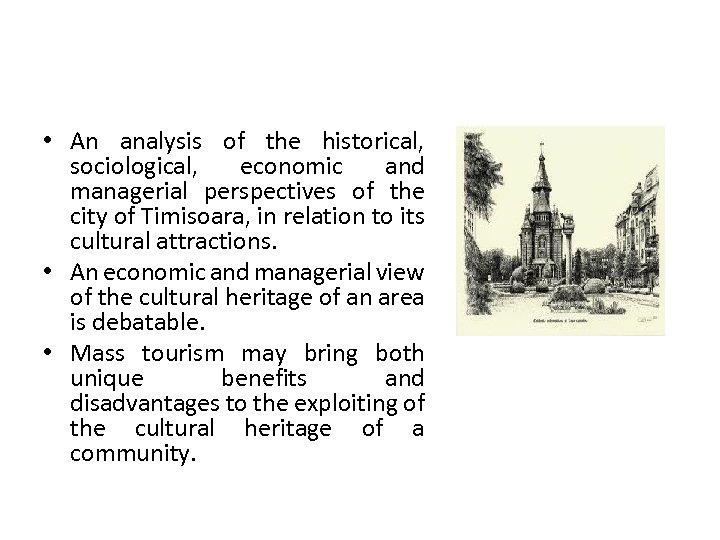 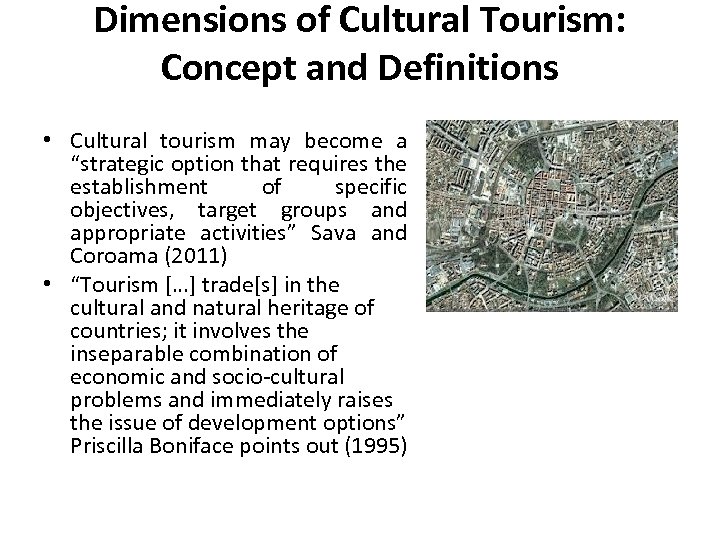 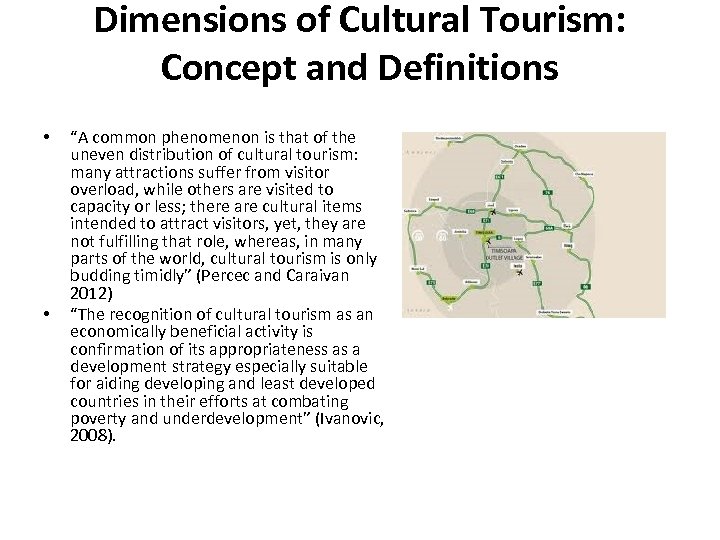 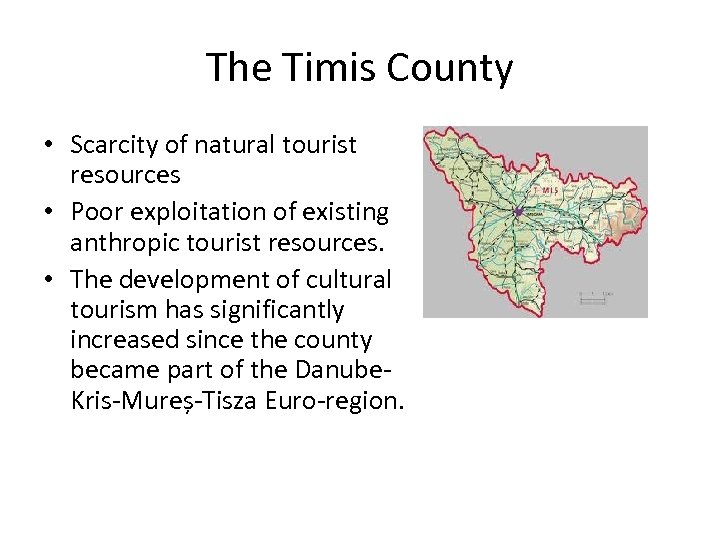 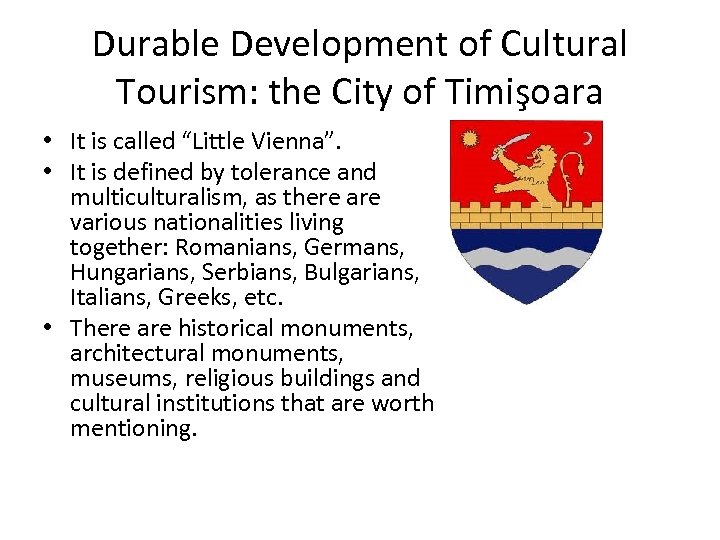 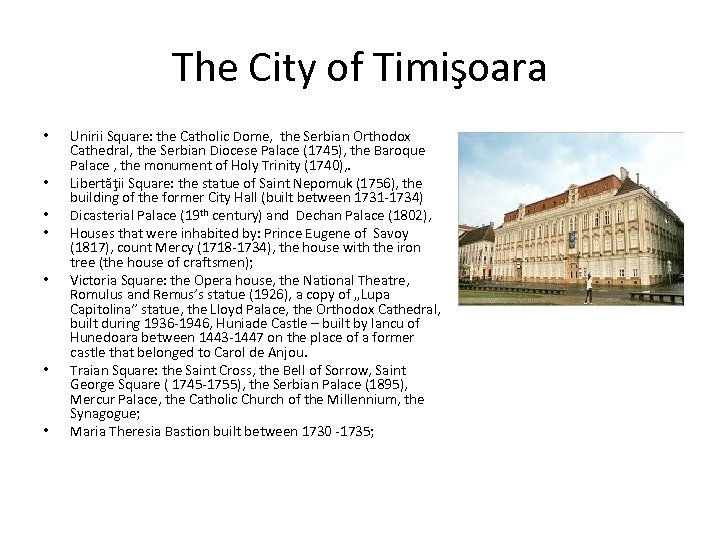 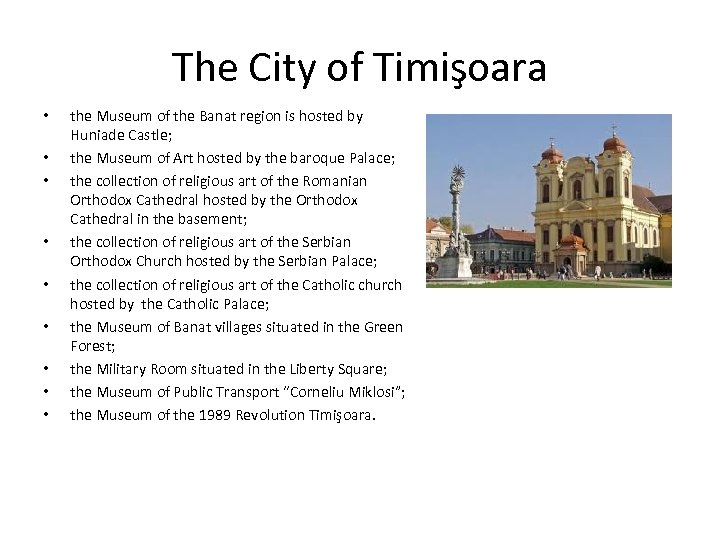 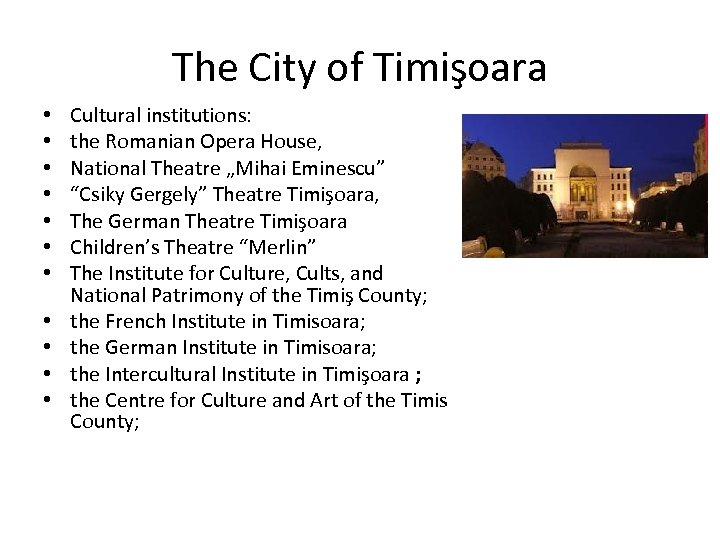 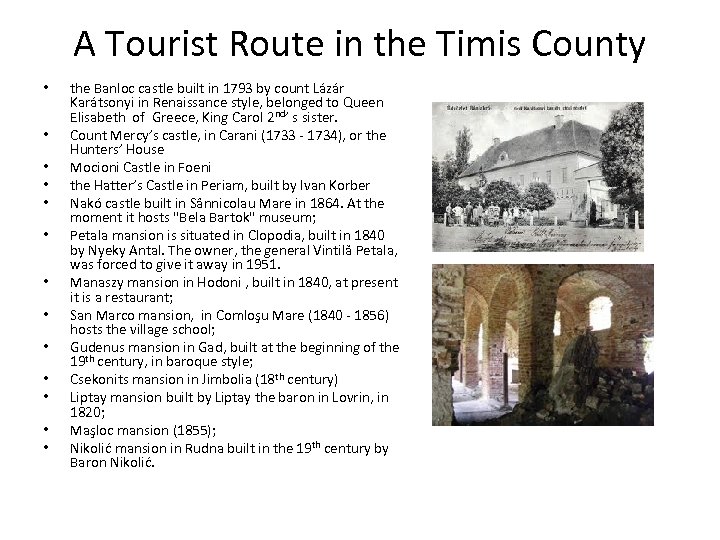 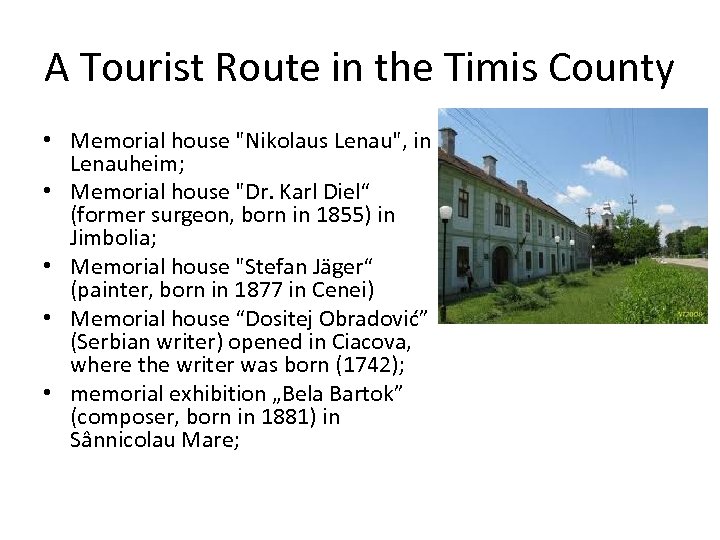 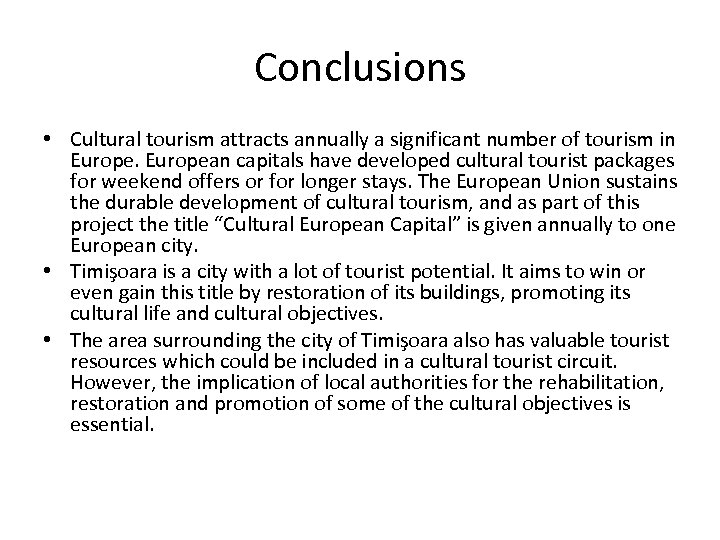 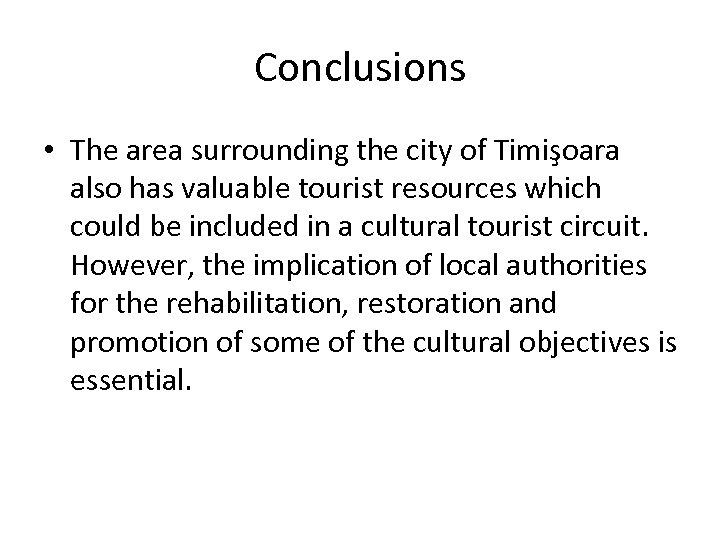 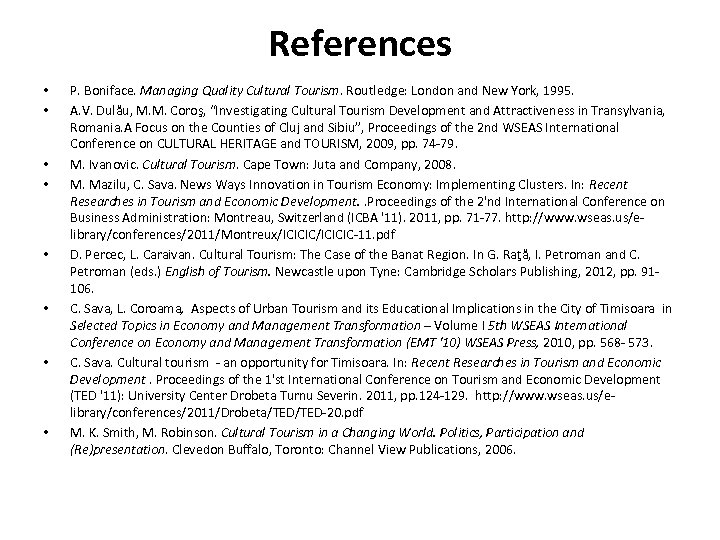 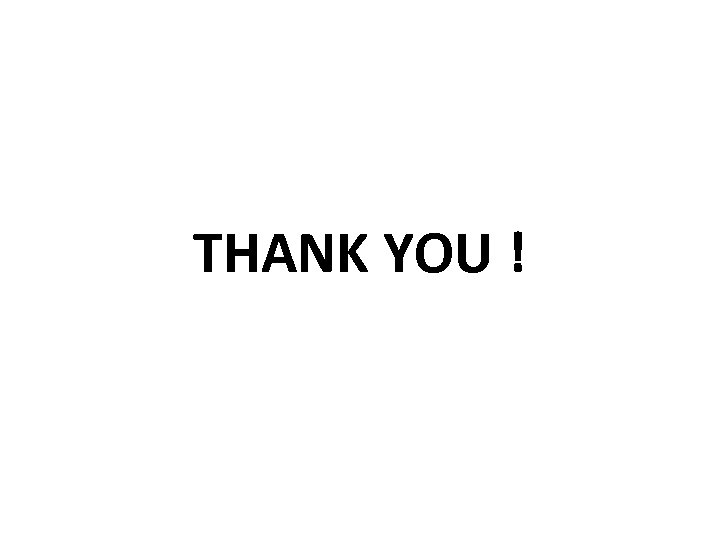 Скачать презентацию Durable Development of Cultural Tourism in Timisoara and

Dimensions of Cultural Tourism: Concept and Definitions • Cultural tourism may become a “strategic option that requires the establishment of specific objectives, target groups and appropriate activities” Sava and Coroama (2011) • “Tourism […] trade[s] in the cultural and natural heritage of countries; it involves the inseparable combination of economic and socio-cultural problems and immediately raises the issue of development options” Priscilla Boniface points out (1995)

Dimensions of Cultural Tourism: Concept and Definitions • • “A common phenomenon is that of the uneven distribution of cultural tourism: many attractions suffer from visitor overload, while others are visited to capacity or less; there are cultural items intended to attract visitors, yet, they are not fulfilling that role, whereas, in many parts of the world, cultural tourism is only budding timidly” (Percec and Caraivan 2012) “The recognition of cultural tourism as an economically beneficial activity is confirmation of its appropriateness as a development strategy especially suitable for aiding developing and least developed countries in their efforts at combating poverty and underdevelopment” (Ivanovic, 2008).

The Timis County • Scarcity of natural tourist resources • Poor exploitation of existing anthropic tourist resources. • The development of cultural tourism has significantly increased since the county became part of the Danube. Kris-Mureș-Tisza Euro-region.

Durable Development of Cultural Tourism: the City of Timişoara • It is called “Little Vienna”. • It is defined by tolerance and multiculturalism, as there are various nationalities living together: Romanians, Germans, Hungarians, Serbians, Bulgarians, Italians, Greeks, etc. • There are historical monuments, architectural monuments, museums, religious buildings and cultural institutions that are worth mentioning.

The City of Timişoara • • Unirii Square: the Catholic Dome, the Serbian Orthodox Cathedral, the Serbian Diocese Palace (1745), the Baroque Palace , the monument of Holy Trinity (1740), . Libertăţii Square: the statue of Saint Nepomuk (1756), the building of the former City Hall (built between 1731 -1734) Dicasterial Palace (19 th century) and Dechan Palace (1802), Houses that were inhabited by: Prince Eugene of Savoy (1817), count Mercy (1718 -1734), the house with the iron tree (the house of craftsmen); Victoria Square: the Opera house, the National Theatre, Romulus and Remus’s statue (1926), a copy of „Lupa Capitolina” statue, the Lloyd Palace, the Orthodox Cathedral, built during 1936 -1946, Huniade Castle – built by Iancu of Hunedoara between 1443 -1447 on the place of a former castle that belonged to Carol de Anjou. Traian Square: the Saint Cross, the Bell of Sorrow, Saint George Square ( 1745 -1755), the Serbian Palace (1895), Mercur Palace, the Catholic Church of the Millennium, the Synagogue; Maria Theresia Bastion built between 1730 -1735;

A Tourist Route in the Timis County • • • • the Banloc castle built in 1793 by count Lázár Karátsonyi in Renaissance style, belonged to Queen Elisabeth of Greece, King Carol 2 nd’ s sister. Count Mercy’s castle, in Carani (1733 - 1734), or the Hunters’ House Mocioni Castle in Foeni the Hatter’s Castle in Periam, built by Ivan Korber Nakó castle built in Sânnicolau Mare in 1864. At the moment it hosts "Bela Bartok" museum; Petala mansion is situated in Clopodia, built in 1840 by Nyeky Antal. The owner, the general Vintilǎ Petala, was forced to give it away in 1951. Manaszy mansion in Hodoni , built in 1840, at present it is a restaurant; San Marco mansion, in Comloşu Mare (1840 - 1856) hosts the village school; Gudenus mansion in Gad, built at the beginning of the 19 th century, in baroque style; Csekonits mansion in Jimbolia (18 th century) Liptay mansion built by Liptay the baron in Lovrin, in 1820; Maşloc mansion (1855); Nikolić mansion in Rudna built in the 19 th century by Baron Nikolić.

Conclusions • Cultural tourism attracts annually a significant number of tourism in European capitals have developed cultural tourist packages for weekend offers or for longer stays. The European Union sustains the durable development of cultural tourism, and as part of this project the title “Cultural European Capital” is given annually to one European city. • Timişoara is a city with a lot of tourist potential. It aims to win or even gain this title by restoration of its buildings, promoting its cultural life and cultural objectives. • The area surrounding the city of Timişoara also has valuable tourist resources which could be included in a cultural tourist circuit. However, the implication of local authorities for the rehabilitation, restoration and promotion of some of the cultural objectives is essential.

Conclusions • The area surrounding the city of Timişoara also has valuable tourist resources which could be included in a cultural tourist circuit. However, the implication of local authorities for the rehabilitation, restoration and promotion of some of the cultural objectives is essential.