Drones a market survey In the modeling market 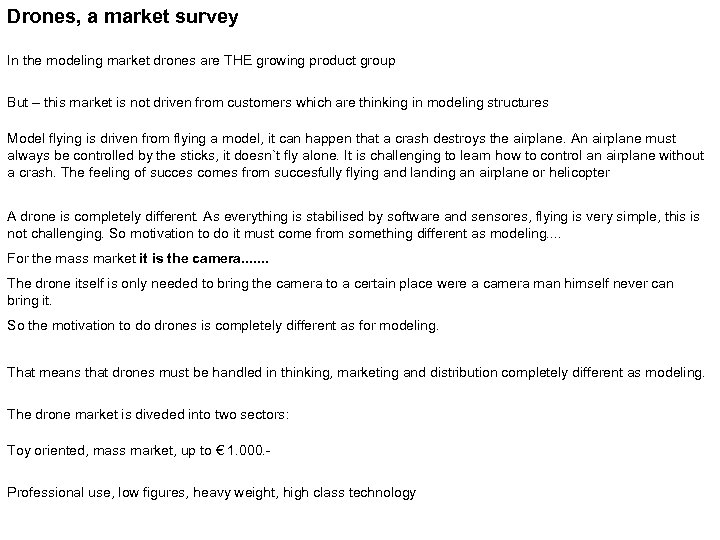 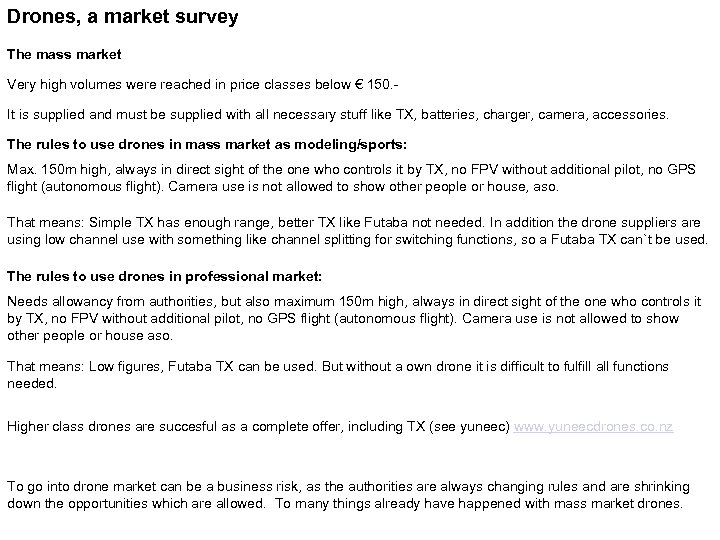 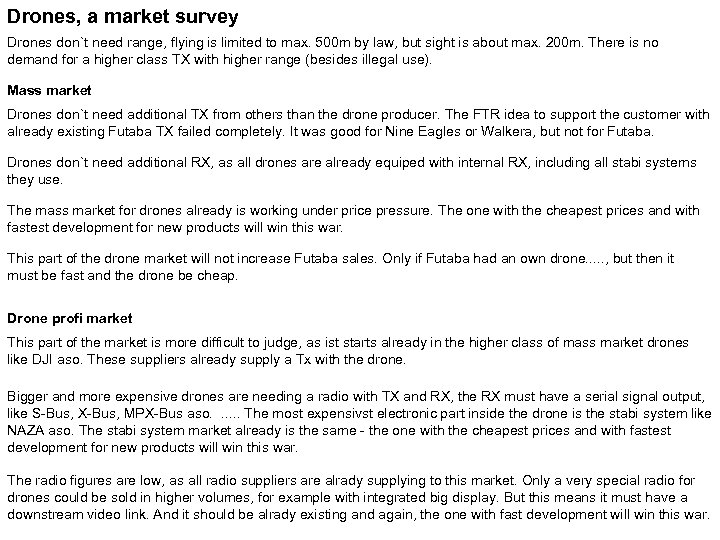 Скачать презентацию Drones a market survey In the modeling market

Drones, a market survey In the modeling market drones are THE growing product group But – this market is not driven from customers which are thinking in modeling structures Model flying is driven from flying a model, it can happen that a crash destroys the airplane. An airplane must always be controlled by the sticks, it doesn`t fly alone. It is challenging to learn how to control an airplane without a crash. The feeling of succes comes from succesfully flying and landing an airplane or helicopter A drone is completely different. As everything is stabilised by software and sensores, flying is very simple, this is not challenging. So motivation to do it must come from something different as modeling. . For the mass market it is the camera. . . . The drone itself is only needed to bring the camera to a certain place were a camera man himself never can bring it. So the motivation to do drones is completely different as for modeling. That means that drones must be handled in thinking, marketing and distribution completely different as modeling. The drone market is diveded into two sectors: Toy oriented, mass market, up to € 1. 000. Professional use, low figures, heavy weight, high class technology

Drones, a market survey Drones don`t need range, flying is limited to max. 500 m by law, but sight is about max. 200 m. There is no demand for a higher class TX with higher range (besides illegal use). Mass market Drones don`t need additional TX from others than the drone producer. The FTR idea to support the customer with already existing Futaba TX failed completely. It was good for Nine Eagles or Walkera, but not for Futaba. Drones don`t need additional RX, as all drones are already equiped with internal RX, including all stabi systems they use. The mass market for drones already is working under price pressure. The one with the cheapest prices and with fastest development for new products will win this war. This part of the drone market will not increase Futaba sales. Only if Futaba had an own drone. . . , but then it must be fast and the drone be cheap. Drone profi market This part of the market is more difficult to judge, as ist starts already in the higher class of mass market drones like DJI aso. These suppliers already supply a Tx with the drone. Bigger and more expensive drones are needing a radio with TX and RX, the RX must have a serial signal output, like S-Bus, X-Bus, MPX-Bus aso. . . The most expensivst electronic part inside the drone is the stabi system like NAZA aso. The stabi system market already is the same - the one with the cheapest prices and with fastest development for new products will win this war. The radio figures are low, as all radio suppliers are alrady supplying to this market. Only a very special radio for drones could be sold in higher volumes, for example with integrated big display. But this means it must have a downstream video link. And it should be alrady existing and again, the one with fast development will win this war.