DPG What is Realism in Physics What is 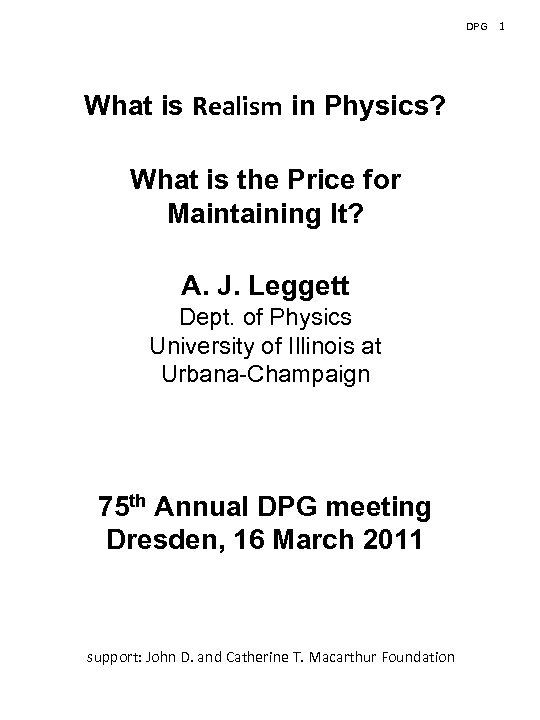 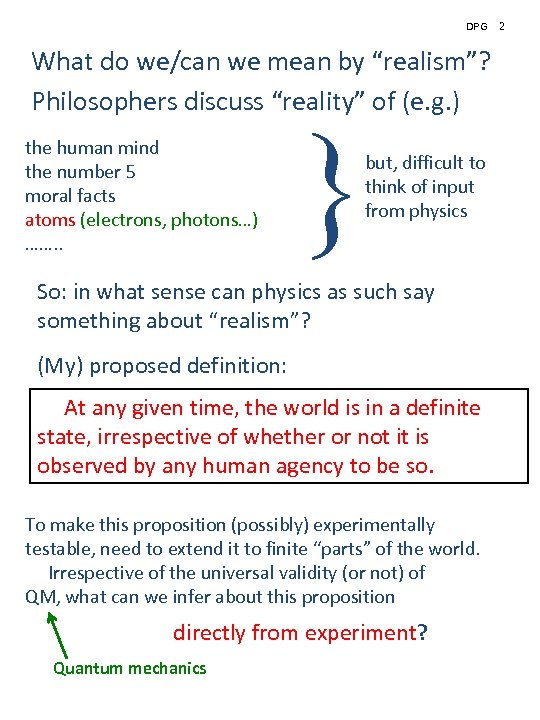 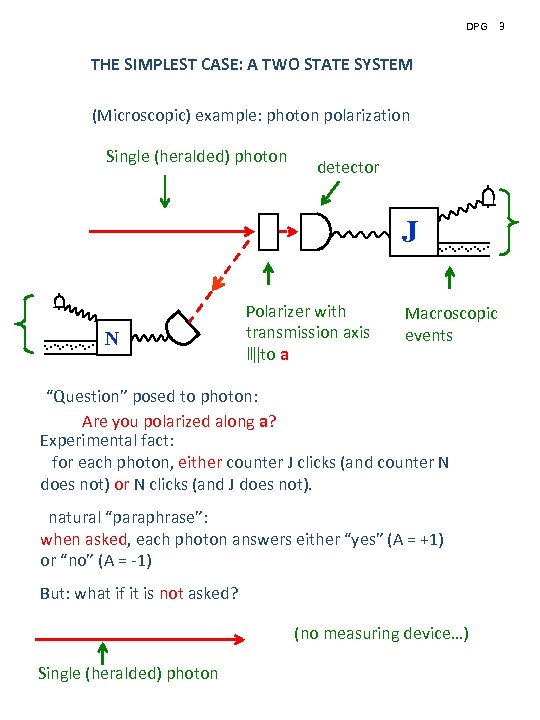 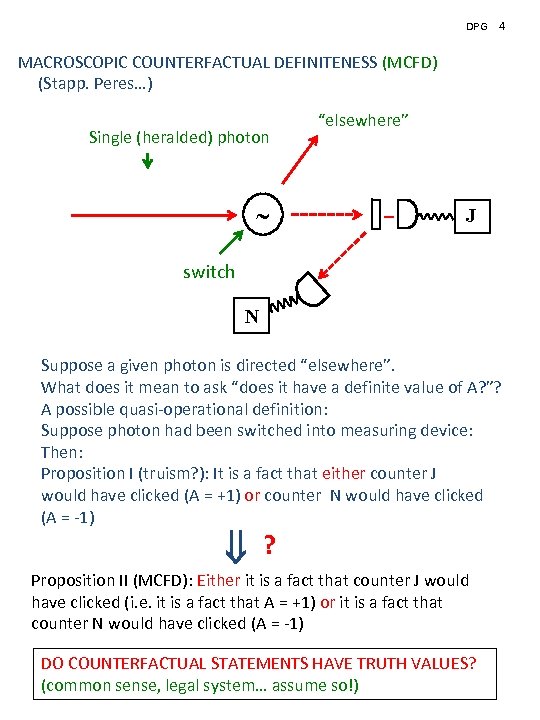 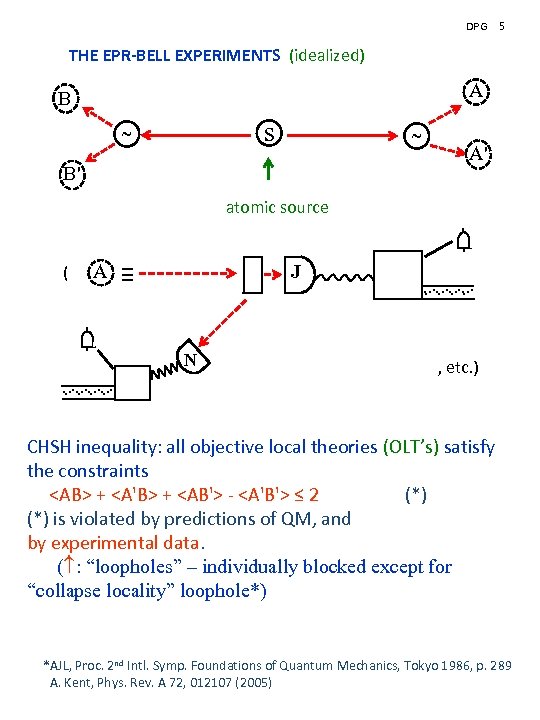 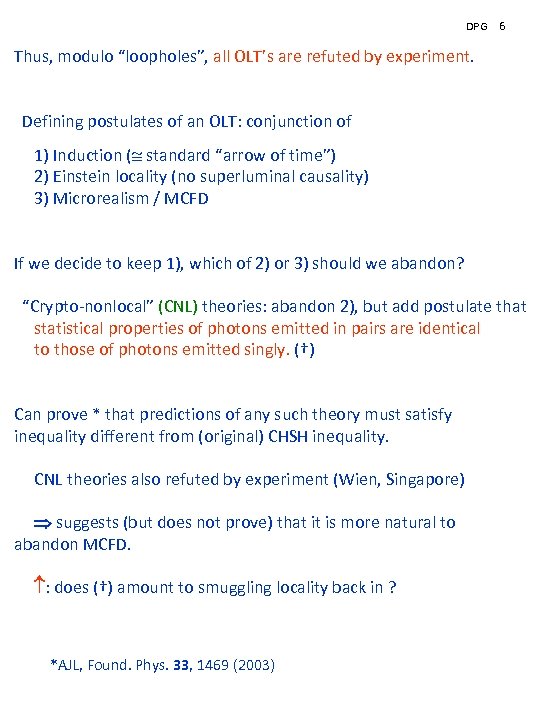 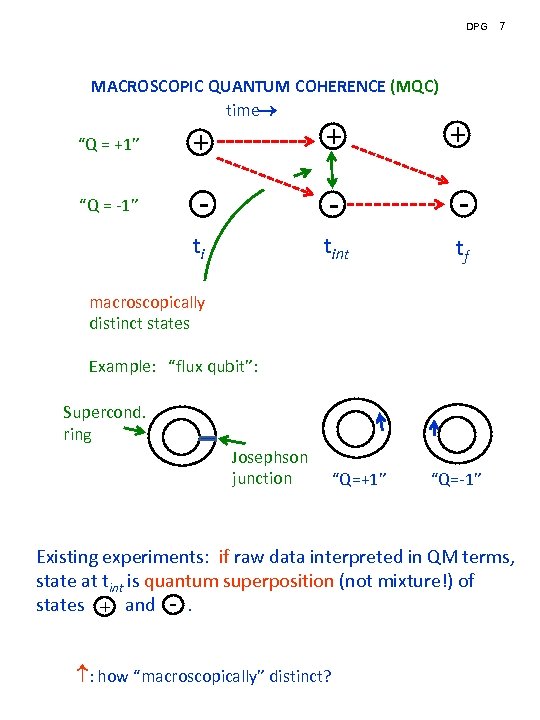 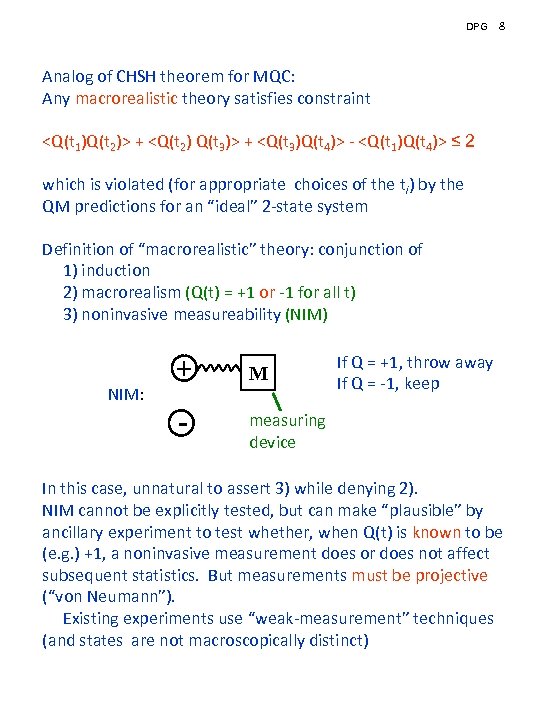 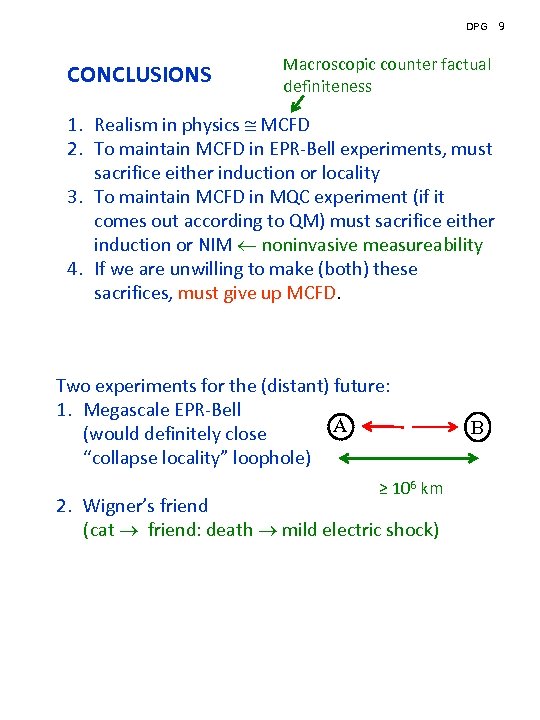 Скачать презентацию DPG What is Realism in Physics What is

DPG What is Realism in Physics? What is the Price for Maintaining It? A. J. Leggett Dept. of Physics University of Illinois at Urbana-Champaign 75 th Annual DPG meeting Dresden, 16 March 2011 support: John D. and Catherine T. Macarthur Foundation 1

DPG What do we/can we mean by “realism”? Philosophers discuss “reality” of (e. g. ) the human mind the number 5 moral facts atoms (electrons, photons…) ……. . but, difficult to think of input from physics So: in what sense can physics as such say something about “realism”? (My) proposed definition: At any given time, the world is in a definite state, irrespective of whether or not it is observed by any human agency to be so. To make this proposition (possibly) experimentally testable, need to extend it to finite “parts” of the world. Irrespective of the universal validity (or not) of QM, what can we infer about this proposition directly from experiment? Quantum mechanics 2

DPG THE SIMPLEST CASE: A TWO STATE SYSTEM (Microscopic) example: photon polarization Single (heralded) photon detector J. . . . N Polarizer with transmission axis ‖‖to a . . . . Macroscopic events “Question” posed to photon: Are you polarized along a? Experimental fact: for each photon, either counter J clicks (and counter N does not) or N clicks (and J does not). natural “paraphrase”: when asked, each photon answers either “yes” (A = +1) or “no” (A = -1) But: what if it is not asked? (no measuring device…) Single (heralded) photon 3

DPG 6 Thus, modulo “loopholes”, all OLT’s are refuted by experiment. Defining postulates of an OLT: conjunction of 1) Induction ( standard “arrow of time”) 2) Einstein locality (no superluminal causality) 3) Microrealism / MCFD If we decide to keep 1), which of 2) or 3) should we abandon? “Crypto-nonlocal” (CNL) theories: abandon 2), but add postulate that statistical properties of photons emitted in pairs are identical to those of photons emitted singly. (†) Can prove * that predictions of any such theory must satisfy inequality different from (original) CHSH inequality. CNL theories also refuted by experiment (Wien, Singapore) suggests (but does not prove) that it is more natural to abandon MCFD. : does (†) amount to smuggling locality back in ? *AJL, Found. Phys. 33, 1469 (2003)

DPG CONCLUSIONS Macroscopic counter factual definiteness 1. Realism in physics MCFD 2. To maintain MCFD in EPR-Bell experiments, must sacrifice either induction or locality 3. To maintain MCFD in MQC experiment (if it comes out according to QM) must sacrifice either induction or NIM noninvasive measureability 4. If we are unwilling to make (both) these sacrifices, must give up MCFD. Two experiments for the (distant) future: 1. Megascale EPR-Bell A (would definitely close “collapse locality” loophole) ≥ 106 km 2. Wigner’s friend (cat friend: death mild electric shock) B 9