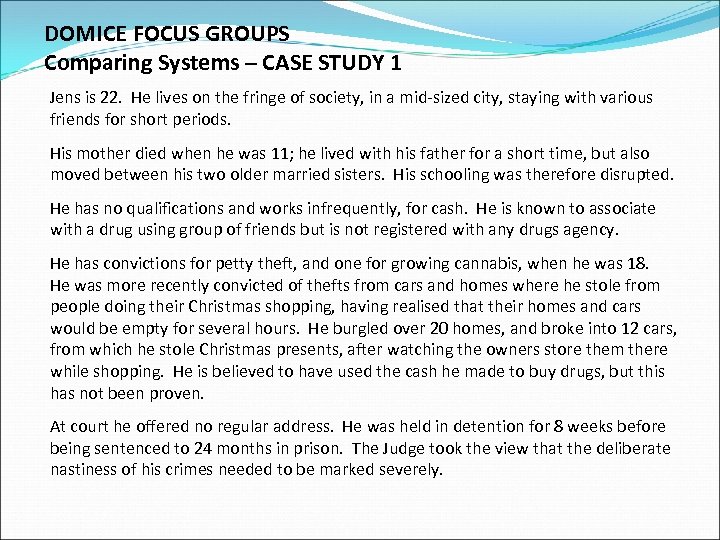 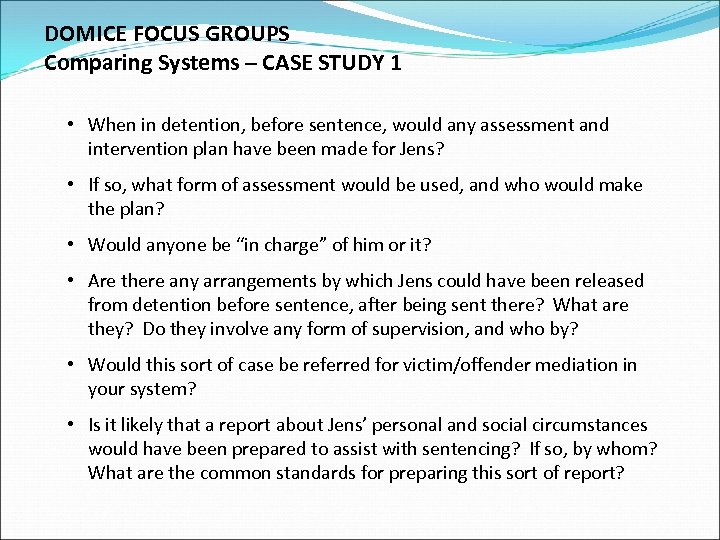 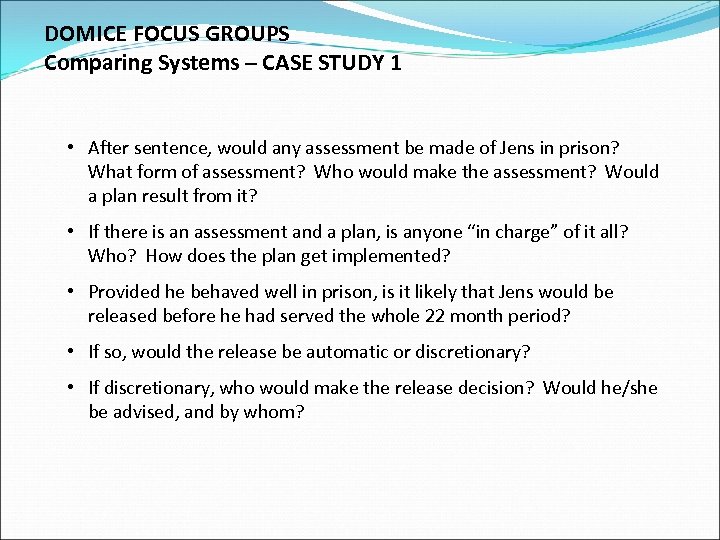 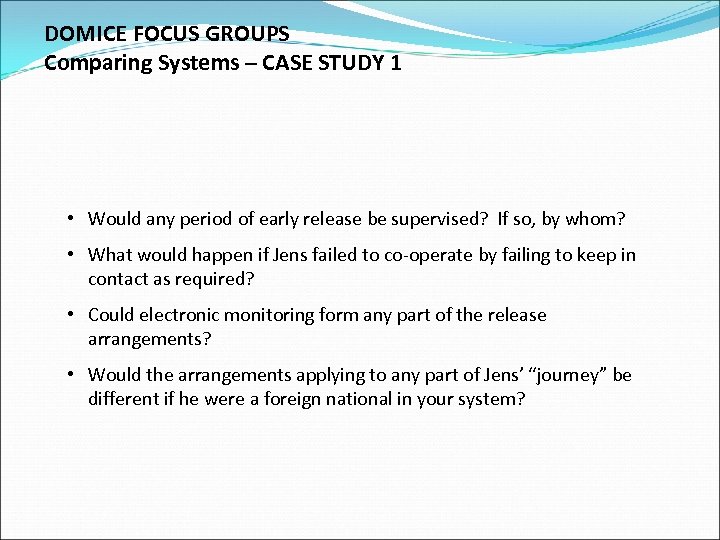 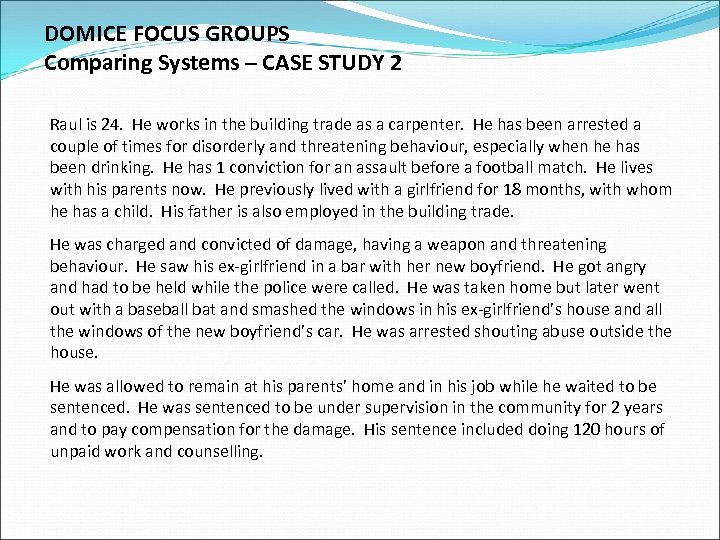 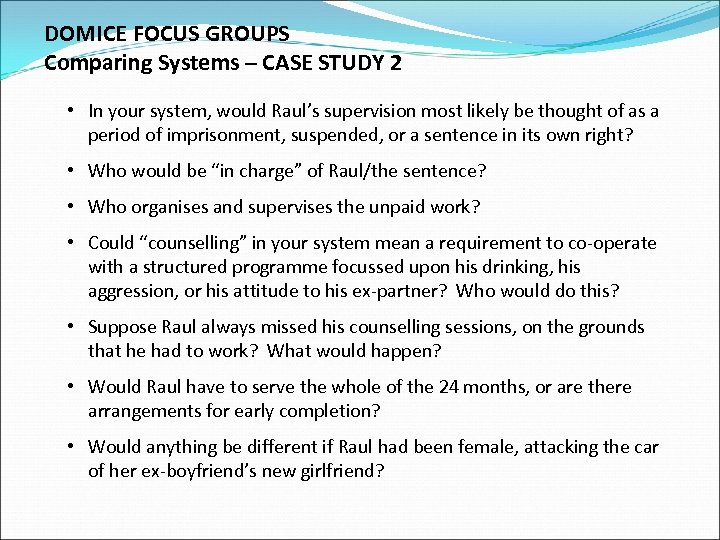 DOMICE FOCUS GROUPS Comparing Systems – CASE STUDY 1 Jens is 22. He lives on the fringe of society, in a mid-sized city, staying with various friends for short periods. His mother died when he was 11; he lived with his father for a short time, but also moved between his two older married sisters. His schooling was therefore disrupted. He has no qualifications and works infrequently, for cash. He is known to associate with a drug using group of friends but is not registered with any drugs agency. He has convictions for petty theft, and one for growing cannabis, when he was 18. He was more recently convicted of thefts from cars and homes where he stole from people doing their Christmas shopping, having realised that their homes and cars would be empty for several hours. He burgled over 20 homes, and broke into 12 cars, from which he stole Christmas presents, after watching the owners store them there while shopping. He is believed to have used the cash he made to buy drugs, but this has not been proven. At court he offered no regular address. He was held in detention for 8 weeks before being sentenced to 24 months in prison. The Judge took the view that the deliberate nastiness of his crimes needed to be marked severely.

DOMICE FOCUS GROUPS Comparing Systems – CASE STUDY 1 • When in detention, before sentence, would any assessment and intervention plan have been made for Jens? • If so, what form of assessment would be used, and who would make the plan? • Would anyone be “in charge” of him or it? • Are there any arrangements by which Jens could have been released from detention before sentence, after being sent there? What are they? Do they involve any form of supervision, and who by? • Would this sort of case be referred for victim/offender mediation in your system? • Is it likely that a report about Jens’ personal and social circumstances would have been prepared to assist with sentencing? If so, by whom? What are the common standards for preparing this sort of report?

DOMICE FOCUS GROUPS Comparing Systems – CASE STUDY 1 • After sentence, would any assessment be made of Jens in prison? What form of assessment? Who would make the assessment? Would a plan result from it? • If there is an assessment and a plan, is anyone “in charge” of it all? Who? How does the plan get implemented? • Provided he behaved well in prison, is it likely that Jens would be released before he had served the whole 22 month period? • If so, would the release be automatic or discretionary? • If discretionary, who would make the release decision? Would he/she be advised, and by whom?

DOMICE FOCUS GROUPS Comparing Systems – CASE STUDY 1 • Would any period of early release be supervised? If so, by whom? • What would happen if Jens failed to co-operate by failing to keep in contact as required? • Could electronic monitoring form any part of the release arrangements? • Would the arrangements applying to any part of Jens’ “journey” be different if he were a foreign national in your system?

DOMICE FOCUS GROUPS Comparing Systems – CASE STUDY 2 Raul is 24. He works in the building trade as a carpenter. He has been arrested a couple of times for disorderly and threatening behaviour, especially when he has been drinking. He has 1 conviction for an assault before a football match. He lives with his parents now. He previously lived with a girlfriend for 18 months, with whom he has a child. His father is also employed in the building trade. He was charged and convicted of damage, having a weapon and threatening behaviour. He saw his ex-girlfriend in a bar with her new boyfriend. He got angry and had to be held while the police were called. He was taken home but later went out with a baseball bat and smashed the windows in his ex-girlfriend’s house and all the windows of the new boyfriend’s car. He was arrested shouting abuse outside the house. He was allowed to remain at his parents’ home and in his job while he waited to be sentenced. He was sentenced to be under supervision in the community for 2 years and to pay compensation for the damage. His sentence included doing 120 hours of unpaid work and counselling.

DOMICE FOCUS GROUPS Comparing Systems – CASE STUDY 2 • In your system, would Raul’s supervision most likely be thought of as a period of imprisonment, suspended, or a sentence in its own right? • Who would be “in charge” of Raul/the sentence? • Who organises and supervises the unpaid work? • Could “counselling” in your system mean a requirement to co-operate with a structured programme focussed upon his drinking, his aggression, or his attitude to his ex-partner? Who would do this? • Suppose Raul always missed his counselling sessions, on the grounds that he had to work? What would happen? • Would Raul have to serve the whole of the 24 months, or are there arrangements for early completion? • Would anything be different if Raul had been female, attacking the car of her ex-boyfriend’s new girlfriend?