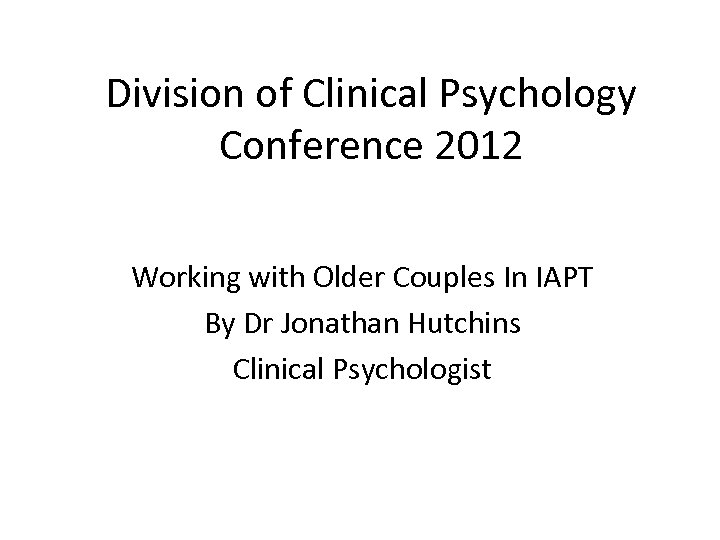 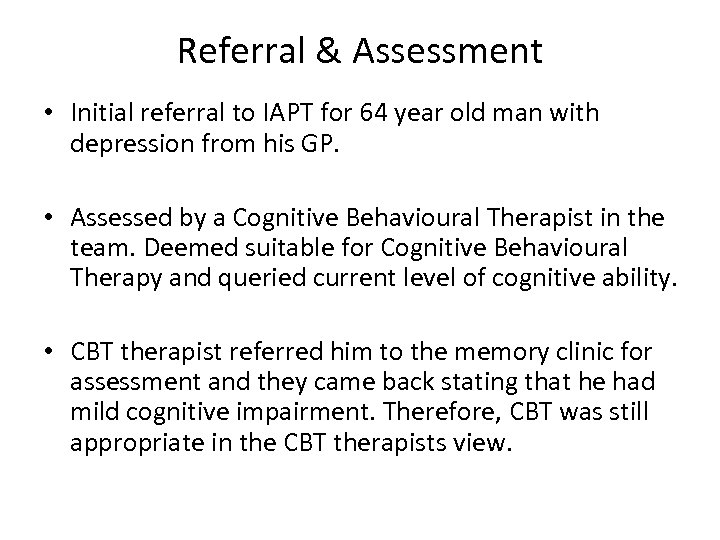 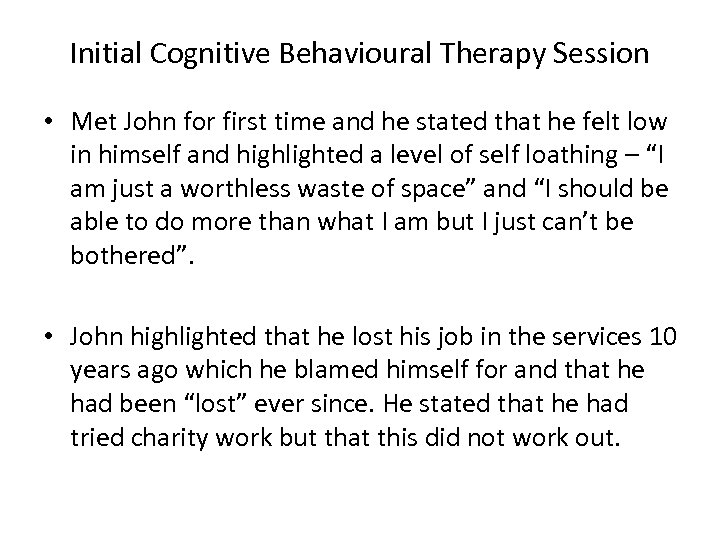 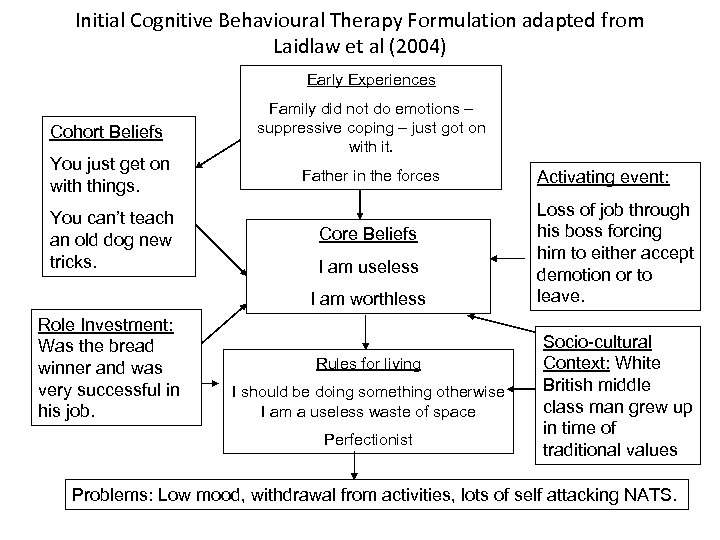 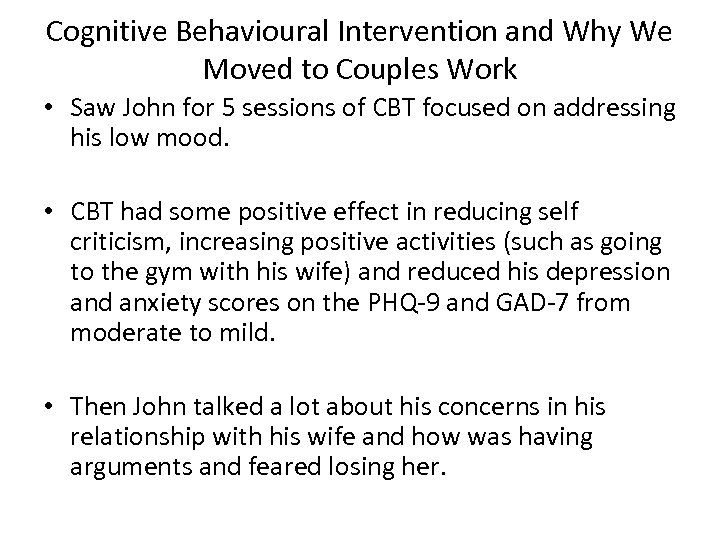 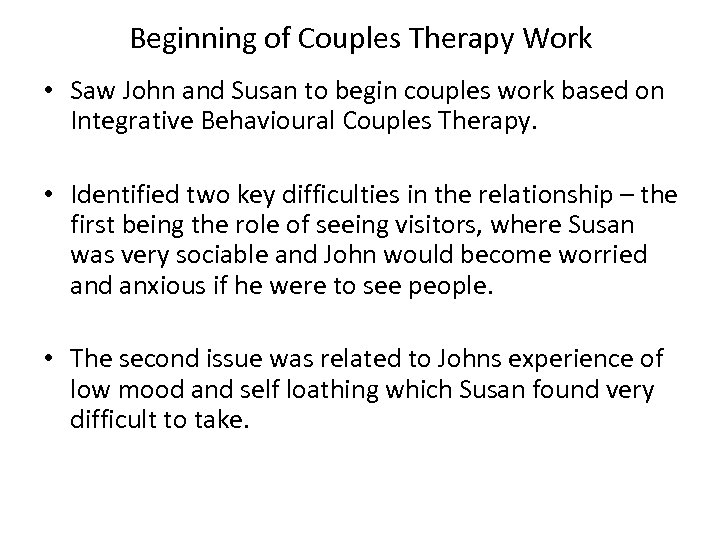 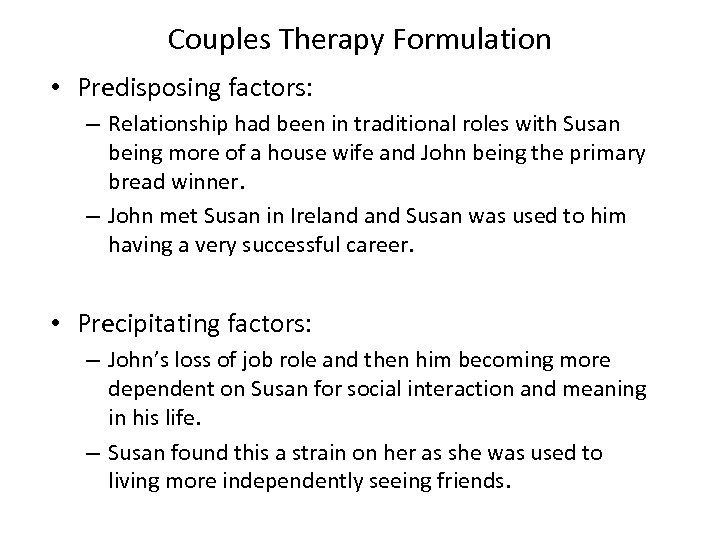 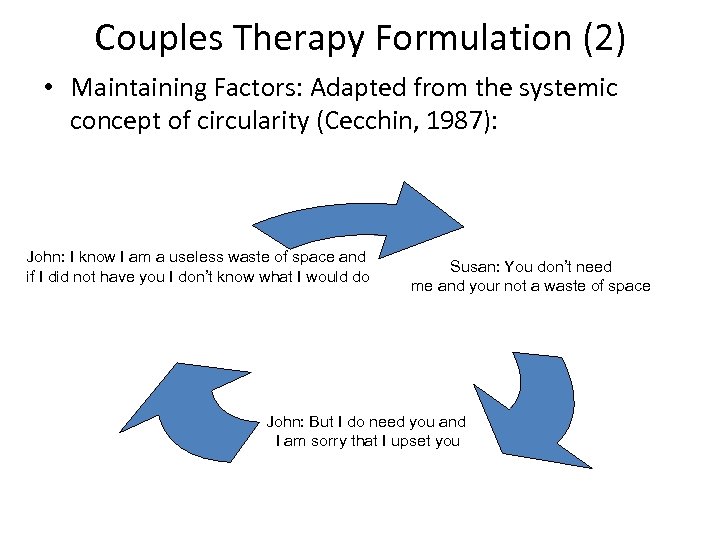 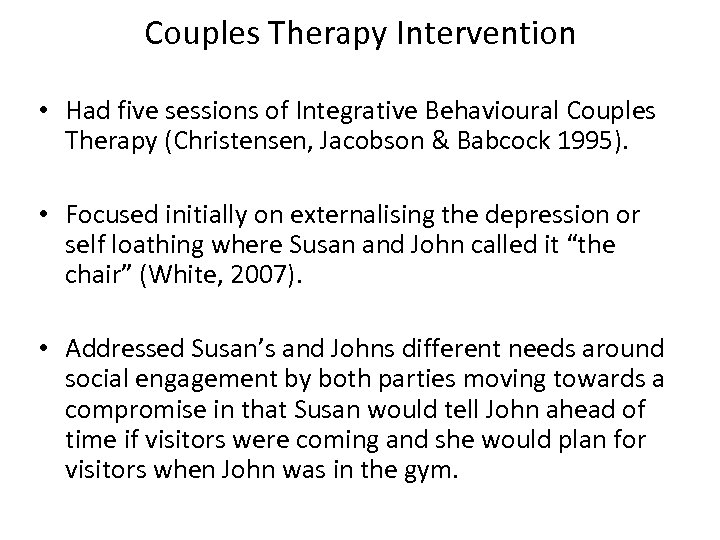 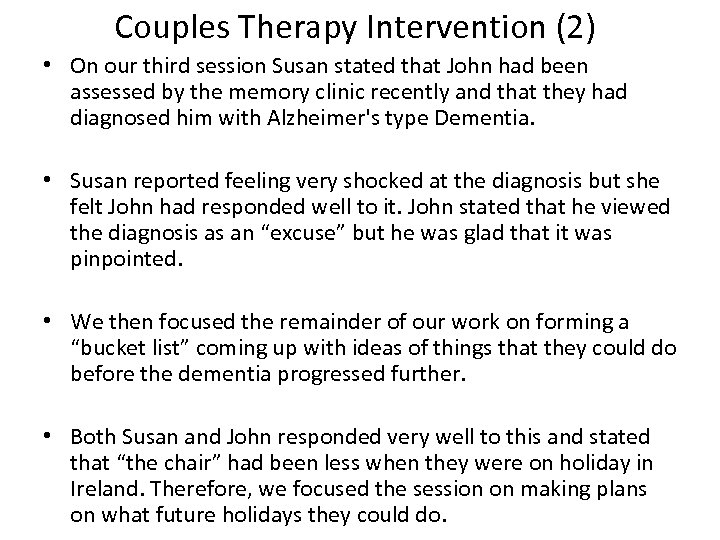 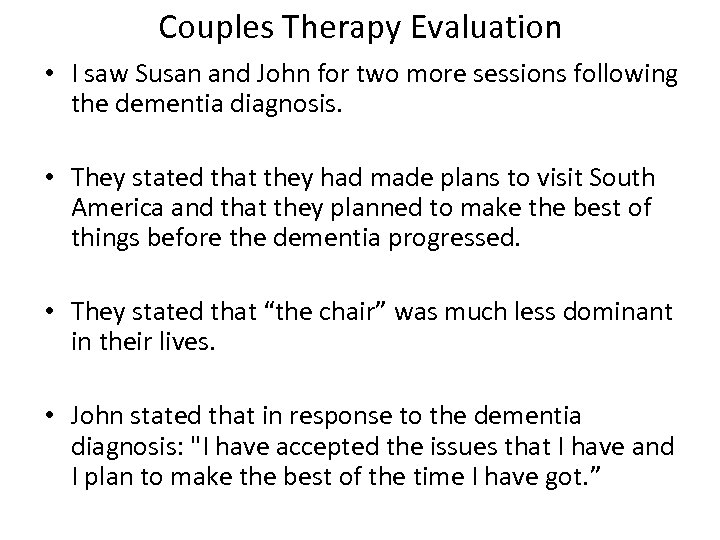 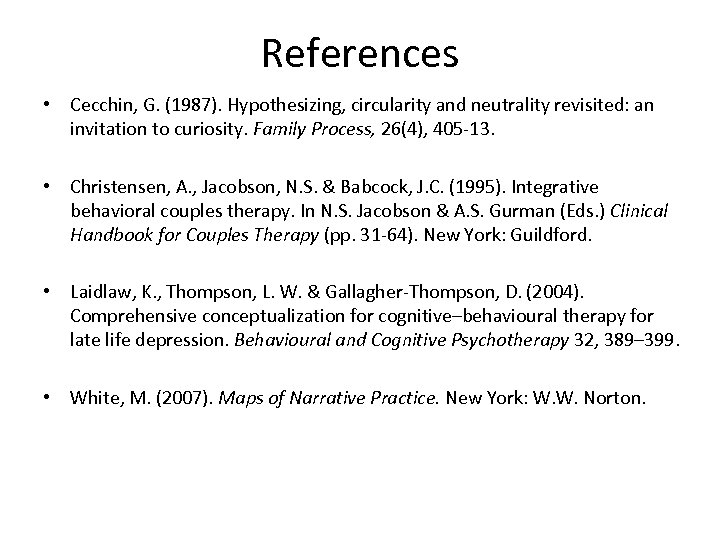 Referral & Assessment • Initial referral to IAPT for 64 year old man with depression from his GP. • Assessed by a Cognitive Behavioural Therapist in the team. Deemed suitable for Cognitive Behavioural Therapy and queried current level of cognitive ability. • CBT therapist referred him to the memory clinic for assessment and they came back stating that he had mild cognitive impairment. Therefore, CBT was still appropriate in the CBT therapists view.

Initial Cognitive Behavioural Therapy Session • Met John for first time and he stated that he felt low in himself and highlighted a level of self loathing – “I am just a worthless waste of space” and “I should be able to do more than what I am but I just can’t be bothered”. • John highlighted that he lost his job in the services 10 years ago which he blamed himself for and that he had been “lost” ever since. He stated that he had tried charity work but that this did not work out.

Initial Cognitive Behavioural Therapy Formulation adapted from Laidlaw et al (2004) Early Experiences Cohort Beliefs You just get on with things. You can’t teach an old dog new tricks. Family did not do emotions – suppressive coping – just got on with it. Father in the forces Core Beliefs I am useless I am worthless Role Investment: Was the bread winner and was very successful in his job. Rules for living I should be doing something otherwise I am a useless waste of space Perfectionist Activating event: Loss of job through his boss forcing him to either accept demotion or to leave. Socio-cultural Context: White British middle class man grew up in time of traditional values Problems: Low mood, withdrawal from activities, lots of self attacking NATS.

Cognitive Behavioural Intervention and Why We Moved to Couples Work • Saw John for 5 sessions of CBT focused on addressing his low mood. • CBT had some positive effect in reducing self criticism, increasing positive activities (such as going to the gym with his wife) and reduced his depression and anxiety scores on the PHQ-9 and GAD-7 from moderate to mild. • Then John talked a lot about his concerns in his relationship with his wife and how was having arguments and feared losing her.

Beginning of Couples Therapy Work • Saw John and Susan to begin couples work based on Integrative Behavioural Couples Therapy. • Identified two key difficulties in the relationship – the first being the role of seeing visitors, where Susan was very sociable and John would become worried anxious if he were to see people. • The second issue was related to Johns experience of low mood and self loathing which Susan found very difficult to take.

Couples Therapy Formulation • Predisposing factors: – Relationship had been in traditional roles with Susan being more of a house wife and John being the primary bread winner. – John met Susan in Ireland Susan was used to him having a very successful career. • Precipitating factors: – John’s loss of job role and then him becoming more dependent on Susan for social interaction and meaning in his life. – Susan found this a strain on her as she was used to living more independently seeing friends.

Couples Therapy Formulation (2) • Maintaining Factors: Adapted from the systemic concept of circularity (Cecchin, 1987): John: I know I am a useless waste of space and if I did not have you I don’t know what I would do Susan: You don’t need me and your not a waste of space John: But I do need you and I am sorry that I upset you

Couples Therapy Intervention • Had five sessions of Integrative Behavioural Couples Therapy (Christensen, Jacobson & Babcock 1995). • Focused initially on externalising the depression or self loathing where Susan and John called it “the chair” (White, 2007). • Addressed Susan’s and Johns different needs around social engagement by both parties moving towards a compromise in that Susan would tell John ahead of time if visitors were coming and she would plan for visitors when John was in the gym.

Couples Therapy Intervention (2) • On our third session Susan stated that John had been assessed by the memory clinic recently and that they had diagnosed him with Alzheimer's type Dementia. • Susan reported feeling very shocked at the diagnosis but she felt John had responded well to it. John stated that he viewed the diagnosis as an “excuse” but he was glad that it was pinpointed. • We then focused the remainder of our work on forming a “bucket list” coming up with ideas of things that they could do before the dementia progressed further. • Both Susan and John responded very well to this and stated that “the chair” had been less when they were on holiday in Ireland. Therefore, we focused the session on making plans on what future holidays they could do.