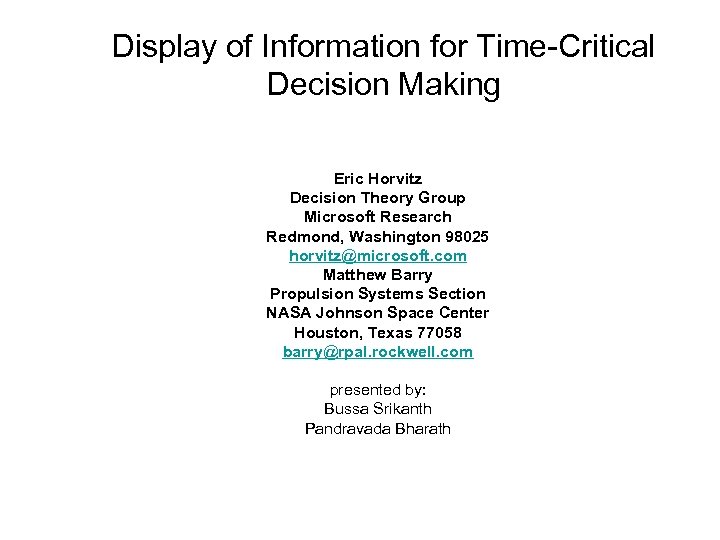 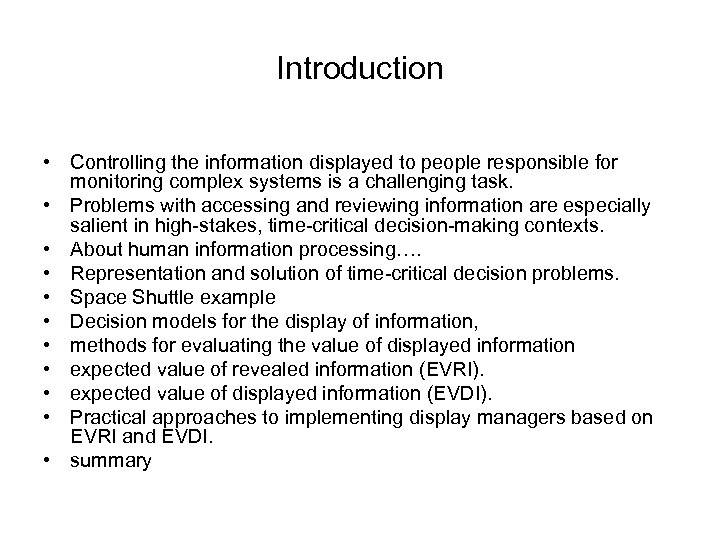 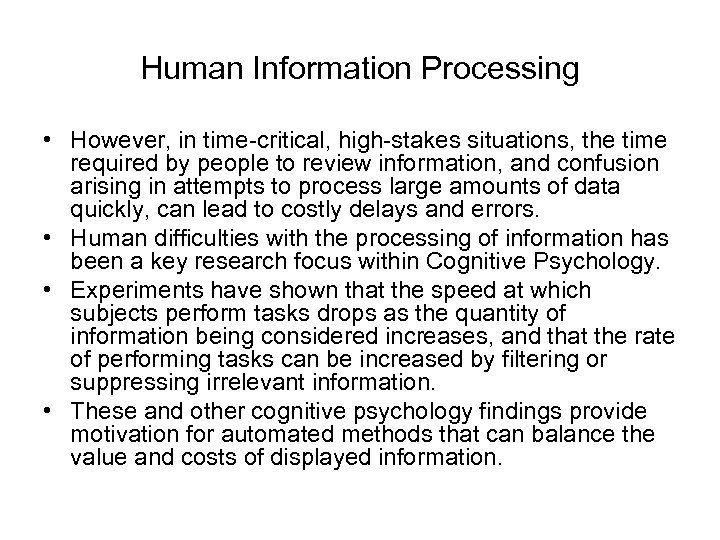 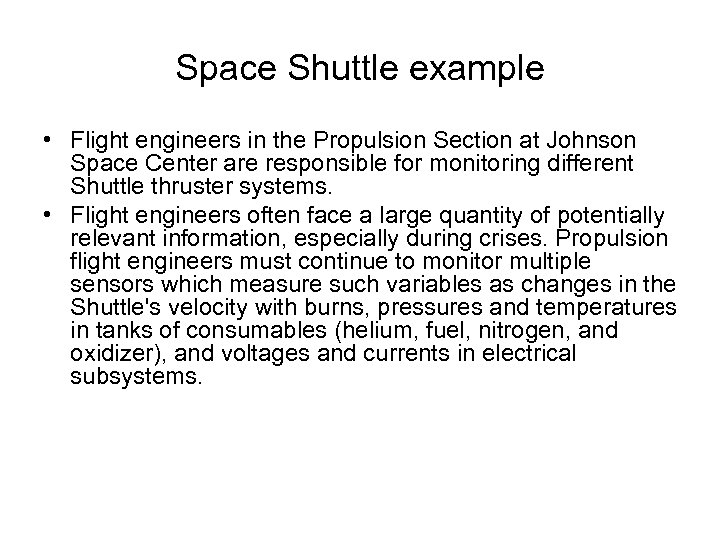 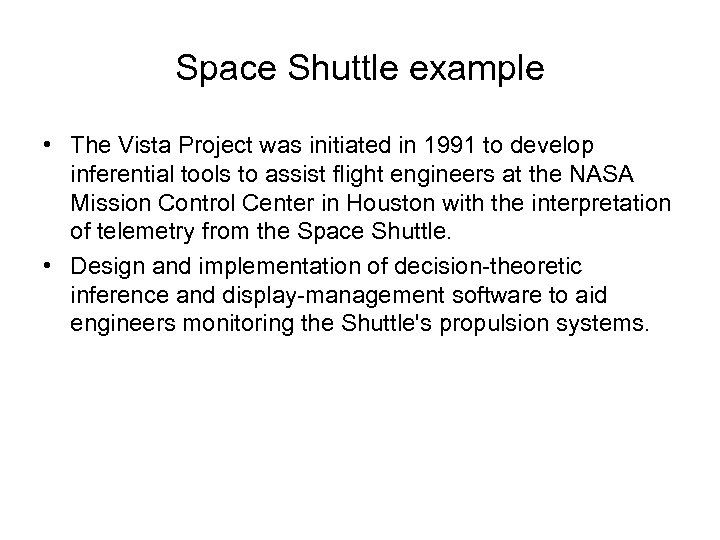 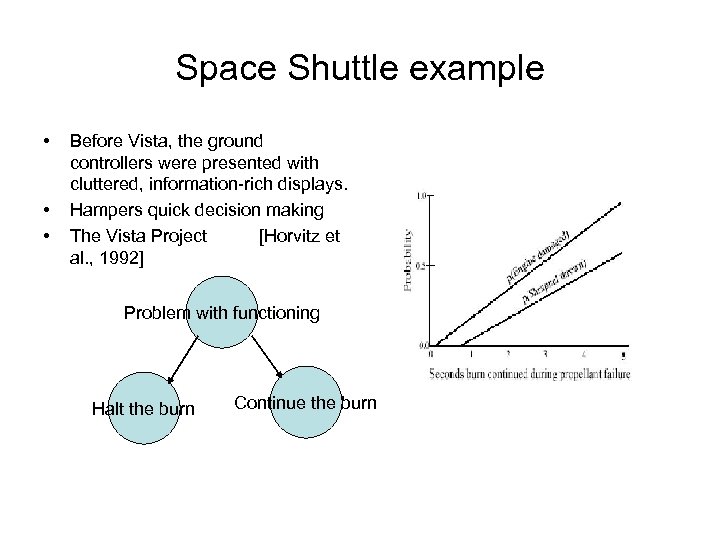 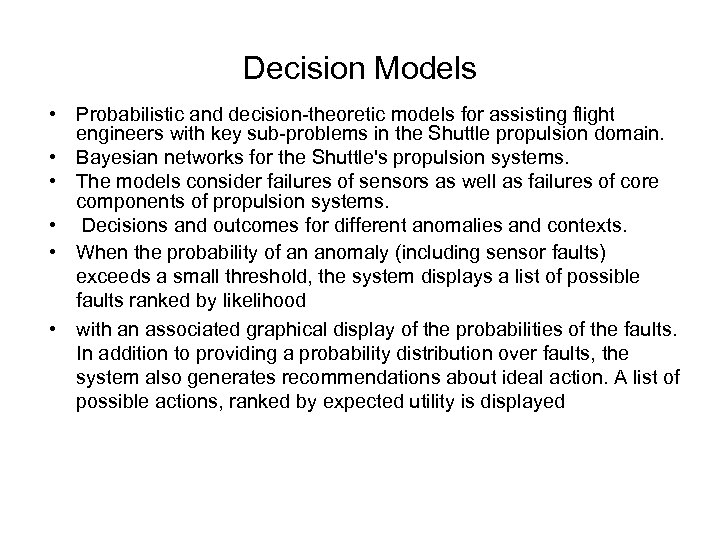 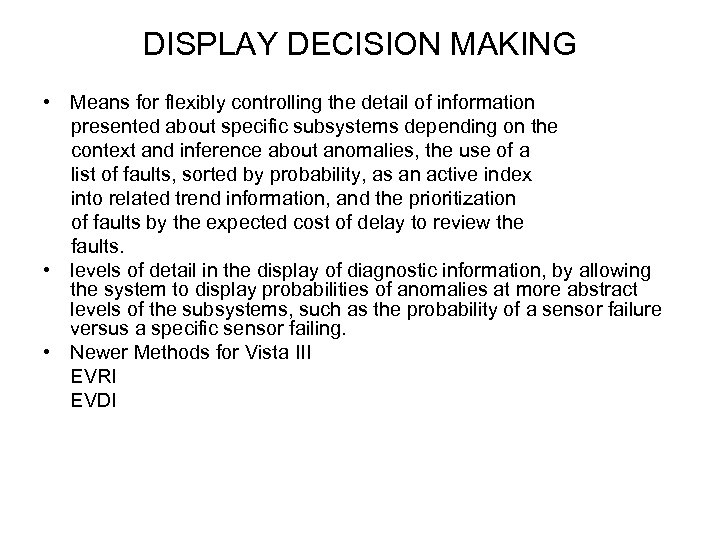 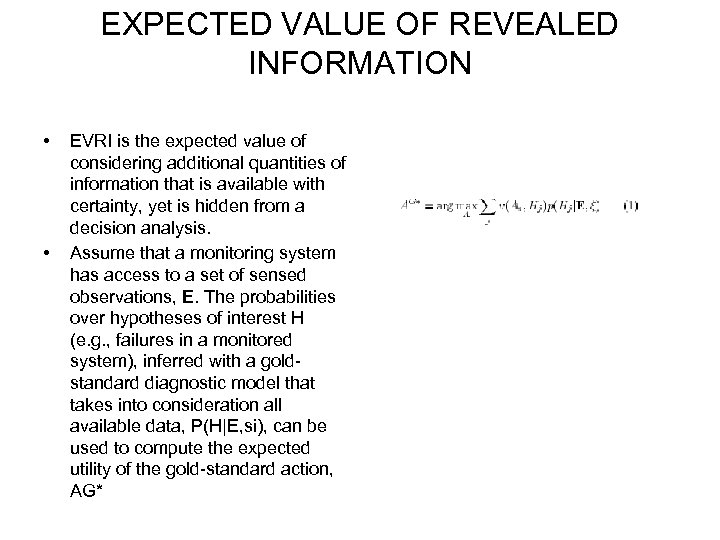 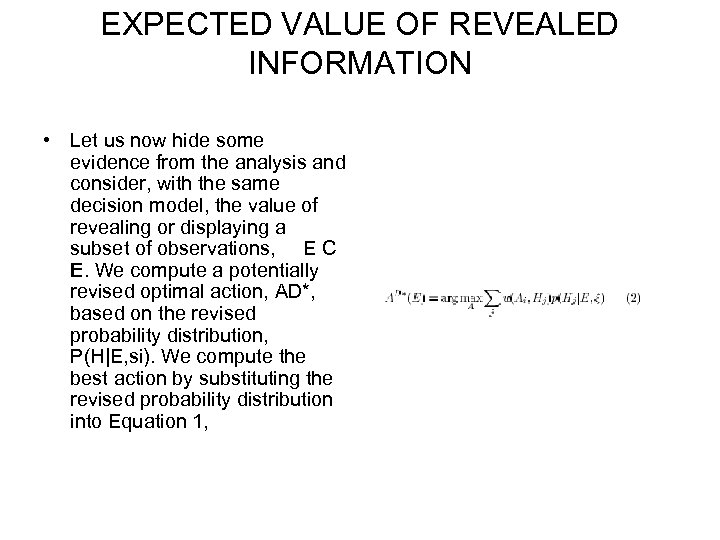 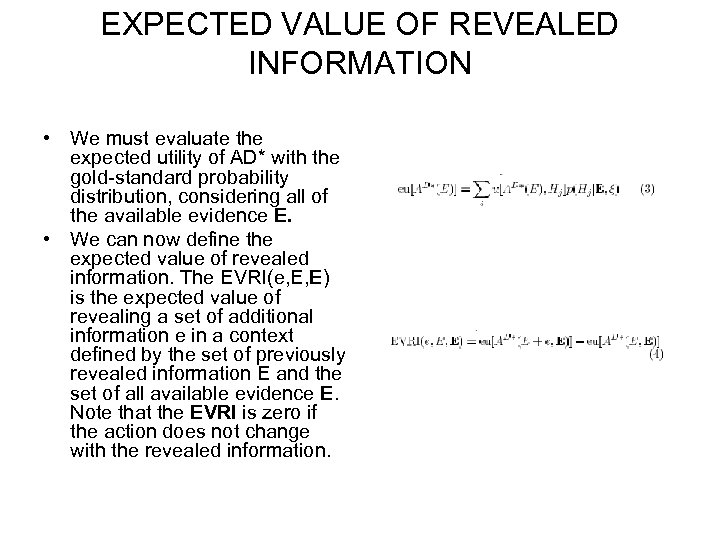 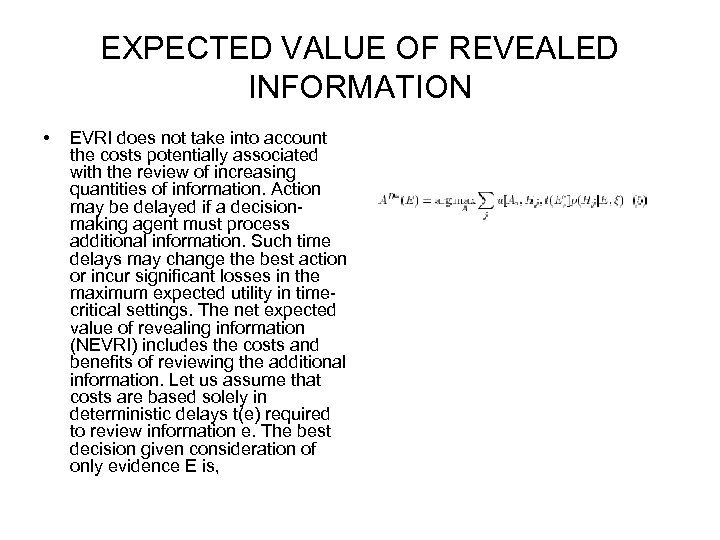 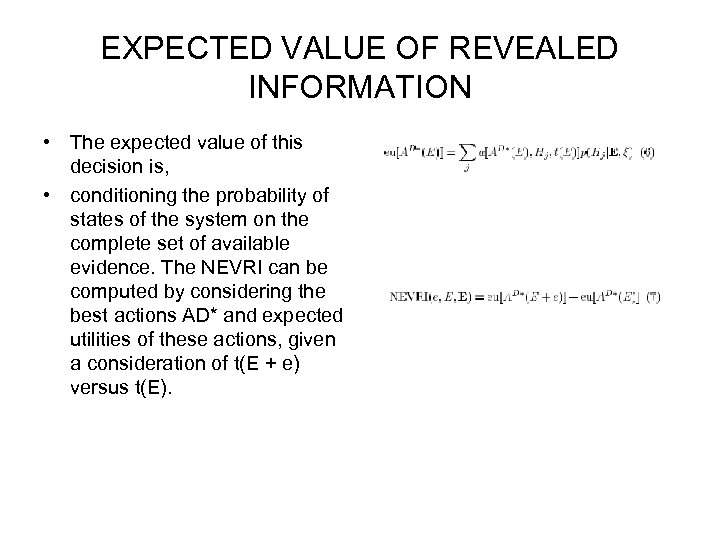 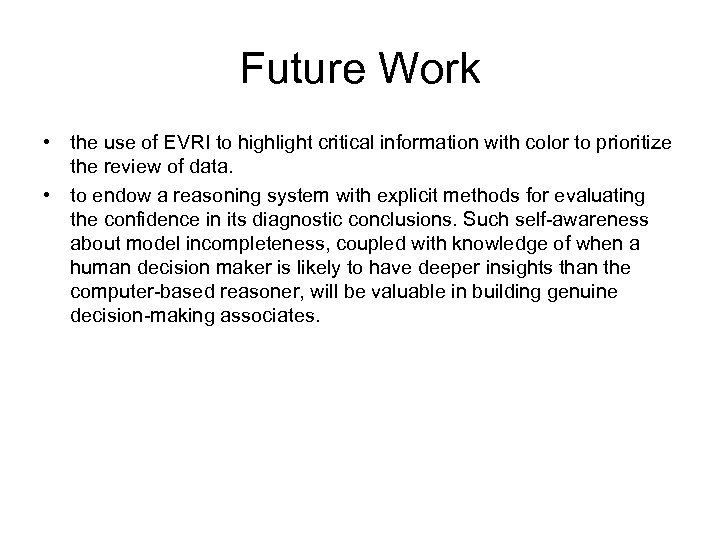 Human Information Processing • However, in time-critical, high-stakes situations, the time required by people to review information, and confusion arising in attempts to process large amounts of data quickly, can lead to costly delays and errors. • Human difficulties with the processing of information has been a key research focus within Cognitive Psychology. • Experiments have shown that the speed at which subjects perform tasks drops as the quantity of information being considered increases, and that the rate of performing tasks can be increased by filtering or suppressing irrelevant information. • These and other cognitive psychology findings provide motivation for automated methods that can balance the value and costs of displayed information.

Space Shuttle example • Flight engineers in the Propulsion Section at Johnson Space Center are responsible for monitoring different Shuttle thruster systems. • Flight engineers often face a large quantity of potentially relevant information, especially during crises. Propulsion flight engineers must continue to monitor multiple sensors which measure such variables as changes in the Shuttle's velocity with burns, pressures and temperatures in tanks of consumables (helium, fuel, nitrogen, and oxidizer), and voltages and currents in electrical subsystems.

Space Shuttle example • The Vista Project was initiated in 1991 to develop inferential tools to assist flight engineers at the NASA Mission Control Center in Houston with the interpretation of telemetry from the Space Shuttle. • Design and implementation of decision-theoretic inference and display-management software to aid engineers monitoring the Shuttle's propulsion systems.

Decision Models • Probabilistic and decision-theoretic models for assisting flight engineers with key sub-problems in the Shuttle propulsion domain. • Bayesian networks for the Shuttle's propulsion systems. • The models consider failures of sensors as well as failures of core components of propulsion systems. • Decisions and outcomes for different anomalies and contexts. • When the probability of an anomaly (including sensor faults) exceeds a small threshold, the system displays a list of possible faults ranked by likelihood • with an associated graphical display of the probabilities of the faults. In addition to providing a probability distribution over faults, the system also generates recommendations about ideal action. A list of possible actions, ranked by expected utility is displayed

DISPLAY DECISION MAKING • Means for flexibly controlling the detail of information presented about specific subsystems depending on the context and inference about anomalies, the use of a list of faults, sorted by probability, as an active index into related trend information, and the prioritization of faults by the expected cost of delay to review the faults. • levels of detail in the display of diagnostic information, by allowing the system to display probabilities of anomalies at more abstract levels of the subsystems, such as the probability of a sensor failure versus a specific sensor failing. • Newer Methods for Vista III EVRI EVDI

EXPECTED VALUE OF REVEALED INFORMATION • • EVRI is the expected value of considering additional quantities of information that is available with certainty, yet is hidden from a decision analysis. Assume that a monitoring system has access to a set of sensed observations, E. The probabilities over hypotheses of interest H (e. g. , failures in a monitored system), inferred with a goldstandard diagnostic model that takes into consideration all available data, P(H|E, si), can be used to compute the expected utility of the gold-standard action, AG*

EXPECTED VALUE OF REVEALED INFORMATION • Let us now hide some evidence from the analysis and consider, with the same decision model, the value of revealing or displaying a subset of observations, E C E. We compute a potentially revised optimal action, AD*, based on the revised probability distribution, P(H|E, si). We compute the best action by substituting the revised probability distribution into Equation 1,

EXPECTED VALUE OF REVEALED INFORMATION • EVRI does not take into account the costs potentially associated with the review of increasing quantities of information. Action may be delayed if a decisionmaking agent must process additional information. Such time delays may change the best action or incur significant losses in the maximum expected utility in timecritical settings. The net expected value of revealing information (NEVRI) includes the costs and benefits of reviewing the additional information. Let us assume that costs are based solely in deterministic delays t(e) required to review information e. The best decision given consideration of only evidence E is,

EXPECTED VALUE OF REVEALED INFORMATION • The expected value of this decision is, • conditioning the probability of states of the system on the complete set of available evidence. The NEVRI can be computed by considering the best actions AD* and expected utilities of these actions, given a consideration of t(E + e) versus t(E).

Future Work • the use of EVRI to highlight critical information with color to prioritize the review of data. • to endow a reasoning system with explicit methods for evaluating the confidence in its diagnostic conclusions. Such self-awareness about model incompleteness, coupled with knowledge of when a human decision maker is likely to have deeper insights than the computer-based reasoner, will be valuable in building genuine decision-making associates.