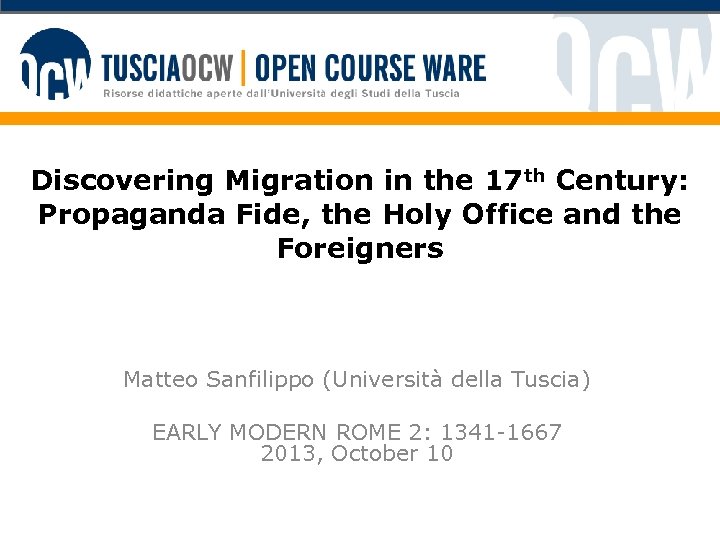 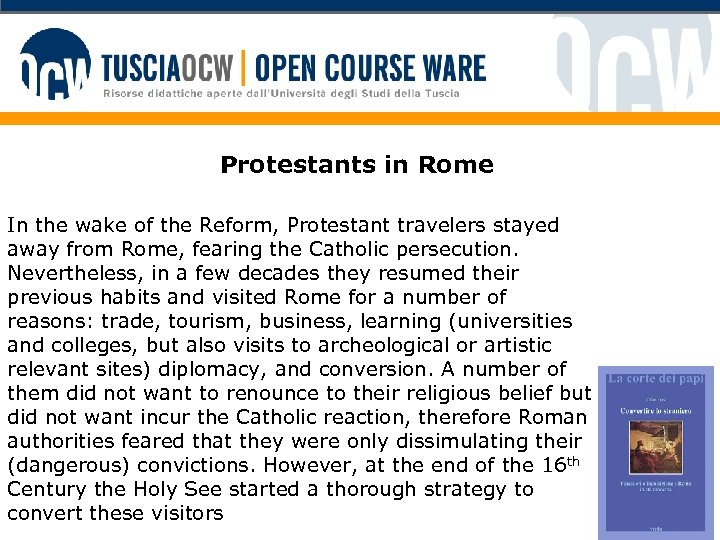 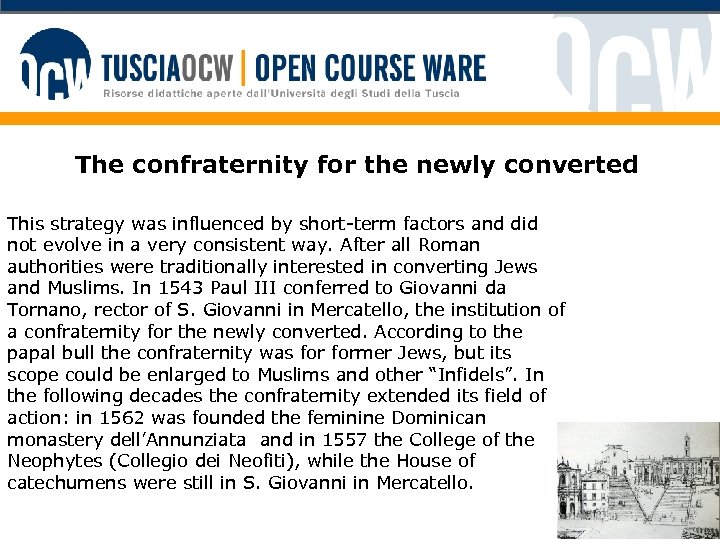 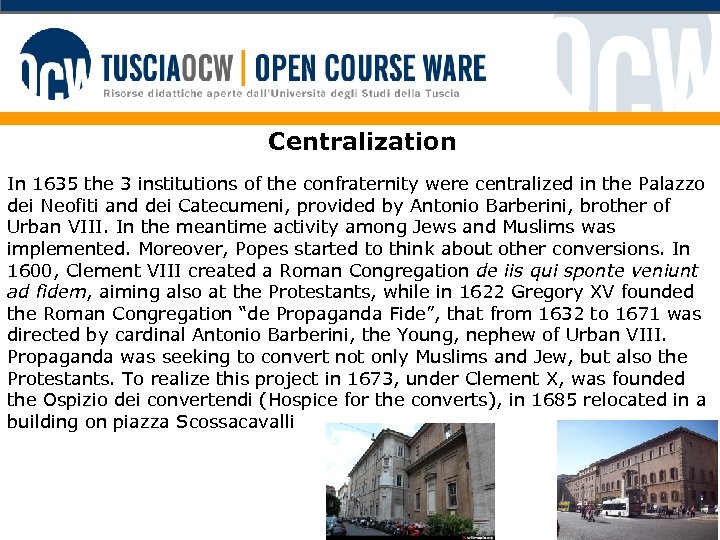 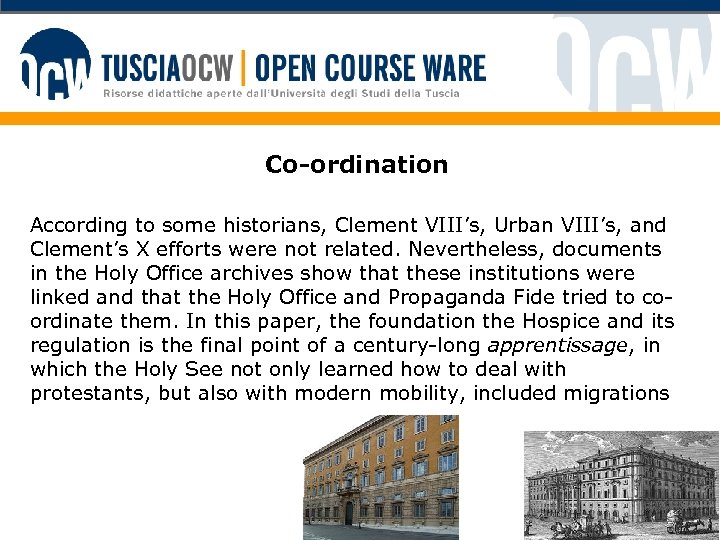 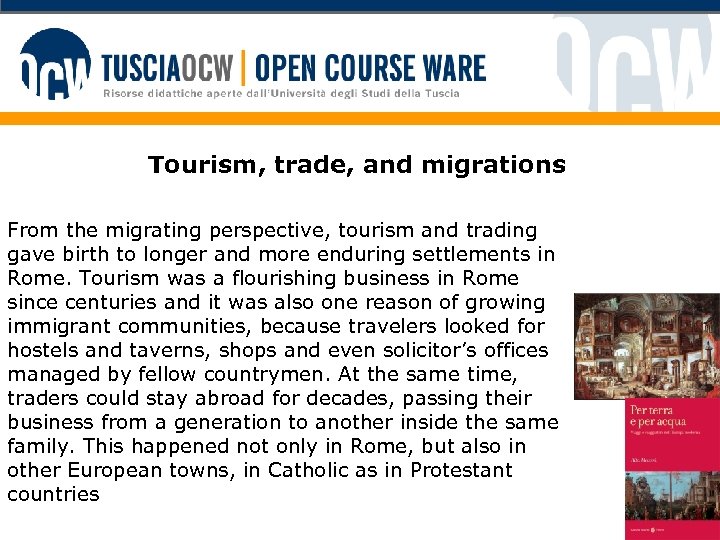 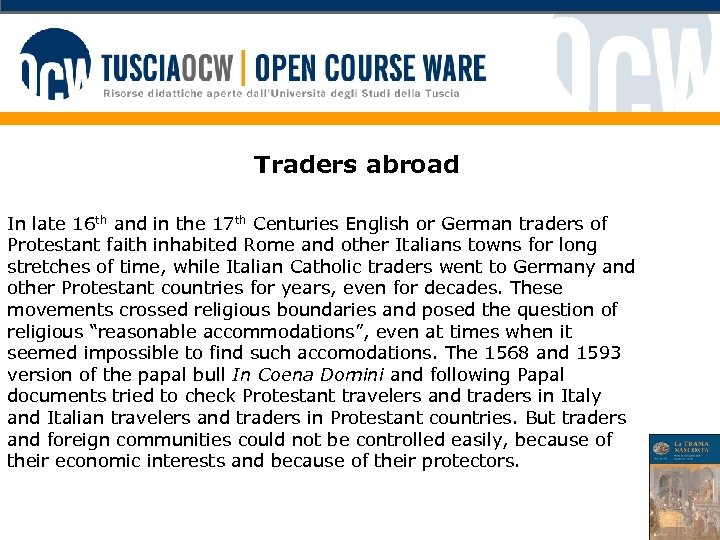 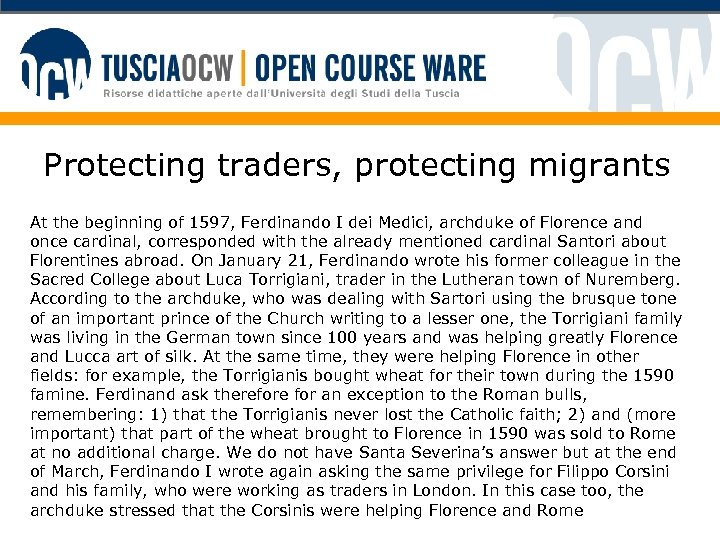 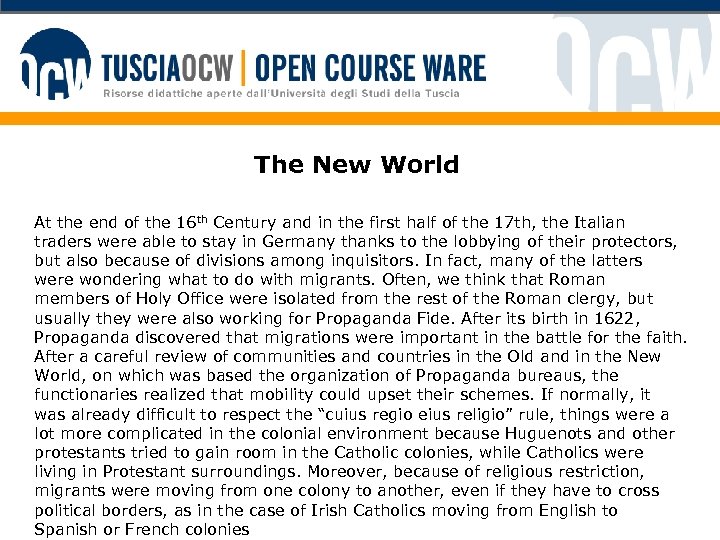 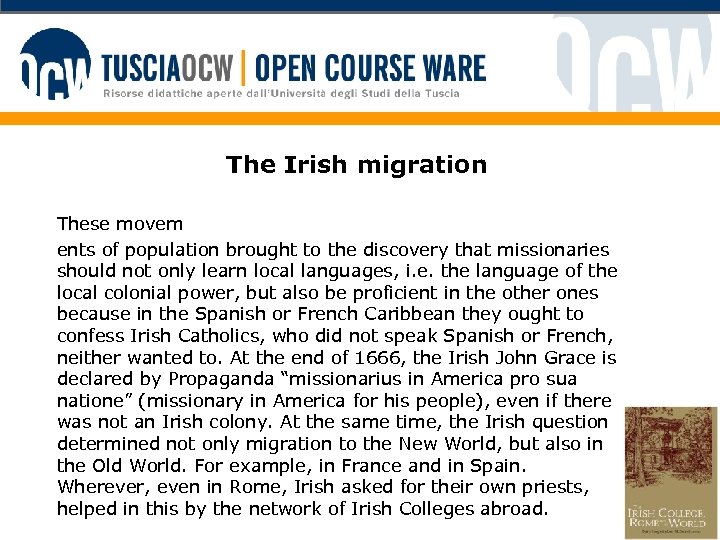 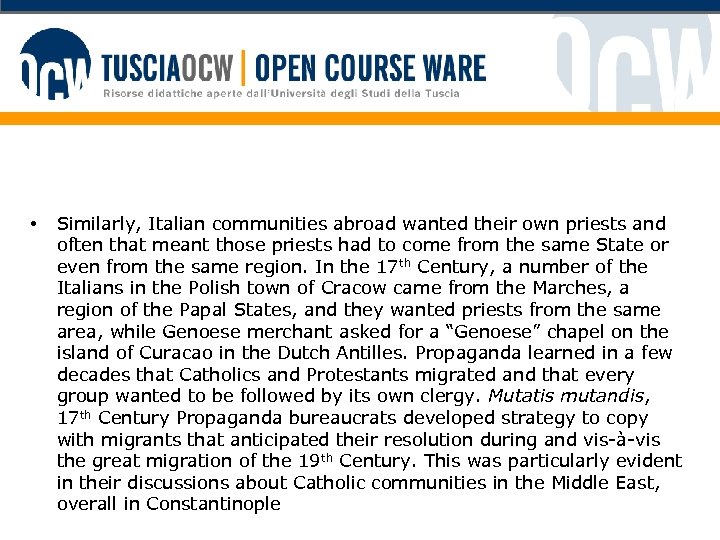 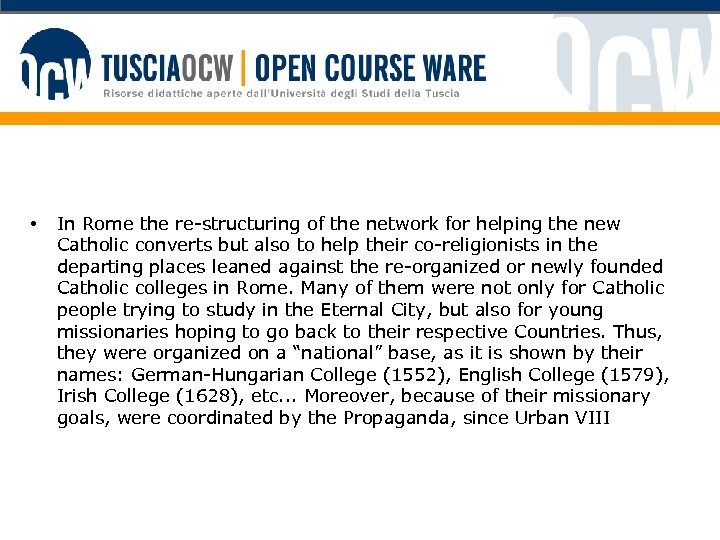 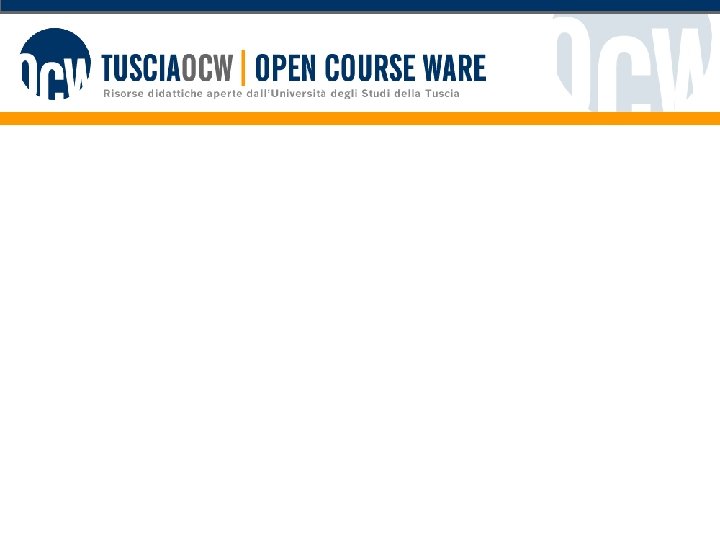 Protestants in Rome In the wake of the Reform, Protestant travelers stayed away from Rome, fearing the Catholic persecution. Nevertheless, in a few decades they resumed their previous habits and visited Rome for a number of reasons: trade, tourism, business, learning (universities and colleges, but also visits to archeological or artistic relevant sites) diplomacy, and conversion. A number of them did not want to renounce to their religious belief but did not want incur the Catholic reaction, therefore Roman authorities feared that they were only dissimulating their (dangerous) convictions. However, at the end of the 16 th Century the Holy See started a thorough strategy to convert these visitors

The confraternity for the newly converted This strategy was influenced by short-term factors and did not evolve in a very consistent way. After all Roman authorities were traditionally interested in converting Jews and Muslims. In 1543 Paul III conferred to Giovanni da Tornano, rector of S. Giovanni in Mercatello, the institution of a confraternity for the newly converted. According to the papal bull the confraternity was former Jews, but its scope could be enlarged to Muslims and other “Infidels”. In the following decades the confraternity extended its field of action: in 1562 was founded the feminine Dominican monastery dell’Annunziata and in 1557 the College of the Neophytes (Collegio dei Neofiti), while the House of catechumens were still in S. Giovanni in Mercatello.

Centralization In 1635 the 3 institutions of the confraternity were centralized in the Palazzo dei Neofiti and dei Catecumeni, provided by Antonio Barberini, brother of Urban VIII. In the meantime activity among Jews and Muslims was implemented. Moreover, Popes started to think about other conversions. In 1600, Clement VIII created a Roman Congregation de iis qui sponte veniunt ad fidem, aiming also at the Protestants, while in 1622 Gregory XV founded the Roman Congregation “de Propaganda Fide”, that from 1632 to 1671 was directed by cardinal Antonio Barberini, the Young, nephew of Urban VIII. Propaganda was seeking to convert not only Muslims and Jew, but also the Protestants. To realize this project in 1673, under Clement X, was founded the Ospizio dei convertendi (Hospice for the converts), in 1685 relocated in a building on piazza Scossacavalli

Co-ordination According to some historians, Clement VIII’s, Urban VIII’s, and Clement’s X efforts were not related. Nevertheless, documents in the Holy Office archives show that these institutions were linked and that the Holy Office and Propaganda Fide tried to coordinate them. In this paper, the foundation the Hospice and its regulation is the final point of a century-long apprentissage, in which the Holy See not only learned how to deal with protestants, but also with modern mobility, included migrations

Tourism, trade, and migrations From the migrating perspective, tourism and trading gave birth to longer and more enduring settlements in Rome. Tourism was a flourishing business in Rome since centuries and it was also one reason of growing immigrant communities, because travelers looked for hostels and taverns, shops and even solicitor’s offices managed by fellow countrymen. At the same time, traders could stay abroad for decades, passing their business from a generation to another inside the same family. This happened not only in Rome, but also in other European towns, in Catholic as in Protestant countries

Traders abroad In late 16 th and in the 17 th Centuries English or German traders of Protestant faith inhabited Rome and other Italians towns for long stretches of time, while Italian Catholic traders went to Germany and other Protestant countries for years, even for decades. These movements crossed religious boundaries and posed the question of religious “reasonable accommodations”, even at times when it seemed impossible to find such accomodations. The 1568 and 1593 version of the papal bull In Coena Domini and following Papal documents tried to check Protestant travelers and traders in Italy and Italian travelers and traders in Protestant countries. But traders and foreign communities could not be controlled easily, because of their economic interests and because of their protectors.

Protecting traders, protecting migrants At the beginning of 1597, Ferdinando I dei Medici, archduke of Florence and once cardinal, corresponded with the already mentioned cardinal Santori about Florentines abroad. On January 21, Ferdinando wrote his former colleague in the Sacred College about Luca Torrigiani, trader in the Lutheran town of Nuremberg. According to the archduke, who was dealing with Sartori using the brusque tone of an important prince of the Church writing to a lesser one, the Torrigiani family was living in the German town since 100 years and was helping greatly Florence and Lucca art of silk. At the same time, they were helping Florence in other fields: for example, the Torrigianis bought wheat for their town during the 1590 famine. Ferdinand ask therefore for an exception to the Roman bulls, remembering: 1) that the Torrigianis never lost the Catholic faith; 2) and (more important) that part of the wheat brought to Florence in 1590 was sold to Rome at no additional charge. We do not have Santa Severina’s answer but at the end of March, Ferdinando I wrote again asking the same privilege for Filippo Corsini and his family, who were working as traders in London. In this case too, the archduke stressed that the Corsinis were helping Florence and Rome

The New World At the end of the 16 th Century and in the first half of the 17 th, the Italian traders were able to stay in Germany thanks to the lobbying of their protectors, but also because of divisions among inquisitors. In fact, many of the latters were wondering what to do with migrants. Often, we think that Roman members of Holy Office were isolated from the rest of the Roman clergy, but usually they were also working for Propaganda Fide. After its birth in 1622, Propaganda discovered that migrations were important in the battle for the faith. After a careful review of communities and countries in the Old and in the New World, on which was based the organization of Propaganda bureaus, the functionaries realized that mobility could upset their schemes. If normally, it was already difficult to respect the “cuius regio eius religio” rule, things were a lot more complicated in the colonial environment because Huguenots and other protestants tried to gain room in the Catholic colonies, while Catholics were living in Protestant surroundings. Moreover, because of religious restriction, migrants were moving from one colony to another, even if they have to cross political borders, as in the case of Irish Catholics moving from English to Spanish or French colonies

The Irish migration These movem ents of population brought to the discovery that missionaries should not only learn local languages, i. e. the language of the local colonial power, but also be proficient in the other ones because in the Spanish or French Caribbean they ought to confess Irish Catholics, who did not speak Spanish or French, neither wanted to. At the end of 1666, the Irish John Grace is declared by Propaganda “missionarius in America pro sua natione” (missionary in America for his people), even if there was not an Irish colony. At the same time, the Irish question determined not only migration to the New World, but also in the Old World. For example, in France and in Spain. Wherever, even in Rome, Irish asked for their own priests, helped in this by the network of Irish Colleges abroad.

• Similarly, Italian communities abroad wanted their own priests and often that meant those priests had to come from the same State or even from the same region. In the 17 th Century, a number of the Italians in the Polish town of Cracow came from the Marches, a region of the Papal States, and they wanted priests from the same area, while Genoese merchant asked for a “Genoese” chapel on the island of Curacao in the Dutch Antilles. Propaganda learned in a few decades that Catholics and Protestants migrated and that every group wanted to be followed by its own clergy. Mutatis mutandis, 17 th Century Propaganda bureaucrats developed strategy to copy with migrants that anticipated their resolution during and vis-à-vis the great migration of the 19 th Century. This was particularly evident in their discussions about Catholic communities in the Middle East, overall in Constantinople

• In Rome the re-structuring of the network for helping the new Catholic converts but also to help their co-religionists in the departing places leaned against the re-organized or newly founded Catholic colleges in Rome. Many of them were not only for Catholic people trying to study in the Eternal City, but also for young missionaries hoping to go back to their respective Countries. Thus, they were organized on a “national” base, as it is shown by their names: German-Hungarian College (1552), English College (1579), Irish College (1628), etc. . . Moreover, because of their missionary goals, were coordinated by the Propaganda, since Urban VIII