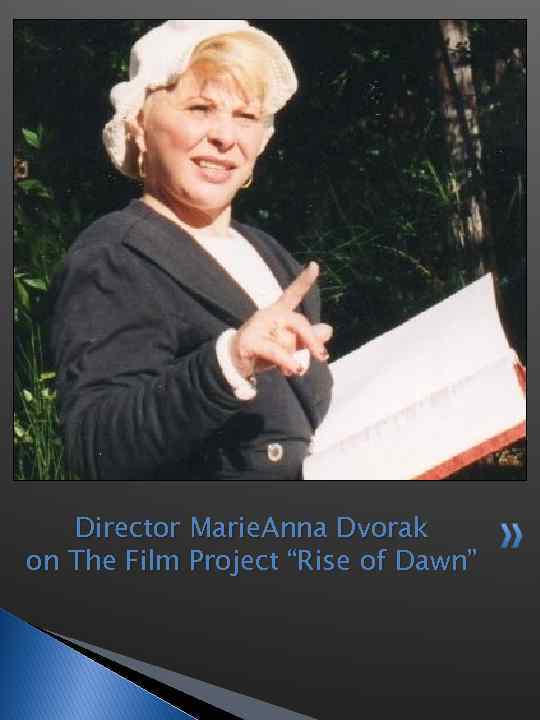 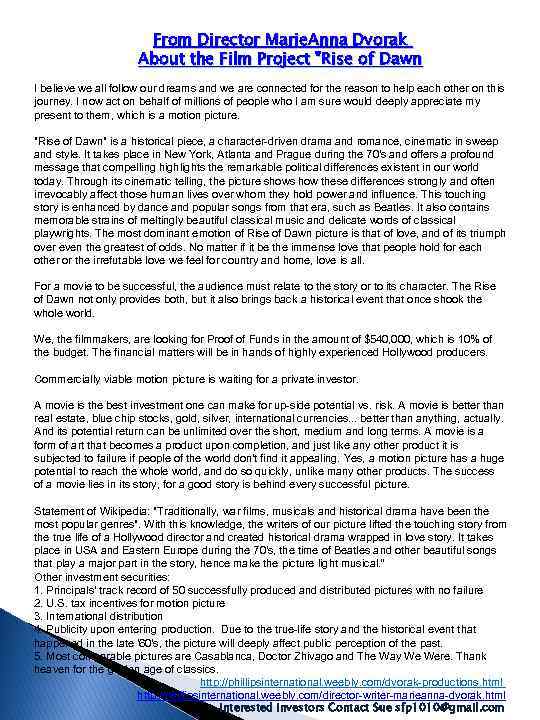 From Director Marie. Anna Dvorak About the Film Project "Rise of Dawn I believe we all follow our dreams and we are connected for the reason to help each other on this journey. I now act on behalf of millions of people who I am sure would deeply appreciate my present to them, which is a motion picture. "Rise of Dawn" is a historical piece, a character-driven drama and romance, cinematic in sweep and style. It takes place in New York, Atlanta and Prague during the 70's and offers a profound message that compelling highlights the remarkable political differences existent in our world today. Through its cinematic telling, the picture shows how these differences strongly and often irrevocably affect those human lives over whom they hold power and influence. This touching story is enhanced by dance and popular songs from that era, such as Beatles. It also contains memorable strains of meltingly beautiful classical music and delicate words of classical playwrights. The most dominant emotion of Rise of Dawn picture is that of love, and of its triumph over even the greatest of odds. No matter if it be the immense love that people hold for each other or the irrefutable love we feel for country and home, love is all. For a movie to be successful, the audience must relate to the story or to its character. The Rise of Dawn not only provides both, but it also brings back a historical event that once shook the whole world. We, the filmmakers, are looking for Proof of Funds in the amount of $540, 000, which is 10% of the budget. The financial matters will be in hands of highly experienced Hollywood producers. Commercially viable motion picture is waiting for a private investor. A movie is the best investment one can make for up-side potential vs. risk. A movie is better than real estate, blue chip stocks, gold, silver, international currencies. . . better than anything, actually. And its potential return can be unlimited over the short, medium and long terms. A movie is a form of art that becomes a product upon completion, and just like any other product it is subjected to failure if people of the world don't find it appealing. Yes, a motion picture has a huge potential to reach the whole world, and do so quickly, unlike many other products. The success of a movie lies in its story, for a good story is behind every successful picture. Statement of Wikipedia: "Traditionally, war films, musicals and historical drama have been the most popular genres". With this knowledge, the writers of our picture lifted the touching story from the true life of a Hollywood director and created historical drama wrapped in love story. It takes place in USA and Eastern Europe during the 70's, the time of Beatles and other beautiful songs that play a major part in the story, hence make the picture light musical. “ Other investment securities: 1. Principals' track record of 50 successfully produced and distributed pictures with no failure 2. U. S. tax incentives for motion picture 3. International distribution 4. Publicity upon entering production. Due to the true-life story and the historical event that happened in the late '60's, the picture will deeply affect public perception of the past. 5. Most comparable pictures are Casablanca, Doctor Zhivago and The Way We Were. Thank heaven for the golden age of classics. http: //phillipsinternational. weebly. com/dvorak-productions. html http: //phillipsinternational. weebly. com/director-writer-marieanna-dvorak. html Interested Investors Contact Sue sfp [email protected] com