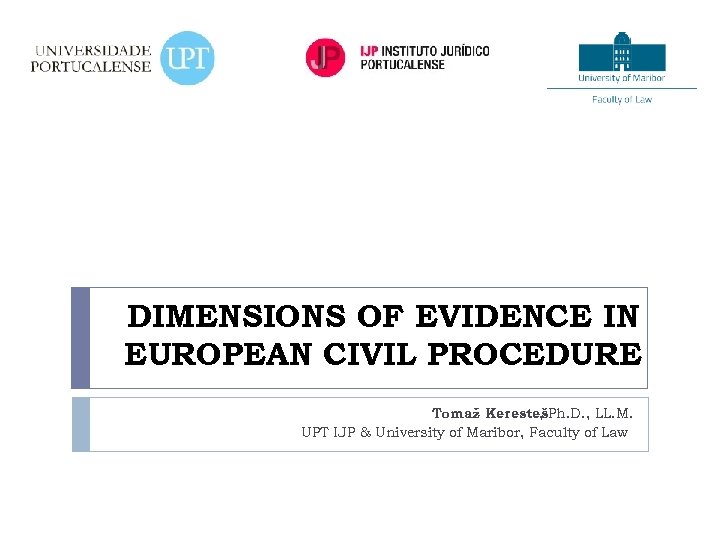 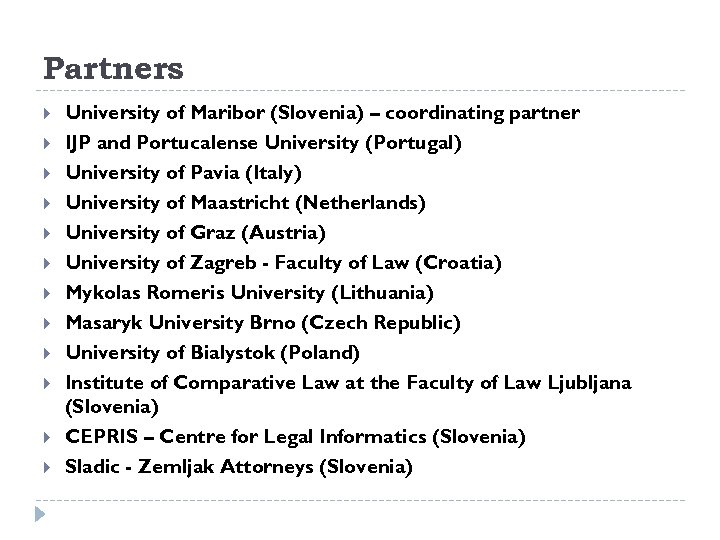 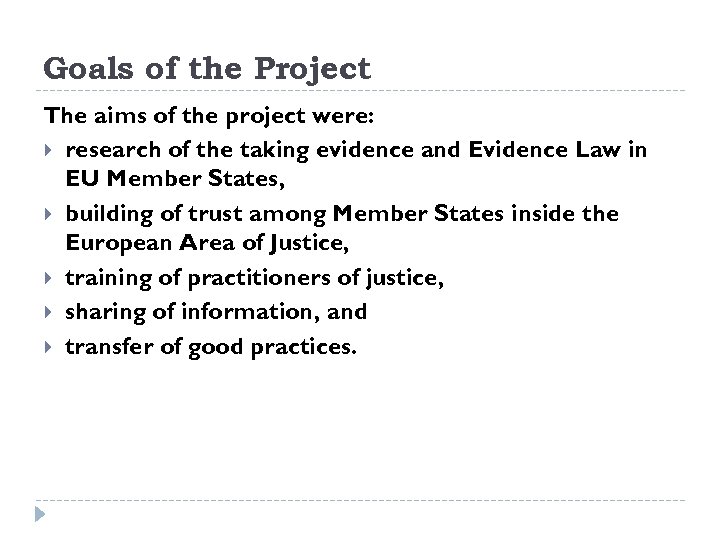 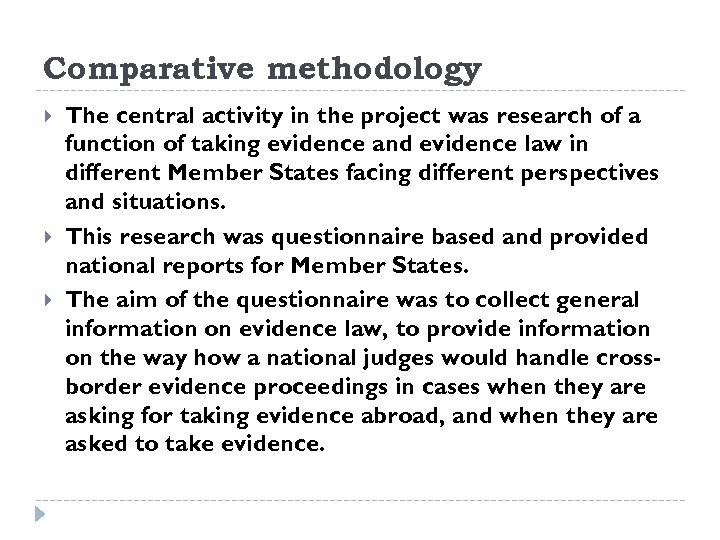 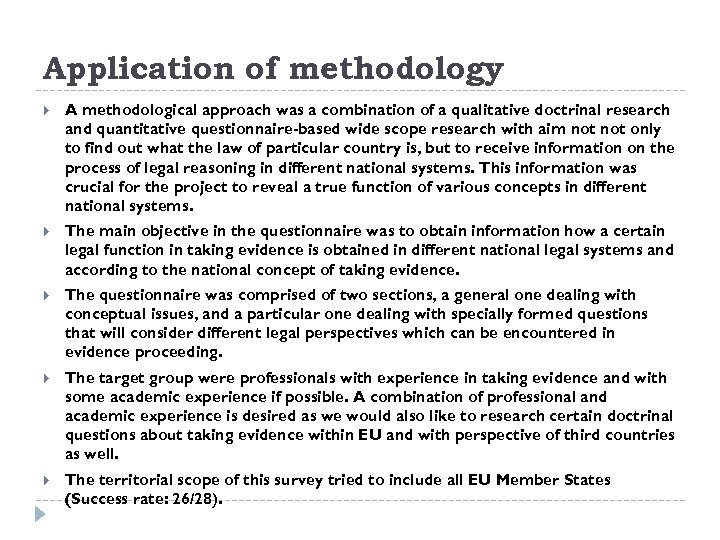 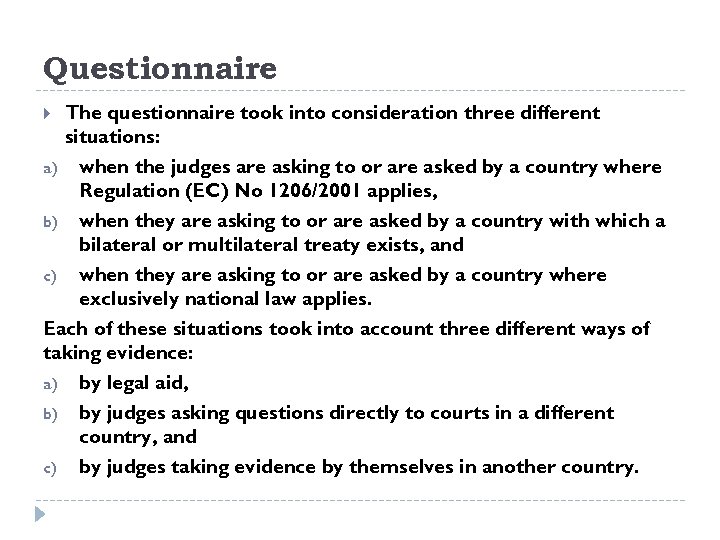 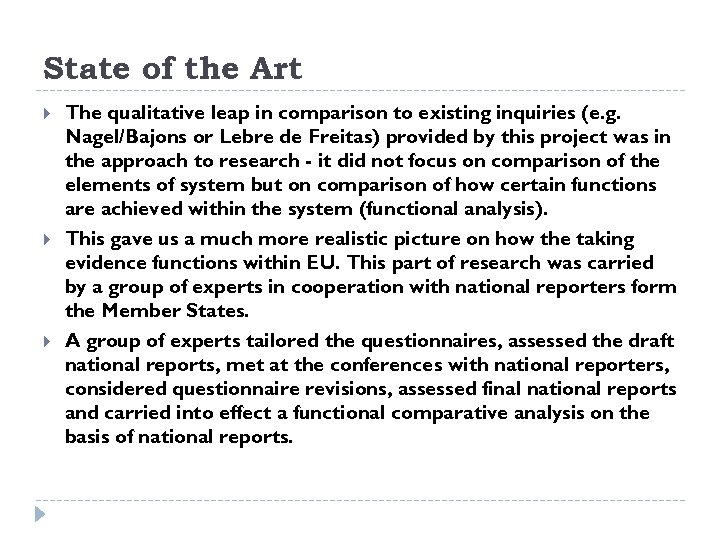 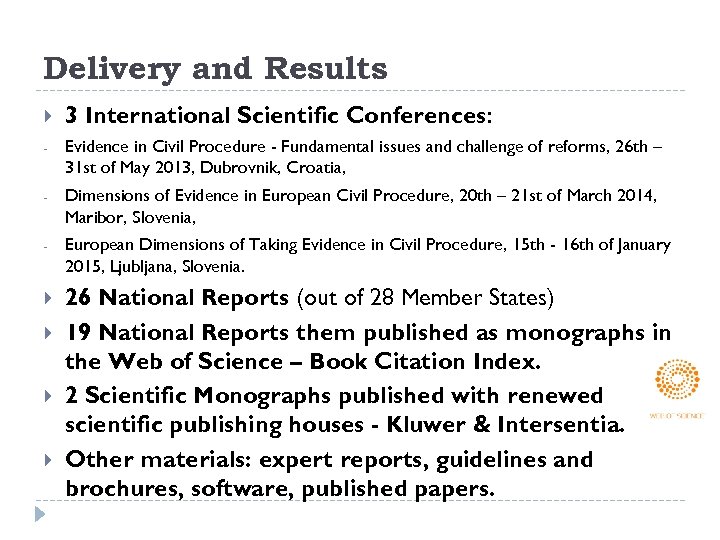 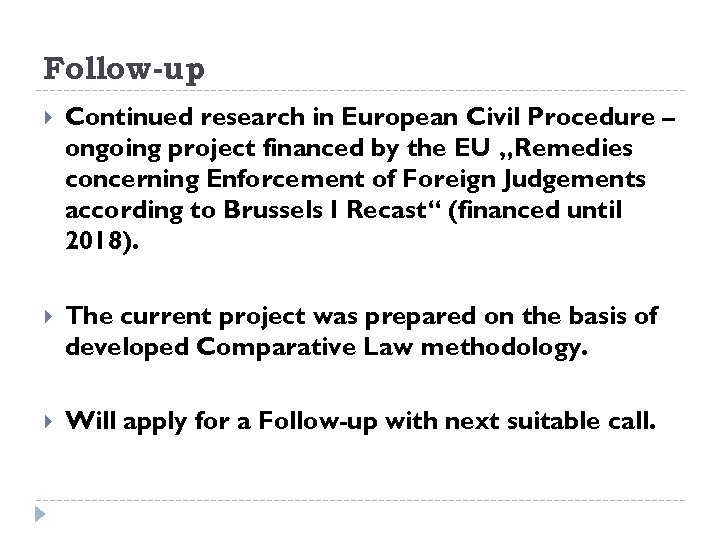 Research Topic Research of a possible existence of a common core of European Law of Evidence (and taking evidence in particular), its content, and its most important points of discord among the national legal systems. The aim of the project was to set a starting point for possible further harmonization or unification in the field of Evidence Law. In addition the project attempted to improve mutual trust among national courts inside the EU with presenting a clear picture of what the national courts in Member States do in matters of evidence. Special emphasis was given to application of modern information and communication technology in taking of evidence.

Goals of the Project The aims of the project were: research of the taking evidence and Evidence Law in EU Member States, building of trust among Member States inside the European Area of Justice, training of practitioners of justice, sharing of information, and transfer of good practices.

Comparative methodology The central activity in the project was research of a function of taking evidence and evidence law in different Member States facing different perspectives and situations. This research was questionnaire based and provided national reports for Member States. The aim of the questionnaire was to collect general information on evidence law, to provide information on the way how a national judges would handle crossborder evidence proceedings in cases when they are asking for taking evidence abroad, and when they are asked to take evidence.

Application of methodology A methodological approach was a combination of a qualitative doctrinal research and quantitative questionnaire-based wide scope research with aim not only to find out what the law of particular country is, but to receive information on the process of legal reasoning in different national systems. This information was crucial for the project to reveal a true function of various concepts in different national systems. The main objective in the questionnaire was to obtain information how a certain legal function in taking evidence is obtained in different national legal systems and according to the national concept of taking evidence. The questionnaire was comprised of two sections, a general one dealing with conceptual issues, and a particular one dealing with specially formed questions that will consider different legal perspectives which can be encountered in evidence proceeding. The target group were professionals with experience in taking evidence and with some academic experience if possible. A combination of professional and academic experience is desired as we would also like to research certain doctrinal questions about taking evidence within EU and with perspective of third countries as well. The territorial scope of this survey tried to include all EU Member States (Success rate: 26/28).

State of the Art The qualitative leap in comparison to existing inquiries (e. g. Nagel/Bajons or Lebre de Freitas) provided by this project was in the approach to research - it did not focus on comparison of the elements of system but on comparison of how certain functions are achieved within the system (functional analysis). This gave us a much more realistic picture on how the taking evidence functions within EU. This part of research was carried by a group of experts in cooperation with national reporters form the Member States. A group of experts tailored the questionnaires, assessed the draft national reports, met at the conferences with national reporters, considered questionnaire revisions, assessed final national reports and carried into effect a functional comparative analysis on the basis of national reports.

Follow-up Continued research in European Civil Procedure – ongoing project financed by the EU „Remedies concerning Enforcement of Foreign Judgements according to Brussels I Recast“ (financed until 2018). The current project was prepared on the basis of developed Comparative Law methodology. Will apply for a Follow-up with next suitable call.