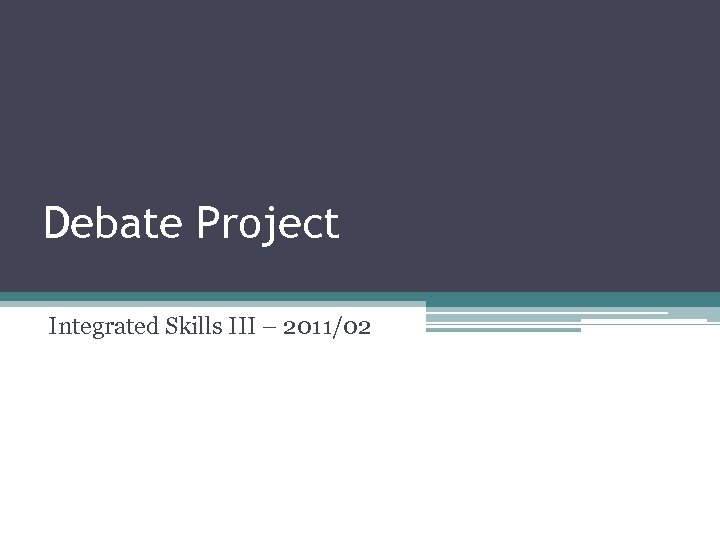 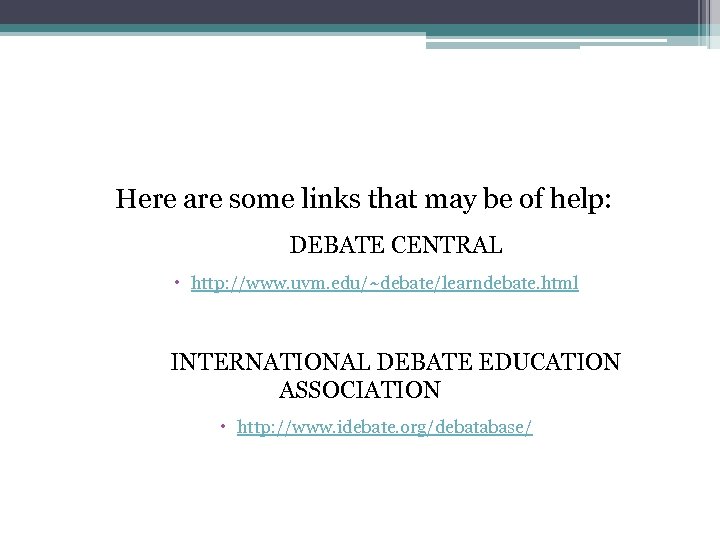 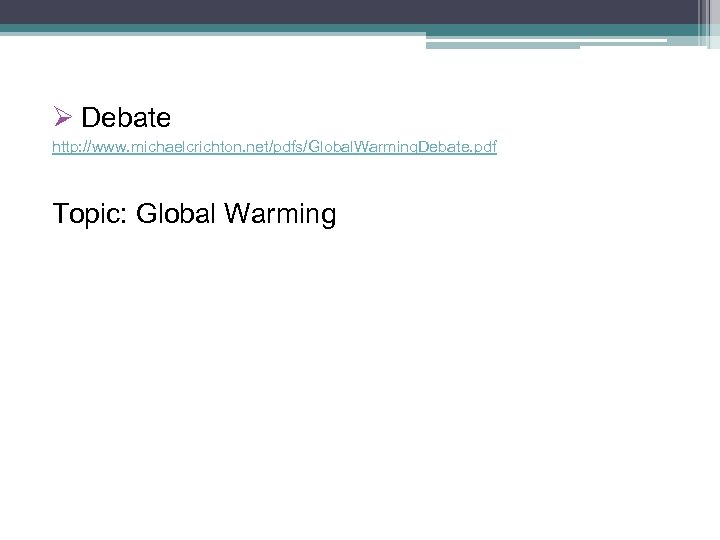 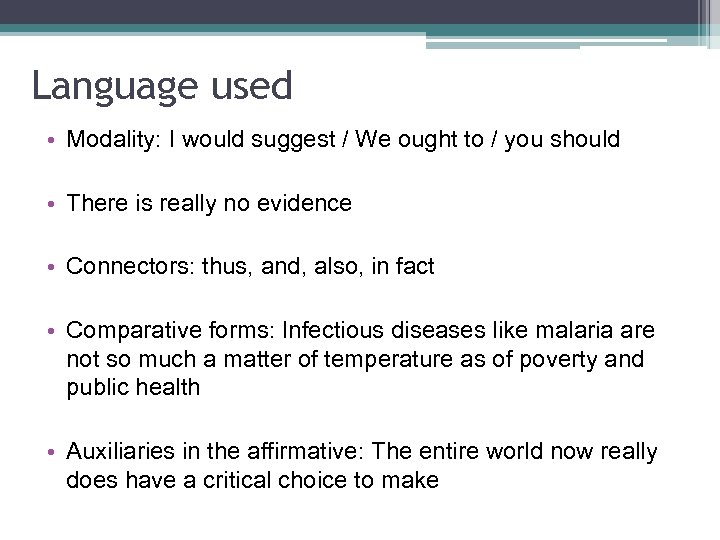 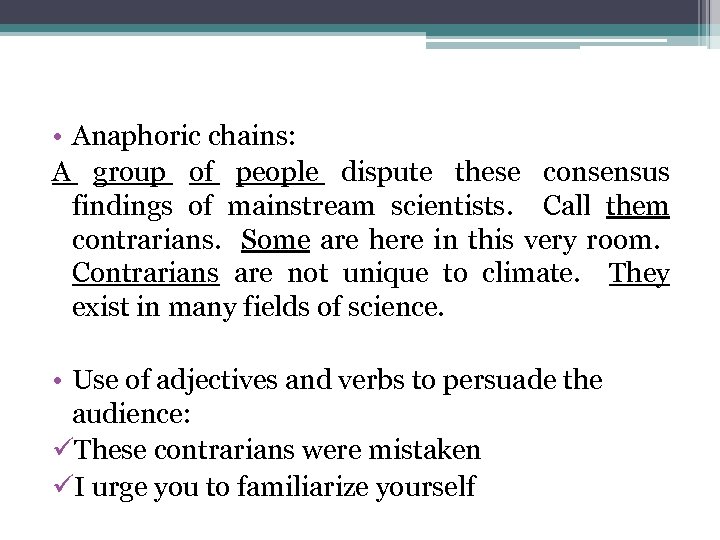 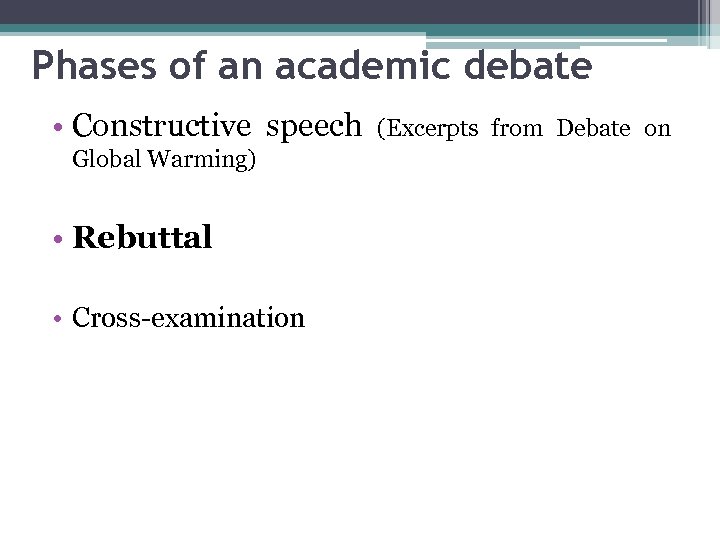 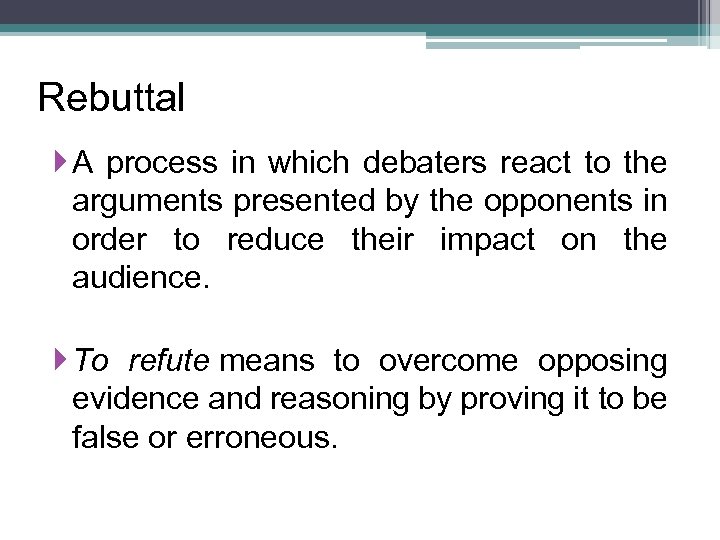 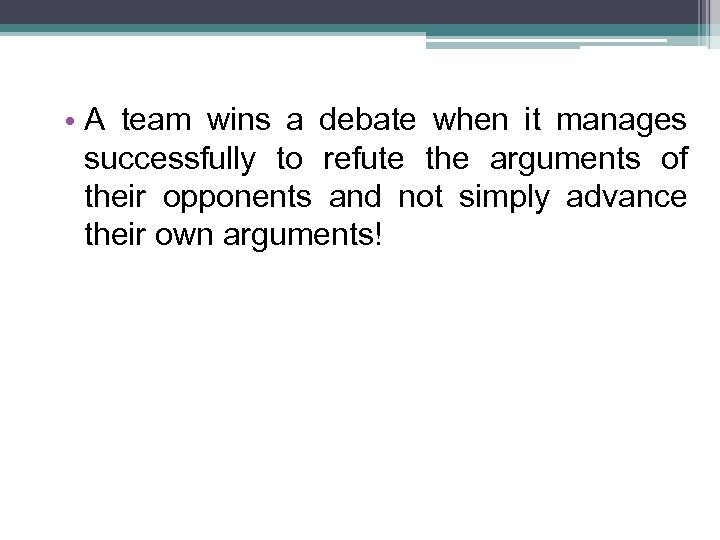 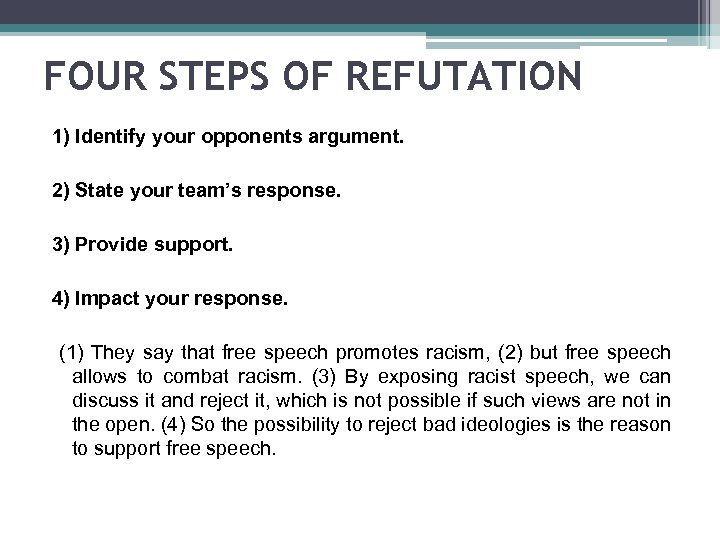 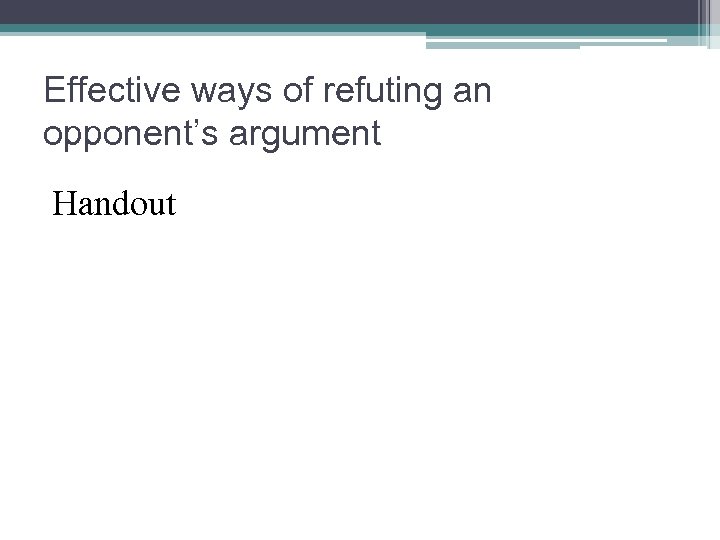 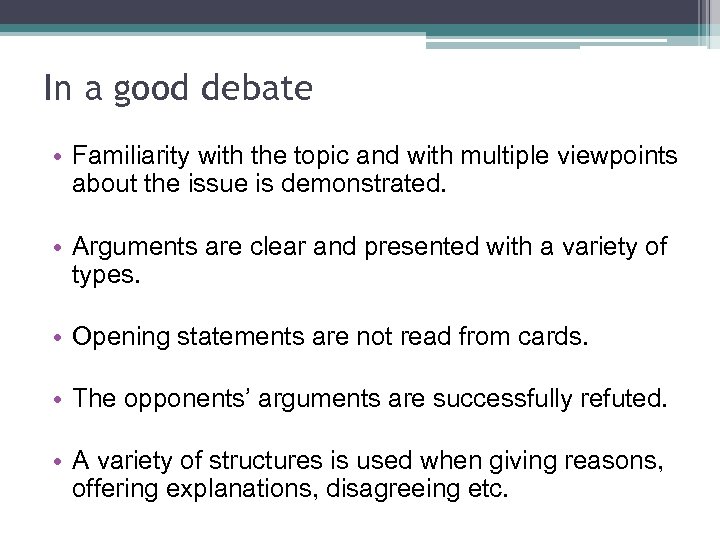 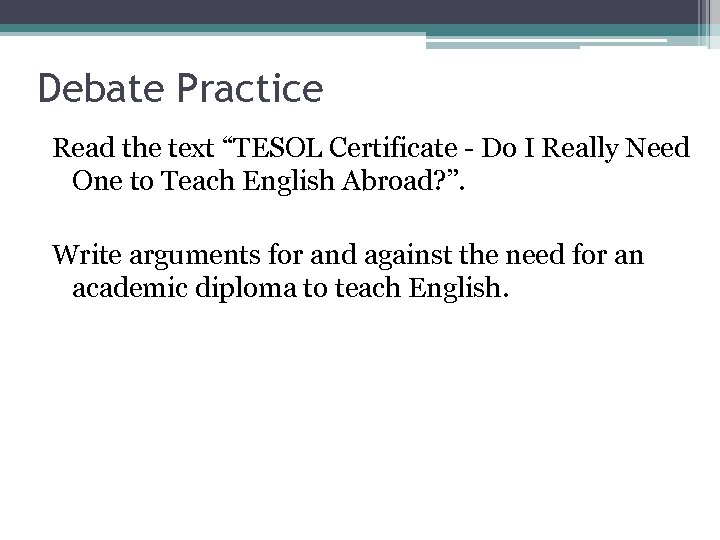 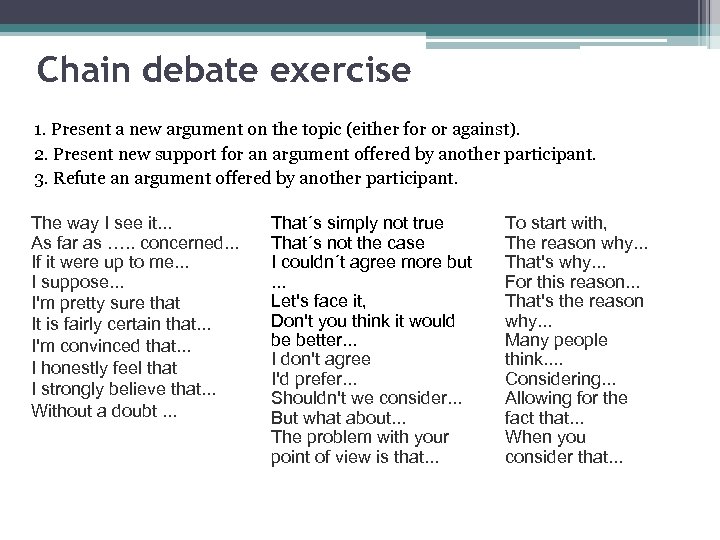 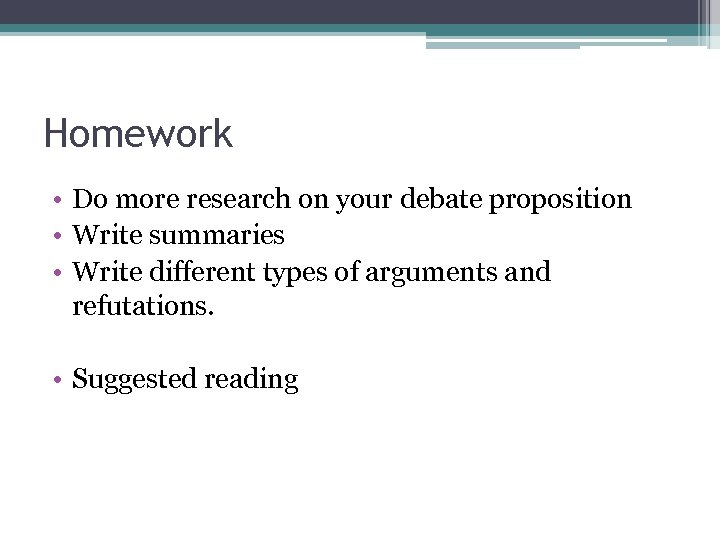 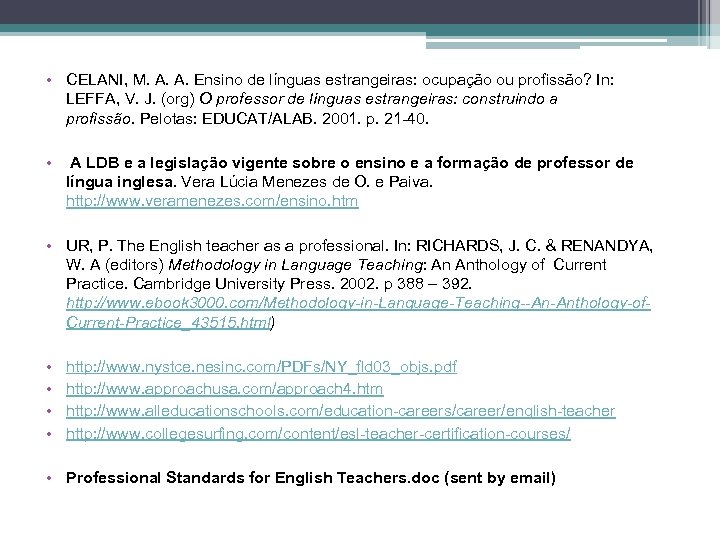 Language used • Modality: I would suggest / We ought to / you should • There is really no evidence • Connectors: thus, and, also, in fact • Comparative forms: Infectious diseases like malaria are not so much a matter of temperature as of poverty and public health • Auxiliaries in the affirmative: The entire world now really does have a critical choice to make

• Anaphoric chains: A group of people dispute these consensus findings of mainstream scientists. Call them contrarians. Some are here in this very room. Contrarians are not unique to climate. They exist in many fields of science. • Use of adjectives and verbs to persuade the audience: üThese contrarians were mistaken üI urge you to familiarize yourself

Rebuttal A process in which debaters react to the arguments presented by the opponents in order to reduce their impact on the audience. To refute means to overcome opposing evidence and reasoning by proving it to be false or erroneous.

• A team wins a debate when it manages successfully to refute the arguments of their opponents and not simply advance their own arguments!

FOUR STEPS OF REFUTATION 1) Identify your opponents argument. 2) State your team’s response. 3) Provide support. 4) Impact your response. (1) They say that free speech promotes racism, (2) but free speech allows to combat racism. (3) By exposing racist speech, we can discuss it and reject it, which is not possible if such views are not in the open. (4) So the possibility to reject bad ideologies is the reason to support free speech.

In a good debate • Familiarity with the topic and with multiple viewpoints about the issue is demonstrated. • Arguments are clear and presented with a variety of types. • Opening statements are not read from cards. • The opponents’ arguments are successfully refuted. • A variety of structures is used when giving reasons, offering explanations, disagreeing etc.

Debate Practice Read the text “TESOL Certificate - Do I Really Need One to Teach English Abroad? ”. Write arguments for and against the need for an academic diploma to teach English.