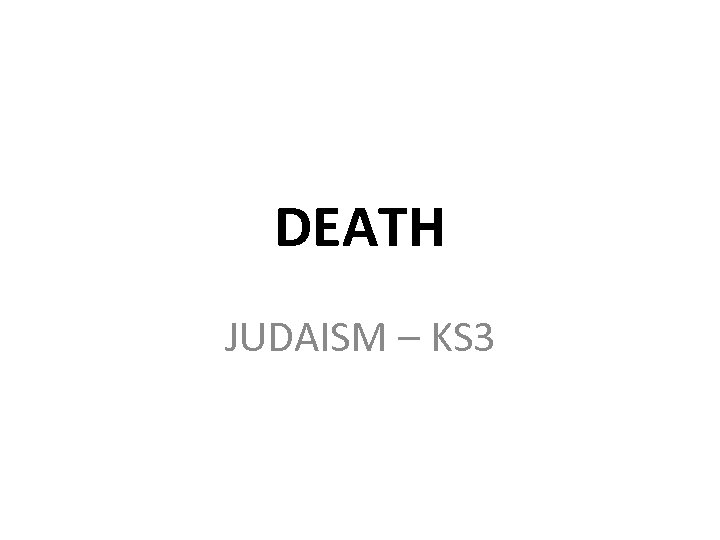 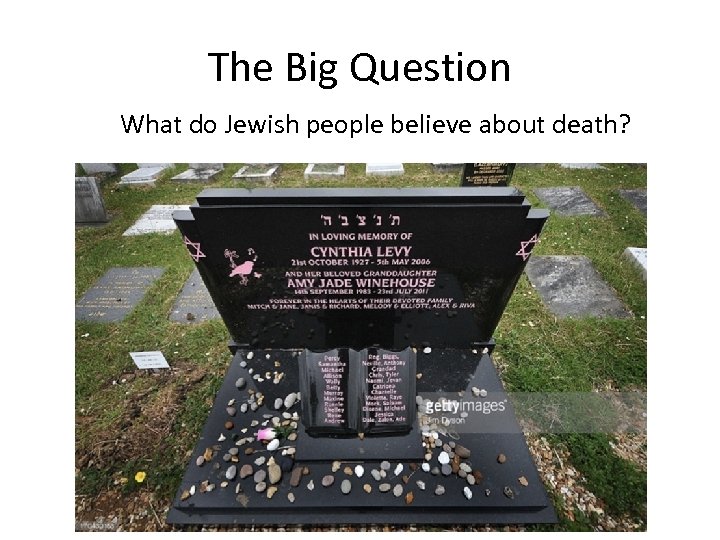 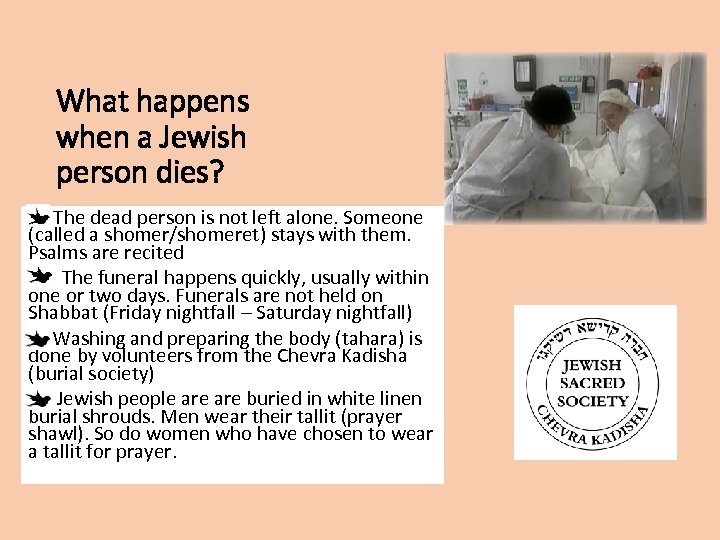 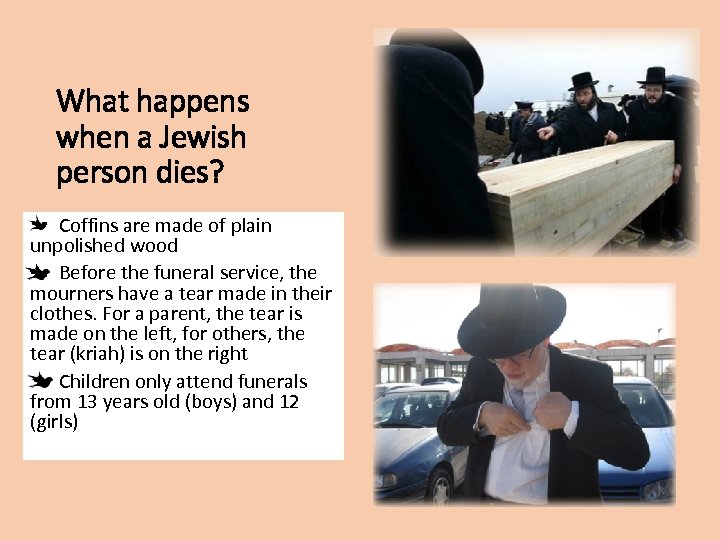 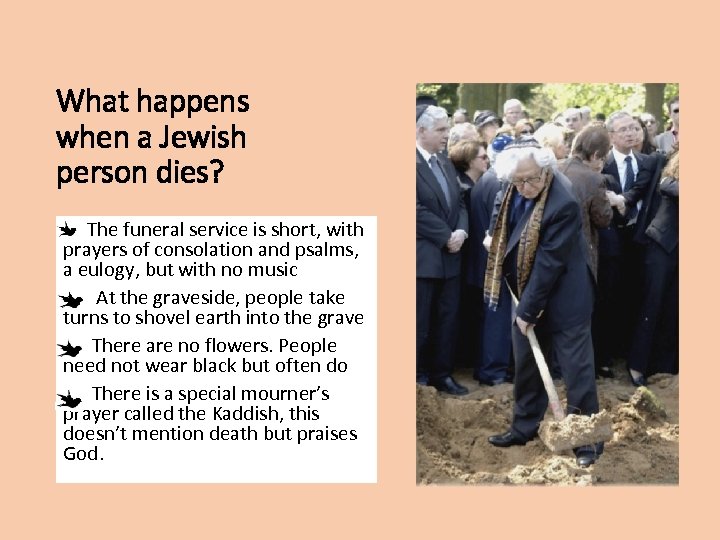 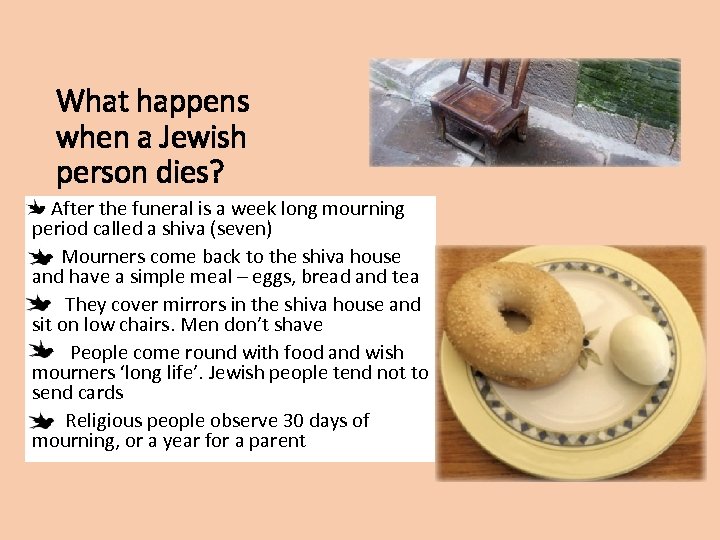 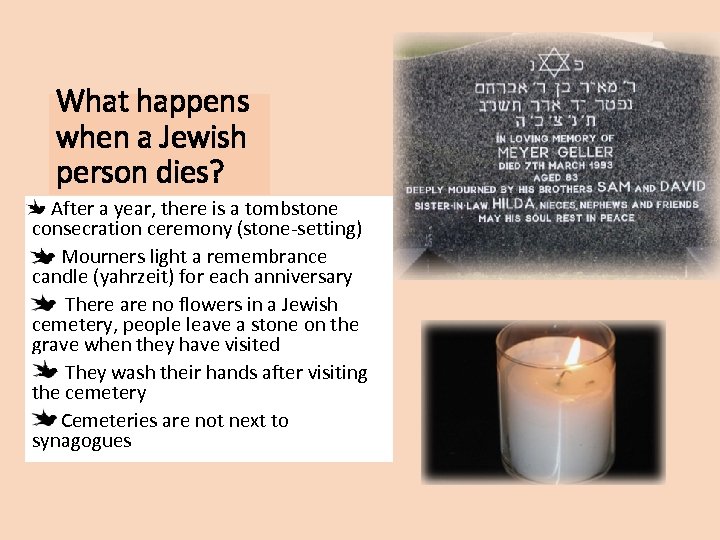 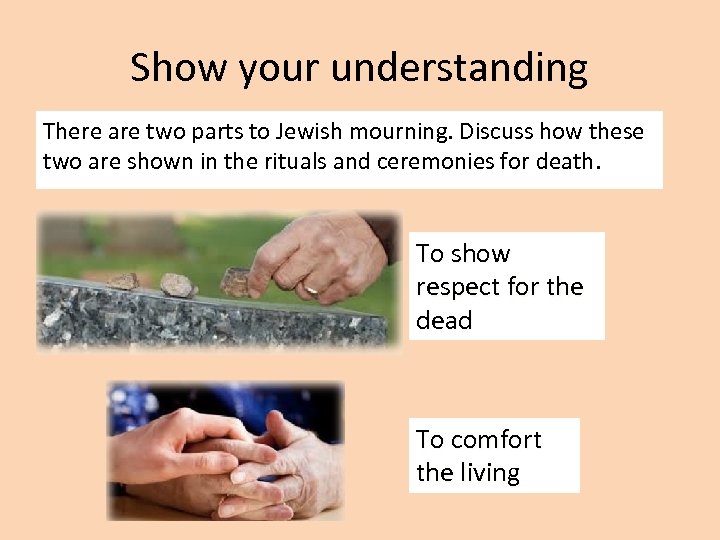 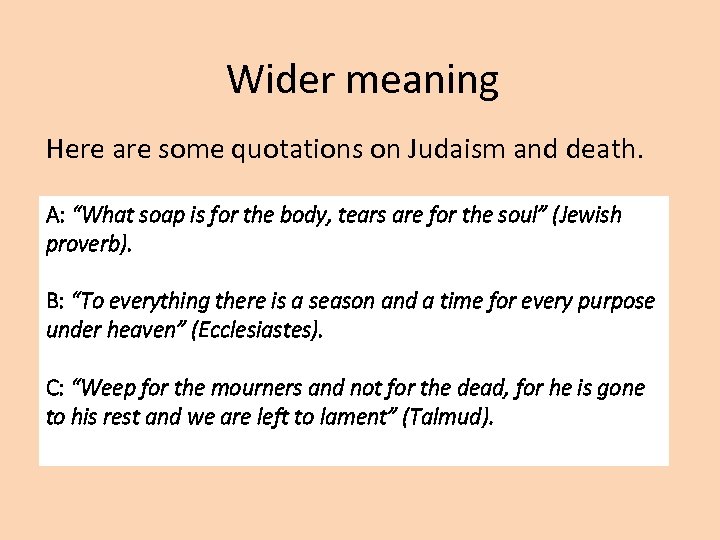 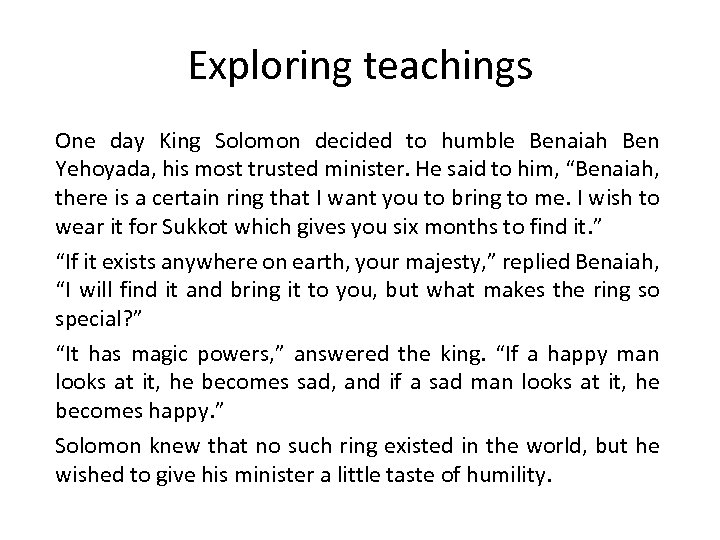 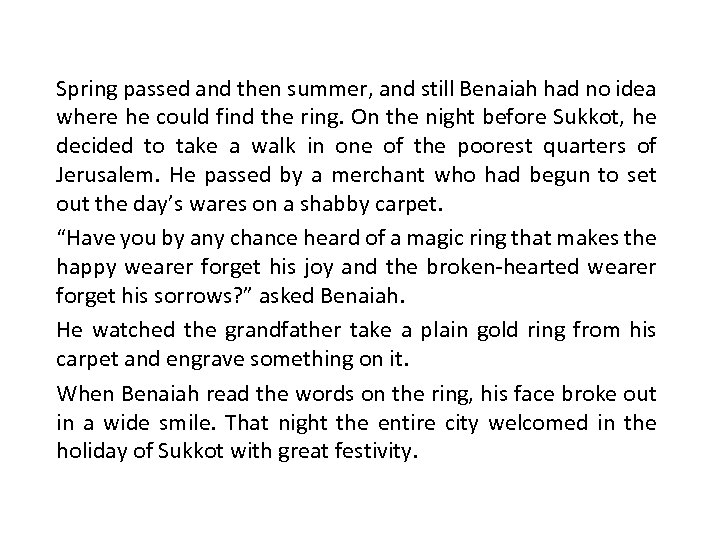 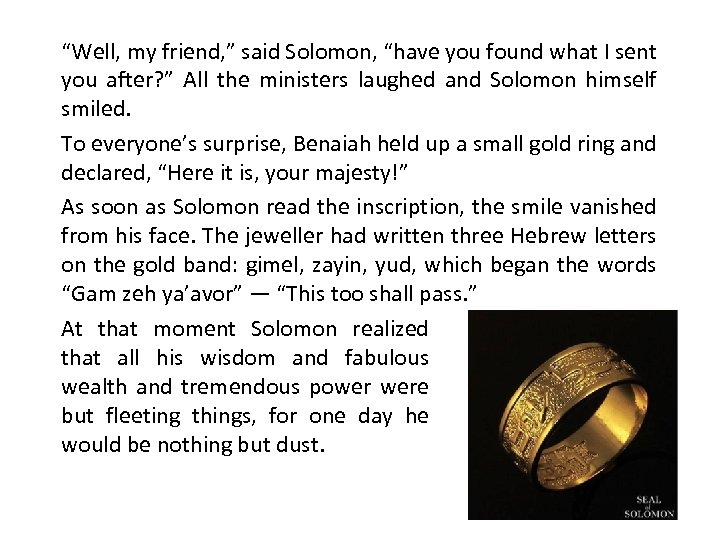 The Big Question What do Jewish people believe about death?

What happens when a Jewish person dies? The dead person is not left alone. Someone (called a shomer/shomeret) stays with them. Psalms are recited The funeral happens quickly, usually within one or two days. Funerals are not held on Shabbat (Friday nightfall – Saturday nightfall) Washing and preparing the body (tahara) is done by volunteers from the Chevra Kadisha (burial society) Jewish people are buried in white linen burial shrouds. Men wear their tallit (prayer shawl). So do women who have chosen to wear a tallit for prayer.

What happens when a Jewish person dies? Coffins are made of plain unpolished wood Before the funeral service, the mourners have a tear made in their clothes. For a parent, the tear is made on the left, for others, the tear (kriah) is on the right Children only attend funerals from 13 years old (boys) and 12 (girls)

What happens when a Jewish person dies? The funeral service is short, with prayers of consolation and psalms, a eulogy, but with no music At the graveside, people take turns to shovel earth into the grave There are no flowers. People need not wear black but often do There is a special mourner’s prayer called the Kaddish, this doesn’t mention death but praises God.

What happens when a Jewish person dies? After the funeral is a week long mourning period called a shiva (seven) Mourners come back to the shiva house and have a simple meal – eggs, bread and tea They cover mirrors in the shiva house and sit on low chairs. Men don’t shave People come round with food and wish mourners ‘long life’. Jewish people tend not to send cards Religious people observe 30 days of mourning, or a year for a parent

What happens when a Jewish person dies? After a year, there is a tombstone consecration ceremony (stone-setting) Mourners light a remembrance candle (yahrzeit) for each anniversary There are no flowers in a Jewish cemetery, people leave a stone on the grave when they have visited They wash their hands after visiting the cemetery Cemeteries are not next to synagogues

Show your understanding There are two parts to Jewish mourning. Discuss how these two are shown in the rituals and ceremonies for death. To show respect for the dead To comfort the living

Wider meaning Here are some quotations on Judaism and death. A: “What soap is for the body, tears are for the soul” (Jewish proverb). B: “To everything there is a season and a time for every purpose under heaven” (Ecclesiastes). C: “Weep for the mourners and not for the dead, for he is gone to his rest and we are left to lament” (Talmud).

Exploring teachings One day King Solomon decided to humble Benaiah Ben Yehoyada, his most trusted minister. He said to him, “Benaiah, there is a certain ring that I want you to bring to me. I wish to wear it for Sukkot which gives you six months to find it. ” “If it exists anywhere on earth, your majesty, ” replied Benaiah, “I will find it and bring it to you, but what makes the ring so special? ” “It has magic powers, ” answered the king. “If a happy man looks at it, he becomes sad, and if a sad man looks at it, he becomes happy. ” Solomon knew that no such ring existed in the world, but he wished to give his minister a little taste of humility.

Spring passed and then summer, and still Benaiah had no idea where he could find the ring. On the night before Sukkot, he decided to take a walk in one of the poorest quarters of Jerusalem. He passed by a merchant who had begun to set out the day’s wares on a shabby carpet. “Have you by any chance heard of a magic ring that makes the happy wearer forget his joy and the broken-hearted wearer forget his sorrows? ” asked Benaiah. He watched the grandfather take a plain gold ring from his carpet and engrave something on it. When Benaiah read the words on the ring, his face broke out in a wide smile. That night the entire city welcomed in the holiday of Sukkot with great festivity.

“Well, my friend, ” said Solomon, “have you found what I sent you after? ” All the ministers laughed and Solomon himself smiled. To everyone’s surprise, Benaiah held up a small gold ring and declared, “Here it is, your majesty!” As soon as Solomon read the inscription, the smile vanished from his face. The jeweller had written three Hebrew letters on the gold band: gimel, zayin, yud, which began the words “Gam zeh ya’avor” — “This too shall pass. ” At that moment Solomon realized that all his wisdom and fabulous wealth and tremendous power were but fleeting things, for one day he would be nothing but dust.