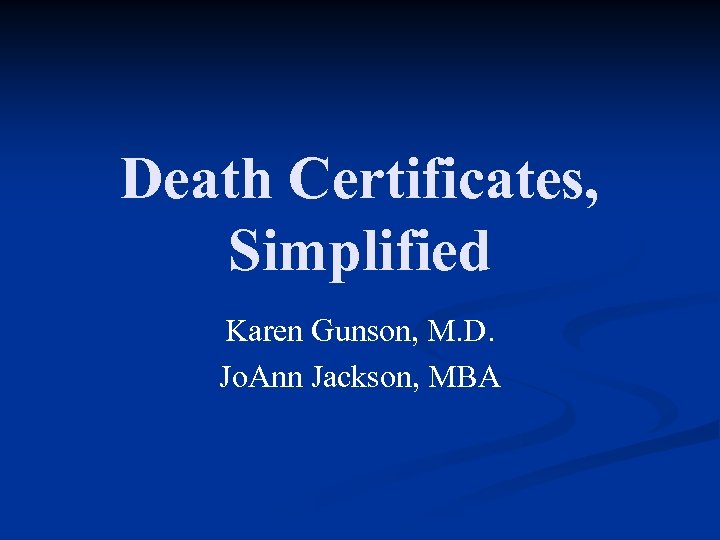 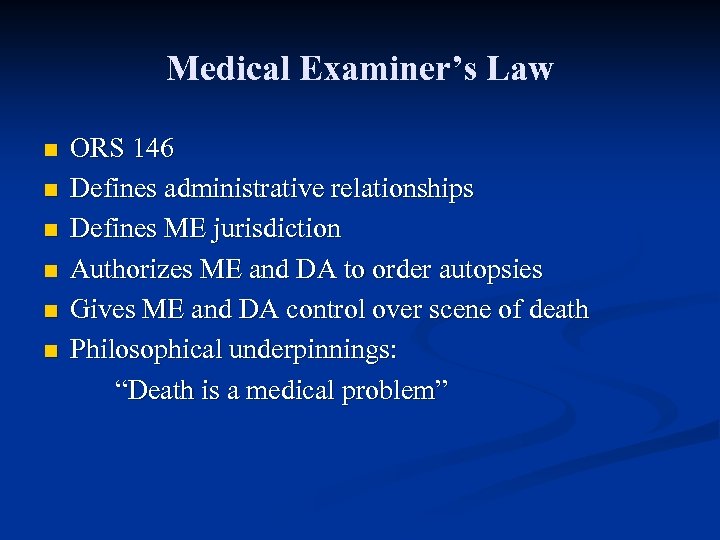 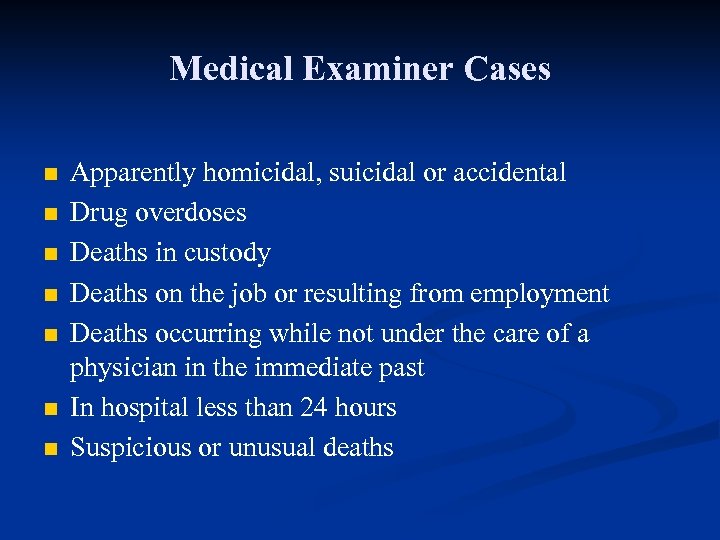 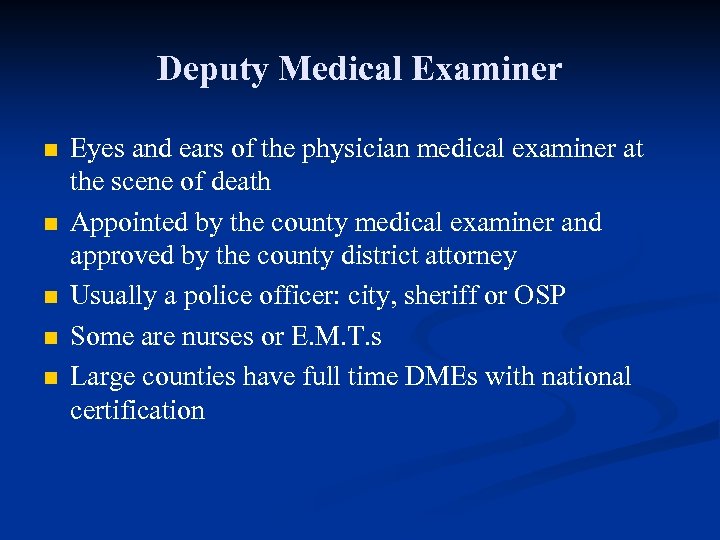 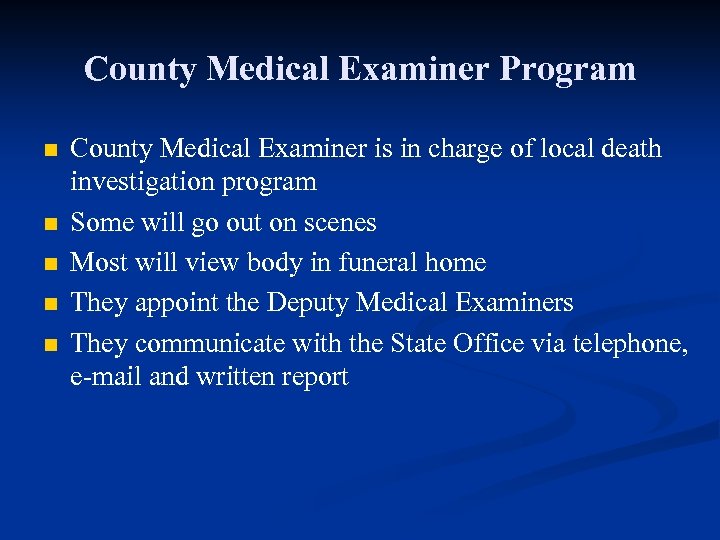 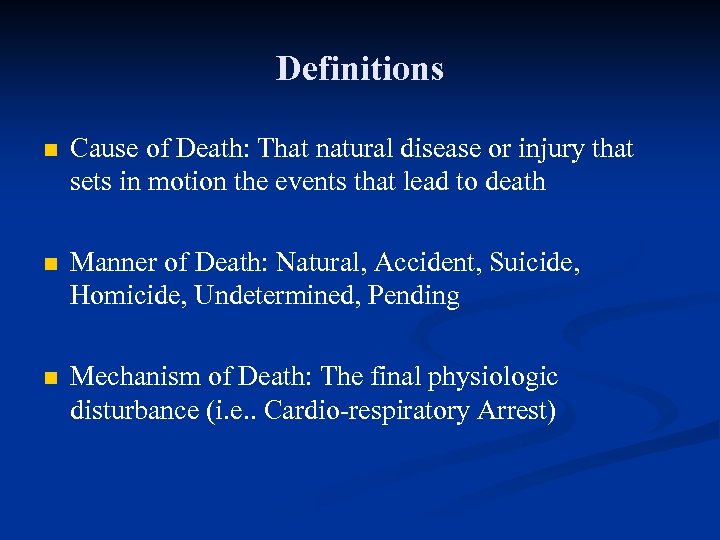 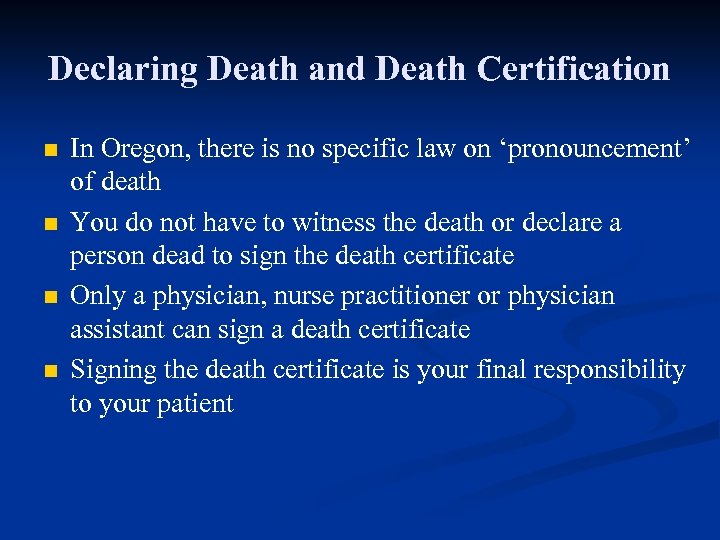 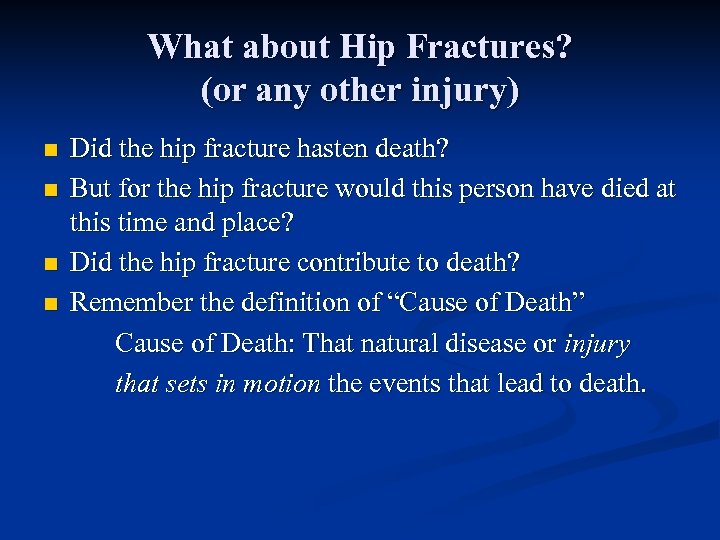 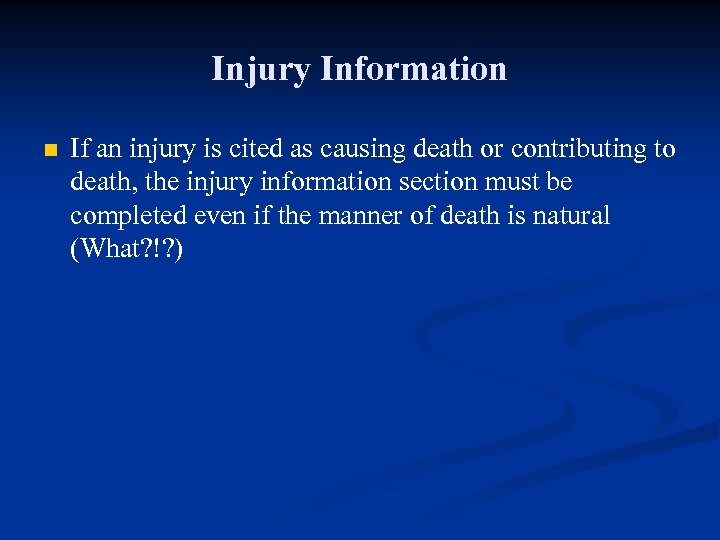 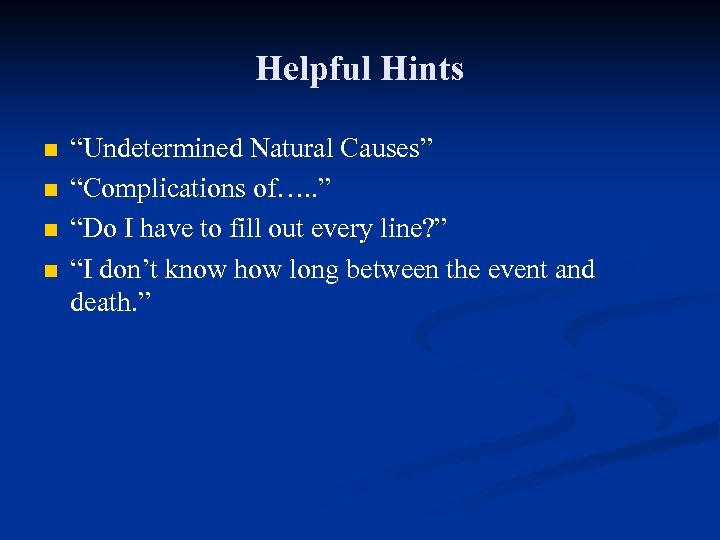 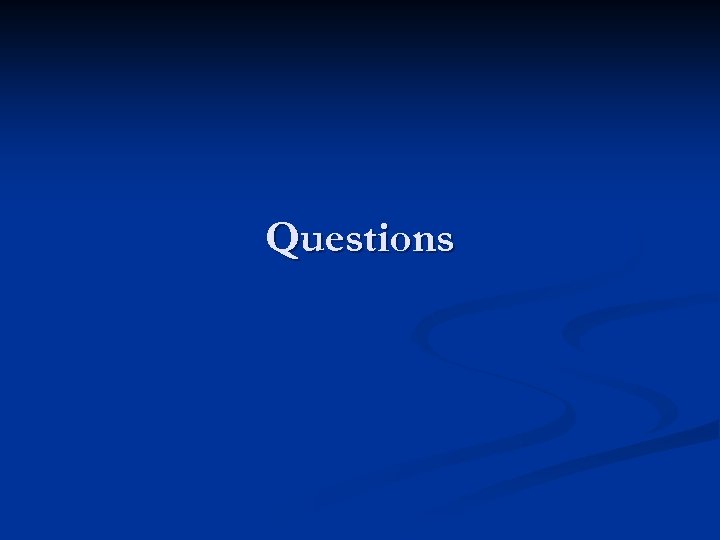 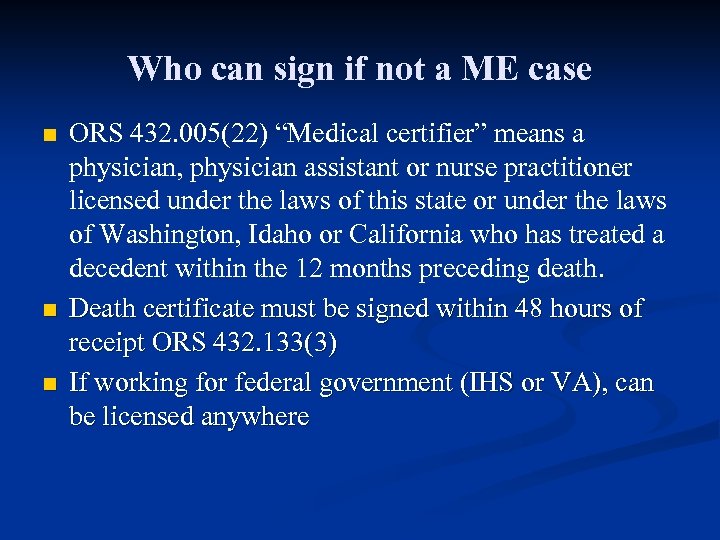 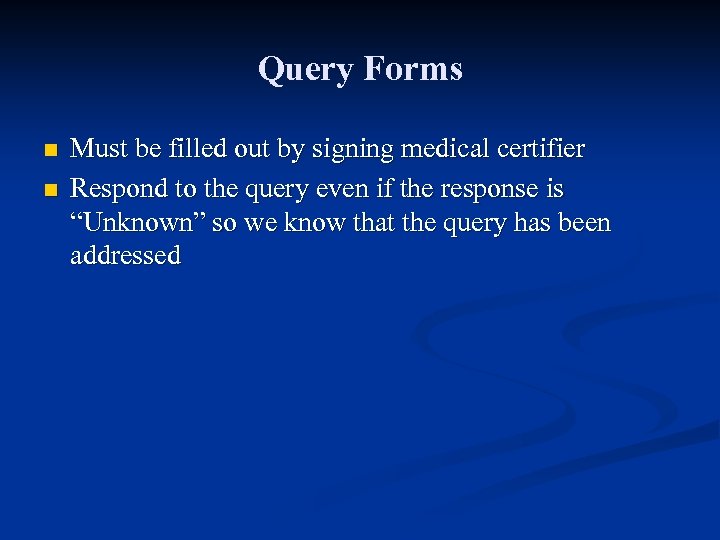 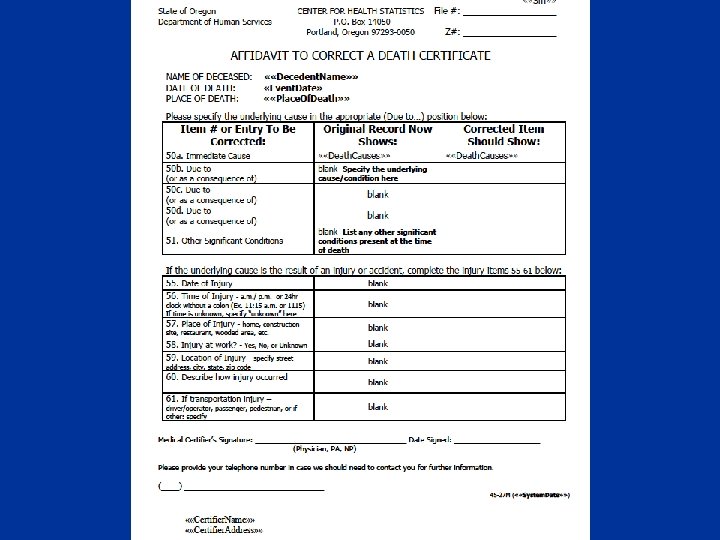 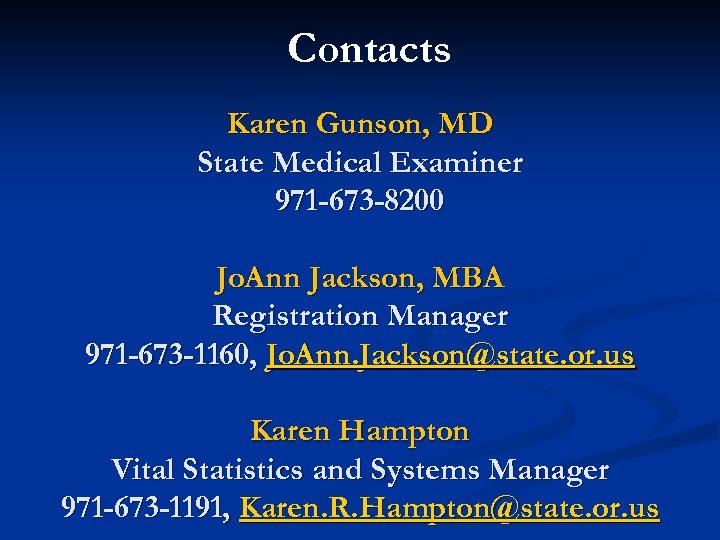 Medical Examiner Cases n n n n Apparently homicidal, suicidal or accidental Drug overdoses Deaths in custody Deaths on the job or resulting from employment Deaths occurring while not under the care of a physician in the immediate past In hospital less than 24 hours Suspicious or unusual deaths

Definitions n Cause of Death: That natural disease or injury that sets in motion the events that lead to death n Manner of Death: Natural, Accident, Suicide, Homicide, Undetermined, Pending n Mechanism of Death: The final physiologic disturbance (i. e. . Cardio-respiratory Arrest)

Injury Information n If an injury is cited as causing death or contributing to death, the injury information section must be completed even if the manner of death is natural (What? !? )

Helpful Hints n n “Undetermined Natural Causes” “Complications of…. . ” “Do I have to fill out every line? ” “I don’t know how long between the event and death. ”

Who can sign if not a ME case n n n ORS 432. 005(22) “Medical certifier” means a physician, physician assistant or nurse practitioner licensed under the laws of this state or under the laws of Washington, Idaho or California who has treated a decedent within the 12 months preceding death. Death certificate must be signed within 48 hours of receipt ORS 432. 133(3) If working for federal government (IHS or VA), can be licensed anywhere

A Brief History Of Medicine Part 3 The