Deadlines for assessment of eligibility for NHS Continuing 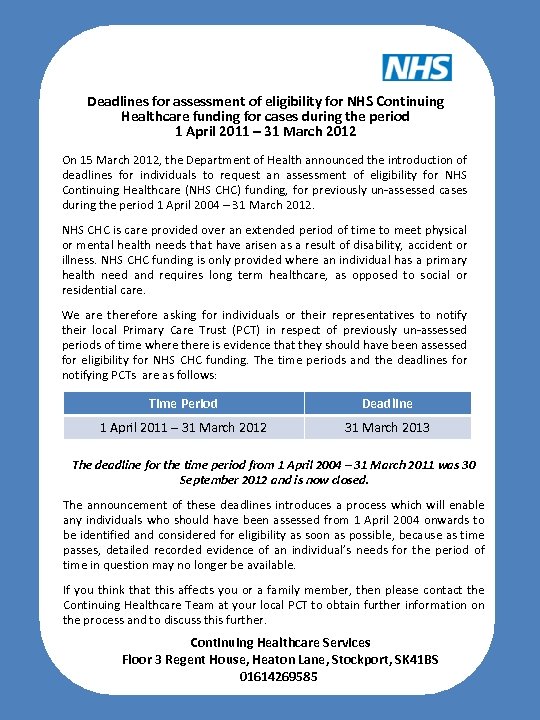 Скачать презентацию Deadlines for assessment of eligibility for NHS Continuing

Deadlines for assessment of eligibility for NHS Continuing Healthcare funding for cases during the period 1 April 2011 – 31 March 2012 On 15 March 2012, the Department of Health announced the introduction of deadlines for individuals to request an assessment of eligibility for NHS Continuing Healthcare (NHS CHC) funding, for previously un-assessed cases during the period 1 April 2004 – 31 March 2012. NHS CHC is care provided over an extended period of time to meet physical or mental health needs that have arisen as a result of disability, accident or illness. NHS CHC funding is only provided where an individual has a primary health need and requires long term healthcare, as opposed to social or residential care. We are therefore asking for individuals or their representatives to notify their local Primary Care Trust (PCT) in respect of previously un-assessed periods of time where there is evidence that they should have been assessed for eligibility for NHS CHC funding. The time periods and the deadlines for notifying PCTs are as follows: Time Period Deadline 1 April 2011 – 31 March 2012 31 March 2013 The deadline for the time period from 1 April 2004 – 31 March 2011 was 30 September 2012 and is now closed. The announcement of these deadlines introduces a process which will enable any individuals who should have been assessed from 1 April 2004 onwards to be identified and considered for eligibility as soon as possible, because as time passes, detailed recorded evidence of an individual’s needs for the period of time in question may no longer be available. If you think that this affects you or a family member, then please contact the Continuing Healthcare Team at your local PCT to obtain further information on the process and to discuss this further. Continuing Healthcare Services Floor 3 Regent House, Heaton Lane, Stockport, SK 41 BS 01614269585