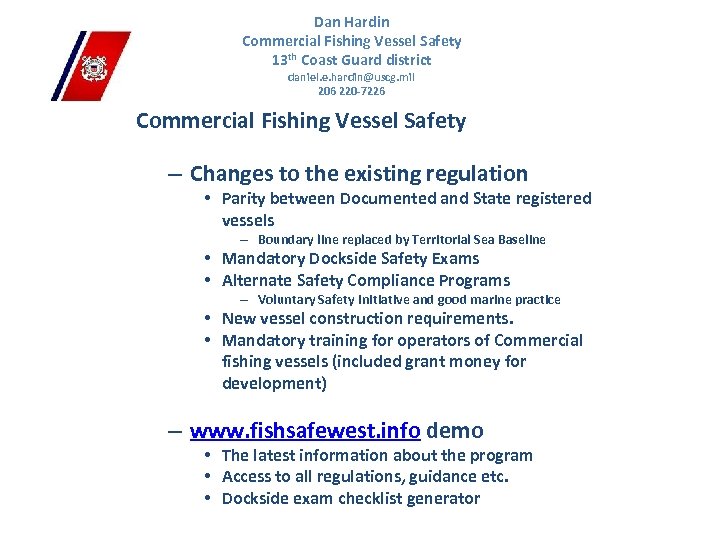 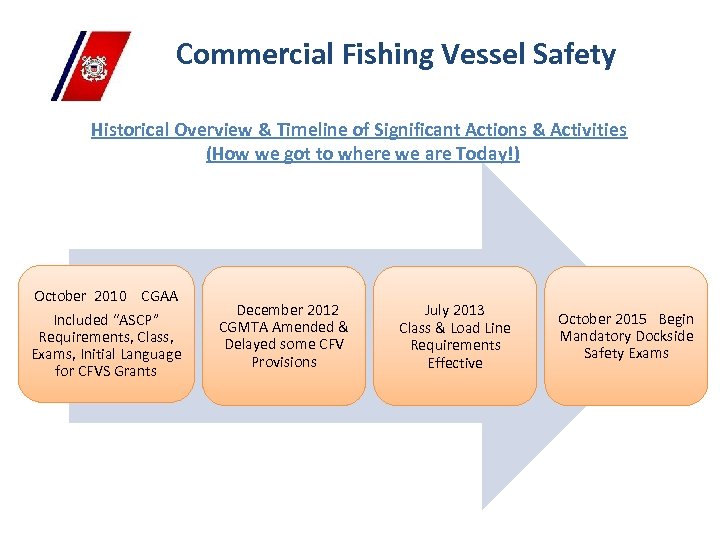 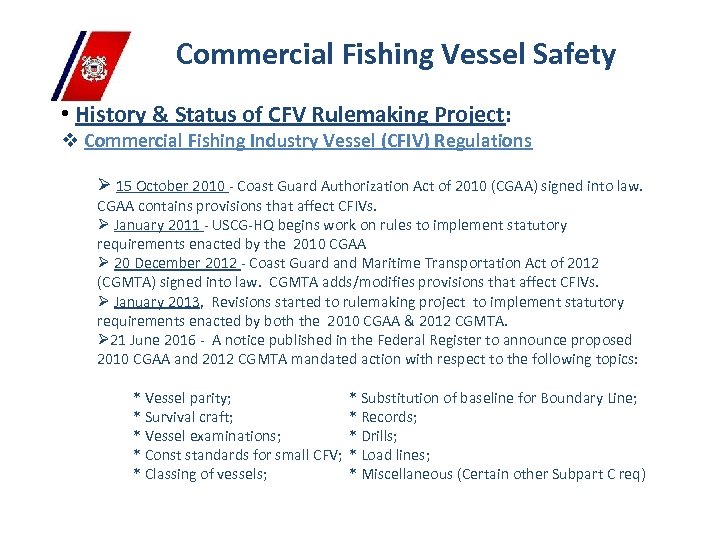 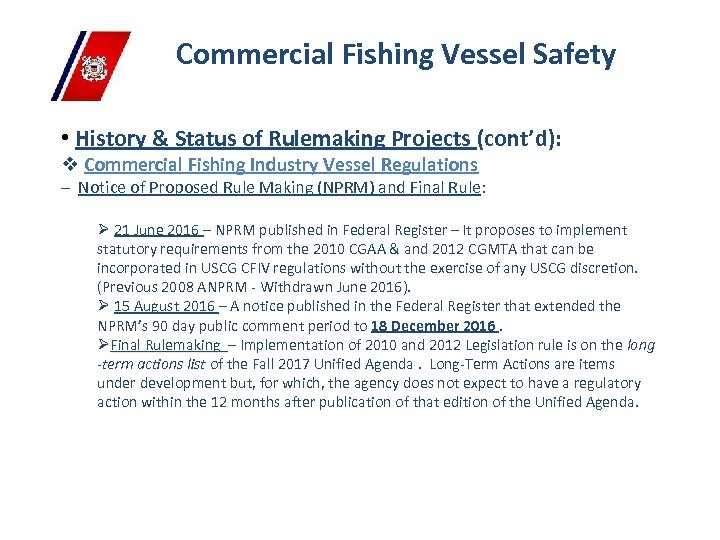 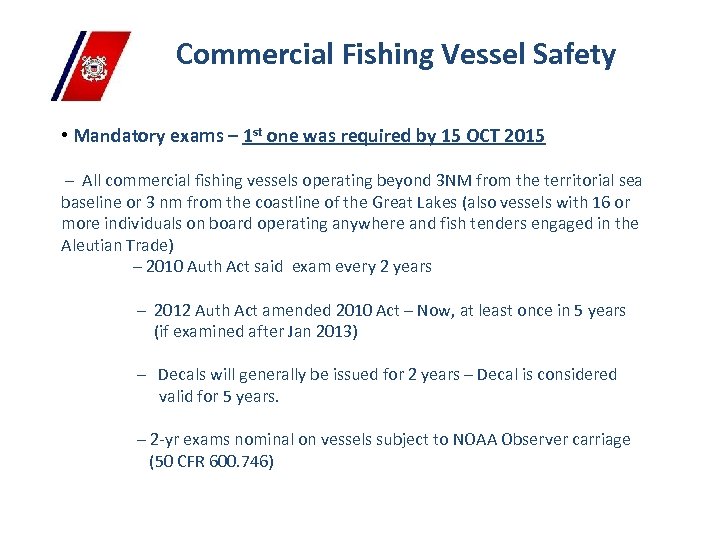 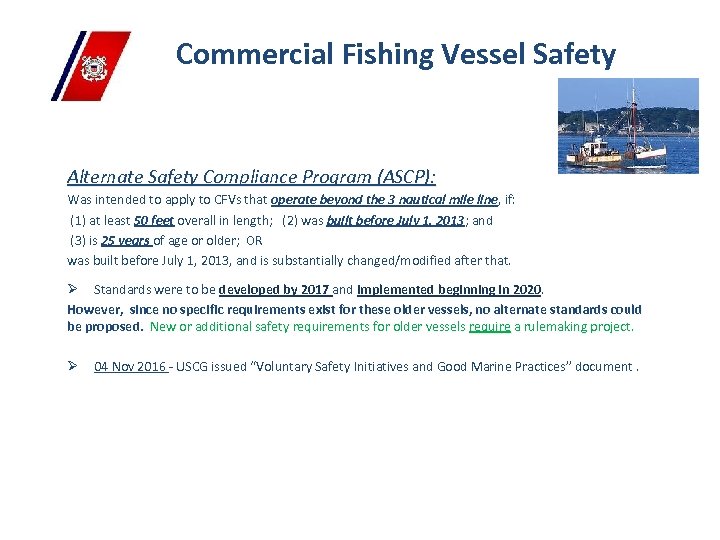 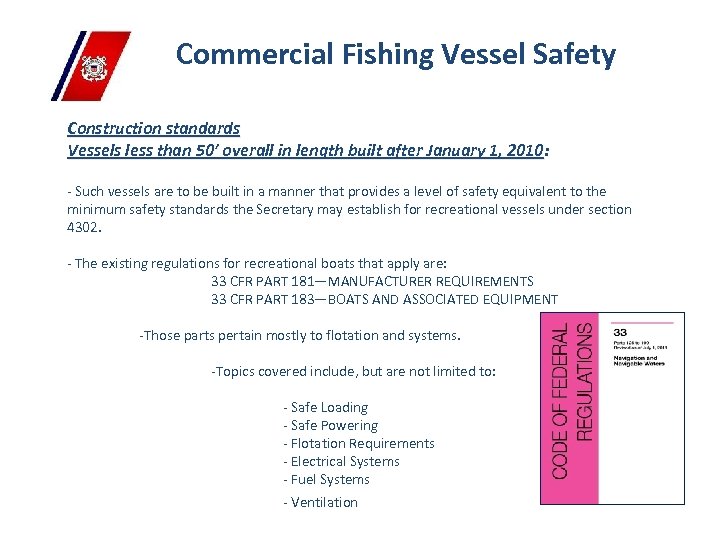 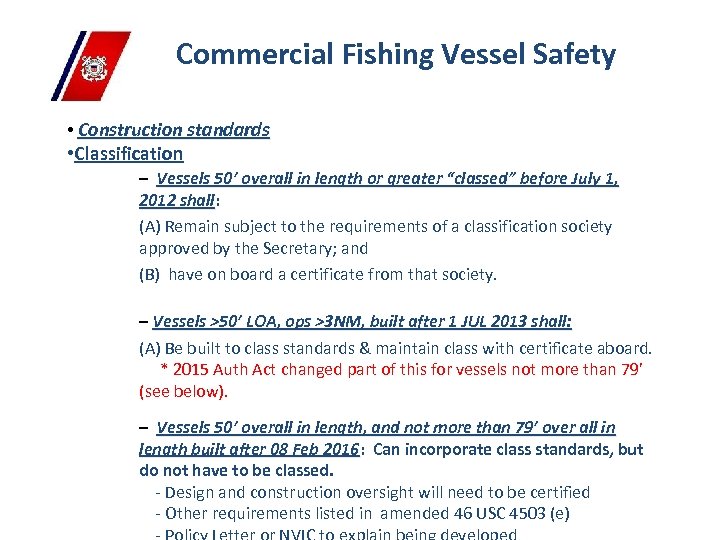 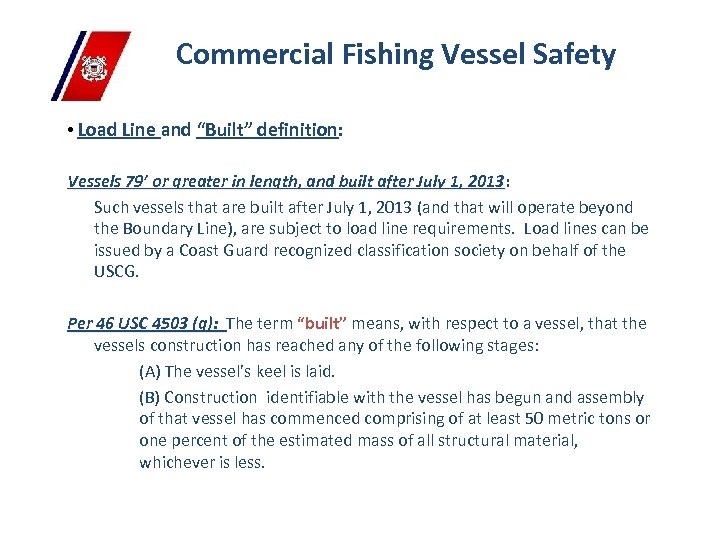 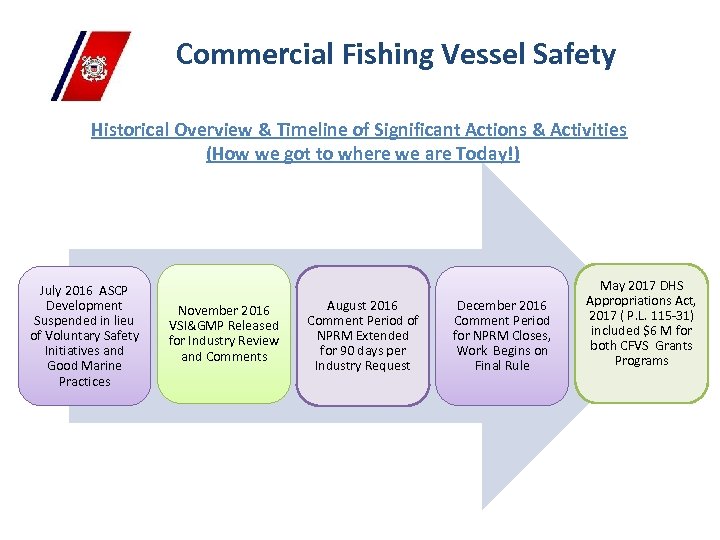 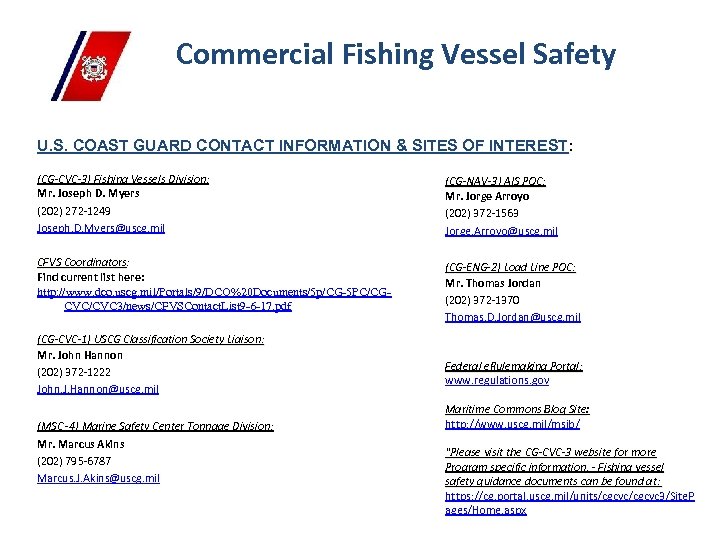 Commercial Fishing Vessel Safety • History & Status of Rulemaking Projects (cont’d): v Commercial Fishing Industry Vessel Regulations – Notice of Proposed Rule Making (NPRM) and Final Rule: Ø 21 June 2016 – NPRM published in Federal Register – It proposes to implement statutory requirements from the 2010 CGAA & and 2012 CGMTA that can be incorporated in USCG CFIV regulations without the exercise of any USCG discretion. (Previous 2008 ANPRM - Withdrawn June 2016). Ø 15 August 2016 – A notice published in the Federal Register that extended the NPRM’s 90 day public comment period to 18 December 2016. ØFinal Rulemaking – Implementation of 2010 and 2012 Legislation rule is on the long Rulemaking -term actions list of the Fall 2017 Unified Agenda. Long-Term Actions are items under development but, for which, the agency does not expect to have a regulatory action within the 12 months after publication of that edition of the Unified Agenda.

Commercial Fishing Vessel Safety • Mandatory exams – 1 st one was required by 15 OCT 2015 – All commercial fishing vessels operating beyond 3 NM from the territorial sea baseline or 3 nm from the coastline of the Great Lakes (also vessels with 16 or more individuals on board operating anywhere and fish tenders engaged in the operating anywhere Aleutian Trade) – 2010 Auth Act said exam every 2 years – 2012 Auth Act amended 2010 Act – Now, at least once in 5 years (if examined after Jan 2013) – Decals will generally be issued for 2 years – Decal is considered valid for 5 years. – 2 -yr exams nominal on vessels subject to NOAA Observer carriage (50 CFR 600. 746)

Commercial Fishing Vessel Safety Alternate Safety Compliance Program (ASCP): Was intended to apply to CFVs that operate beyond the 3 nautical mile line, if: (1) at least 50 feet overall in length; (2) was built before July 1, 2013; and (3) is 25 years of age or older; OR was built before July 1, 2013, and is substantially changed/modified after that. Ø Standards were to be developed by 2017 and implemented beginning in 2020. However, since no specific requirements exist for these older vessels, no alternate standards could be proposed. New or additional safety requirements for older vessels require a rulemaking project. Ø 04 Nov 2016 - USCG issued “Voluntary Safety Initiatives and Good Marine Practices” document.

Commercial Fishing Vessel Safety Construction standards Vessels less than 50’ overall in length built after January 1, 2010: - Such vessels are to be built in a manner that provides a level of safety equivalent to the minimum safety standards the Secretary may establish for recreational vessels under section 4302. - The existing regulations for recreational boats that apply are: 33 CFR PART 181—MANUFACTURER REQUIREMENTS 33 CFR PART 183—BOATS AND ASSOCIATED EQUIPMENT -Those parts pertain mostly to flotation and systems. -Topics covered include, but are not limited to: - Safe Loading - Safe Powering - Flotation Requirements - Electrical Systems - Fuel Systems - Ventilation

Commercial Fishing Vessel Safety • Construction standards • Classification – Vessels 50’ overall in length or greater “classed” before July 1, 2012 shall: shall (A) Remain subject to the requirements of a classification society approved by the Secretary; and (B) have on board a certificate from that society. – Vessels >50’ LOA, ops >3 NM, built after 1 JUL 2013 shall: (A) Be built to class standards & maintain class with certificate aboard. * 2015 Auth Act changed part of this for vessels not more than 79’ (see below). – Vessels 50’ overall in length, and not more than 79’ over all in length built after 08 Feb 2016: Can incorporate class standards, but 2016 do not have to be classed. - Design and construction oversight will need to be certified - Other requirements listed in amended 46 USC 4503 (e)

Commercial Fishing Vessel Safety • Load Line and “Built” definition: Vessels 79’ or greater in length, and built after July 1, 2013: 2013 Such vessels that are built after July 1, 2013 (and that will operate beyond the Boundary Line), are subject to load line requirements. Load lines can be issued by a Coast Guard recognized classification society on behalf of the USCG. Per 46 USC 4503 (g): The term “built” means, with respect to a vessel, that the vessels construction has reached any of the following stages: (A) The vessel’s keel is laid. (B) Construction identifiable with the vessel has begun and assembly of that vessel has commenced comprising of at least 50 metric tons or one percent of the estimated mass of all structural material, whichever is less.

Arrival at the port. Pilotage. Prior to