Cultural relativism when in Rome do as a 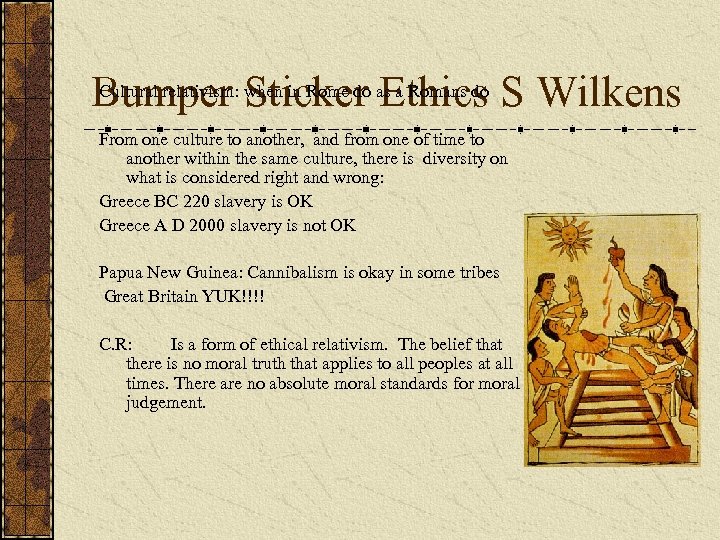 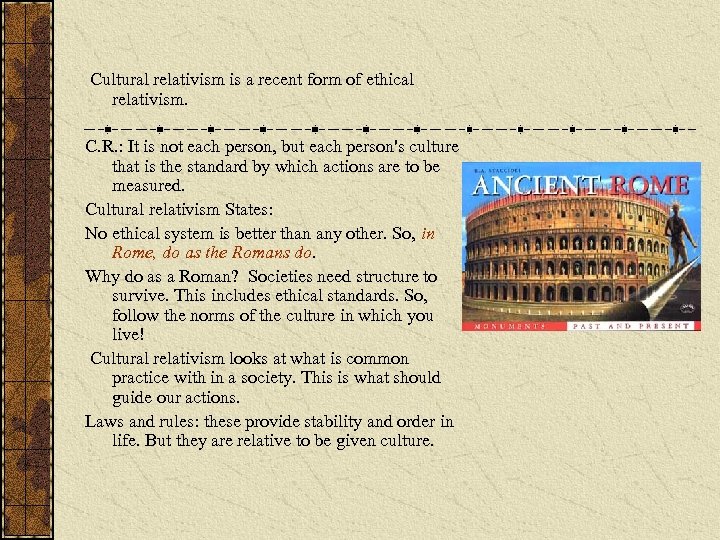 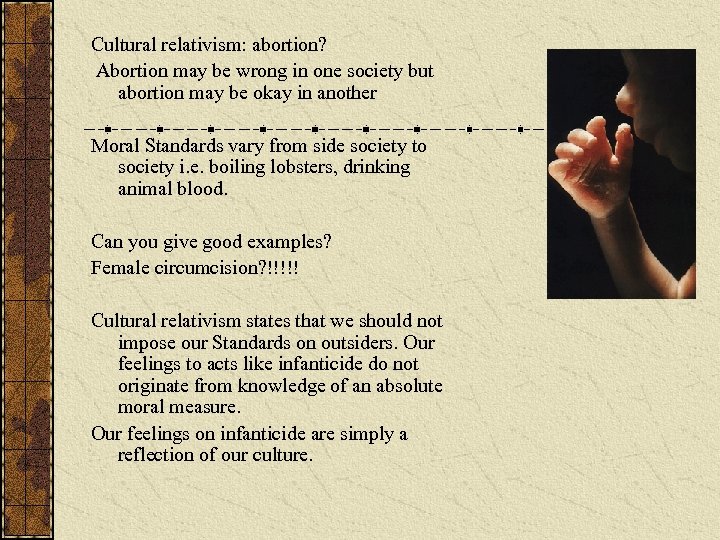 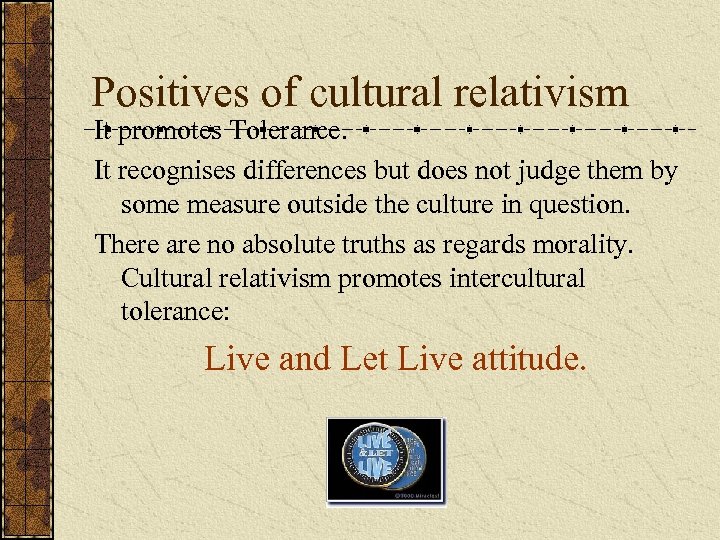 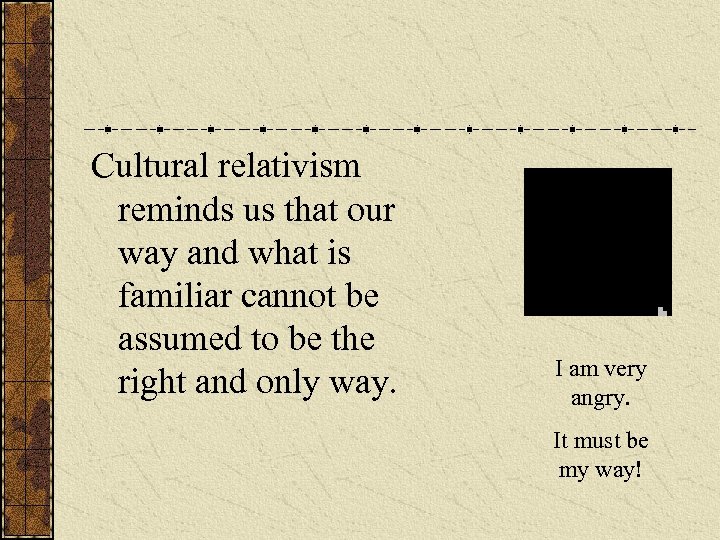 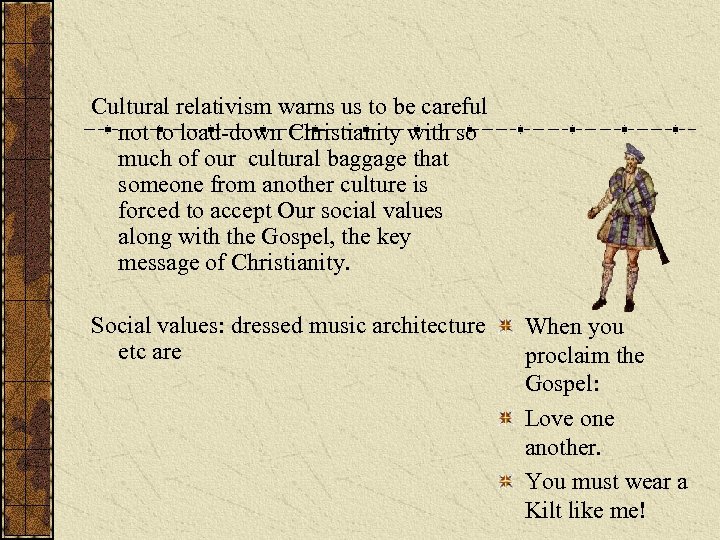 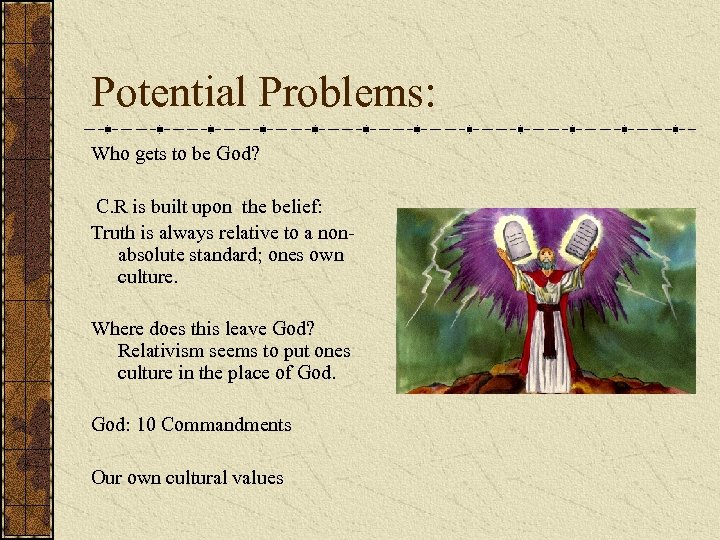 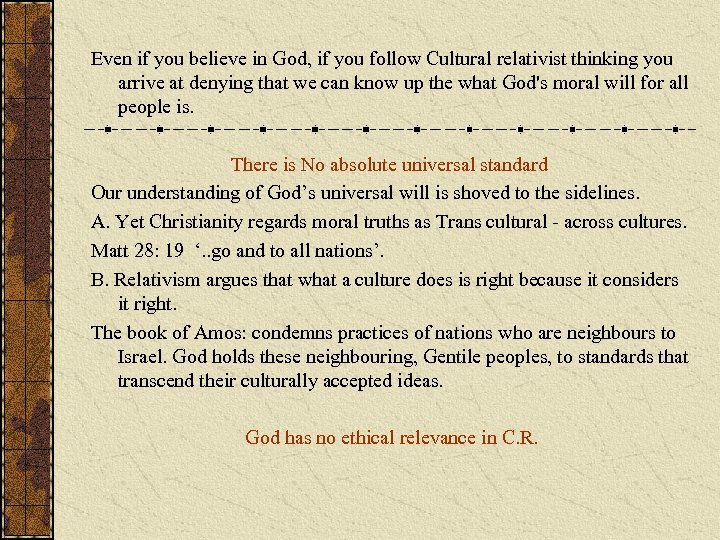 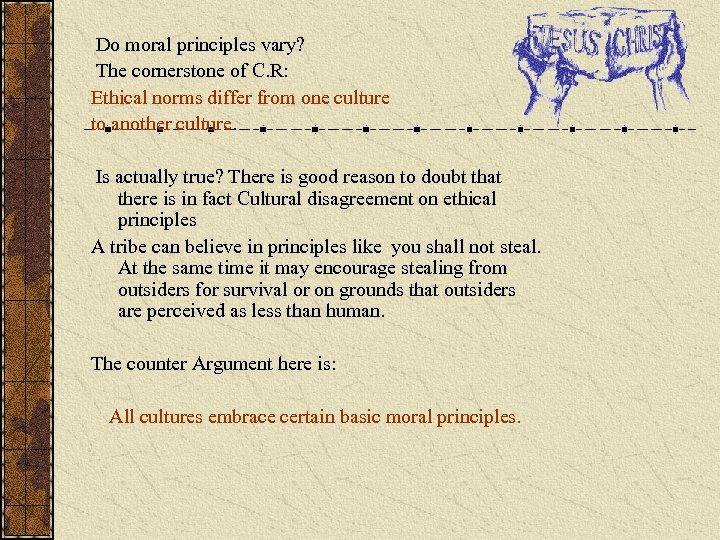 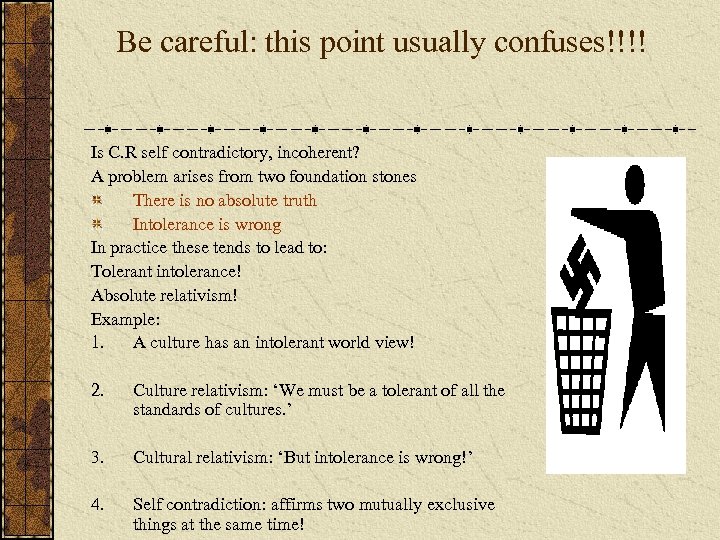 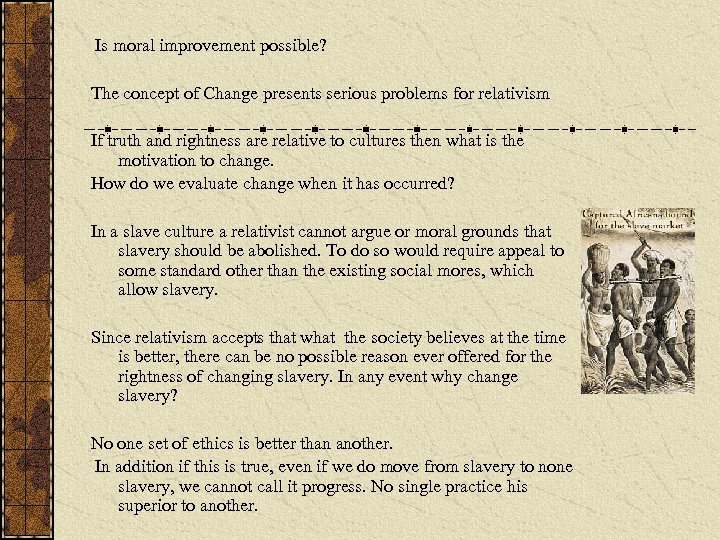 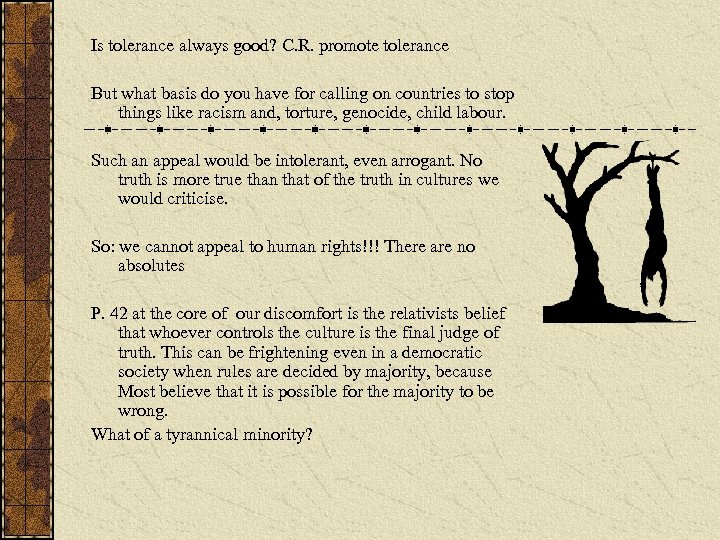 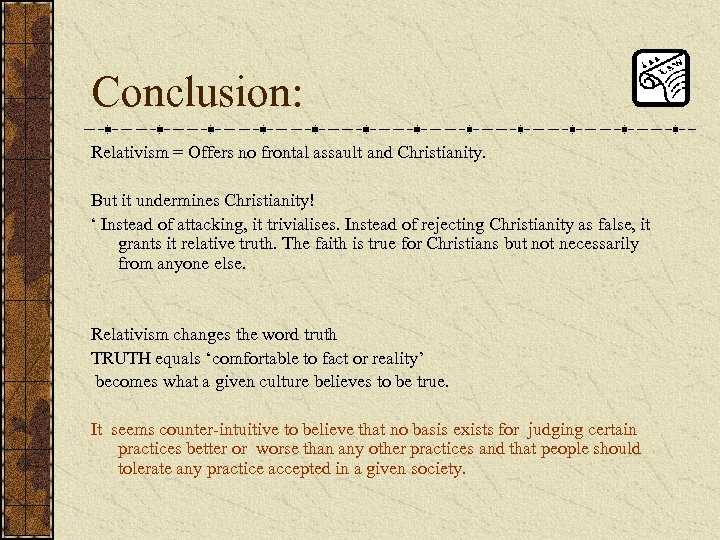 Скачать презентацию Cultural relativism when in Rome do as a

Cultural relativism: when in Rome do as a Romans do Bumper Sticker Ethics S Wilkens From one culture to another, and from one of time to another within the same culture, there is diversity on what is considered right and wrong: Greece BC 220 slavery is OK Greece A D 2000 slavery is not OK Papua New Guinea: Cannibalism is okay in some tribes Great Britain YUK!!!! C. R: Is a form of ethical relativism. The belief that there is no moral truth that applies to all peoples at all times. There are no absolute moral standards for moral judgement.

Cultural relativism is a recent form of ethical relativism. C. R. : It is not each person, but each person's culture that is the standard by which actions are to be measured. Cultural relativism States: No ethical system is better than any other. So, in Rome, do as the Romans do. Why do as a Roman? Societies need structure to survive. This includes ethical standards. So, follow the norms of the culture in which you live! Cultural relativism looks at what is common practice with in a society. This is what should guide our actions. Laws and rules: these provide stability and order in life. But they are relative to be given culture.

Cultural relativism: abortion? Abortion may be wrong in one society but abortion may be okay in another Moral Standards vary from side society to society i. e. boiling lobsters, drinking animal blood. Can you give good examples? Female circumcision? !!!!! Cultural relativism states that we should not impose our Standards on outsiders. Our feelings to acts like infanticide do not originate from knowledge of an absolute moral measure. Our feelings on infanticide are simply a reflection of our culture.

Positives of cultural relativism It promotes Tolerance. It recognises differences but does not judge them by some measure outside the culture in question. There are no absolute truths as regards morality. Cultural relativism promotes intercultural tolerance: Live and Let Live attitude.

Cultural relativism reminds us that our way and what is familiar cannot be assumed to be the right and only way. I am very angry. It must be my way!

Cultural relativism warns us to be careful not to load-down Christianity with so much of our cultural baggage that someone from another culture is forced to accept Our social values along with the Gospel, the key message of Christianity. Social values: dressed music architecture etc are When you proclaim the Gospel: Love one another. You must wear a Kilt like me!

Potential Problems: Who gets to be God? C. R is built upon the belief: Truth is always relative to a non- absolute standard; ones own culture. Where does this leave God? Relativism seems to put ones culture in the place of God: 10 Commandments Our own cultural values

Even if you believe in God, if you follow Cultural relativist thinking you arrive at denying that we can know up the what God's moral will for all people is. There is No absolute universal standard Our understanding of God’s universal will is shoved to the sidelines. A. Yet Christianity regards moral truths as Trans cultural - across cultures. Matt 28: 19 ‘. . go and to all nations’. B. Relativism argues that what a culture does is right because it considers it right. The book of Amos: condemns practices of nations who are neighbours to Israel. God holds these neighbouring, Gentile peoples, to standards that transcend their culturally accepted ideas. God has no ethical relevance in C. R.

Do moral principles vary? The cornerstone of C. R: Ethical norms differ from one culture to another culture. Is actually true? There is good reason to doubt that there is in fact Cultural disagreement on ethical principles A tribe can believe in principles like you shall not steal. At the same time it may encourage stealing from outsiders for survival or on grounds that outsiders are perceived as less than human. The counter Argument here is: All cultures embrace certain basic moral principles.

Be careful: this point usually confuses!!!! Is C. R self contradictory, incoherent? A problem arises from two foundation stones There is no absolute truth Intolerance is wrong In practice these tends to lead to: Tolerant intolerance! Absolute relativism! Example: 1. A culture has an intolerant world view! 2. 3. 4. Culture relativism: ‘We must be a tolerant of all the standards of cultures. ’ Cultural relativism: ‘But intolerance is wrong!’ Self contradiction: affirms two mutually exclusive things at the same time!

Is moral improvement possible? The concept of Change presents serious problems for relativism If truth and rightness are relative to cultures then what is the motivation to change. How do we evaluate change when it has occurred? In a slave culture a relativist cannot argue or moral grounds that slavery should be abolished. To do so would require appeal to some standard other than the existing social mores, which allow slavery. Since relativism accepts that what the society believes at the time is better, there can be no possible reason ever offered for the rightness of changing slavery. In any event why change slavery? No one set of ethics is better than another. In addition if this is true, even if we do move from slavery to none slavery, we cannot call it progress. No single practice his superior to another.

Is tolerance always good? C. R. promote tolerance But what basis do you have for calling on countries to stop things like racism and, torture, genocide, child labour. Such an appeal would be intolerant, even arrogant. No truth is more true than that of the truth in cultures we would criticise. So: we cannot appeal to human rights!!! There are no absolutes P. 42 at the core of our discomfort is the relativists belief that whoever controls the culture is the final judge of truth. This can be frightening even in a democratic society when rules are decided by majority, because Most believe that it is possible for the majority to be wrong. What of a tyrannical minority?

Conclusion: Relativism = Offers no frontal assault and Christianity. But it undermines Christianity! ‘ Instead of attacking, it trivialises. Instead of rejecting Christianity as false, it grants it relative truth. The faith is true for Christians but not necessarily from anyone else. Relativism changes the word truth TRUTH equals ‘comfortable to fact or reality’ becomes what a given culture believes to be true. It seems counter-intuitive to believe that no basis exists for judging certain practices better or worse than any other practices and that people should tolerate any practice accepted in a given society.

ROME ITALY Legend of the founding