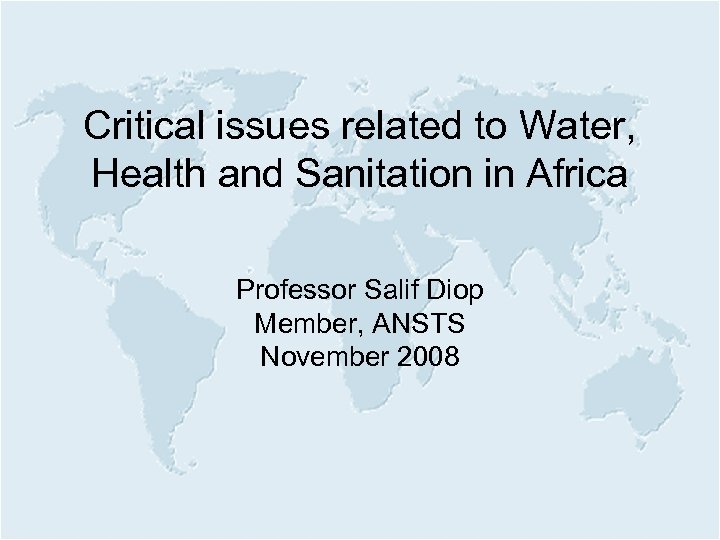 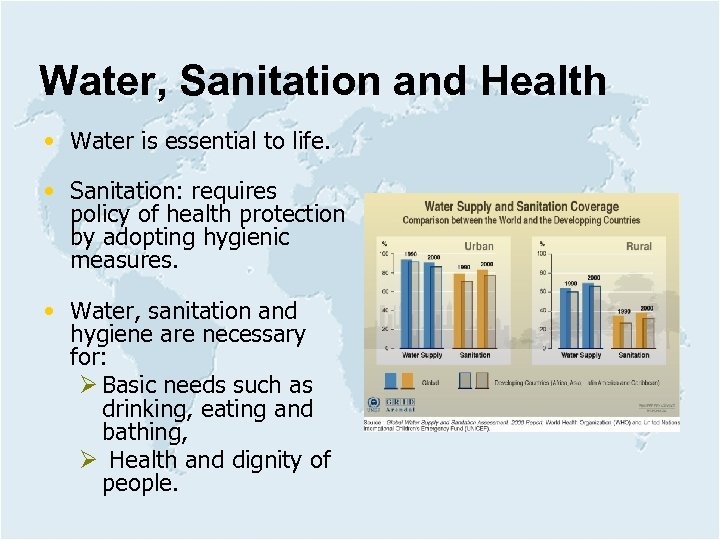 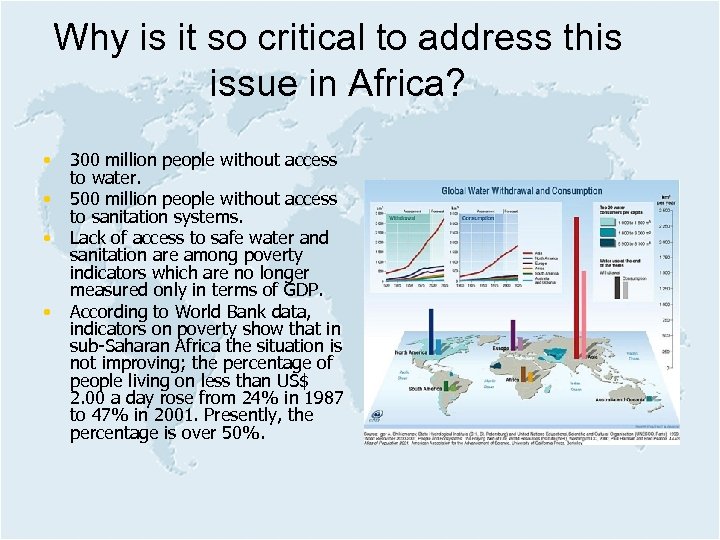 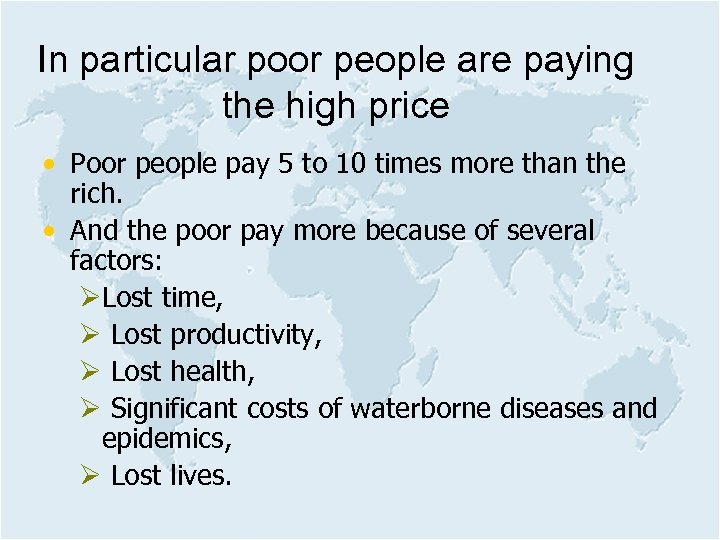 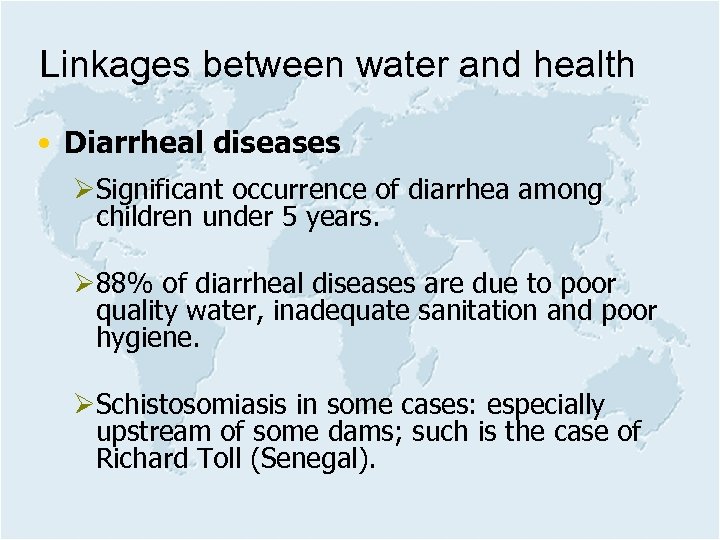 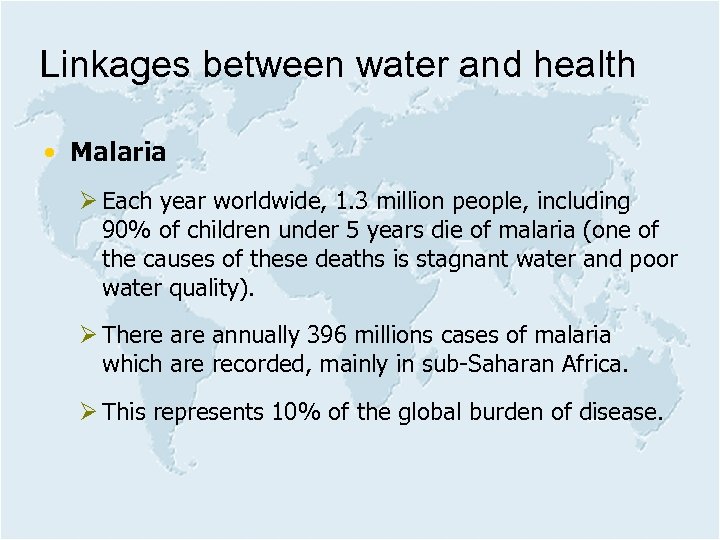 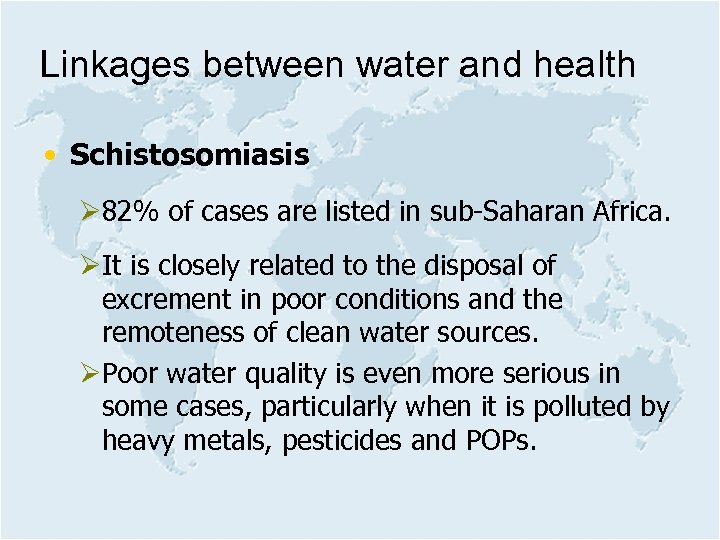 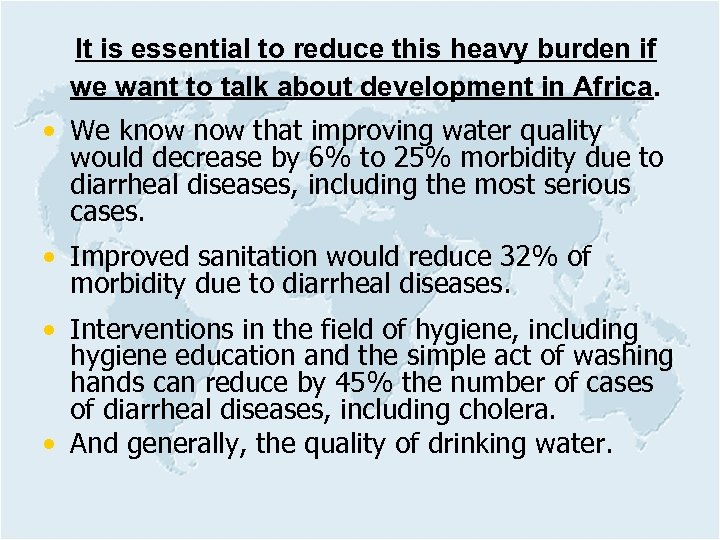 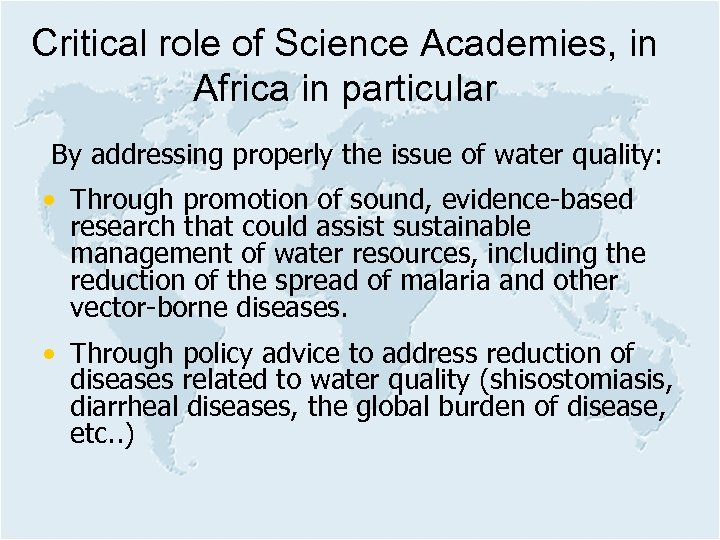 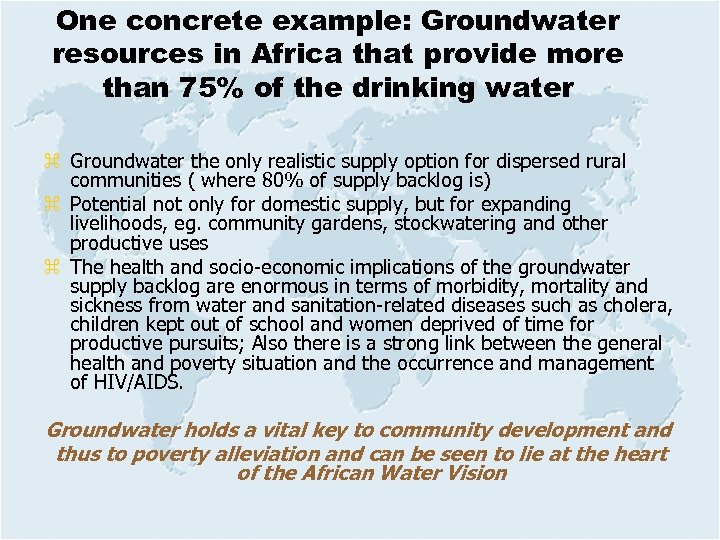 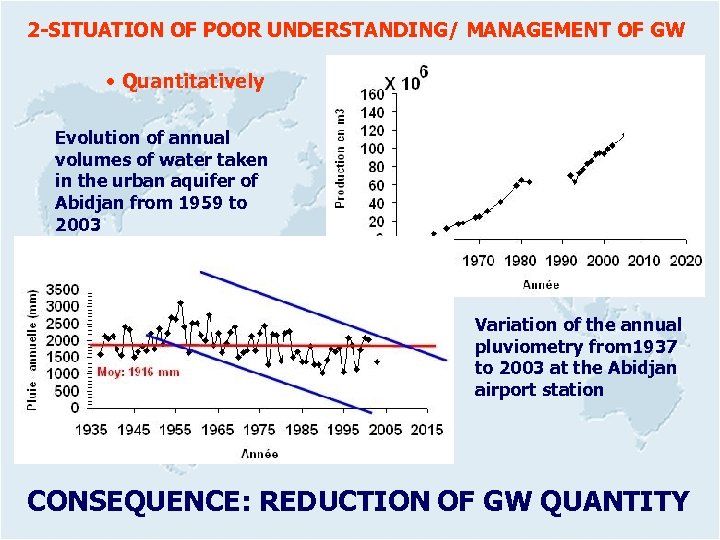 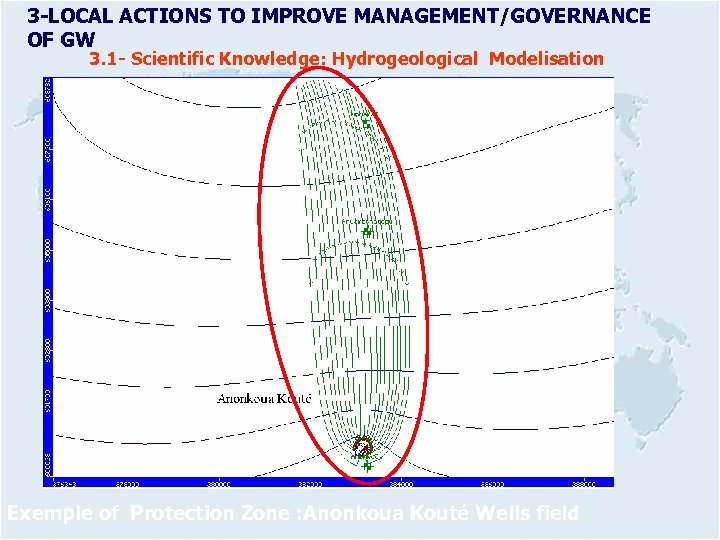 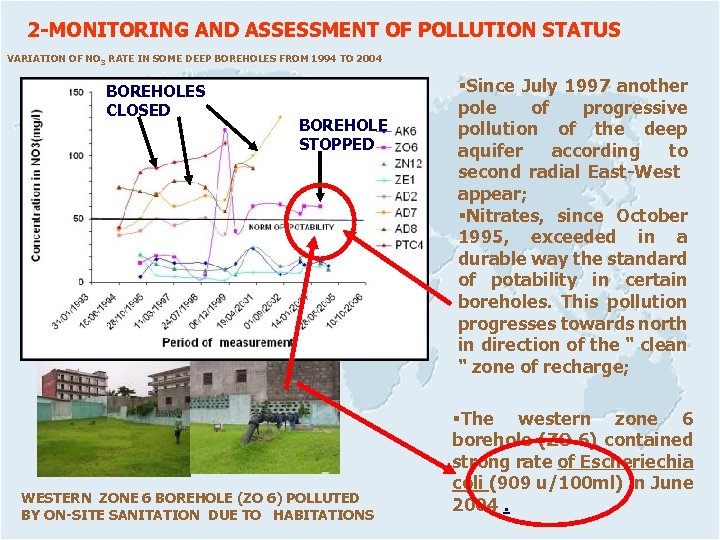 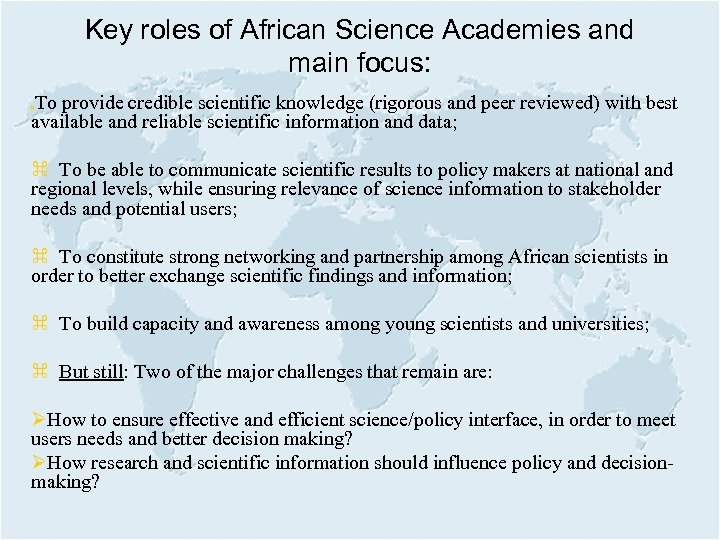 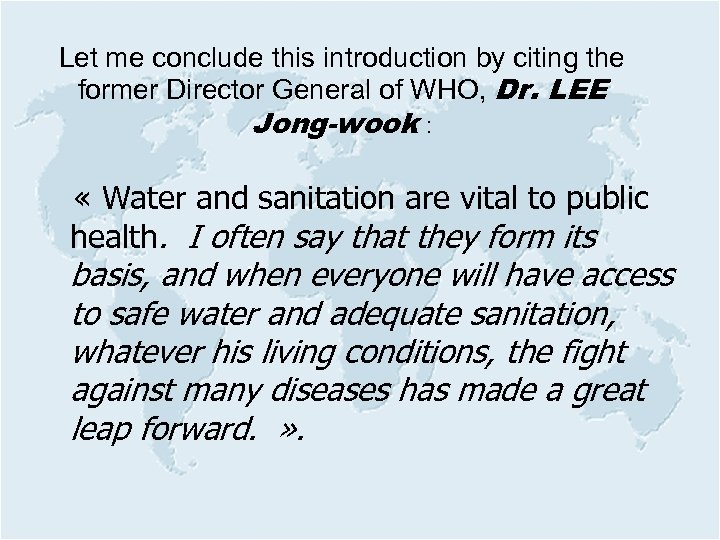 Water, Sanitation and Health • Water is essential to life. • Sanitation: requires policy of health protection by adopting hygienic measures. • Water, sanitation and hygiene are necessary for: Ø Basic needs such as drinking, eating and bathing, Ø Health and dignity of people.

Why is it so critical to address this issue in Africa? • • 300 million people without access to water. 500 million people without access to sanitation systems. Lack of access to safe water and sanitation are among poverty indicators which are no longer measured only in terms of GDP. According to World Bank data, indicators on poverty show that in sub-Saharan Africa the situation is not improving; the percentage of people living on less than US$ 2. 00 a day rose from 24% in 1987 to 47% in 2001. Presently, the percentage is over 50%.

Linkages between water and health • Diarrheal diseases ØSignificant occurrence of diarrhea among children under 5 years. Ø 88% of diarrheal diseases are due to poor quality water, inadequate sanitation and poor hygiene. ØSchistosomiasis in some cases: especially upstream of some dams; such is the case of Richard Toll (Senegal).

Linkages between water and health • Malaria Ø Each year worldwide, 1. 3 million people, including 90% of children under 5 years die of malaria (one of the causes of these deaths is stagnant water and poor water quality). Ø There annually 396 millions cases of malaria which are recorded, mainly in sub-Saharan Africa. Ø This represents 10% of the global burden of disease.

Linkages between water and health • Schistosomiasis Ø 82% of cases are listed in sub-Saharan Africa. ØIt is closely related to the disposal of excrement in poor conditions and the remoteness of clean water sources. ØPoor water quality is even more serious in some cases, particularly when it is polluted by heavy metals, pesticides and POPs.

Critical role of Science Academies, in Africa in particular By addressing properly the issue of water quality: • Through promotion of sound, evidence-based research that could assist sustainable management of water resources, including the reduction of the spread of malaria and other vector-borne diseases. • Through policy advice to address reduction of diseases related to water quality (shisostomiasis, diarrheal diseases, the global burden of disease, etc. . )

One concrete example: Groundwater resources in Africa that provide more than 75% of the drinking water z Groundwater the only realistic supply option for dispersed rural communities ( where 80% of supply backlog is) z Potential not only for domestic supply, but for expanding livelihoods, eg. community gardens, stockwatering and other productive uses z The health and socio-economic implications of the groundwater supply backlog are enormous in terms of morbidity, mortality and sickness from water and sanitation-related diseases such as cholera, children kept out of school and women deprived of time for productive pursuits; Also there is a strong link between the general health and poverty situation and the occurrence and management of HIV/AIDS. Groundwater holds a vital key to community development and thus to poverty alleviation and can be seen to lie at the heart of the African Water Vision

2 -SITUATION OF POOR UNDERSTANDING/ MANAGEMENT OF GW • Quantitatively Evolution of annual volumes of water taken in the urban aquifer of Abidjan from 1959 to 2003 Variation of the annual pluviometry from 1937 to 2003 at the Abidjan airport station CONSEQUENCE: REDUCTION OF GW QUANTITY

2 -MONITORING AND ASSESSMENT OF POLLUTION STATUS VARIATION OF NO 3 RATE IN SOME DEEP BOREHOLES FROM 1994 TO 2004 BOREHOLES CLOSED BOREHOLE STOPPED WESTERN ZONE 6 BOREHOLE (ZO 6) POLLUTED BY ON-SITE SANITATION DUE TO HABITATIONS §Since July 1997 another pole of progressive pollution of the deep aquifer according to second radial East-West appear; §Nitrates, since October 1995, exceeded in a durable way the standard of potability in certain boreholes. This pollution progresses towards north in direction of the " clean " zone of recharge; §The western zone 6 borehole (ZO 6) contained strong rate of Escheriechia coli (909 u/100 ml) in June 2004.

Key roles of African Science Academies and main focus: To provide credible scientific knowledge (rigorous and peer reviewed) with best available and reliable scientific information and data; z z To be able to communicate scientific results to policy makers at national and regional levels, while ensuring relevance of science information to stakeholder needs and potential users; z To constitute strong networking and partnership among African scientists in order to better exchange scientific findings and information; z To build capacity and awareness among young scientists and universities; z But still: Two of the major challenges that remain are: ØHow to ensure effective and efficient science/policy interface, in order to meet users needs and better decision making? ØHow research and scientific information should influence policy and decisionmaking?

Let me conclude this introduction by citing the former Director General of WHO, Dr. LEE Jong-wook : « Water and sanitation are vital to public health. I often say that they form its basis, and when everyone will have access to safe water and adequate sanitation, whatever his living conditions, the fight against many diseases has made a great leap forward. » .