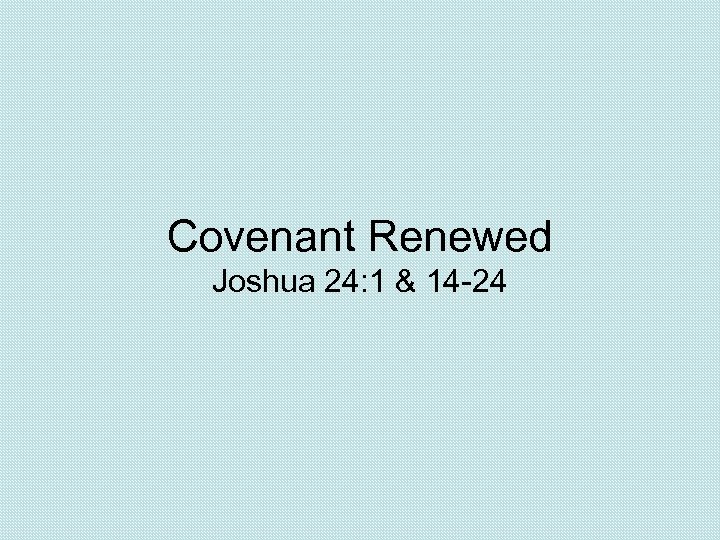 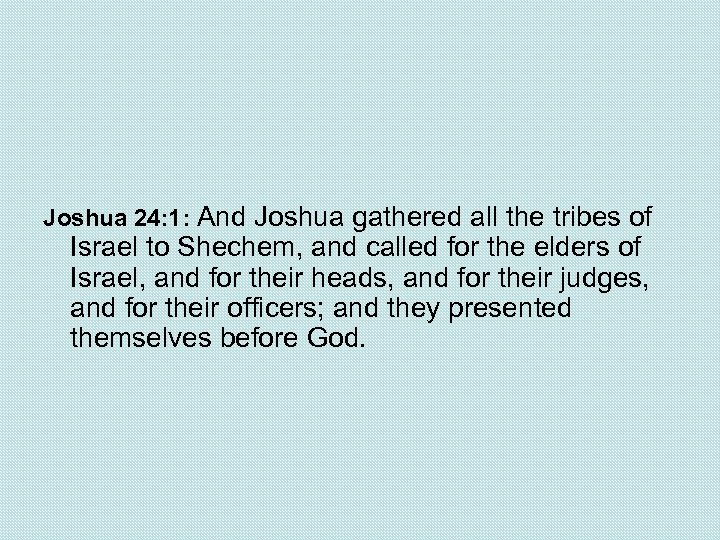 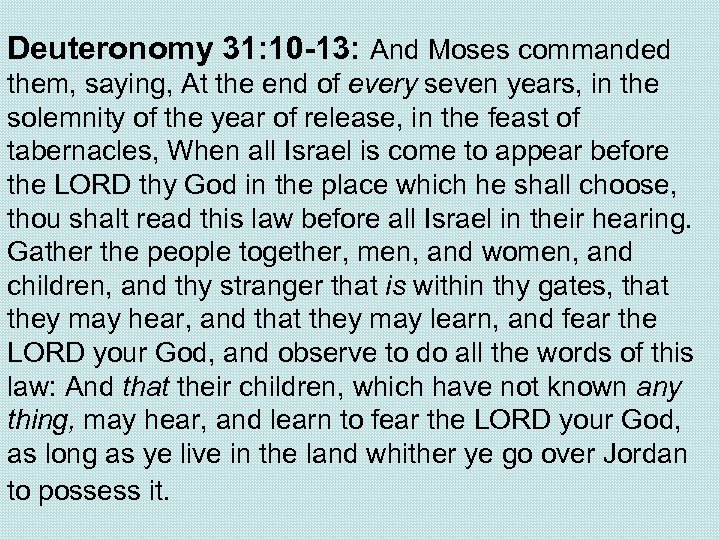 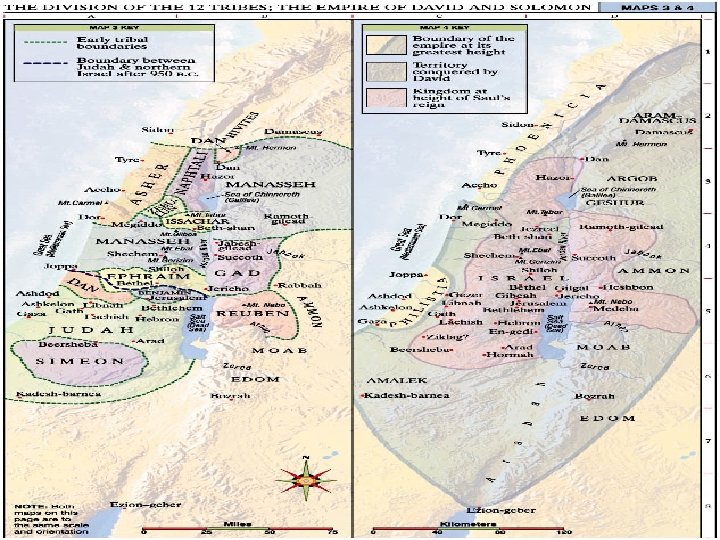 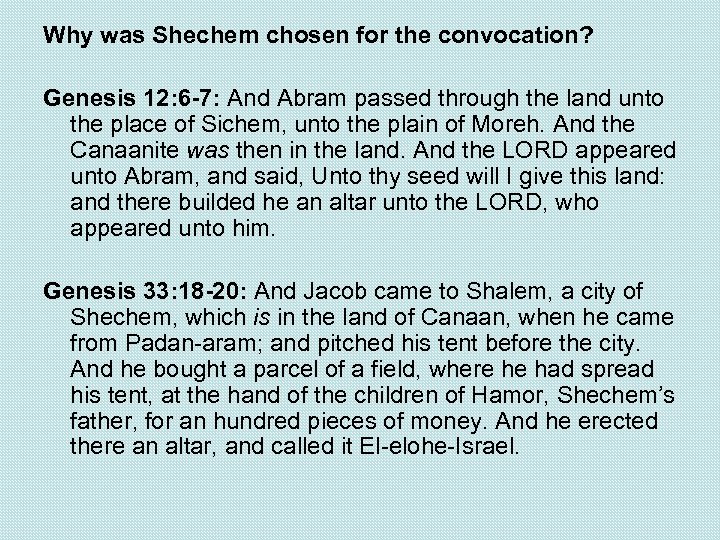 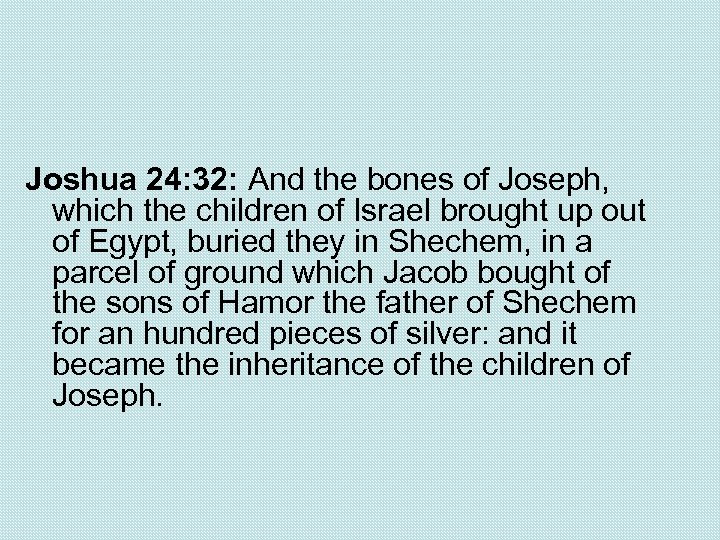 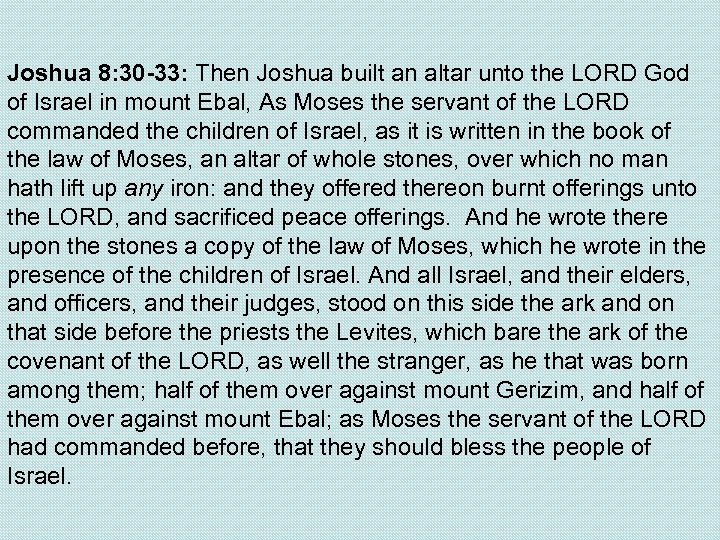 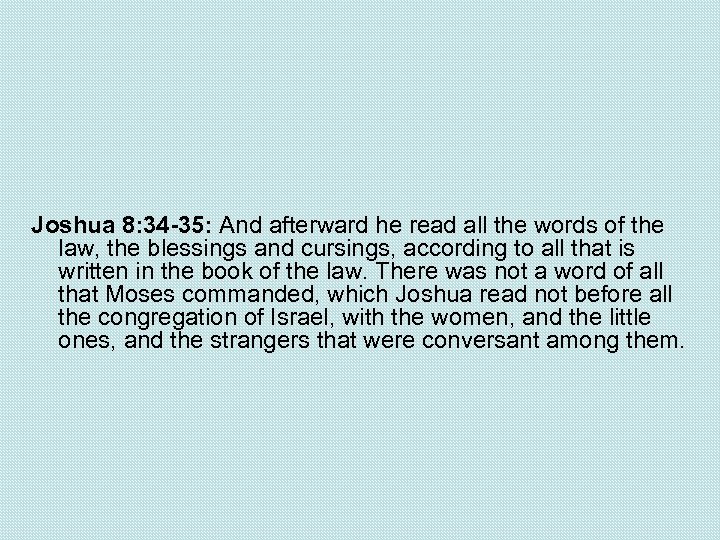 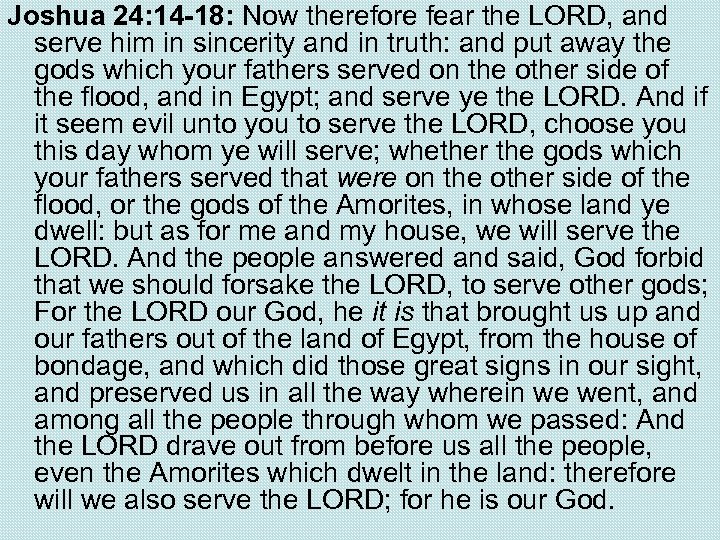 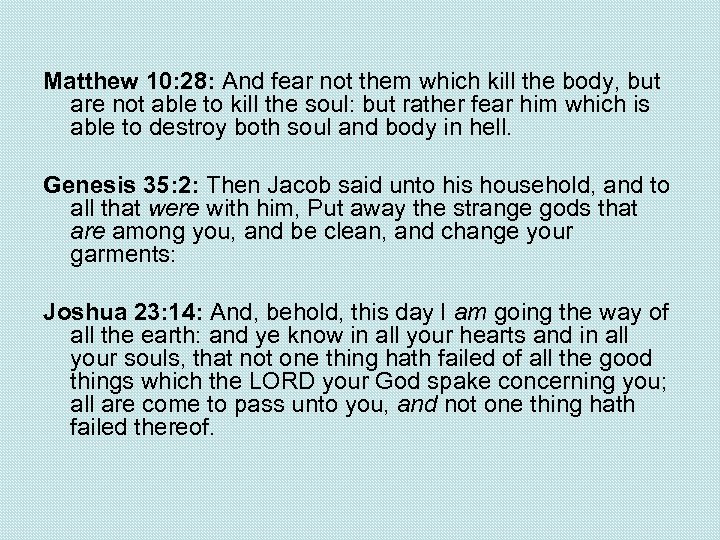 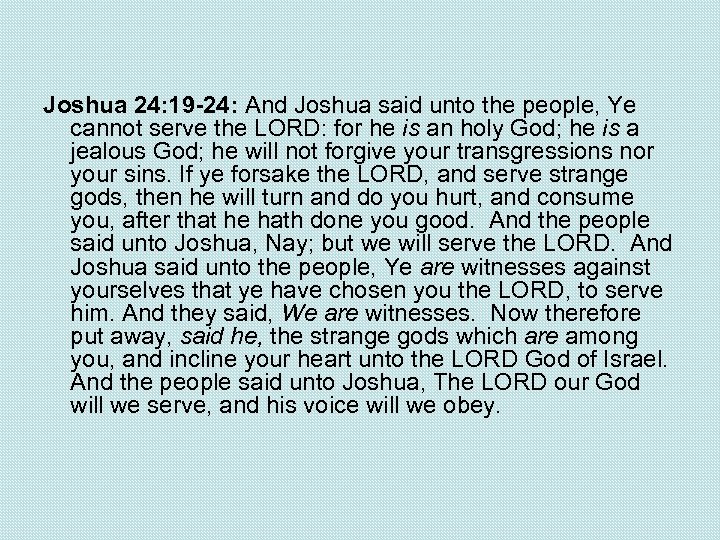 Deuteronomy 31: 10 -13: And Moses commanded them, saying, At the end of every seven years, in the solemnity of the year of release, in the feast of tabernacles, When all Israel is come to appear before the LORD thy God in the place which he shall choose, thou shalt read this law before all Israel in their hearing. Gather the people together, men, and women, and children, and thy stranger that is within thy gates, that they may hear, and that they may learn, and fear the LORD your God, and observe to do all the words of this law: And that their children, which have not known any thing, may hear, and learn to fear the LORD your God, as long as ye live in the land whither ye go over Jordan to possess it.

Why was Shechem chosen for the convocation? Genesis 12: 6 -7: And Abram passed through the land unto the place of Sichem, unto the plain of Moreh. And the Canaanite was then in the land. And the LORD appeared unto Abram, and said, Unto thy seed will I give this land: and there builded he an altar unto the LORD, who appeared unto him. Genesis 33: 18 -20: And Jacob came to Shalem, a city of Shechem, which is in the land of Canaan, when he came from Padan-aram; and pitched his tent before the city. And he bought a parcel of a field, where he had spread his tent, at the hand of the children of Hamor, Shechem’s father, for an hundred pieces of money. And he erected there an altar, and called it El-elohe-Israel.

Joshua 24: 32: And the bones of Joseph, which the children of Israel brought up out of Egypt, buried they in Shechem, in a parcel of ground which Jacob bought of the sons of Hamor the father of Shechem for an hundred pieces of silver: and it became the inheritance of the children of Joseph.

Joshua 8: 30 -33: Then Joshua built an altar unto the LORD God of Israel in mount Ebal, As Moses the servant of the LORD commanded the children of Israel, as it is written in the book of the law of Moses, an altar of whole stones, over which no man hath lift up any iron: and they offered thereon burnt offerings unto the LORD, and sacrificed peace offerings. And he wrote there upon the stones a copy of the law of Moses, which he wrote in the presence of the children of Israel. And all Israel, and their elders, and officers, and their judges, stood on this side the ark and on that side before the priests the Levites, which bare the ark of the covenant of the LORD, as well the stranger, as he that was born among them; half of them over against mount Gerizim, and half of them over against mount Ebal; as Moses the servant of the LORD had commanded before, that they should bless the people of Israel.

Joshua 8: 34 -35: And afterward he read all the words of the law, the blessings and cursings, according to all that is written in the book of the law. There was not a word of all that Moses commanded, which Joshua read not before all the congregation of Israel, with the women, and the little ones, and the strangers that were conversant among them.

Joshua 24: 14 -18: Now therefore fear the LORD, and serve him in sincerity and in truth: and put away the gods which your fathers served on the other side of the flood, and in Egypt; and serve ye the LORD. And if it seem evil unto you to serve the LORD, choose you this day whom ye will serve; whether the gods which your fathers served that were on the other side of the flood, or the gods of the Amorites, in whose land ye dwell: but as for me and my house, we will serve the LORD. And the people answered and said, God forbid that we should forsake the LORD, to serve other gods; For the LORD our God, he it is that brought us up and our fathers out of the land of Egypt, from the house of bondage, and which did those great signs in our sight, and preserved us in all the way wherein we went, and among all the people through whom we passed: And the LORD drave out from before us all the people, even the Amorites which dwelt in the land: therefore will we also serve the LORD; for he is our God.

Matthew 10: 28: And fear not them which kill the body, but are not able to kill the soul: but rather fear him which is able to destroy both soul and body in hell. Genesis 35: 2: Then Jacob said unto his household, and to all that were with him, Put away the strange gods that are among you, and be clean, and change your garments: Joshua 23: 14: And, behold, this day I am going the way of all the earth: and ye know in all your hearts and in all your souls, that not one thing hath failed of all the good things which the LORD your God spake concerning you; all are come to pass unto you, and not one thing hath failed thereof.

Joshua 24: 19 -24: And Joshua said unto the people, Ye cannot serve the LORD: for he is an holy God; he is a jealous God; he will not forgive your transgressions nor your sins. If ye forsake the LORD, and serve strange gods, then he will turn and do you hurt, and consume you, after that he hath done you good. And the people said unto Joshua, Nay; but we will serve the LORD. And Joshua said unto the people, Ye are witnesses against yourselves that ye have chosen you the LORD, to serve him. And they said, We are witnesses. Now therefore put away, said he, the strange gods which are among you, and incline your heart unto the LORD God of Israel. And the people said unto Joshua, The LORD our God will we serve, and his voice will we obey.