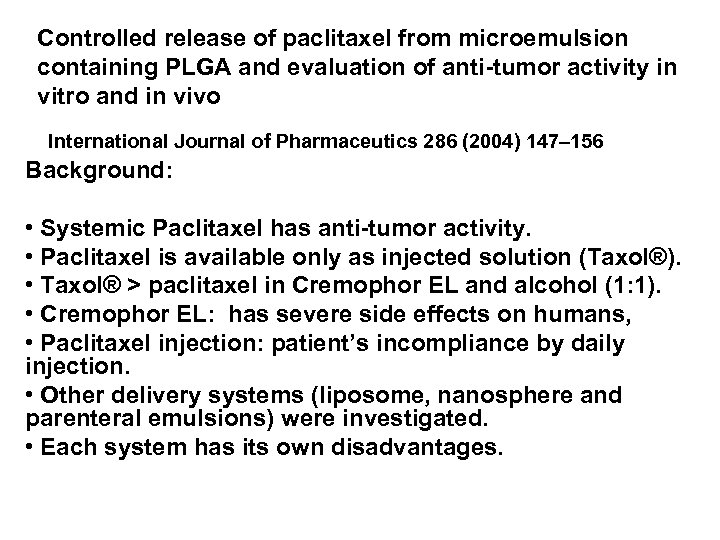 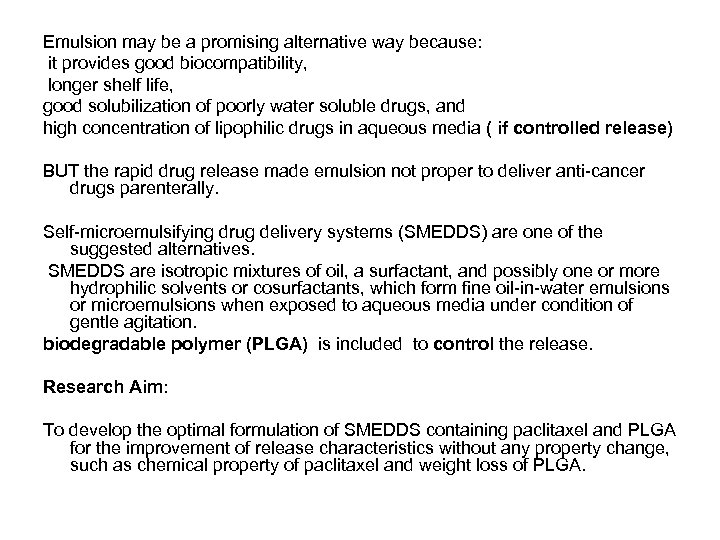 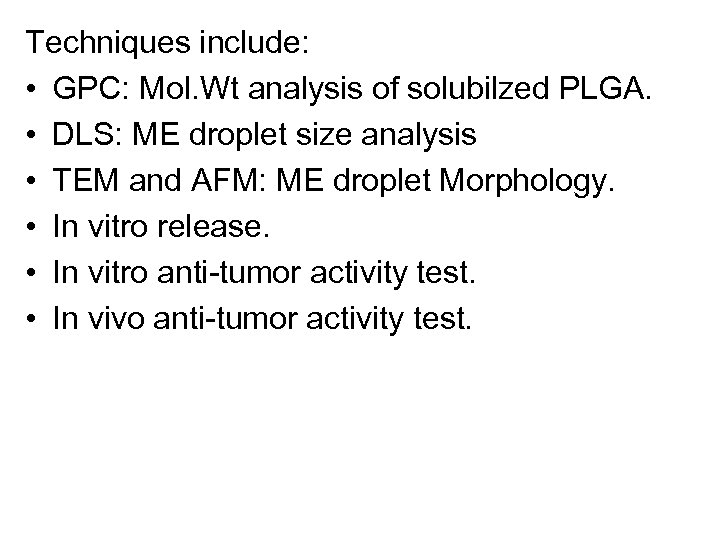 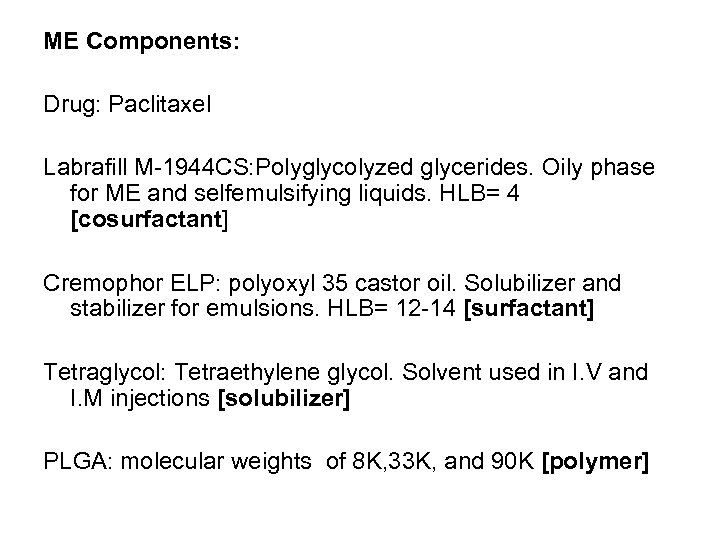 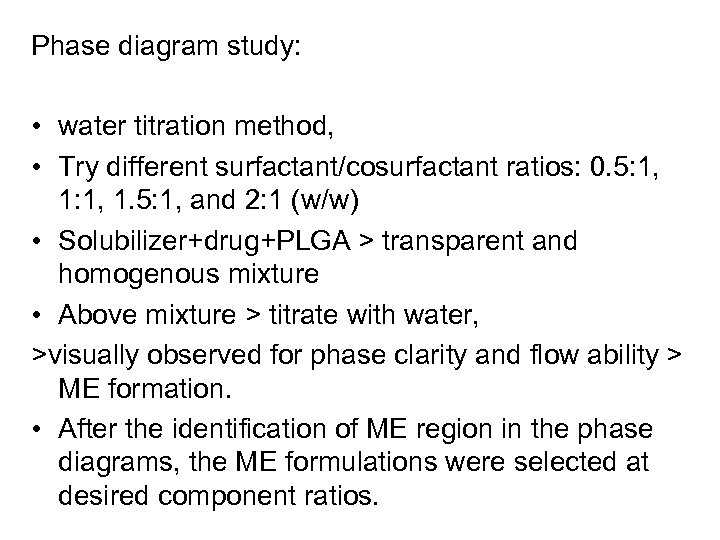 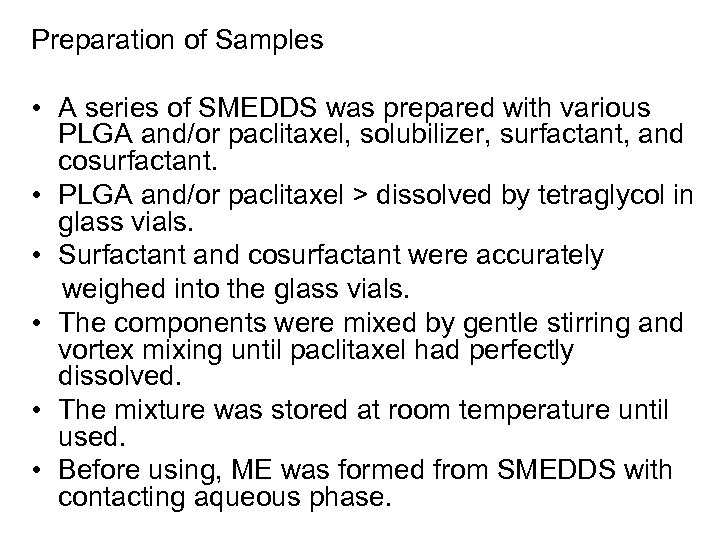 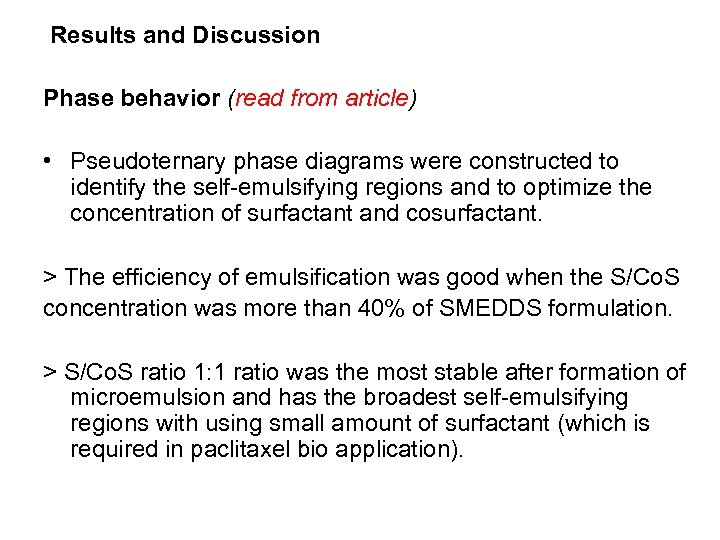 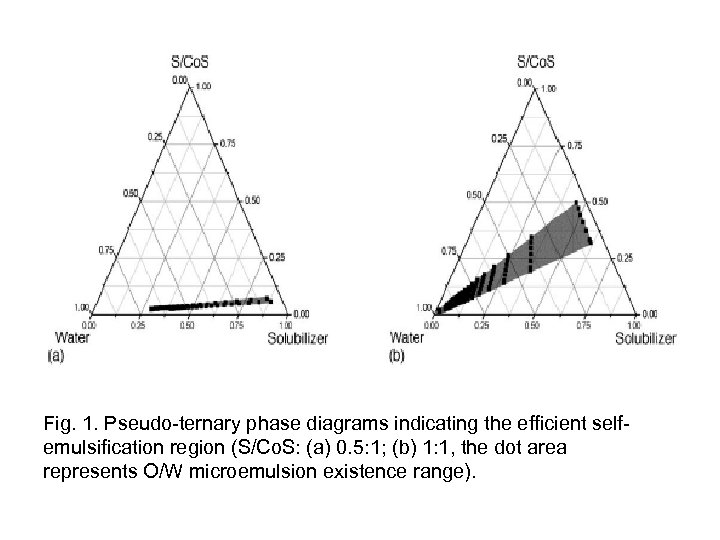 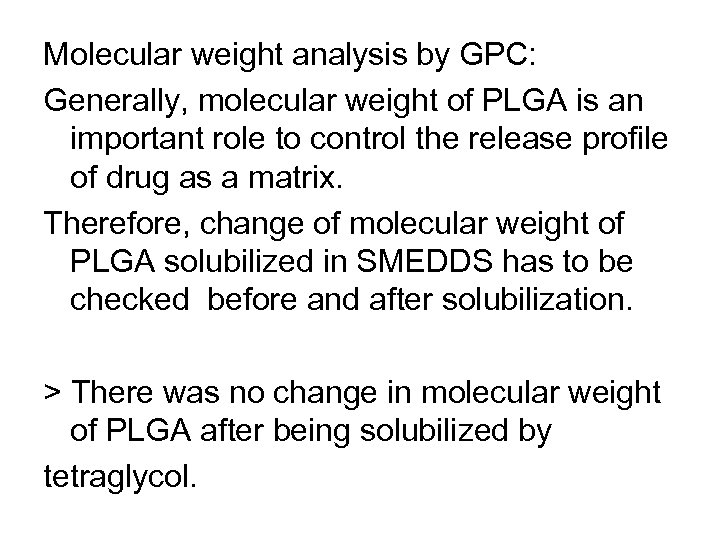 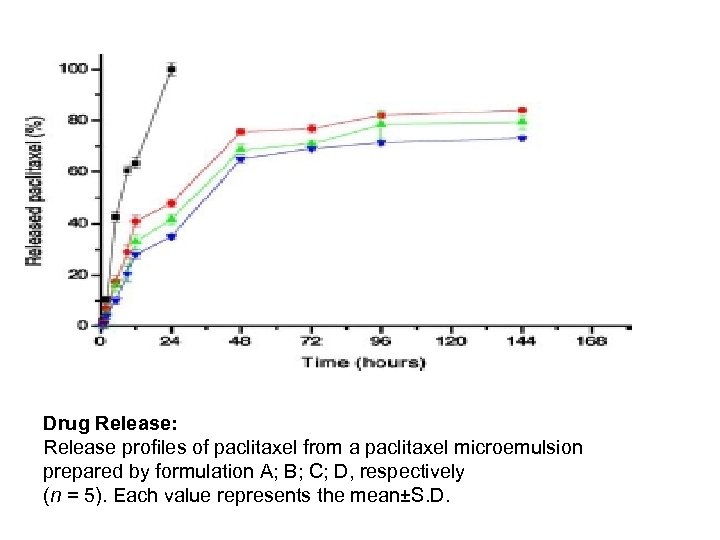 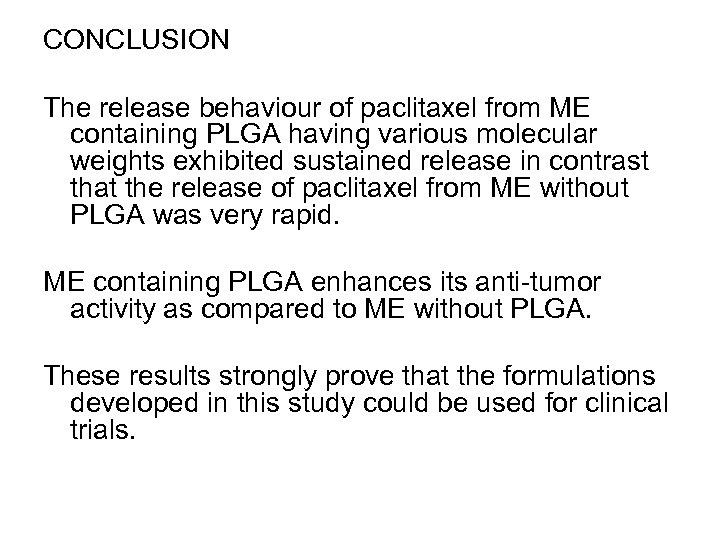 Controlled release of paclitaxel from microemulsion containing PLGA and evaluation of anti-tumor activity in vitro and in vivo International Journal of Pharmaceutics 286 (2004) 147– 156 Background: • Systemic Paclitaxel has anti-tumor activity. • Paclitaxel is available only as injected solution (Taxol®). • Taxol® > paclitaxel in Cremophor EL and alcohol (1: 1). • Cremophor EL: has severe side effects on humans, • Paclitaxel injection: patient’s incompliance by daily injection. • Other delivery systems (liposome, nanosphere and parenteral emulsions) were investigated. • Each system has its own disadvantages.

Emulsion may be a promising alternative way because: it provides good biocompatibility, longer shelf life, good solubilization of poorly water soluble drugs, and high concentration of lipophilic drugs in aqueous media ( if controlled release) BUT the rapid drug release made emulsion not proper to deliver anti-cancer drugs parenterally. Self-microemulsifying drug delivery systems (SMEDDS) are one of the suggested alternatives. SMEDDS are isotropic mixtures of oil, a surfactant, and possibly one or more hydrophilic solvents or cosurfactants, which form fine oil-in-water emulsions or microemulsions when exposed to aqueous media under condition of gentle agitation. biodegradable polymer (PLGA) is included to control the release. Research Aim: To develop the optimal formulation of SMEDDS containing paclitaxel and PLGA for the improvement of release characteristics without any property change, such as chemical property of paclitaxel and weight loss of PLGA.

Phase diagram study: • water titration method, • Try different surfactant/cosurfactant ratios: 0. 5: 1, 1. 5: 1, and 2: 1 (w/w) • Solubilizer+drug+PLGA > transparent and homogenous mixture • Above mixture > titrate with water, >visually observed for phase clarity and flow ability > ME formation. • After the identification of ME region in the phase diagrams, the ME formulations were selected at desired component ratios.

Preparation of Samples • A series of SMEDDS was prepared with various PLGA and/or paclitaxel, solubilizer, surfactant, and cosurfactant. • PLGA and/or paclitaxel > dissolved by tetraglycol in glass vials. • Surfactant and cosurfactant were accurately weighed into the glass vials. • The components were mixed by gentle stirring and vortex mixing until paclitaxel had perfectly dissolved. • The mixture was stored at room temperature until used. • Before using, ME was formed from SMEDDS with contacting aqueous phase.

Results and Discussion Phase behavior (read from article) • Pseudoternary phase diagrams were constructed to identify the self-emulsifying regions and to optimize the concentration of surfactant and cosurfactant. > The efficiency of emulsification was good when the S/Co. S concentration was more than 40% of SMEDDS formulation. > S/Co. S ratio 1: 1 ratio was the most stable after formation of microemulsion and has the broadest self-emulsifying regions with using small amount of surfactant (which is required in paclitaxel bio application).

Drug Release: Release profiles of paclitaxel from a paclitaxel microemulsion prepared by formulation A; B; C; D, respectively (n = 5). Each value represents the mean±S. D.

CONCLUSION The release behaviour of paclitaxel from ME containing PLGA having various molecular weights exhibited sustained release in contrast that the release of paclitaxel from ME without PLGA was very rapid. ME containing PLGA enhances its anti-tumor activity as compared to ME without PLGA. These results strongly prove that the formulations developed in this study could be used for clinical trials.

1 Polymers in functionalization of nanoparticles and nanocomposites.