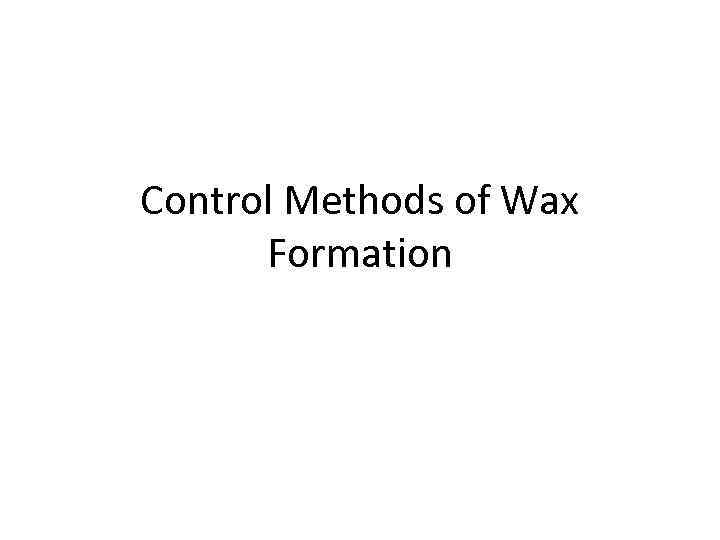 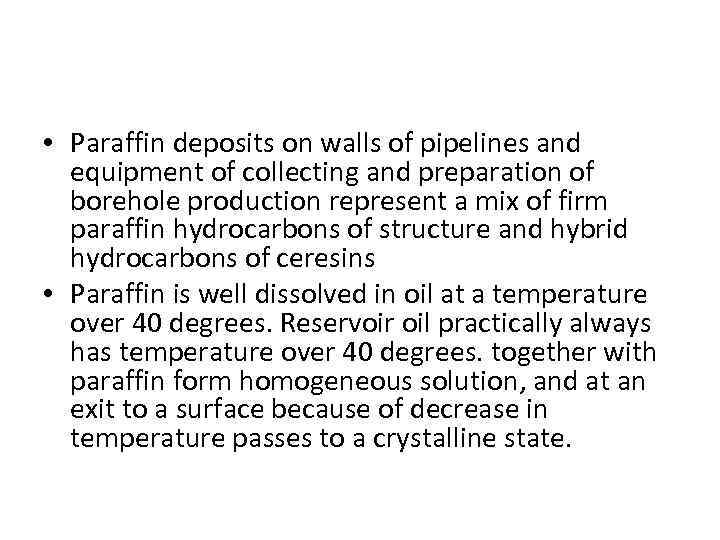 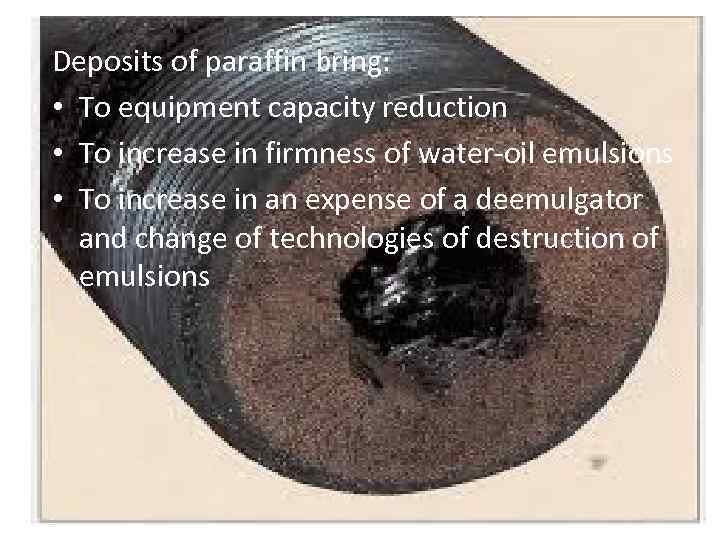 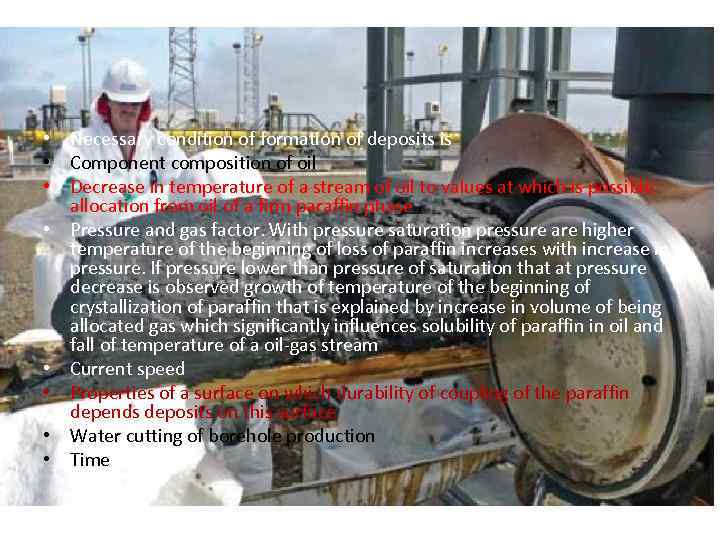 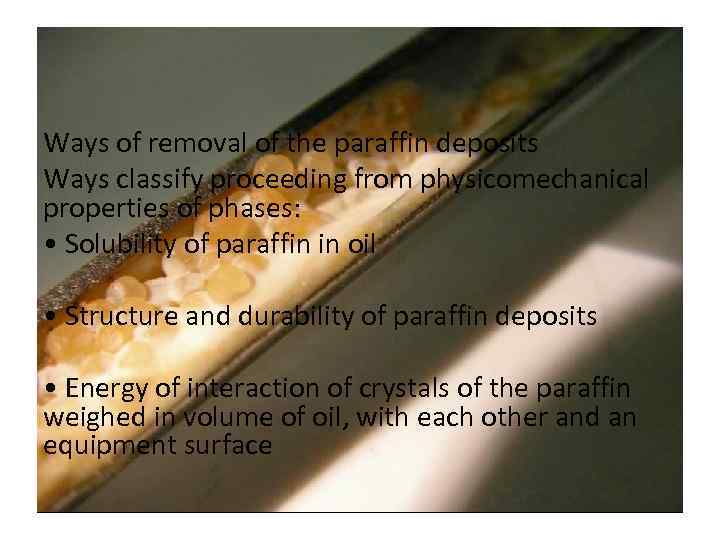 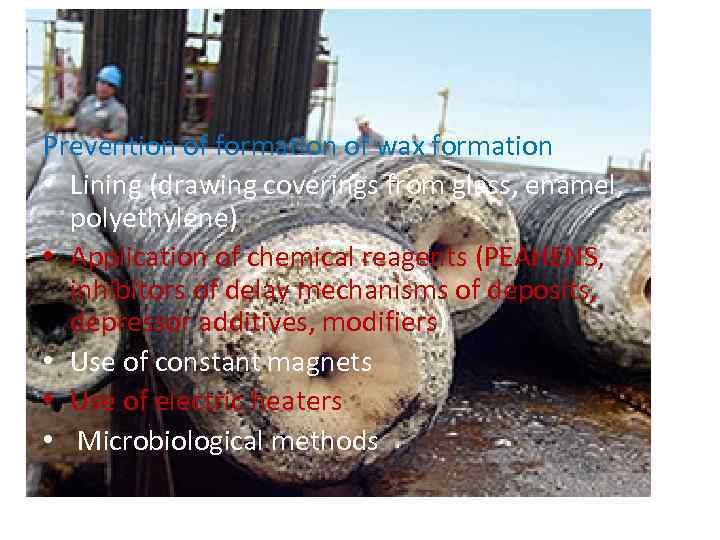 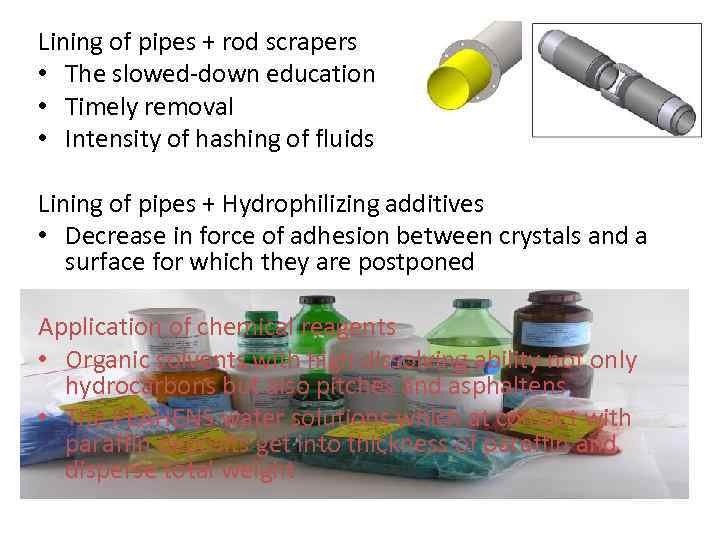 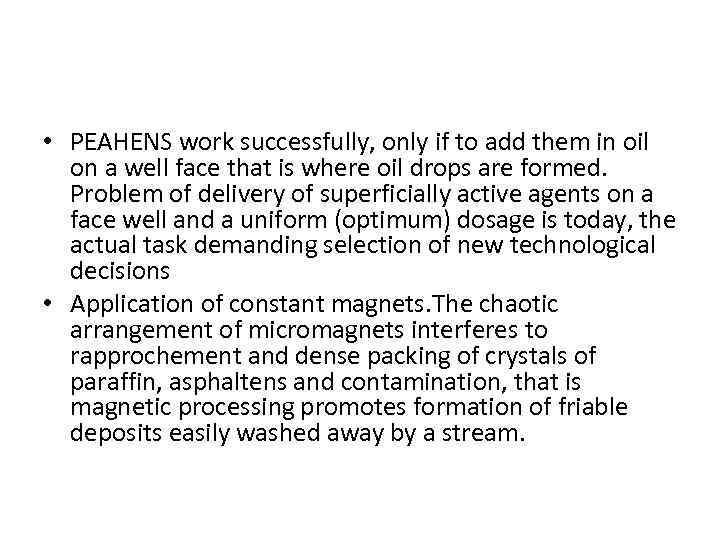 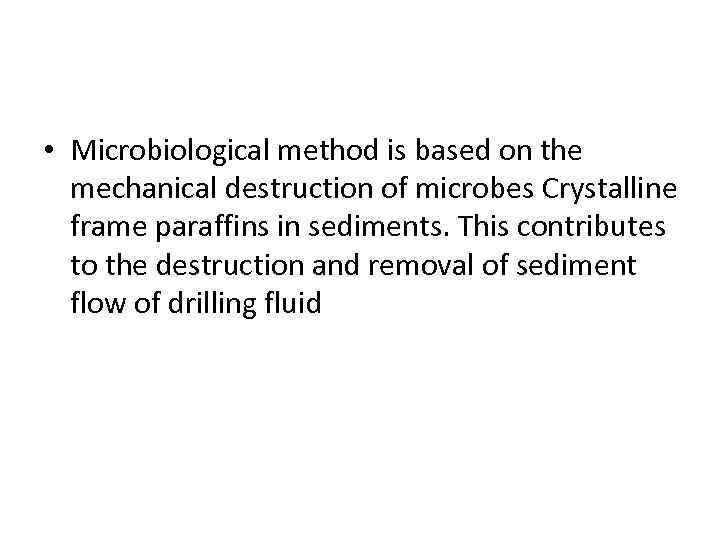 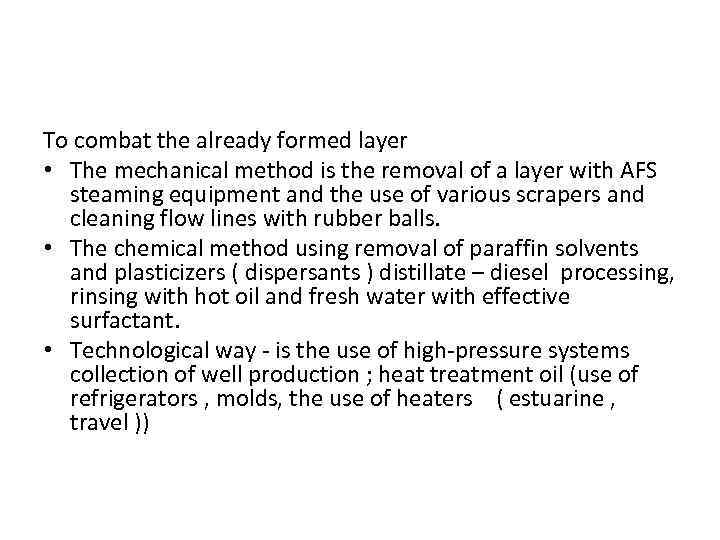 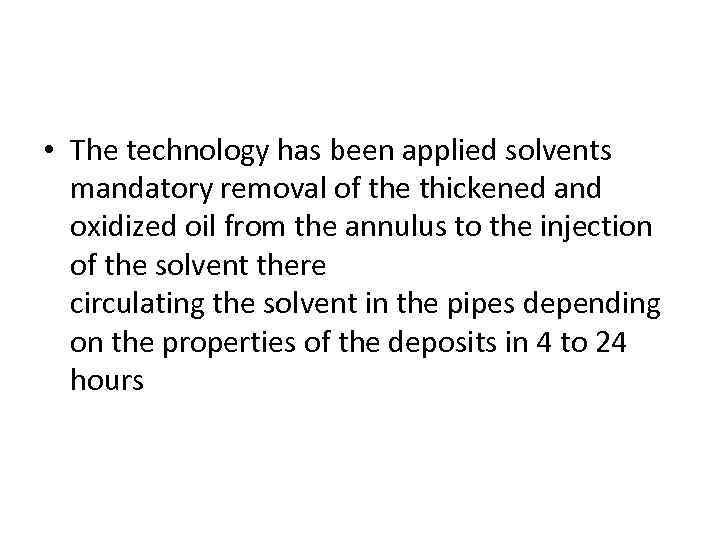 • Paraffin deposits on walls of pipelines and equipment of collecting and preparation of borehole production represent a mix of firm paraffin hydrocarbons of structure and hybrid hydrocarbons of ceresins • Paraffin is well dissolved in oil at a temperature over 40 degrees. Reservoir oil practically always has temperature over 40 degrees. together with paraffin form homogeneous solution, and at an exit to a surface because of decrease in temperature passes to a crystalline state.

Deposits of paraffin bring: • To equipment capacity reduction • To increase in firmness of water-oil emulsions • To increase in an expense of a deemulgator and change of technologies of destruction of emulsions

• Necessary condition of formation of deposits is • Component composition of oil • Decrease in temperature of a stream of oil to values at which is possible allocation from oil of a firm paraffin phase • Pressure and gas factor. With pressure saturation pressure are higher temperature of the beginning of loss of paraffin increases with increase in pressure. If pressure lower than pressure of saturation that at pressure decrease is observed growth of temperature of the beginning of crystallization of paraffin that is explained by increase in volume of being allocated gas which significantly influences solubility of paraffin in oil and fall of temperature of a oil-gas stream • Current speed • Properties of a surface on which durability of coupling of the paraffin depends deposits on this surface • Water cutting of borehole production • Time

• PEAHENS work successfully, only if to add them in oil on a well face that is where oil drops are formed. Problem of delivery of superficially active agents on a face well and a uniform (optimum) dosage is today, the actual task demanding selection of new technological decisions • Application of constant magnets. The chaotic arrangement of micromagnets interferes to rapprochement and dense packing of crystals of paraffin, asphaltens and contamination, that is magnetic processing promotes formation of friable deposits easily washed away by a stream.

• Microbiological method is based on the mechanical destruction of microbes Crystalline frame paraffins in sediments. This contributes to the destruction and removal of sediment flow of drilling fluid

To combat the already formed layer • The mechanical method is the removal of a layer with AFS steaming equipment and the use of various scrapers and cleaning flow lines with rubber balls. • The chemical method using removal of paraffin solvents and plasticizers ( dispersants ) distillate – diesel processing, rinsing with hot oil and fresh water with effective surfactant. • Technological way - is the use of high-pressure systems collection of well production ; heat treatment oil (use of refrigerators , molds, the use of heaters ( estuarine , travel ))