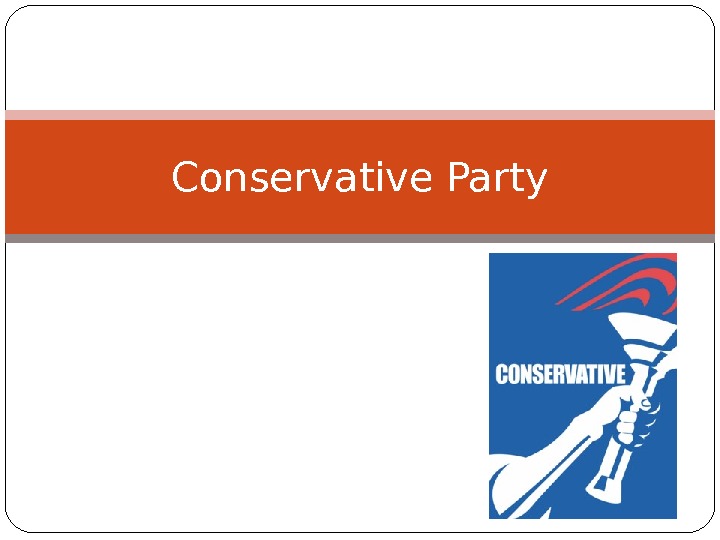 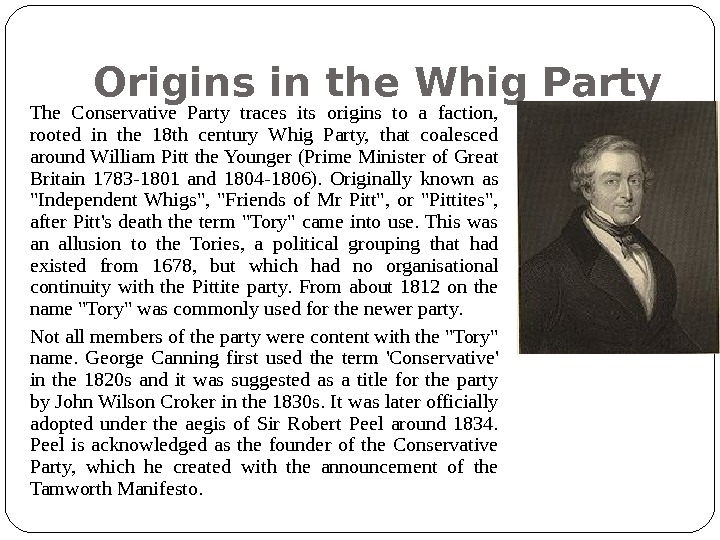 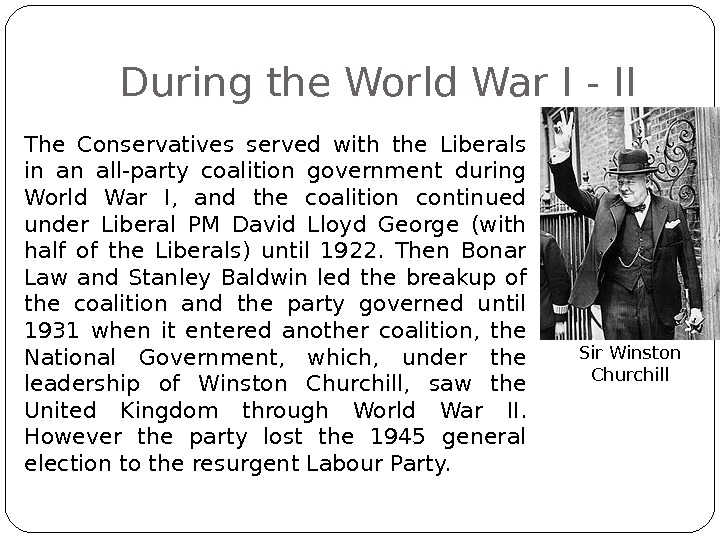 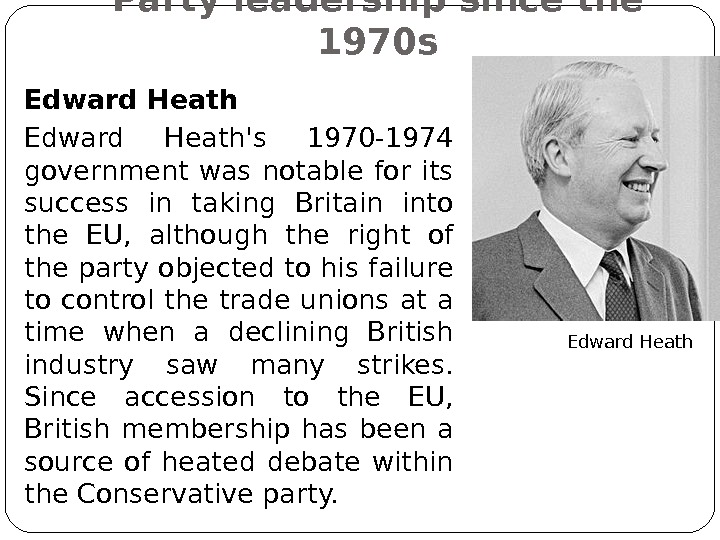 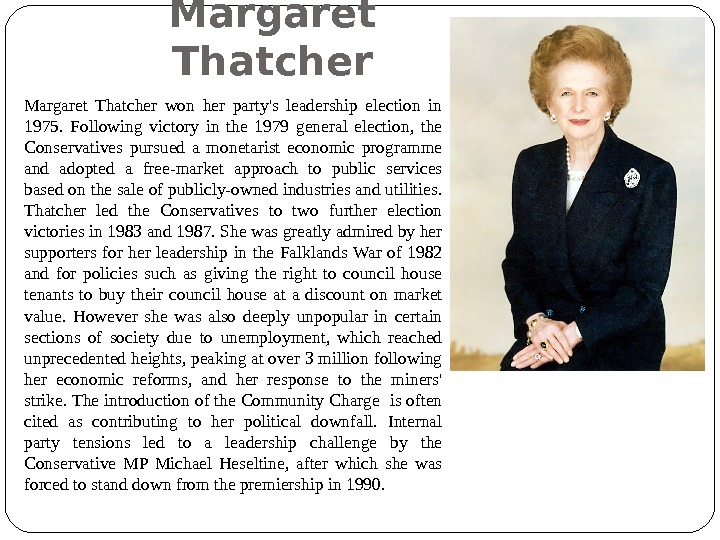 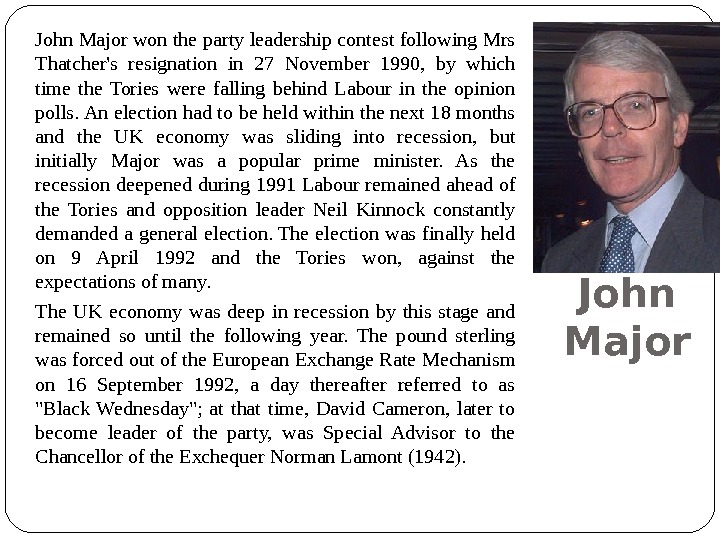 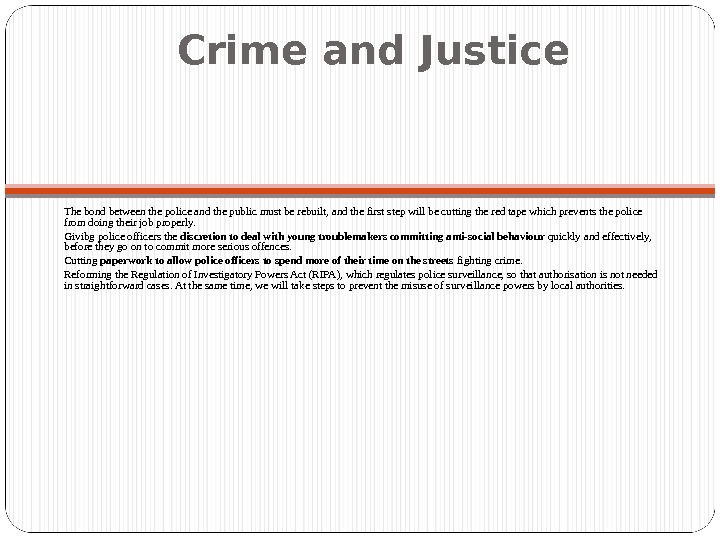 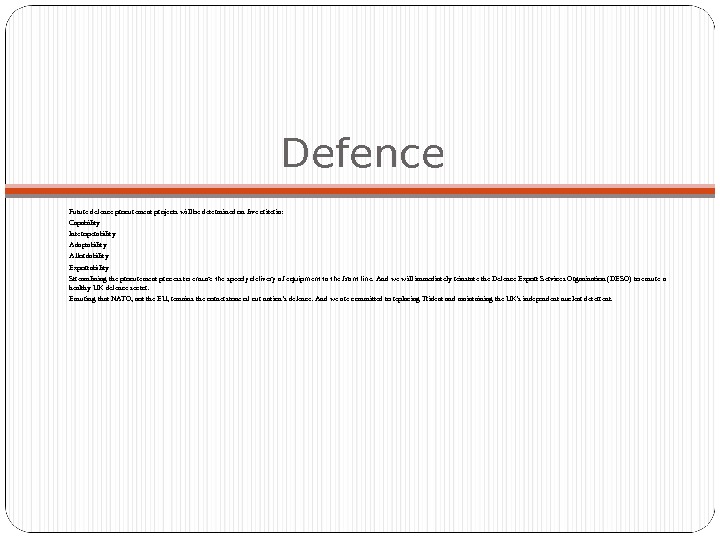 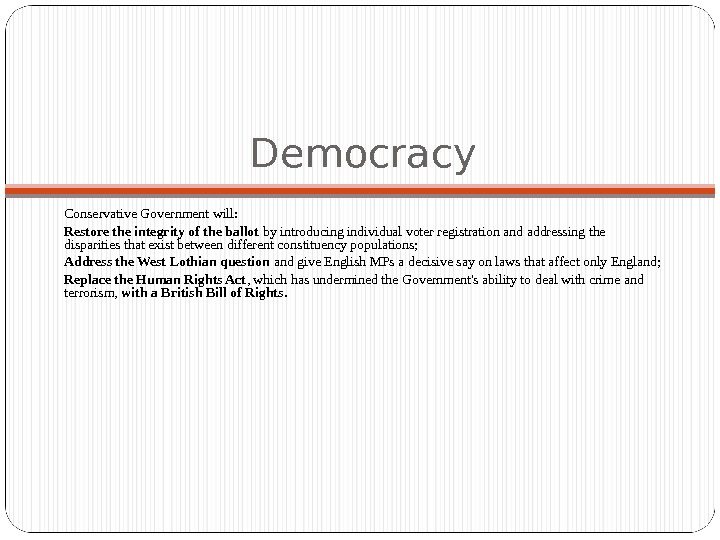 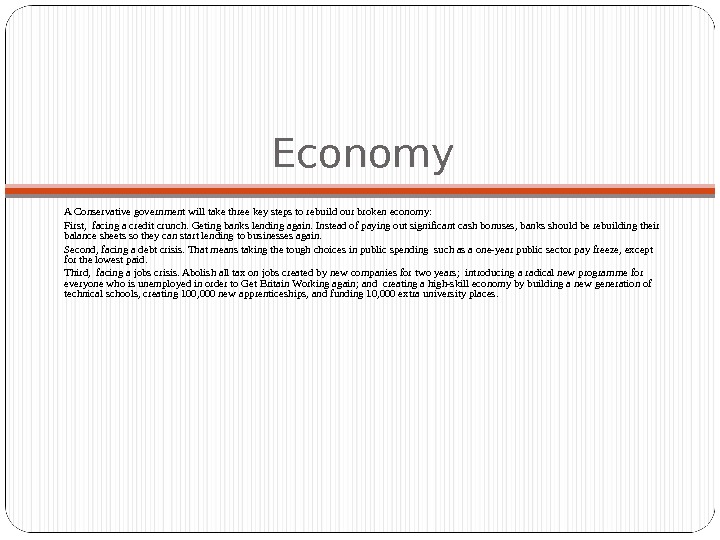 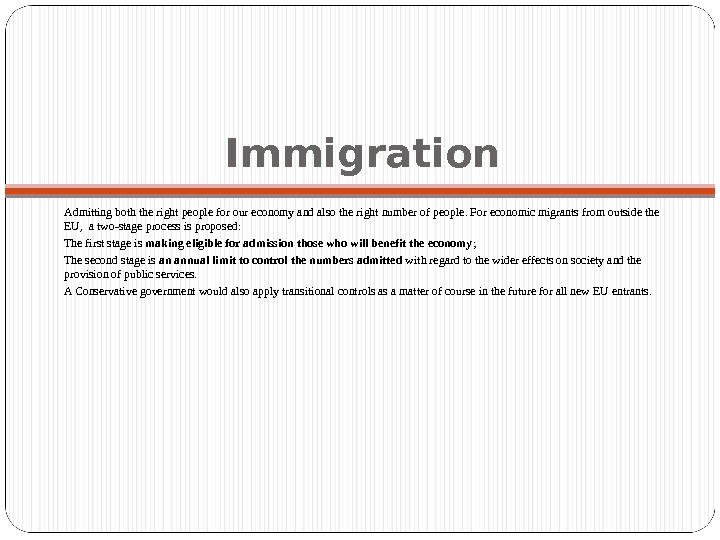 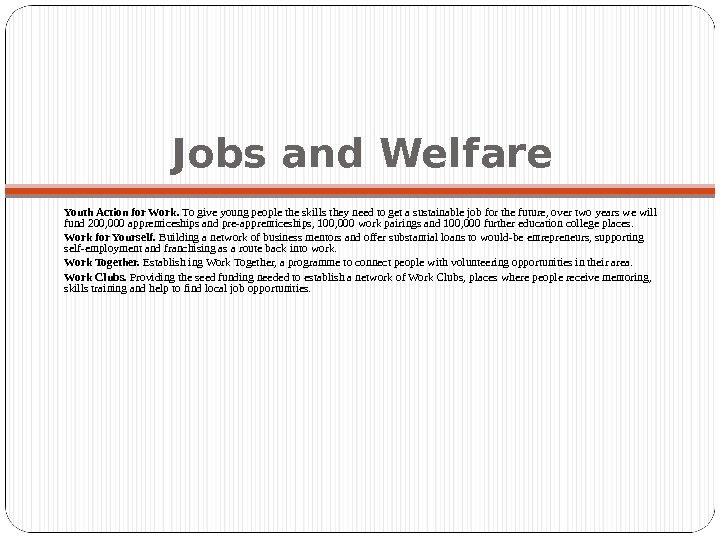 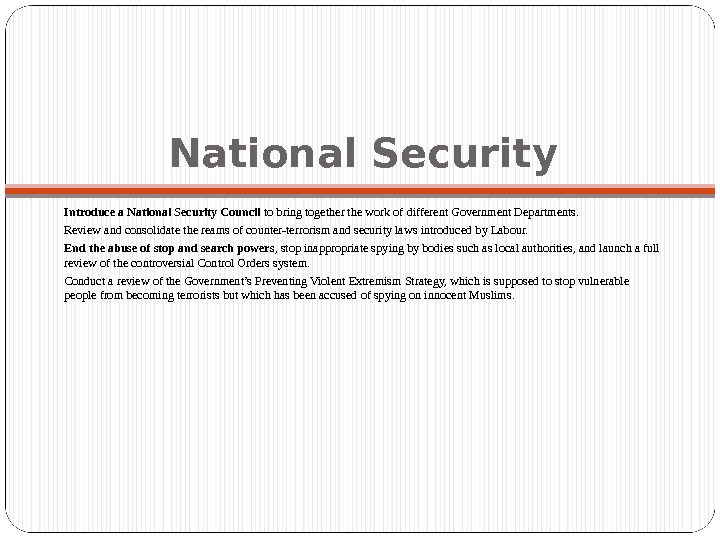 Origins in the Whig Party The Conservative Party traces its origins to a faction, rooted in the 18 th century Whig Party, that coalesced around William Pitt the Younger (Prime Minister of Great Britain 1783 -1801 and 1804 -1806). Originally known as «Independent Whigs», «Friends of Mr Pitt», or «Pittites», after Pitt’s death the term «Tory» came into use. This was an allusion to the Tories, a political grouping that had existed from 1678, but which had no organisational continuity with the Pittite party. From about 1812 on the name «Tory» was commonly used for the newer party. Not all members of the party were content with the «Tory» name. George Canning first used the term ‘Conservative’ in the 1820 s and it was suggested as a title for the party by John Wilson Croker in the 1830 s. It was later officially adopted under the aegis of Sir Robert Peel around 1834. Peel is acknowledged as the founder of the Conservative Party, which he created with the announcement of the Tamworth Manifesto.

During the World War I — II The Conservatives served with the Liberals in an all-party coalition government during World War I, and the coalition continued under Liberal PM David Lloyd George (with half of the Liberals) until 1922. Then Bonar Law and Stanley Baldwin led the breakup of the coalition and the party governed until 1931 when it entered another coalition, the National Government, which, under the leadership of Winston Churchill, saw the United Kingdom through World War II. However the party lost the 1945 general election to the resurgent Labour Party. Sir Winston Churchill

Party leadership since the 1970 s Edward Heath’s 1970 -1974 government was notable for its success in taking Britain into the EU, although the right of the party objected to his failure to control the trade unions at a time when a declining British industry saw many strikes. Since accession to the EU, British membership has been a source of heated debate within the Conservative party. Edward Heath

Margaret Thatcher won her party’s leadership election in 1975. Following victory in the 1979 general election, the Conservatives pursued a monetarist economic programme and adopted a free-market approach to public services based on the sale of publicly-owned industries and utilities. Thatcher led the Conservatives to two further election victories in 1983 and 1987. She was greatly admired by her supporters for her leadership in the Falklands War of 1982 and for policies such as giving the right to council house tenants to buy their council house at a discount on market value. However she was also deeply unpopular in certain sections of society due to unemployment, which reached unprecedented heights, peaking at over 3 million following her economic reforms, and her response to the miners’ strike. The introduction of the Community Charge is often cited as contributing to her political downfall. Internal party tensions led to a leadership challenge by the Conservative MP Michael Heseltine, after which she was forced to stand down from the premiership in 1990.

John Major won the party leadership contest following Mrs Thatcher’s resignation in 27 November 1990, by which time the Tories were falling behind Labour in the opinion polls. An election had to be held within the next 18 months and the UK economy was sliding into recession, but initially Major was a popular prime minister. As the recession deepened during 1991 Labour remained ahead of the Tories and opposition leader Neil Kinnock constantly demanded a general election. The election was finally held on 9 April 1992 and the Tories won, against the expectations of many. The UK economy was deep in recession by this stage and remained so until the following year. The pound sterling was forced out of the European Exchange Rate Mechanism on 16 September 1992, a day thereafter referred to as «Black Wednesday»; at that time, David Cameron, later to become leader of the party, was Special Advisor to the Chancellor of the Exchequer Norman Lamont (1942).

David Cameron describes himself as a «modern compassionate conservative» and has spoken of a need for a new style of politics, saying that he was «fed up with the Punch and Judy politics of Westminster». He has stated that he is «certainly a big Thatcher fan, but I don’t know whether that makes me a Thatcherite. “ He has also claimed to be a «liberal Conservative», and «not a deeply ideological person. “ Cameron has stated that he does not intend to oppose the government as a matter of course, and will offer his support in areas of agreement. He has urged politicians to concentrate more on improving people’s happiness and «general well-being», instead of focusing solely on «financial wealth». There have been claims that he described himself to journalists at a dinner during the leadership contest as the «heir to Blair». He believes that British Muslims have a duty to integrate into British culture, but notes that they find aspects such as high family breakdown and high drug use uninspiring, and notes that «Not for the first time, I found myself thinking that it is mainstream Britain which needs to integrate more with the British Asian way of life, not the other way around. «

Crime and Justice The bond between the police and the public must be rebuilt, and the first step will be cutting the red tape which prevents the police from doing their job properly. Givibg police officers the discretion to deal with young troublemakers committing anti-social behaviour quickly and effectively, before they go on to commit more serious offences. Cutting paperwork to allow police officers to spend more of their time on the streets fighting crime. Reforming the Regulation of Investigatory Powers Act (RIPA), which regulates police surveillance, so that authorisation is not needed in straightforward cases. At the same time, we will take steps to prevent the misuse of surveillance powers by local authorities.

Defence Future defence procurement projects will be determined on five criteria: Capability Interoperability Adaptability Affordability Exportability Streamlining the procurement process to ensure the speedy delivery of equipment to the front line. And we will immediately reinstate the Defence Export Services Organisation (DESO) to ensure a healthy UK defence sector. Ensuring that NATO, not the EU, remains the cornerstone of our nation’s defence. And we are committed to replacing Trident and maintaining the UK’s independent nuclear deterrent.

Democracy Conservative Government will: Restore the integrity of the ballot by introducing individual voter registration and addressing the disparities that exist between different constituency populations; Address the West Lothian question and give English MPs a decisive say on laws that affect only England; Replace the Human Rights Act , which has undermined the Government’s ability to deal with crime and terrorism, with a British Bill of Rights.

Economy A Conservative government will take three key steps to rebuild our broken economy: First, facing a credit crunch. Geting banks lending again. Instead of paying out significant cash bonuses, banks should be rebuilding their balance sheets so they can start lending to businesses again. Second, facing a debt crisis. That means taking the tough choices in public spending such as a one-year public sector pay freeze, except for the lowest paid. Third, facing a jobs crisis. Abolish all tax on jobs created by new companies for two years; introducing a radical new programme for everyone who is unemployed in order to Get Britain Working again; and creating a high-skill economy by building a new generation of technical schools, creating 100, 000 new apprenticeships, and funding 10, 000 extra university places.

Immigration Admitting both the right people for our economy and also the right number of people. For economic migrants from outside the EU, a two-stage process is proposed: The first stage is making eligible for admission those who will benefit the economy ; The second stage is an annual limit to control the numbers admitted with regard to the wider effects on society and the provision of public services. A Conservative government would also apply transitional controls as a matter of course in the future for all new EU entrants.

Jobs and Welfare Youth Action for Work. To give young people the skills they need to get a sustainable job for the future, over two years we will fund 200, 000 apprenticeships and pre-apprenticeships, 100, 000 work pairings and 100, 000 further education college places. Work for Yourself. Building a network of business mentors and offer substantial loans to would-be entrepreneurs, supporting self-employment and franchising as a route back into work. Work Together. Establish ing Work Together, a programme to connect people with volunteering opportunities in their area. Work Clubs. Providing the seed funding needed to establish a network of Work Clubs, places where people receive mentoring, skills training and help to find local job opportunities.

National Security Introduce a National Security Council to bring together the work of different Government Departments. Review and consolidate the reams of counter-terrorism and security laws introduced by Labour. End the abuse of stop and search powers , stop inappropriate spying by bodies such as local authorities, and launch a full review of the controversial Control Orders system. Conduct a review of the Government’s Preventing Violent Extremism Strategy, which is supposed to stop vulnerable people from becoming terrorists but which has been accused of spying on innocent Muslims.