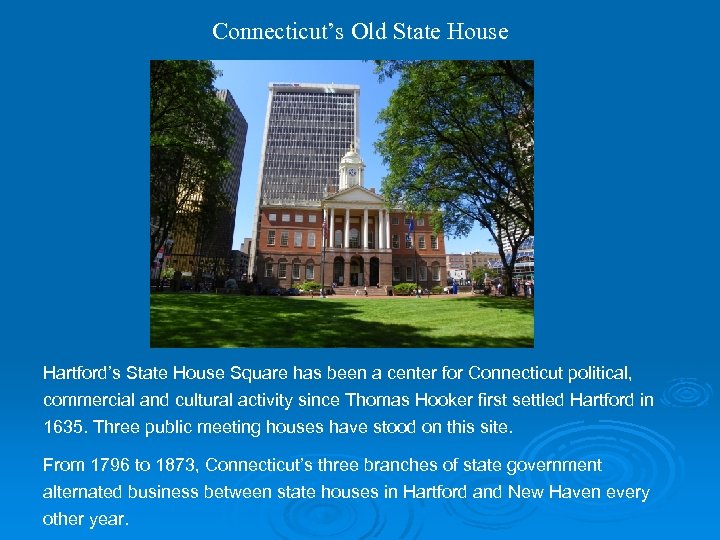 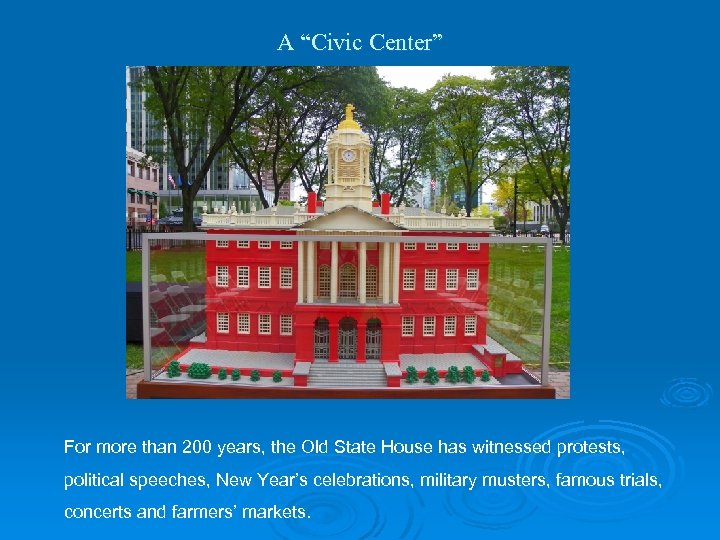 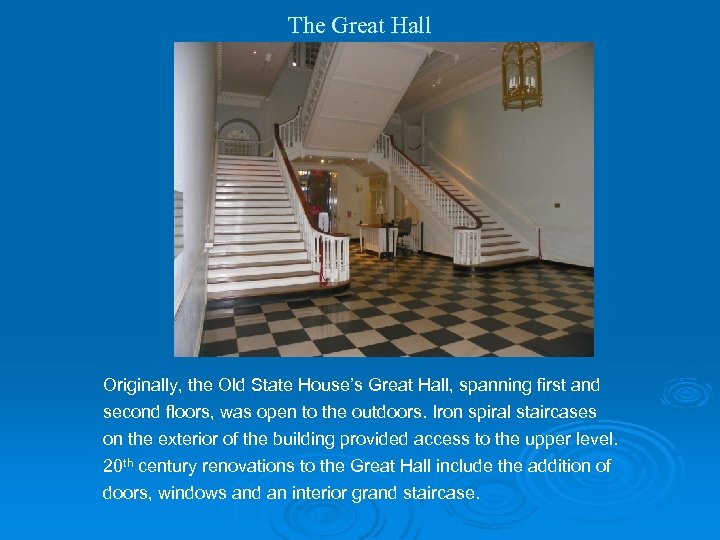 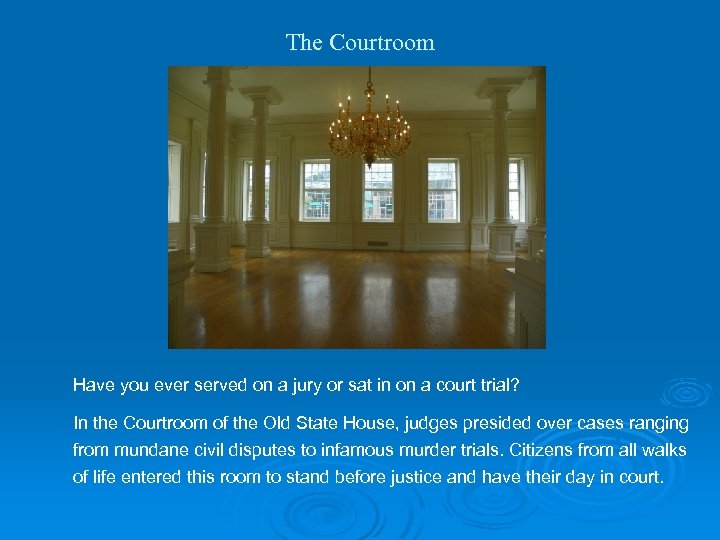 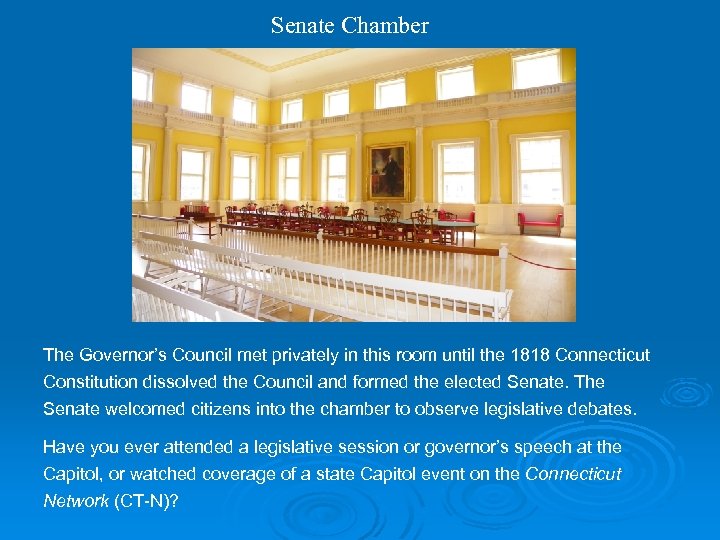 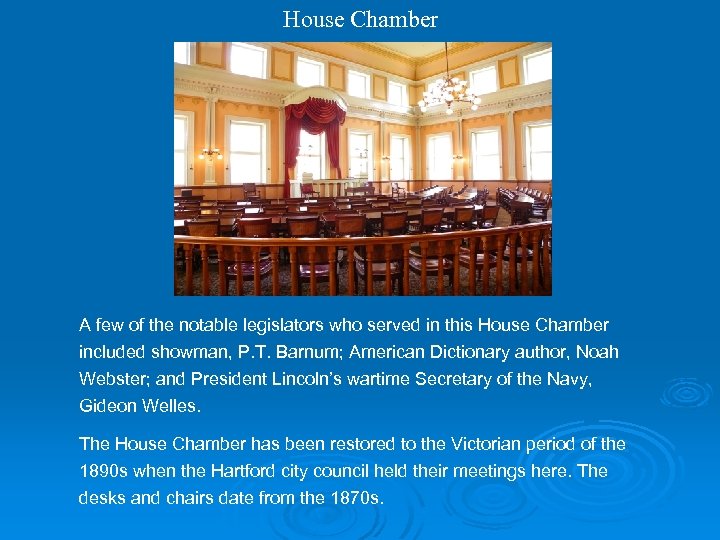 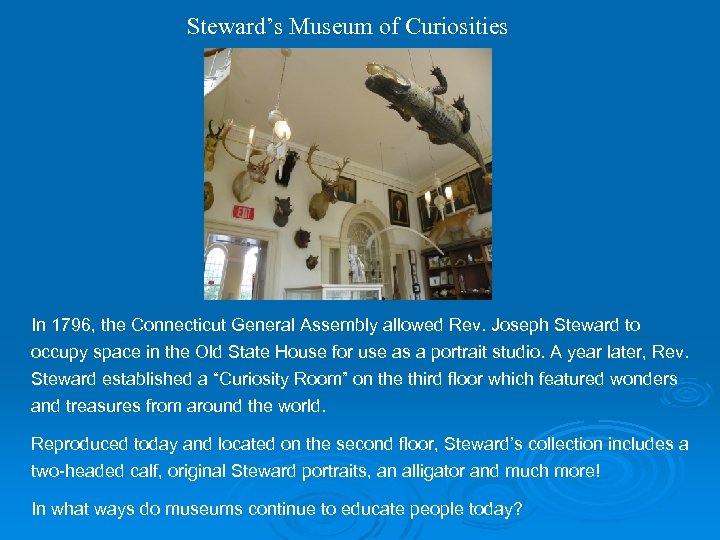 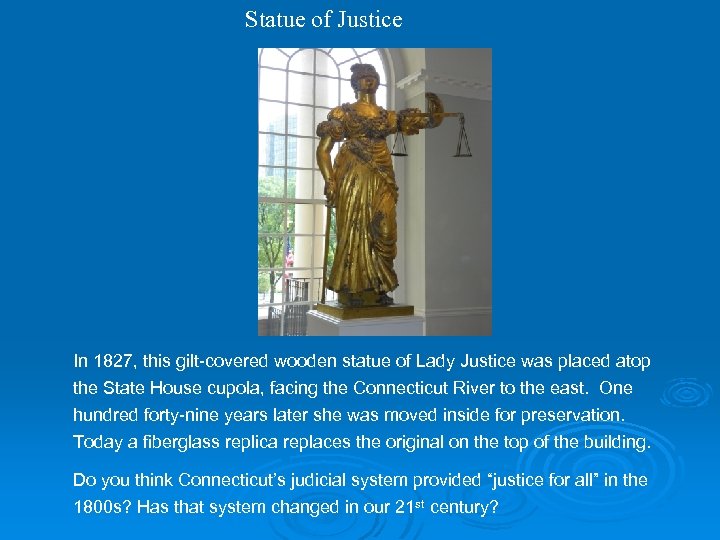 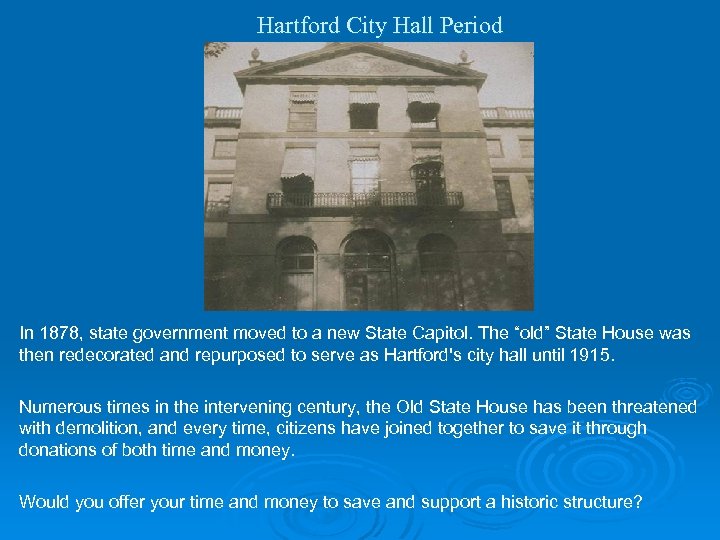 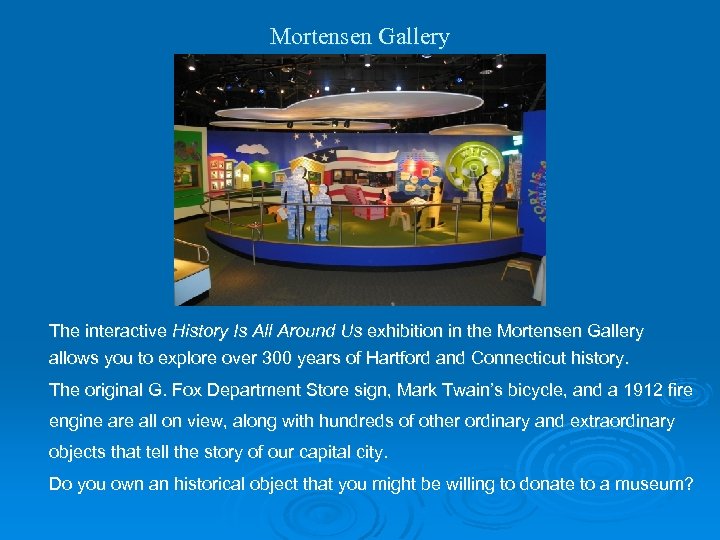 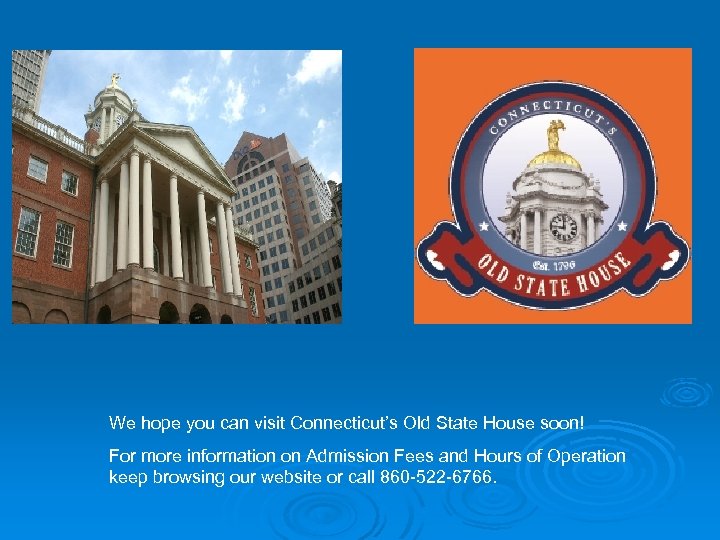 Connecticut’s Old State House Hartford’s State House Square has been a center for Connecticut political, commercial and cultural activity since Thomas Hooker first settled Hartford in 1635. Three public meeting houses have stood on this site. From 1796 to 1873, Connecticut’s three branches of state government alternated business between state houses in Hartford and New Haven every other year.

A Hub The marble floor of our welcome area features an inlaid compass reminding us of the central role played by the Old State House in Connecticut politics, culture and commerce. Throughout Connecticut, rock slabs served as “milestones”. The one above measures the distance to the Old State House, often referred to as the “Hartford Court House”.

The Great Hall Originally, the Old State House’s Great Hall, spanning first and second floors, was open to the outdoors. Iron spiral staircases on the exterior of the building provided access to the upper level. 20 th century renovations to the Great Hall include the addition of doors, windows and an interior grand staircase.

The Courtroom Have you ever served on a jury or sat in on a court trial? In the Courtroom of the Old State House, judges presided over cases ranging from mundane civil disputes to infamous murder trials. Citizens from all walks of life entered this room to stand before justice and have their day in court.

Senate Chamber The Governor’s Council met privately in this room until the 1818 Connecticut Constitution dissolved the Council and formed the elected Senate. The Senate welcomed citizens into the chamber to observe legislative debates. Have you ever attended a legislative session or governor’s speech at the Capitol, or watched coverage of a state Capitol event on the Connecticut Network (CT-N)?

House Chamber A few of the notable legislators who served in this House Chamber included showman, P. T. Barnum; American Dictionary author, Noah Webster; and President Lincoln’s wartime Secretary of the Navy, Gideon Welles. The House Chamber has been restored to the Victorian period of the 1890 s when the Hartford city council held their meetings here. The desks and chairs date from the 1870 s.

Steward’s Museum of Curiosities In 1796, the Connecticut General Assembly allowed Rev. Joseph Steward to occupy space in the Old State House for use as a portrait studio. A year later, Rev. Steward established a “Curiosity Room” on the third floor which featured wonders and treasures from around the world. Reproduced today and located on the second floor, Steward’s collection includes a two-headed calf, original Steward portraits, an alligator and much more! In what ways do museums continue to educate people today?

Statue of Justice In 1827, this gilt-covered wooden statue of Lady Justice was placed atop the State House cupola, facing the Connecticut River to the east. One hundred forty-nine years later she was moved inside for preservation. Today a fiberglass replica replaces the original on the top of the building. Do you think Connecticut’s judicial system provided “justice for all” in the 1800 s? Has that system changed in our 21 st century?

Hartford City Hall Period In 1878, state government moved to a new State Capitol. The “old” State House was then redecorated and repurposed to serve as Hartford's city hall until 1915. Numerous times in the intervening century, the Old State House has been threatened with demolition, and every time, citizens have joined together to save it through donations of both time and money. Would you offer your time and money to save and support a historic structure?

Emily Seymour Goodwin Holcombe Center The Emily Seymour Goodwin Holcombe Center provides a lively space for families and students to learn. Children can explore hands-on history activities, design their own state house on a Lego table, play in a replica of the Charter Oak and discover Hartford’s history through engaging murals that tell the city’s story. The mural above depicts the tightrope walker who made his precarious journey between the Old State House and a nearby bank in 1869! What piece of Connecticut history would you choose to illustrate on a mural?

Mortensen Gallery The interactive History Is All Around Us exhibition in the Mortensen Gallery allows you to explore over 300 years of Hartford and Connecticut history. The original G. Fox Department Store sign, Mark Twain’s bicycle, and a 1912 fire engine are all on view, along with hundreds of other ordinary and extraordinary objects that tell the story of our capital city. Do you own an historical object that you might be willing to donate to a museum?

We hope you can visit Connecticut’s Old State House soon! For more information on Admission Fees and Hours of Operation keep browsing our website or call 860 -522 -6766.