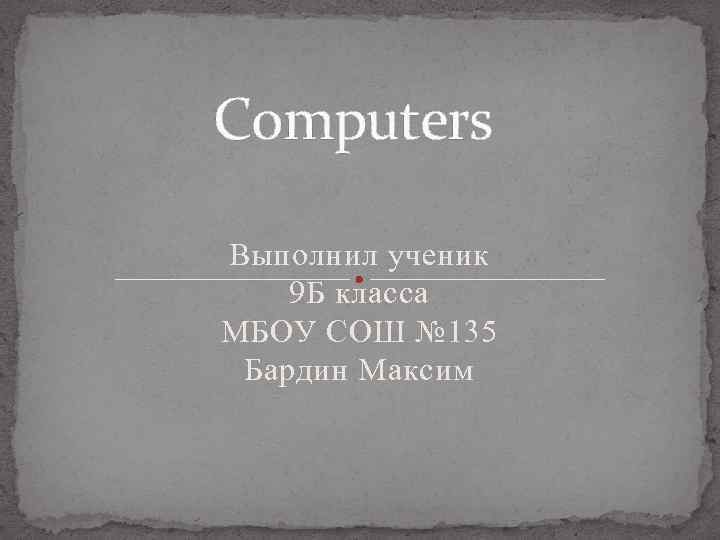 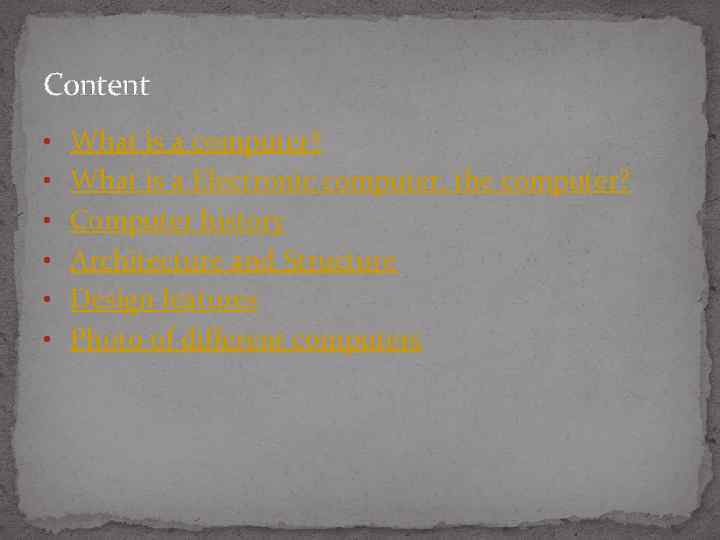 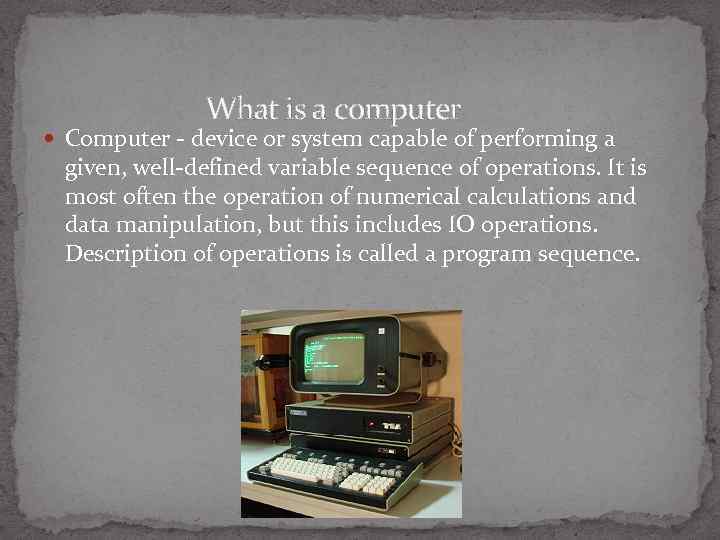 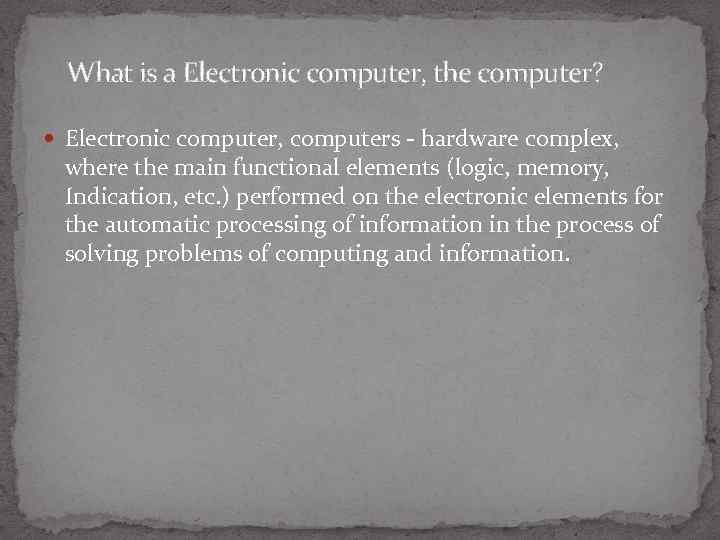 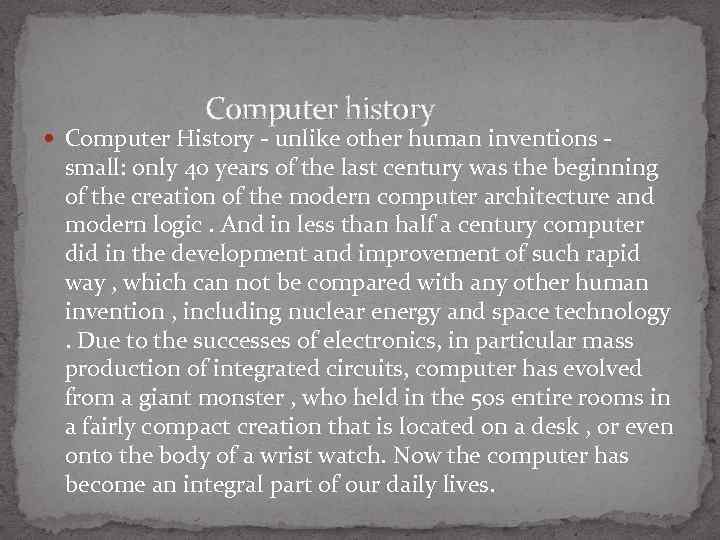 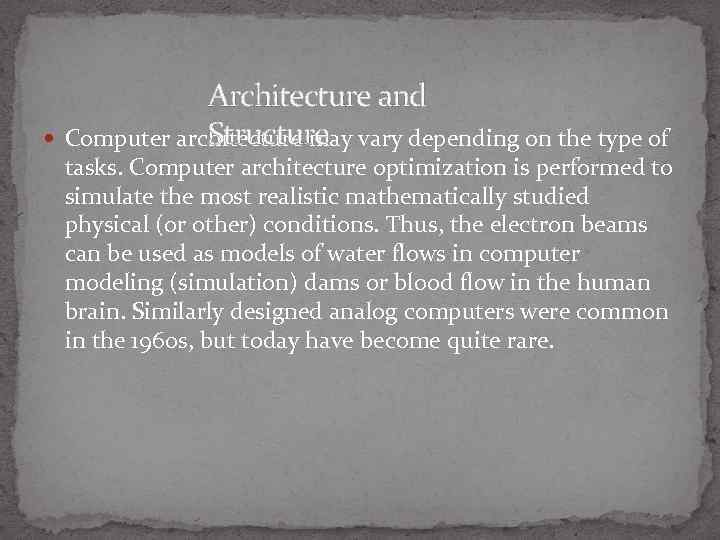 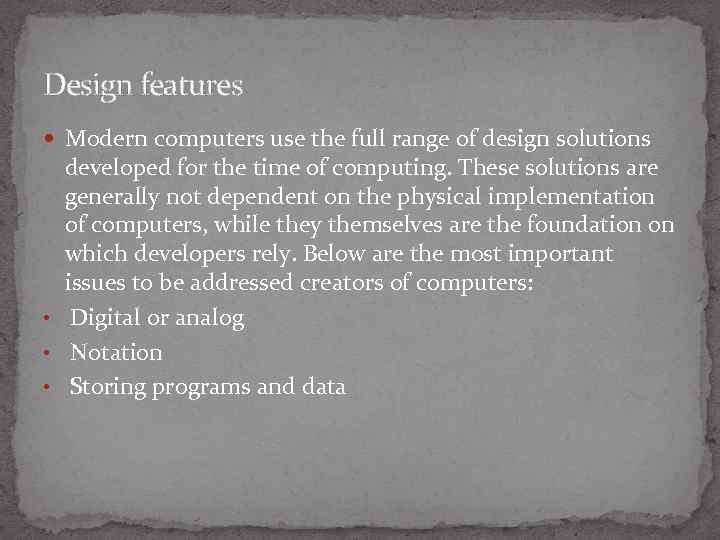 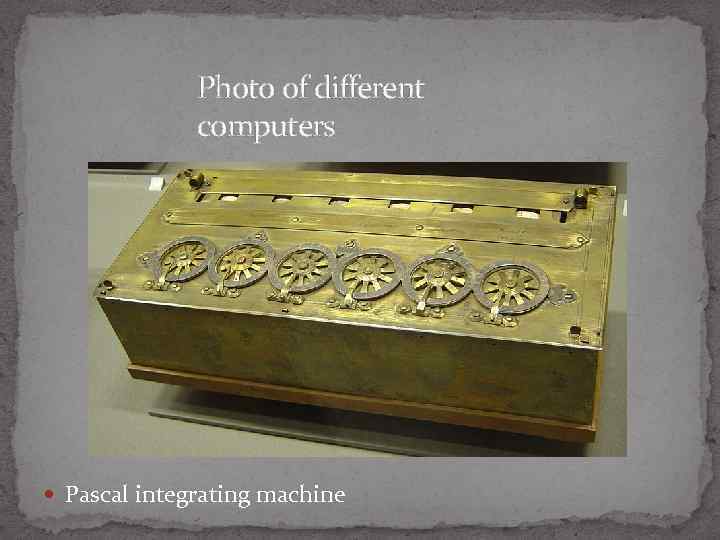 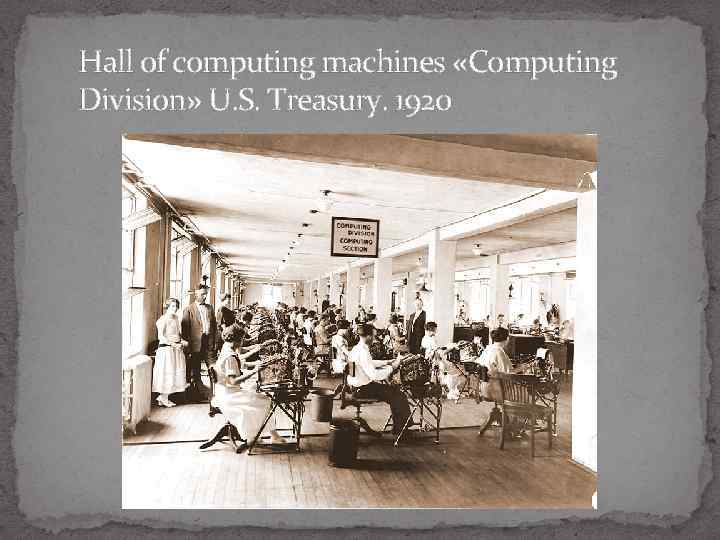 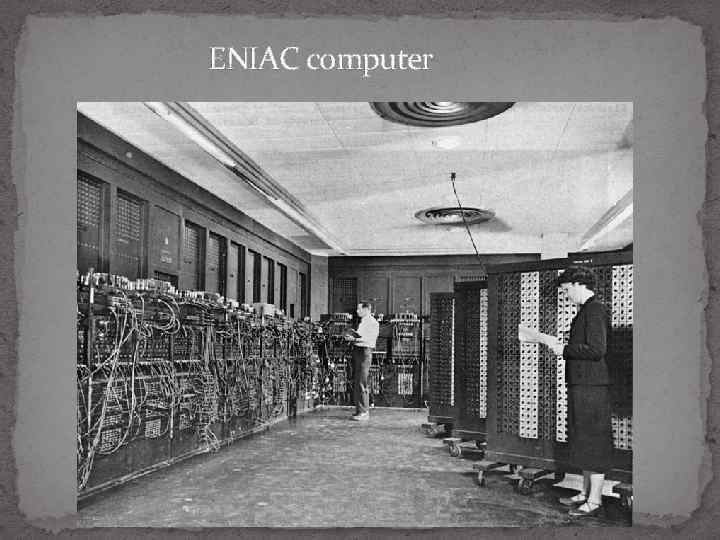 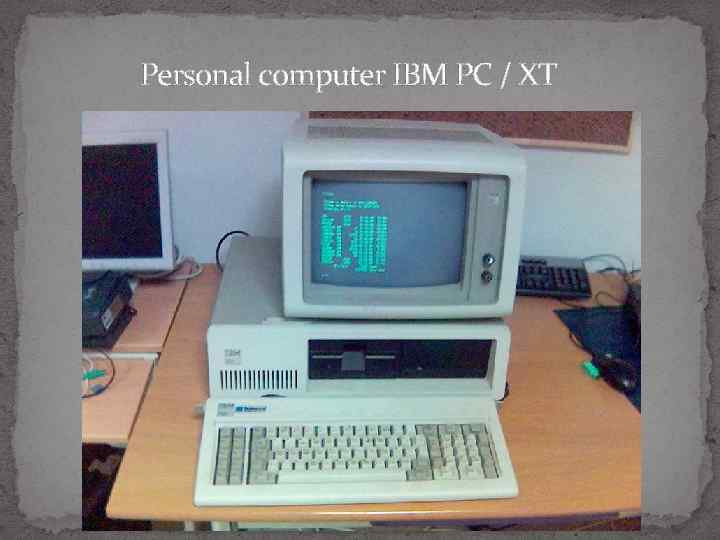 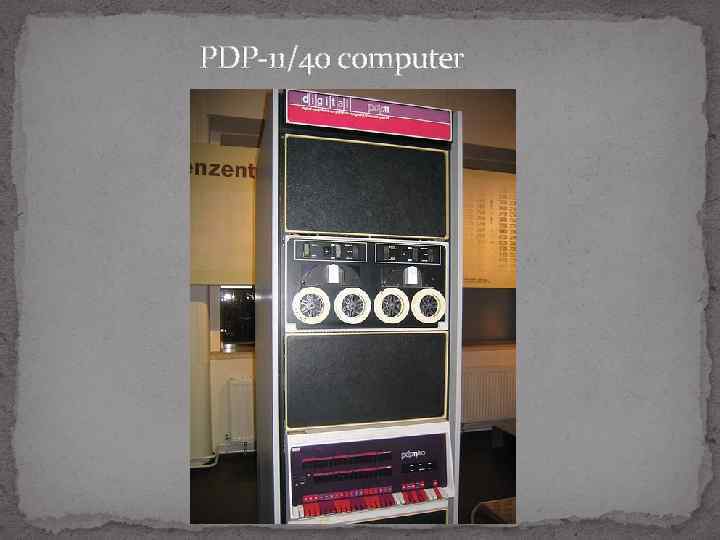 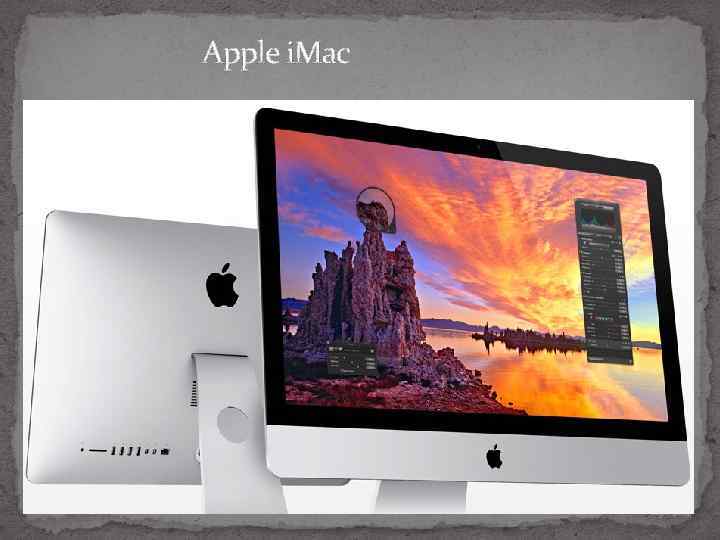 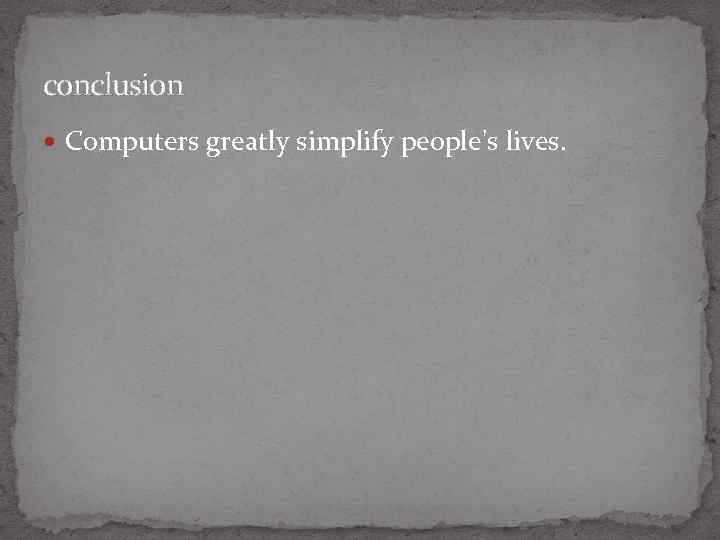 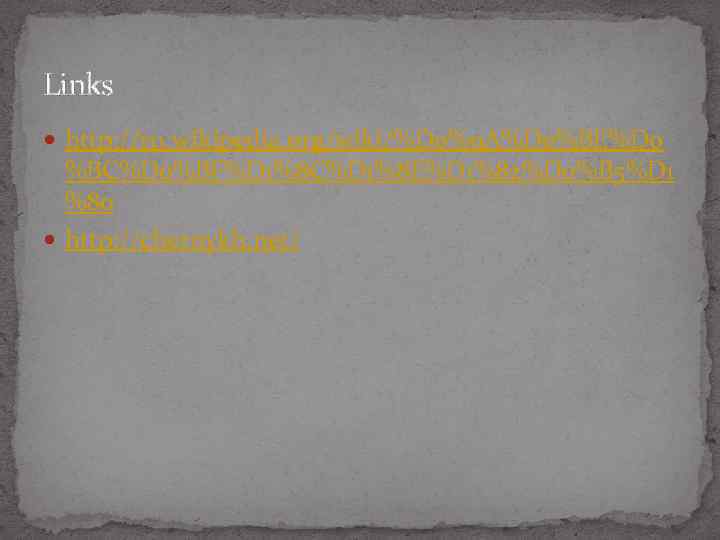 Content • What is a computer? • What is a Electronic computer, the computer? • Computer history • Architecture and Structure • Design features • Photo of different computers

What is a computer Computer - device or system capable of performing a given, well-defined variable sequence of operations. It is most often the operation of numerical calculations and data manipulation, but this includes IO operations. Description of operations is called a program sequence.

Computer history Computer History - unlike other human inventions - small: only 40 years of the last century was the beginning of the creation of the modern computer architecture and modern logic. And in less than half a century computer did in the development and improvement of such rapid way , which can not be compared with any other human invention , including nuclear energy and space technology. Due to the successes of electronics, in particular mass production of integrated circuits, computer has evolved from a giant monster , who held in the 50 s entire rooms in a fairly compact creation that is located on a desk , or even onto the body of a wrist watch. Now the computer has become an integral part of our daily lives.

Architecture and Structure Computer architecture may vary depending on the type of tasks. Computer architecture optimization is performed to simulate the most realistic mathematically studied physical (or other) conditions. Thus, the electron beams can be used as models of water flows in computer modeling (simulation) dams or blood flow in the human brain. Similarly designed analog computers were common in the 1960 s, but today have become quite rare.

Design features Modern computers use the full range of design solutions developed for the time of computing. These solutions are generally not dependent on the physical implementation of computers, while they themselves are the foundation on which developers rely. Below are the most important issues to be addressed creators of computers: • Digital or analog • Notation • Storing programs and data