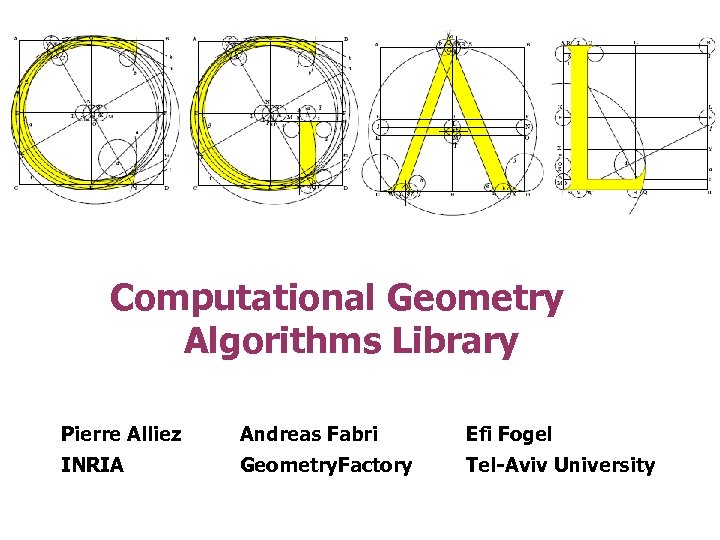 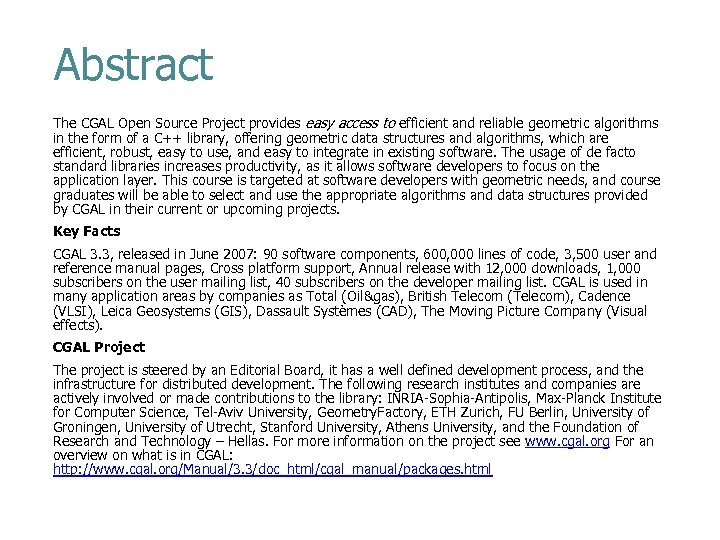 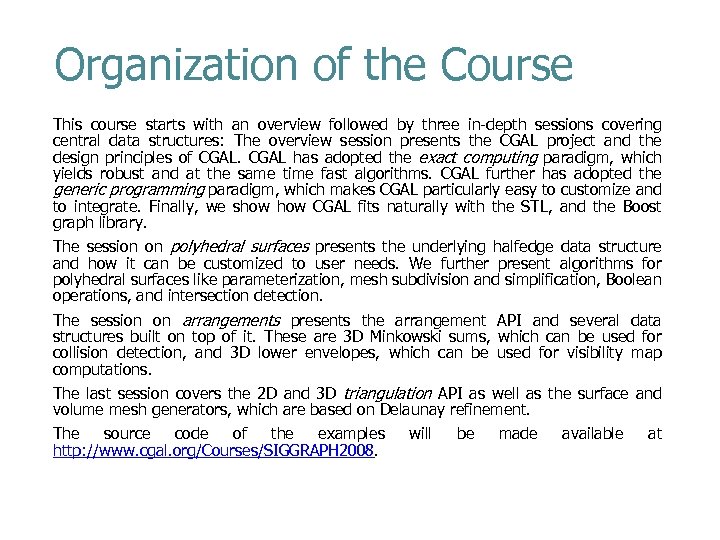 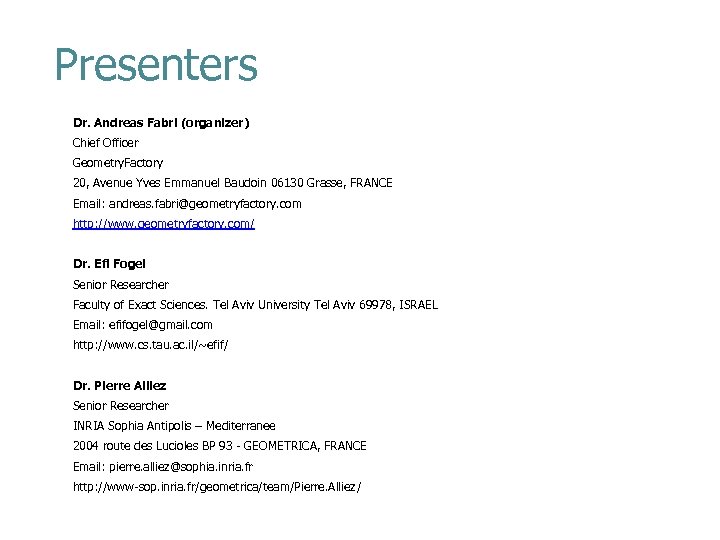 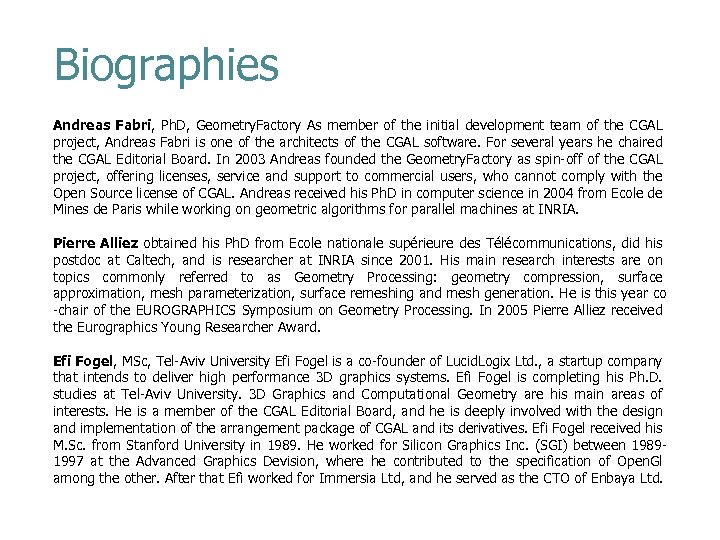 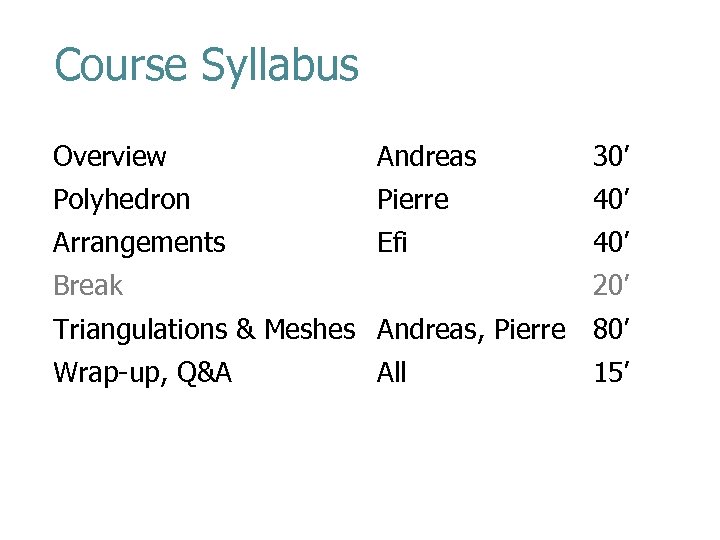 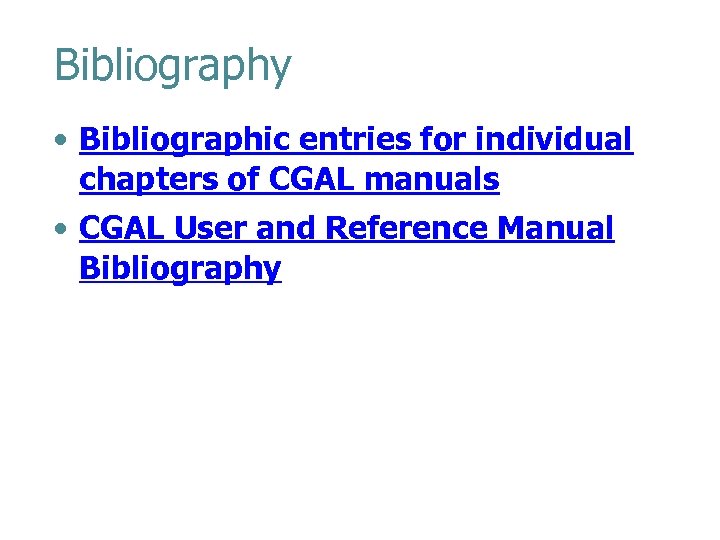 Abstract The CGAL Open Source Project provides easy access to efficient and reliable geometric algorithms in the form of a C++ library, offering geometric data structures and algorithms, which are efficient, robust, easy to use, and easy to integrate in existing software. The usage of de facto standard libraries increases productivity, as it allows software developers to focus on the application layer. This course is targeted at software developers with geometric needs, and course graduates will be able to select and use the appropriate algorithms and data structures provided by CGAL in their current or upcoming projects. Key Facts CGAL 3. 3, released in June 2007: 90 software components, 600, 000 lines of code, 3, 500 user and reference manual pages, Cross platform support, Annual release with 12, 000 downloads, 1, 000 subscribers on the user mailing list, 40 subscribers on the developer mailing list. CGAL is used in many application areas by companies as Total (Oil&gas), British Telecom (Telecom), Cadence (VLSI), Leica Geosystems (GIS), Dassault Systèmes (CAD), The Moving Picture Company (Visual effects). CGAL Project The project is steered by an Editorial Board, it has a well defined development process, and the infrastructure for distributed development. The following research institutes and companies are actively involved or made contributions to the library: INRIA-Sophia-Antipolis, Max-Planck Institute for Computer Science, Tel-Aviv University, Geometry. Factory, ETH Zurich, FU Berlin, University of Groningen, University of Utrecht, Stanford University, Athens University, and the Foundation of Research and Technology – Hellas. For more information on the project see www. cgal. org For an overview on what is in CGAL: http: //www. cgal. org/Manual/3. 3/doc_html/cgal_manual/packages. html

Organization of the Course This course starts with an overview followed by three in-depth sessions covering central data structures: The overview session presents the CGAL project and the design principles of CGAL has adopted the exact computing paradigm, which yields robust and at the same time fast algorithms. CGAL further has adopted the generic programming paradigm, which makes CGAL particularly easy to customize and to integrate. Finally, we show CGAL fits naturally with the STL, and the Boost graph library. The session on polyhedral surfaces presents the underlying halfedge data structure and how it can be customized to user needs. We further present algorithms for polyhedral surfaces like parameterization, mesh subdivision and simplification, Boolean operations, and intersection detection. The session on arrangements presents the arrangement API and several data structures built on top of it. These are 3 D Minkowski sums, which can be used for collision detection, and 3 D lower envelopes, which can be used for visibility map computations. The last session covers the 2 D and 3 D triangulation API as well as the surface and volume mesh generators, which are based on Delaunay refinement. The source code of the examples http: //www. cgal. org/Courses/SIGGRAPH 2008. will be made available at

Biographies Andreas Fabri, Ph. D, Geometry. Factory As member of the initial development team of the CGAL project, Andreas Fabri is one of the architects of the CGAL software. For several years he chaired the CGAL Editorial Board. In 2003 Andreas founded the Geometry. Factory as spin-off of the CGAL project, offering licenses, service and support to commercial users, who cannot comply with the Open Source license of CGAL. Andreas received his Ph. D in computer science in 2004 from Ecole de Mines de Paris while working on geometric algorithms for parallel machines at INRIA. Pierre Alliez obtained his Ph. D from Ecole nationale supérieure des Télécommunications, did his postdoc at Caltech, and is researcher at INRIA since 2001. His main research interests are on topics commonly referred to as Geometry Processing: geometry compression, surface approximation, mesh parameterization, surface remeshing and mesh generation. He is this year co -chair of the EUROGRAPHICS Symposium on Geometry Processing. In 2005 Pierre Alliez received the Eurographics Young Researcher Award. Efi Fogel, MSc, Tel-Aviv University Efi Fogel is a co-founder of Lucid. Logix Ltd. , a startup company that intends to deliver high performance 3 D graphics systems. Efi Fogel is completing his Ph. D. studies at Tel-Aviv University. 3 D Graphics and Computational Geometry are his main areas of interests. He is a member of the CGAL Editorial Board, and he is deeply involved with the design and implementation of the arrangement package of CGAL and its derivatives. Efi Fogel received his M. Sc. from Stanford University in 1989. He worked for Silicon Graphics Inc. (SGI) between 19891997 at the Advanced Graphics Devision, where he contributed to the specification of Open. Gl among the other. After that Efi worked for Immersia Ltd, and he served as the CTO of Enbaya Ltd.