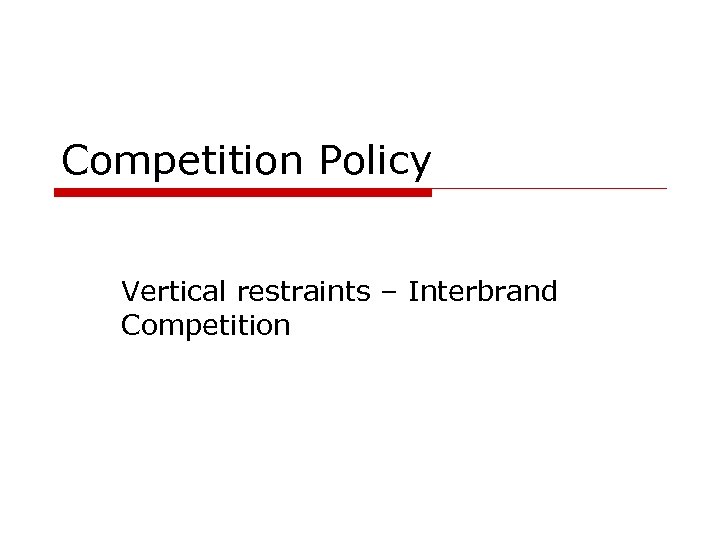 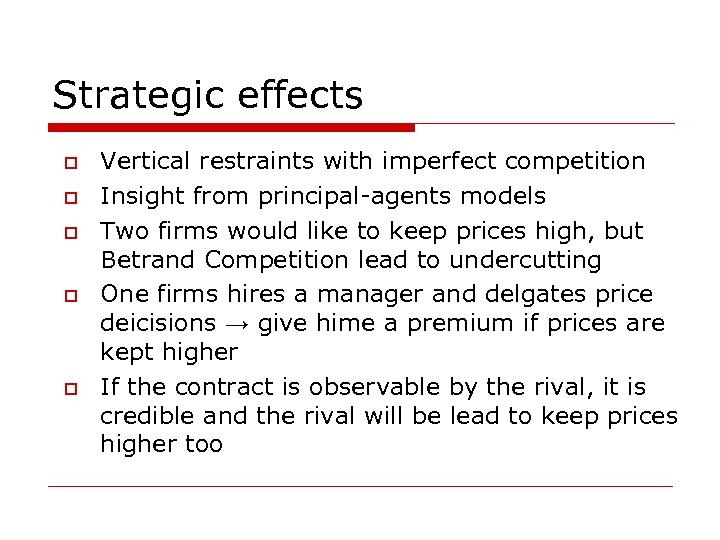 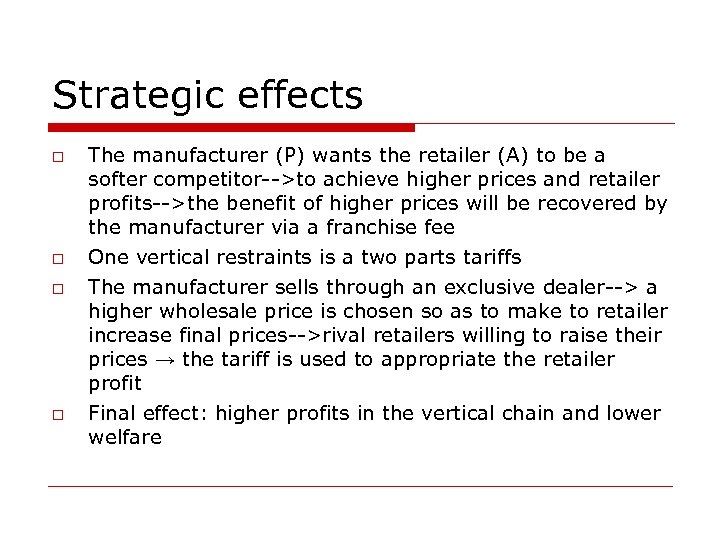 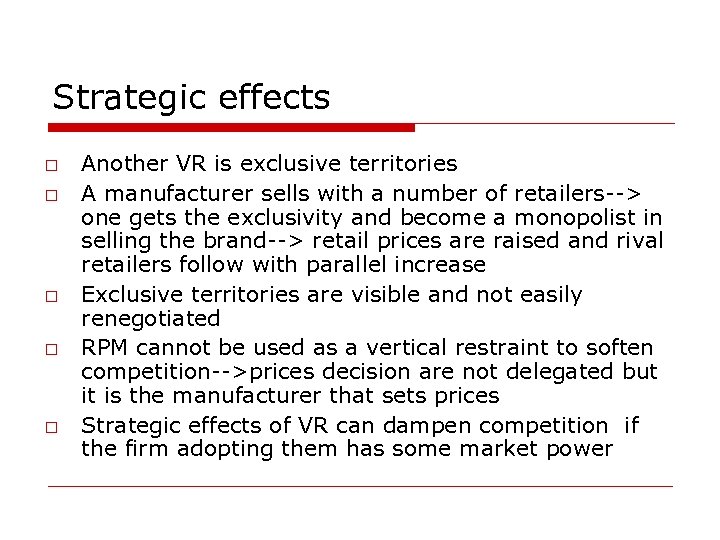 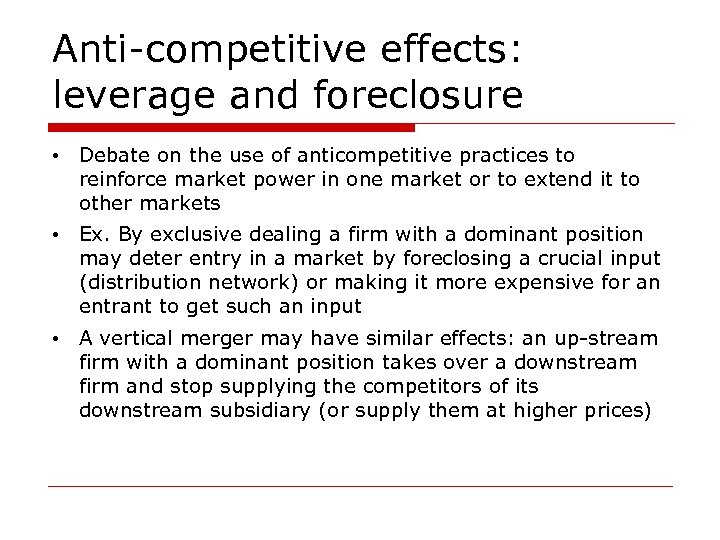 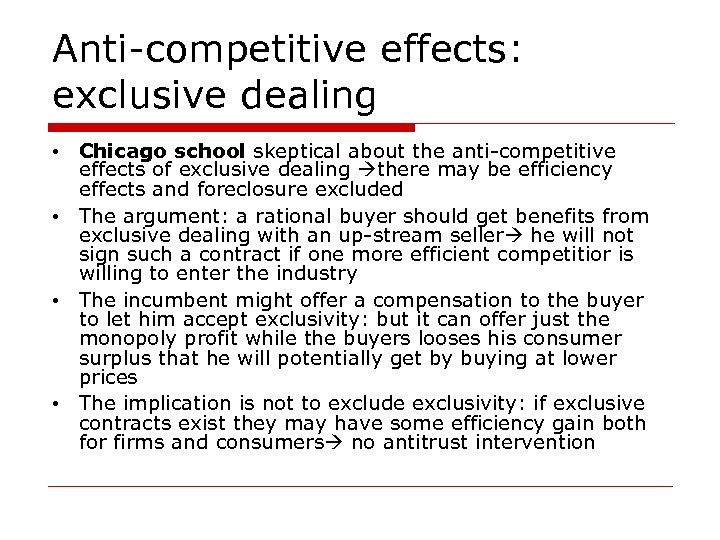 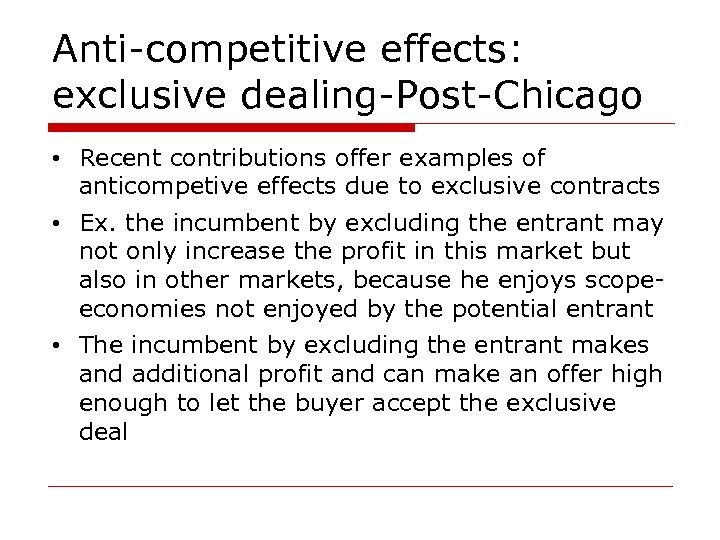 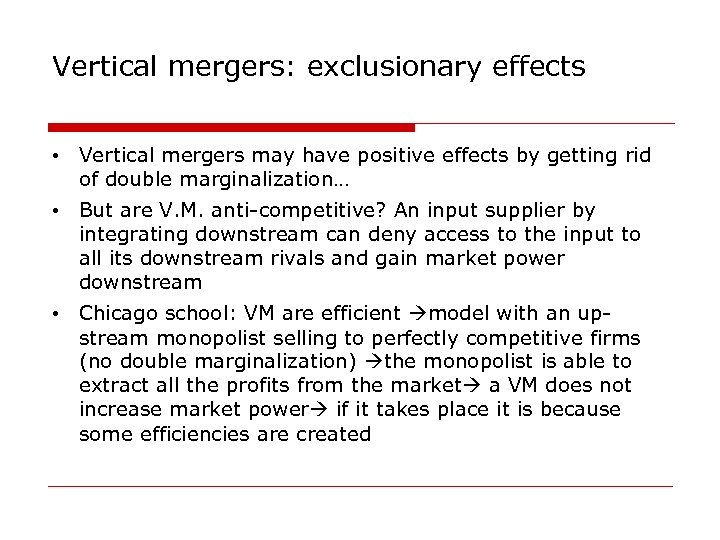 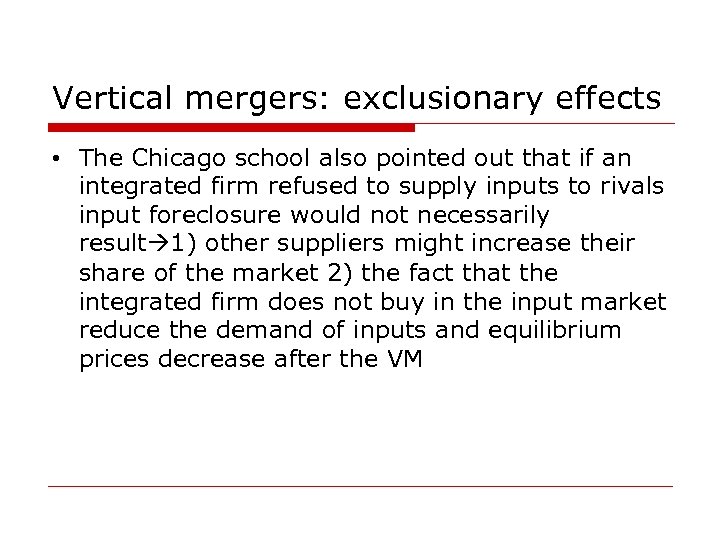 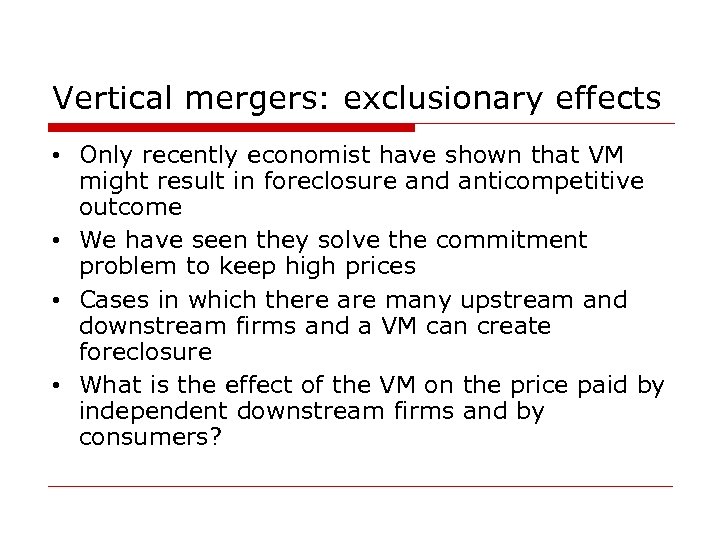 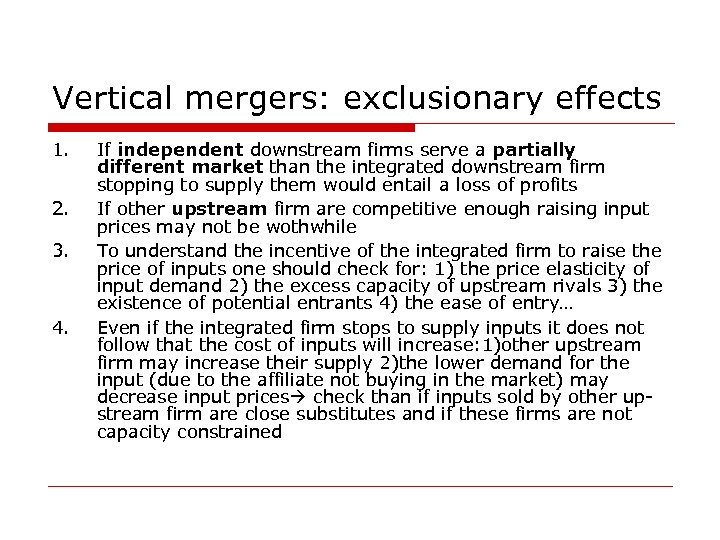 Strategic effects Vertical restraints with imperfect competition Insight from principal-agents models Two firms would like to keep prices high, but Betrand Competition lead to undercutting One firms hires a manager and delgates price deicisions → give hime a premium if prices are kept higher If the contract is observable by the rival, it is credible and the rival will be lead to keep prices higher too

Strategic effects The manufacturer (P) wants the retailer (A) to be a softer competitor-->to achieve higher prices and retailer profits-->the benefit of higher prices will be recovered by the manufacturer via a franchise fee One vertical restraints is a two parts tariffs The manufacturer sells through an exclusive dealer--> a higher wholesale price is chosen so as to make to retailer increase final prices-->rival retailers willing to raise their prices → the tariff is used to appropriate the retailer profit Final effect: higher profits in the vertical chain and lower welfare

Vertical Restraints as Collusive Devices VR can then facilitate collusion--> two more cases 1) RPM 2) Commom Agency RPM can fcilitate collusion to the extent that it increases price-observability Without RPM if there are shocks in the retail market final prices will change, with a difficulty to distinguish price reductions due change in retail conditions and cheating on the cartel Common agency: two manufacturer or more sell their goods in the final market via a common retailer-->joint profit maximisation by the retailer

Anti-competitive effects: leverage and foreclosure • Debate on the use of anticompetitive practices to reinforce market power in one market or to extend it to other markets • Ex. By exclusive dealing a firm with a dominant position may deter entry in a market by foreclosing a crucial input (distribution network) or making it more expensive for an entrant to get such an input • A vertical merger may have similar effects: an up-stream firm with a dominant position takes over a downstream firm and stop supplying the competitors of its downstream subsidiary (or supply them at higher prices)

Anti-competitive effects: exclusive dealing • Chicago school skeptical about the anti-competitive effects of exclusive dealing there may be efficiency effects and foreclosure excluded • The argument: a rational buyer should get benefits from exclusive dealing with an up-stream seller he will not sign such a contract if one more efficient competitior is willing to enter the industry • The incumbent might offer a compensation to the buyer to let him accept exclusivity: but it can offer just the monopoly profit while the buyers looses his consumer surplus that he will potentially get by buying at lower prices • The implication is not to exclude exclusivity: if exclusive contracts exist they may have some efficiency gain both for firms and consumers no antitrust intervention

Anti-competitive effects: exclusive dealing-Post-Chicago • Recent contributions offer examples of anticompetive effects due to exclusive contracts • Ex. the incumbent by excluding the entrant may not only increase the profit in this market but also in other markets, because he enjoys scopeeconomies not enjoyed by the potential entrant • The incumbent by excluding the entrant makes and additional profit and can make an offer high enough to let the buyer accept the exclusive deal

Vertical mergers: exclusionary effects • Vertical mergers may have positive effects by getting rid of double marginalization… • But are V. M. anti-competitive? An input supplier by integrating downstream can deny access to the input to all its downstream rivals and gain market power downstream • Chicago school: VM are efficient model with an upstream monopolist selling to perfectly competitive firms (no double marginalization) the monopolist is able to extract all the profits from the market a VM does not increase market power if it takes place it is because some efficiencies are created

Vertical mergers: exclusionary effects • The Chicago school also pointed out that if an integrated firm refused to supply inputs to rivals input foreclosure would not necessarily result 1) other suppliers might increase their share of the market 2) the fact that the integrated firm does not buy in the input market reduce the demand of inputs and equilibrium prices decrease after the VM

Vertical mergers: exclusionary effects • Only recently economist have shown that VM might result in foreclosure and anticompetitive outcome • We have seen they solve the commitment problem to keep high prices • Cases in which there are many upstream and downstream firms and a VM can create foreclosure • What is the effect of the VM on the price paid by independent downstream firms and by consumers?

Vertical mergers: exclusionary effects 1. 2. 3. 4. If independent downstream firms serve a partially different market than the integrated downstream firm stopping to supply them would entail a loss of profits If other upstream firm are competitive enough raising input prices may not be wothwhile To understand the incentive of the integrated firm to raise the price of inputs one should check for: 1) the price elasticity of input demand 2) the excess capacity of upstream rivals 3) the existence of potential entrants 4) the ease of entry… Even if the integrated firm stops to supply inputs it does not follow that the cost of inputs will increase: 1)other upstream firm may increase their supply 2)the lower demand for the input (due to the affiliate not buying in the market) may decrease input prices check than if inputs sold by other upstream firm are close substitutes and if these firms are not capacity constrained