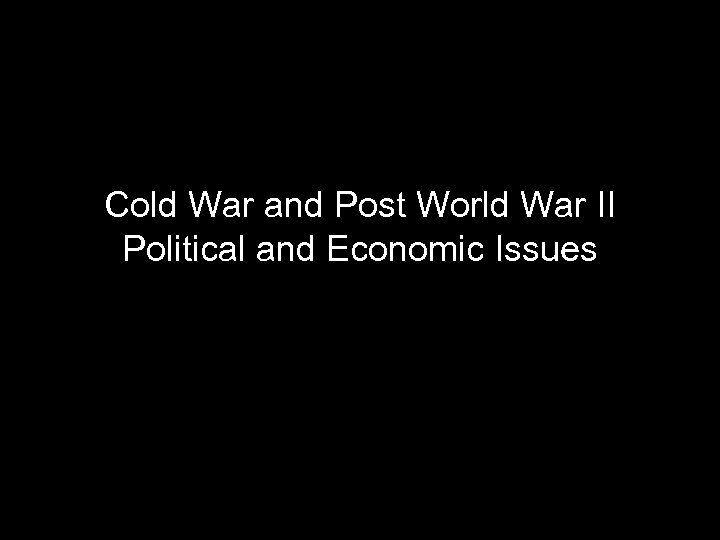 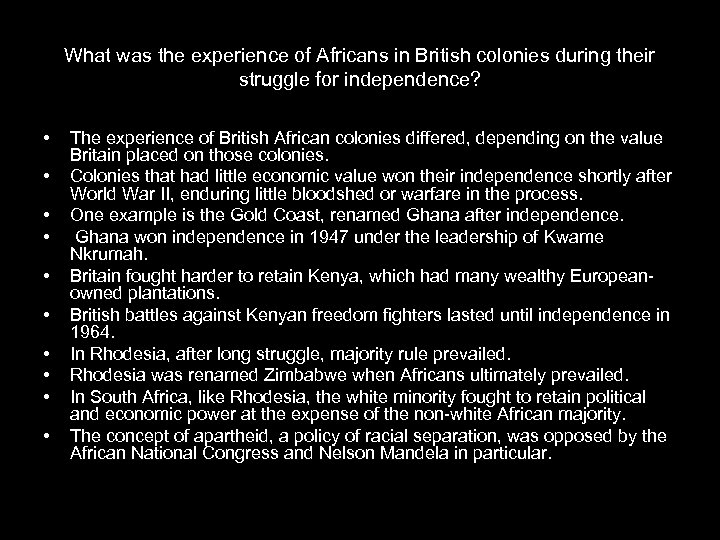 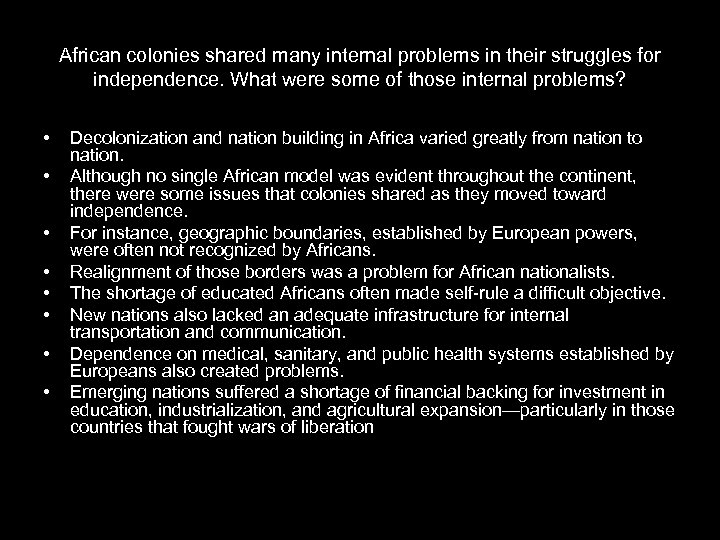 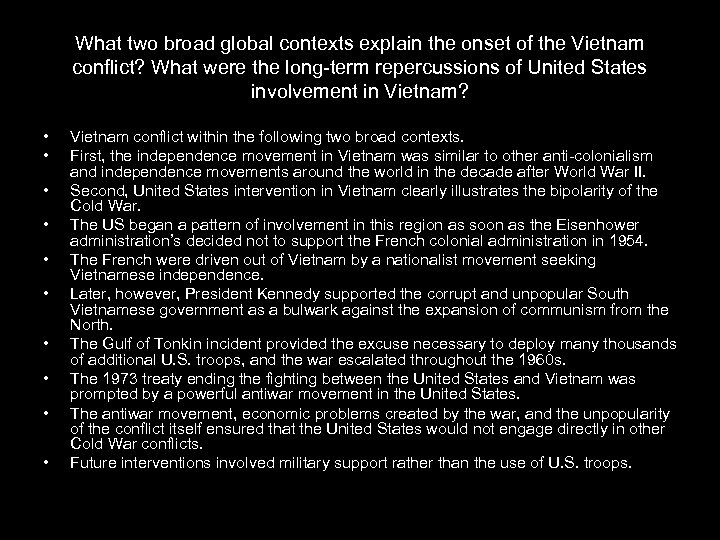 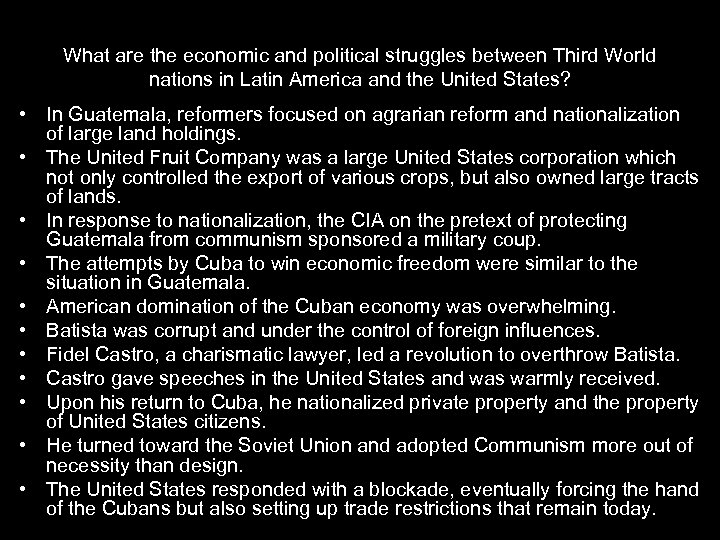 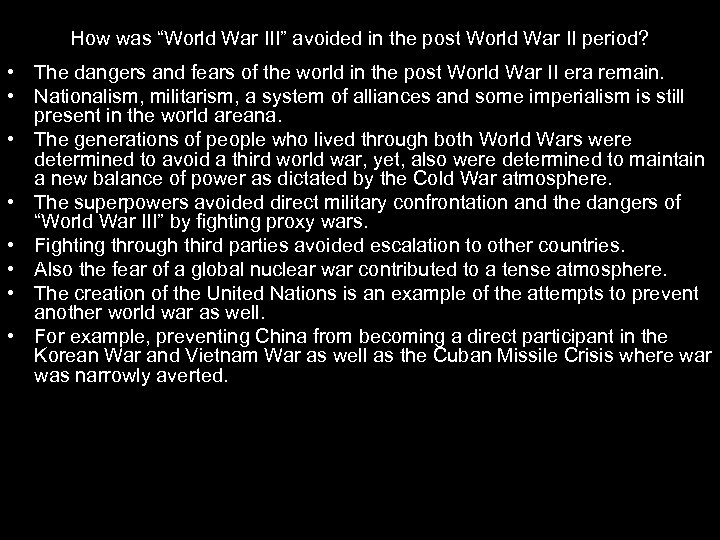 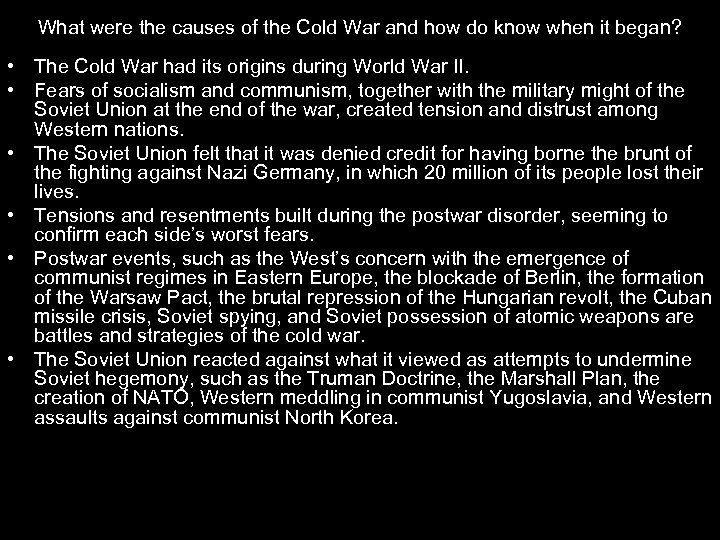 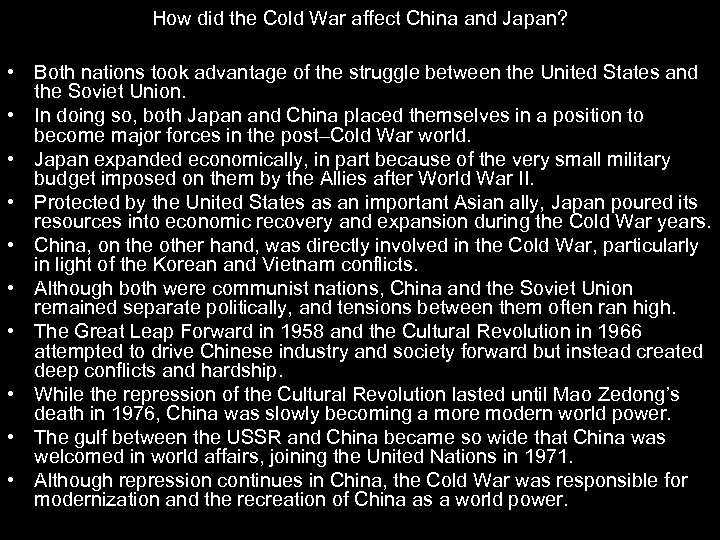 What was the experience of Africans in British colonies during their struggle for independence? • • • The experience of British African colonies differed, depending on the value Britain placed on those colonies. Colonies that had little economic value won their independence shortly after World War II, enduring little bloodshed or warfare in the process. One example is the Gold Coast, renamed Ghana after independence. Ghana won independence in 1947 under the leadership of Kwame Nkrumah. Britain fought harder to retain Kenya, which had many wealthy Europeanowned plantations. British battles against Kenyan freedom fighters lasted until independence in 1964. In Rhodesia, after long struggle, majority rule prevailed. Rhodesia was renamed Zimbabwe when Africans ultimately prevailed. In South Africa, like Rhodesia, the white minority fought to retain political and economic power at the expense of the non-white African majority. The concept of apartheid, a policy of racial separation, was opposed by the African National Congress and Nelson Mandela in particular.

African colonies shared many internal problems in their struggles for independence. What were some of those internal problems? • • Decolonization and nation building in Africa varied greatly from nation to nation. Although no single African model was evident throughout the continent, there were some issues that colonies shared as they moved toward independence. For instance, geographic boundaries, established by European powers, were often not recognized by Africans. Realignment of those borders was a problem for African nationalists. The shortage of educated Africans often made self-rule a difficult objective. New nations also lacked an adequate infrastructure for internal transportation and communication. Dependence on medical, sanitary, and public health systems established by Europeans also created problems. Emerging nations suffered a shortage of financial backing for investment in education, industrialization, and agricultural expansion—particularly in those countries that fought wars of liberation

What two broad global contexts explain the onset of the Vietnam conflict? What were the long-term repercussions of United States involvement in Vietnam? • • • Vietnam conflict within the following two broad contexts. First, the independence movement in Vietnam was similar to other anti-colonialism and independence movements around the world in the decade after World War II. Second, United States intervention in Vietnam clearly illustrates the bipolarity of the Cold War. The US began a pattern of involvement in this region as soon as the Eisenhower administration’s decided not to support the French colonial administration in 1954. The French were driven out of Vietnam by a nationalist movement seeking Vietnamese independence. Later, however, President Kennedy supported the corrupt and unpopular South Vietnamese government as a bulwark against the expansion of communism from the North. The Gulf of Tonkin incident provided the excuse necessary to deploy many thousands of additional U. S. troops, and the war escalated throughout the 1960 s. The 1973 treaty ending the fighting between the United States and Vietnam was prompted by a powerful antiwar movement in the United States. The antiwar movement, economic problems created by the war, and the unpopularity of the conflict itself ensured that the United States would not engage directly in other Cold War conflicts. Future interventions involved military support rather than the use of U. S. troops.

What are the economic and political struggles between Third World nations in Latin America and the United States? • In Guatemala, reformers focused on agrarian reform and nationalization of large land holdings. • The United Fruit Company was a large United States corporation which not only controlled the export of various crops, but also owned large tracts of lands. • In response to nationalization, the CIA on the pretext of protecting Guatemala from communism sponsored a military coup. • The attempts by Cuba to win economic freedom were similar to the situation in Guatemala. • American domination of the Cuban economy was overwhelming. • Batista was corrupt and under the control of foreign influences. • Fidel Castro, a charismatic lawyer, led a revolution to overthrow Batista. • Castro gave speeches in the United States and was warmly received. • Upon his return to Cuba, he nationalized private property and the property of United States citizens. • He turned toward the Soviet Union and adopted Communism more out of necessity than design. • The United States responded with a blockade, eventually forcing the hand of the Cubans but also setting up trade restrictions that remain today.

How was “World War III” avoided in the post World War II period? • The dangers and fears of the world in the post World War II era remain. • Nationalism, militarism, a system of alliances and some imperialism is still present in the world areana. • The generations of people who lived through both World Wars were determined to avoid a third world war, yet, also were determined to maintain a new balance of power as dictated by the Cold War atmosphere. • The superpowers avoided direct military confrontation and the dangers of “World War III” by fighting proxy wars. • Fighting through third parties avoided escalation to other countries. • Also the fear of a global nuclear war contributed to a tense atmosphere. • The creation of the United Nations is an example of the attempts to prevent another world war as well. • For example, preventing China from becoming a direct participant in the Korean War and Vietnam War as well as the Cuban Missile Crisis where war was narrowly averted.

What were the causes of the Cold War and how do know when it began? • The Cold War had its origins during World War II. • Fears of socialism and communism, together with the military might of the Soviet Union at the end of the war, created tension and distrust among Western nations. • The Soviet Union felt that it was denied credit for having borne the brunt of the fighting against Nazi Germany, in which 20 million of its people lost their lives. • Tensions and resentments built during the postwar disorder, seeming to confirm each side’s worst fears. • Postwar events, such as the West’s concern with the emergence of communist regimes in Eastern Europe, the blockade of Berlin, the formation of the Warsaw Pact, the brutal repression of the Hungarian revolt, the Cuban missile crisis, Soviet spying, and Soviet possession of atomic weapons are battles and strategies of the cold war. • The Soviet Union reacted against what it viewed as attempts to undermine Soviet hegemony, such as the Truman Doctrine, the Marshall Plan, the creation of NATO, Western meddling in communist Yugoslavia, and Western assaults against communist North Korea.

How (in what way) did decolonization and nation building in South & Southeast Asia occur? • Japanese demonstrations of European weaknesses during World War II played an important role in Southeast Asian nation building. • Many nations won their independence in the years immediately following the war as the Japanese disrupted the colonial administration and their exit from the region left a vacuum. • British India became independent in 1947. Mainly because of regional and religious differences, the Indian colony achieved independence as two separate nations—India and Pakistan. – Bangladesh split from Pakistan in 1974, revealing further divisions. • The British colonies of Burma and the Malay Federation became independent in 1948, followed by Singapore in 1950. • In Indonesia, Sukarno fought Dutch attempts to reassert control after World War II, and Indonesia became independent in 1949. • France also struggled in vain to keep its colony of French Indochina. Opposition to the French was led by Ho Chi Minh, who controlled the Communist Party in Vietnam. • French attempts to retain the colony ended in failure at Dienbienphu in 1954, eventually drawing the United States into the conflict.

• • • Describe the political situation in the Middle East after World War II, with particular emphasis on the region’s production of oil. The Arab struggle with Israel is the foundation for many decisions and activities in the Middle East. Originally encouraged by the Balfour Declaration decades before, Jewish settlement in Palestine increased tremendously after World War II and the Holocaust. Both Israel and the Arab states participated in the independence movements that swept the world after World War II. Nations that had been nominally independent but were actually under British, French, or American control became autonomous in those years as well. Many of those new nations rallied around the Palestinian people displaced by Israel, which became independent in 1948. Still, the Arab-Israeli conflict would have remained a regional issue if it had not been for the presence of oil. The region’s huge oil reserves were not effectively exploited until after World War II, which also coincided with huge new demands for petroleum. Later, oil-producing nations won greater control and profits from Western oil companies by threatening to nationalize the oil fields. In 1960, they created OPEC as a political and economic instrument to further their interests. The continuing conflicts between the Arabs and Israelis complicated these matters enormously. After the oil crisis in 1974, prices spiraled upward, bringing great wealth and power to oil-producing nations.

How did the Cold War affect China and Japan? • Both nations took advantage of the struggle between the United States and the Soviet Union. • In doing so, both Japan and China placed themselves in a position to become major forces in the post–Cold War world. • Japan expanded economically, in part because of the very small military budget imposed on them by the Allies after World War II. • Protected by the United States as an important Asian ally, Japan poured its resources into economic recovery and expansion during the Cold War years. • China, on the other hand, was directly involved in the Cold War, particularly in light of the Korean and Vietnam conflicts. • Although both were communist nations, China and the Soviet Union remained separate politically, and tensions between them often ran high. • The Great Leap Forward in 1958 and the Cultural Revolution in 1966 attempted to drive Chinese industry and society forward but instead created deep conflicts and hardship. • While the repression of the Cultural Revolution lasted until Mao Zedong’s death in 1976, China was slowly becoming a more modern world power. • The gulf between the USSR and China became so wide that China was welcomed in world affairs, joining the United Nations in 1971. • Although repression continues in China, the Cold War was responsible for modernization and the recreation of China as a world power.