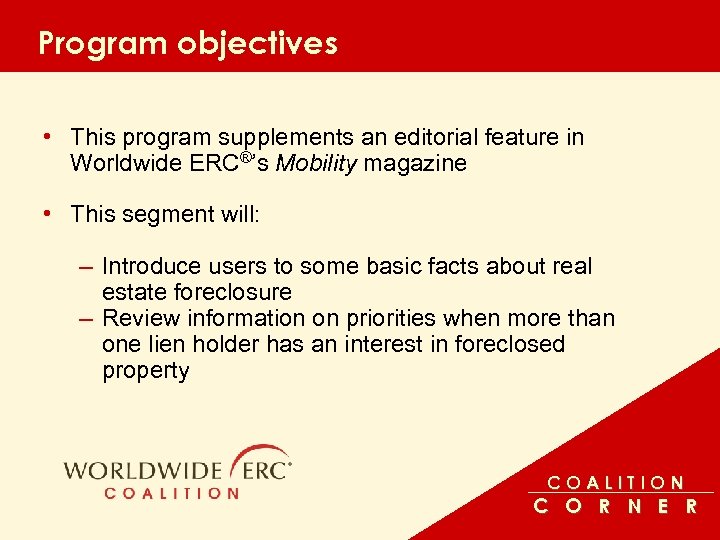 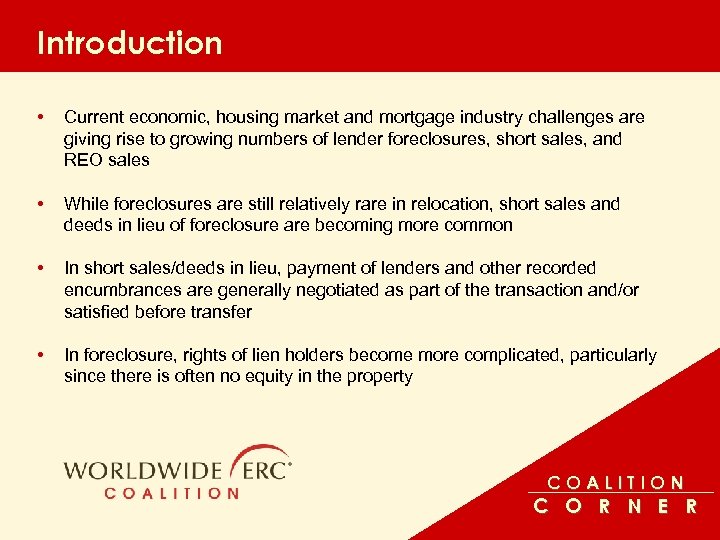 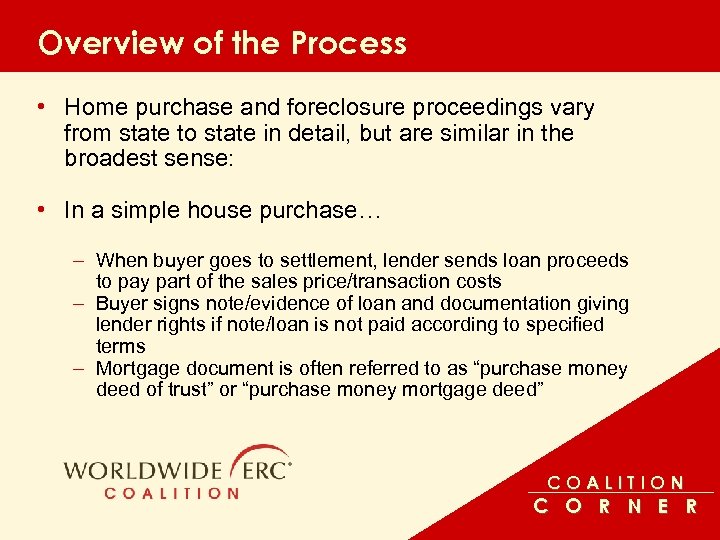 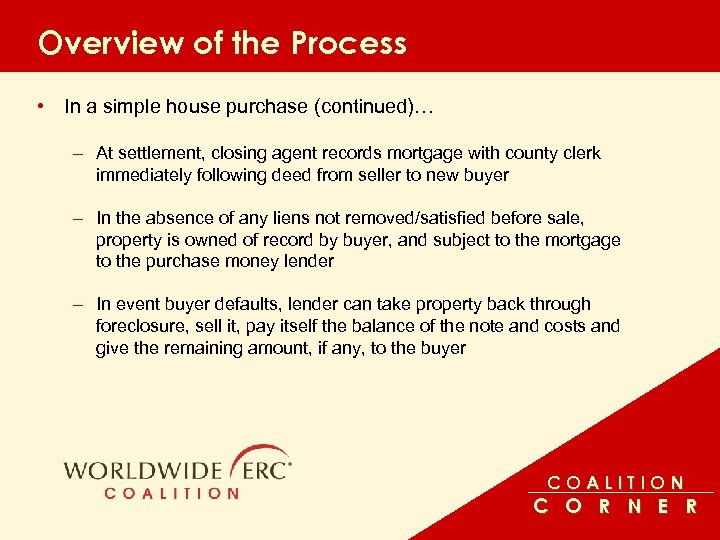 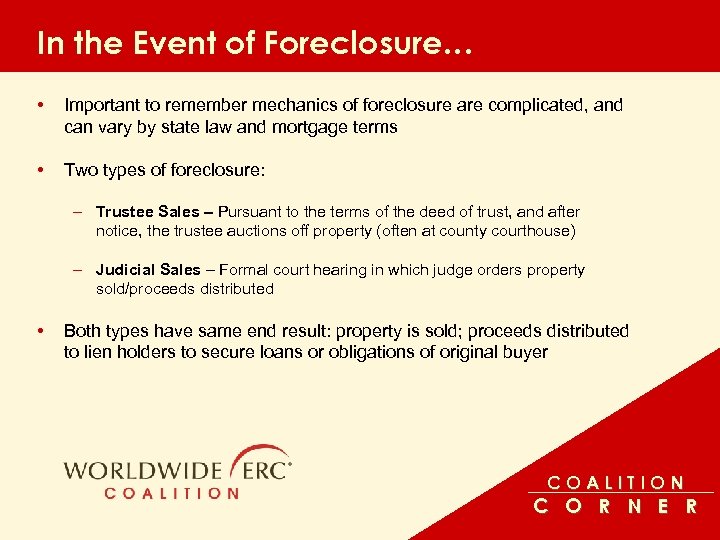 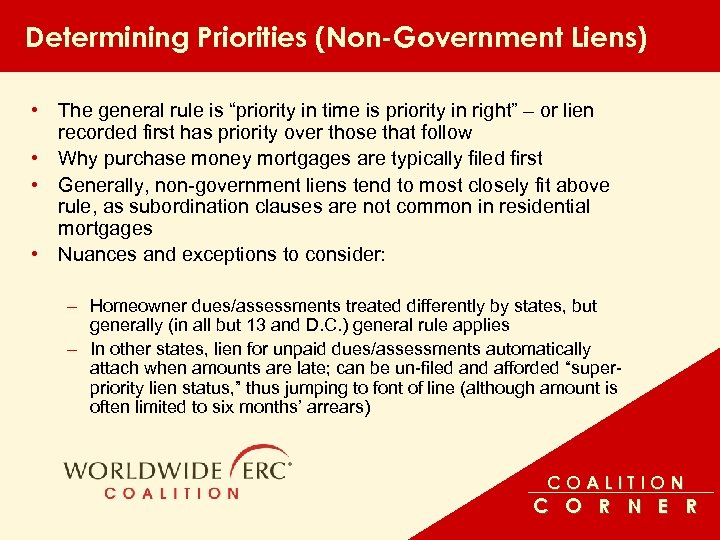 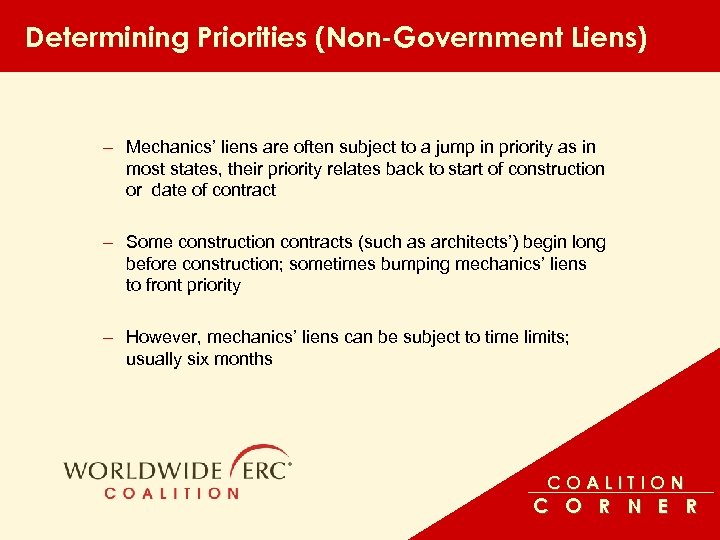 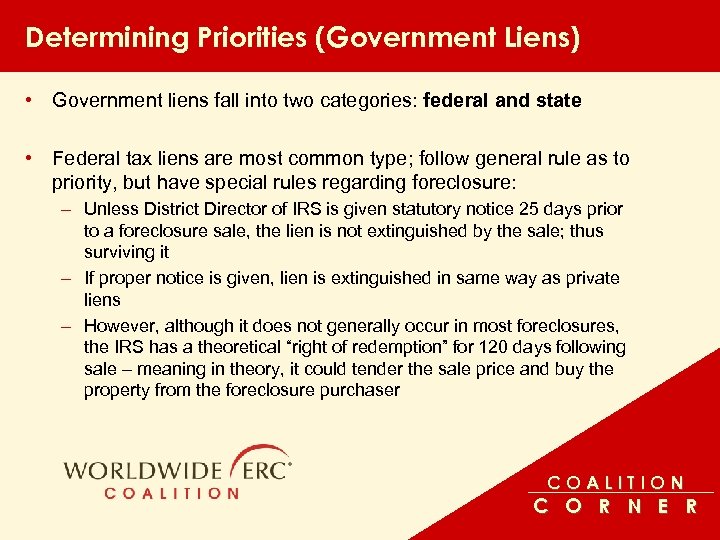 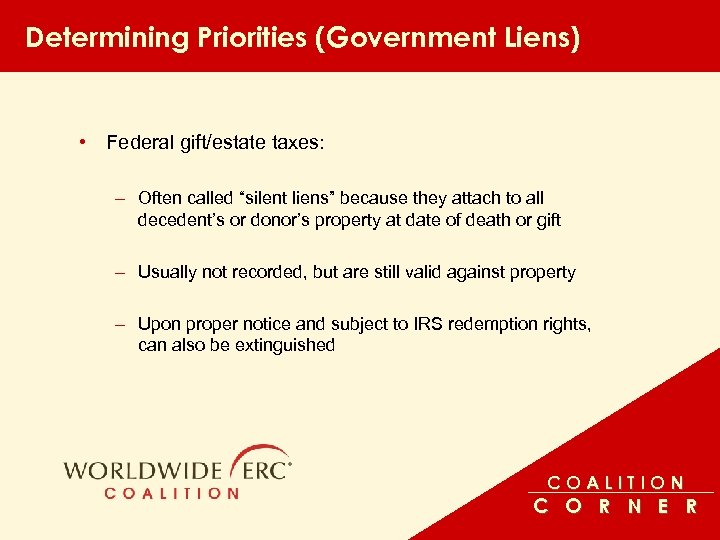 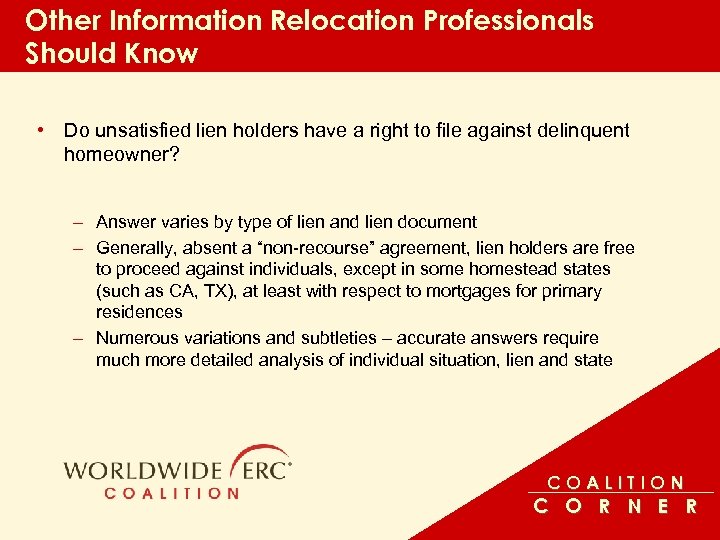 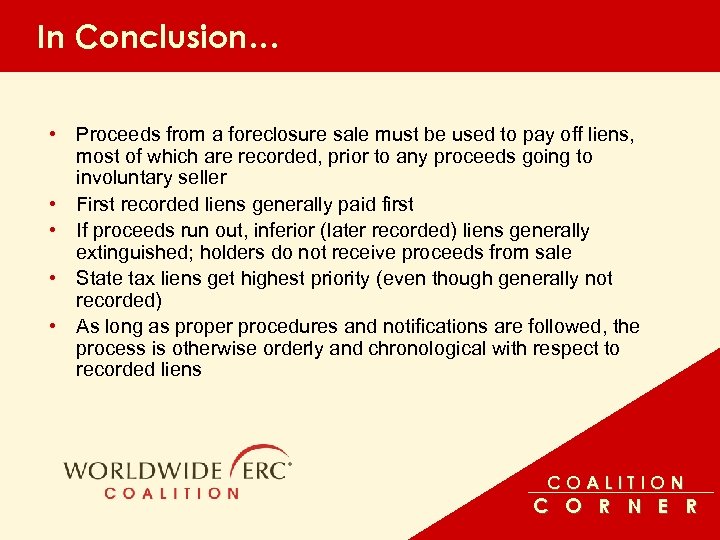 Program objectives • This program supplements an editorial feature in Worldwide ERC®’s Mobility magazine • This segment will: – Introduce users to some basic facts about real estate foreclosure – Review information on priorities when more than one lien holder has an interest in foreclosed property COALITION C O R N E R

Introduction • Current economic, housing market and mortgage industry challenges are giving rise to growing numbers of lender foreclosures, short sales, and REO sales • While foreclosures are still relatively rare in relocation, short sales and deeds in lieu of foreclosure are becoming more common • In short sales/deeds in lieu, payment of lenders and other recorded encumbrances are generally negotiated as part of the transaction and/or satisfied before transfer • In foreclosure, rights of lien holders become more complicated, particularly since there is often no equity in the property COALITION C O R N E R

Overview of the Process • Home purchase and foreclosure proceedings vary from state to state in detail, but are similar in the broadest sense: • In a simple house purchase… – When buyer goes to settlement, lender sends loan proceeds to pay part of the sales price/transaction costs – Buyer signs note/evidence of loan and documentation giving lender rights if note/loan is not paid according to specified terms – Mortgage document is often referred to as “purchase money deed of trust” or “purchase money mortgage deed” COALITION C O R N E R

Overview of the Process • In a simple house purchase (continued)… – At settlement, closing agent records mortgage with county clerk immediately following deed from seller to new buyer – In the absence of any liens not removed/satisfied before sale, property is owned of record by buyer, and subject to the mortgage to the purchase money lender – In event buyer defaults, lender can take property back through foreclosure, sell it, pay itself the balance of the note and costs and give the remaining amount, if any, to the buyer COALITION C O R N E R

In the Event of Foreclosure… • Important to remember mechanics of foreclosure are complicated, and can vary by state law and mortgage terms • Two types of foreclosure: – Trustee Sales – Pursuant to the terms of the deed of trust, and after notice, the trustee auctions off property (often at county courthouse) – Judicial Sales – Formal court hearing in which judge orders property sold/proceeds distributed • Both types have same end result: property is sold; proceeds distributed to lien holders to secure loans or obligations of original buyer COALITION C O R N E R

If More Than One Lien Holder Exists… • Typically, purchase money mortgage is first lien filed on property • In many cases, there are other liens, including home equity loans or lines of credit, second, or sometimes even third or more mortgages • In some cases, homeowner dues, assessments or association fees (particularly with condos and PUDs) may also attach • If construction was done on the home, there may be mechanics’ liens • There may be federal or state liens placed on the property for unpaid taxes • Further complications occur if, as in the vast majority of foreclosures, proceeds of sale are insufficient to pay off all recorded liens COALITION C O R N E R

How Shortfalls Are Resolved • Determining who gets what portion of the proceeds requires analysis of the “priority” of recorded liens • Generally, each lien is paid off in full as its priority arises • If proceeds are insufficient, liens with lower priority get nothing and are “extinguished, ” (i. e. , no longer apply), which enables foreclosure buyer to obtain property free of liens in most circumstances COALITION C O R N E R

Determining Priorities (Non-Government Liens) • The general rule is “priority in time is priority in right” – or lien recorded first has priority over those that follow • Why purchase money mortgages are typically filed first • Generally, non-government liens tend to most closely fit above rule, as subordination clauses are not common in residential mortgages • Nuances and exceptions to consider: – Homeowner dues/assessments treated differently by states, but generally (in all but 13 and D. C. ) general rule applies – In other states, lien for unpaid dues/assessments automatically attach when amounts are late; can be un-filed and afforded “superpriority lien status, ” thus jumping to font of line (although amount is often limited to six months’ arrears) COALITION C O R N E R

Determining Priorities (Government Liens) • Government liens fall into two categories: federal and state • Federal tax liens are most common type; follow general rule as to priority, but have special rules regarding foreclosure: – Unless District Director of IRS is given statutory notice 25 days prior to a foreclosure sale, the lien is not extinguished by the sale; thus surviving it – If proper notice is given, lien is extinguished in same way as private liens – However, although it does not generally occur in most foreclosures, the IRS has a theoretical “right of redemption” for 120 days following sale – meaning in theory, it could tender the sale price and buy the property from the foreclosure purchaser COALITION C O R N E R

Determining Priorities (Government Liens) • Federal gift/estate taxes: – Often called “silent liens” because they attach to all decedent’s or donor’s property at date of death or gift – Usually not recorded, but are still valid against property – Upon proper notice and subject to IRS redemption rights, can also be extinguished COALITION C O R N E R

Determining Priorities (Government Liens) • State liens: – Can arise from variety of unpaid obligations, most common of which are real estate taxes and assessments – State property taxes (including county, municipal and local and/or special taxing districts) generally attach at the first of each year and are not typically recorded – Given automatic priority over other liens, thus making unpaid property taxes superior to other liens – About 32 states will sell liens in form of state tax lien certificate; giving purchaser right to collect tax by foreclosure if necessary COALITION C O R N E R

Other Information Relocation Professionals Should Know • Do unsatisfied lien holders have a right to file against delinquent homeowner? – Answer varies by type of lien and lien document – Generally, absent a “non-recourse” agreement, lien holders are free to proceed against individuals, except in some homestead states (such as CA, TX), at least with respect to mortgages for primary residences – Numerous variations and subtleties – accurate answers require much more detailed analysis of individual situation, lien and state COALITION C O R N E R

In Conclusion… • Proceeds from a foreclosure sale must be used to pay off liens, most of which are recorded, prior to any proceeds going to involuntary seller • First recorded liens generally paid first • If proceeds run out, inferior (later recorded) liens generally extinguished; holders do not receive proceeds from sale • State tax liens get highest priority (even though generally not recorded) • As long as proper procedures and notifications are followed, the process is otherwise orderly and chronological with respect to recorded liens COALITION C O R N E R