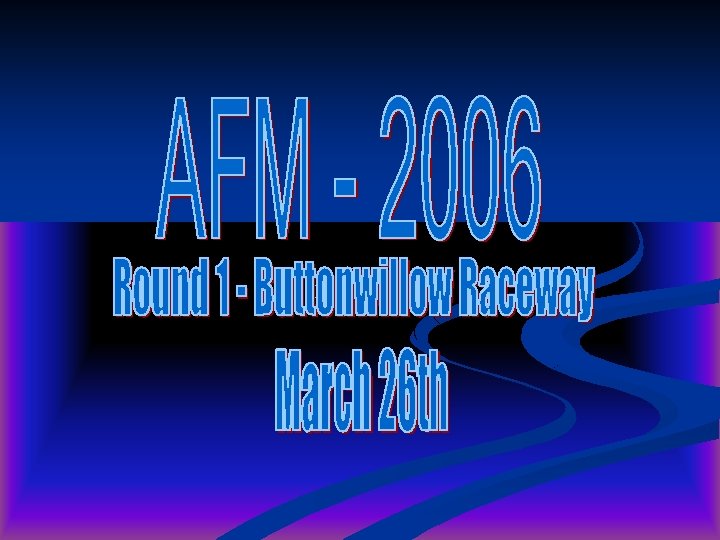 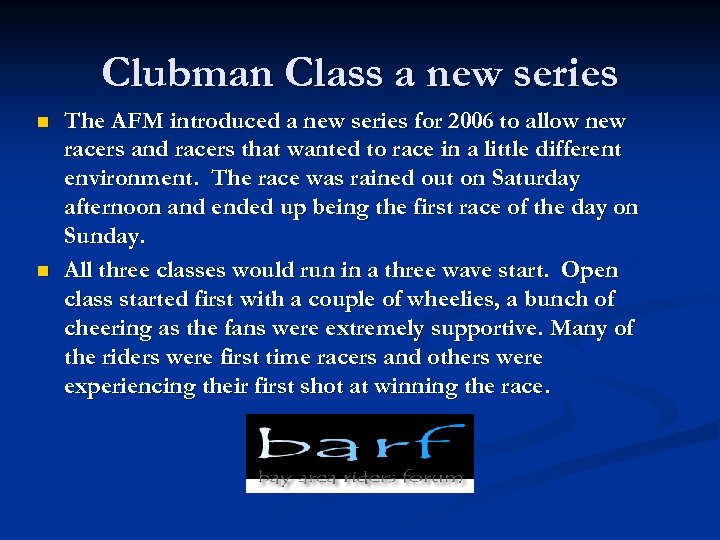 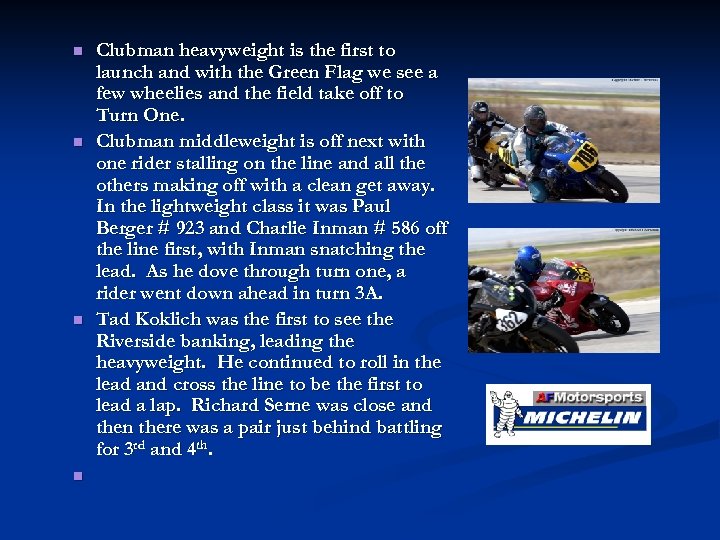 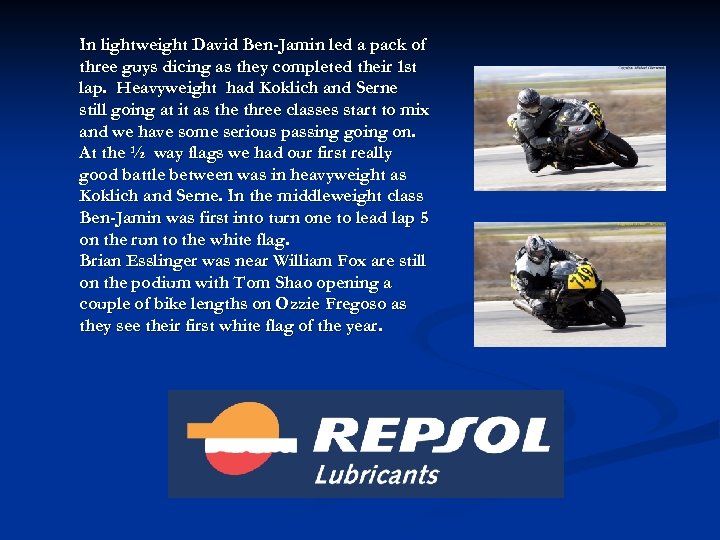 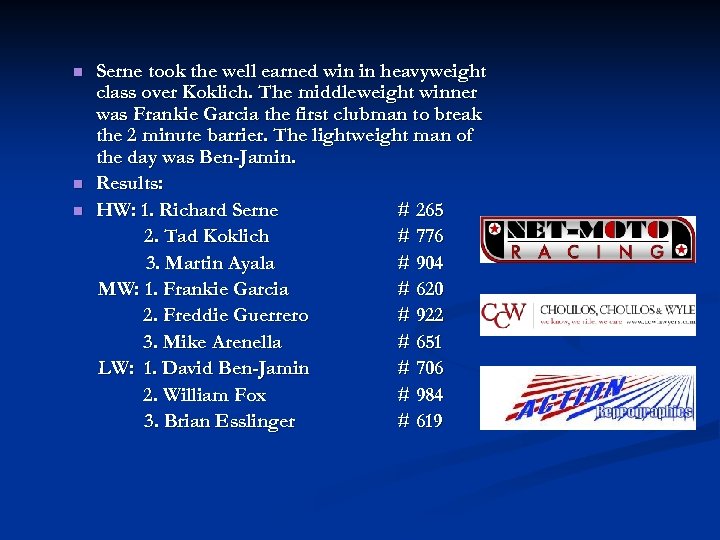 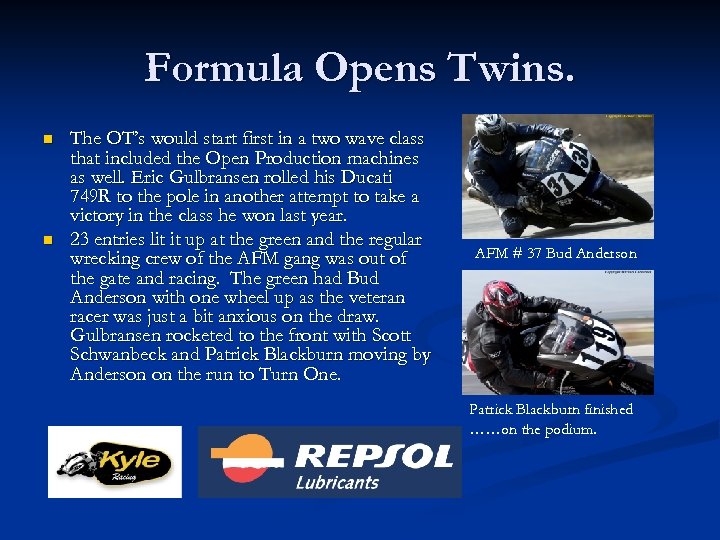 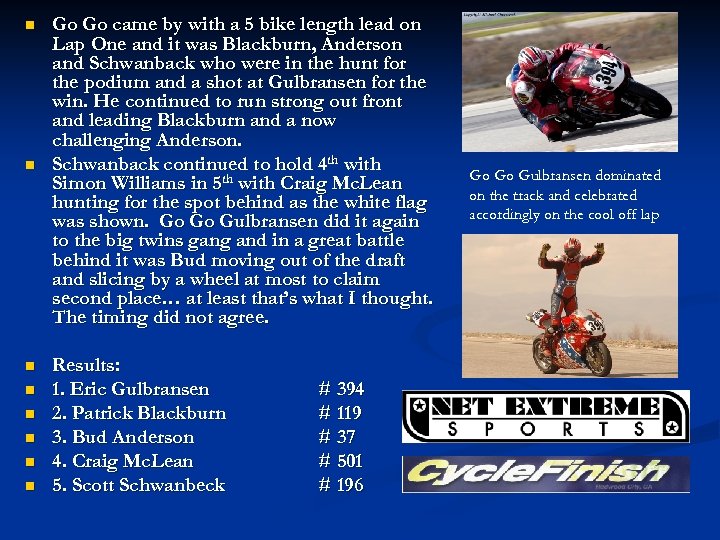 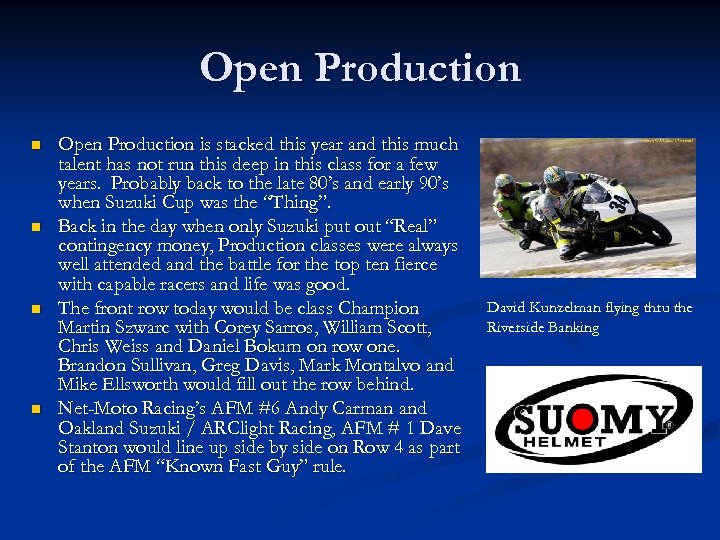 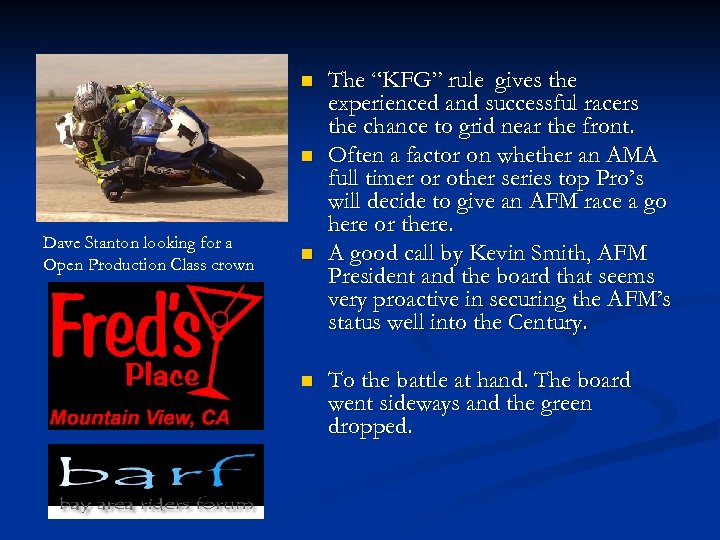 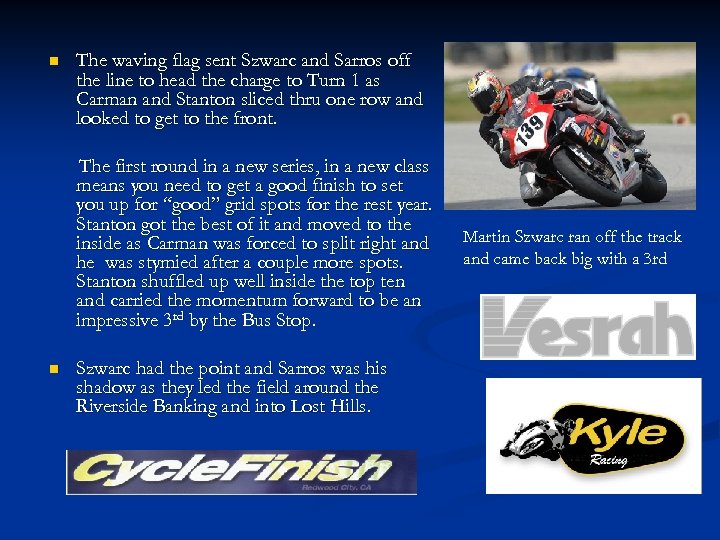 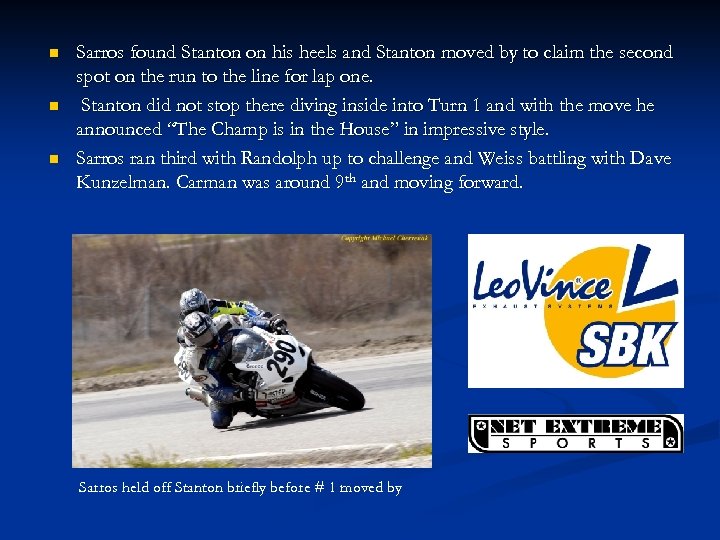 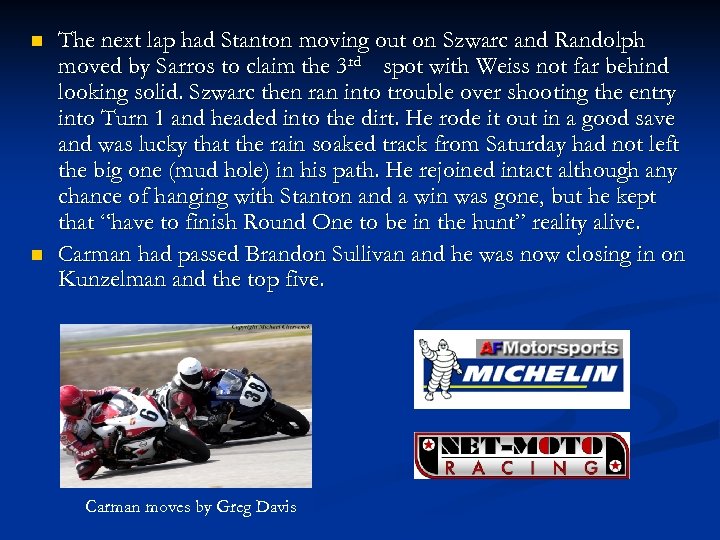 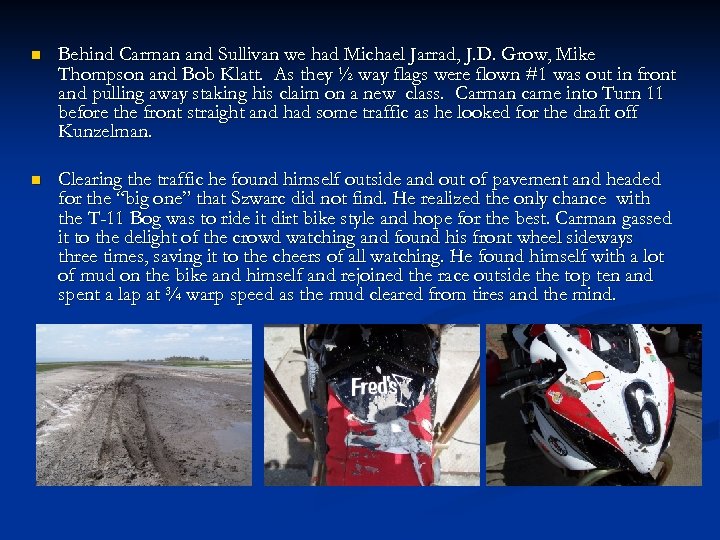 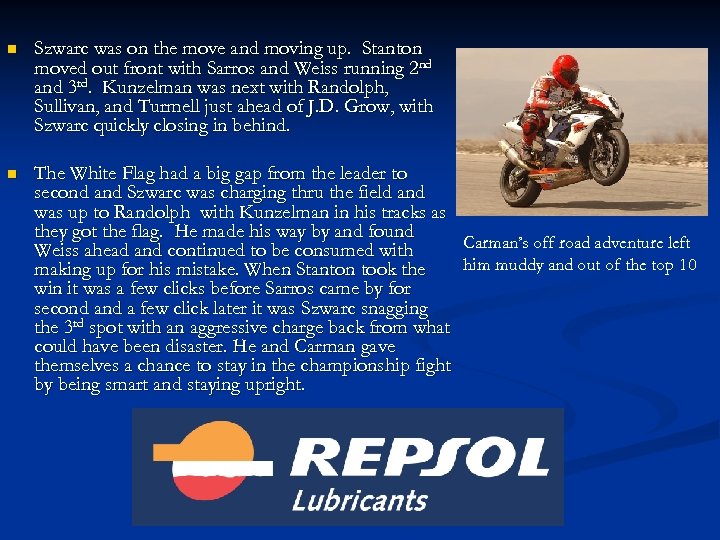 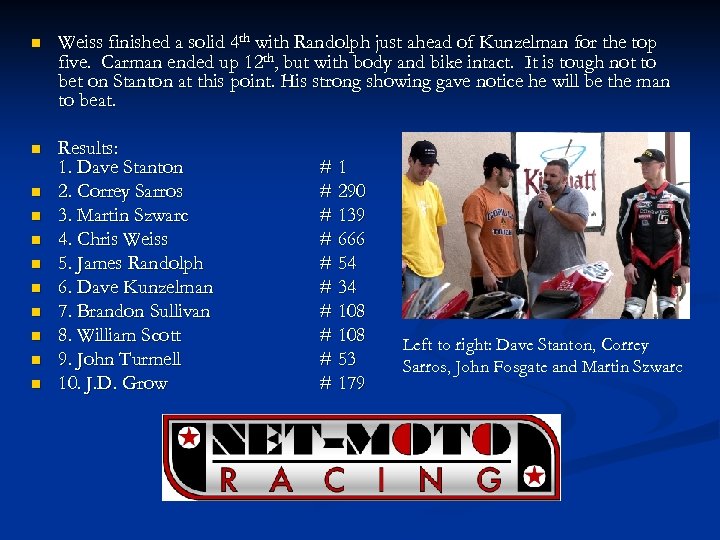 Clubman Class a new series n n The AFM introduced a new series for 2006 to allow new racers and racers that wanted to race in a little different environment. The race was rained out on Saturday afternoon and ended up being the first race of the day on Sunday. All three classes would run in a three wave start. Open class started first with a couple of wheelies, a bunch of cheering as the fans were extremely supportive. Many of the riders were first time racers and others were experiencing their first shot at winning the race.

n n Clubman heavyweight is the first to launch and with the Green Flag we see a few wheelies and the field take off to Turn One. Clubman middleweight is off next with one rider stalling on the line and all the others making off with a clean get away. In the lightweight class it was Paul Berger # 923 and Charlie Inman # 586 off the line first, with Inman snatching the lead. As he dove through turn one, a rider went down ahead in turn 3 A. Tad Koklich was the first to see the Riverside banking, leading the heavyweight. He continued to roll in the lead and cross the line to be the first to lead a lap. Richard Serne was close and then there was a pair just behind battling for 3 rd and 4 th.

In lightweight David Ben-Jamin led a pack of three guys dicing as they completed their 1 st lap. Heavyweight had Koklich and Serne still going at it as the three classes start to mix and we have some serious passing going on. At the ½ way flags we had our first really good battle between was in heavyweight as Koklich and Serne. In the middleweight class Ben-Jamin was first into turn one to lead lap 5 on the run to the white flag. Brian Esslinger was near William Fox are still on the podium with Tom Shao opening a couple of bike lengths on Ozzie Fregoso as they see their first white flag of the year.

Formula Opens Twins. n n The OT’s would start first in a two wave class that included the Open Production machines as well. Eric Gulbransen rolled his Ducati 749 R to the pole in another attempt to take a victory in the class he won last year. 23 entries lit it up at the green and the regular wrecking crew of the AFM gang was out of the gate and racing. The green had Bud Anderson with one wheel up as the veteran racer was just a bit anxious on the draw. Gulbransen rocketed to the front with Scott Schwanbeck and Patrick Blackburn moving by Anderson on the run to Turn One. AFM # 37 Bud Anderson Patrick Blackburn finished ……on the podium.

n n n n Go Go came by with a 5 bike length lead on Lap One and it was Blackburn, Anderson and Schwanback who were in the hunt for the podium and a shot at Gulbransen for the win. He continued to run strong out front and leading Blackburn and a now challenging Anderson. Schwanback continued to hold 4 th with Simon Williams in 5 th with Craig Mc. Lean hunting for the spot behind as the white flag was shown. Go Go Gulbransen did it again to the big twins gang and in a great battle behind it was Bud moving out of the draft and slicing by a wheel at most to claim second place… at least that’s what I thought. The timing did not agree. Results: 1. Eric Gulbransen 2. Patrick Blackburn 3. Bud Anderson 4. Craig Mc. Lean 5. Scott Schwanbeck # 394 # 119 # 37 # 501 # 196 Go Go Gulbransen dominated on the track and celebrated accordingly on the cool off lap

Open Production n n Open Production is stacked this year and this much talent has not run this deep in this class for a few years. Probably back to the late 80’s and early 90’s when Suzuki Cup was the “Thing”. Back in the day when only Suzuki put out “Real” contingency money, Production classes were always well attended and the battle for the top ten fierce with capable racers and life was good. The front row today would be class Champion Martin Szwarc with Corey Sarros, William Scott, Chris Weiss and Daniel Bokum on row one. Brandon Sullivan, Greg Davis, Mark Montalvo and Mike Ellsworth would fill out the row behind. Net-Moto Racing’s AFM #6 Andy Carman and Oakland Suzuki / ARClight Racing, AFM # 1 Dave Stanton would line up side by side on Row 4 as part of the AFM “Known Fast Guy” rule. David Kunzelman flying thru the Riverside Banking

n n Dave Stanton looking for a Open Production Class crown n n The “KFG” rule gives the experienced and successful racers the chance to grid near the front. Often a factor on whether an AMA full timer or other series top Pro’s will decide to give an AFM race a go here or there. A good call by Kevin Smith, AFM President and the board that seems very proactive in securing the AFM’s status well into the Century. To the battle at hand. The board went sideways and the green dropped.

n The waving flag sent Szwarc and Sarros off the line to head the charge to Turn 1 as Carman and Stanton sliced thru one row and looked to get to the front. The first round in a new series, in a new class means you need to get a good finish to set you up for “good” grid spots for the rest year. Stanton got the best of it and moved to the inside as Carman was forced to split right and he was stymied after a couple more spots. Stanton shuffled up well inside the top ten and carried the momentum forward to be an impressive 3 rd by the Bus Stop. n Szwarc had the point and Sarros was his shadow as they led the field around the Riverside Banking and into Lost Hills. Martin Szwarc ran off the track and came back big with a 3 rd

n n n Sarros found Stanton on his heels and Stanton moved by to claim the second spot on the run to the line for lap one. Stanton did not stop there diving inside into Turn 1 and with the move he announced “The Champ is in the House” in impressive style. Sarros ran third with Randolph up to challenge and Weiss battling with Dave Kunzelman. Carman was around 9 th and moving forward. Sarros held off Stanton briefly before # 1 moved by

n n The next lap had Stanton moving out on Szwarc and Randolph moved by Sarros to claim the 3 rd spot with Weiss not far behind looking solid. Szwarc then ran into trouble over shooting the entry into Turn 1 and headed into the dirt. He rode it out in a good save and was lucky that the rain soaked track from Saturday had not left the big one (mud hole) in his path. He rejoined intact although any chance of hanging with Stanton and a win was gone, but he kept that “have to finish Round One to be in the hunt” reality alive. Carman had passed Brandon Sullivan and he was now closing in on Kunzelman and the top five. Carman moves by Greg Davis

n Behind Carman and Sullivan we had Michael Jarrad, J. D. Grow, Mike Thompson and Bob Klatt. As they ½ way flags were flown #1 was out in front and pulling away staking his claim on a new class. Carman came into Turn 11 before the front straight and had some traffic as he looked for the draft off Kunzelman. n Clearing the traffic he found himself outside and out of pavement and headed for the “big one” that Szwarc did not find. He realized the only chance with the T-11 Bog was to ride it dirt bike style and hope for the best. Carman gassed it to the delight of the crowd watching and found his front wheel sideways three times, saving it to the cheers of all watching. He found himself with a lot of mud on the bike and himself and rejoined the race outside the top ten and spent a lap at ¾ warp speed as the mud cleared from tires and the mind.

n Szwarc was on the move and moving up. Stanton moved out front with Sarros and Weiss running 2 nd and 3 rd. Kunzelman was next with Randolph, Sullivan, and Turmell just ahead of J. D. Grow, with Szwarc quickly closing in behind. n The White Flag had a big gap from the leader to second and Szwarc was charging thru the field and was up to Randolph with Kunzelman in his tracks as they got the flag. He made his way by and found Carman’s off road adventure left Weiss ahead and continued to be consumed with him muddy and out of the top 10 making up for his mistake. When Stanton took the win it was a few clicks before Sarros came by for second a few click later it was Szwarc snagging the 3 rd spot with an aggressive charge back from what could have been disaster. He and Carman gave themselves a chance to stay in the championship fight by being smart and staying upright.