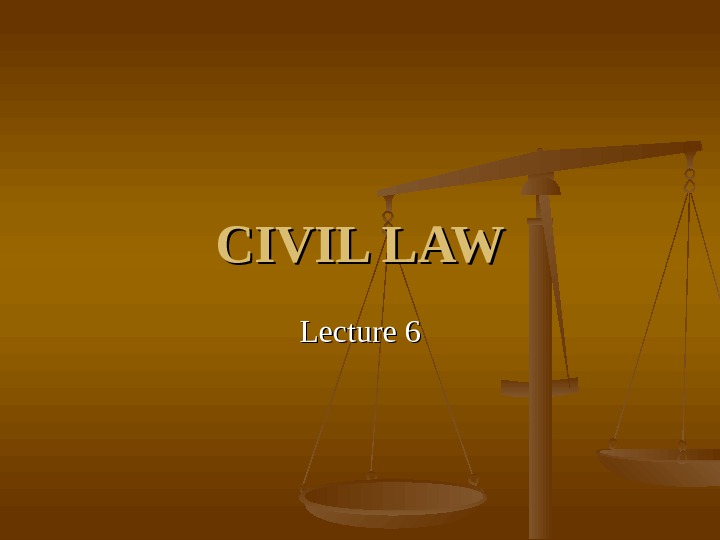 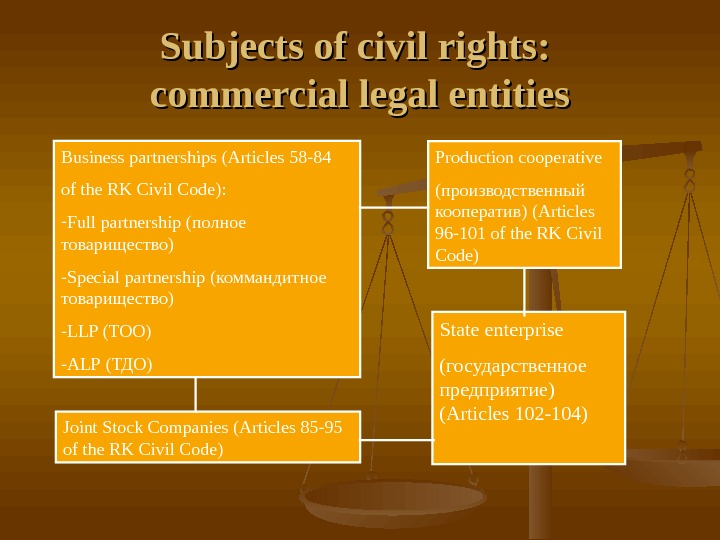 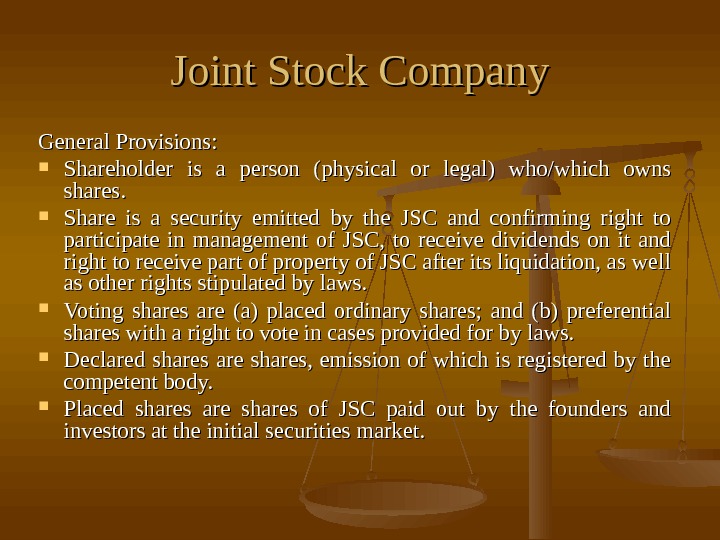 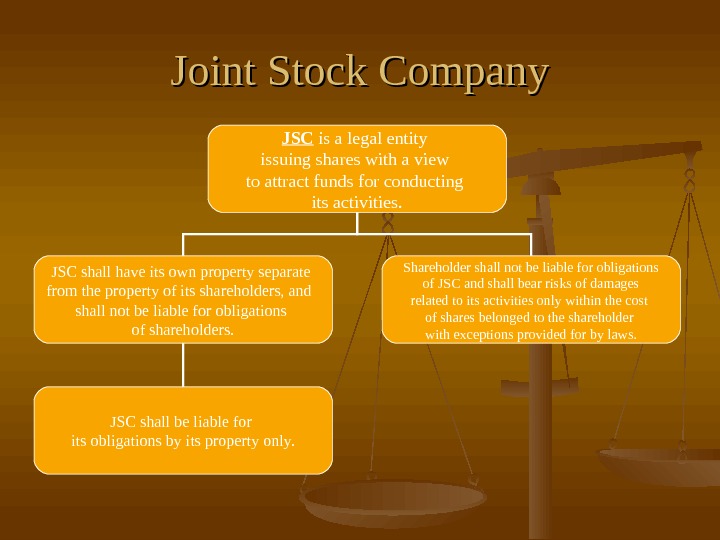 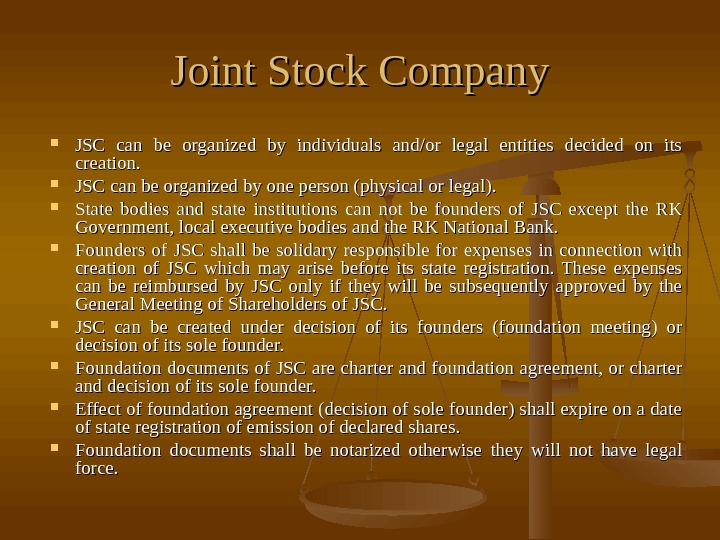 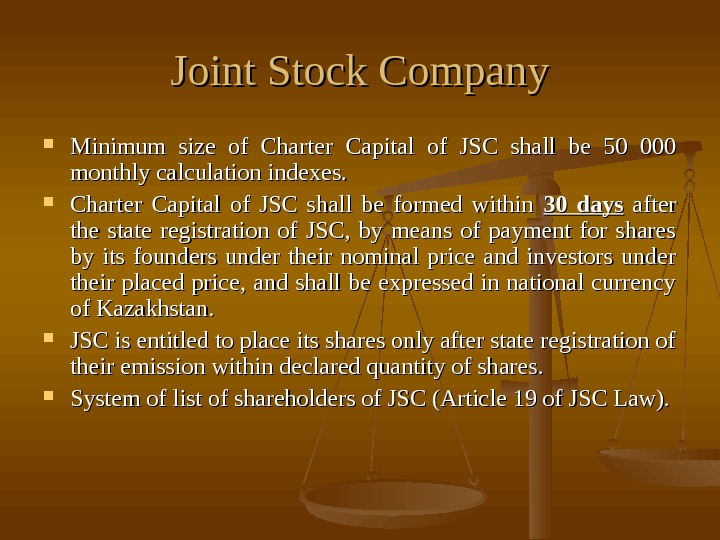 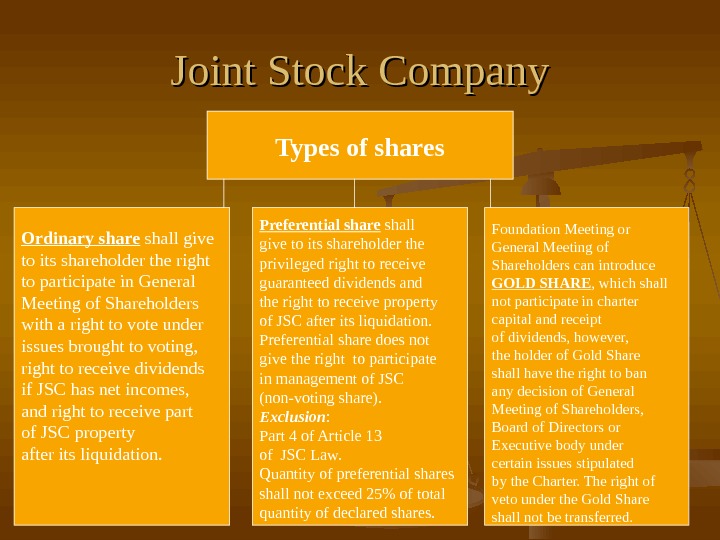 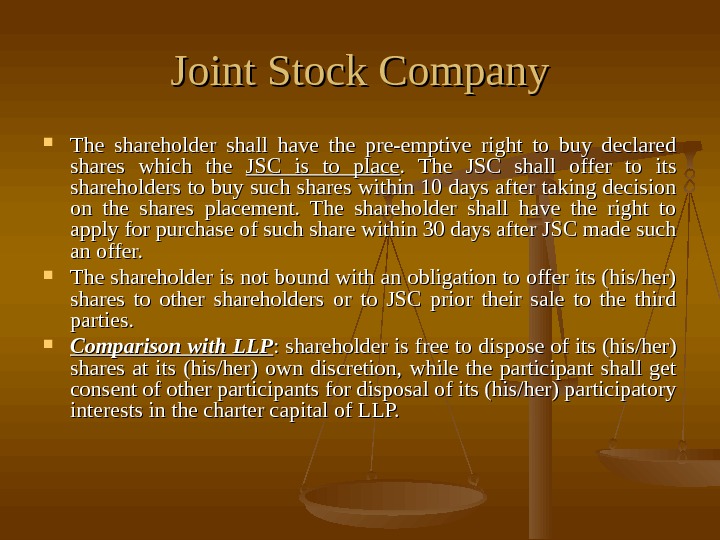 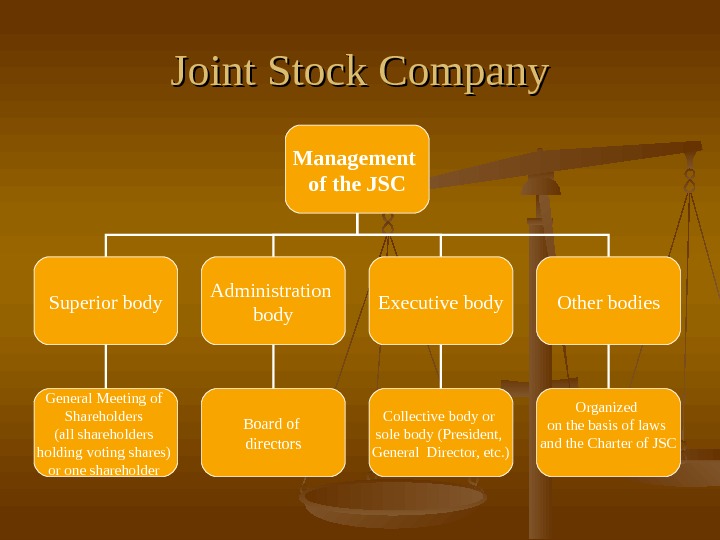 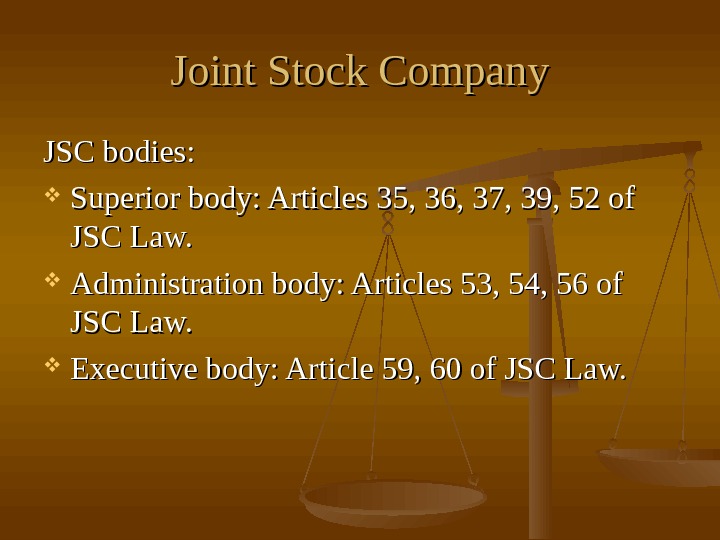 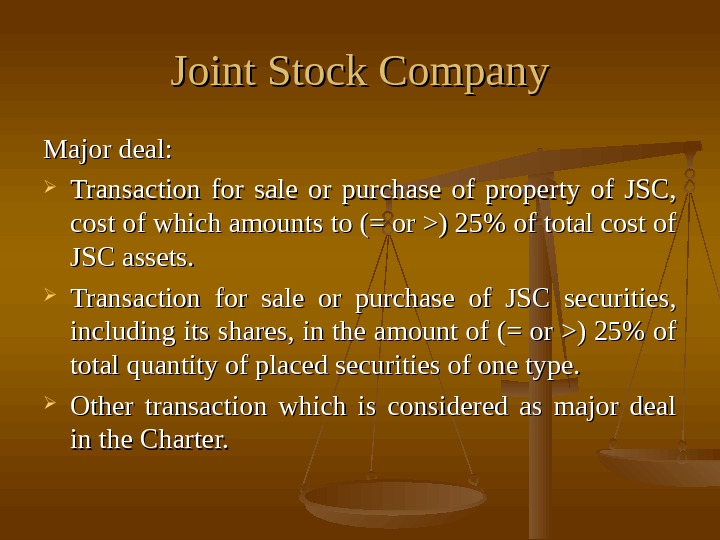 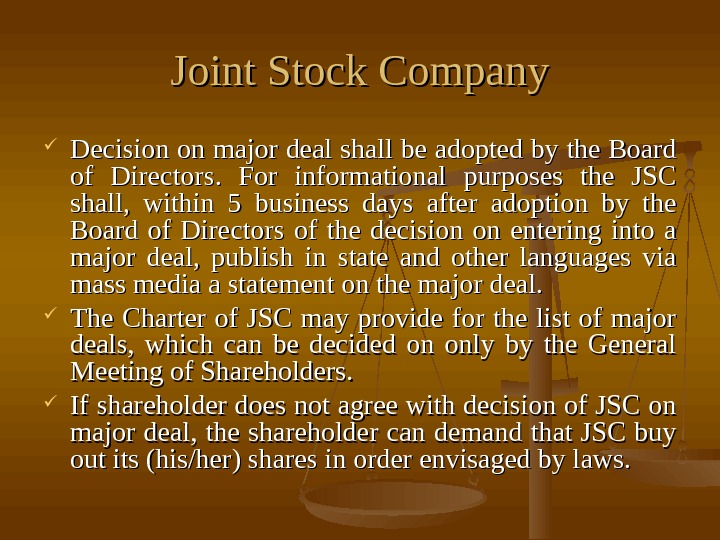 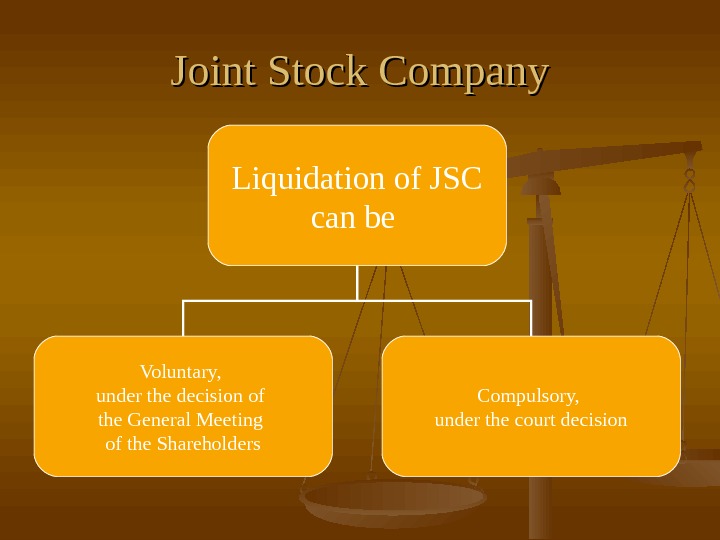 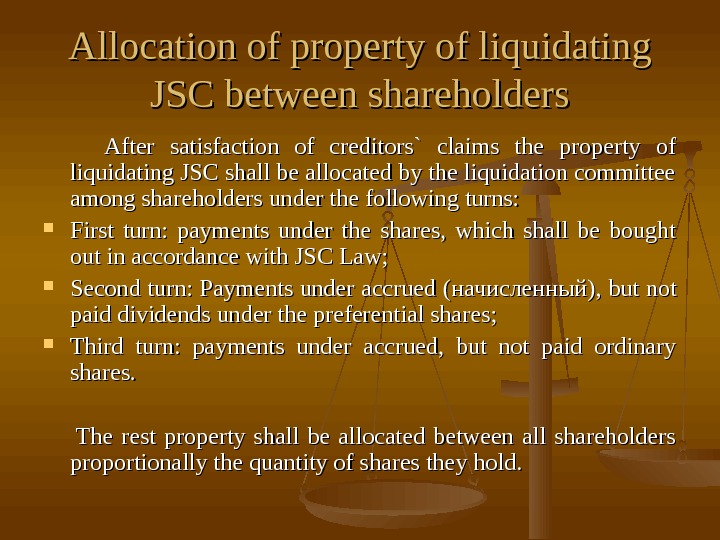 Joint Stock Company General Provisions: Shareholder is a person (physical or legal) who/which owns shares. Share is a security emitted by the JSC and confirming right to participate in management of JSC, to receive dividends on it and right to receive part of property of JSC after its liquidation, as well as other rights stipulated by laws. Voting shares are (a) placed ordinary shares; and (b) preferential shares with a right to vote in cases provided for by laws. Declared shares are shares, emission of which is registered by the competent body. Placed shares are shares of JSC paid out by the founders and investors at the initial securities market.

Joint Stock Company JSC can be organized by individuals and/or legal entities decided on its creation. JSC can be organized by one person (physical or legal). State bodies and state institutions can not be founders of JSC except the RK Government, local executive bodies and the RK National Bank. Founders of JSC shall be solidary responsible for expenses in connection with creation of JSC which may arise before its state registration. These expenses can be reimbursed by JSC only if they will be subsequently approved by the General Meeting of Shareholders of JSC can be created under decision of its founders (foundation meeting) or decision of its sole founder. Foundation documents of JSC are charter and foundation agreement, or charter and decision of its sole founder. Effect of foundation agreement (decision of sole founder) shall expire on a date of state registration of emission of declared shares. Foundation documents shall be notarized otherwise they will not have legal force.

Joint Stock Company Minimum size of Charter Capital of JSC shall be 50 000 monthly calculation indexes. Charter Capital of JSC shall be formed within 30 days after the state registration of JSC, by means of payment for shares by its founders under their nominal price and investors under their placed price, and shall be expressed in national currency of Kazakhstan. JSC is entitled to place its shares only after state registration of their emission within declared quantity of shares. System of list of shareholders of JSC (Article 19 of JSC Law).

Joint Stock Company Management of the JSC Superior body Administration body Executive body General Meeting of Shareholders (all shareholders holding voting shares) or one shareholder Board of directors Collective body or sole body (President, General Director, etc. ) Other bodies Organized on the basis of laws and the Charter of JS

Joint Stock Company Major deal: Transaction for sale or purchase of property of JSC, cost of which amounts to (= or >) 25% of total cost of JSC assets. Transaction for sale or purchase of JSC securities, including its shares, in the amount of (= or >) 25% of total quantity of placed securities of one type. Other transaction which is considered as major deal in the Charter.

Joint Stock Company Decision on major deal shall be adopted by the Board of Directors. For informational purposes the JSC shall, within 5 business days after adoption by the Board of Directors of the decision on entering into a major deal, publish in state and other languages via mass media a statement on the major deal. The Charter of JSC may provide for the list of major deals, which can be decided on only by the General Meeting of Shareholders. If shareholder does not agree with decision of JSC on major deal, the shareholder can demand that JSC buy out its (his/her) shares in order envisaged by laws.

Joint Stock Company Liquidation of JSC can be Voluntary, under the decision of the General Meeting of the Shareholders Compulsory, under the court decision