Christmas in russia and the u K 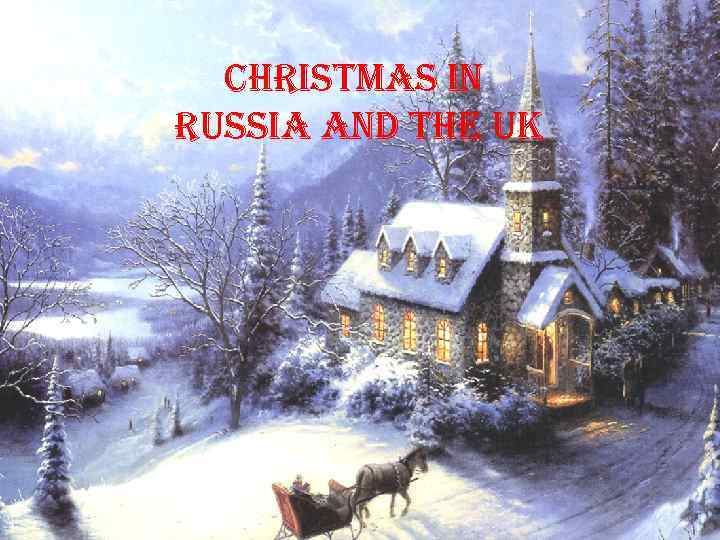 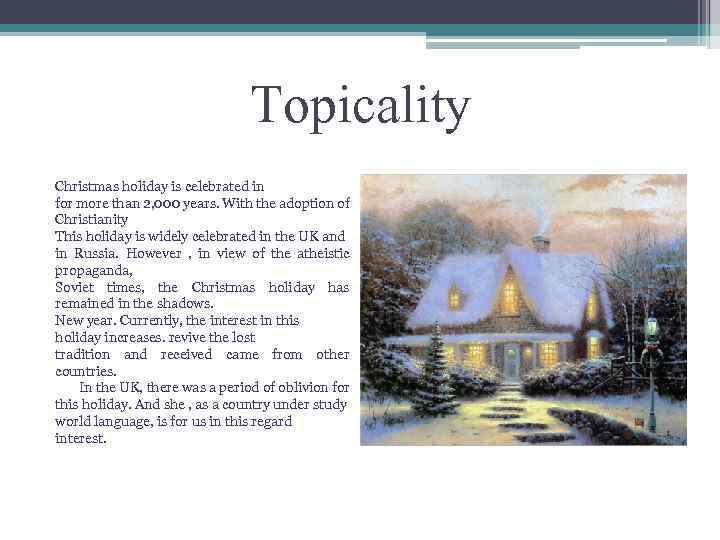 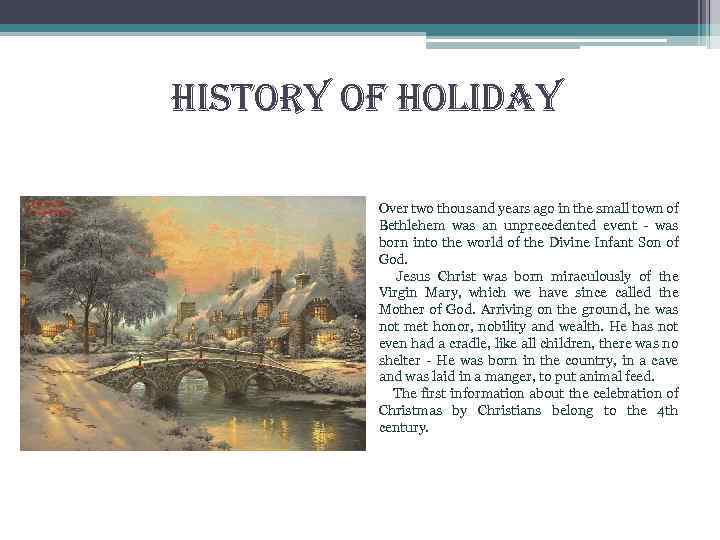 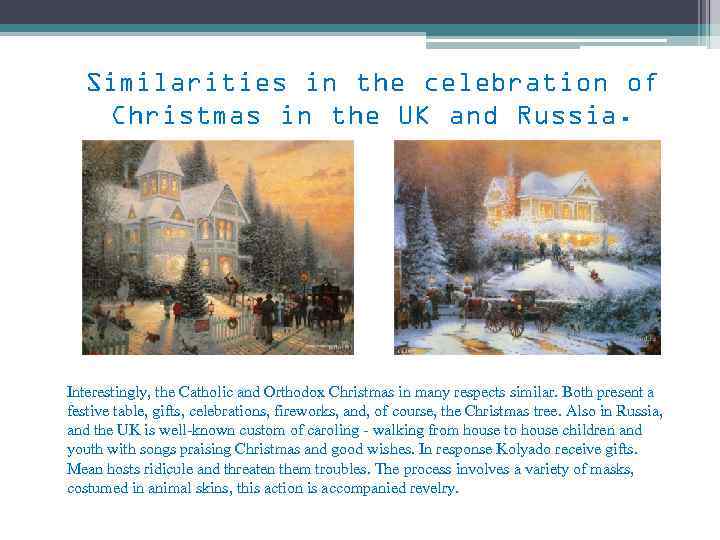 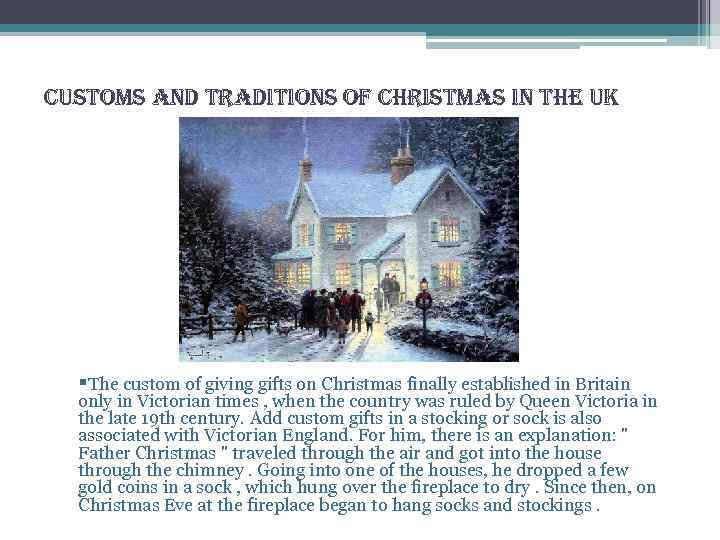 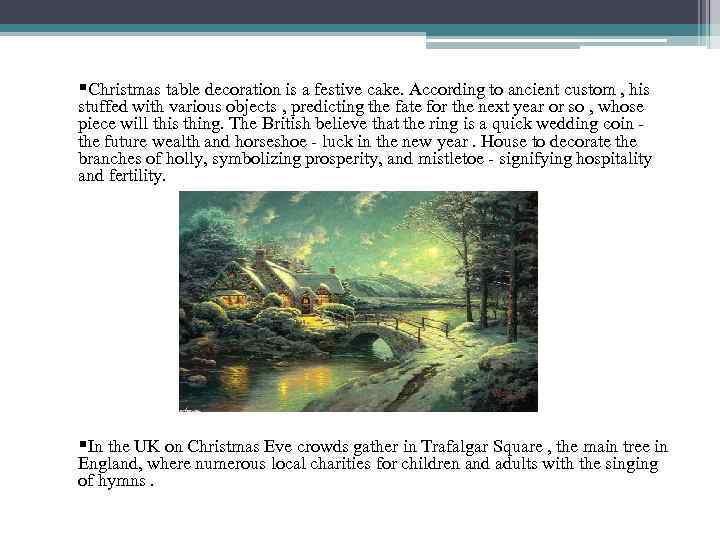 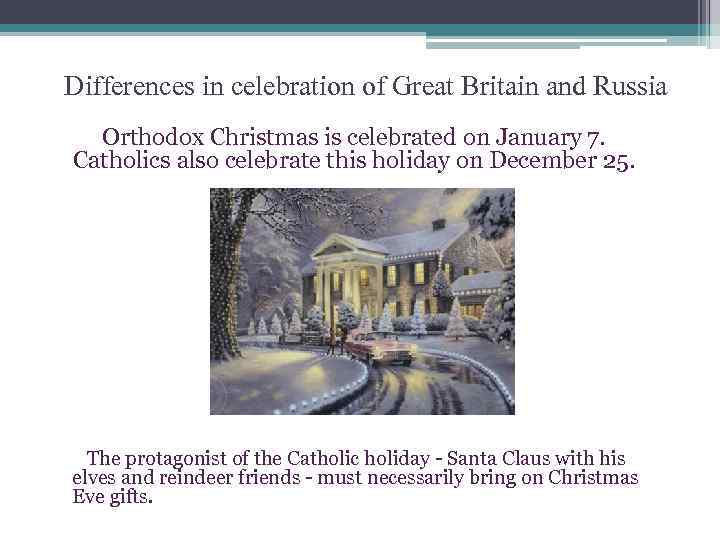 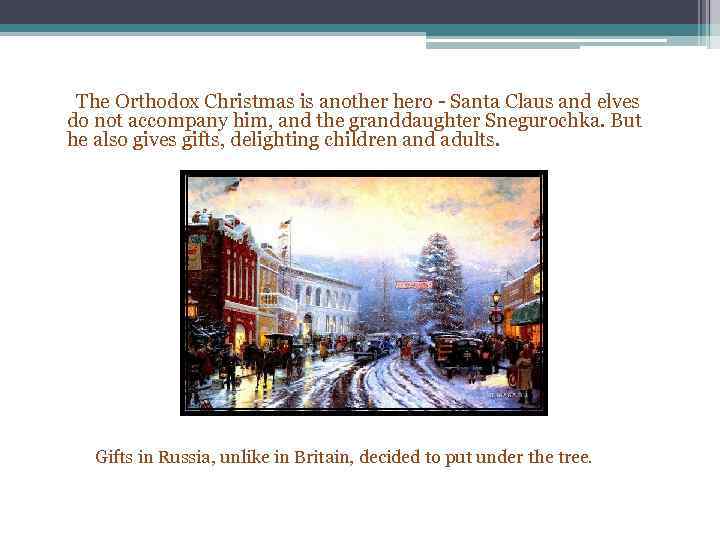 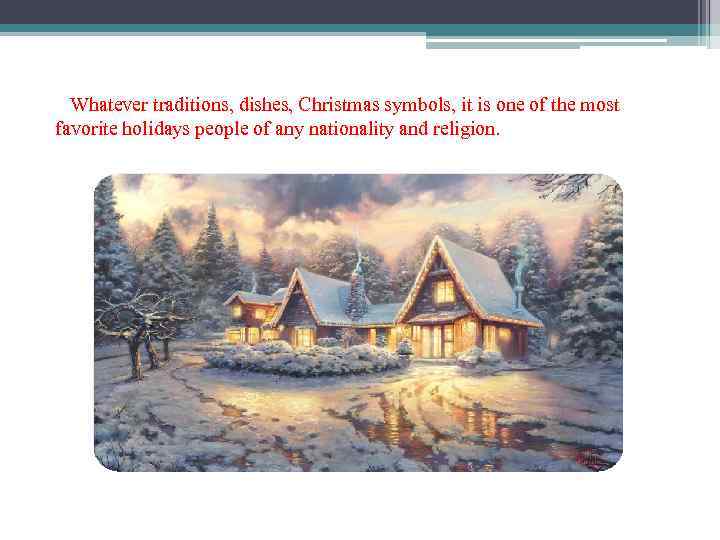 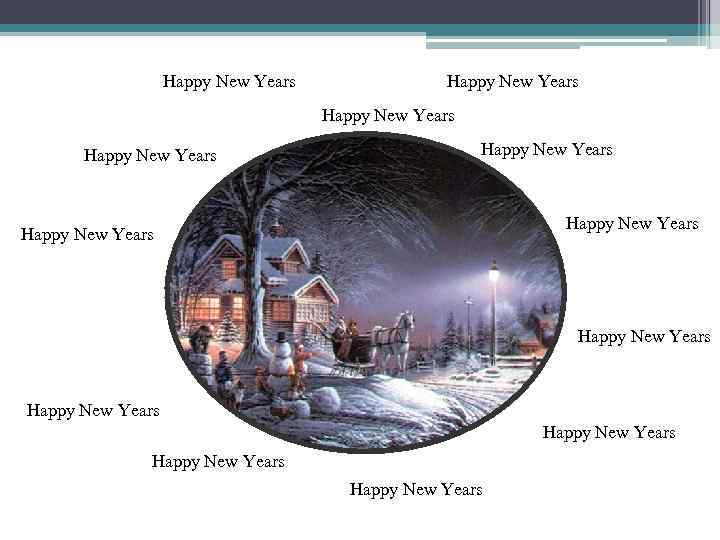 Скачать презентацию Christmas in russia and the u K

Christmas in russia and the u. K

Topicality Christmas holiday is celebrated in for more than 2, 000 years. With the adoption of Christianity This holiday is widely celebrated in the UK and in Russia. However , in view of the atheistic propaganda, Soviet times, the Christmas holiday has remained in the shadows. New year. Currently, the interest in this holiday increases. revive the lost tradition and received came from other countries. In the UK, there was a period of oblivion for this holiday. And she , as a country under study world language, is for us in this regard interest.

history of holiday Over two thousand years ago in the small town of Bethlehem was an unprecedented event - was born into the world of the Divine Infant Son of God. Jesus Christ was born miraculously of the Virgin Mary, which we have since called the Mother of God. Arriving on the ground, he was not met honor, nobility and wealth. He has not even had a cradle, like all children, there was no shelter - He was born in the country, in a cave and was laid in a manger, to put animal feed. The first information about the celebration of Christmas by Christians belong to the 4 th century.

Similarities in the celebration of Christmas in the UK and Russia. Interestingly, the Catholic and Orthodox Christmas in many respects similar. Both present a festive table, gifts, celebrations, fireworks, and, of course, the Christmas tree. Also in Russia, and the UK is well-known custom of caroling - walking from house to house children and youth with songs praising Christmas and good wishes. In response Kolyado receive gifts. Mean hosts ridicule and threaten them troubles. The process involves a variety of masks, costumed in animal skins, this action is accompanied revelry.

Customs and traditions of Christmas in the u. K §The custom of giving gifts on Christmas finally established in Britain only in Victorian times , when the country was ruled by Queen Victoria in the late 19 th century. Add custom gifts in a stocking or sock is also associated with Victorian England. For him, there is an explanation: " Father Christmas " traveled through the air and got into the house through the chimney. Going into one of the houses, he dropped a few gold coins in a sock , which hung over the fireplace to dry. Since then, on Christmas Eve at the fireplace began to hang socks and stockings.

§Christmas table decoration is a festive cake. According to ancient custom , his stuffed with various objects , predicting the fate for the next year or so , whose piece will this thing. The British believe that the ring is a quick wedding coin the future wealth and horseshoe - luck in the new year. House to decorate the branches of holly, symbolizing prosperity, and mistletoe - signifying hospitality and fertility. §In the UK on Christmas Eve crowds gather in Trafalgar Square , the main tree in England, where numerous local charities for children and adults with the singing of hymns.

Differences in celebration of Great Britain and Russia Orthodox Christmas is celebrated on January 7. Catholics also celebrate this holiday on December 25. The protagonist of the Catholic holiday - Santa Claus with his elves and reindeer friends - must necessarily bring on Christmas Eve gifts.

The Orthodox Christmas is another hero - Santa Claus and elves do not accompany him, and the granddaughter Snegurochka. But he also gives gifts, delighting children and adults. Gifts in Russia, unlike in Britain, decided to put under the tree.

Whatever traditions, dishes, Christmas symbols, it is one of the most favorite holidays people of any nationality and religion.

The 25 th of December is Christmas