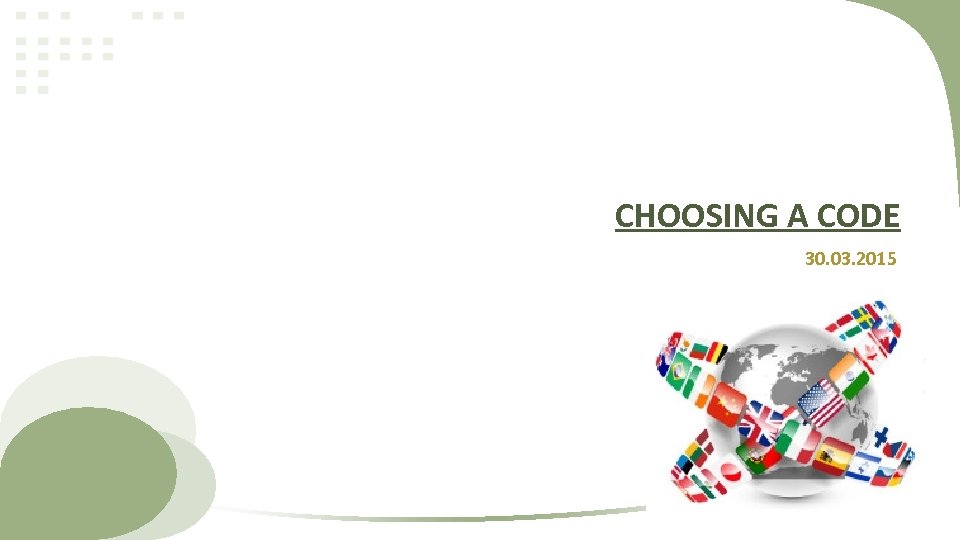 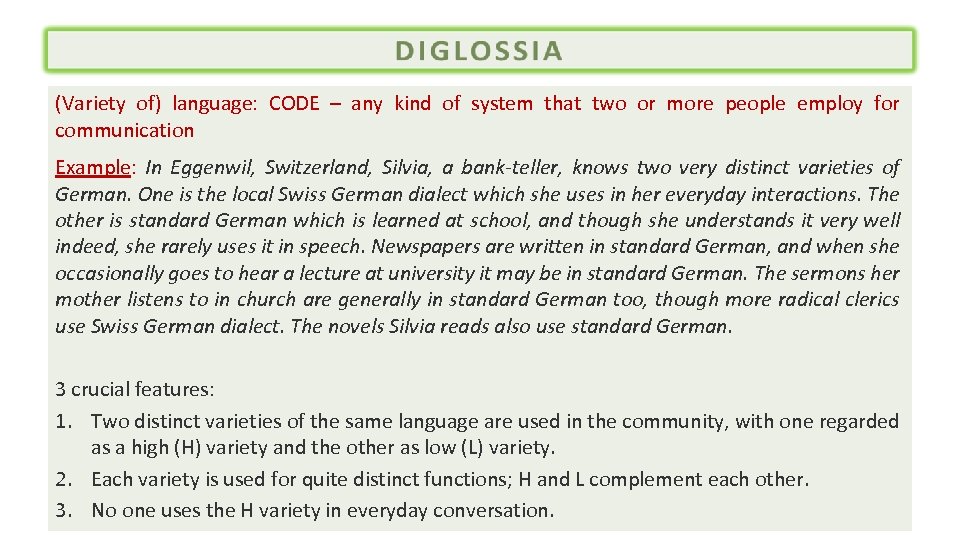 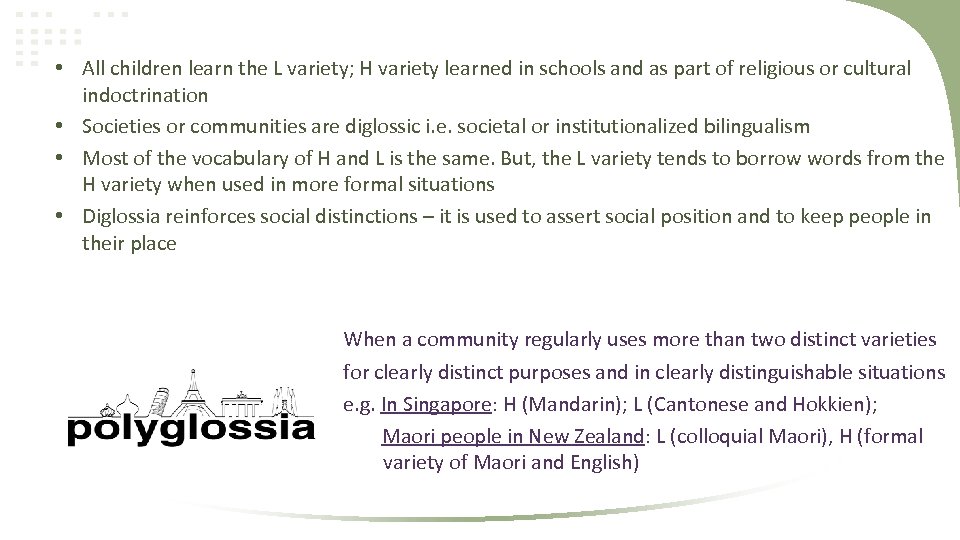 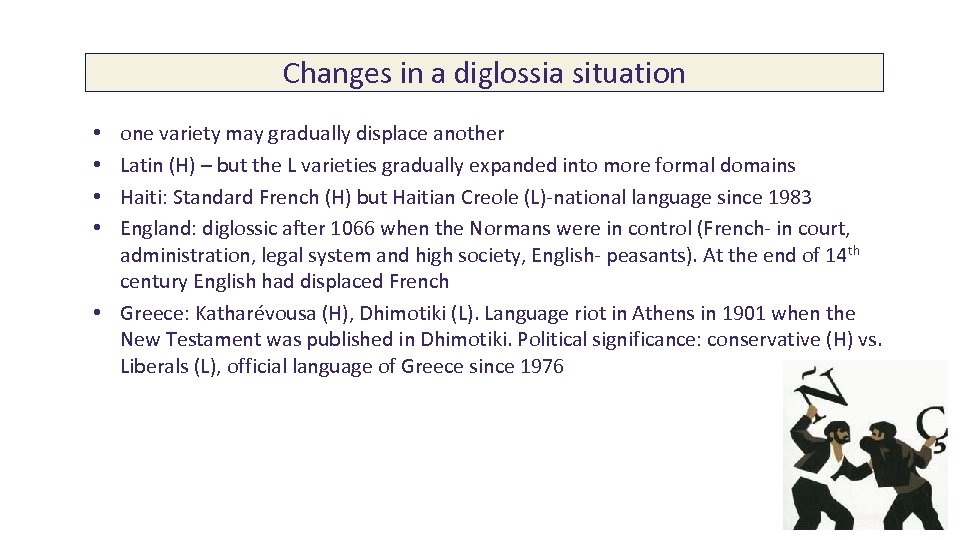 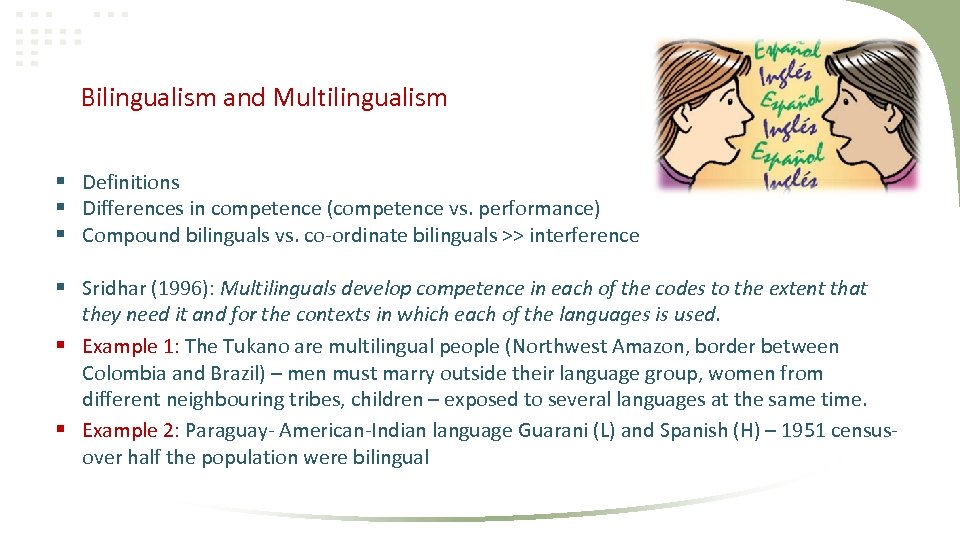 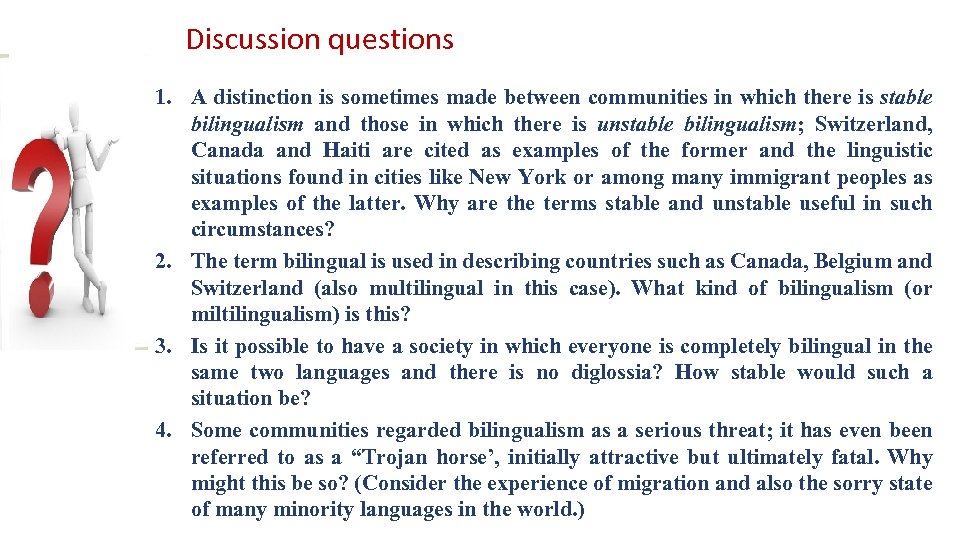 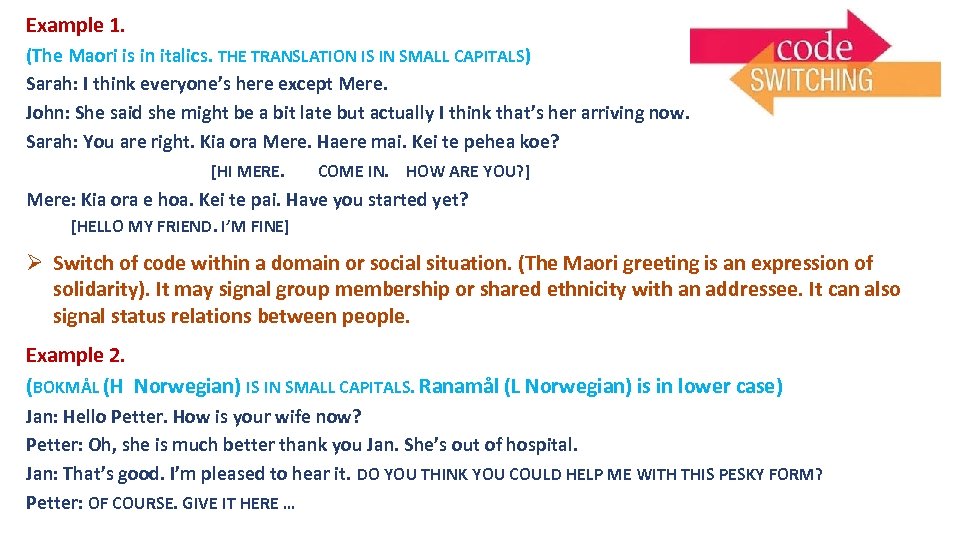 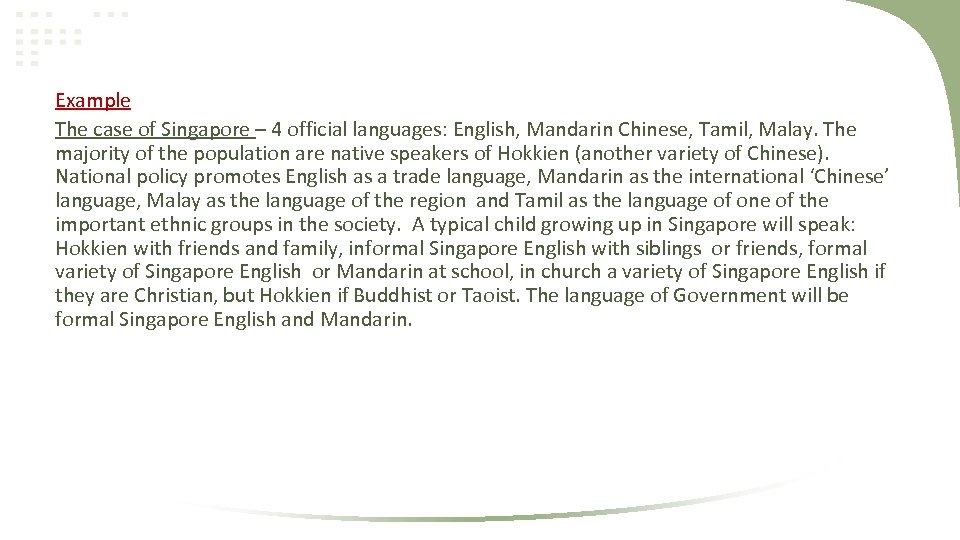 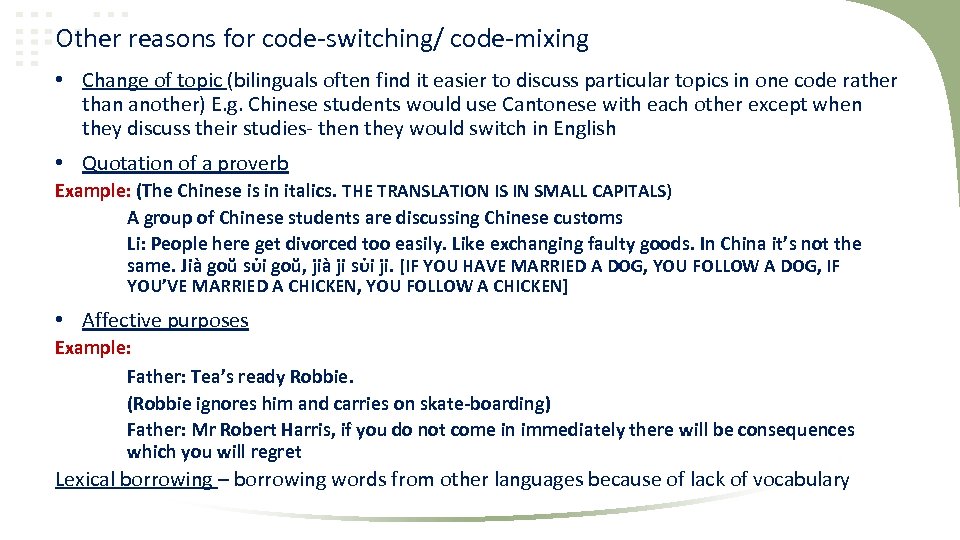 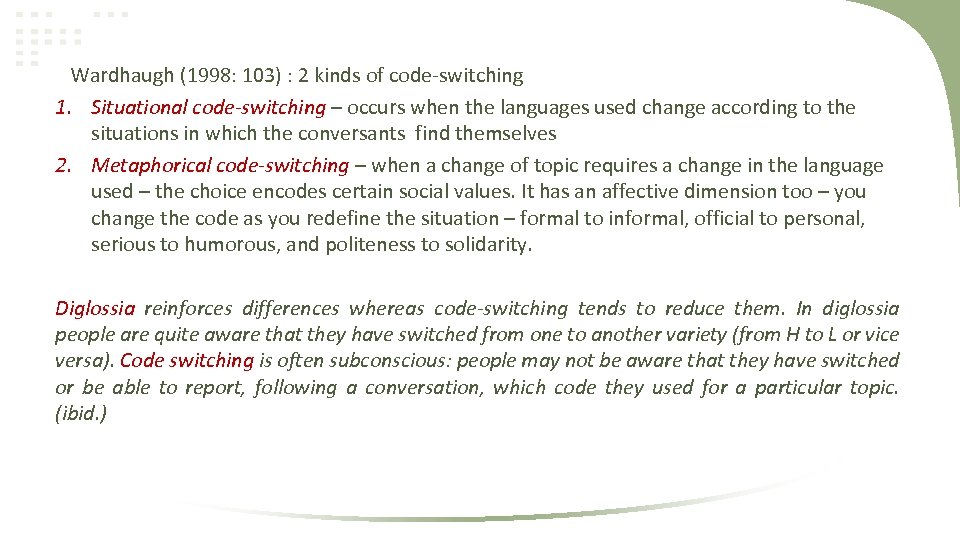 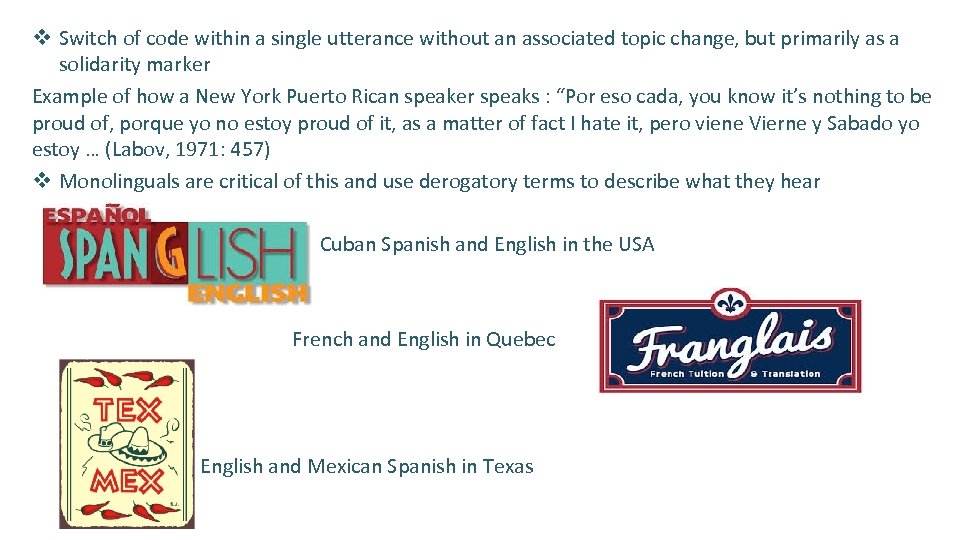 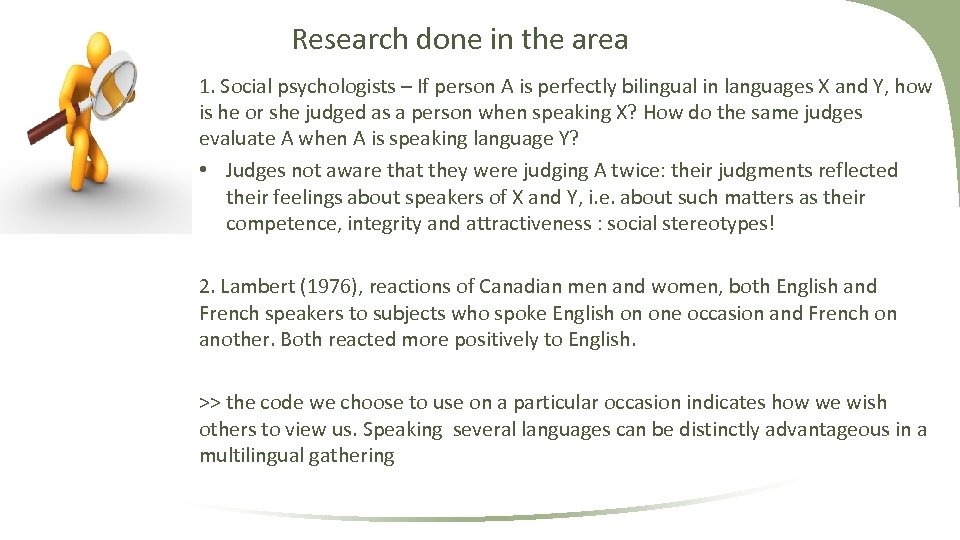 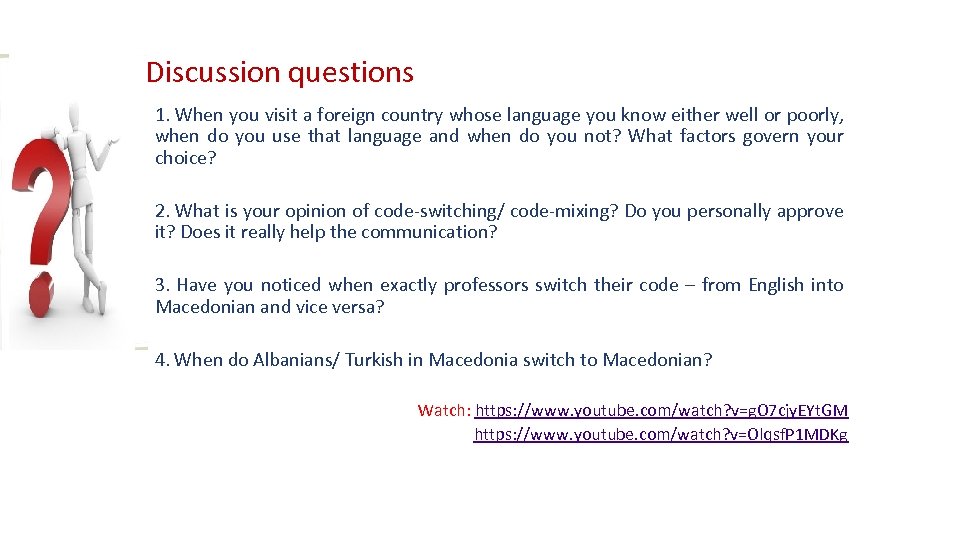 (Variety of) language: CODE – any kind of system that two or more people employ for communication Example: In Eggenwil, Switzerland, Silvia, a bank-teller, knows two very distinct varieties of German. One is the local Swiss German dialect which she uses in her everyday interactions. The other is standard German which is learned at school, and though she understands it very well indeed, she rarely uses it in speech. Newspapers are written in standard German, and when she occasionally goes to hear a lecture at university it may be in standard German. The sermons her mother listens to in church are generally in standard German too, though more radical clerics use Swiss German dialect. The novels Silvia reads also use standard German. 3 crucial features: 1. Two distinct varieties of the same language are used in the community, with one regarded as a high (H) variety and the other as low (L) variety. 2. Each variety is used for quite distinct functions; H and L complement each other. 3. No one uses the H variety in everyday conversation.

• All children learn the L variety; H variety learned in schools and as part of religious or cultural indoctrination • Societies or communities are diglossic i. e. societal or institutionalized bilingualism • Most of the vocabulary of H and L is the same. But, the L variety tends to borrow words from the H variety when used in more formal situations • Diglossia reinforces social distinctions – it is used to assert social position and to keep people in their place When a community regularly uses more than two distinct varieties » for clearly distinct purposes and in clearly distinguishable situations e. g. In Singapore: H (Mandarin); L (Cantonese and Hokkien); Maori people in New Zealand: L (colloquial Maori), H (formal variety of Maori and English)

Changes in a diglossia situation one variety may gradually displace another Latin (H) – but the L varieties gradually expanded into more formal domains Haiti: Standard French (H) but Haitian Creole (L)-national language since 1983 England: diglossic after 1066 when the Normans were in control (French- in court, administration, legal system and high society, English- peasants). At the end of 14 th century English had displaced French • Greece: Katharévousa (H), Dhimotiki (L). Language riot in Athens in 1901 when the New Testament was published in Dhimotiki. Political significance: conservative (H) vs. Liberals (L), official language of Greece since 1976 • •

Bilingualism and Multilingualism § Definitions § Differences in competence (competence vs. performance) § Compound bilinguals vs. co-ordinate bilinguals >> interference § Sridhar (1996): Multilinguals develop competence in each of the codes to the extent that they need it and for the contexts in which each of the languages is used. § Example 1: The Tukano are multilingual people (Northwest Amazon, border between Colombia and Brazil) – men must marry outside their language group, women from different neighbouring tribes, children – exposed to several languages at the same time. § Example 2: Paraguay- American-Indian language Guarani (L) and Spanish (H) – 1951 censusover half the population were bilingual

Discussion questions 1. A distinction is sometimes made between communities in which there is stable bilingualism and those in which there is unstable bilingualism; Switzerland, Canada and Haiti are cited as examples of the former and the linguistic situations found in cities like New York or among many immigrant peoples as examples of the latter. Why are the terms stable and unstable useful in such circumstances? 2. The term bilingual is used in describing countries such as Canada, Belgium and Switzerland (also multilingual in this case). What kind of bilingualism (or miltilingualism) is this? 3. Is it possible to have a society in which everyone is completely bilingual in the same two languages and there is no diglossia? How stable would such a situation be? 4. Some communities regarded bilingualism as a serious threat; it has even been referred to as a “Trojan horse’, initially attractive but ultimately fatal. Why might this be so? (Consider the experience of migration and also the sorry state of many minority languages in the world. )

Example 1. (The Maori is in italics. THE TRANSLATION IS IN SMALL CAPITALS) Sarah: I think everyone’s here except Mere. John: She said she might be a bit late but actually I think that’s her arriving now. Sarah: You are right. Kia ora Mere. Haere mai. Kei te pehea koe? [HI MERE. COME IN. HOW ARE YOU? ] Mere: Kia ora e hoa. Kei te pai. Have you started yet? [HELLO MY FRIEND. I’M FINE] Ø Switch of code within a domain or social situation. (The Maori greeting is an expression of solidarity). It may signal group membership or shared ethnicity with an addressee. It can also signal status relations between people. Example 2. (BOKMÅL (H Norwegian) IS IN SMALL CAPITALS. Ranamål (L Norwegian) is in lower case) Jan: Hello Petter. How is your wife now? Petter: Oh, she is much better thank you Jan. She’s out of hospital. Jan: That’s good. I’m pleased to hear it. DO YOU THINK YOU COULD HELP ME WITH THIS PESKY FORM? Petter: OF COURSE. GIVE IT HERE …

Other reasons for code-switching/ code-mixing • Change of topic (bilinguals often find it easier to discuss particular topics in one code rather than another) E. g. Chinese students would use Cantonese with each other except when they discuss their studies- then they would switch in English • Quotation of a proverb Example: (The Chinese is in italics. THE TRANSLATION IS IN SMALL CAPITALS) A group of Chinese students are discussing Chinese customs Li: People here get divorced too easily. Like exchanging faulty goods. In China it’s not the same. Jià goŭ sὐi goŭ, jià ji sὐi ji. [IF YOU HAVE MARRIED A DOG, YOU FOLLOW A DOG, IF YOU’VE MARRIED A CHICKEN, YOU FOLLOW A CHICKEN] • Affective purposes Example: Father: Tea’s ready Robbie. (Robbie ignores him and carries on skate-boarding) Father: Mr Robert Harris, if you do not come in immediately there will be consequences which you will regret Lexical borrowing – borrowing words from other languages because of lack of vocabulary

Wardhaugh (1998: 103) : 2 kinds of code-switching 1. Situational code-switching – occurs when the languages used change according to the situations in which the conversants find themselves 2. Metaphorical code-switching – when a change of topic requires a change in the language used – the choice encodes certain social values. It has an affective dimension too – you change the code as you redefine the situation – formal to informal, official to personal, serious to humorous, and politeness to solidarity. Diglossia reinforces differences whereas code-switching tends to reduce them. In diglossia people are quite aware that they have switched from one to another variety (from H to L or vice versa). Code switching is often subconscious: people may not be aware that they have switched or be able to report, following a conversation, which code they used for a particular topic. (ibid. )

v Switch of code within a single utterance without an associated topic change, but primarily as a solidarity marker Example of how a New York Puerto Rican speaker speaks : “Por eso cada, you know it’s nothing to be proud of, porque yo no estoy proud of it, as a matter of fact I hate it, pero viene Vierne y Sabado yo estoy … (Labov, 1971: 457) v Monolinguals are critical of this and use derogatory terms to describe what they hear Cuban Spanish and English in the USA French and English in Quebec English and Mexican Spanish in Texas

Research done in the area 1. Social psychologists – If person A is perfectly bilingual in languages X and Y, how is he or she judged as a person when speaking X? How do the same judges evaluate A when A is speaking language Y? • Judges not aware that they were judging A twice: their judgments reflected their feelings about speakers of X and Y, i. e. about such matters as their competence, integrity and attractiveness : social stereotypes! 2. Lambert (1976), reactions of Canadian men and women, both English and French speakers to subjects who spoke English on one occasion and French on another. Both reacted more positively to English. >> the code we choose to use on a particular occasion indicates how we wish others to view us. Speaking several languages can be distinctly advantageous in a multilingual gathering

Discussion questions 1. When you visit a foreign country whose language you know either well or poorly, when do you use that language and when do you not? What factors govern your choice? 2. What is your opinion of code-switching/ code-mixing? Do you personally approve it? Does it really help the communication? 3. Have you noticed when exactly professors switch their code – from English into Macedonian and vice versa? 4. When do Albanians/ Turkish in Macedonia switch to Macedonian? Watch: https: //www. youtube. com/watch? v=g. O 7 cjy. EYt. GM https: //www. youtube. com/watch? v=Olqsf. P 1 MDKg