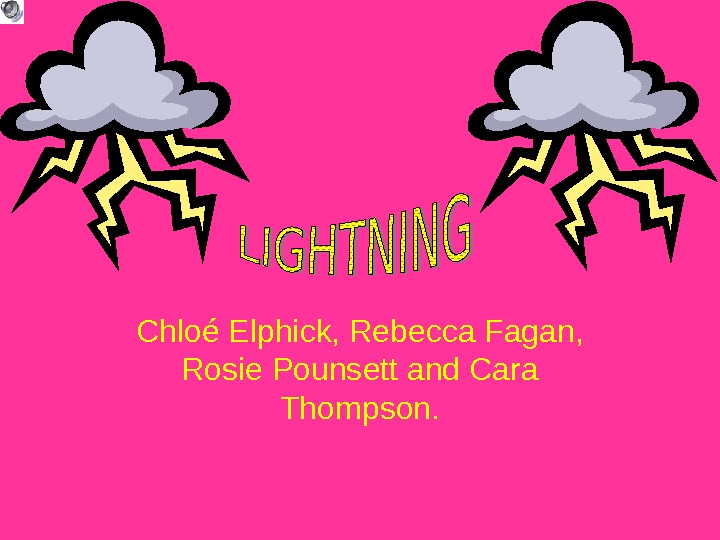 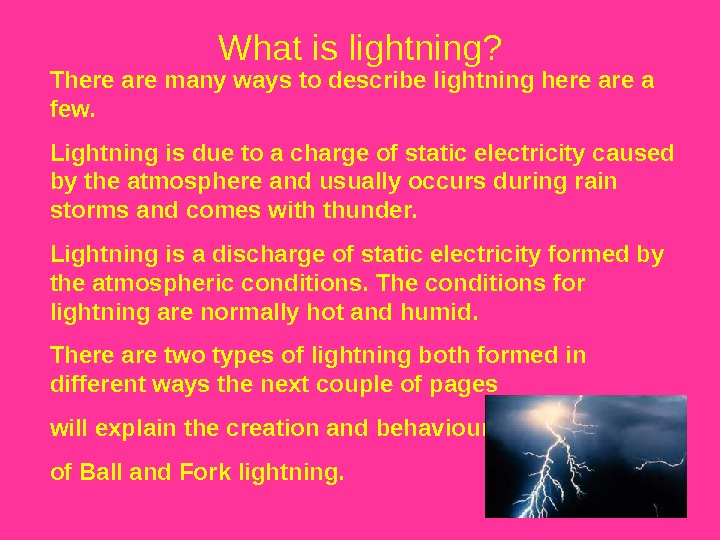 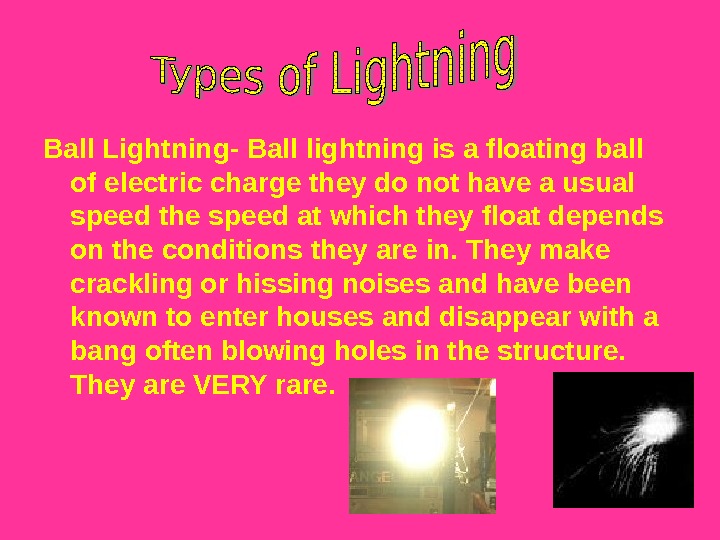 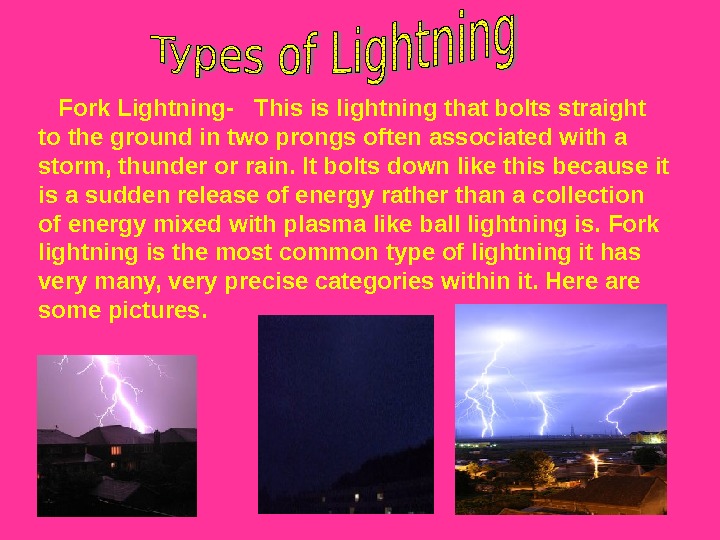 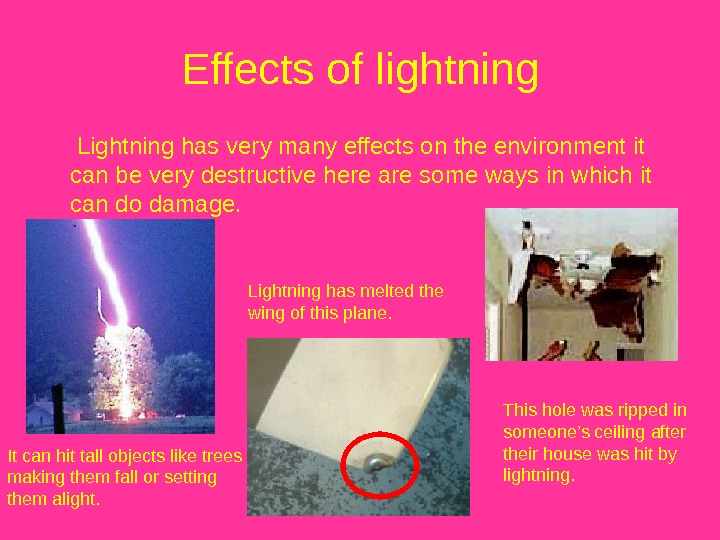 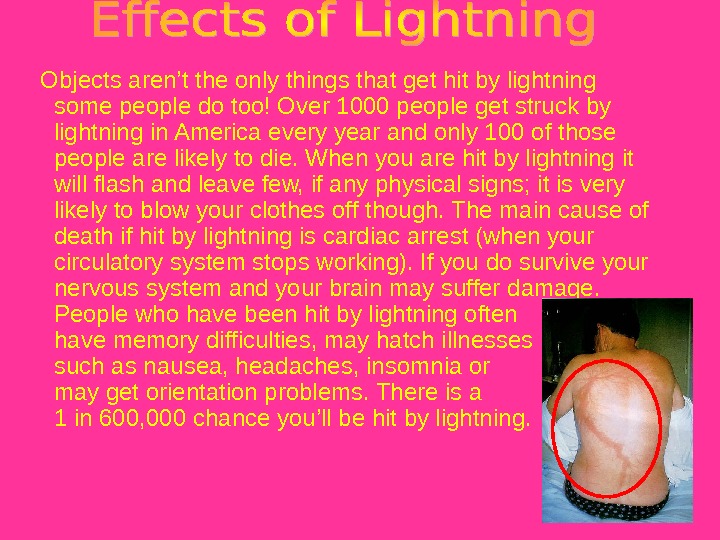 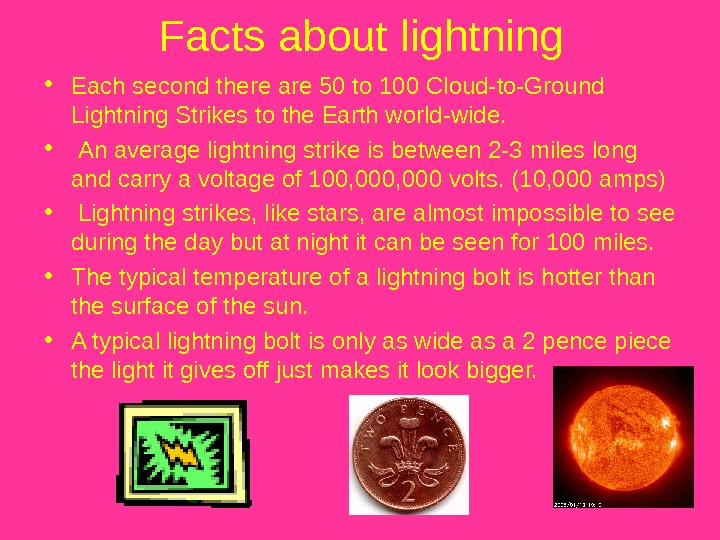 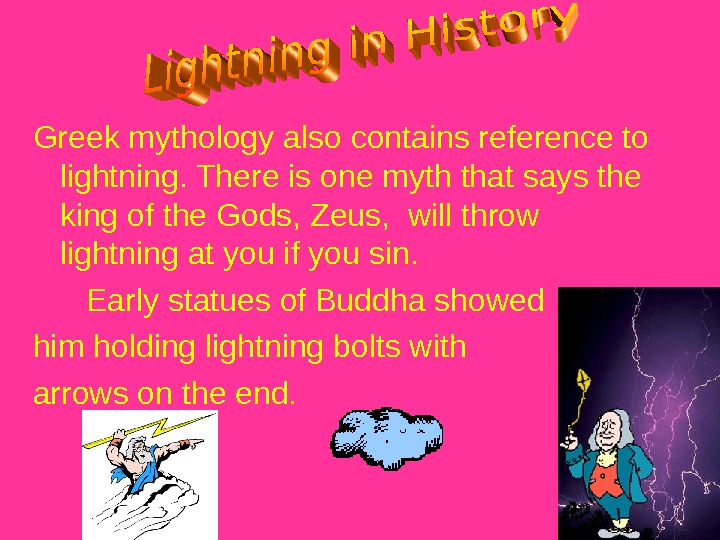 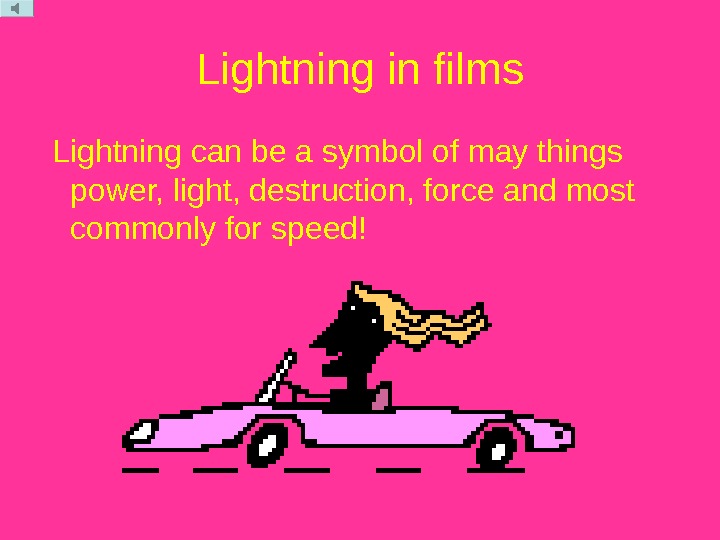 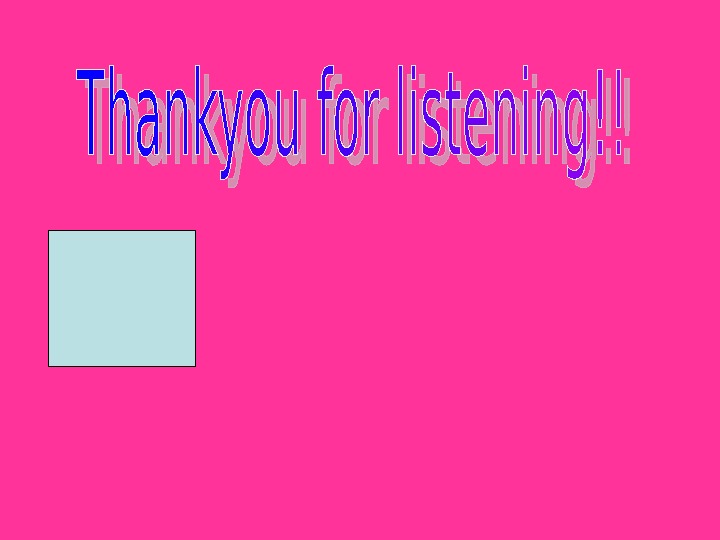 What is lightning? There are many ways to describe lightning here a few. Lightning is due to a charge of static electricity caused by the atmosphere and usually occurs during rain storms and comes with thunder. Lightning is a discharge of static electricity formed by the atmospheric conditions. The conditions for lightning are normally hot and humid. There are two types of lightning both formed in different ways the next couple of pages will explain the creation and behaviour of Ball and Fork lightning.

Ball Lightning- Ball lightning is a floating ball of electric charge they do not have a usual speed the speed at which they float depends on the conditions they are in. They make crackling or hissing noises and have been known to enter houses and disappear with a bang often blowing holes in the structure. They are VERY rare.

Fork Lightning- This is lightning that bolts straight to the ground in two prongs often associated with a storm, thunder or rain. It bolts down like this because it is a sudden release of energy rather than a collection of energy mixed with plasma like ball lightning is. Fork lightning is the most common type of lightning it has very many, very precise categories within it. Here are some pictures.

Effects of lightning Lightning has very many effects on the environment it can be very destructive here are some ways in which it can do damage. It can hit tall objects like trees making them fall or setting them alight. Lightning has melted the wing of this plane. This hole was ripped in someone’s ceiling after their house was hit by lightning.

Objects aren’t the only things that get hit by lightning some people do too! Over 1000 people get struck by lightning in America every year and only 100 of those people are likely to die. When you are hit by lightning it will flash and leave few, if any physical signs; it is very likely to blow your clothes off though. The main cause of death if hit by lightning is cardiac arrest (when your circulatory system stops working). If you do survive your nervous system and your brain may suffer damage. People who have been hit by lightning often have memory difficulties, may hatch illnesses such as nausea, headaches, insomnia or may get orientation problems. There is a 1 in 600, 000 chance you’ll be hit by lightning.

Facts about lightning • Each second there are 50 to 100 Cloud-to-Ground Lightning Strikes to the Earth world-wide. • An average lightning strike is between 2 -3 miles long and carry a voltage of 100, 000 volts. (10, 000 amps) • Lightning strikes, like stars, are almost impossible to see during the day but at night it can be seen for 100 miles. • The typical temperature of a lightning bolt is hotter than the surface of the sun. • A typical lightning bolt is only as wide as a 2 pence piece the light it gives off just makes it look bigger.

Greek mythology also contains reference to lightning. There is one myth that says the king of the Gods, Zeus, will throw lightning at you if you sin. Early statues of Buddha showed him holding lightning bolts with arrows on the end.

Lightning in films Lightning can be a symbol of may things power, light, destruction, force and most commonly for speed!