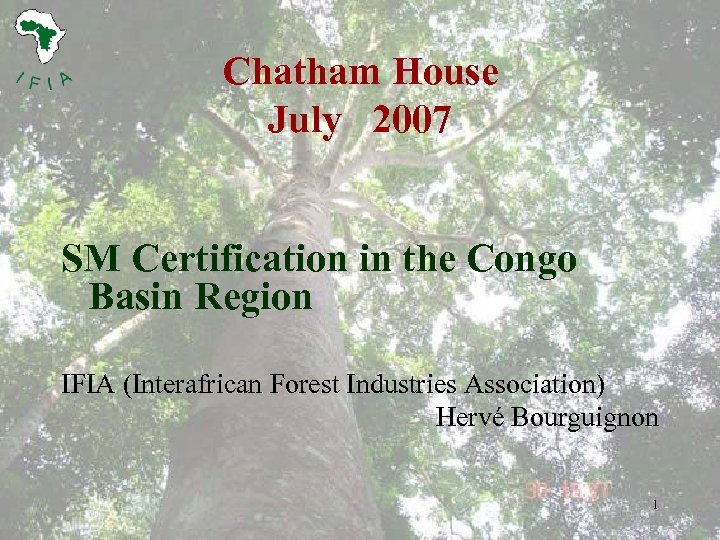 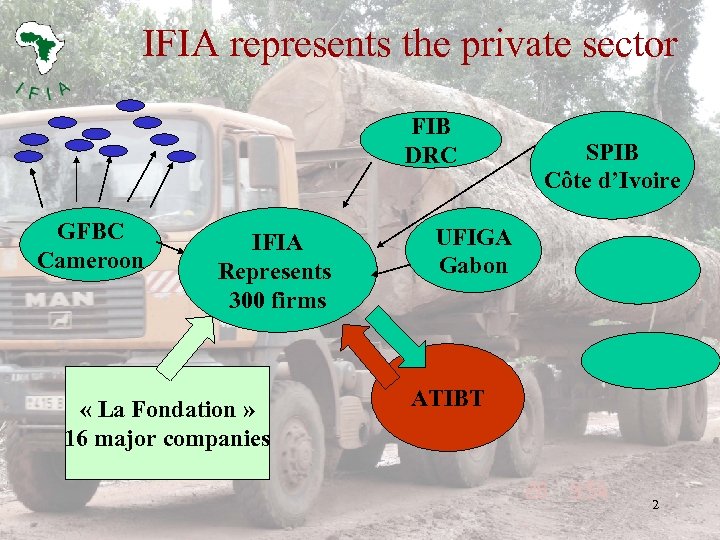 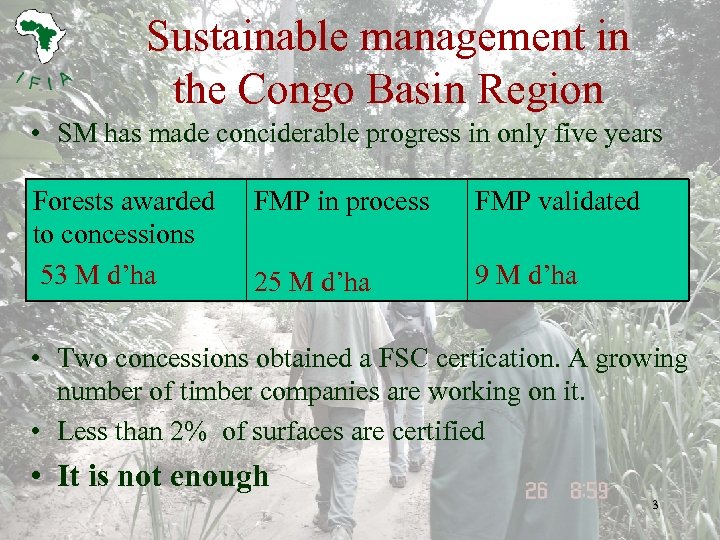 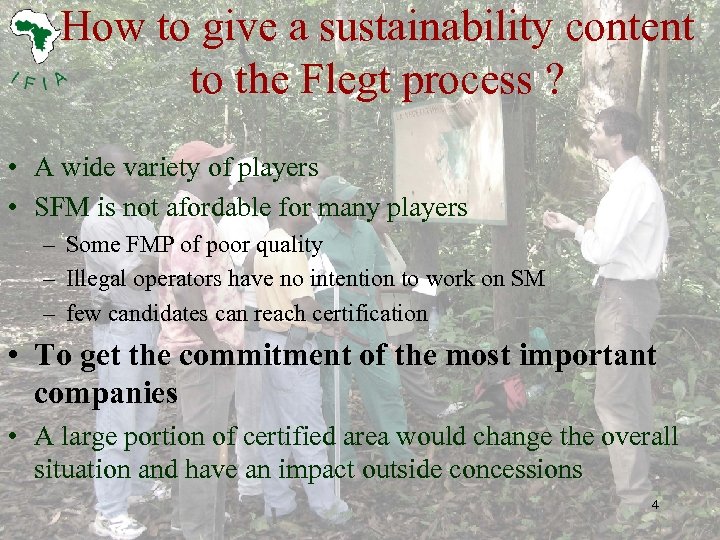 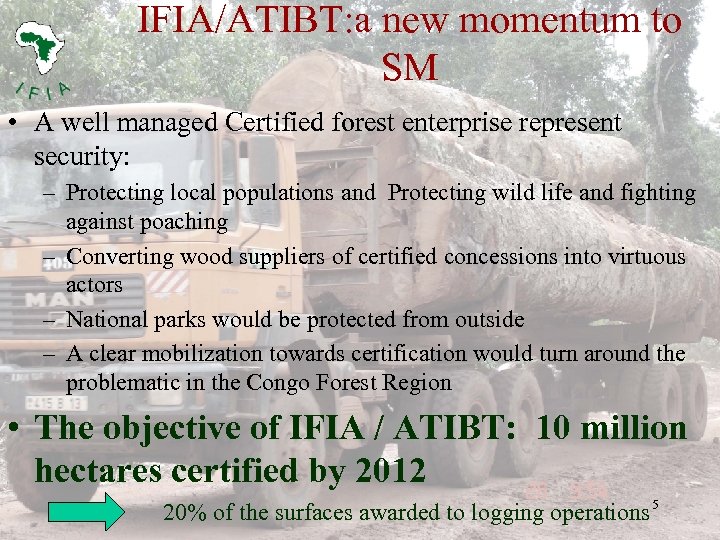 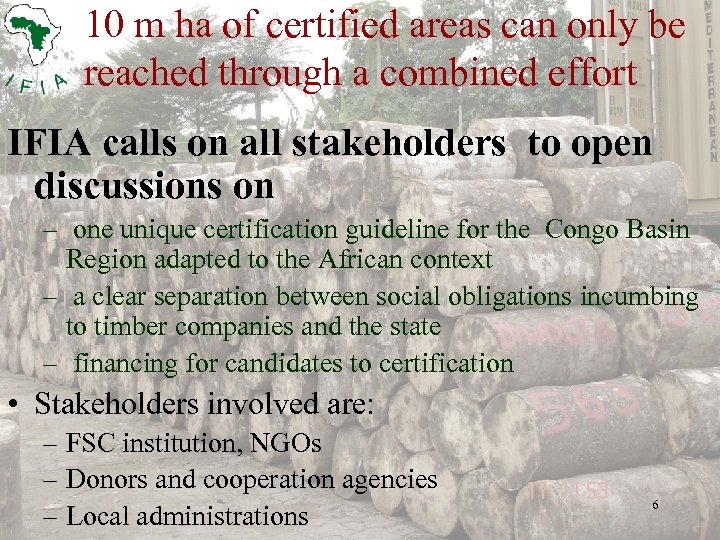 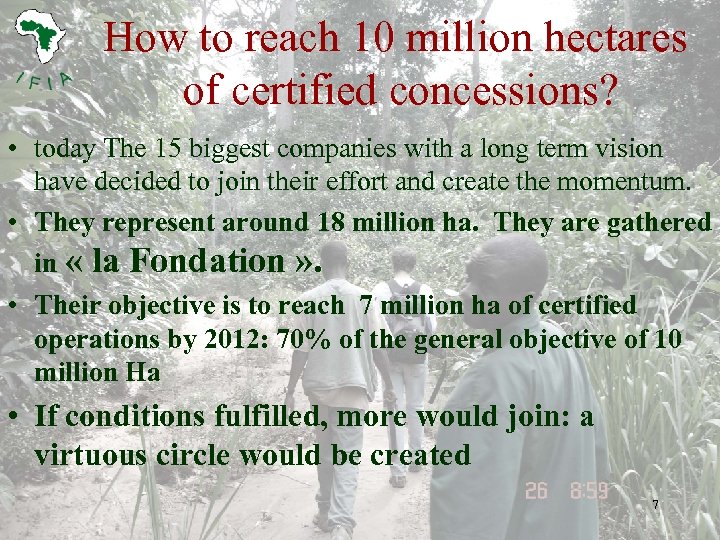 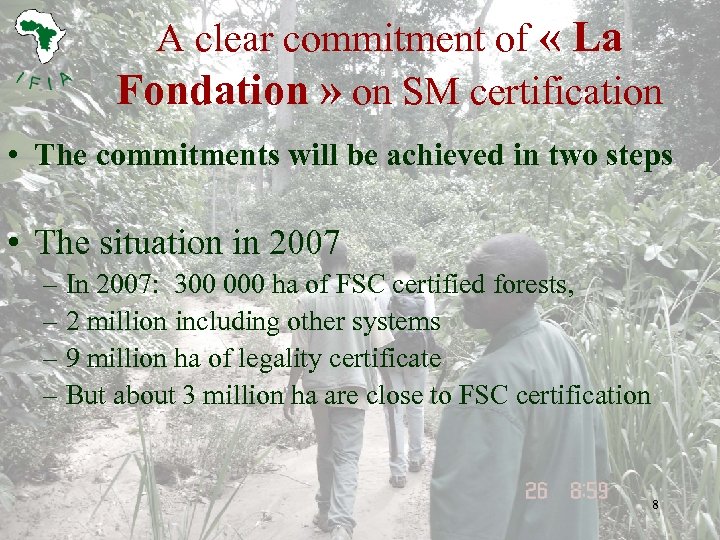 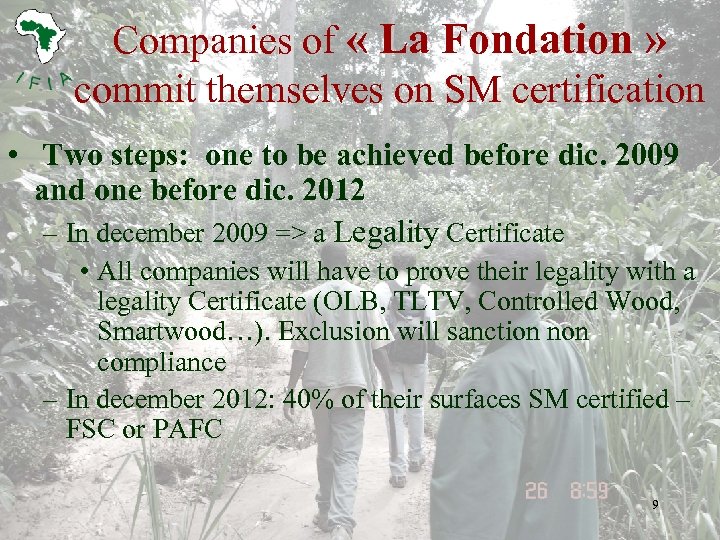 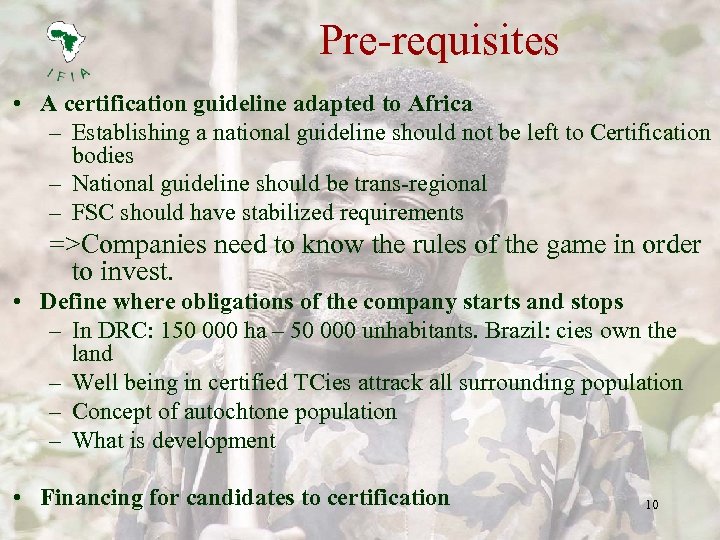 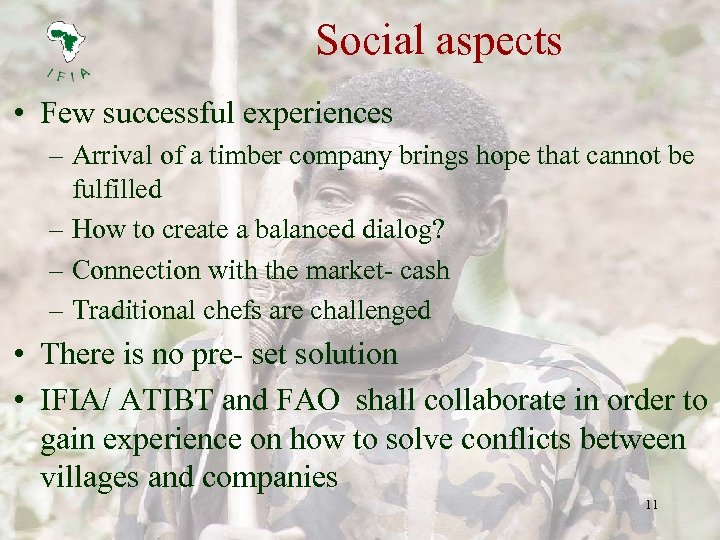 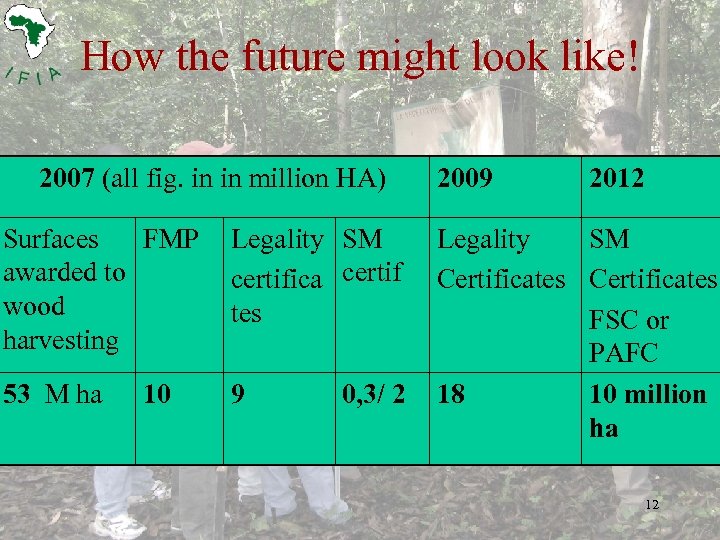 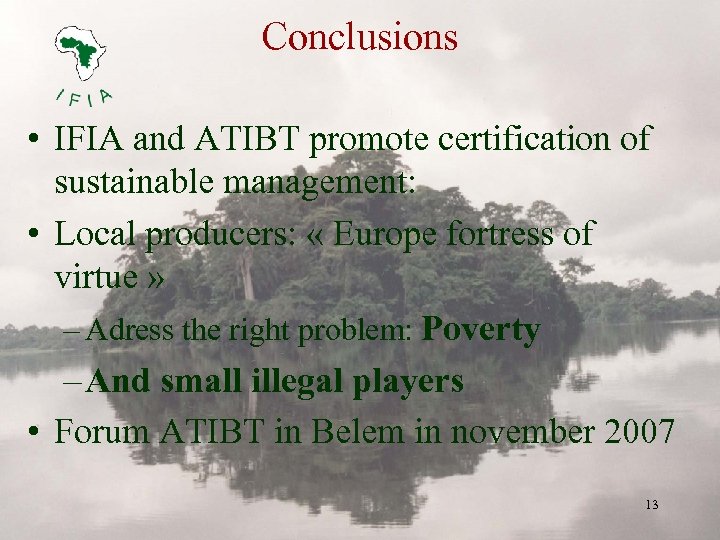 Sustainable management in the Congo Basin Region • SM has made conciderable progress in only five years Forests awarded to concessions 53 M d’ha FMP in process 25 M d’ha FMP validated 9 M d’ha • Two concessions obtained a FSC certication. A growing number of timber companies are working on it. • Less than 2% of surfaces are certified • It is not enough 3

How to give a sustainability content to the Flegt process ? • A wide variety of players • SFM is not afordable for many players – Some FMP of poor quality – Illegal operators have no intention to work on SM – few candidates can reach certification • To get the commitment of the most important companies • A large portion of certified area would change the overall situation and have an impact outside concessions 4

IFIA/ATIBT: a new momentum to SM • A well managed Certified forest enterprise represent security: – Protecting local populations and Protecting wild life and fighting against poaching – Converting wood suppliers of certified concessions into virtuous actors – National parks would be protected from outside – A clear mobilization towards certification would turn around the problematic in the Congo Forest Region • The objective of IFIA / ATIBT: 10 million hectares certified by 2012 20% of the surfaces awarded to logging operations 5

10 m ha of certified areas can only be reached through a combined effort IFIA calls on all stakeholders to open discussions on – one unique certification guideline for the Congo Basin Region adapted to the African context – a clear separation between social obligations incumbing to timber companies and the state – financing for candidates to certification • Stakeholders involved are: – FSC institution, NGOs – Donors and cooperation agencies – Local administrations 6

How to reach 10 million hectares of certified concessions? • today The 15 biggest companies with a long term vision have decided to join their effort and create the momentum. • They represent around 18 million ha. They are gathered in « la Fondation » . • Their objective is to reach 7 million ha of certified operations by 2012: 70% of the general objective of 10 million Ha • If conditions fulfilled, more would join: a virtuous circle would be created 7

A clear commitment of « La Fondation » on SM certification • The commitments will be achieved in two steps • The situation in 2007 – In 2007: 300 000 ha of FSC certified forests, – 2 million including other systems – 9 million ha of legality certificate – But about 3 million ha are close to FSC certification 8

Companies of « La Fondation » commit themselves on SM certification • Two steps: one to be achieved before dic. 2009 and one before dic. 2012 – In december 2009 => a Legality Certificate • All companies will have to prove their legality with a legality Certificate (OLB, TLTV, Controlled Wood, Smartwood…). Exclusion will sanction non compliance – In december 2012: 40% of their surfaces SM certified – FSC or PAFC 9

Pre-requisites • A certification guideline adapted to Africa – Establishing a national guideline should not be left to Certification bodies – National guideline should be trans-regional – FSC should have stabilized requirements =>Companies need to know the rules of the game in order to invest. • Define where obligations of the company starts and stops – In DRC: 150 000 ha – 50 000 unhabitants. Brazil: cies own the land – Well being in certified TCies attrack all surrounding population – Concept of autochtone population – What is development • Financing for candidates to certification 10

Social aspects • Few successful experiences – Arrival of a timber company brings hope that cannot be fulfilled – How to create a balanced dialog? – Connection with the market- cash – Traditional chefs are challenged • There is no pre- set solution • IFIA/ ATIBT and FAO shall collaborate in order to gain experience on how to solve conflicts between villages and companies 11