Chapter 3 study guide 1 As the 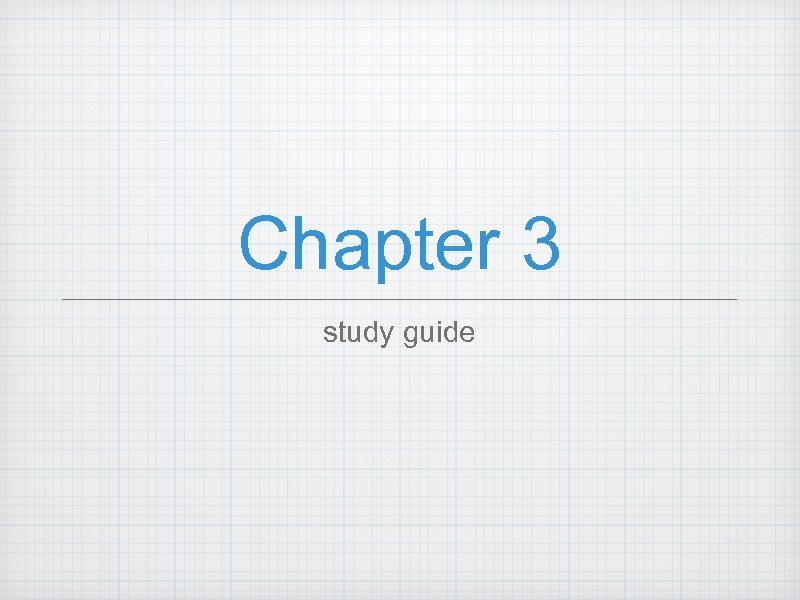 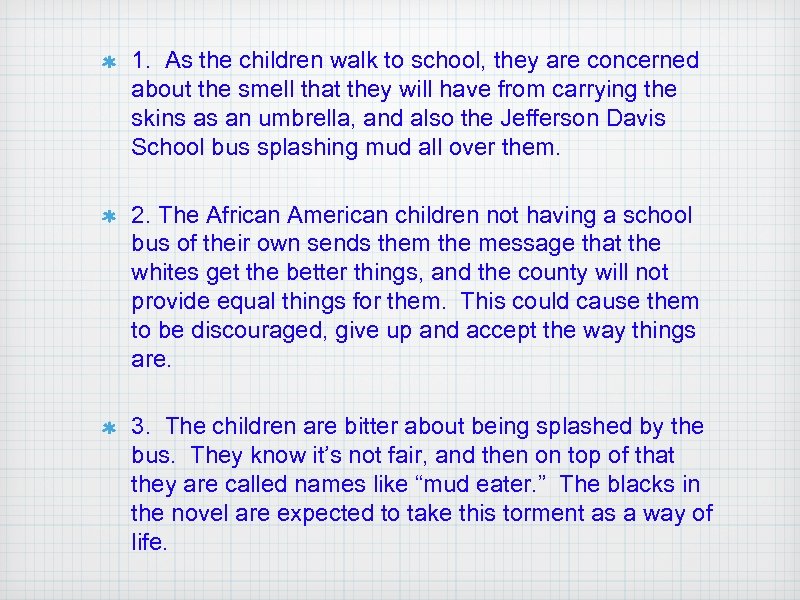 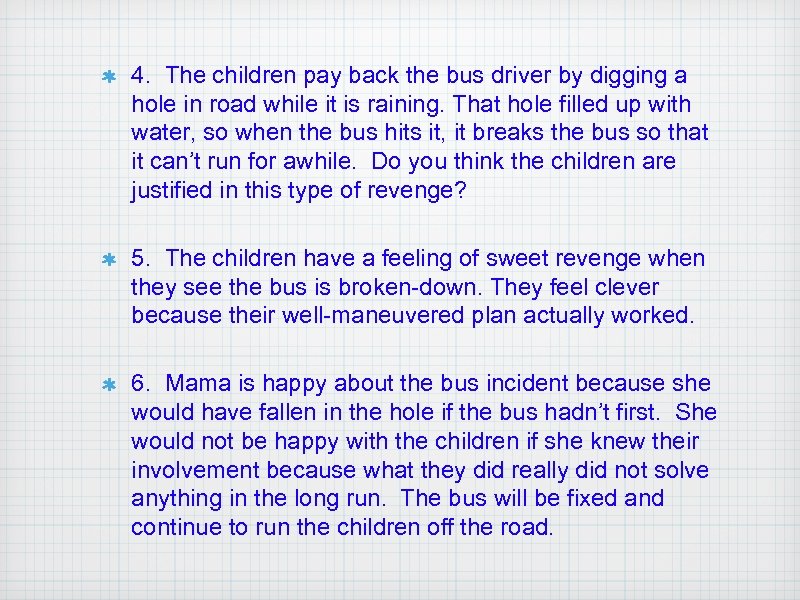 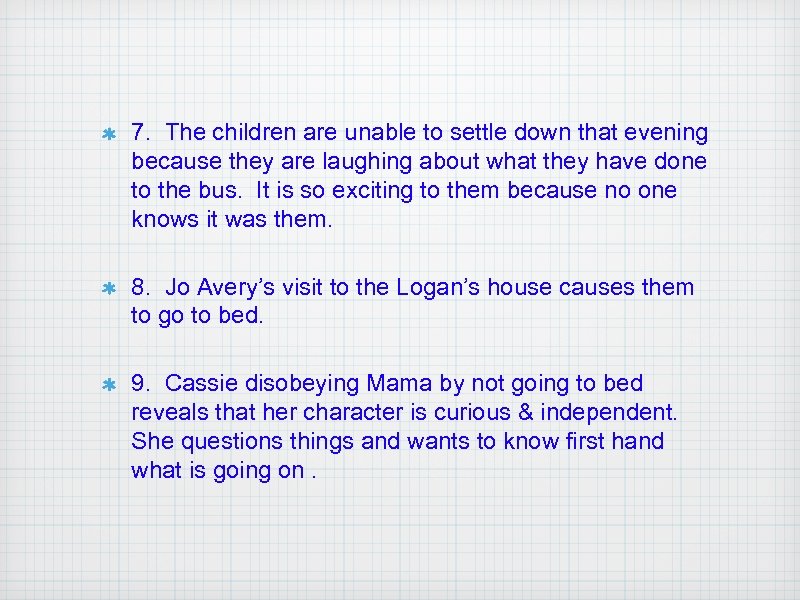 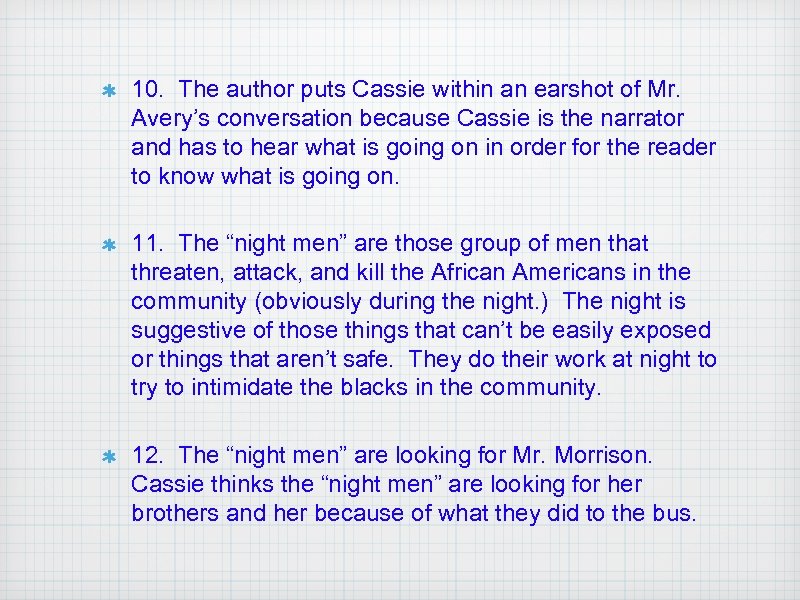 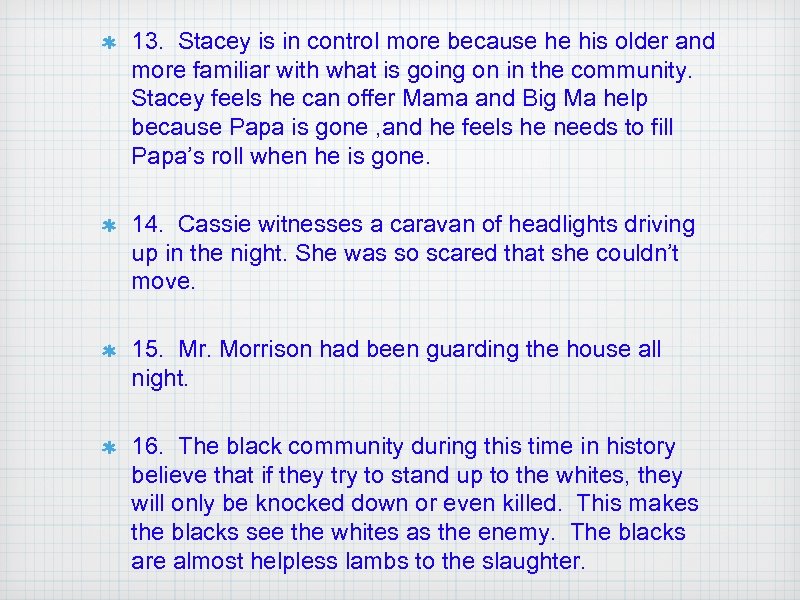 1. As the children walk to school, they are concerned about the smell that they will have from carrying the skins as an umbrella, and also the Jefferson Davis School bus splashing mud all over them. 2. The African American children not having a school bus of their own sends them the message that the whites get the better things, and the county will not provide equal things for them. This could cause them to be discouraged, give up and accept the way things are. 3. The children are bitter about being splashed by the bus. They know it’s not fair, and then on top of that they are called names like “mud eater. ” The blacks in the novel are expected to take this torment as a way of life.

4. The children pay back the bus driver by digging a hole in road while it is raining. That hole filled up with water, so when the bus hits it, it breaks the bus so that it can’t run for awhile. Do you think the children are justified in this type of revenge? 5. The children have a feeling of sweet revenge when they see the bus is broken-down. They feel clever because their well-maneuvered plan actually worked. 6. Mama is happy about the bus incident because she would have fallen in the hole if the bus hadn’t first. She would not be happy with the children if she knew their involvement because what they did really did not solve anything in the long run. The bus will be fixed and continue to run the children off the road.

7. The children are unable to settle down that evening because they are laughing about what they have done to the bus. It is so exciting to them because no one knows it was them. 8. Jo Avery’s visit to the Logan’s house causes them to go to bed. 9. Cassie disobeying Mama by not going to bed reveals that her character is curious & independent. She questions things and wants to know first hand what is going on.

10. The author puts Cassie within an earshot of Mr. Avery’s conversation because Cassie is the narrator and has to hear what is going on in order for the reader to know what is going on. 11. The “night men” are those group of men that threaten, attack, and kill the African Americans in the community (obviously during the night. ) The night is suggestive of those things that can’t be easily exposed or things that aren’t safe. They do their work at night to try to intimidate the blacks in the community. 12. The “night men” are looking for Mr. Morrison. Cassie thinks the “night men” are looking for her brothers and her because of what they did to the bus.

13. Stacey is in control more because he his older and more familiar with what is going on in the community. Stacey feels he can offer Mama and Big Ma help because Papa is gone , and he feels he needs to fill Papa’s roll when he is gone. 14. Cassie witnesses a caravan of headlights driving up in the night. She was so scared that she couldn’t move. 15. Mr. Morrison had been guarding the house all night. 16. The black community during this time in history believe that if they try to stand up to the whites, they will only be knocked down or even killed. This makes the blacks see the whites as the enemy. The blacks are almost helpless lambs to the slaughter.