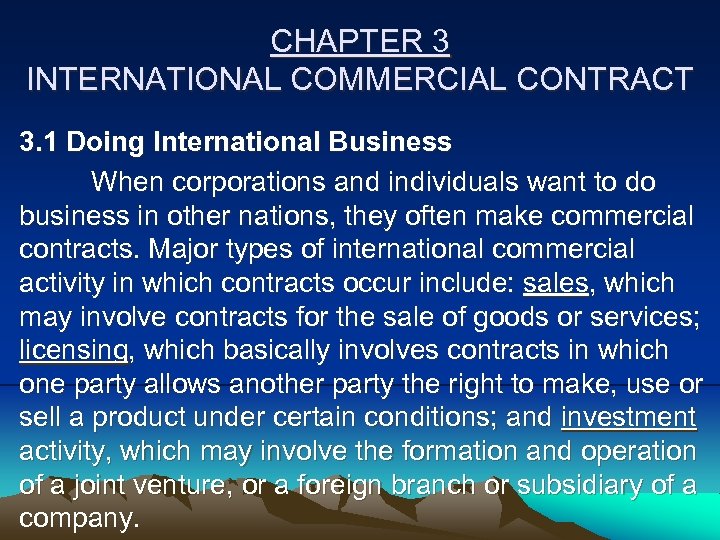 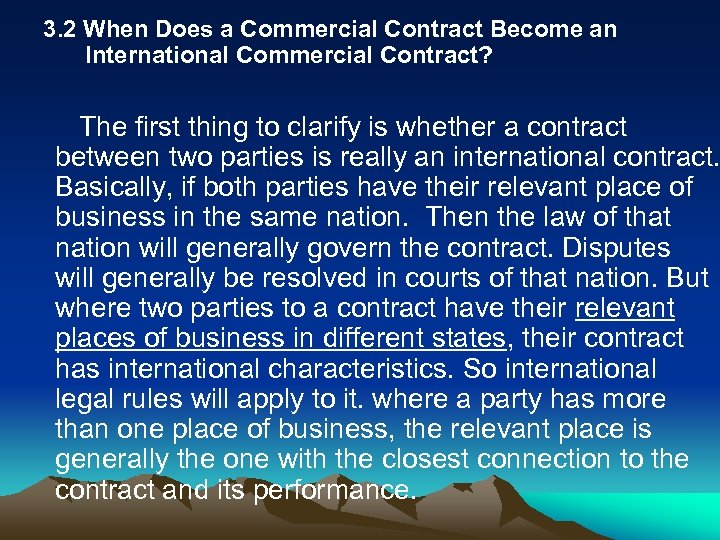 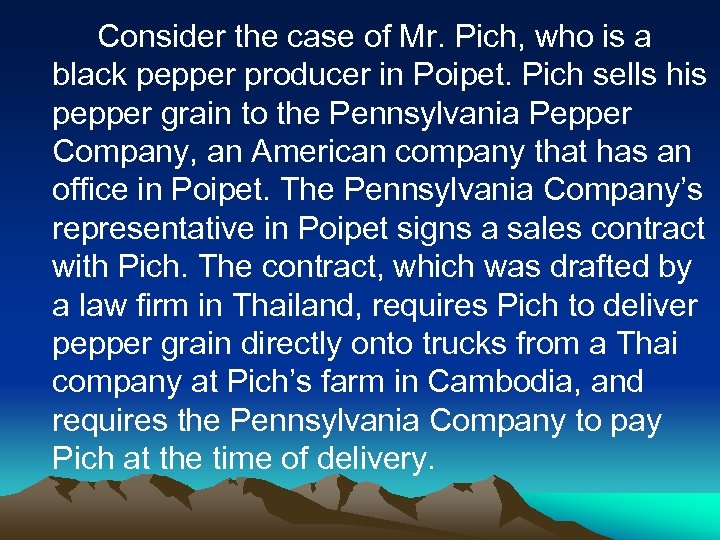 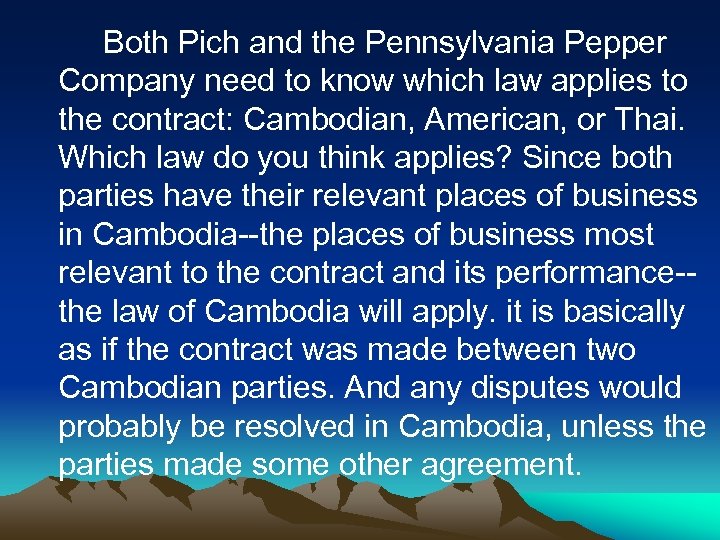 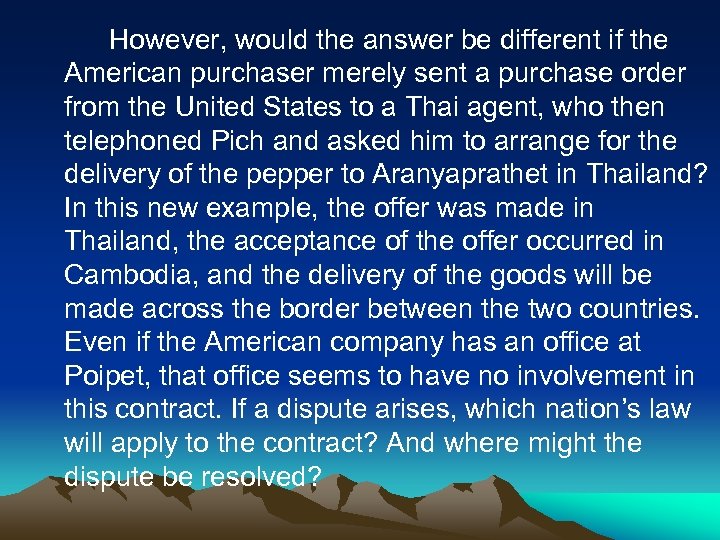 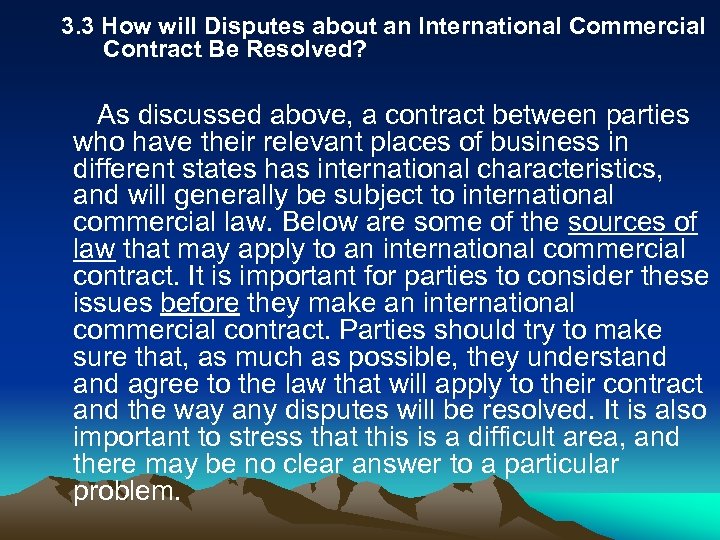 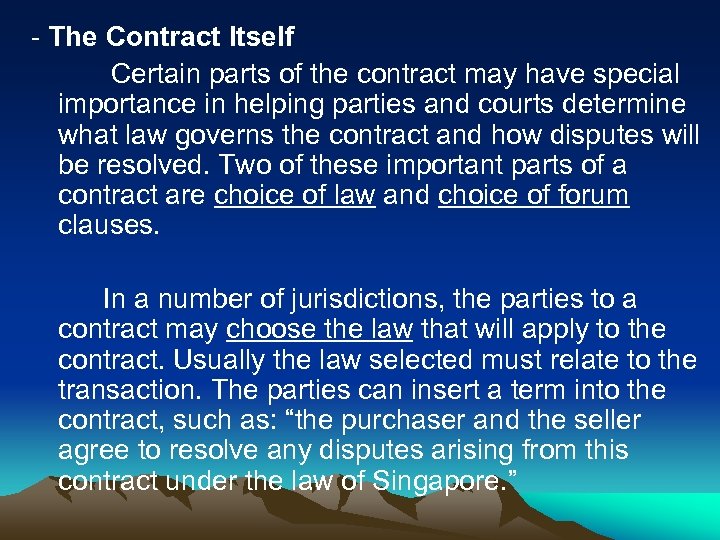 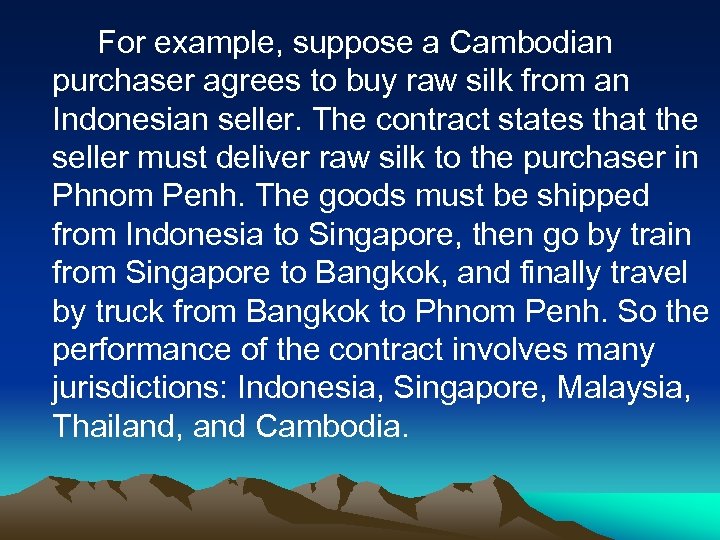 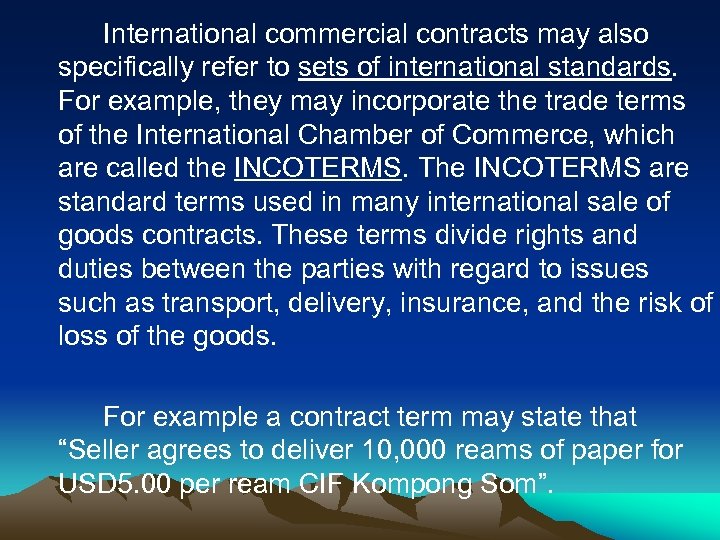 CHAPTER 3 INTERNATIONAL COMMERCIAL CONTRACT 3. 1 Doing International Business When corporations and individuals want to do business in other nations, they often make commercial contracts. Major types of international commercial activity in which contracts occur include: sales, which may involve contracts for the sale of goods or services; licensing, which basically involves contracts in which one party allows another party the right to make, use or sell a product under certain conditions; and investment activity, which may involve the formation and operation of a joint venture, or a foreign branch or subsidiary of a company.

3. 2 When Does a Commercial Contract Become an International Commercial Contract? The first thing to clarify is whether a contract between two parties is really an international contract. Basically, if both parties have their relevant place of business in the same nation. Then the law of that nation will generally govern the contract. Disputes will generally be resolved in courts of that nation. But where two parties to a contract have their relevant places of business in different states, their contract has international characteristics. So international legal rules will apply to it. where a party has more than one place of business, the relevant place is generally the one with the closest connection to the contract and its performance.

Consider the case of Mr. Pich, who is a black pepper producer in Poipet. Pich sells his pepper grain to the Pennsylvania Pepper Company, an American company that has an office in Poipet. The Pennsylvania Company’s representative in Poipet signs a sales contract with Pich. The contract, which was drafted by a law firm in Thailand, requires Pich to deliver pepper grain directly onto trucks from a Thai company at Pich’s farm in Cambodia, and requires the Pennsylvania Company to pay Pich at the time of delivery.

Both Pich and the Pennsylvania Pepper Company need to know which law applies to the contract: Cambodian, American, or Thai. Which law do you think applies? Since both parties have their relevant places of business in Cambodia--the places of business most relevant to the contract and its performance-the law of Cambodia will apply. it is basically as if the contract was made between two Cambodian parties. And any disputes would probably be resolved in Cambodia, unless the parties made some other agreement.

However, would the answer be different if the American purchaser merely sent a purchase order from the United States to a Thai agent, who then telephoned Pich and asked him to arrange for the delivery of the pepper to Aranyaprathet in Thailand? In this new example, the offer was made in Thailand, the acceptance of the offer occurred in Cambodia, and the delivery of the goods will be made across the border between the two countries. Even if the American company has an office at Poipet, that office seems to have no involvement in this contract. If a dispute arises, which nation’s law will apply to the contract? And where might the dispute be resolved?

- The Contract Itself Certain parts of the contract may have special importance in helping parties and courts determine what law governs the contract and how disputes will be resolved. Two of these important parts of a contract are choice of law and choice of forum clauses. In a number of jurisdictions, the parties to a contract may choose the law that will apply to the contract. Usually the law selected must relate to the transaction. The parties can insert a term into the contract, such as: “the purchaser and the seller agree to resolve any disputes arising from this contract under the law of Singapore. ”

For example, suppose a Cambodian purchaser agrees to buy raw silk from an Indonesian seller. The contract states that the seller must deliver raw silk to the purchaser in Phnom Penh. The goods must be shipped from Indonesia to Singapore, then go by train from Singapore to Bangkok, and finally travel by truck from Bangkok to Phnom Penh. So the performance of the contract involves many jurisdictions: Indonesia, Singapore, Malaysia, Thailand, and Cambodia.

International commercial contracts may also specifically refer to sets of international standards. For example, they may incorporate the trade terms of the International Chamber of Commerce, which are called the INCOTERMS. The INCOTERMS are standard terms used in many international sale of goods contracts. These terms divide rights and duties between the parties with regard to issues such as transport, delivery, insurance, and the risk of loss of the goods. For example a contract term may state that “Seller agrees to deliver 10, 000 reams of paper for USD 5. 00 per ream CIF Kompong Som”.