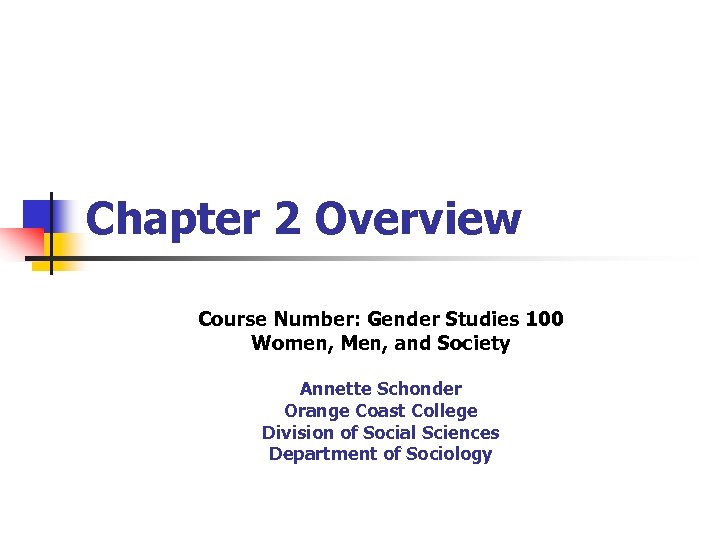 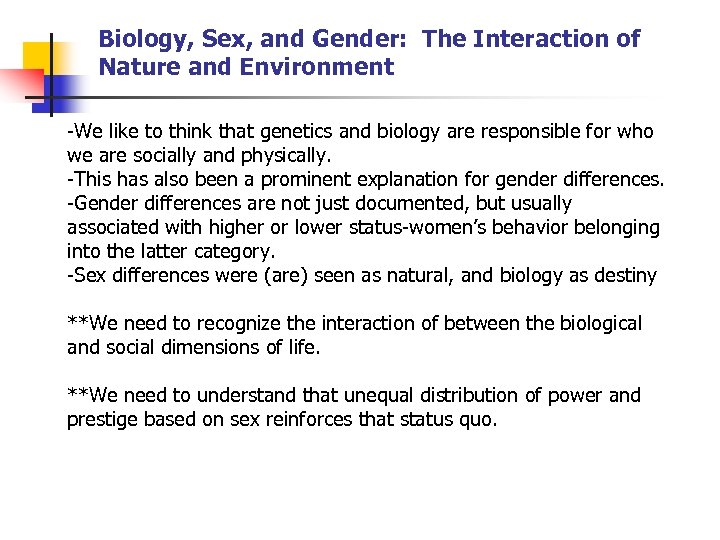 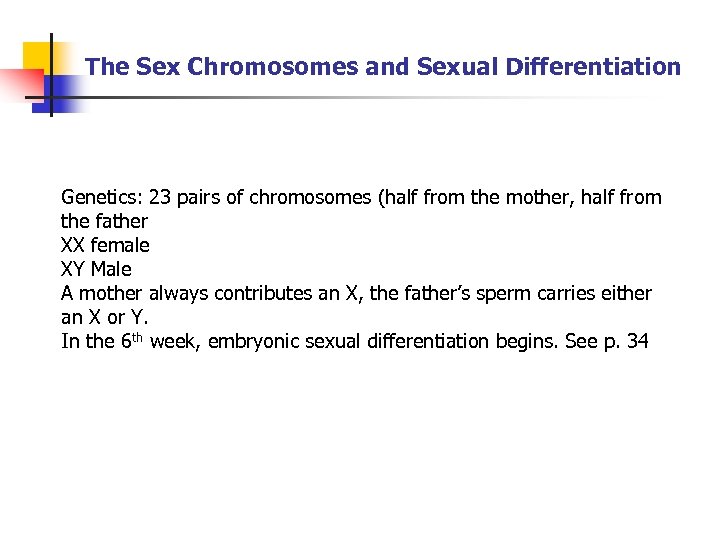 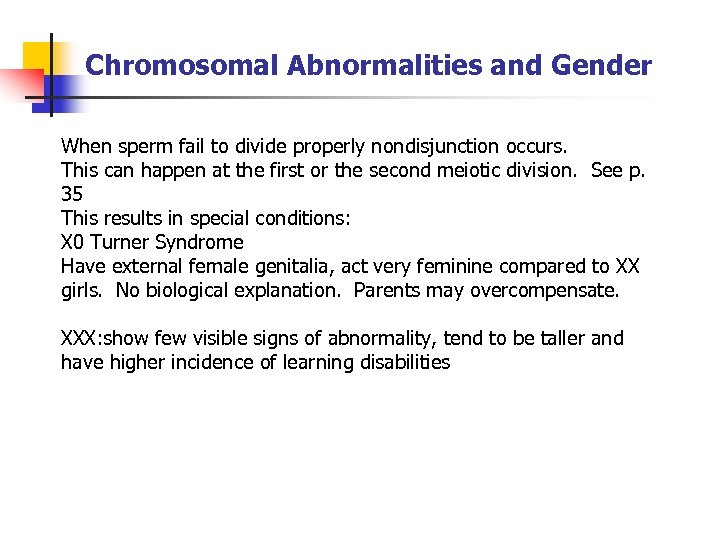 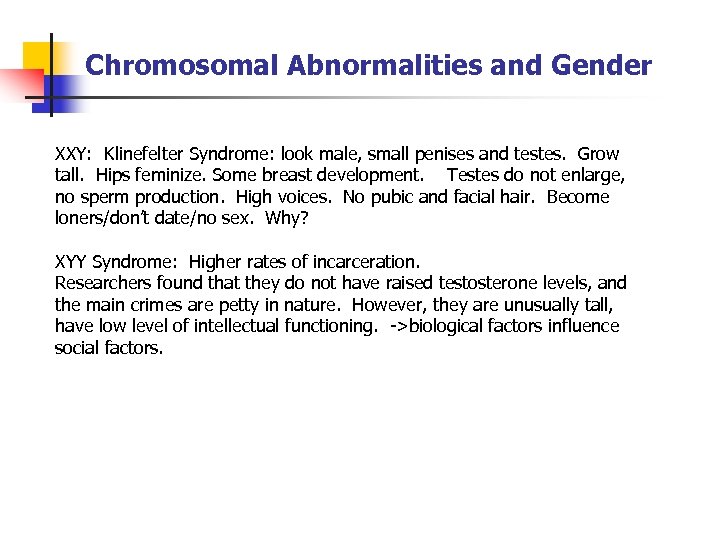 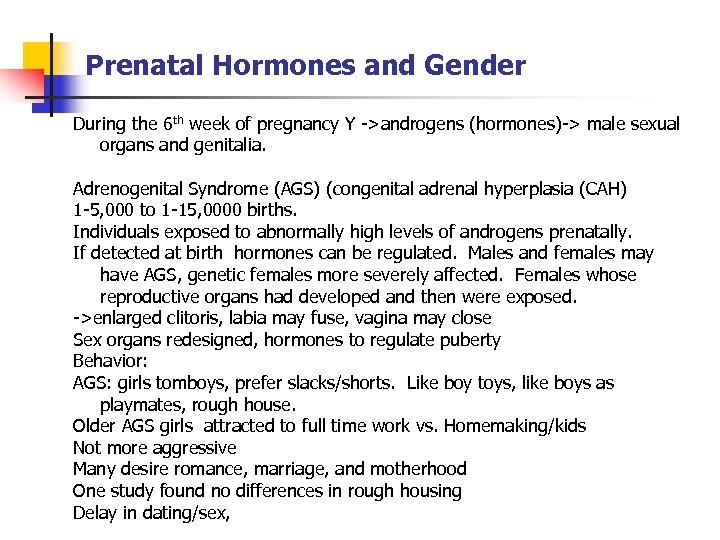 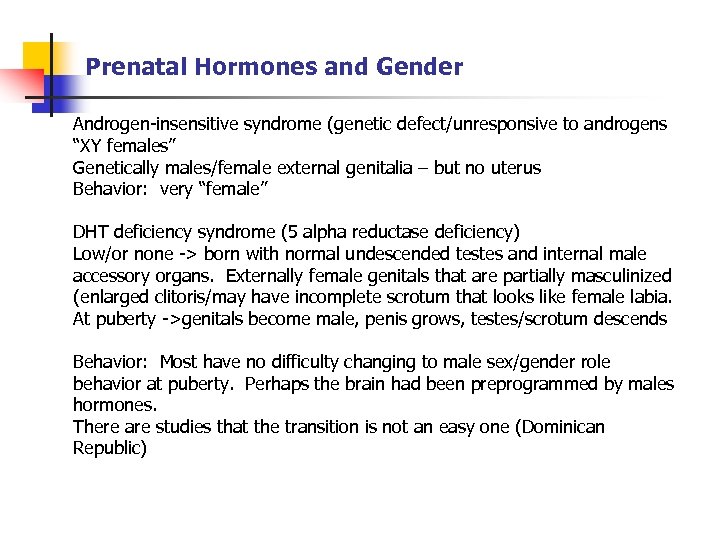 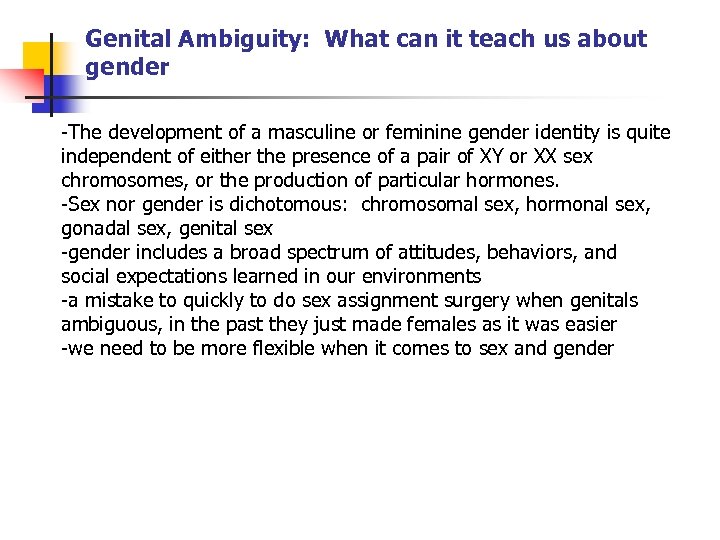 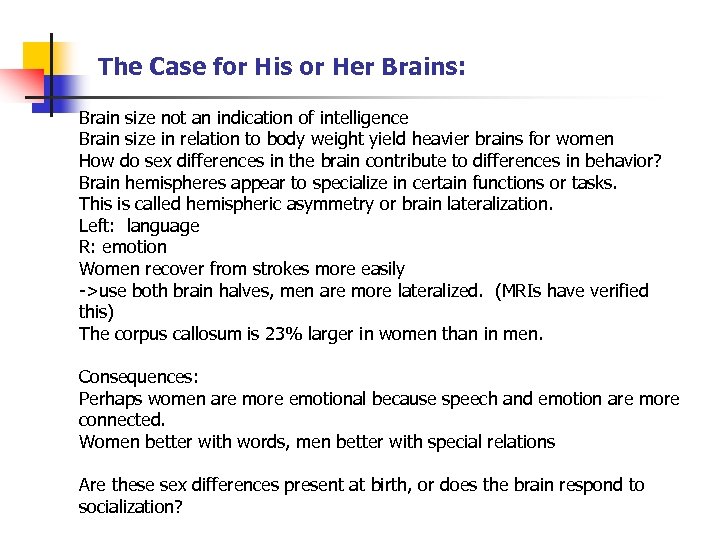 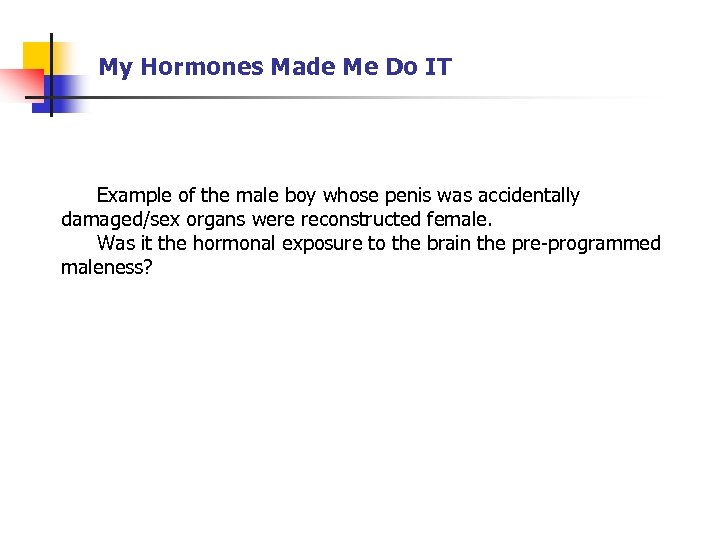 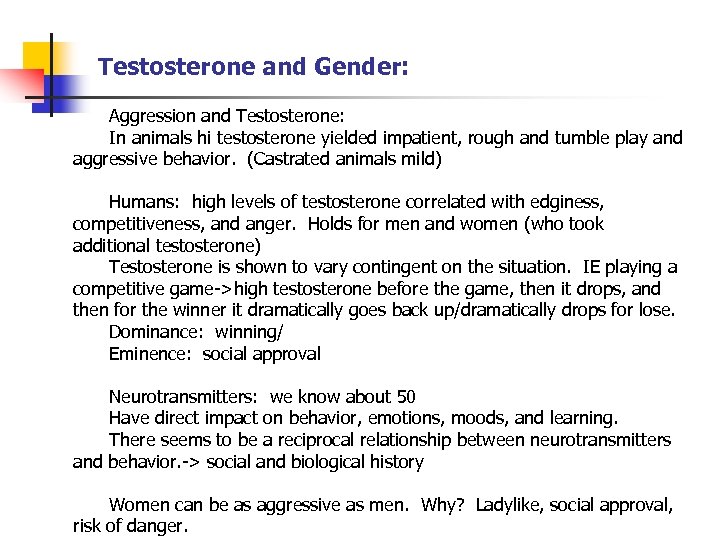 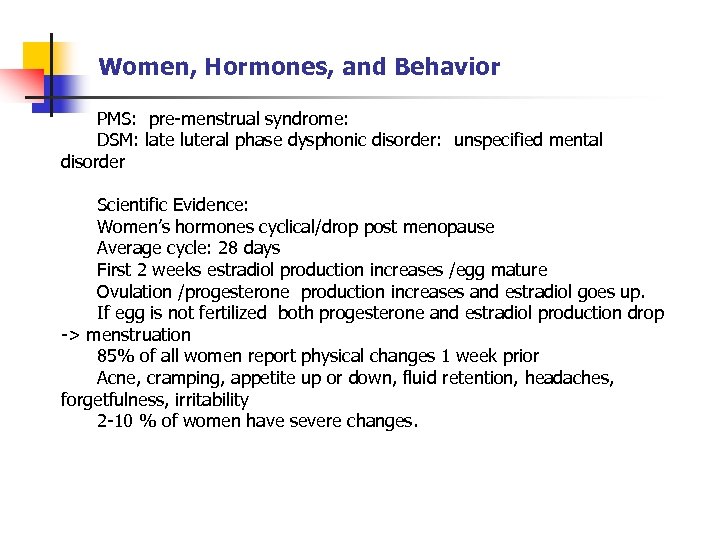 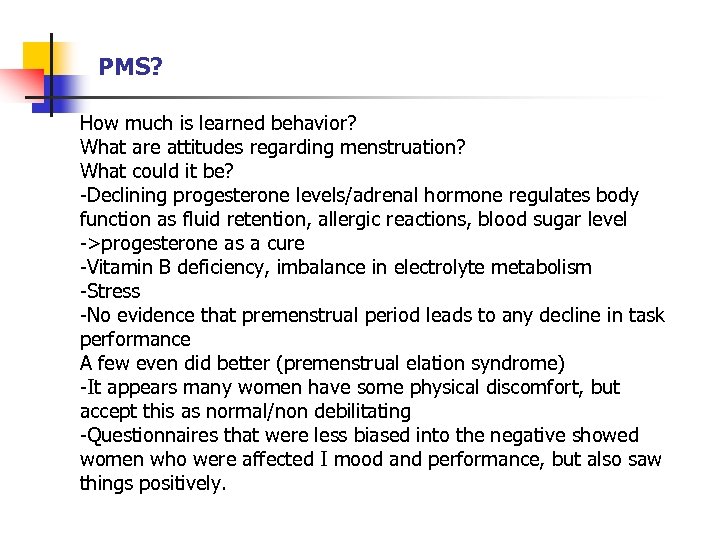 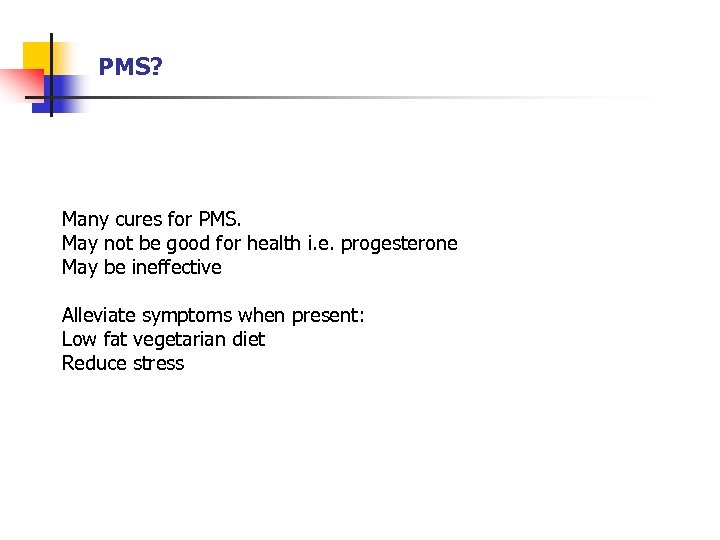 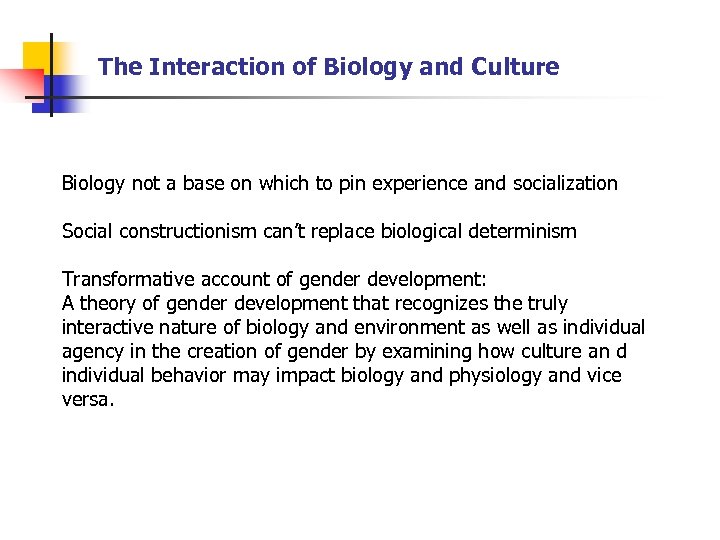 Biology, Sex, and Gender: The Interaction of Nature and Environment -We like to think that genetics and biology are responsible for who we are socially and physically. -This has also been a prominent explanation for gender differences. -Gender differences are not just documented, but usually associated with higher or lower status-women’s behavior belonging into the latter category. -Sex differences were (are) seen as natural, and biology as destiny **We need to recognize the interaction of between the biological and social dimensions of life. **We need to understand that unequal distribution of power and prestige based on sex reinforces that status quo.

Chromosomal Abnormalities and Gender XXY: Klinefelter Syndrome: look male, small penises and testes. Grow tall. Hips feminize. Some breast development. Testes do not enlarge, no sperm production. High voices. No pubic and facial hair. Become loners/don’t date/no sex. Why? XYY Syndrome: Higher rates of incarceration. Researchers found that they do not have raised testosterone levels, and the main crimes are petty in nature. However, they are unusually tall, have low level of intellectual functioning. ->biological factors influence social factors.

Genital Ambiguity: What can it teach us about gender -The development of a masculine or feminine gender identity is quite independent of either the presence of a pair of XY or XX sex chromosomes, or the production of particular hormones. -Sex nor gender is dichotomous: chromosomal sex, hormonal sex, gonadal sex, genital sex -gender includes a broad spectrum of attitudes, behaviors, and social expectations learned in our environments -a mistake to quickly to do sex assignment surgery when genitals ambiguous, in the past they just made females as it was easier -we need to be more flexible when it comes to sex and gender

The Case for His or Her Brains: Brain size not an indication of intelligence Brain size in relation to body weight yield heavier brains for women How do sex differences in the brain contribute to differences in behavior? Brain hemispheres appear to specialize in certain functions or tasks. This is called hemispheric asymmetry or brain lateralization. Left: language R: emotion Women recover from strokes more easily ->use both brain halves, men are more lateralized. (MRIs have verified this) The corpus callosum is 23% larger in women than in men. Consequences: Perhaps women are more emotional because speech and emotion are more connected. Women better with words, men better with special relations Are these sex differences present at birth, or does the brain respond to socialization?

My Hormones Made Me Do IT Example of the male boy whose penis was accidentally damaged/sex organs were reconstructed female. Was it the hormonal exposure to the brain the pre-programmed maleness?

Testosterone and Gender: Aggression and Testosterone: In animals hi testosterone yielded impatient, rough and tumble play and aggressive behavior. (Castrated animals mild) Humans: high levels of testosterone correlated with edginess, competitiveness, and anger. Holds for men and women (who took additional testosterone) Testosterone is shown to vary contingent on the situation. IE playing a competitive game->high testosterone before the game, then it drops, and then for the winner it dramatically goes back up/dramatically drops for lose. Dominance: winning/ Eminence: social approval Neurotransmitters: we know about 50 Have direct impact on behavior, emotions, moods, and learning. There seems to be a reciprocal relationship between neurotransmitters and behavior. -> social and biological history Women can be as aggressive as men. Why? Ladylike, social approval, risk of danger.

PMS? How much is learned behavior? What are attitudes regarding menstruation? What could it be? -Declining progesterone levels/adrenal hormone regulates body function as fluid retention, allergic reactions, blood sugar level ->progesterone as a cure -Vitamin B deficiency, imbalance in electrolyte metabolism -Stress -No evidence that premenstrual period leads to any decline in task performance A few even did better (premenstrual elation syndrome) -It appears many women have some physical discomfort, but accept this as normal/non debilitating -Questionnaires that were less biased into the negative showed women who were affected I mood and performance, but also saw things positively.

PMS? Many cures for PMS. May not be good for health i. e. progesterone May be ineffective Alleviate symptoms when present: Low fat vegetarian diet Reduce stress