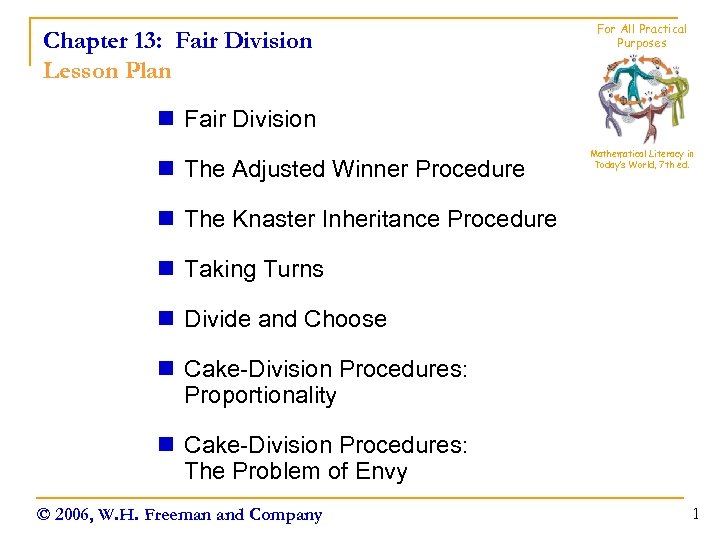 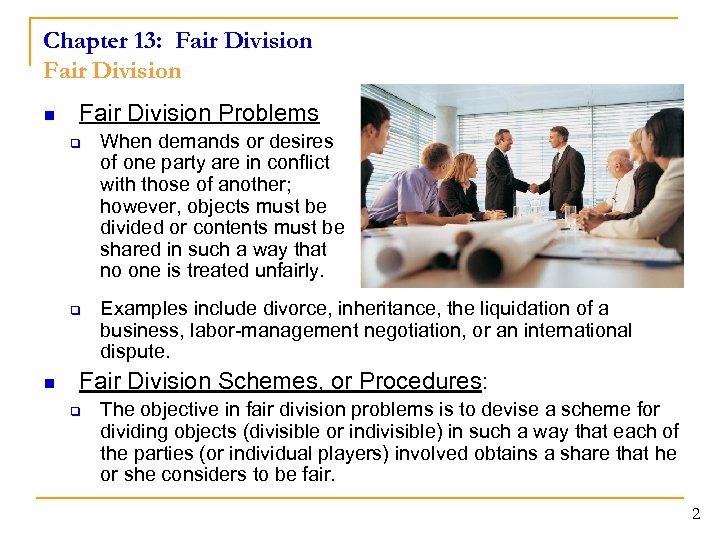 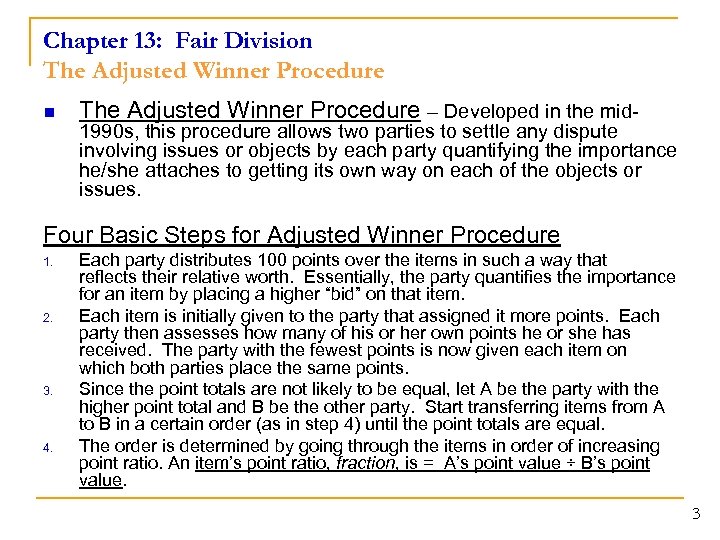 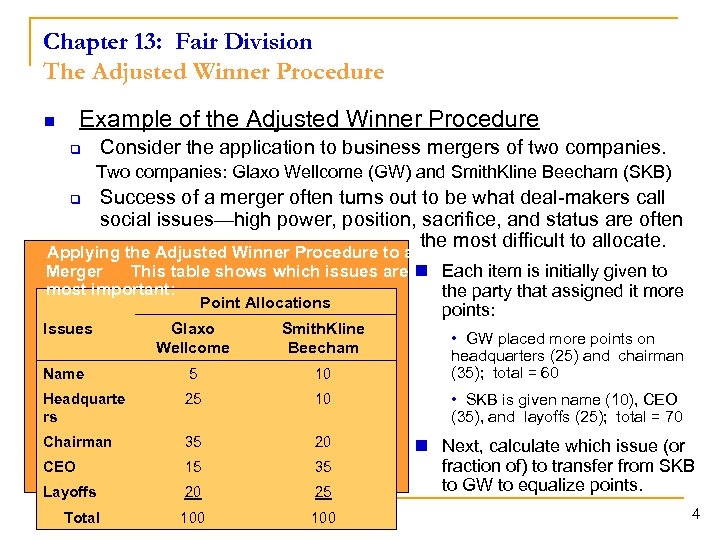 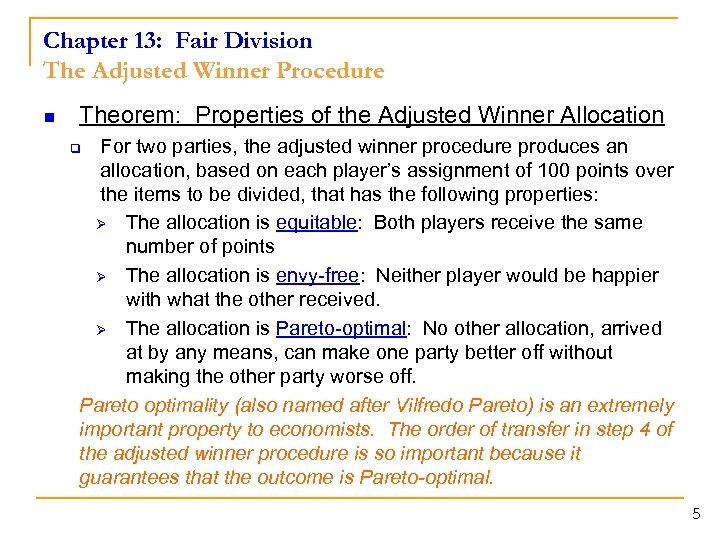 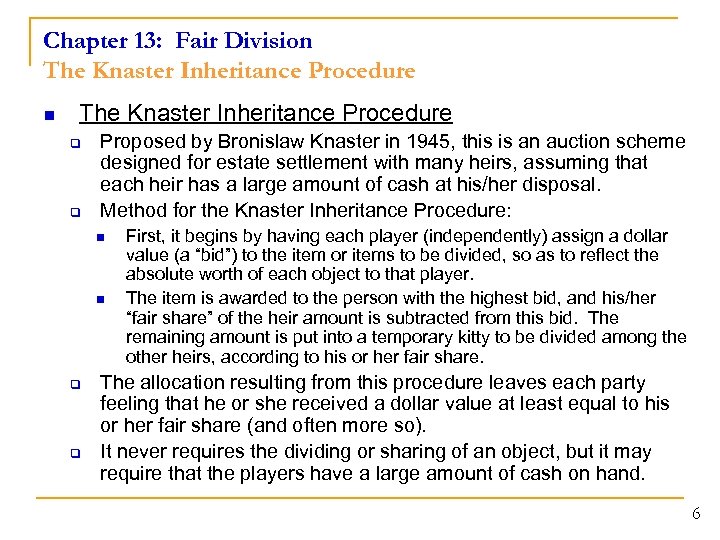 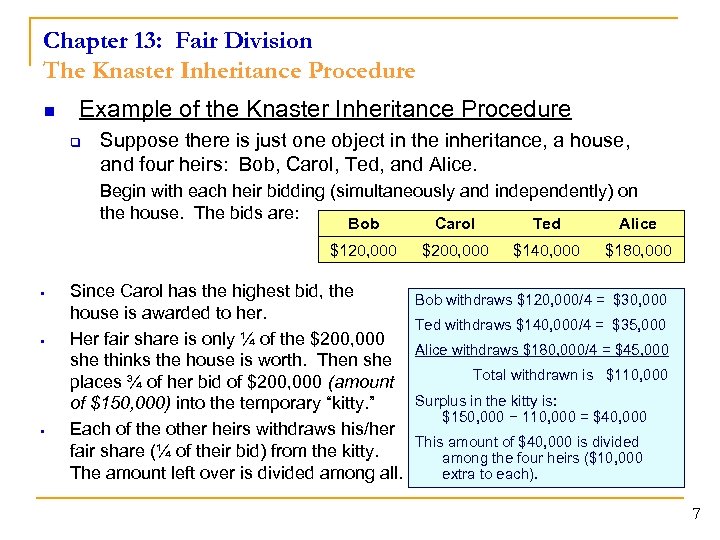 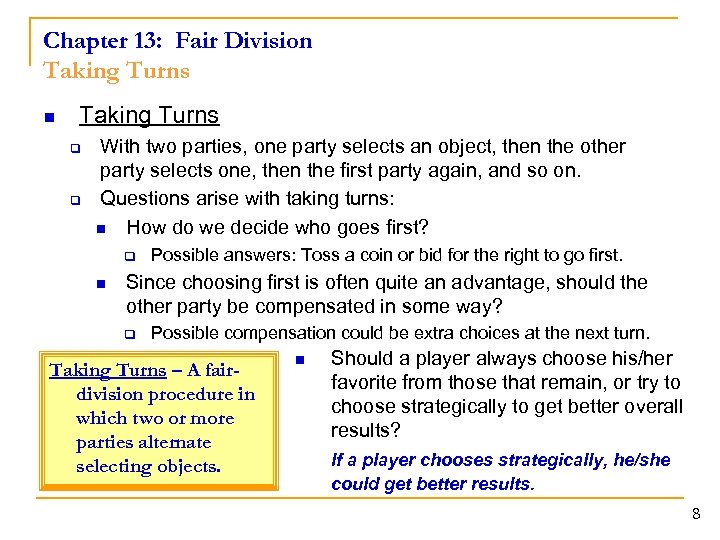 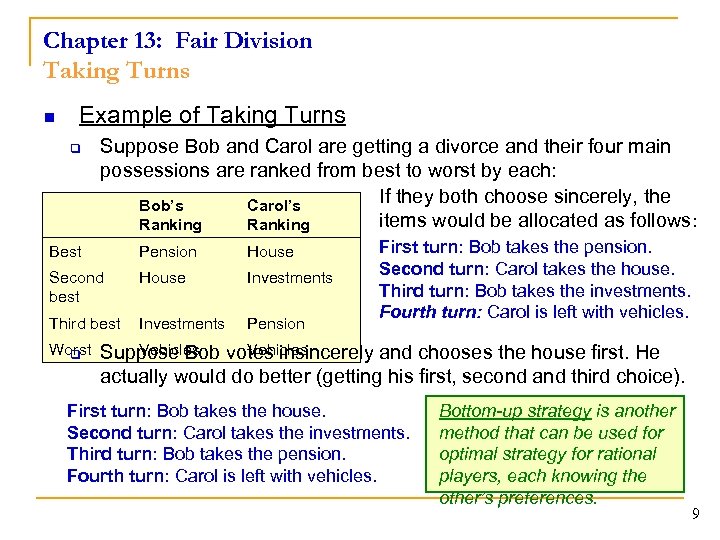 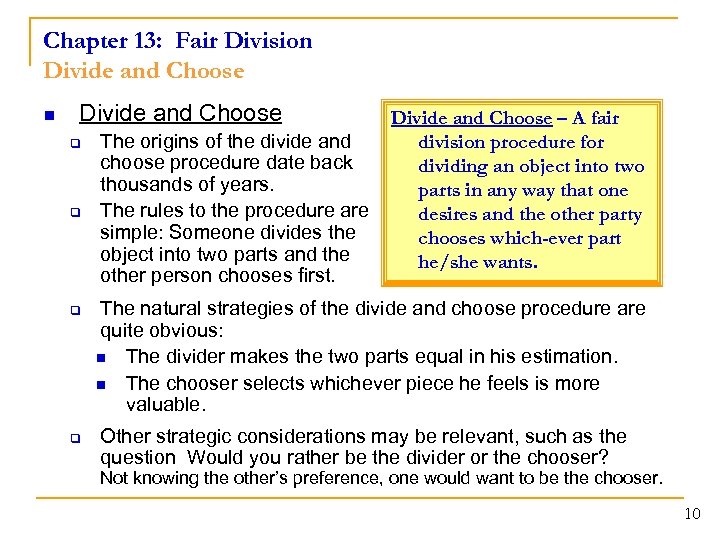 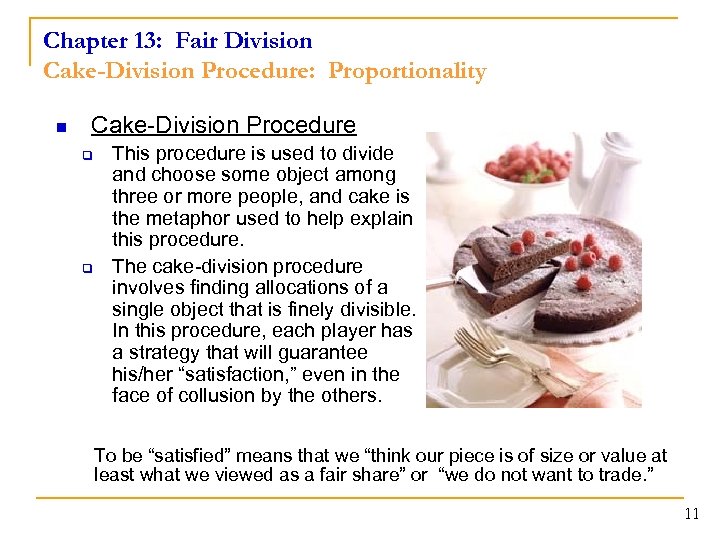 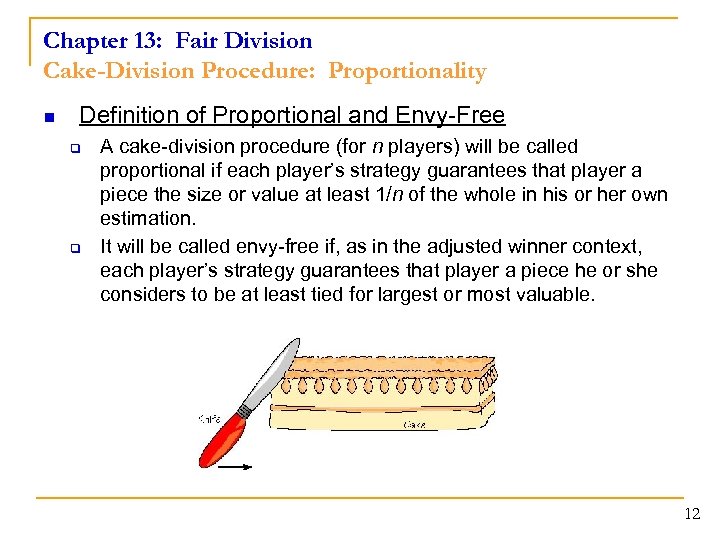 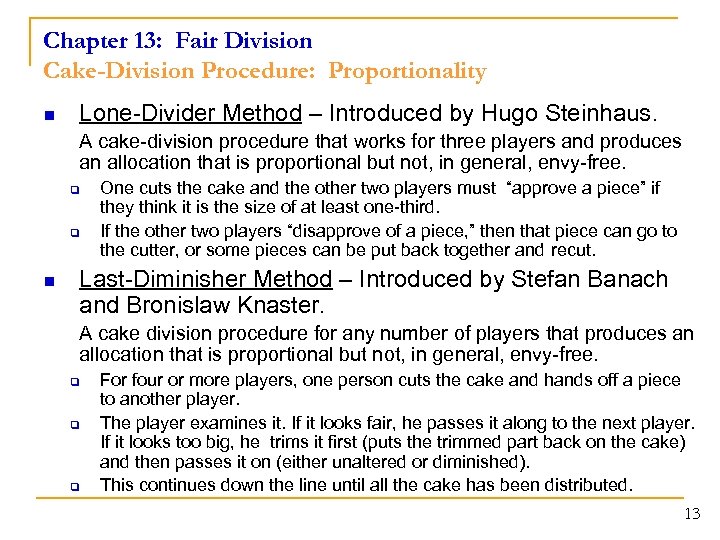 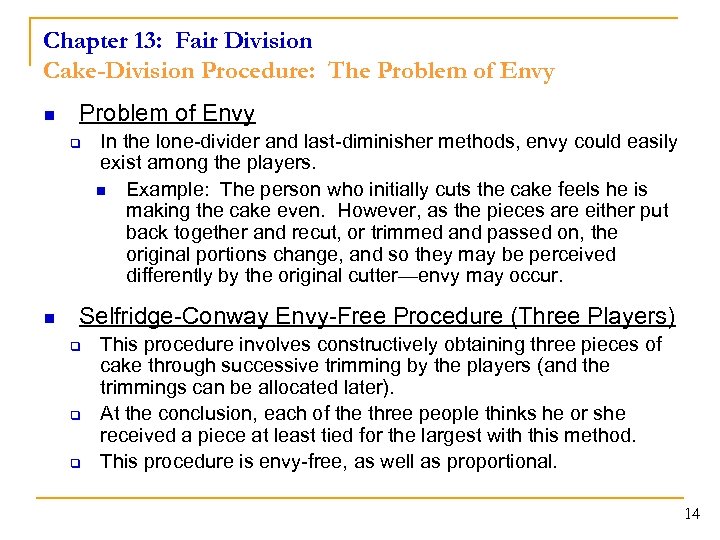 Chapter 13: Fair Division n Fair Division Problems q q n When demands or desires of one party are in conflict with those of another; however, objects must be divided or contents must be shared in such a way that no one is treated unfairly. Examples include divorce, inheritance, the liquidation of a business, labor-management negotiation, or an international dispute. Fair Division Schemes, or Procedures: q The objective in fair division problems is to devise a scheme for dividing objects (divisible or indivisible) in such a way that each of the parties (or individual players) involved obtains a share that he or she considers to be fair. 2

Chapter 13: Fair Division The Adjusted Winner Procedure – Developed in the mid- 1990 s, this procedure allows two parties to settle any dispute involving issues or objects by each party quantifying the importance he/she attaches to getting its own way on each of the objects or issues. Four Basic Steps for Adjusted Winner Procedure 1. 2. 3. 4. Each party distributes 100 points over the items in such a way that reflects their relative worth. Essentially, the party quantifies the importance for an item by placing a higher “bid” on that item. Each item is initially given to the party that assigned it more points. Each party then assesses how many of his or her own points he or she has received. The party with the fewest points is now given each item on which both parties place the same points. Since the point totals are not likely to be equal, let A be the party with the higher point total and B be the other party. Start transferring items from A to B in a certain order (as in step 4) until the point totals are equal. The order is determined by going through the items in order of increasing point ratio. An item’s point ratio, fraction, is = A’s point value ÷ B’s point value. 3

Chapter 13: Fair Division The Adjusted Winner Procedure Example of the Adjusted Winner Procedure n Consider the application to business mergers of two companies. q Two companies: Glaxo Wellcome (GW) and Smith. Kline Beecham (SKB) q Success of a merger often turns out to be what deal-makers call social issues—high power, position, sacrifice, and status are often the most difficult to allocate. Applying the Adjusted Winner Procedure to a Merger This table shows which issues are n Each item is initially given to most important: the party that assigned it more Point Allocations Issues Glaxo Wellcome Smith. Kline Beecham Name 5 10 Headquarte rs 25 10 Chairman 35 20 CEO 15 35 Layoffs 20 25 Total 100 points: • GW placed more points on headquarters (25) and chairman (35); total = 60 • SKB is given name (10), CEO (35), and layoffs (25); total = 70 n Next, calculate which issue (or fraction of) to transfer from SKB to GW to equalize points. 4

Chapter 13: Fair Division The Adjusted Winner Procedure n Theorem: Properties of the Adjusted Winner Allocation For two parties, the adjusted winner procedure produces an allocation, based on each player’s assignment of 100 points over the items to be divided, that has the following properties: Ø The allocation is equitable: Both players receive the same number of points Ø The allocation is envy-free: Neither player would be happier with what the other received. Ø The allocation is Pareto-optimal: No other allocation, arrived at by any means, can make one party better off without making the other party worse off. Pareto optimality (also named after Vilfredo Pareto) is an extremely important property to economists. The order of transfer in step 4 of the adjusted winner procedure is so important because it guarantees that the outcome is Pareto-optimal. q 5

Chapter 13: Fair Division The Knaster Inheritance Procedure q q Proposed by Bronislaw Knaster in 1945, this is an auction scheme designed for estate settlement with many heirs, assuming that each heir has a large amount of cash at his/her disposal. Method for the Knaster Inheritance Procedure: n n q q First, it begins by having each player (independently) assign a dollar value (a “bid”) to the item or items to be divided, so as to reflect the absolute worth of each object to that player. The item is awarded to the person with the highest bid, and his/her “fair share” of the heir amount is subtracted from this bid. The remaining amount is put into a temporary kitty to be divided among the other heirs, according to his or her fair share. The allocation resulting from this procedure leaves each party feeling that he or she received a dollar value at least equal to his or her fair share (and often more so). It never requires the dividing or sharing of an object, but it may require that the players have a large amount of cash on hand. 6

Chapter 13: Fair Division Taking Turns q q With two parties, one party selects an object, then the other party selects one, then the first party again, and so on. Questions arise with taking turns: n How do we decide who goes first? q n Possible answers: Toss a coin or bid for the right to go first. Since choosing first is often quite an advantage, should the other party be compensated in some way? q Possible compensation could be extra choices at the next turn. Taking Turns – A fairdivision procedure in which two or more parties alternate selecting objects. n Should a player always choose his/her favorite from those that remain, or try to choose strategically to get better overall results? If a player chooses strategically, he/she could get better results. 8

Chapter 13: Fair Division Divide and Choose q q The origins of the divide and choose procedure date back thousands of years. The rules to the procedure are simple: Someone divides the object into two parts and the other person chooses first. Divide and Choose – A fair division procedure for dividing an object into two parts in any way that one desires and the other party chooses which-ever part he/she wants. The natural strategies of the divide and choose procedure are quite obvious: n The divider makes the two parts equal in his estimation. n The chooser selects whichever piece he feels is more valuable. Other strategic considerations may be relevant, such as the question Would you rather be the divider or the chooser? Not knowing the other’s preference, one would want to be the chooser. 10

Chapter 13: Fair Division Cake-Division Procedure: Proportionality n Cake-Division Procedure q q This procedure is used to divide and choose some object among three or more people, and cake is the metaphor used to help explain this procedure. The cake-division procedure involves finding allocations of a single object that is finely divisible. In this procedure, each player has a strategy that will guarantee his/her “satisfaction, ” even in the face of collusion by the others. To be “satisfied” means that we “think our piece is of size or value at least what we viewed as a fair share” or “we do not want to trade. ” 11

Chapter 13: Fair Division Cake-Division Procedure: Proportionality n Lone-Divider Method – Introduced by Hugo Steinhaus. A cake-division procedure that works for three players and produces an allocation that is proportional but not, in general, envy-free. q q n One cuts the cake and the other two players must “approve a piece” if they think it is the size of at least one-third. If the other two players “disapprove of a piece, ” then that piece can go to the cutter, or some pieces can be put back together and recut. Last-Diminisher Method – Introduced by Stefan Banach and Bronislaw Knaster. A cake division procedure for any number of players that produces an allocation that is proportional but not, in general, envy-free. q q q For four or more players, one person cuts the cake and hands off a piece to another player. The player examines it. If it looks fair, he passes it along to the next player. If it looks too big, he trims it first (puts the trimmed part back on the cake) and then passes it on (either unaltered or diminished). This continues down the line until all the cake has been distributed. 13

Chapter 13: Fair Division Cake-Division Procedure: The Problem of Envy n Problem of Envy q n In the lone-divider and last-diminisher methods, envy could easily exist among the players. n Example: The person who initially cuts the cake feels he is making the cake even. However, as the pieces are either put back together and recut, or trimmed and passed on, the original portions change, and so they may be perceived differently by the original cutter—envy may occur. Selfridge-Conway Envy-Free Procedure (Three Players) q q q This procedure involves constructively obtaining three pieces of cake through successive trimming by the players (and the trimmings can be allocated later). At the conclusion, each of the three people thinks he or she received a piece at least tied for the largest with this method. This procedure is envy-free, as well as proportional. 14