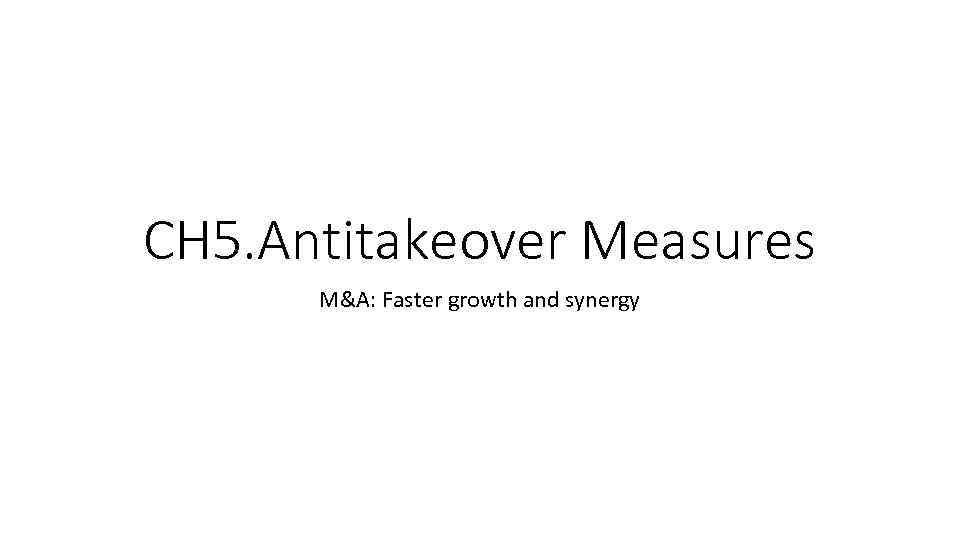 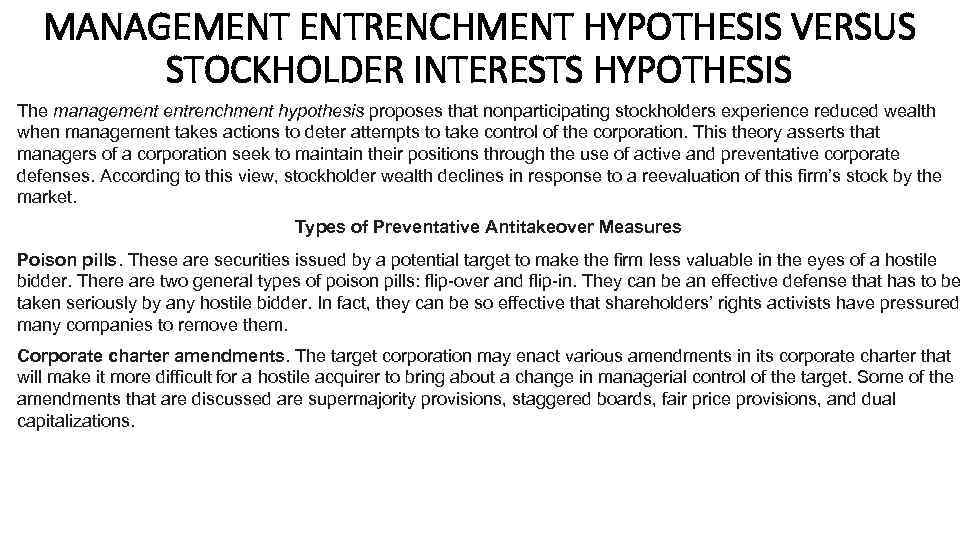 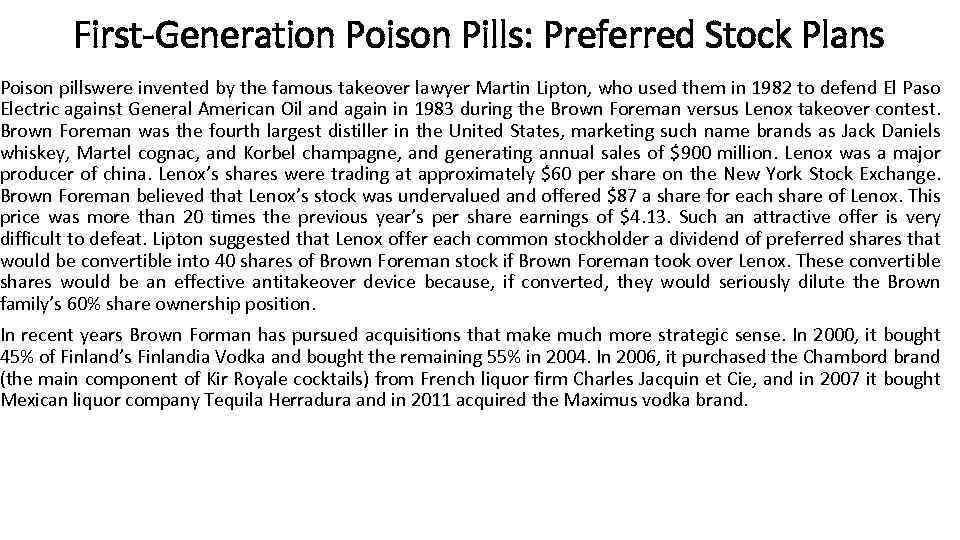 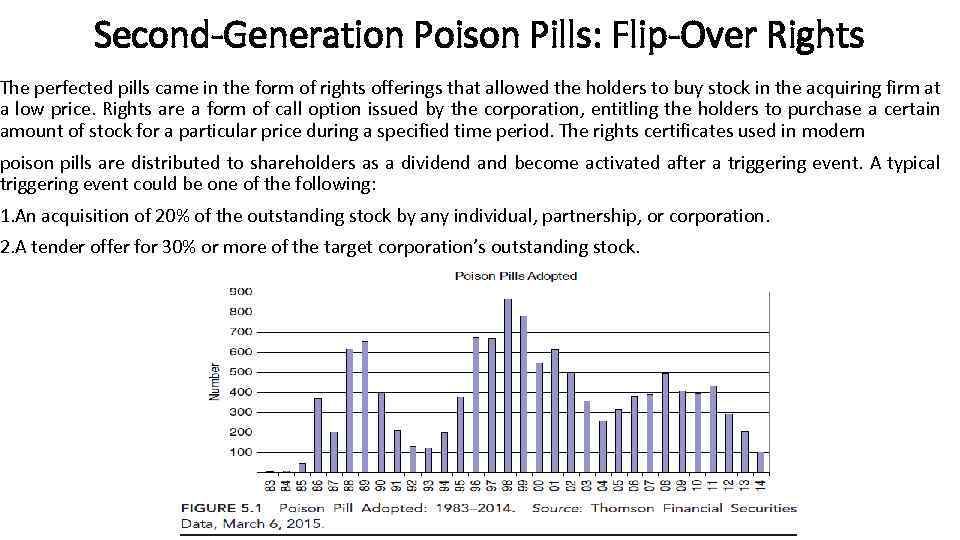 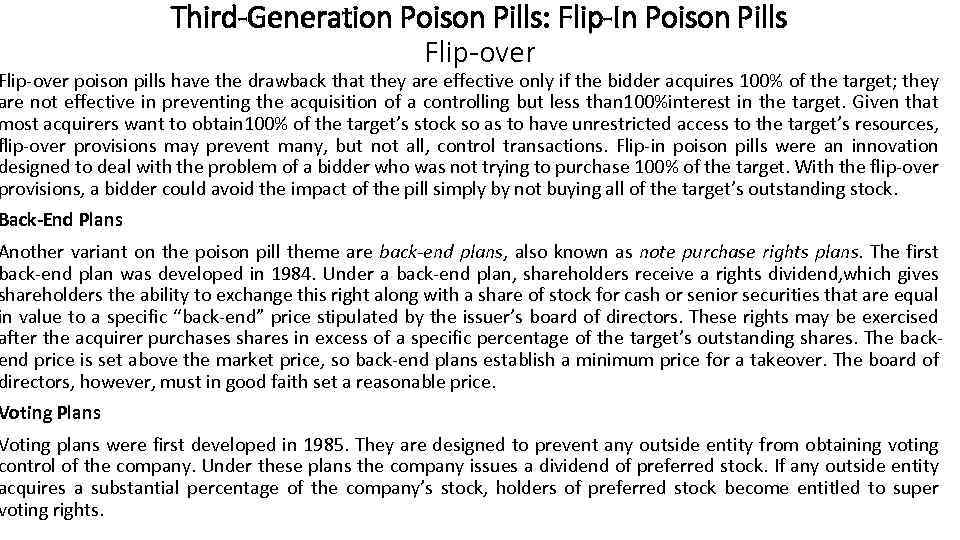 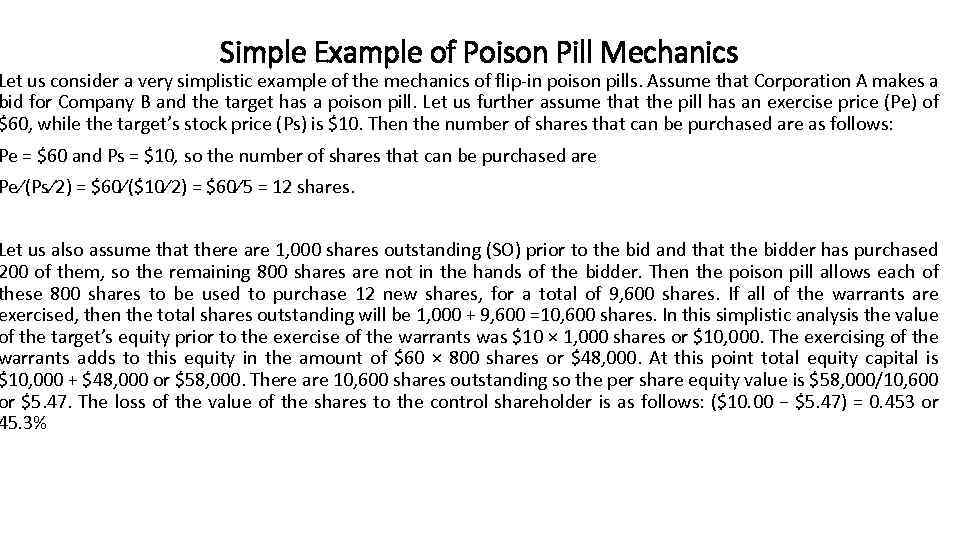 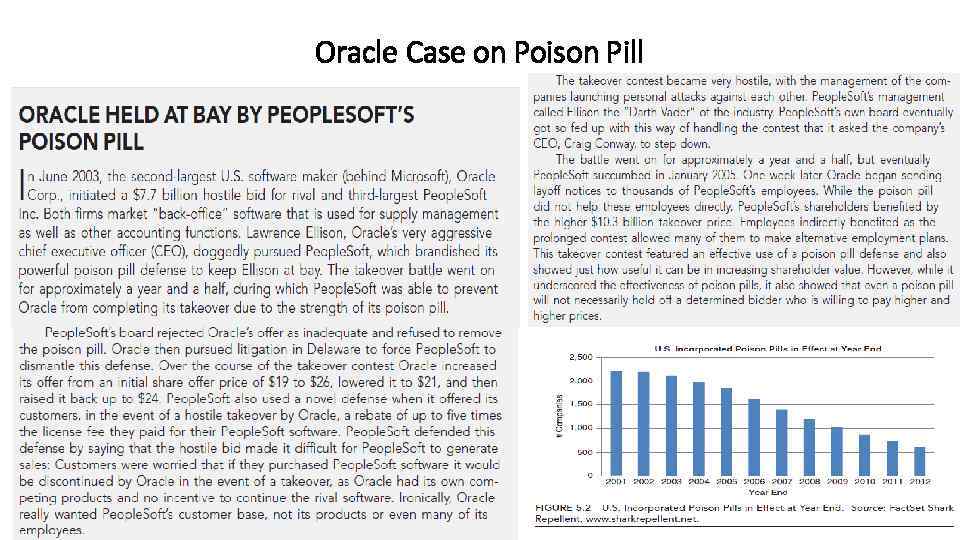 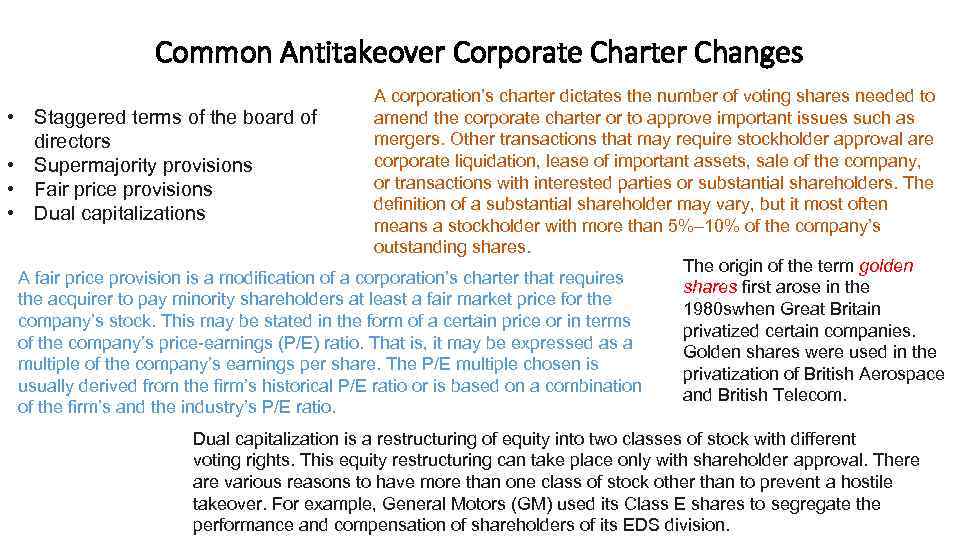 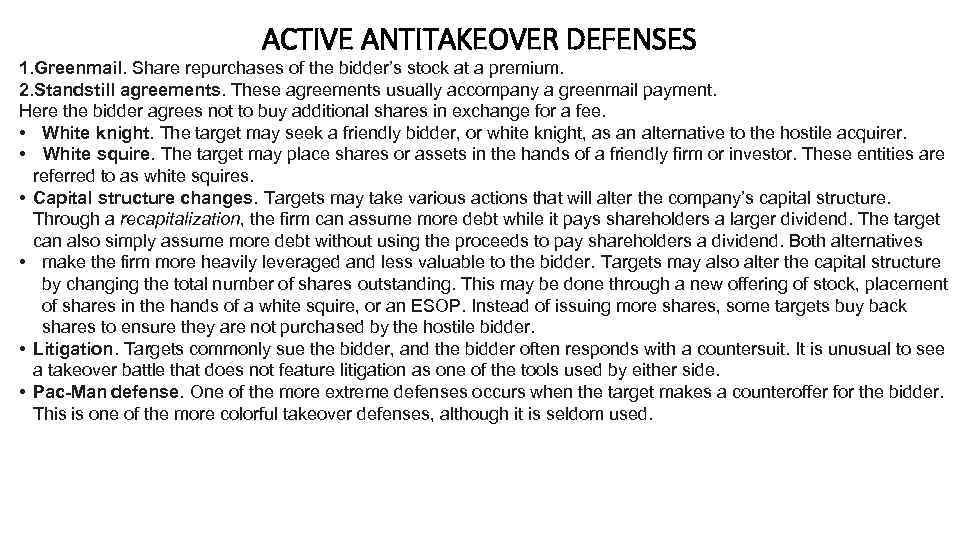 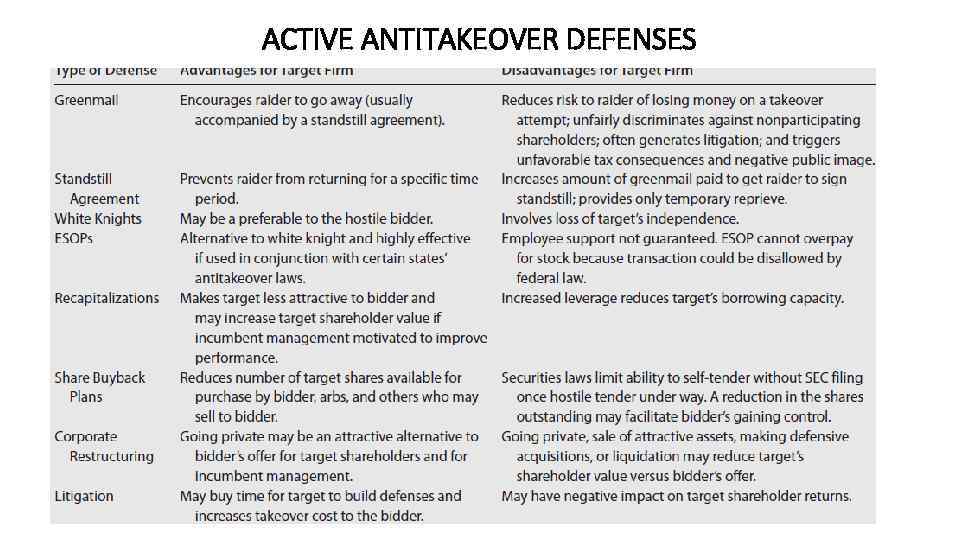 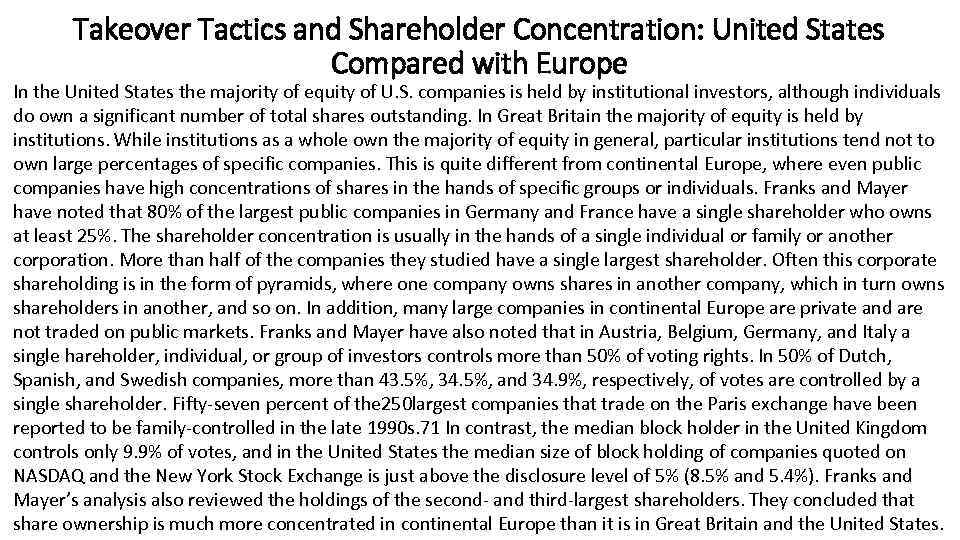 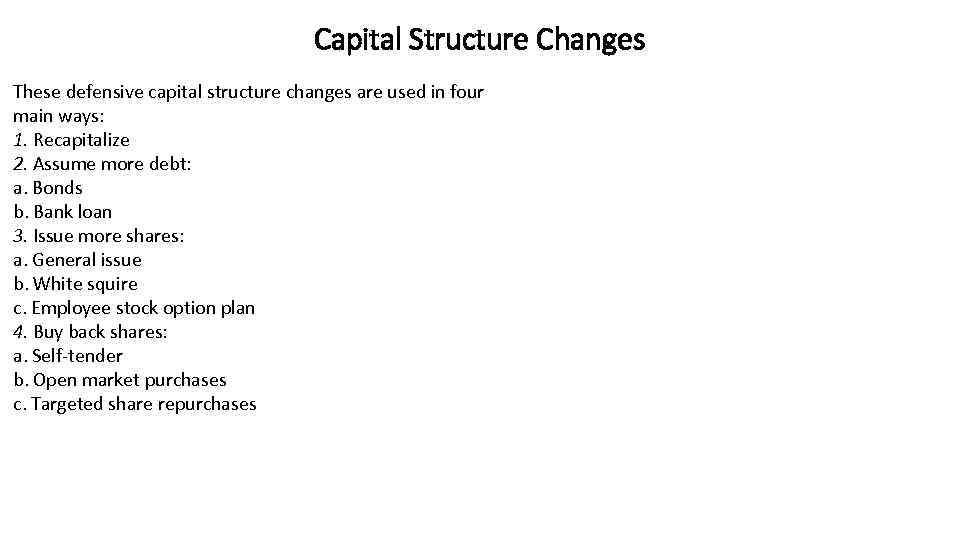 MANAGEMENT ENTRENCHMENT HYPOTHESIS VERSUS STOCKHOLDER INTERESTS HYPOTHESIS The management entrenchment hypothesis proposes that nonparticipating stockholders experience reduced wealth when management takes actions to deter attempts to take control of the corporation. This theory asserts that managers of a corporation seek to maintain their positions through the use of active and preventative corporate defenses. According to this view, stockholder wealth declines in response to a reevaluation of this firm’s stock by the market. Types of Preventative Antitakeover Measures Poison pills. These are securities issued by a potential target to make the firm less valuable in the eyes of a hostile bidder. There are two general types of poison pills: flip-over and flip-in. They can be an effective defense that has to be taken seriously by any hostile bidder. In fact, they can be so effective that shareholders’ rights activists have pressured many companies to remove them. Corporate charter amendments. The target corporation may enact various amendments in its corporate charter that will make it more difficult for a hostile acquirer to bring about a change in managerial control of the target. Some of the amendments that are discussed are supermajority provisions, staggered boards, fair price provisions, and dual capitalizations.

First-Generation Poison Pills: Preferred Stock Plans Poison pillswere invented by the famous takeover lawyer Martin Lipton, who used them in 1982 to defend El Paso Electric against General American Oil and again in 1983 during the Brown Foreman versus Lenox takeover contest. Brown Foreman was the fourth largest distiller in the United States, marketing such name brands as Jack Daniels whiskey, Martel cognac, and Korbel champagne, and generating annual sales of $900 million. Lenox was a major producer of china. Lenox’s shares were trading at approximately $60 per share on the New York Stock Exchange. Brown Foreman believed that Lenox’s stock was undervalued and offered $87 a share for each share of Lenox. This price was more than 20 times the previous year’s per share earnings of $4. 13. Such an attractive offer is very difficult to defeat. Lipton suggested that Lenox offer each common stockholder a dividend of preferred shares that would be convertible into 40 shares of Brown Foreman stock if Brown Foreman took over Lenox. These convertible shares would be an effective antitakeover device because, if converted, they would seriously dilute the Brown family’s 60% share ownership position. In recent years Brown Forman has pursued acquisitions that make much more strategic sense. In 2000, it bought 45% of Finland’s Finlandia Vodka and bought the remaining 55% in 2004. In 2006, it purchased the Chambord brand (the main component of Kir Royale cocktails) from French liquor firm Charles Jacquin et Cie, and in 2007 it bought Mexican liquor company Tequila Herradura and in 2011 acquired the Maximus vodka brand.

Second-Generation Poison Pills: Flip-Over Rights The perfected pills came in the form of rights offerings that allowed the holders to buy stock in the acquiring firm at a low price. Rights are a form of call option issued by the corporation, entitling the holders to purchase a certain amount of stock for a particular price during a specified time period. The rights certificates used in modern poison pills are distributed to shareholders as a dividend and become activated after a triggering event. A typical triggering event could be one of the following: 1. An acquisition of 20% of the outstanding stock by any individual, partnership, or corporation. 2. A tender offer for 30% or more of the target corporation’s outstanding stock.

Third-Generation Poison Pills: Flip-In Poison Pills Flip-over poison pills have the drawback that they are effective only if the bidder acquires 100% of the target; they are not effective in preventing the acquisition of a controlling but less than 100%interest in the target. Given that most acquirers want to obtain 100% of the target’s stock so as to have unrestricted access to the target’s resources, flip-over provisions may prevent many, but not all, control transactions. Flip-in poison pills were an innovation designed to deal with the problem of a bidder who was not trying to purchase 100% of the target. With the flip-over provisions, a bidder could avoid the impact of the pill simply by not buying all of the target’s outstanding stock. Back-End Plans Another variant on the poison pill theme are back-end plans, also known as note purchase rights plans. The first back-end plan was developed in 1984. Under a back-end plan, shareholders receive a rights dividend, which gives shareholders the ability to exchange this right along with a share of stock for cash or senior securities that are equal in value to a specific “back-end” price stipulated by the issuer’s board of directors. These rights may be exercised after the acquirer purchases shares in excess of a specific percentage of the target’s outstanding shares. The backend price is set above the market price, so back-end plans establish a minimum price for a takeover. The board of directors, however, must in good faith set a reasonable price. Voting Plans Voting plans were first developed in 1985. They are designed to prevent any outside entity from obtaining voting control of the company. Under these plans the company issues a dividend of preferred stock. If any outside entity acquires a substantial percentage of the company’s stock, holders of preferred stock become entitled to super voting rights.

Common Antitakeover Corporate Charter Changes A corporation’s charter dictates the number of voting shares needed to amend the corporate charter or to approve important issues such as • Staggered terms of the board of mergers. Other transactions that may require stockholder approval are directors corporate liquidation, lease of important assets, sale of the company, • Supermajority provisions or transactions with interested parties or substantial shareholders. The • Fair price provisions definition of a substantial shareholder may vary, but it most often • Dual capitalizations means a stockholder with more than 5%– 10% of the company’s outstanding shares. The origin of the term golden A fair price provision is a modification of a corporation’s charter that requires shares first arose in the acquirer to pay minority shareholders at least a fair market price for the 1980 swhen Great Britain company’s stock. This may be stated in the form of a certain price or in terms privatized certain companies. of the company’s price-earnings (P/E) ratio. That is, it may be expressed as a Golden shares were used in the multiple of the company’s earnings per share. The P/E multiple chosen is privatization of British Aerospace usually derived from the firm’s historical P/E ratio or is based on a combination and British Telecom. of the firm’s and the industry’s P/E ratio. Dual capitalization is a restructuring of equity into two classes of stock with different voting rights. This equity restructuring can take place only with shareholder approval. There are various reasons to have more than one class of stock other than to prevent a hostile takeover. For example, General Motors (GM) used its Class E shares to segregate the performance and compensation of shareholders of its EDS division.

ACTIVE ANTITAKEOVER DEFENSES 1. Greenmail. Share repurchases of the bidder’s stock at a premium. 2. Standstill agreements. These agreements usually accompany a greenmail payment. Here the bidder agrees not to buy additional shares in exchange for a fee. • White knight. The target may seek a friendly bidder, or white knight, as an alternative to the hostile acquirer. • White squire. The target may place shares or assets in the hands of a friendly firm or investor. These entities are referred to as white squires. • Capital structure changes. Targets may take various actions that will alter the company’s capital structure. Through a recapitalization, the firm can assume more debt while it pays shareholders a larger dividend. The target can also simply assume more debt without using the proceeds to pay shareholders a dividend. Both alternatives • make the firm more heavily leveraged and less valuable to the bidder. Targets may also alter the capital structure by changing the total number of shares outstanding. This may be done through a new offering of stock, placement of shares in the hands of a white squire, or an ESOP. Instead of issuing more shares, some targets buy back shares to ensure they are not purchased by the hostile bidder. • Litigation. Targets commonly sue the bidder, and the bidder often responds with a countersuit. It is unusual to see a takeover battle that does not feature litigation as one of the tools used by either side. • Pac-Man defense. One of the more extreme defenses occurs when the target makes a counteroffer for the bidder. This is one of the more colorful takeover defenses, although it is seldom used.

Takeover Tactics and Shareholder Concentration: United States Compared with Europe In the United States the majority of equity of U. S. companies is held by institutional investors, although individuals do own a significant number of total shares outstanding. In Great Britain the majority of equity is held by institutions. While institutions as a whole own the majority of equity in general, particular institutions tend not to own large percentages of specific companies. This is quite different from continental Europe, where even public companies have high concentrations of shares in the hands of specific groups or individuals. Franks and Mayer have noted that 80% of the largest public companies in Germany and France have a single shareholder who owns at least 25%. The shareholder concentration is usually in the hands of a single individual or family or another corporation. More than half of the companies they studied have a single largest shareholder. Often this corporate shareholding is in the form of pyramids, where one company owns shares in another company, which in turn owns shareholders in another, and so on. In addition, many large companies in continental Europe are private and are not traded on public markets. Franks and Mayer have also noted that in Austria, Belgium, Germany, and Italy a single hareholder, individual, or group of investors controls more than 50% of voting rights. In 50% of Dutch, Spanish, and Swedish companies, more than 43. 5%, 34. 5%, and 34. 9%, respectively, of votes are controlled by a single shareholder. Fifty-seven percent of the 250 largest companies that trade on the Paris exchange have been reported to be family-controlled in the late 1990 s. 71 In contrast, the median block holder in the United Kingdom controls only 9. 9% of votes, and in the United States the median size of block holding of companies quoted on NASDAQ and the New York Stock Exchange is just above the disclosure level of 5% (8. 5% and 5. 4%). Franks and Mayer’s analysis also reviewed the holdings of the second- and third-largest shareholders. They concluded that share ownership is much more concentrated in continental Europe than it is in Great Britain and the United States.